“Ugh, Jc, aren't you supposed to review some single-A games that we have never heard of?” Shut up, I finished Echo yesterday, I have to capitalize on that! Especially when it tricked me into playing a stealth-puzzle game.

The platinum blonde heroine of the game is En. She wakes up after a 100 year stasis in a space ship controlled by London, an AI. London isn't happy: to retrieve En was the job of Foster, the human that was his only friend. Foster didn't come back – but En did, wounded, clutching his lighter and demanding London to take her to a planet at coordates where no planet is supposed to be. And so they set off on the hunt of the mystical Palace, which, according to the beliefs of En's people, would bring Foster back from the dead. 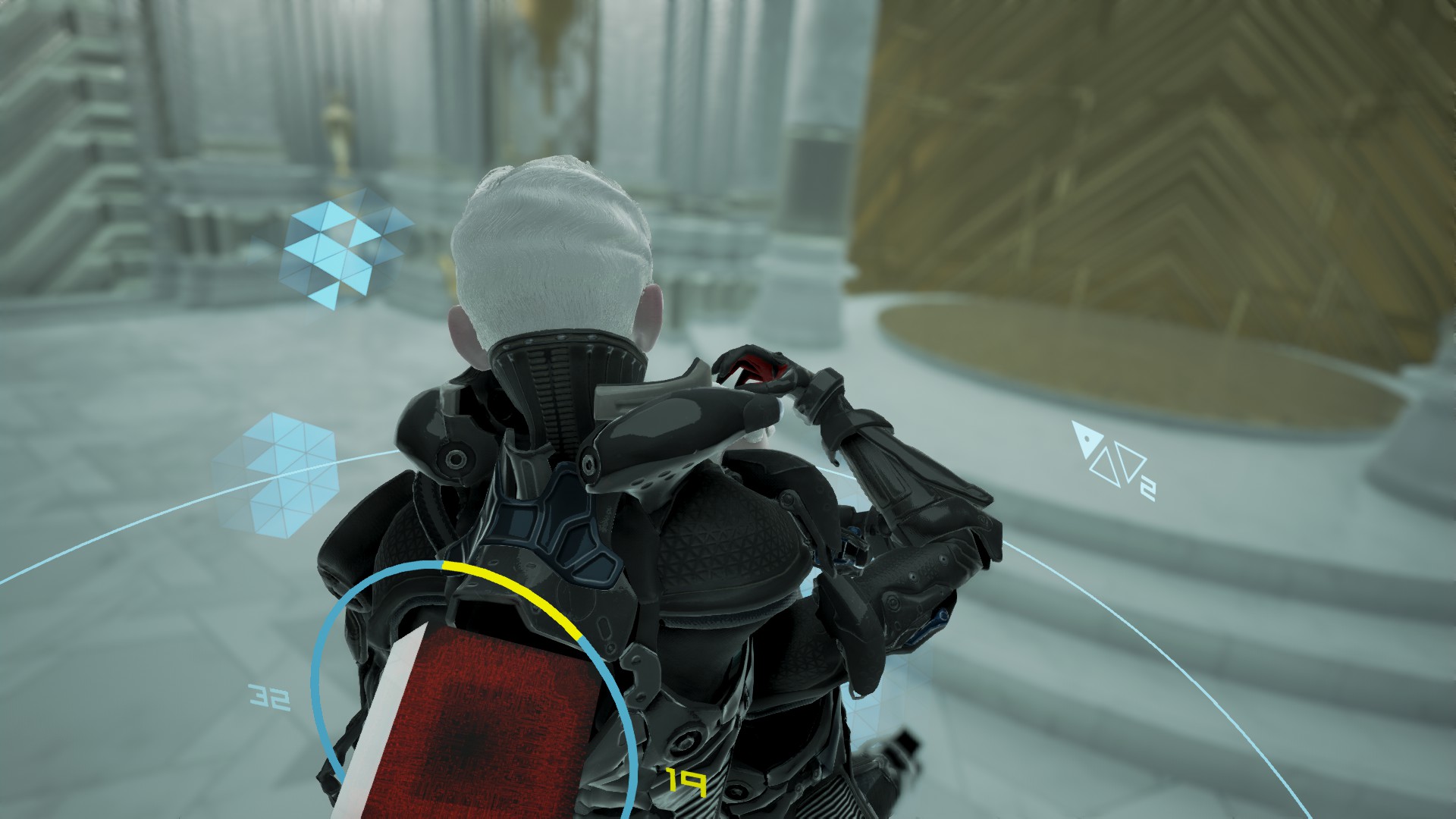 'Choke-4-Life' was not the most well received of charities.

En finds herself in the Palace: an endless and overblown version of something akin to Versailles. Imagine endless halls of columns, comfy chairs and foot rests, fancy tables and other gilded stuff. Unfortunately, those same halls are soon populated by echoes, copies of En that are hellbent on killing her. Lucky for us, they're kinda stupid and go down from one hit from the pistol. Heck, you can use one shot to down as many of them as you can line up!

So this game is in third person, as we pilot En in Foster's suit (his name tag is visible on the left shoulder) while the suit prevents her from doing stupid stuff like jumping to her death (and, more importantly, preventing the developers from coding any interactions that aren't fired by reaching an interactive point and pressing a button). The suit has an energy gouge – it's depleted on long jumps and by firing the pistol. You'll always have at least one “piece” of power, since suit regenerates as much (but not more).

Unfortunately, ECHO isn't a fighting game. The pistol doesn't fire that fast and only the most diligent upgrade hunters will have an energy gouge of 6 or more (which means six shots, buster). Oh, and the planet goes cycles of activity before going dark and rebooting in a second of blind darkness. Rebooting resurects the echoes. More than that, it teaches them actions that you executed the previous light cycle (while also wiping their memory of moves you tought them earlier). That's how echoes learn to jump from great heights, open doors, vault barriers, run... as well as shooting and more. 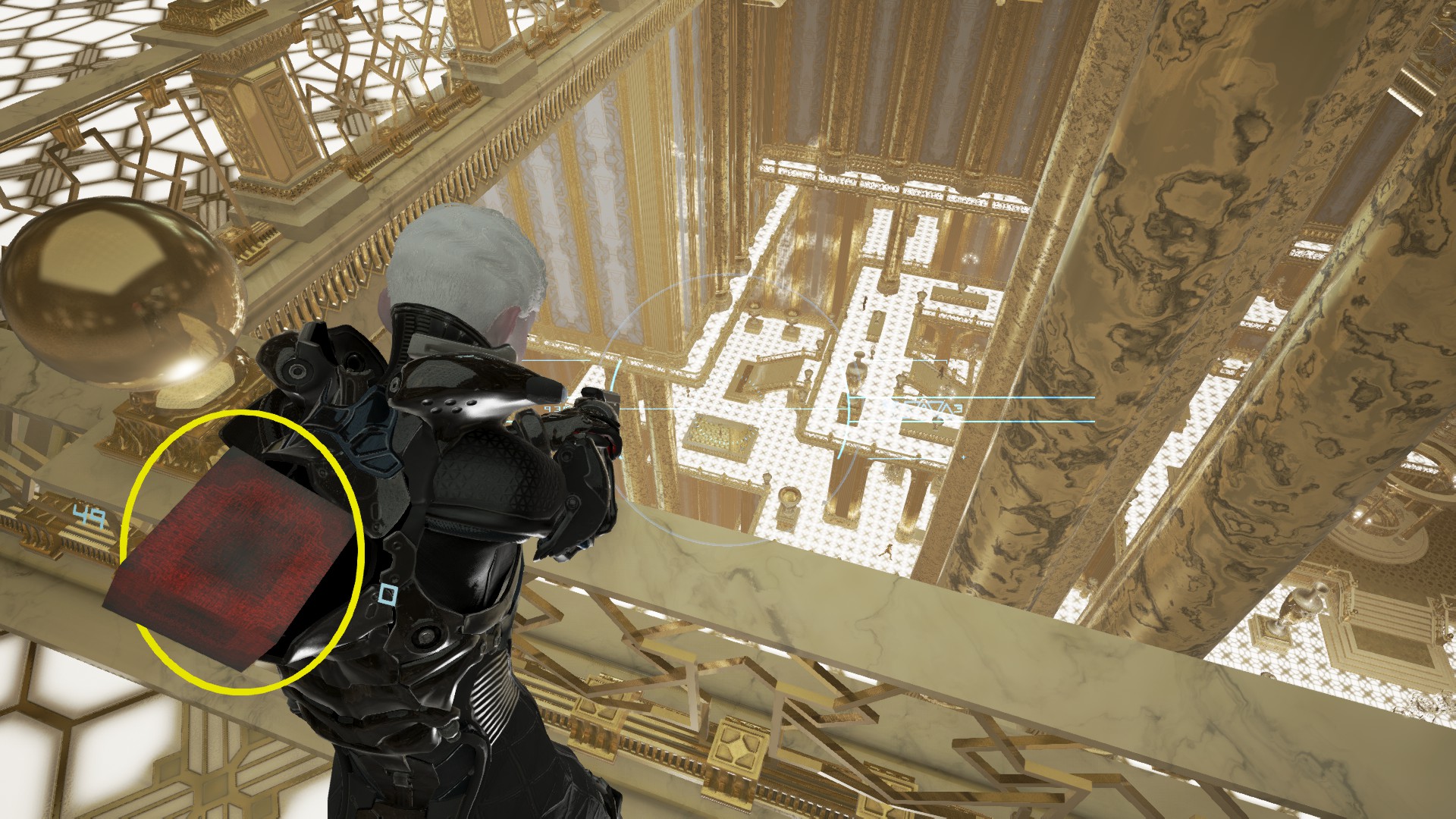 ECHO isn't a game where you teach enemy how to kill you, like Kotaku implies. ECHO is a stealth game where you are constantly thinking how to starve the enemy of resources; how to leave the echoes dumb and stranded behind doors they don't know how to use. The “night” period that precedes the full restart triggers only when enough actions are recorded and is the only time when you can use actions without the fear of being recorded.

That's why you'll execute your riskiest stuff when the night falls. You'll sprint over water without fear of teaching echoes that this isn't GTA III and water isn't deadly. You'll shoot pursuers knowing that this won't show them how to shoot you. However, you will not be able to keep them fully stupid. En will teach her doppelgangers how to open doors or to execute stealth kills while simple mucking about. After all, those things aren't that dangerous to you – though it's hilarious to get stealth killed by an echo that caught you unawares or have an echo smash your head in with a glowing crystal ball, just like you did to one of her “sisters” the previous light cycle. 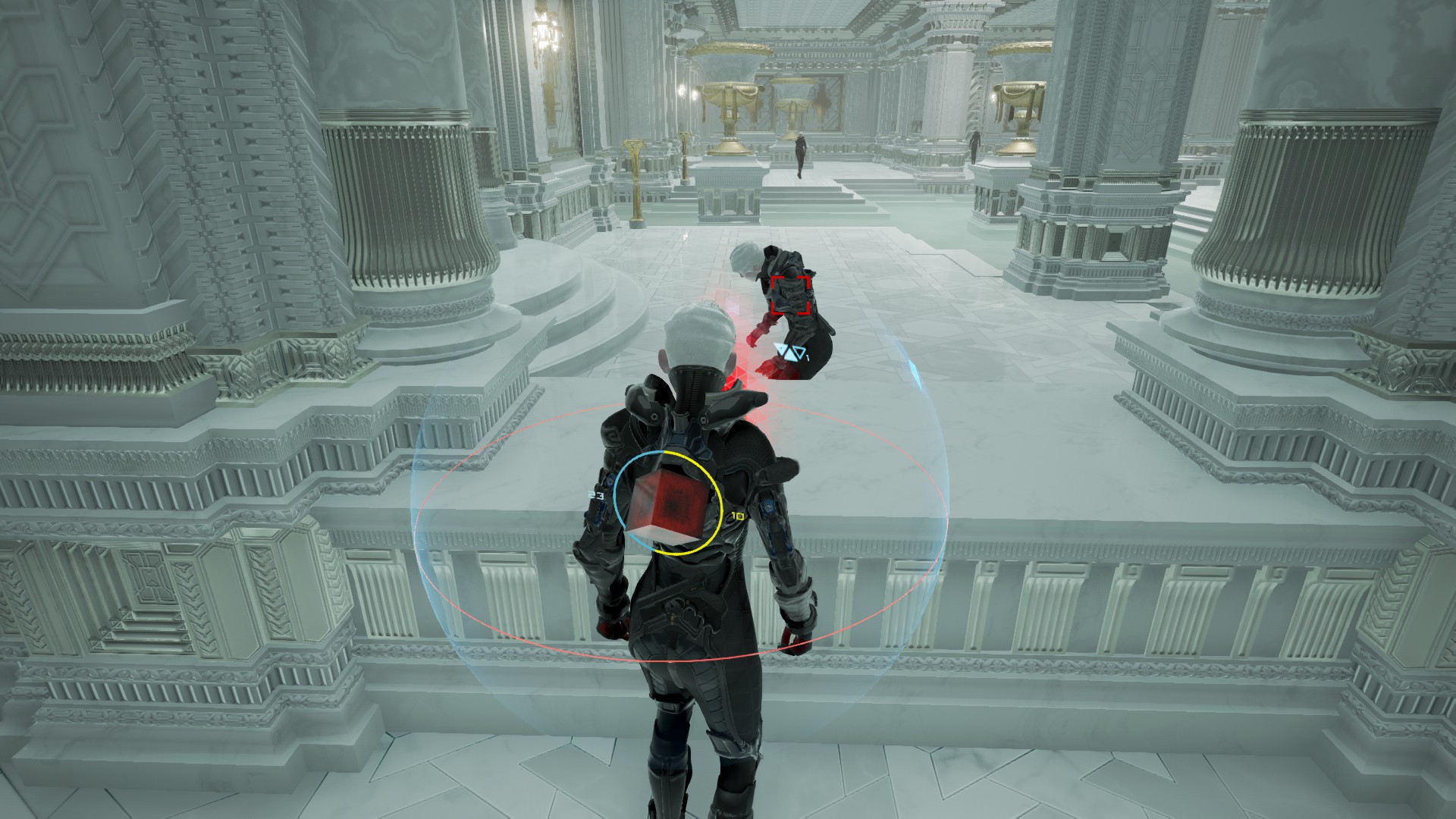 So, of course, a rare puzzle will involve teaching the echoes how to do specific stuff – mostly, you'll be avoiding giving them too many tools at once. The fact that these echo puzzles exist is kind of unsurprising, and it's both perplexing and pleasant that they only appear once or twice for every specific use scenario. We now know that they knew how to implement that, but didn't bother us with that, instead focusing on sneaking and choking women that look identical to you.

And there will be a lot of choking. There are only a few ways that En can kill echoes, and all of them require some forethought. Pistol eats energy, alerts a lot of those damn echoes, and teaches them how to shoot. If you're out of ammo or don't want to risk it, you can only push back any echoes that are rushing in – sure, they fall on their asses (unless you push them over the railing, which is super fun), but they get up fast, and your stamina bar only allows you to give you three shoves before you're done. If En wants to kill an echo, she has to either sneak up on one and choke her dead (not entirely silent, but I don't think I ever alarmed others that way) or to smash her over the head with a crystal ball (which dutifully shatters on impact). And mind you, those only work on isolated echoes, so agroing several of them is never a good idea. 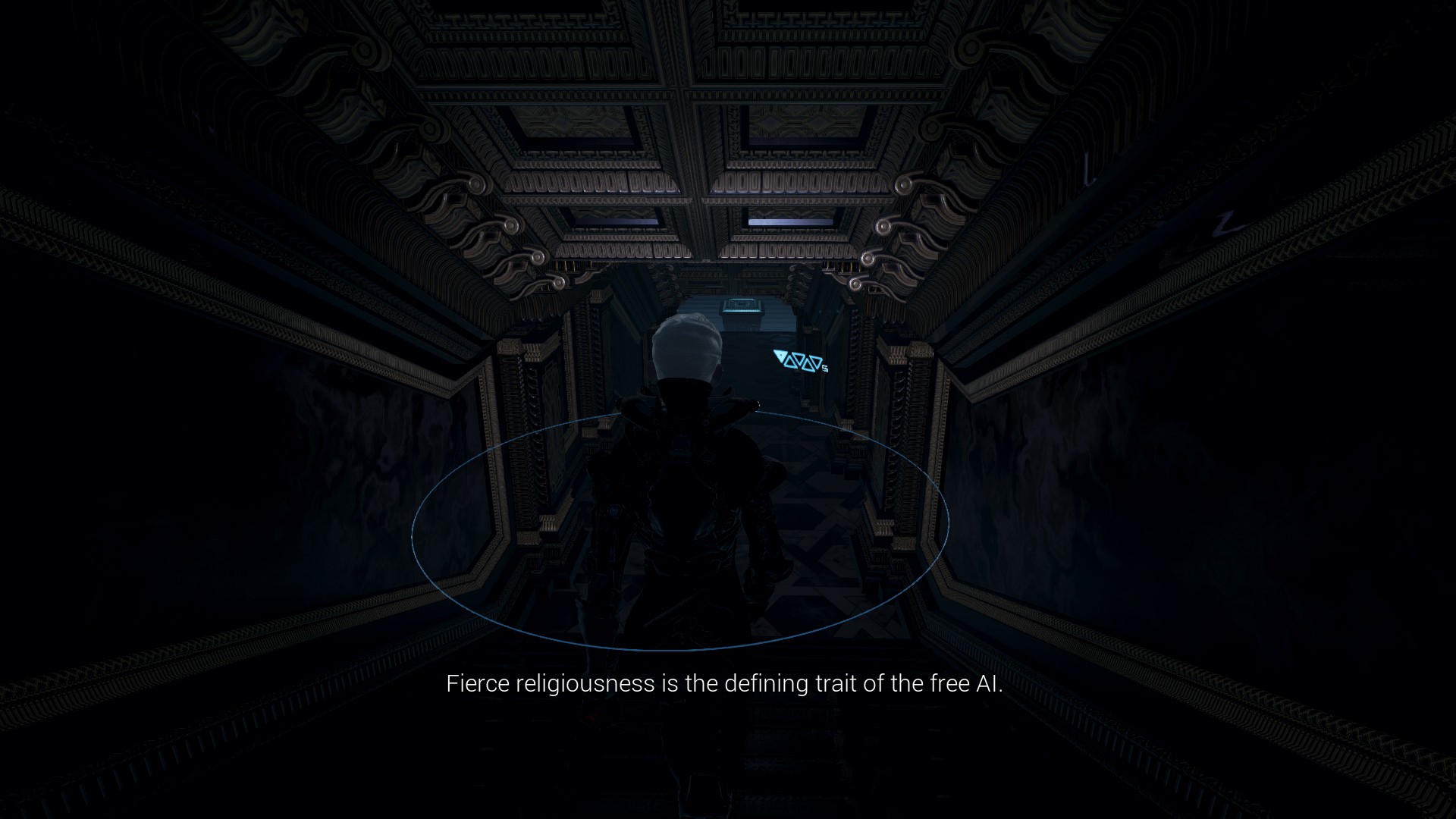 Free AIs suffer not the redditor to live.

En has only two “healthpoints” herself – she can fight off up to two echoes (three's a death sentence) groping her at the same time or withstand one pistol blast before going into healing mode. And when you're healing, any attack is going to be fatal.

So ECHO is very much about sneaking and distracting echoes – by shouting, throwing crystal balls and teaching them to play the piano or eat fruit – while not giving them tools to make your life difficult. This never gets old, even if the game has only two choking animations – one for every shoulder the camera could be looking over – and one or two enemy models. Even if the the echo Ens are identical save for the texture – some of the echoes are rougher, less detailed – you never get tired fighting and outwitting them. If you teach them such superfluous stuff like playing the harp (yes, I managed to get the achievement for echoes playing harp and piano at the same time, though it was accidental) or shouting, it adds a lot ot the amusement. The environments stay surprisingly fresh, too - but more about that later.

And the puzzles don't really get stale, either. For one, the unique puzzles – where you need to manipulate echos, for example – are only done once or twice. This means that they remain as something that stands out from the regular run of the mill sneak-and-choke action. I believe not many other games would have resisted the temptation to make them a feature. This would only serve to weaken the game, as you would meet the challenge with a tired“oh, we're introducing this as a gameplay feature now." 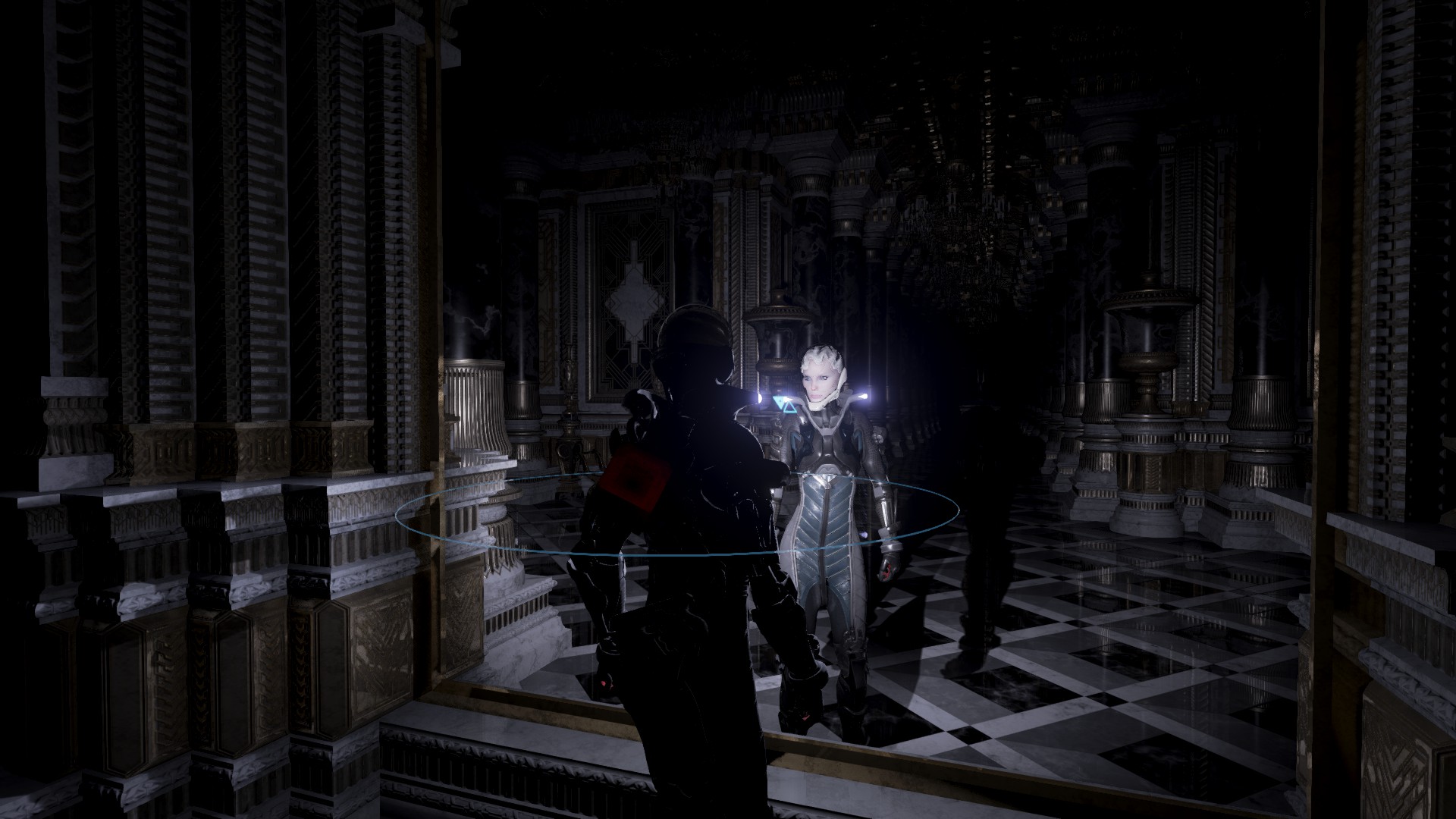 The best looking gal on the entire planet.

If ECHO has a weak point, it's in the collectibles. They come in two, maybe three flavors. First, you have Voices – statues of tuning forks, significant to En's people, the Resourcefuls. In-universe, the suit collects the notes they give off and puts them in sequence to get decoded in the between-levels elevator. The more you collect, the clearer the image of the verses of Voices of Eternity you get, which makes this the most story-relevant of collectibles. You can also collect bits that upgrade the power capacity of your suit - get six and you have yourself an another cell.

The most meta collectible is the orbs at the end-of-level puzzles to unlock the super-elevators. All of those orb areas provide their own unique challenges and details, and you only need to collect half. However, you can unlock new game+ stuff if you collect all of them in the area. Which is a lot easier to do if you just have the patience and know your SCIENCE SAVE POINT GATE locations. Patience is the name of the game anyways and you will have learned while moving at En's natural pace so as not to teach echoes how to run.

ECHO is brilliant from when you look at it from the perspective of game development. Remember TES: Oblivion and how all of its caves were boring as all hell? Well, if ECHO developers were to do those caves, they would change the color of the textures and make each cave slightly different by adding a new detail in every new one (and it would be a small detail), setting the mood via architecture and even go meta by giving them meaningful names via Steam Achievement announcements (and the level selection menu that only noticed after the game). This is an amazing achievement in game design as ECHO uses very few assets in both model and texture sense and still manages to make an engrossing 8 hour game. No wonder the end game titles are almost “one crazy man made this game” short, I love it. 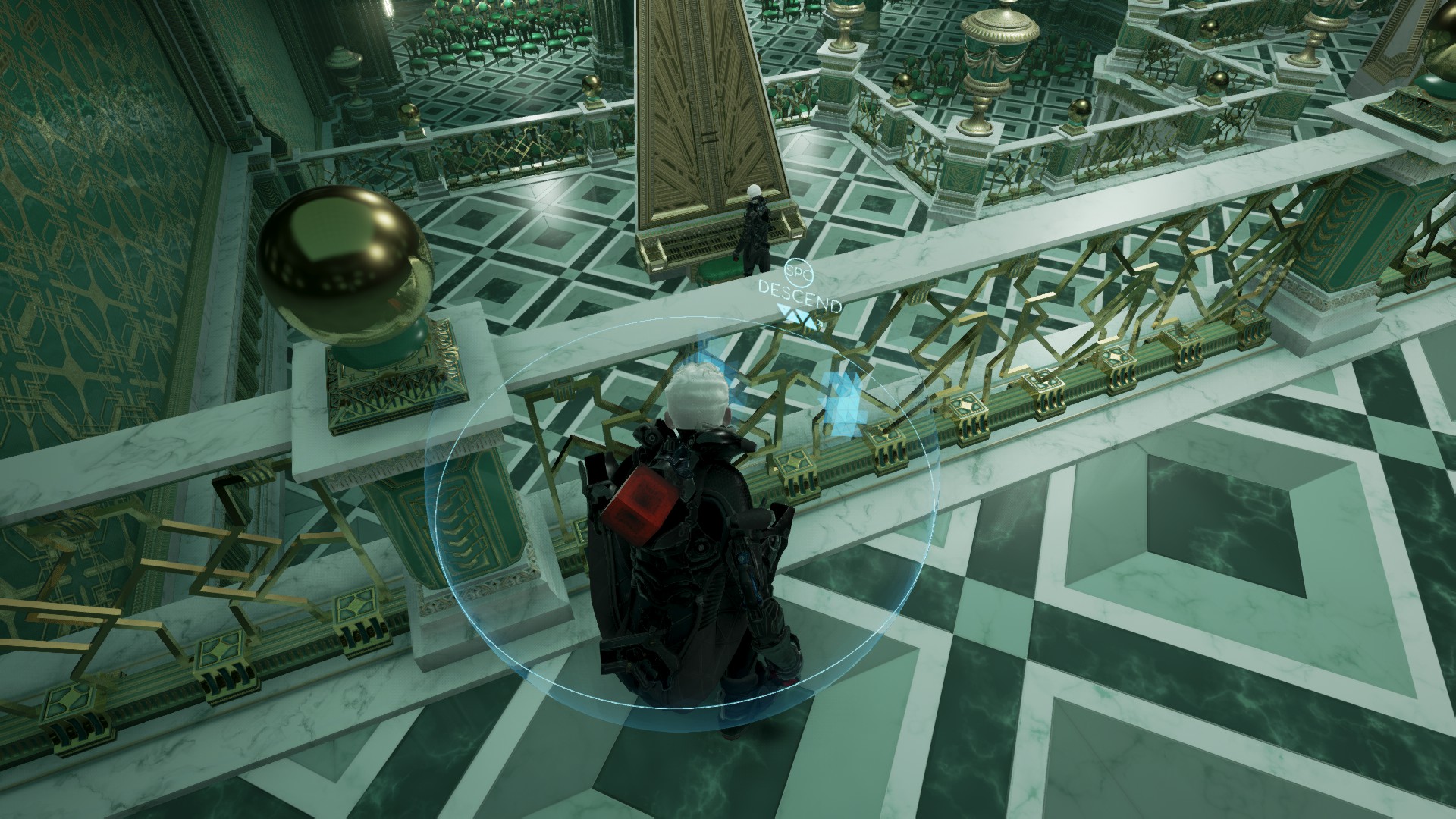 You play, I choke.

Same goes for the audio design. Only two voice actors are at play and they carry the game the same way Logan Cunnigham carried Bastion. En has very unique inflections to her voice while London is more of straight man (AI) to contrast to her cultish upbringing. If there's one weakness to the writing, is that you know perfectly well when the exposition dialogue will come, as it mostly happens while En walks slowly through the areas between levels (they're sorta like when you get outside of the puzzle rooms in Portal). No enemies means nothing can break the flow. Yet I still enjoyed it immensely.

Normally, I don't have much to say about audio in my reviews, since I don't really have an ear for music. But in this game, almost everything is perfect, which includes the sounds. For example, you might notice that the smaller, non-plot-relevant elevator play a bit of doves cooing when they arrive. The sound of crystal balls breaking is sharp and crisp. Shouting echoes are just amusing - and En "teaching" them those phrases sounds fantastic. The music is great as it takes themes of mystical space from Endless Space, but the mysticism is comes from how strange those super advanced space civilizations are. There's no hint of that excentricity in, say, Star Trek, where Space Humans are just clean cut idealized USA in space. No, this is a somewhat hard-sci fi unniverse that is inhabited by bizzare people whose weirdness has been enabled and empowered by the level of technology accessible to them. 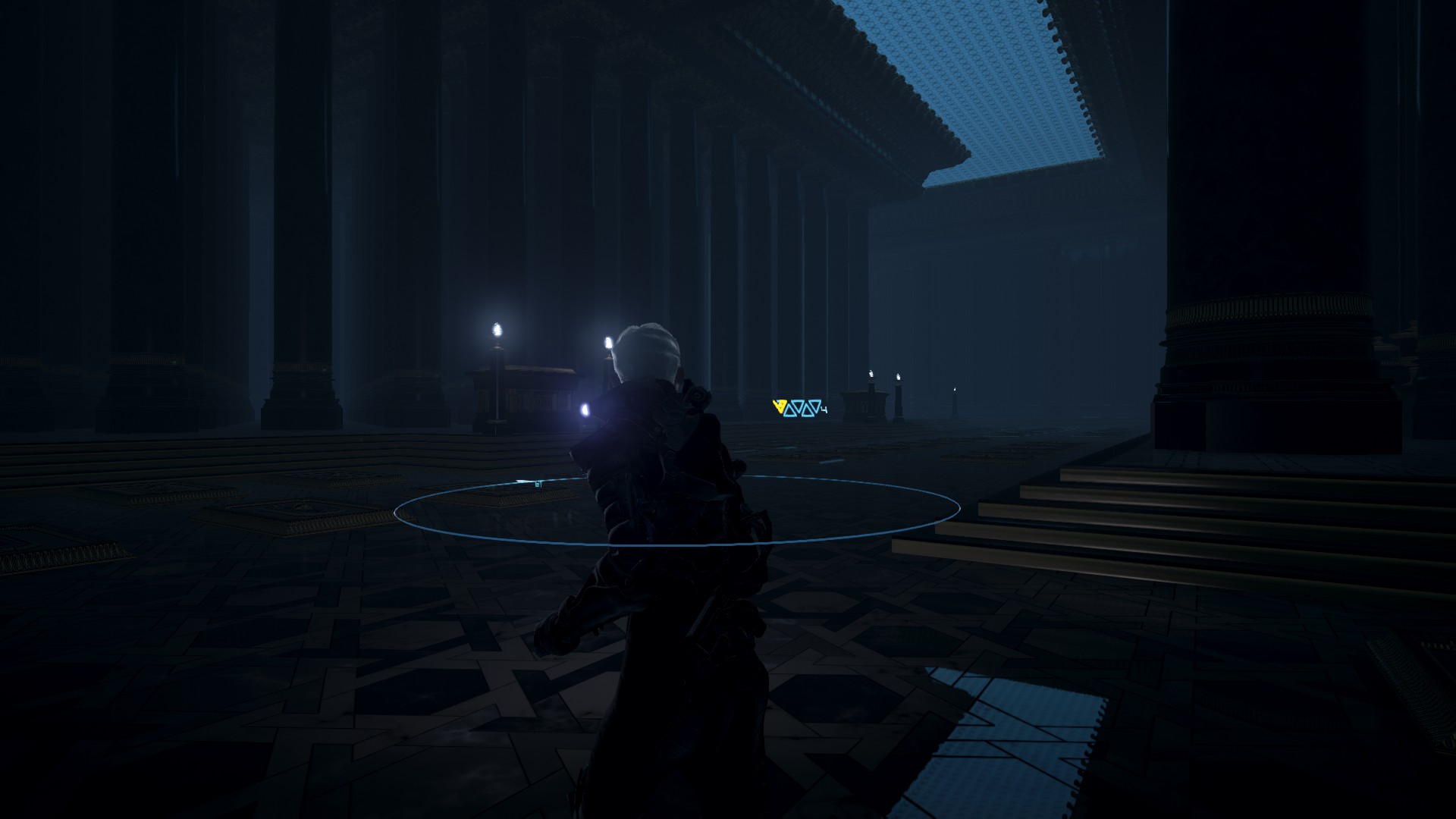 I wonder what this level is about!

It's an amazing joint effort of level designers who built a world hollowed out by rich weirdoes, of plot writers who drip feed and imply the setting other than stating everything outright, and of composers who took the best and most memorable parts of Endless Space sountrack to whip up something inspired.

ECHO is an amazing achievement in stealth minimalist design. And I don't mean “stealth” in “Rule 36 Sam Fisher” way: they used their genius to disguise the fact that they wove a game using basically a single character model assets recolored and reused for the entire experience. Palette swap this isn't, because it never feels tired, and even if you get smart to the trick, you feel immense respect for the developers. That and observing echoes crouch and creep about because they learned stealth is hilarious.