7:37 PM on 09.25.2007 (server time)    0
As always, I have No More Heroes on the mind. For those that don't know, the game is being produced, written, and directed by Suda 51, friend to Metal Gear creator Hideo Kojima, Resident Evil creator Shinji Mikimi, and Smash Bros creator Masahiro Sakurai. These are the four most creative guys in gaming, and it's no suprise that they hang out and make games together.

Out of the four, Suda is by far the weirdest, and also the least commercially successful. I think that may change with No More Heroes. The game is looking to combine all the best elements of sandbox games and brawlers, but with a visual style that's "balls to the walls" classy.

No More Heroes may just do for the 40 Year Old Virgin what GTA: Vice City did for 80's mafia movies fans and GTA:San Andreas did for wanna-be 90's gangster rap. 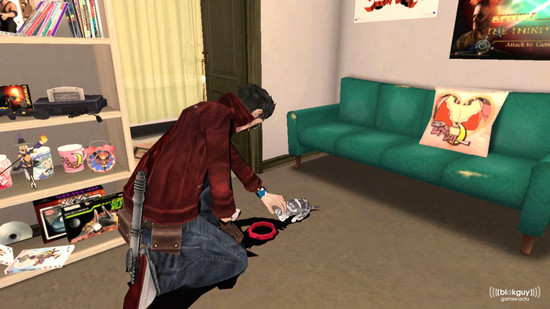 Has this sort of parady/tribute to the mordern day bacholor nerd ever been so overt and promenant in a video game before? Not to my knowledge.

This is truly post modern shit we're talking here. Travis Touchdown is the kind of guy who would actually play No More Heroes. In this game, he's truly living the dream.

Do you think Mario would ever play a Mario game, Master Cheif a Halo game, or Snake a Metal Gear Solid game? They'd all be to busy doing hero stuff. But not Travis. He's a fucking nerd, just like the rest of us.

And it's about time. It takes a lot of guts to proudly display to the world that you are a hopeless geek in the way that Travis does. He's not ashamed to own a kitten instead of a rotwieler. He likes girls...

...but he clearly doesn't feel a need to comprimise his tastes to get them in the sack.

That, my friends, takes true substance of character. That takes real balls.

I know Suda 51 wasn't planning for this game to have much of a message, but like it or not, it's sending one to me already, and it's not even out yet.

Fast forward to 5:45min for special Tay Zonday cameo, and up to 5:05min for the message that I speak of.