One of the biggest themes in John Carpenter's The Thing – and the much inferior game that followed it – is mistrust. Who can you rely on when any of your colleagues might be infected and taken over by alien body horrors? So yeah, Distrust, a game about navigating an Antarctic base beset by mysterious alien troubles, has none of that. However, it's still a very good game.

The story is cut out with the world's busiest cookie cutter. You have a scientific base do doing Science (TM) in the Antarctic when they uncover something (aliens, they uncover aliens). Soon enough, strange stuff starts happening and the base calls for help. Aid is soon to arrive; unfortunately, it's flown in via a helicopter, video games' deadliest mode of transport. Only two (or three) survivors make it out of the wreck. They are faced with an empty they will have to explore to survive and escape. 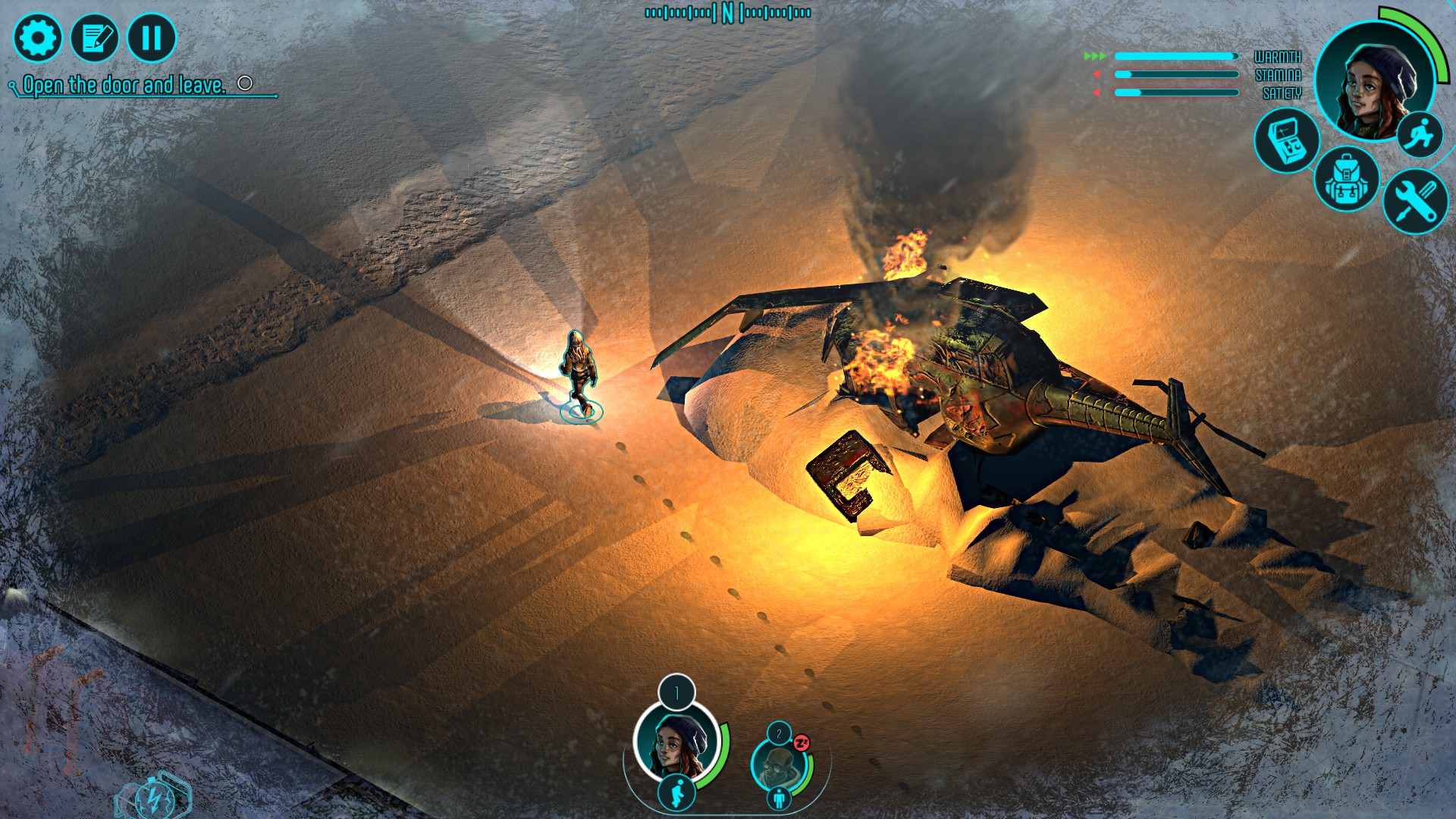 And hey, the flaming helo crash site actually gives off heat! This is important because your survivors have three needs: warmth, sleep, and food. Run out of either, and bad things start happening (also, health may start draining slowly). Each character (you choose a pair at the start of the game) has different stats (for cold resistance, walking and running speeds), as well one special trait, which range from “really resistant to cold” to “has a tool box.” So some survivors might be better at either withstanding the elements or fulfilling the team's needs than others. For example, the hipster foodie girl creates a protein shake in addition to any food she makes... even when she's brewing coffee. Don't ask, it's a hipster thing.

So the main goal of your future frozen corpses is to travel from one fenced base area to another, and to eventually escape. Each enclosure presents a new riddle, as the fenced gates can be locked in some near-Resident Evil-esque ways, requiring you to throw timed switches and such. However, keeping your dudes and dudettes alive is what will keep you on your toes. A base enclosure only has a limited amount of resources to sustain you (except for the infinitely blazing helicopter, but you can't go back to previous areas), so to paraphrase Tony Montana, you must always stay hungry. 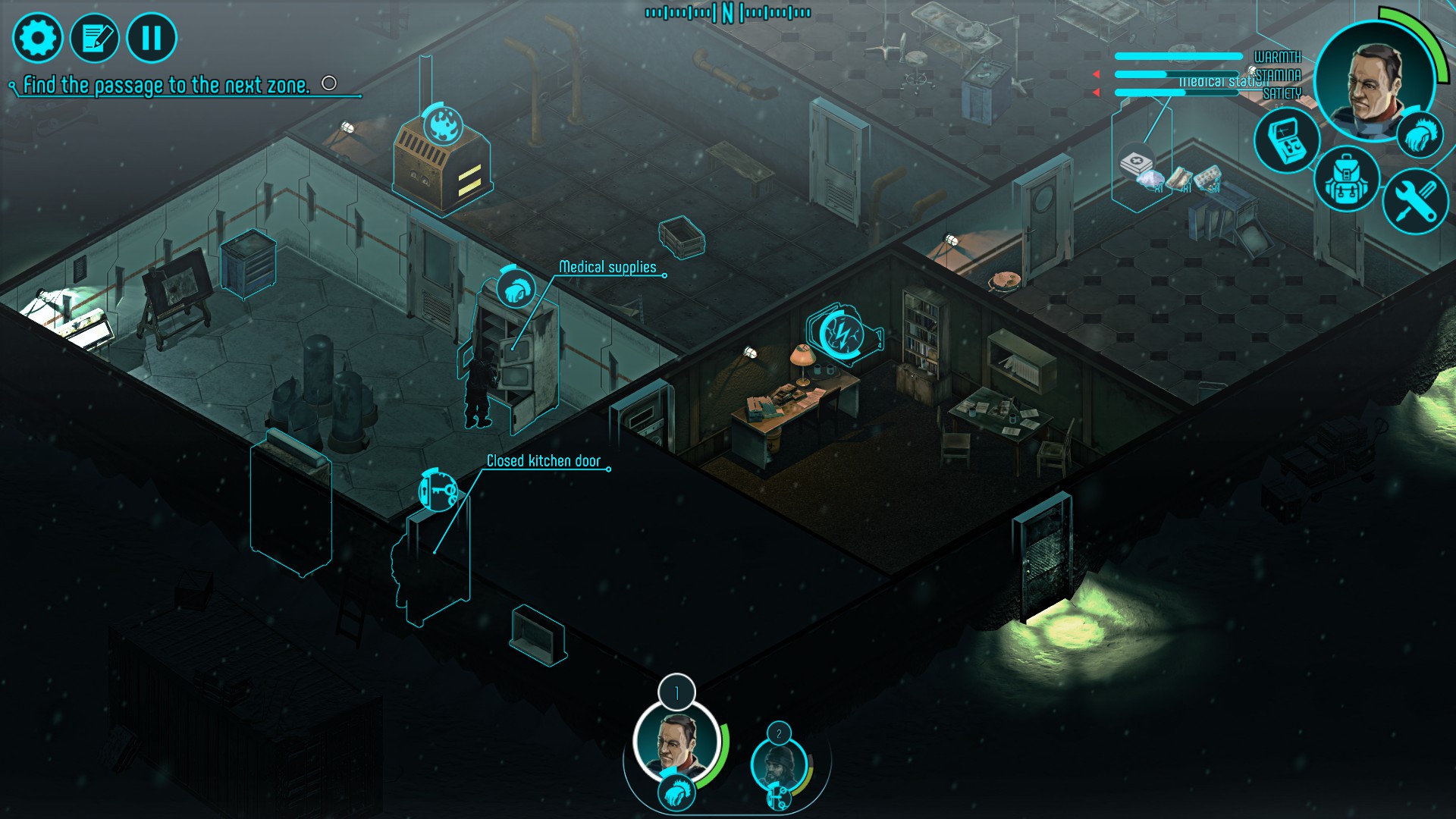 One tries the lock, the other pilfers.

When you enter a new sector of the base, the map is updated with the locations of the buildings, the exit, as well as the status (open or locked/blocked) of all exterior doors. If you play on challenge difficulty (the developers would love it if you did, as that mode unlocks the most characters, as well as additional endings), you won't know the role of the buildings until you enter them. On normal, you will instantly know which place houses the clinic or the maintenance shed. This knowledge is super important when you limp out of the previous zone on a wing and prayer and need to quickly find food, shelter and a bed.

Of course, you first need to get into a building. And here's where the variety of approaches the game gives you rear their head. If the door is blocked by snow, you can choose to shovel it away (degrades your shovel – usable items in the game have the sturdiness of a sword in TES: Oblivion) or dig it out with your hands (takes forever). And once you uncover the doors, you might be faced with a lock. This can be circumvented via key ring (takes forever), broken into (degrades crowbar, breaks the door), lockpicked (degrades lock pick) or have the lock shot off (this isn't America, bullets are rare). 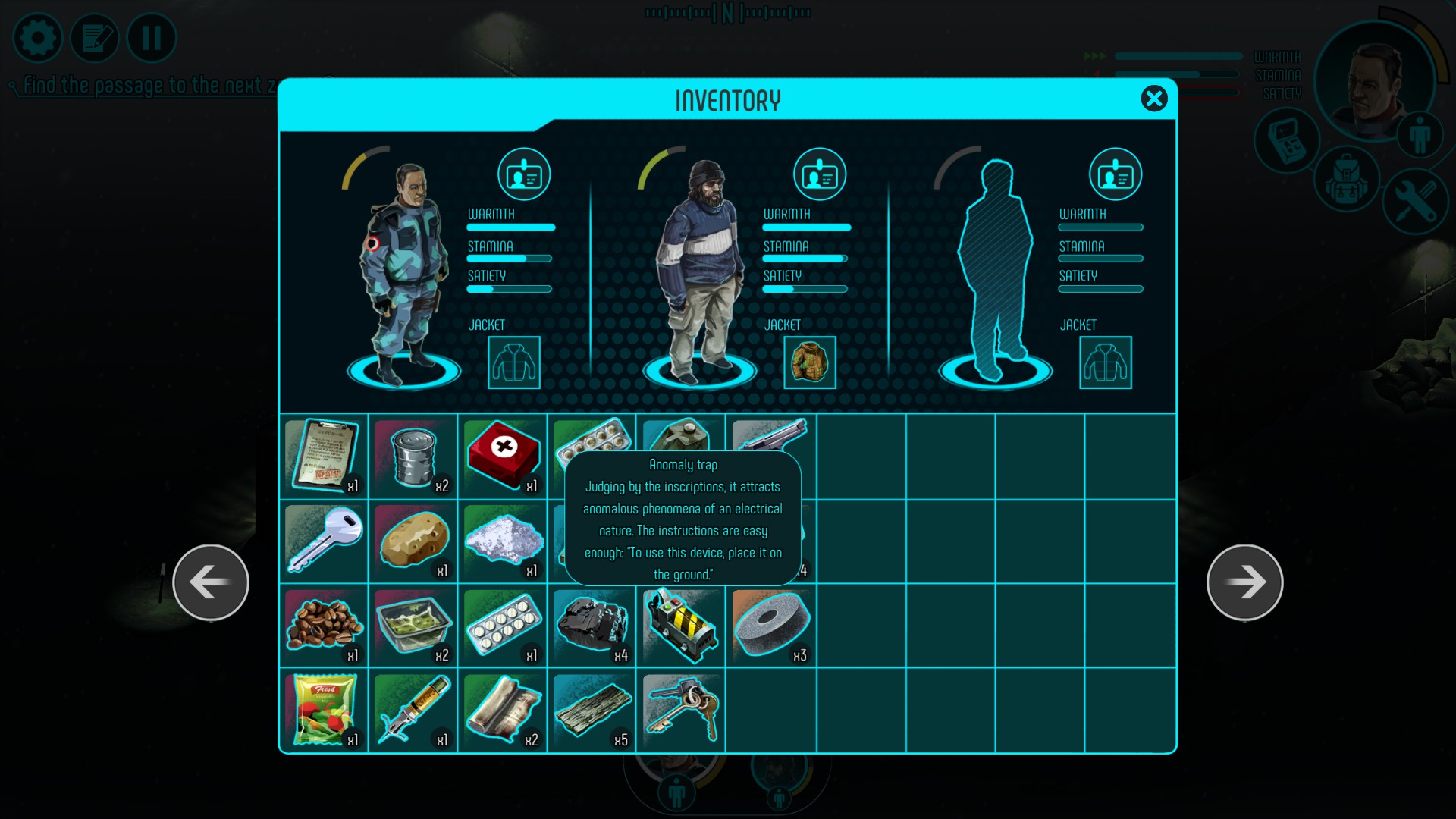 At least I don't have to play any inventory tetris.

And once you're inside, you might want to fix the freshly broken doors (consumes resources). A heated house is basically the only way to warm up your walking icicles. However, if any of the exterior doors or windows are broken or open, you're just slowly adding to global warming instead of warming anything up. So you'll want check all possibly heat-dissipating portals if you’re going to secure a cubbyhole.

Without a doubt, every building will have a fuel generator and furnace. In early levels, some, if not all buildings will have them running, while the later levels will be filled with unheated, un-energized buildings – and some generators/furnaces will even need repairs! Feeding furnace coal, planks or even rotten wood will keep the building heated for a time, while generators will require fuel to keep a building lit. Lighting is not nearly as important as warmth. However, characters will move slower in dark buildings, using their flashlight to navigate. And while you can instantly spot all the interactive objects in a lit room that your character enters, you will need to shine the flashlight at objects to find out if they're interactive or not. 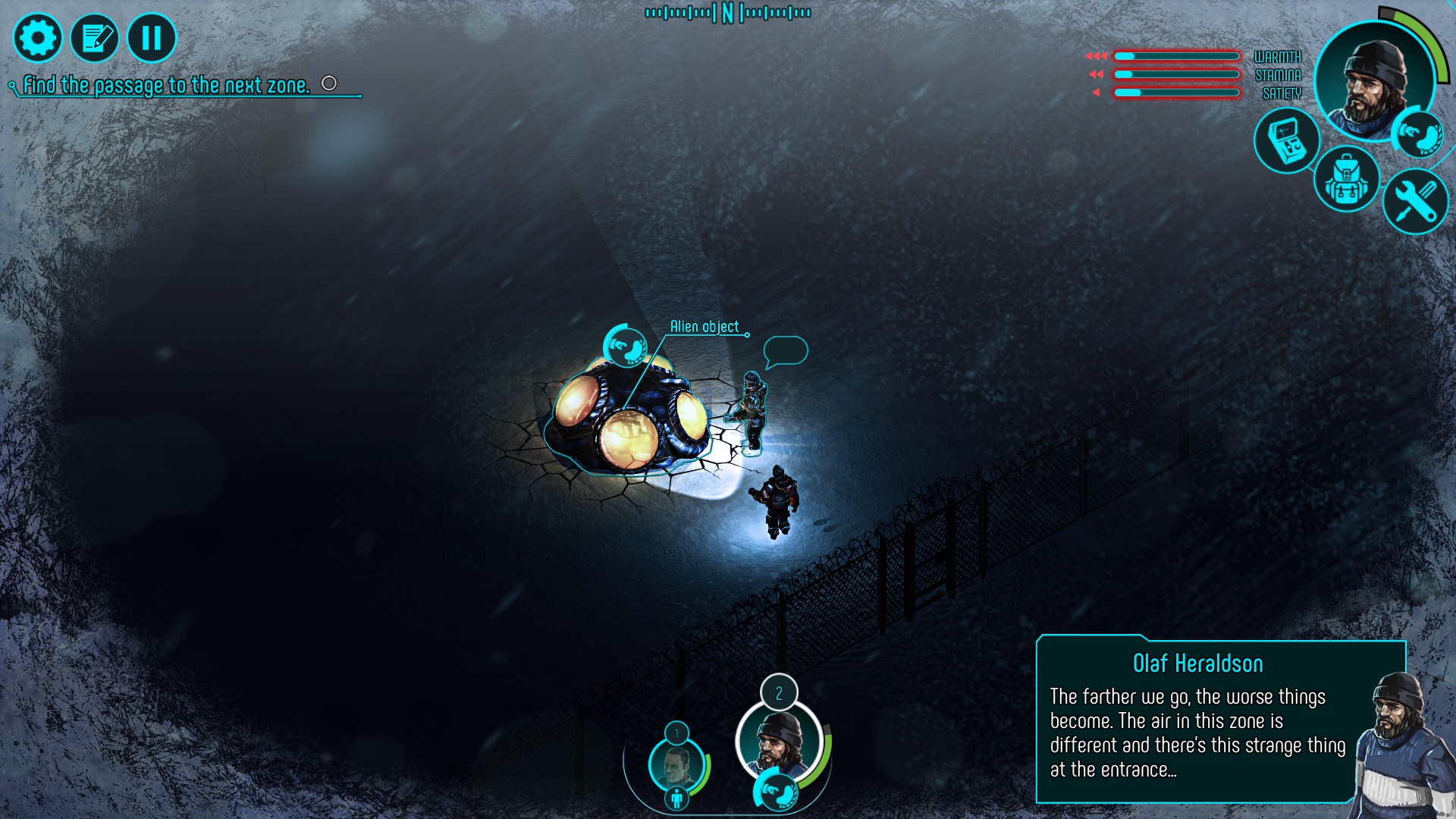 Hunger is staved off by eating various food items found around the base – of course, it's better when they're cooked, but you need a stove for that (fortunately, stoves don't care about furnaces or generators being off). You can eat the stuff raw (I have eaten ramen noodles straight out of the pack, what of it?), but the benefits aren't nearly as good. You can also consume spoiled food if you're desperate, but you run a chance of sickness. The game is full of these choices – you already know about doors, but almost every aspect of the game has a risky choice added: you can take spoiled medicine if you don't have the real thing or you can use dirty rags to try and patch up wounds, you can poke alien sacks for random benefits… Some activities will give you text adventure prompts bith binary choices, with almost equal chances of something good or bad happening.

However, one thing that will always be dangerous is sleep. While you can keep your troopers going by giving them coffee and candy, those are usually best saved for emergencies. Meanwhile, bed rest can remove the entirety of a character's fatigue. But sleeping for longer periods of time attracts anomalies: elemental balls (mostly) that make your survivors ill by mere proximity. Some of them are easier to kill than others (the lowest level anomaly is harmed by light – cue chasing a ball of dark energy though the Antarctic night, trying to keep the flashlight on it), but the later in the game, the nastier their affects are. Thankfully, they don't really occur naturally, and mere survival will be your foe more often than alien weirdness. 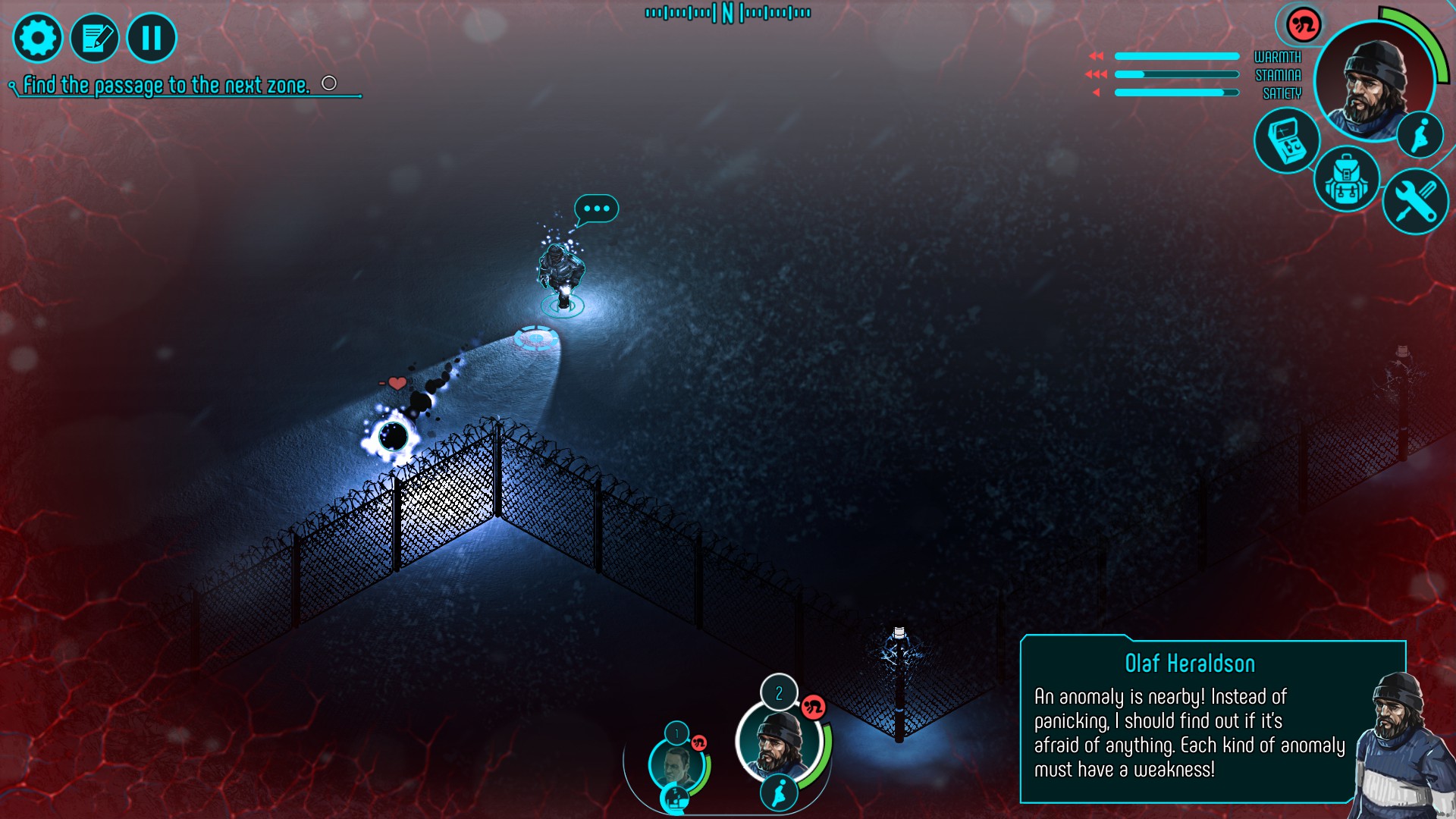 Dehumanize yourself and face to the anomaly.

Speaking of alien weirdness: there is no distrust in Distrust. Most loading screens depict scenes from base or survivor life that are downright cozy. And your survivors can't really be taken over by aliens to betray the others (the other, unless you unlocked the third slot). So unless you let one of the three needs fall really low – this triggers development of bad conditions not unlike desperation breaks in Darkest Dungeons – you won't have anything to worry about with your characters. The closest the game comes to distrust is the “Delusion” condition, where a survivor will see one of their friends as an anomaly, experiencing health drain like it was the real thing.

Slightly mistaken naming aside, Distrust is really well made game. It’s easy to control. You can switch between the survivors with the number keys, making it easier to rummage through two separate buildings at the same time. The inventory is shared, though some items can only be used by one person at a time (mostly comes up with that damn keyring). The interactive prompts have illustrative icons, and you will hardly ever be strapped of information in the game. 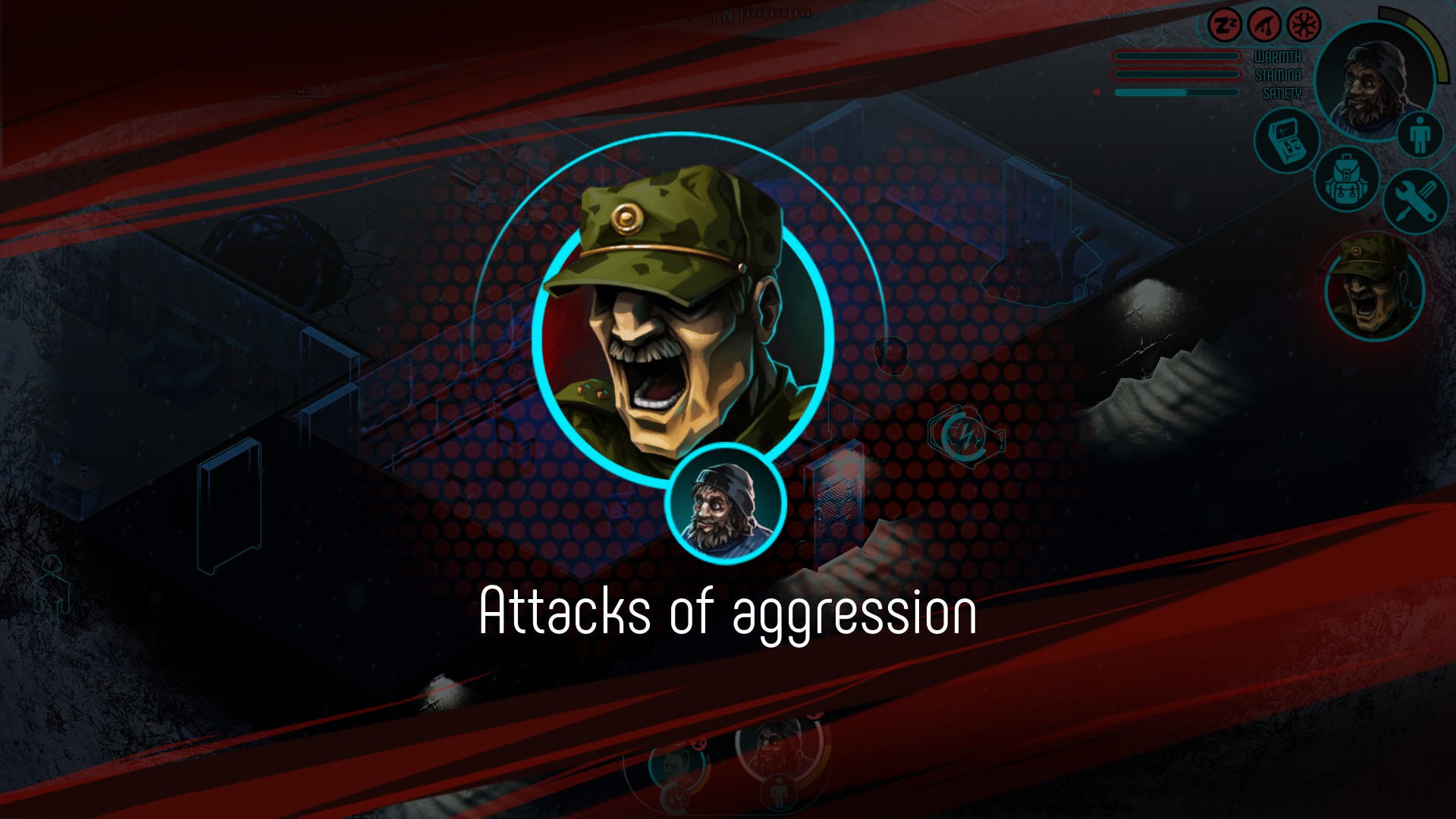 Lack of sleep turns you into a drill sargeant.

Distrust is pretty, too. It's not the artistic experience that one could get in Transistor, but the 2D portraits are competently drawn, the textures work well with the graphics, and the UI is both nice and easy to use. The lighting well done, and the “poke the mysterious alien relic” prompt is hilarious beyond reason. The sound design is OK: I don't remember any of the music bits, but the sounds in the game usually give you enough audio cues to understand what's happening. This is usually important when you hear those damn anomalies spawn!

In the end, Distrust is a fine game with really no trust issues. You can finish the normal difficulty campaign in afternoon (or a few days, if you're a filthy job haver). Challenge difficulty will offer you new challenges, and you'll have new survivors to throw into the fray, which is super nice. It's a pity you can't save those poor helicopter pilots, though!