Because the internet needs another opinion on Destiny 2!!

Destiny had a rocky start when it launched in the fall of 2014. It was a bare bones product that hung it's hat on it's solid gameplay base. It didn't take long for many players including myself to churn through all the content the game had to offer, and the content that was there was largely underwhelming. It was a huge disappointment, and it's first two expansions only underlined the lackluster quest design and rewards system it had to offer. The Taken King was was a significant improvement in a number of ways, but it wasn't enough. I played the new content and quickly moved on to greener pastures. My experience with Destiny across it's 3 year life span can be summed up in one word: tedious. Destiny 2 appears to be a much more well rounded game then it's predecessor, but does in differentiate itself enough to draw more jaded fans back in? 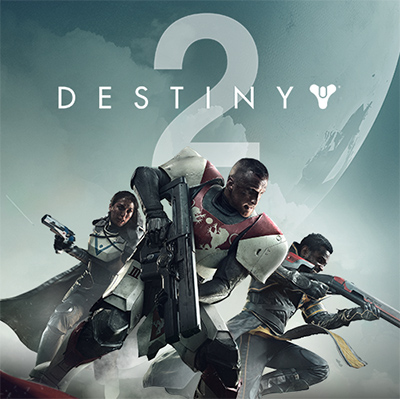 Destiny 2 is a much more story focused game then I ever could have expected. This campaign starts off hugely impressive, especially in comparison to the original games "story", but as it continues on it reverts into a bog standard FPS campaign, which is still a massive improvement for the franchise. You have all the standard tropes at play in this story, from the wisecracking robot to the old favorite "you are the chosen one" motif. The sheer fact that there were actual set pieces and cohesive cutscenes blew me away but the actual plot arc is devoid of any sort of traction or consequence. You know from moment one exactly how the story is going to progress, and that's a fucking bummer. 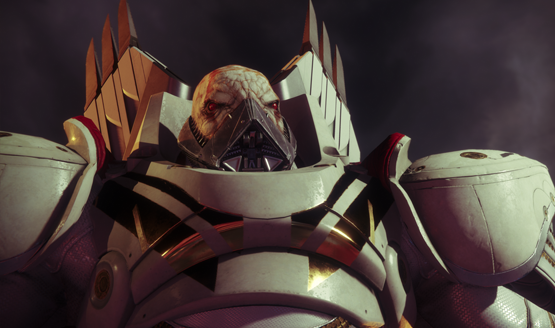 Luckily, this new campaign isn't all the game has to offer over it's previous installment. There's a ton of extra stuff to see and do in Destiny 2, it's somewhat staggering at first blush. Side quests, adventures, patrols, lost sectors, strikes, flash points, challenges; the list goes on and on. It takes quite a while to see everything the game has to offer, and even when you've seen everything once the system Bungie has in place for the endgame is a complete 180 from the backwards randomness of the first game. Everything you do rewards you in one way or another, which is a great improvement but it's still not enough to keep my interest. I feel like I got my moneys worth by playing through the story and a handful of quests and adventures. I just couldn't bring myself to keep playing without a narrative hook to latch on to. In spite of the relative weakness of the plot I still want to have a narrative reason to back up the things I'm doing, something more than "it's for the war effort". I can recognize the craft and care Bungie put into keeping this game fresh for it's veteran players, and how they made the loot meaningful and fun to pursue, but I don't see myself ever getting into the grind. 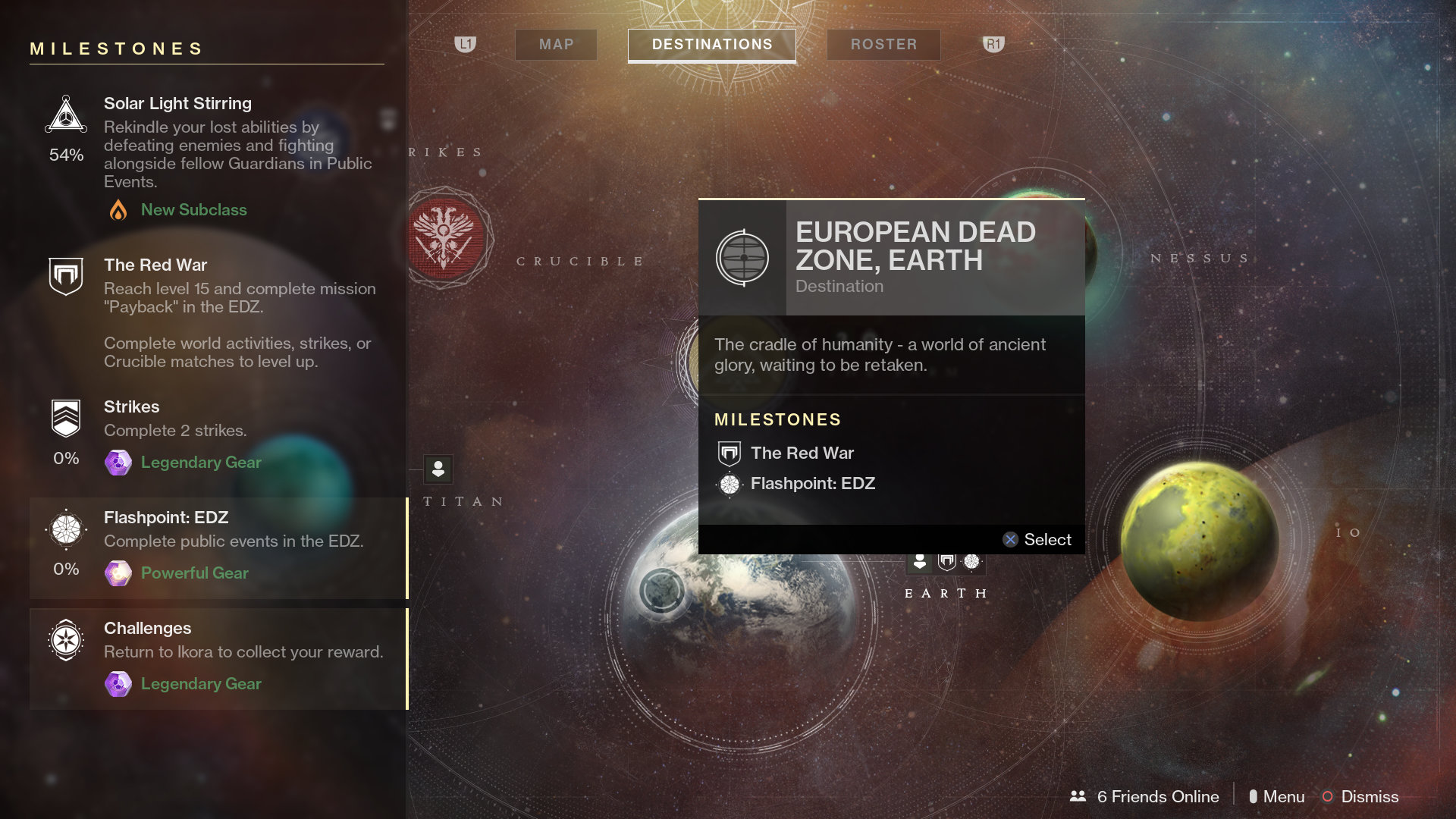 The core shooting mechanics of the first game are intact with very few additions. Each class has one new subclass to experiment with, and the addition of sub machine guns and grenade launchers is a welcome but not exactly major change. What is a major change is the way weapons are equipped in your two slots. Gone is the old primary and secondary system from Destiny 1, in it's place is a system that outfits you with one kinetic and one elemental weapon. With this change I was finally able to realize the dream of having two sidearms equipped, so I'd say it's a success. Lastly each class now has a recharging ability to call on, such as a barrier wall for titans and a dodge roll for hunters. These small changes are all great additions to a solid core shooting mechanic, and only help cement Destiny as a game with fantastic fundamentals. 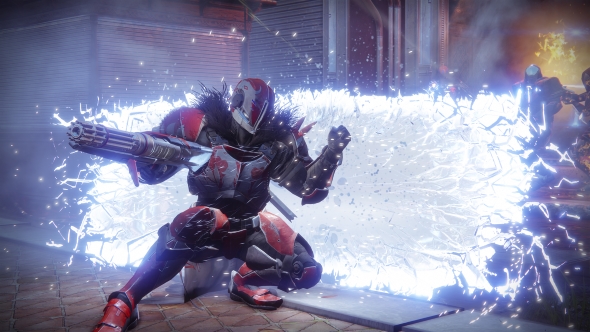 Destiny 2 looks fantastic as expected. Bungie once again proves itself to be the king of sky boxes, with gorgeous views in every single zone you explore. I'm so happy that Bungie didn't keep a single area from the first game in 2, and instead opted for 4 brand new zones to run around on. One weird design decision I can't quite wrap my head around is the lack of sparrows in the early game. Unless you get a random drop, you won't be able to use a sparrow until you complete the campaign, and it really gets old running around on foot everywhere. The new armor pieces and weapons all look great as well, but I can't help but be a little pissed off by the way shaders are implemented this time around. If you didn't play the first Destiny, shaders were color schemes you could apply to your equipment, and they were infinite use. Now they are one time use consumables, and they have to be applied separately to each piece of armor you're wearing. In a game where you change armor and weapons constantly, you only really have two choices with shaders now. Either save the ones you want until you have endgame gear you likely won't change, or buy more loot boxes and pray you get more of the color you want so you can keep applying it. It's bad enough that emotes and skins are locked behind the new "bright engrams," but this feels like a bridge too far for me. You get these loot boxes fairly regularly after you hit level 20, but it just feels scummy to me that they fundamentally changed the use of shaders between games so they could stuff them into loot boxes you have the option to pay real money for. 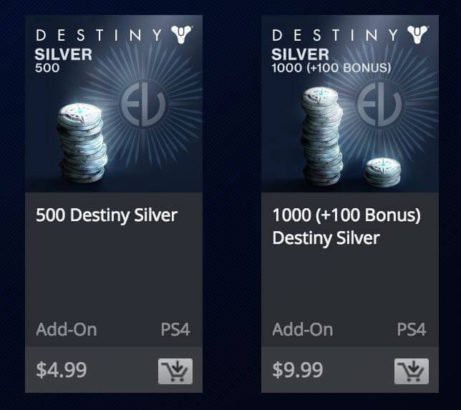 Destiny 2 is bigger and better in nearly every aspect when compared to the first game, but it's hooks don't go quite deep enough for me to keep playing into the endgame. I love that they've included a wide array of activities and side content to pursue in the zones, and the zones themselves are all fantastic. The shooting action itself remains top of it's class, and the story is actually there this time around even if it's not top of it's class. The game screams quality in all respects, and I have no doubt millions will continue to play it week to week, but I likely won't be among them. I'm satisfied with what I was able to accomplish in the 25 or so hours I played of Destiny 2, and that's more than I can say about the entirety of the first game.