"Education? Is that some sort of mech?" - Torchman

I’m going to tell you the story of a forgotten genre.

And then, suddenly, edutainment games were no more. No one really knows the reasons behind the fall of the Edutainment Kingdom. The Internet is to blame, most likely... Gosh darn internet bubble and easier access to free games. One thing is certain, though, and it’s that I find Rayman Junior on the PlayStation 1 and old Windows PCs absolutely brilliant.

The story is suitably simple for a game designed to teach children. Mr. Dark, the antagonist of the first Rayman game, steals the contents of The Magician’s grimoire and destroys the plans to his lair. Neither The Magician nor Betilla go after Mr. Dark, so Rayman has to take care of it himself. Go, Rayman, restore the lost knowledge contained on the grimoire!

What made Rayman Junior so special is how seamlessly the educational stuff tied into the gaming bits. It was a platformer more than it was an educational game, with lengthy sections dedicated to pure platforming. And the educational bits followed similar rules to a traditional game anyway! You'd often be on a time limit, being on a slowly descending platform as you're being asked the question, for example. Take too long to answer, and you fall into a pit! Choose the wrong answer, and you're locked into a death trap with instant kill enemies and obstacles.

The final level was this super awesome auto-running section, basically a prototype version of the mobile games of today. Plus, as a game, it was a lot more approachable than the tough-as-nails original Rayman, so it served as a perfect entry point to the series... No more having to collect a ton of Electoon cages to be allowed to complete the game! 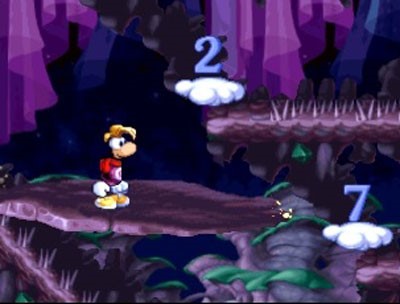 In these early days of personal computing, I didn’t have a lot of choice as to what games I was allowed to play. How amazing it is to have an educational game like this, one that does not forget it's a game, cannot be understated. Parents are okay with it because it's like their children are practicing for school. Children are okay with it because it's a video game their parents are okay with. I guess these days kids are a lot more connected to technology, but that's a story for another time.

Can we have another one of these, Ubisoft? Make a Rayman Junior 2 based on Origins or Legends, I’m sure children everywhere will thank you. Grown-up children too. I... I'd play it. Please.