It'd be too easy to talk about how I learned English from video games... or despite video games, including one game that set up me the bomb in junior high school. At least Zero Wing (Toaplan, 1989) taught me to not trust all published material for grammatical correctness. Just look at this cblog as an example.

Instead, I'll tell you of a game that tried to teach maths. And I've actually played it when I was back in elementary school... and a bit more today to refresh my memories of it.

Monkey Academy (Konami, 1984) was released for Colecovision and MSX. I've played the latter version, and that's where the screenshots are taken from. (The game name's a link to a gameplay video, by the way.)

To quote the back of the box (I found a scan online):

Have you ever heard of a mathematical monkey? Here's one busily trying to solve problems while fighting off monsters! But love knows no bounds and the monkey must prove his genius by bringing the right answer to his girlfriend. Give him some help and don't let the monsters make a monkey out of our little friend! 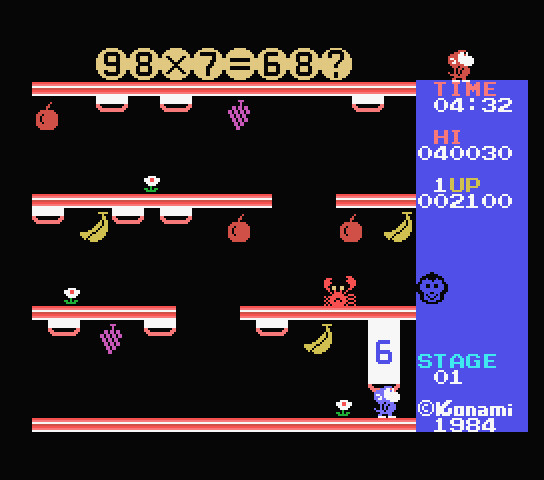 The crabs are the only enemy in the game: they drop from the top of the screen and move sideways until eventually falling to the bottom floor and leaving the screen through the left border. Like in Mario Bros. (Nintendo, 1983), jumping on them is a bad idea and to defeat them. Instead, the player has to throw a fruit at them. The other ways for the player to fail are to pick a wrong number three times (which brings out something that looks like a zombie crab to give the correct answer) or let the time run out.

The monkey is actually pretty good to control. The arc of the jump is dependent on whether he's in a position to jump to the ledge above or not, the shades and fruit are grabbed only when the monkey jumps straight up, the jump is bound to the fire button (remember this is the time when joystick's 'up' was on microcomputers frequently bound to the jump action) and trying to choose the shade currently pulled down is chosen with a key named "Select". This was also the only time I ever heard of software using the said key. Throwing the fruit the monkey is carrying is again the jump button. In any case, the game controls far better than Ice Climber (Nintendo, 1985), that's for sure... and I'd argue it's also more fun for that reason alone.

There are five different levels of maths to do: addition, subtraction, division, multiplication and operations with parentheses. Changing the maths level is also easy enough - the player is given the choice between every stage, each with a few equations to fill in. The equations aren't necessarily simple, either: addition has two-digit summands, subtraction has negative numbers, multiplication has factors greater than 10 (say, ?7*7=329). Alas, the difficulty of these equations does not appear to become harder as the game goes on. After playing the game to stage 6, I'm not sure the rest of the game becomes any harder either. The crab doesn't appear to move any faster, the time limit isn't decreased, ... I see no difference but a slightly different stage layout and colour.

Would this game have helped to learn maths? I don't know, maybe? Given how this is an action game, pulling out a pen and a paper isn't advised, so it does teach you to do the maths in your head while doing another thing at the same time. Cramming multiplication tables is faster without this game. I'd think addition is also easier to learn if you don't have to worry about crabs pinching the monkey, but then again with the summands having more than one digit, the answer isn't that elementary. The last two levels, though, are fun in their difficulty even today... when the missing factor is something else than 1.

But does the game really teach maths on those levels or does it teach something else? Here's one of the operations I found more difficult than most: 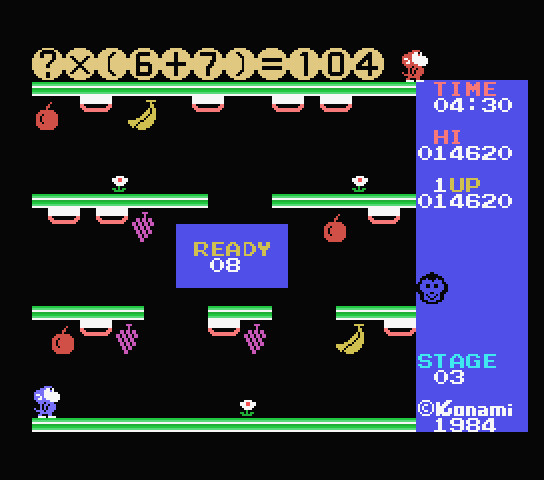 Did I learn anything from this game when I played it in my tweens? I doubt it, even though my maths grades started climbing up over the years I occasionally borrowed it from a classmate. I was playing games not related to learning anything. Today, though, I can see it being not terrible at all. I actually liked playing it for a few levels, but then the lack of challenge in the maths section became too annoying.

The monkeys still got the score wrong, though -- I find this game well above 2/10 for its time, and as an edutainment puzzle platformer, possibly even today.

EDIT: The comments in the longplay I posted say that later in the game there will be more holes in the floors and more than just one enemy on the screen. I suppose I should've played the game longer.