So, This is Why You Guys Like the PS4 So Much

I tried to drink myself too sick to come to work last night. It's a game I play with myself some Wednesday nights when I'm feeling depressed, frustrated, or annoyed with my job. I mean, I could just text that I don't feel well to my boss and then not come in, but then Old Man White Man's Guilt will wrap his gnarled fingers around my shoulders and slide his tongue of worthlessness down my ear canal while I try to play video games and masturbate with my free time. It's no good, so I have to drink a lot and fast and make myself sick, so control will clearly be out of my hands, and Old Man White Man's Guilt can't tax my body with his lusty advances. Them's the rules.

Even in the bar's bathroom while pissing on my jeans I felt the first churning of fried fish and black russians in my gut preparing an uprising, an evacuation, so I turned off my alarm for the next day. Might as well sleep in, if I'm going to be spending the night curled around my toilet. When I was a kid, I would shove my fingers down my throat, until the saliva started pooling out from my lips in long streams, and then run into my parents' bedroom to vomit on the floor. Some habits die hard.

The problem is that I'm just too goddamn good at drinking. I guzzle water all day, so my organs are liquid. Dehydration never hits, and my stomach is a steel drum in response to years a childhood vomit escapades. At my drunkest, I get the best sleep of the week and wake up feeling amazing. But it wouldn't even matter, since I turned my alarm off. Control was out of my hands, and Old Man White Man's Guilt knew it and was weeping in the corner.

Except the alarm went off. Five in the morning. I turned off Friday's alarm, because I was too drunk to realize today would be Thursday. A buzz and the thrumming tune of the saddest disco in the world, and I was awake, out of bed, and probably going to work.

Sitting on the toilet (instead of dry-heaving into it like I should have been), I checked my notifications. My Playstation app told me that I had a message from an alise7tohw. Now, that is one fake-ass looking name, and I was sure I didn't have anyone by that handle in my friends list. I didn't. So, I went to open the message and found out that Sony has another Playstation app for messages. And fuck them. You only need one app, Sony. Even Nintendo only has one app. Nintendo got that right. That's like saying No Scope Joe has a better foreign peace policy than you (god rest his hero's soul).

I downloaded the app, because I'm a fucking piece of shit.

Short and sweet with no mention of who she might be or what she wants out of me. It said she was offline, so I sent a "Hello" back, not expecting much. But what can it hurt? No one ever died from saying hello. Or at least I wouldn't. I don't care about anyone else.

New messages shot back before I finished brushing my teeth. 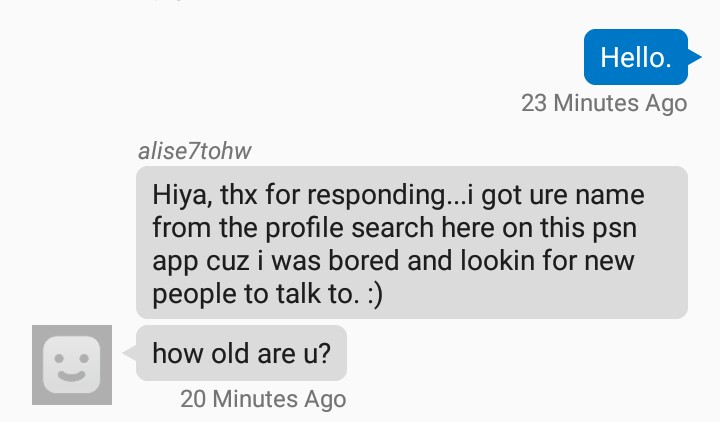 I figured it must have been some kid just goofing off or whatever. The profile didn't have any trophies or games and everything was either blank or private. But what scam was there to get out of me?

I took a shower, telling myself that taking a shower didn't mean I was going to work. I'd have to take a shower no matter what. But Old Man White Man's Guilt heard my thought and licked his lips, readying his fingers for a fondling.

After I stepped out and dried off, there was a new message. 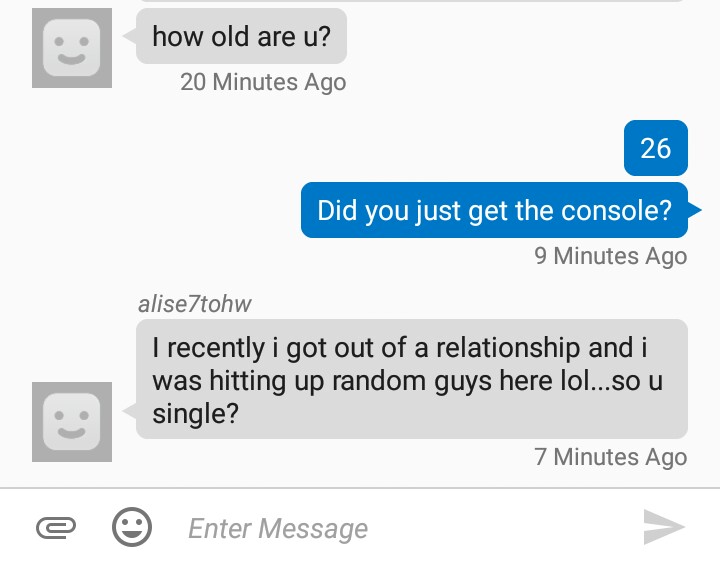 This is when the cat yowled at my bathroom door. The bitch. I'd have to open it, or she'd run into the bedroom and paw my girlfriend awake. No one needs to be awake at five in the morning. The flabby, mangled-eared cunt stumbled into the bathroom and gave me her mean eyes. She either has telepathy, or I have voices in my head, but either way she let me know that if I didn't start petting her now she would let loose a yowl that would grind her throat raw and wake the neighborhood. I had to pet her. I had no choice.

I gave her a few scratches and sent another message before walking to the closet.

I dressed for work, reminding myself that I could always change, if I decided to stay home. Old Man White Man's Guilt stopped trying to lick his own asshole for a second and looked toward me, twisting his lips into a wide grin.

But we both knew this was a gag, a joke, a ruse. I would be going to work. I'm a pussy, a coward. I'm worthless, and worthless people always go to work.

And then I saw tits. 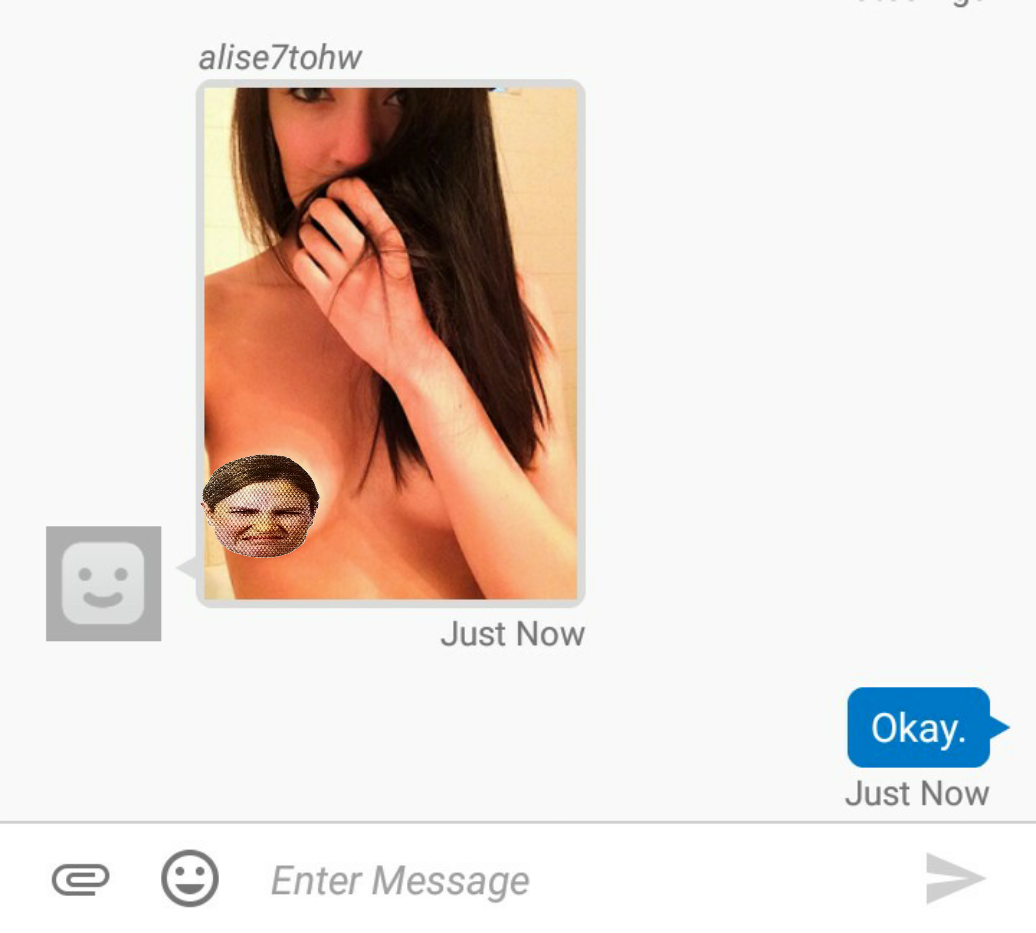 This is where the conversation ended. I blocked her. A fear crept through me, flashes of child Vadicta with a bookbag of porn, of women and the strange excited fear that always came with it. Old Man White Man's Guilt tied his flesh lasso tight around my guts and leaned close, flicking his tongue through one ear, behind my eyes, and out the other. My girlfriend was still asleep. I could have asked to see her pussy, her butthole. But as we all know, there's only so far you can let Old Man White Man's Guilt fill you, before he eats you alive from the inside out, and I was just about at my limit.

I also have to wonder if this is a common experience. Is this the reason the cult of Dtoid continues shipping people free PS4s and playing together and being a bunch of Sony fuckboys? Is this some sort of initiation? Some attempt to corrupt me? If so, thank you. I never feel more at home than when I'm with all of you.