So, this is the long awaited follow up to Warriors Orochi 3 Ultimate and the combination is a lot of mixed results.

The game follows one of three furries depending on which starting character you chose. They all have the same goal, to compete to become the next ruler and restore the Spring to save their world. They have to borrow the powers of people from other worlds to do so. Each character has slightly different events, but they all eventually converge to the same point at the end, in which they face off against the almighty Yomi. 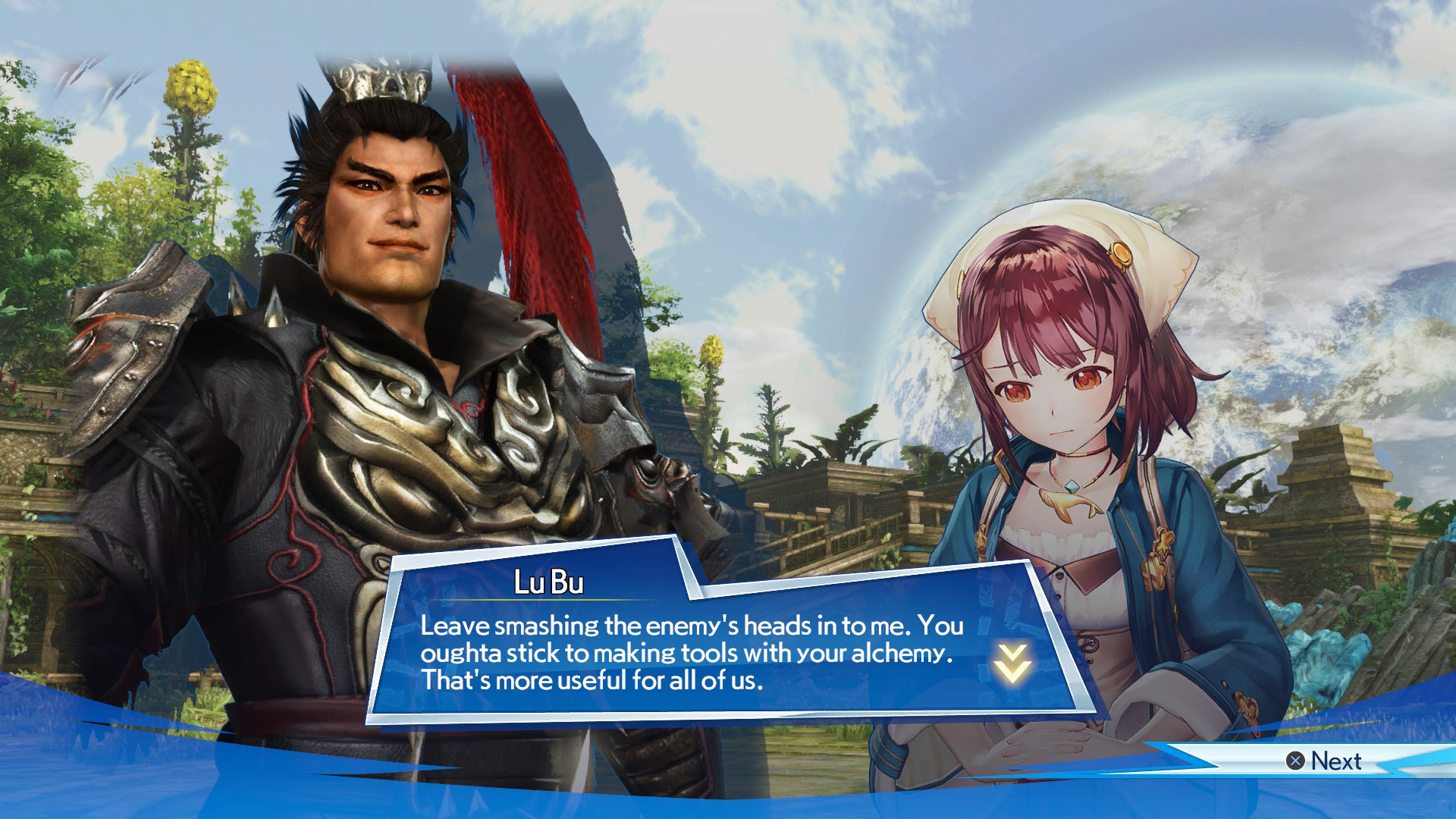 The graphics are a slight improvement over that of the previous entires, with more character physics. This results in jiggling boobies for your Dead or Alive characters and the bodies of enemies bouncing around instead of just landing flat on the ground. The problems that I have encountered during the game is clipping in some parts of the sanctuary/base area and the occasional enemy that floats in the air. Other than that, there are no serious problems. The attacks in this game look spectacular and are a massive improvement over the previous games. There are also more enemies on the screen than ever before (at the cost of multiplayer though). Overall, it is an improvement.

This is where the game starts taking a few steps backwards. The first problem is that the only game mode available is the Story Mode. While there are a choice of characters, the biggest difference is only in the beginning based on who you chose as your starting character. Later on, the differences are minor depending on the characters you have available for a fight and the order in which you do the fight. Upon completing of the game, there is no post game. You are asked to save your progress and when you load the game, you are forced to start a new campaign. There is no post-game, which was a terrible choice in my opinion, especially considering not all characters will be available on a single playthrough. Maybe if you clear all the story modes? But, that would take many hours more than it is worth.

The major change to combat here forces every character under the Dynasty Warriors system. Every character has up to a six chain attack that can utilize the strong attack (charge as it is called) for their chain. You will not unlock your full move set until level 20, which can take a while. The cap is 50 and you mainly do it for the stats. There is a major discrepancy between attacks here. While some characters have had improvements to increase their attack radius, reach is a bigger issue. The strongest characters overall have longer reach with their attacks. It makes it easier to get the max bonus from Musou Rush and it makes it easier to continuously juggle enemies. However, most characters do feel better than their Warriors Orochi counterpart if they are in both. Some of the new characters are pretty good as well, but the range superiority makes a major difference. 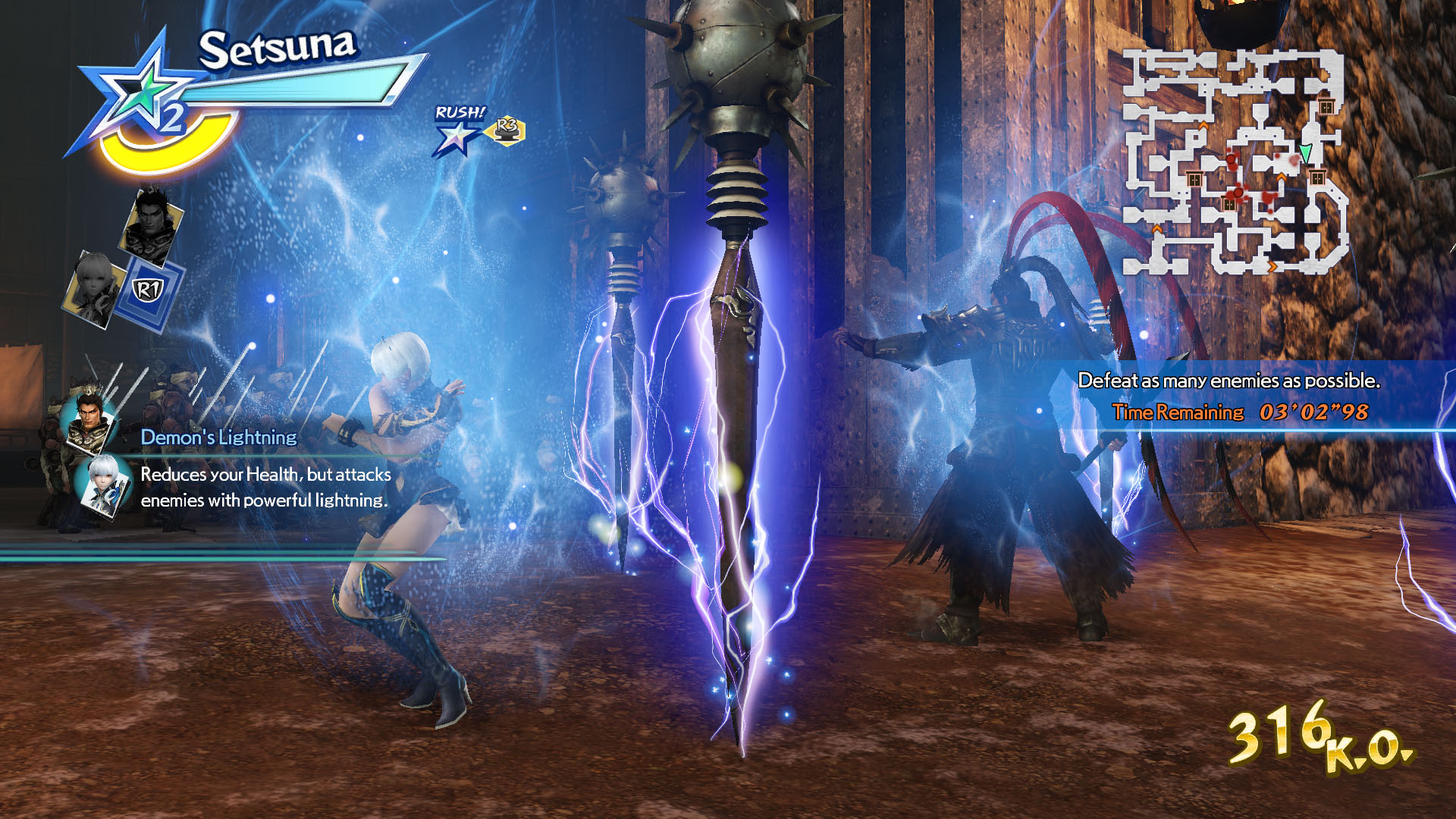 The second change to combat is the morale system. Morale is now measured by the number of stars next to an officer's name. The more stars they have the stronger they are. This makes it difficult to rush through stages as it is near impossible to defeat anyone with more than 2 stars over you because you deal significantly less damage to them. The stars are easy to gain. The first one is gotten by killing 100 enemies though it starts to scale up after. There are missions and strategies that characters attempt in game that you can help in order to increase it more. It is annoying though as I could not find a way to track them in game without scrolling through the annoyingly long combat log and basically had to try to memorize them. The problem is that your allies are always put at a disadvantage and the extra stars for them only helps make it so that they do not die as easily. They are not very useful for helping you fight, even at 8 stars. Luckily, your chosen team of 5 will always have your 4 buddies to help you. The morale system becomes a problem later as enemies often start off with 4 stars while you have to build it up from 1. It basically forces you to avoid some of the enemy officers until you can get enough stars to fight back.

Unlike Warriors Orochi, you cannot switch between your characters here. You only have your leader and you call everyone else out for assists. They will level up and gain experience like you, but you cannot switch to them in the middle of a battle. I was disappointed by this change because it is basically a step back. One of the great improvements of Warriors Orochi was essentially being able to control your allies. The improvement is that your allies are always deployed in Warriors All Stars. The ability to switch between them again would have been nice though. However, the good part is that you are no longer a one person army. Your 4 buddies are far more useful than the rest of your allied army. Your allied army is not Hyrule Warriors stupid, but pretty close. Luckily they warn you when your allies drop below 1/2 and 1/4 health.

Each character also has a friendship meter with all the other characters. Unlike in Warriors Orochi 3, the friendship meters have to be raised independently. That means that if your Zhao Yun befriended Sophie, it only applies to Zhao Yun. Sophie has to befriend Zhao Yun again on her own. This was a poor decision in my opinion as it does not make sense. They should be mutually beneficial to one another. The result is that it becomes a massive grind to unlock all the friendship stuff because you essentially have to grind out every single character instead of just a portion of the characters. Increasing friendship also starts unlocking new abilities, so it is important to do so on your main characters at least. You do have 3 requests you can do for a character to increase it for just one character, but it does not really help. The best way to grind it is to let the ally get weakened, then save them during battle. 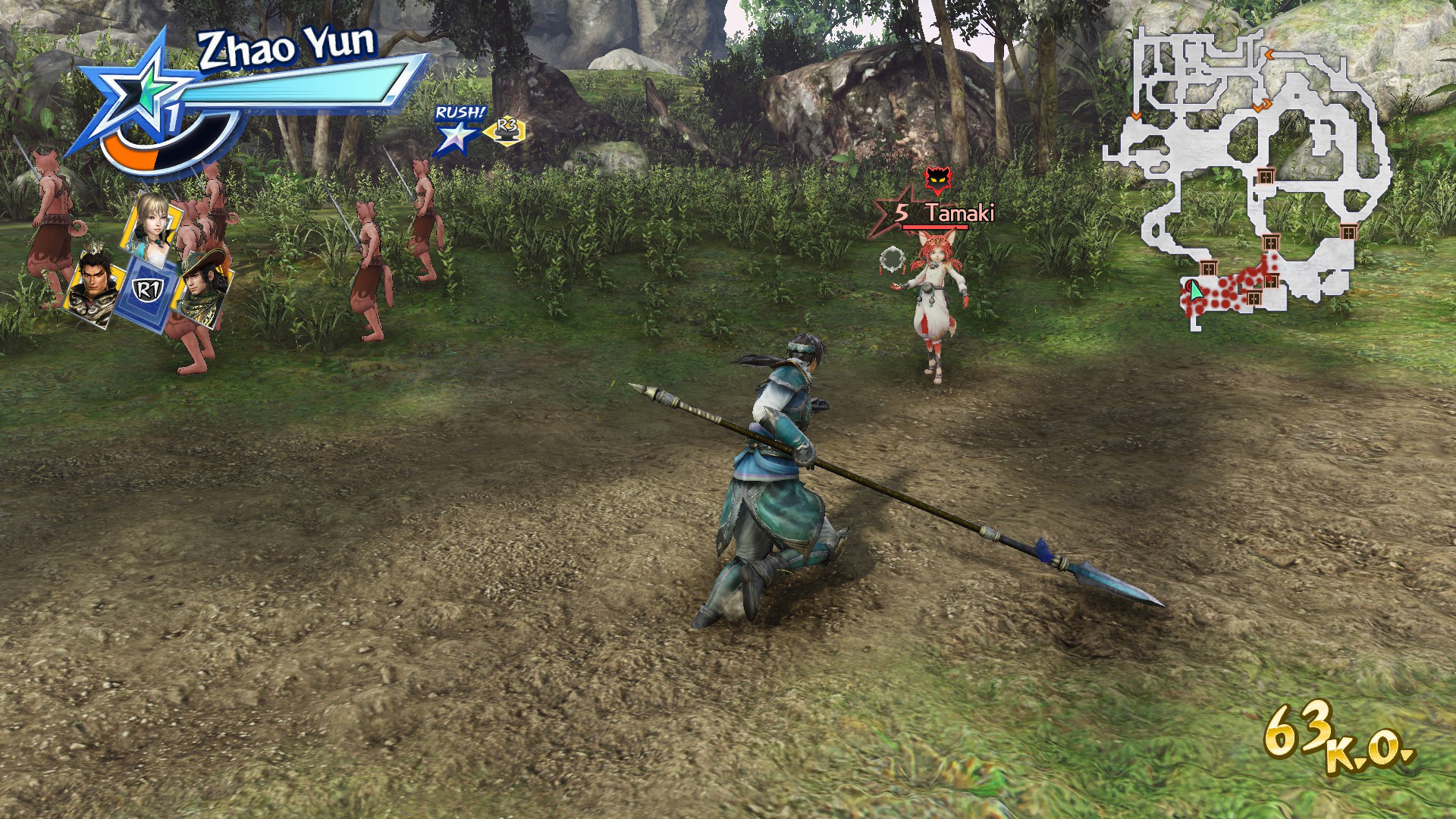 The biggest disappointment for me is the new weapon system. The weapons have been replaced by cards that feature some art of the characters. They are divided into C, B, A, and S tiers just like the 4 weapon tiers of the previous games. The problem is that you need to jump difficulties in order to start getting better ones. Playing on Easy? You're only going to get C cards outside of request rewards. Playing on Hard? You can get A cards if you are at max level. It fails to account for the difficulty of the stage that you are in, so there's really no reason to try to hunt on most of the beginning stages. You have to combine 3 cards for just a CHANCE to get a better one. The chance of fusing 3 A cards into an S card is something like 1/20 and you might not even get a good one (the attack stats and slots for abilities vary greatly between cards). This forces you to basically save scum until you get what you want instead of just hunting on a high difficulty.

Another annoying thing is the "Tales of Zestiria enemy reaction" that is present in the game. Basically, when enemies are hit a number of times, they activate a special attack and go invincible, cancelling your combo. It is in this game and basicaly it forces you to run around them or away from them for about 6 to 7 seconds before attacking because they go invincible during that time. I just find it annoying when they do it in the middle of the combo because you cannot do the same. The final boss does it like crazy. I remember seeing it like every time I dropped their health by like 10%. It just became a long and frustrating battle where the enemy essentially had 5x the normal health (main cause of HP regen).