Ops too much rejoicing

The PS2 was born in a era were Sony had control over the market, after the smashing success of the PS1 the PS2 launched to extreme acclaim from both public and critics.

Greatness do not wait, it seizes its moment, and the PS2 game library is here to remind you all of how great this console was, there's a gigantic selection of titles from all genres, yet again the greatest AAA games were followed up with uncommon and weird classics from the east, collections of older classic games and new franchises that used 3D like it was never seem before.

The Gamecube , Dreamcast and XBOX OG were engulfed by the PS2 success, and although each of these consoles had extraordinary games the PS2 overcome them all with bulks of extraordinary games that redefined its generation and refined 3D games to new limits. One extra reason for its production cycle to run for impressive 12 years (almost double what most consoles get).

In Brazil the PS2 arrived (extra officially) via our Paraguay neighbours (also known as friend smugglers), and it took over the market , it was so much soo that other platforms (even the Dreamcast which had an official presence here) were hard to find ! It was also the first time official games were brough here in big quantities ( although prices were still prohibitive for most of the populace some of us could finally buy games).

Today I show you my PS2 game collection! 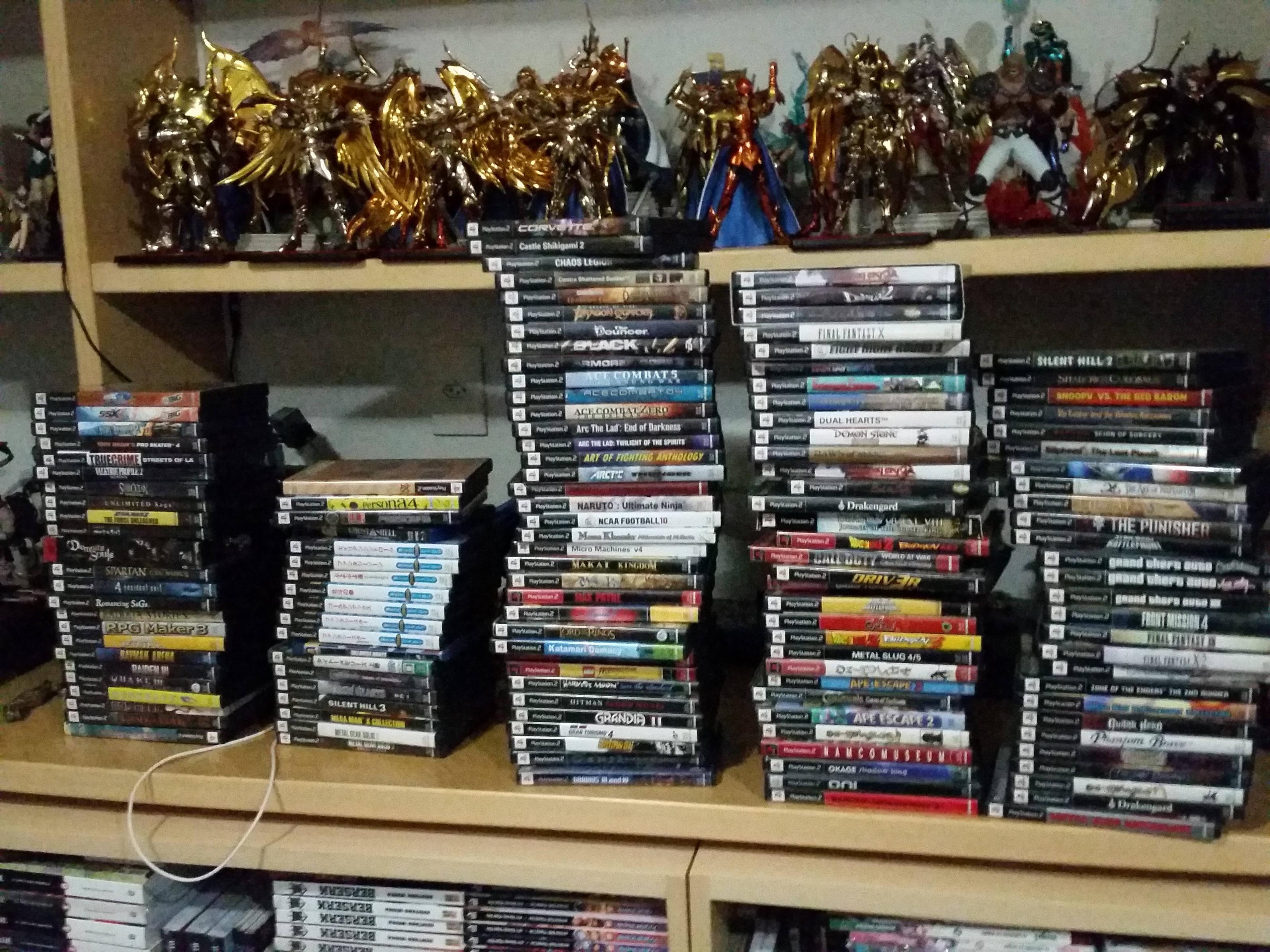 You shall be the stacks of games to pierce the heavens! 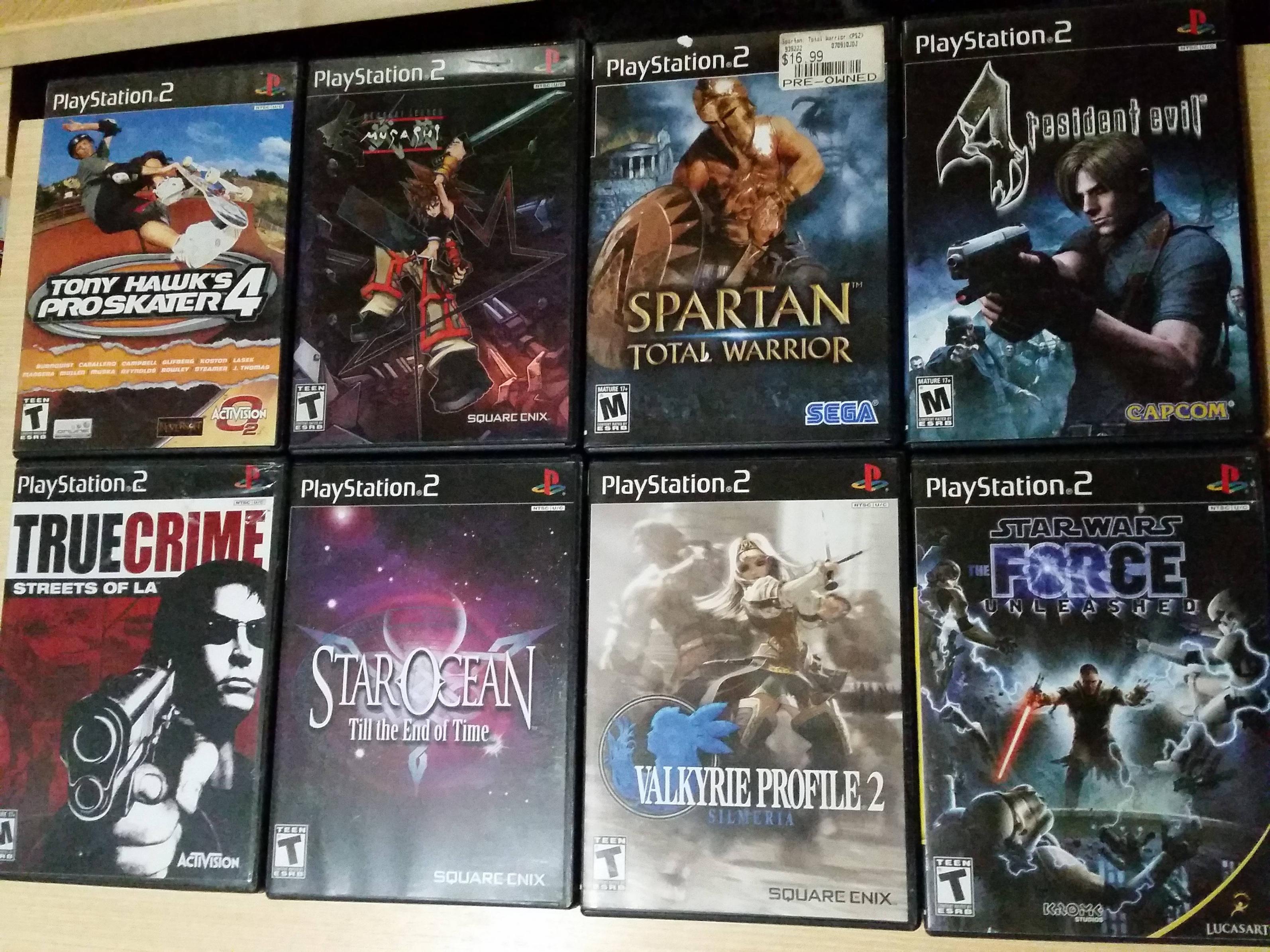 Valkyrie Profile 2 is less rare than the first PS1 game, its a great JRPG title ( although most people don't know about it). Mushashi Samurai Legend is a remake of the PS1 Mushashi with revamped history and graphics. Resident Evil 4 appears here for the first time (and shall appear forever since even my freezer has a playable version of it). Force Unleashed had a great premisse and some of its gameplay was fun , but its a flawed game (shame the second one was worse).

Star Ocean Till the End of Time keeps up with the great JRPG tradition of this franchise, a must have title. 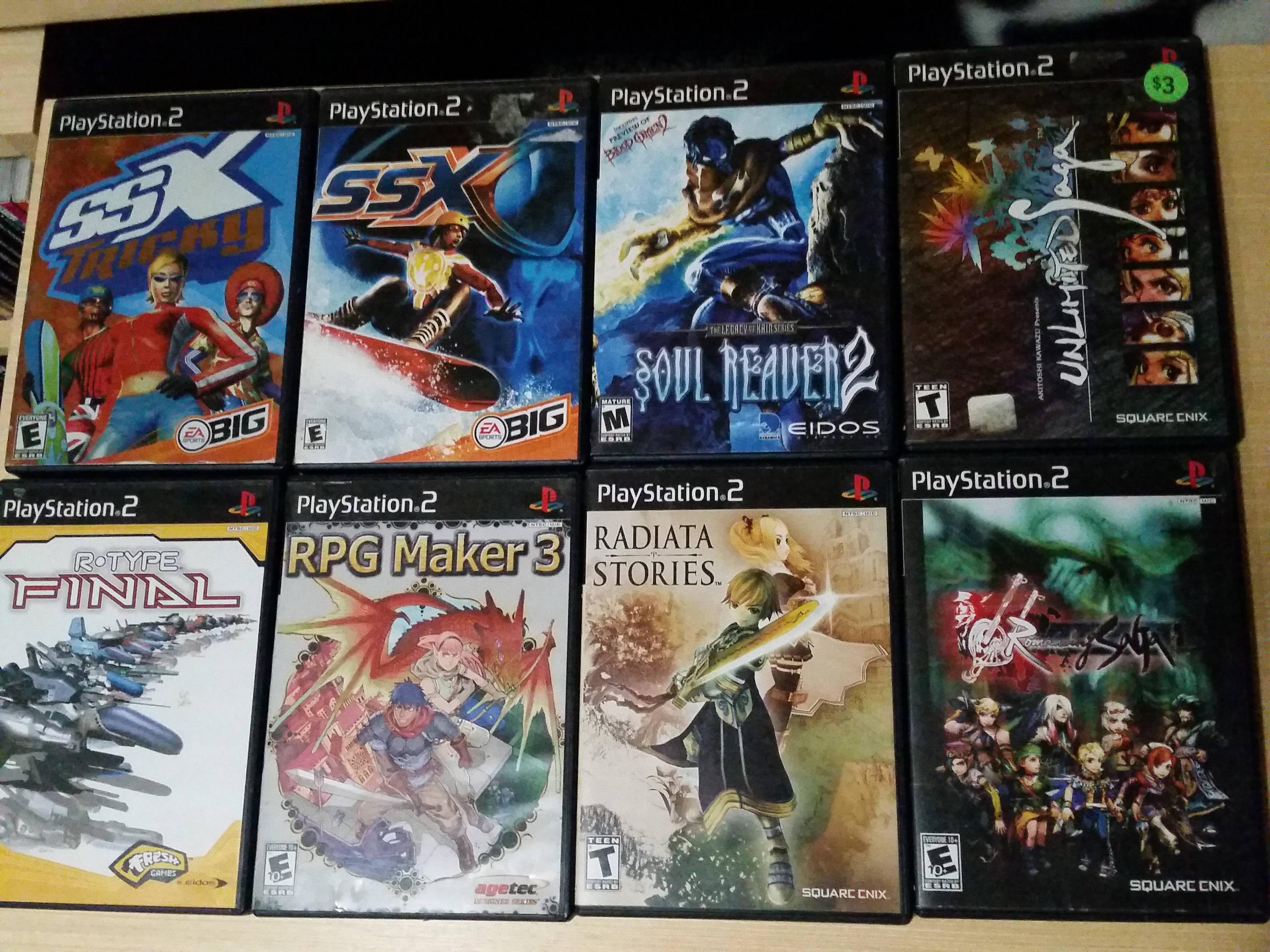 Soul Reaver 2 is a great action game ( wonder why we did not get a sequence during the PS3 era) , Unlimited Saga is a mediocre JRPG bu but Romancing Saga is great ( its the original game with 3D graphics).Radiata Stories was very well received in Japan but didnt sold too much units win the West ( less than 1/2 million) which makes finding copies hard , its a must play JRPG emulate it if you can't buy it.

R-TYPE final is a extremely fun shmup i got it due to the my memories with R-Type during the SNES era. 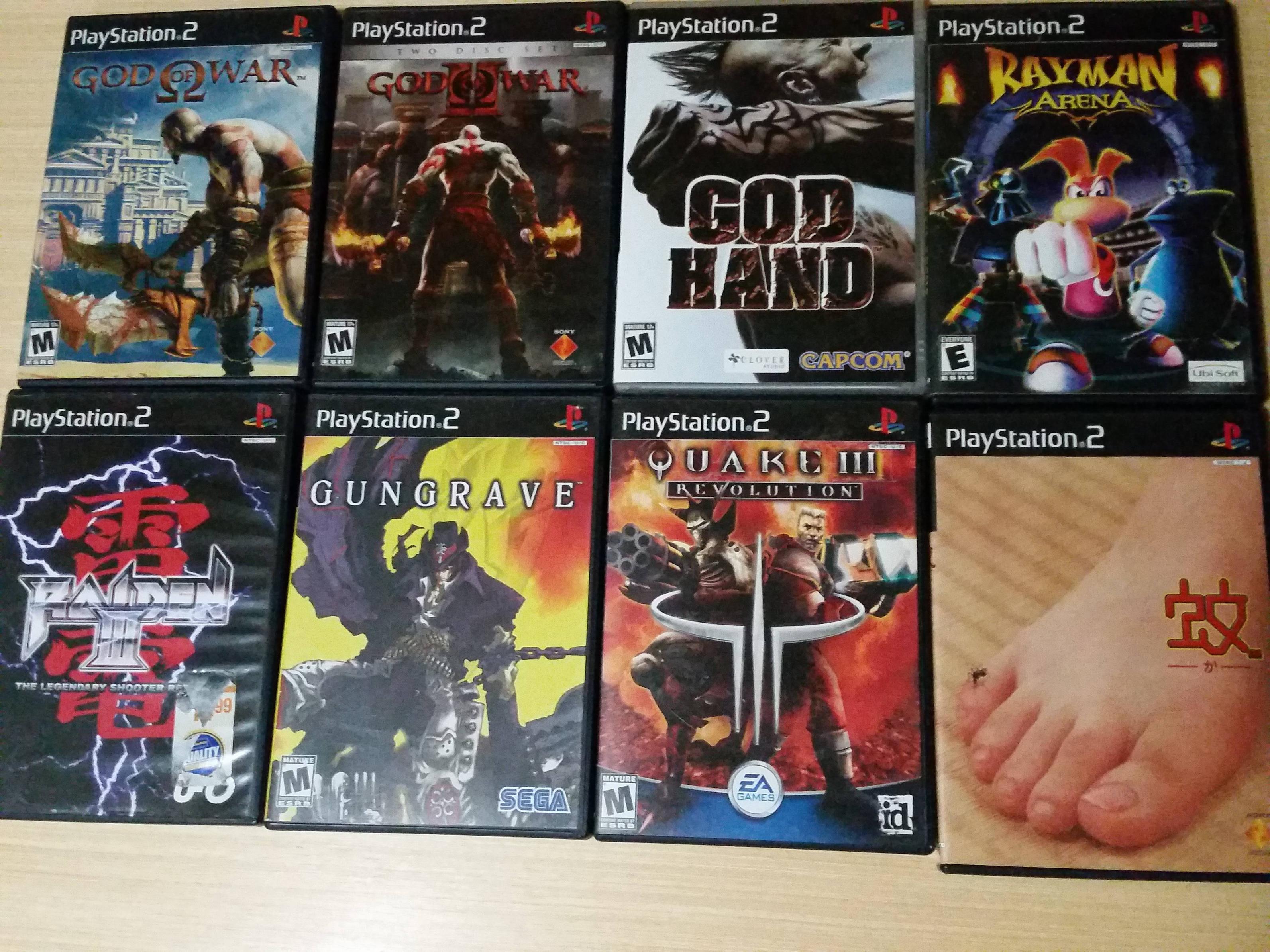 God of War started here and boy it went far ! Amazing action games . God Hand is a hidden gem , a classic I tell everyone I meet about , its a brawler with slapstick dark comedy, buy it if you find it. Raiden III is another great schmup , Mr. Mosquito Japanese cover is pretty crazy ( like most JP games are) and also uniquein its gameplay , I never played an mosquito trying to suck blood from people in other titles. Gungrave is a shooter/brawler based on the anime ( I like it). 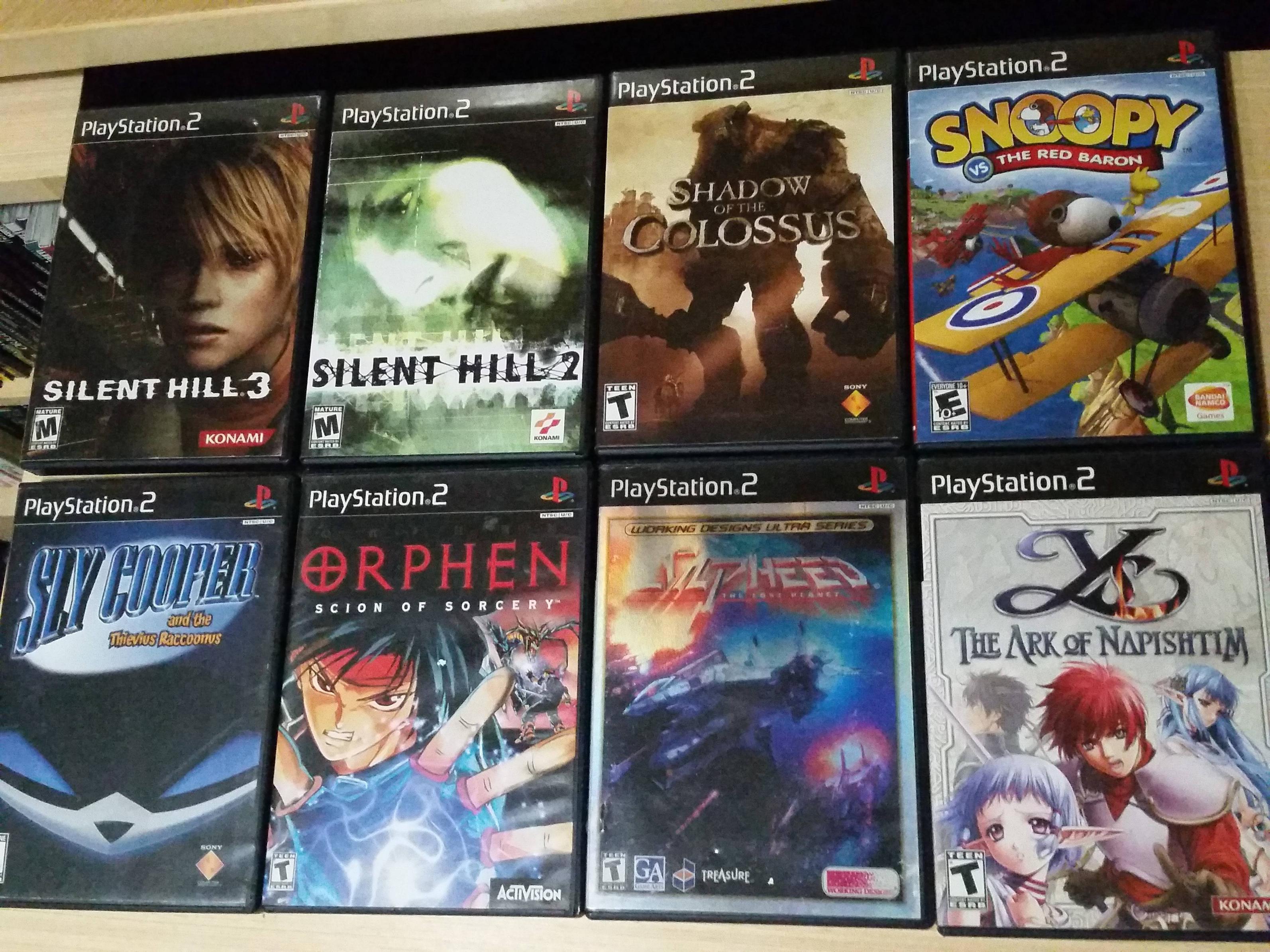 Silent Hill 2 was the definitive horror game of the PS2 era for me (also the extra endings were great) , although Silent Hill 3 was a very nice game I never felt lost in the dark parts of the mind ( it also felt more action oriented).

Silpheed is the coolest PS2 cover I ever saw ( the game is also great), YS : the Ark of Napishtim is a nice action/rpg !

Shadow of the Colossus is a must have title in any PS2 collection. 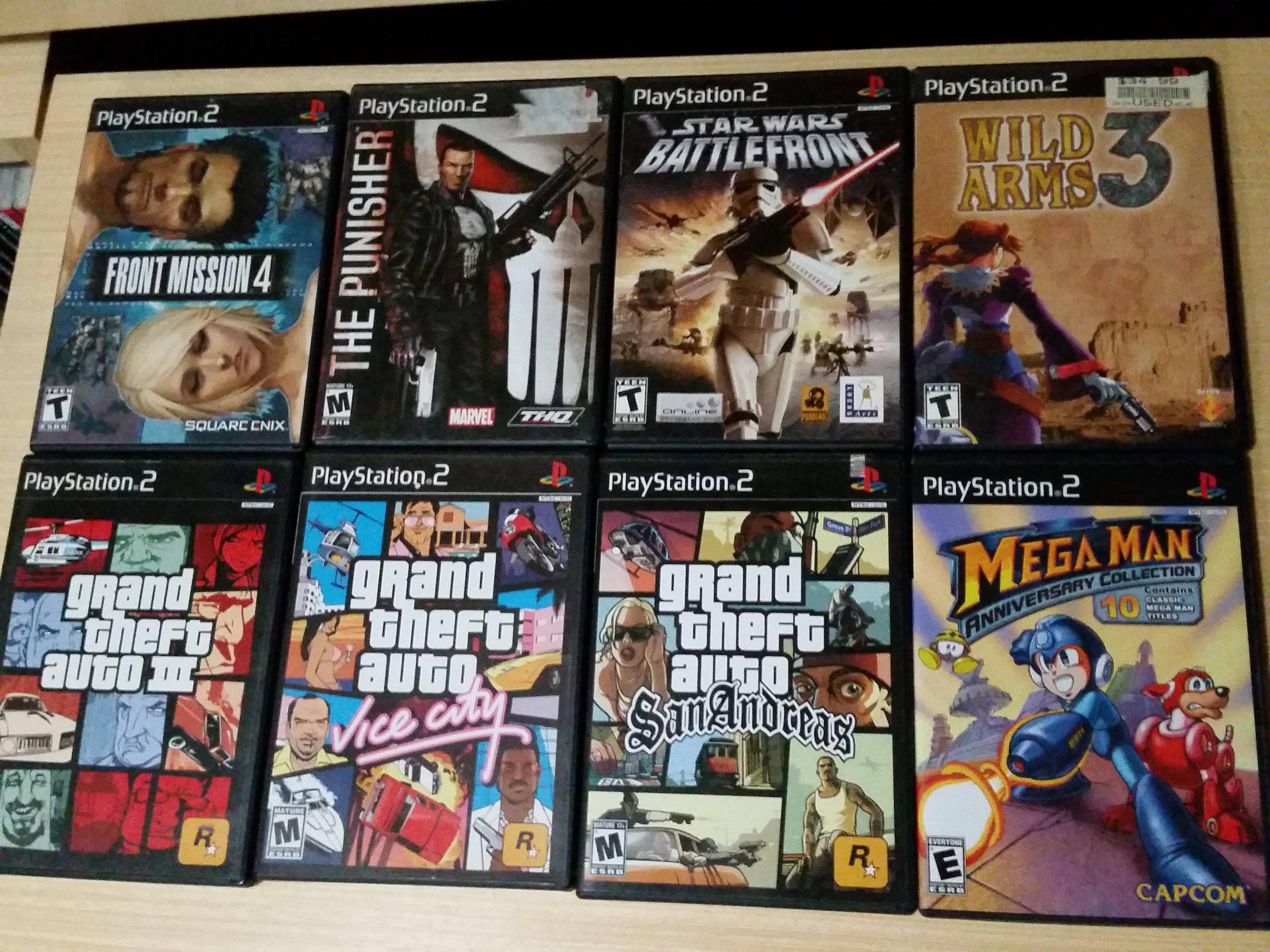 Front Mission 4 continues with this game series that endured since the SNES era, GTA titles were all the rage back them (but my brother was the one that really loved them). Mega Man Collection is the proper way of doing a collection ( damn you Capcom !). Wild Arms 3 was a nice RPG but I still love the first one more than it. The Punisher is a great third person shooter ! 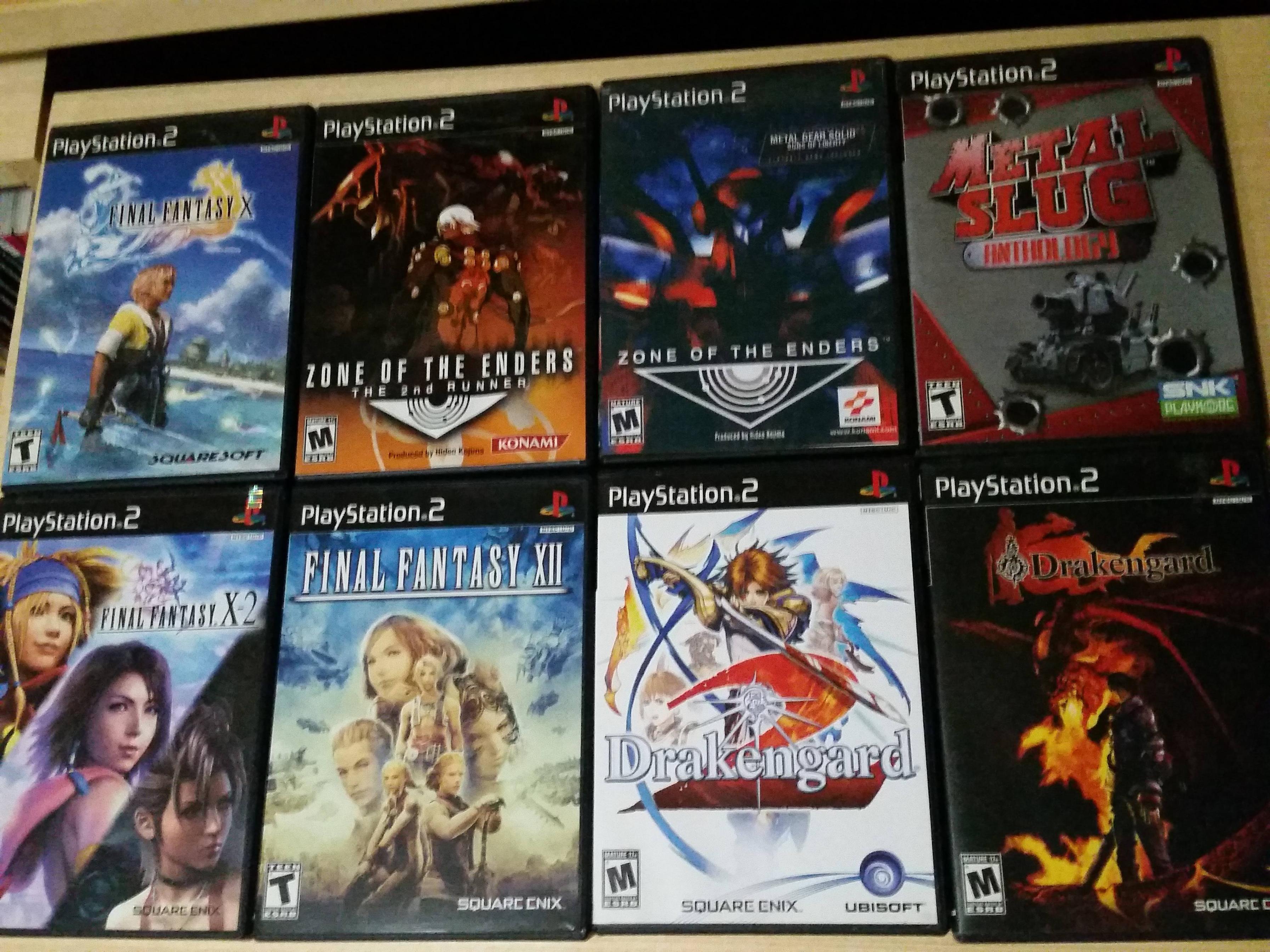 The Final Fantasies of PS2 era where great , this may sound strange to some but I loved FFXII its my favorite entry in the series gameplay wise, the international release made it even better. I also ignored Van for most of the game because those abs were not real and you can't trust people that use fake abs, those are Ondore's Lies. Drakengard (both 1 and 2) are great games but many people skipped them I recommend to at least emulating those, the gameplay is somewhat reminiscent of Samurai Warriors but the history ... DAMN its dark and edgy and cool you should at least read the plot.

Zone of the enders is a Hideo Kojima game , and it shows , it's also one if the best mecha games I ever played.

Metal Slug Anthology should be in every PS2 collection. 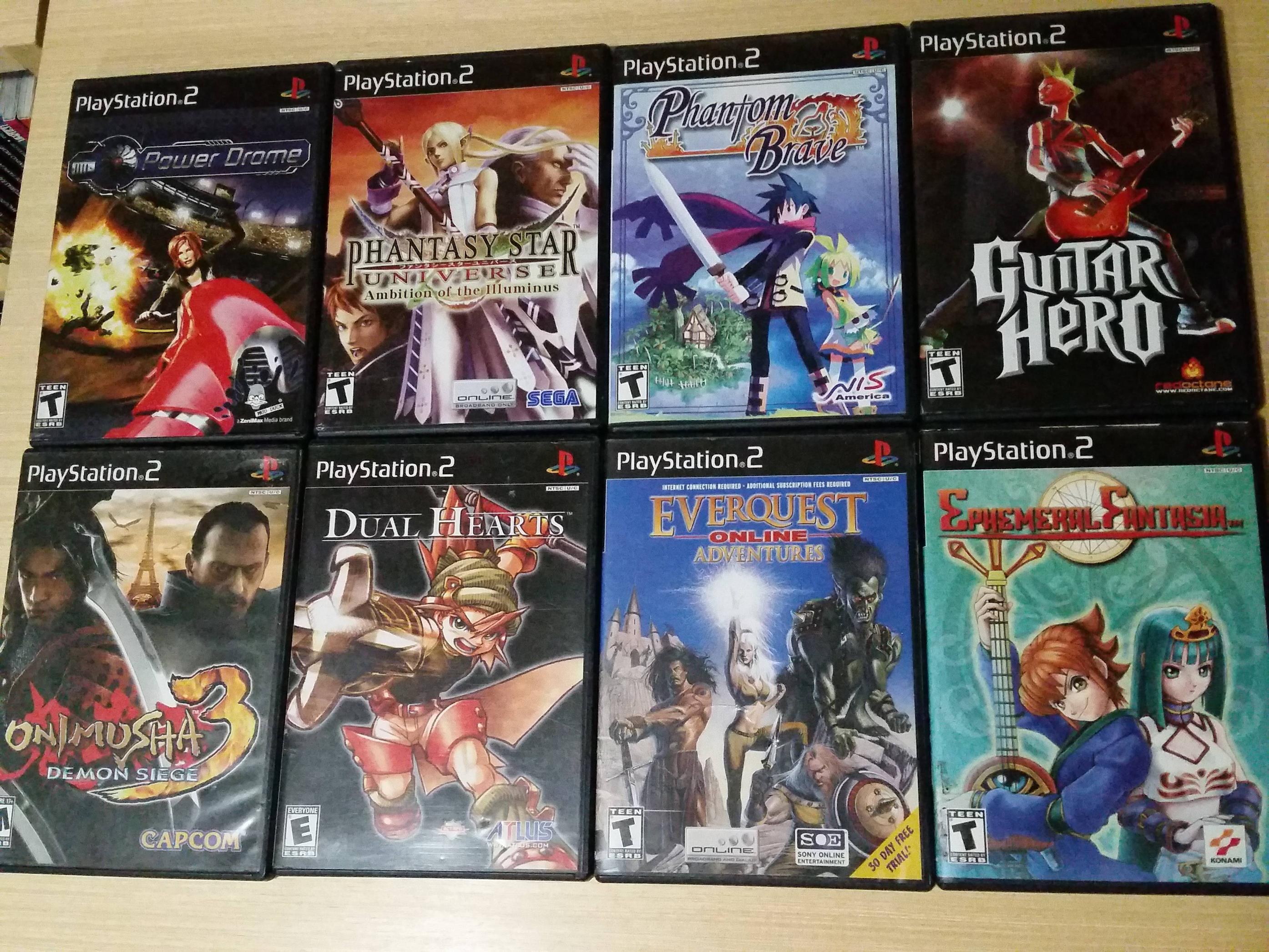 Guitar Hero is a nice music game ( I'm waiting for my copy of Guitaroo Man ) that started the franchise (and the plastic acessories rage), Phatom Brave is a lovely JRPG , Onimusha 3 is one of the best action games I ever played ( it also got a crazy intro!)  it really deservers a sequel. Everquest online is unplayable right now ( but maybe one day it shall be playable again). Dual Hearts in another great JRPG as is Ephemeral Fantasia  (from a time were konami made good games). 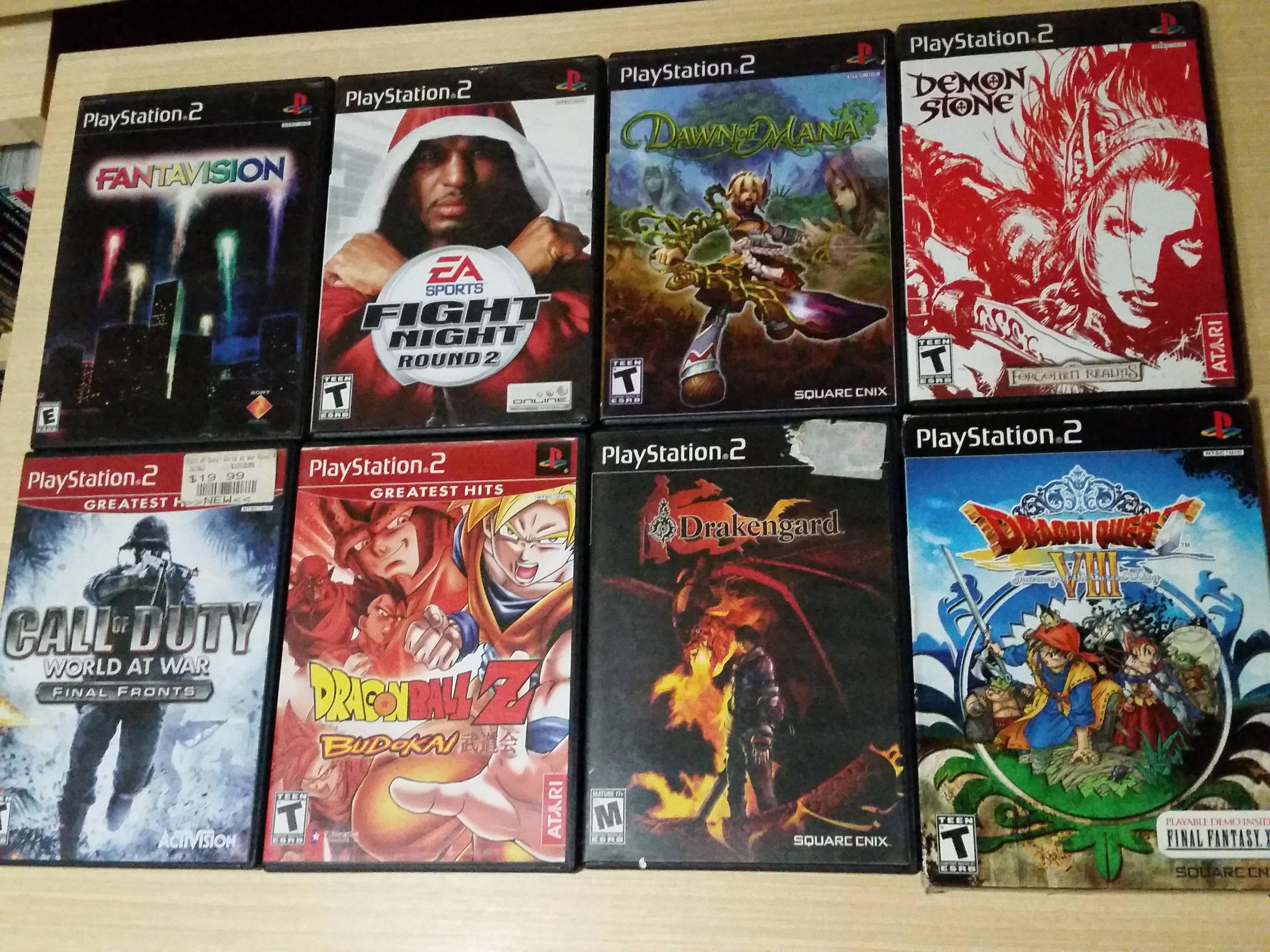 A extra copy of Drakengard , an special edition of Dragon Quest VIII ( totally worth it ) , Dawn of Mana ( from the SNES series Legend of Mana) and a D&D RPG with Demon Stone 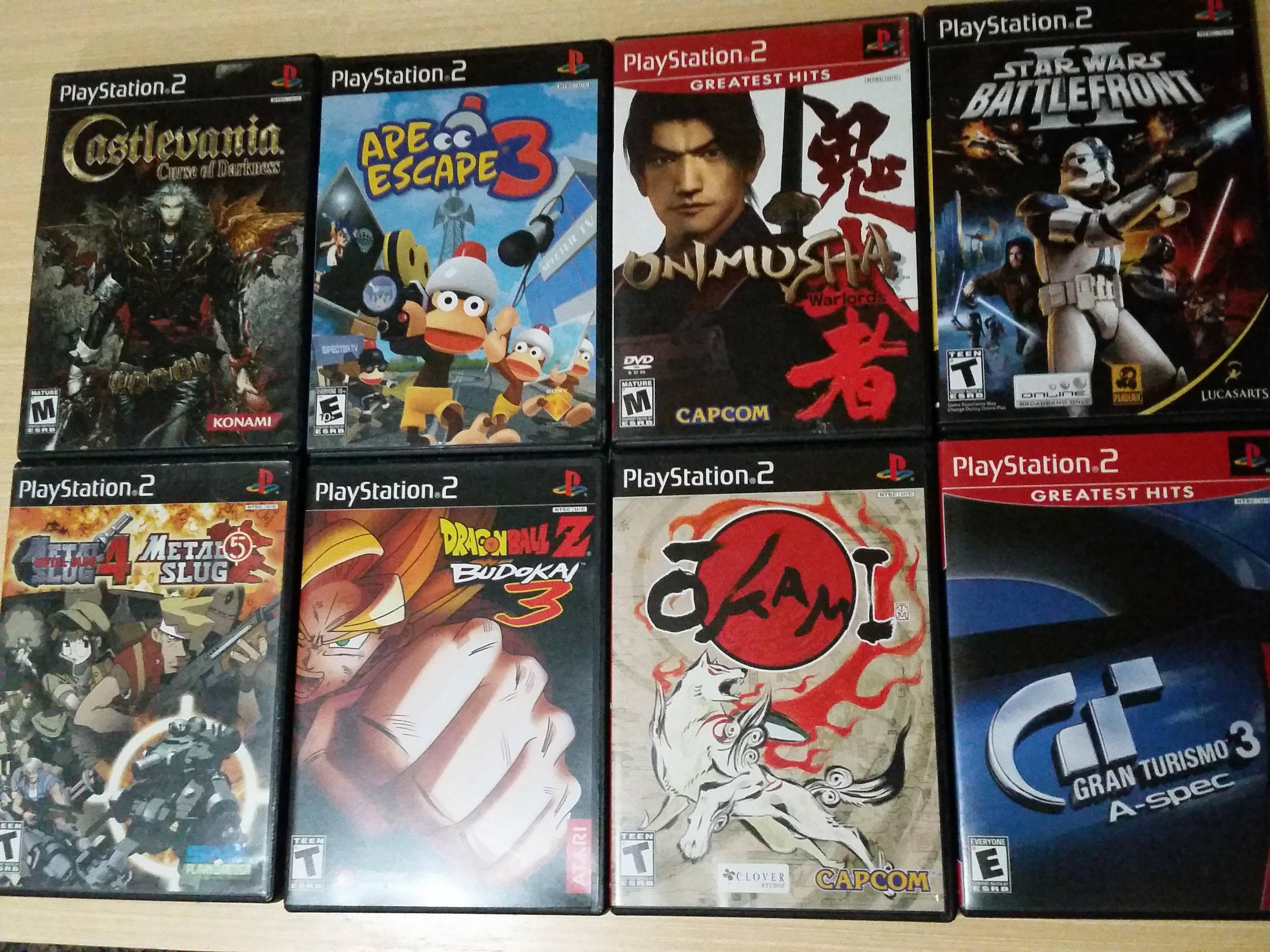 I loved Ape Escape before it went mainstream,  the first Onimusha , Okami which is the last game Clover made and Castlevania Curse of Darkness ( not so well received but I loved it). 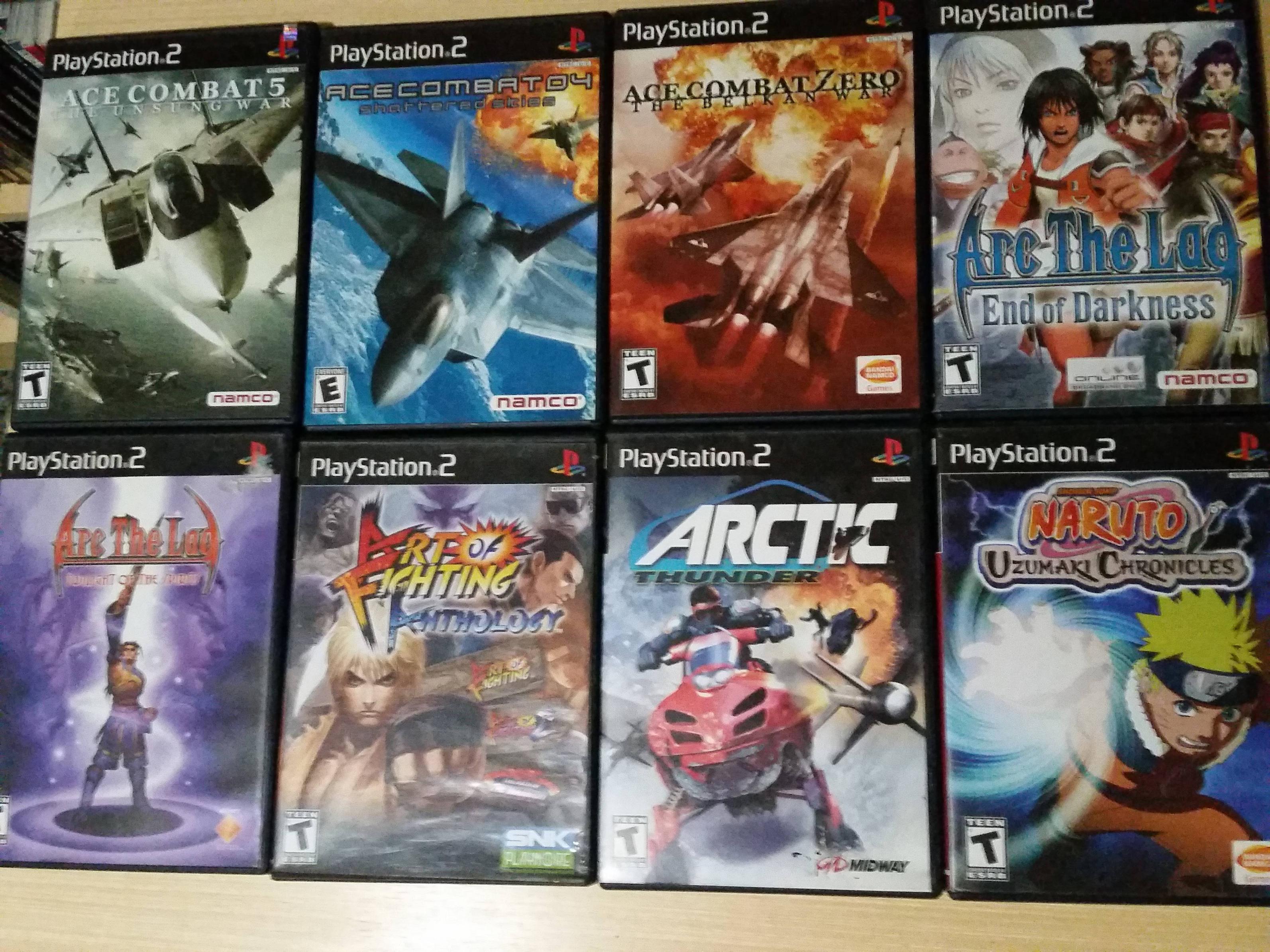 All the Ace Combat I could grab ! Some Arc the Lad titles to fight the cold nights and a Art of Fighting Anthology to punch the dust away. 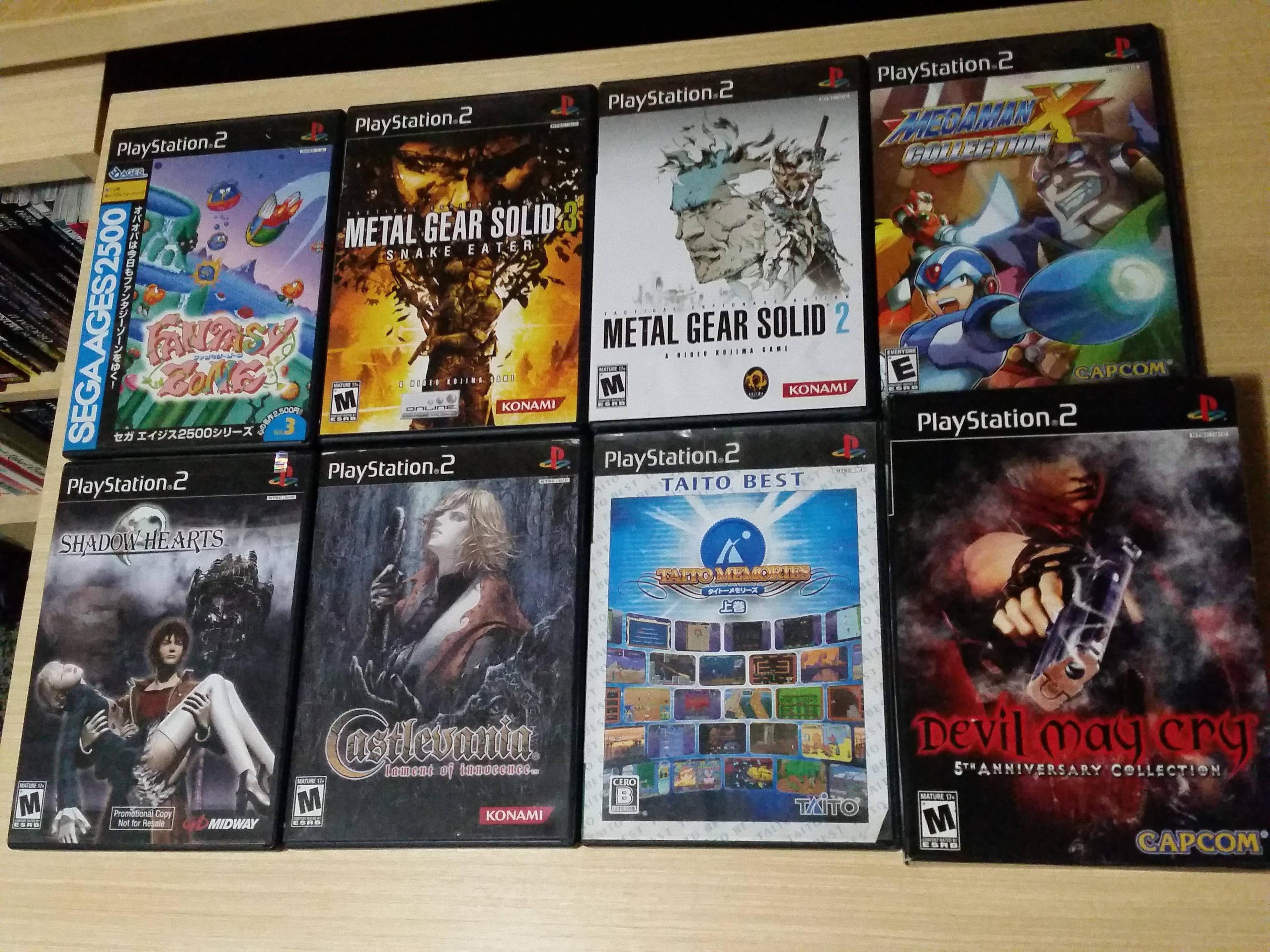 Sega relaunched lots of classics in the PS2 with the Sega Ages collection , Fantasy Zone was one of the very first titles,  Metal Gear Solid 2 & 3 ( which were reason for most people to get a PS2 in the first place) , and Castlevania Lament of Innocence ( the first great 3D castlevania) , Taito Best is there because I wanted to play PuLiRuLa .That Devil may cry collection has all the games, including the second one which I despise. Shadow Hearts is a nice RPG.

Another Megaman Collection ( X series) also well made , a sign Capcom forgot how to do these properly. 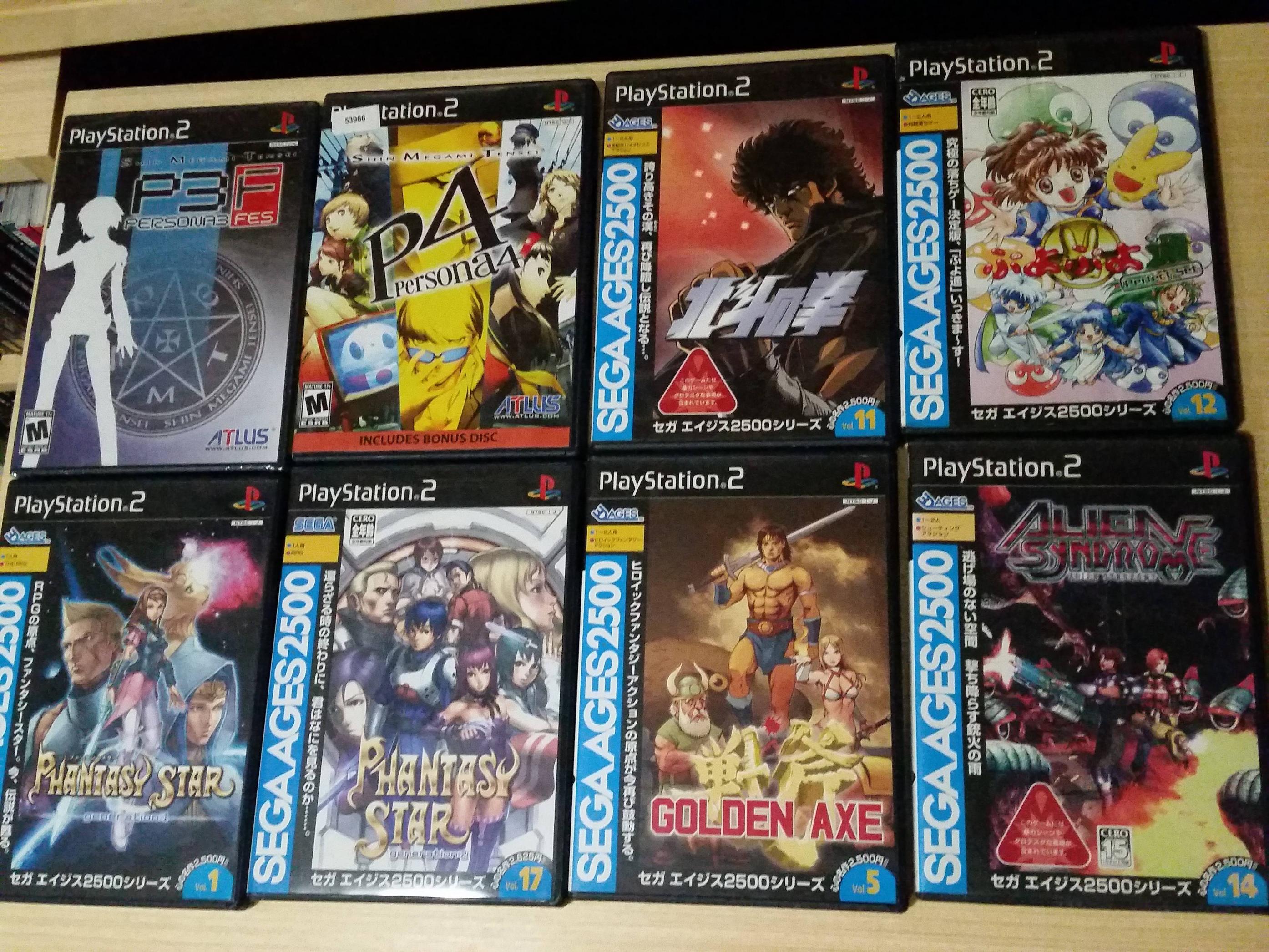 Lots of Sega Age exclusive JP titles , remakes of Phantasy Star , Golden Axe , Alien Sindrome , Puyo Puyo and Fist of The North Star. Persona 3 and 4 are there too ( I loved playing this series on the PS1). 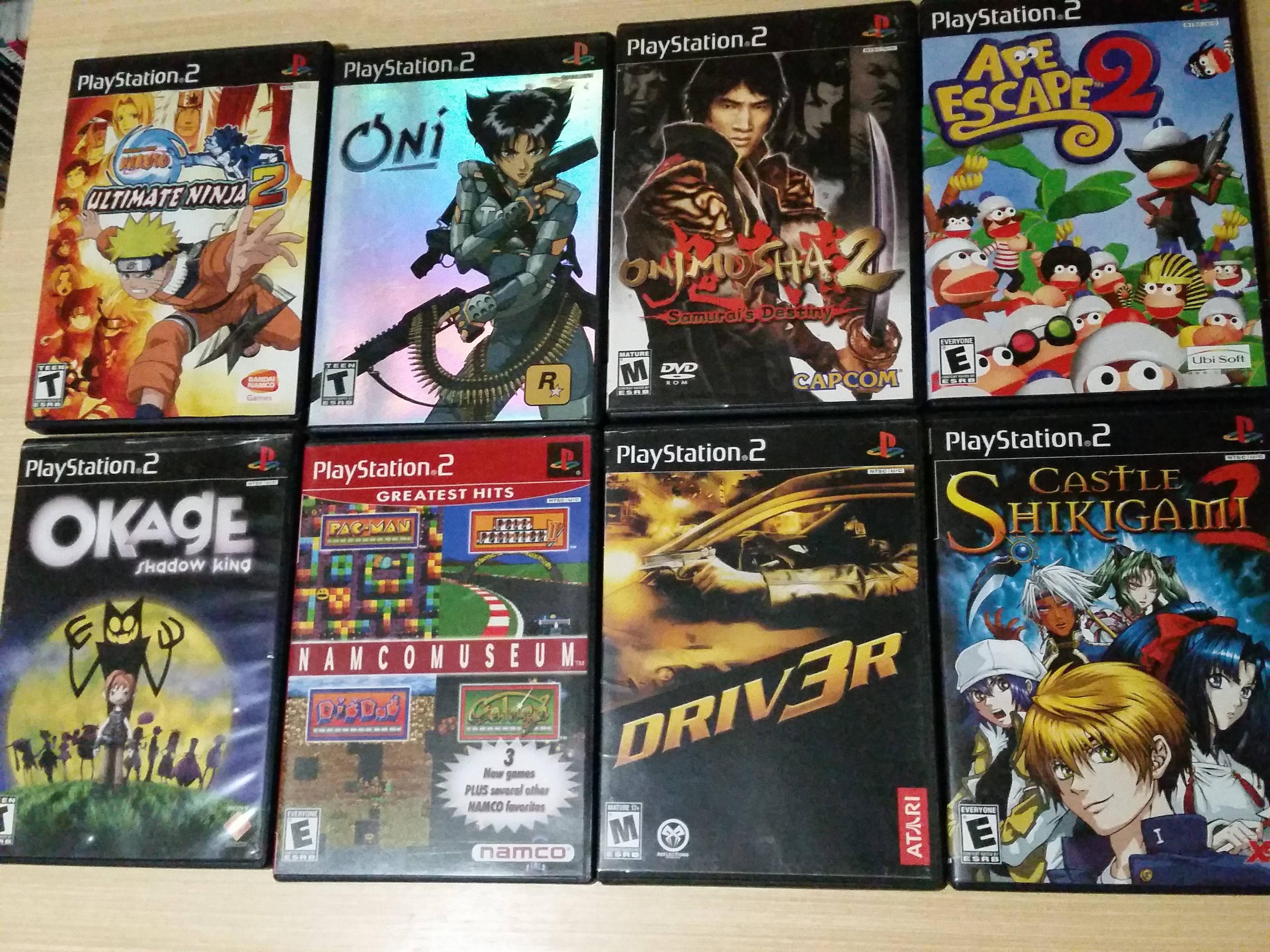 Oni is a great mecha game ! Onimusha 2  , Ape Escape 2 and Castle of Shikigami 2 are proper sequels to the original games. 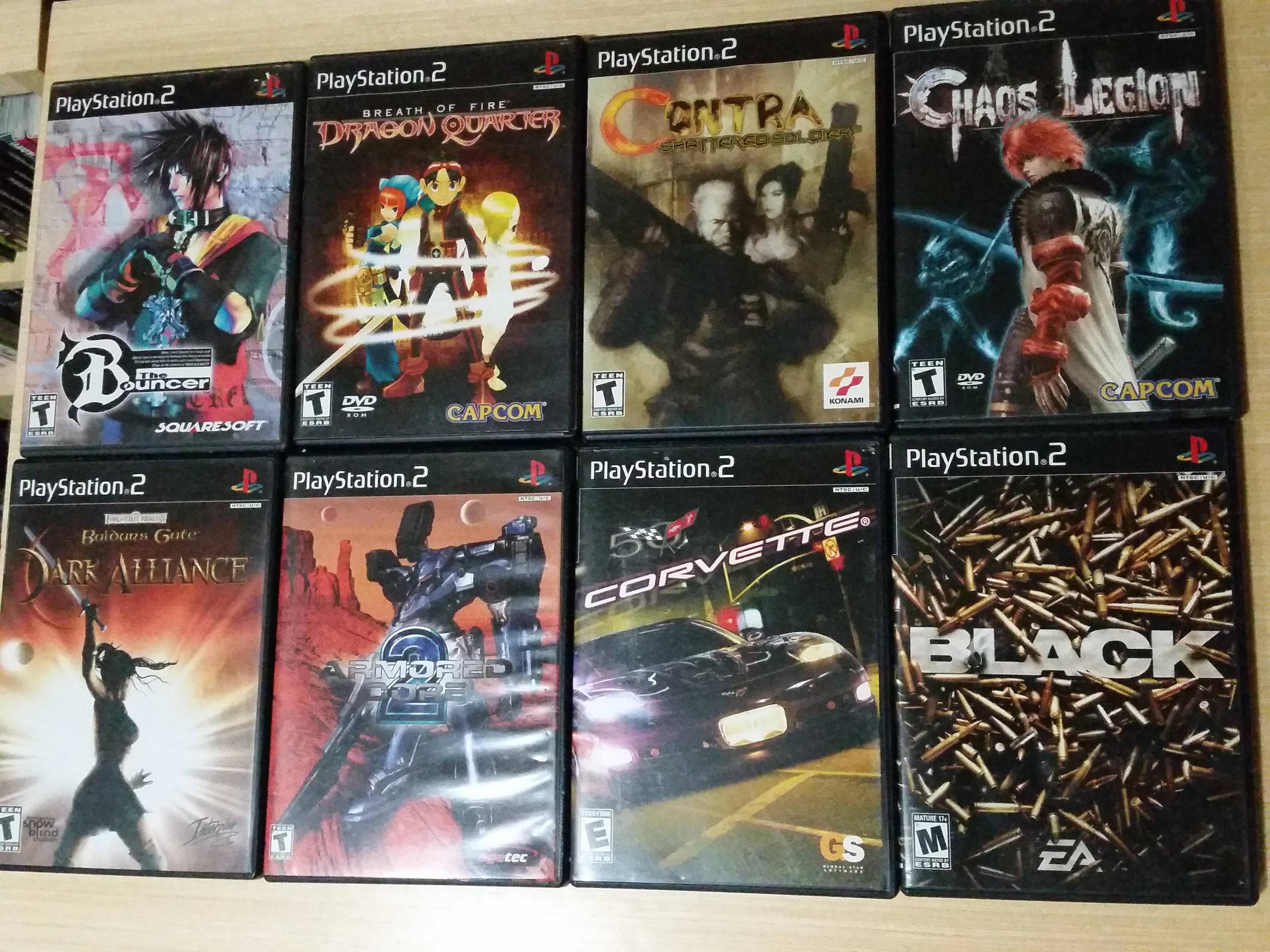 Breath Of Fire Dragon Quarter was the last time I saw a Breath of Fire on console, a nice game ( although many disagree over it) I dislike the restrictions over time and transformations though ( also using transformations properly theres no challenge here). Black was a nice FPS , Bouncer is a great 3D brawler ! Contra Shattered Soldier is a nice contra game. 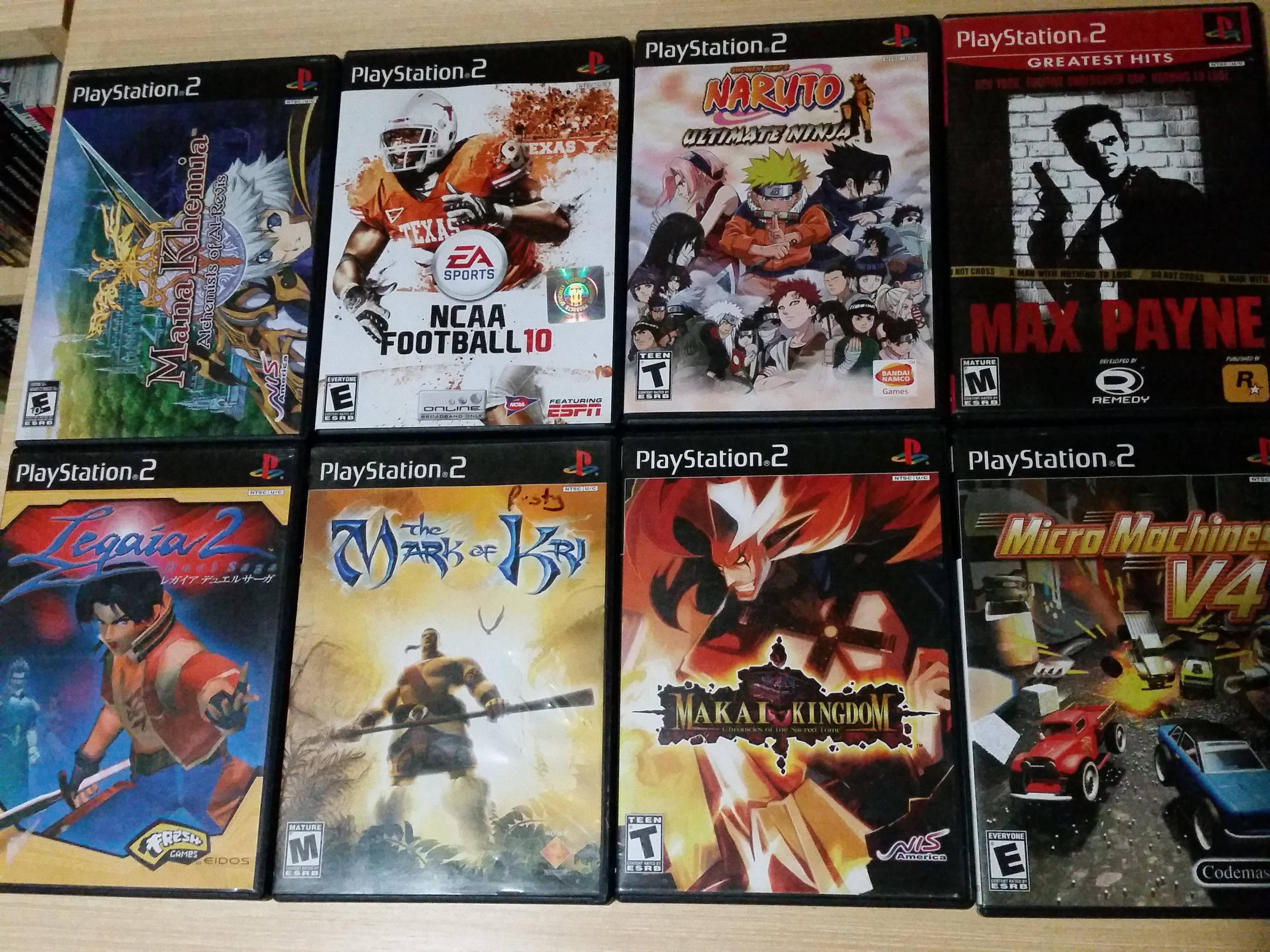 MAKAI KINGDOM is such a nice Disgaea spin off ! Please try it ! Legaia 2 comes after the success of the original one on PS1 ( a nice RPG) . Micro Machines is a extremely fun race game ! 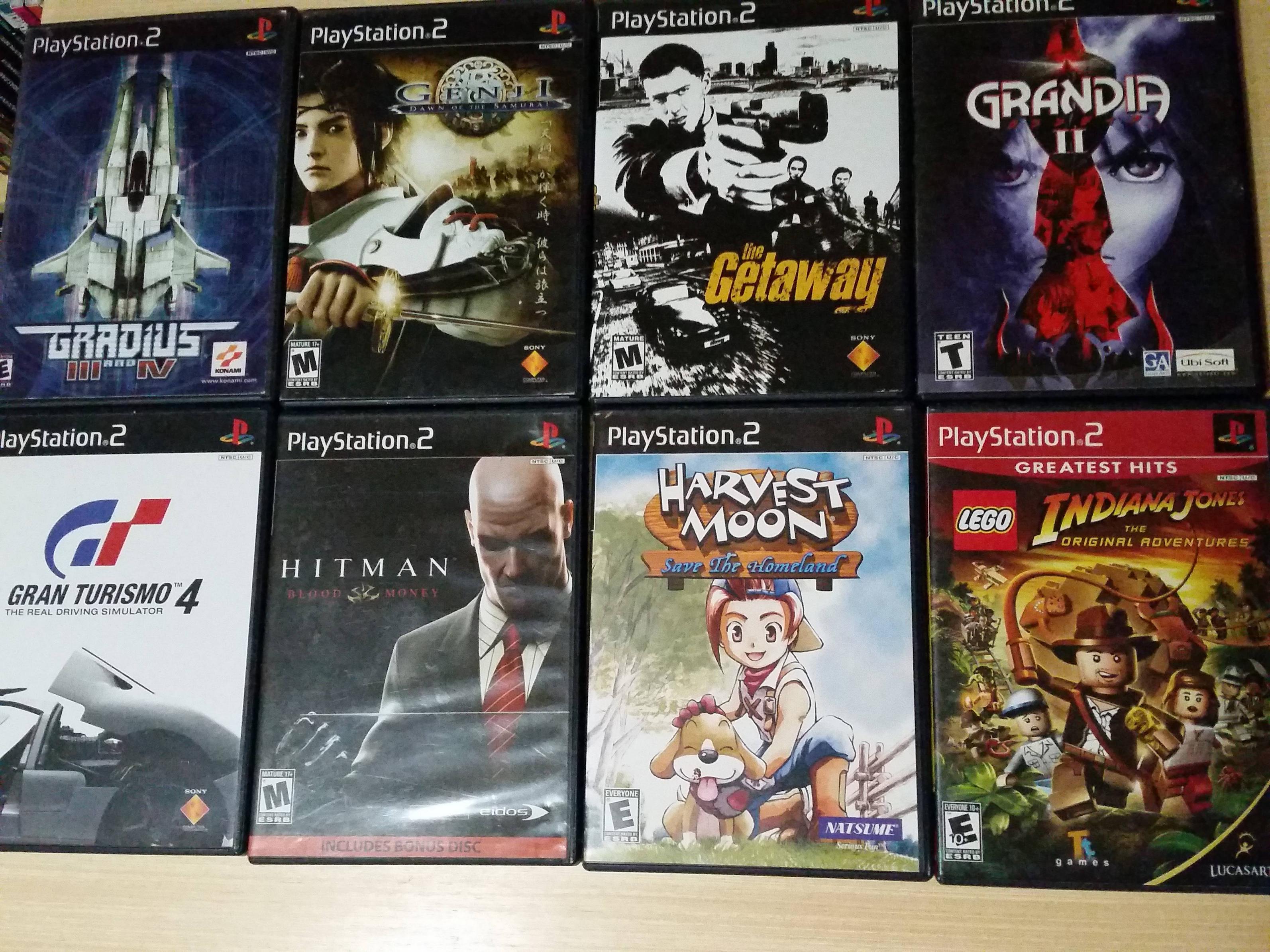 Gradius is a very well know shmup , along with it Grandia II was a well received game (but I still prefer the first one). The PS2 Harvest Moon was a nice farm game( loved playing it during rainy days for some unknow reason) . 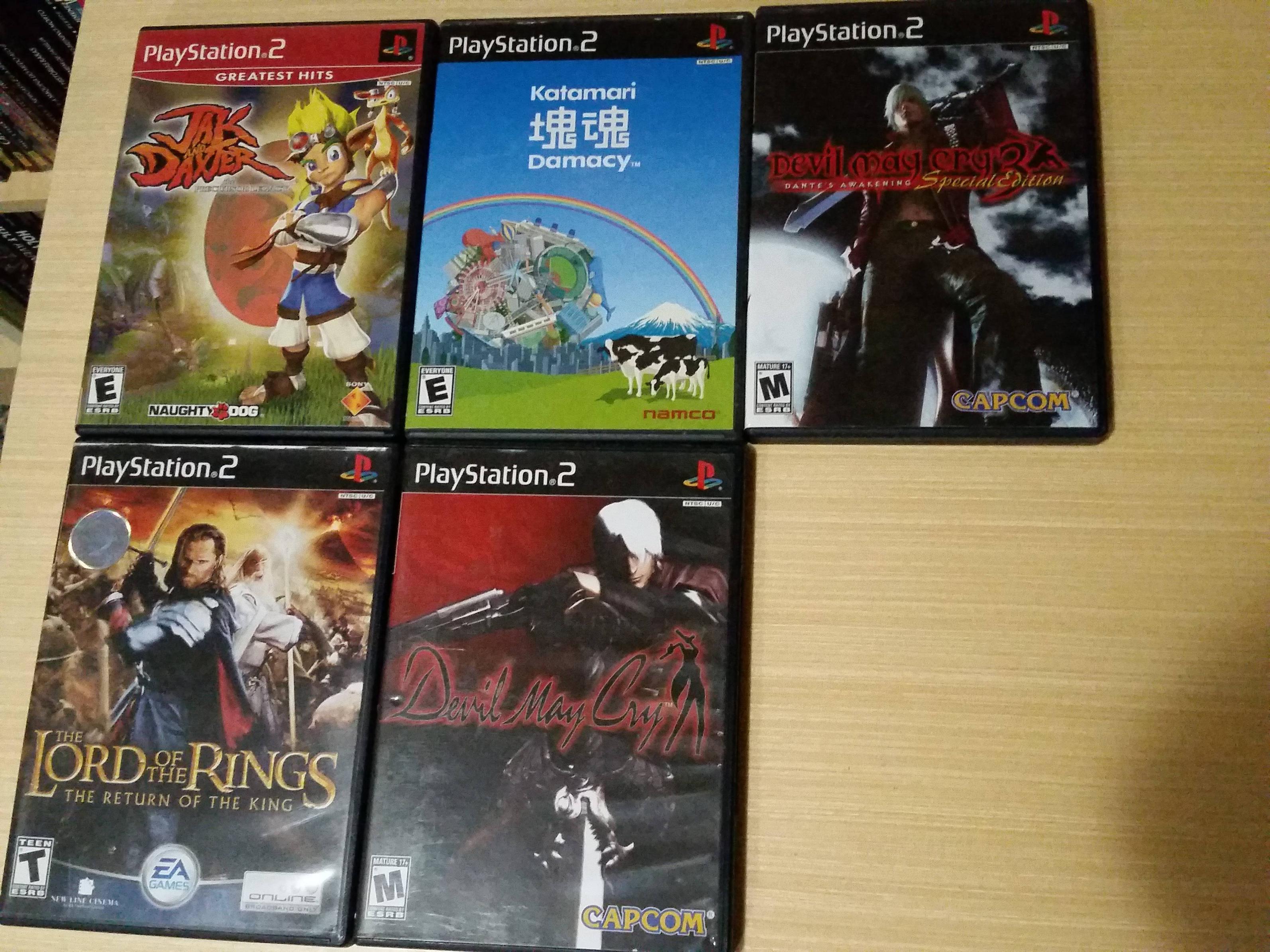 Some Devil May Cry Duplicates... and KATAMARY DAMACY , one of the best OSTs I ever heard !

EXTRA EXTRA , some games I forgot to post in other blogs ( that were hidden by ps2 titles) ! 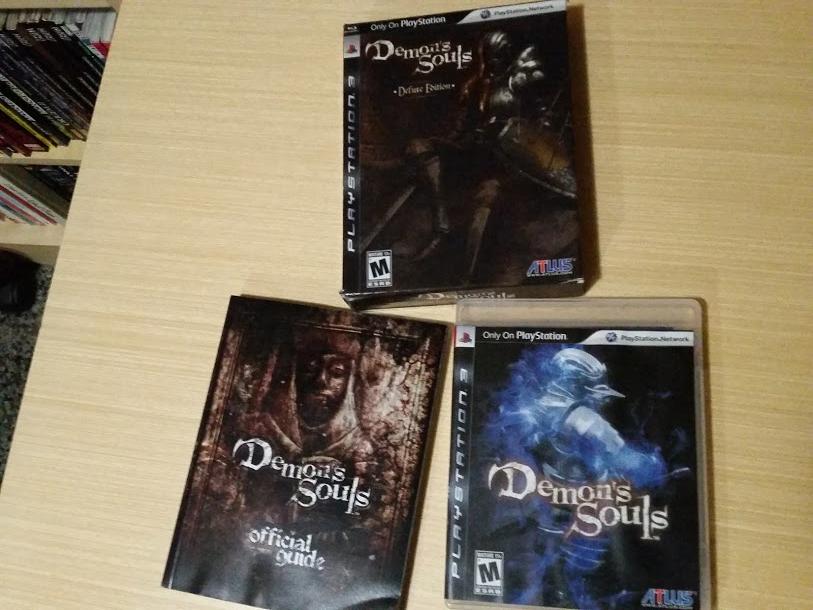 Demons Souls Deluxe Edition !!!!!! This one is uncommon . 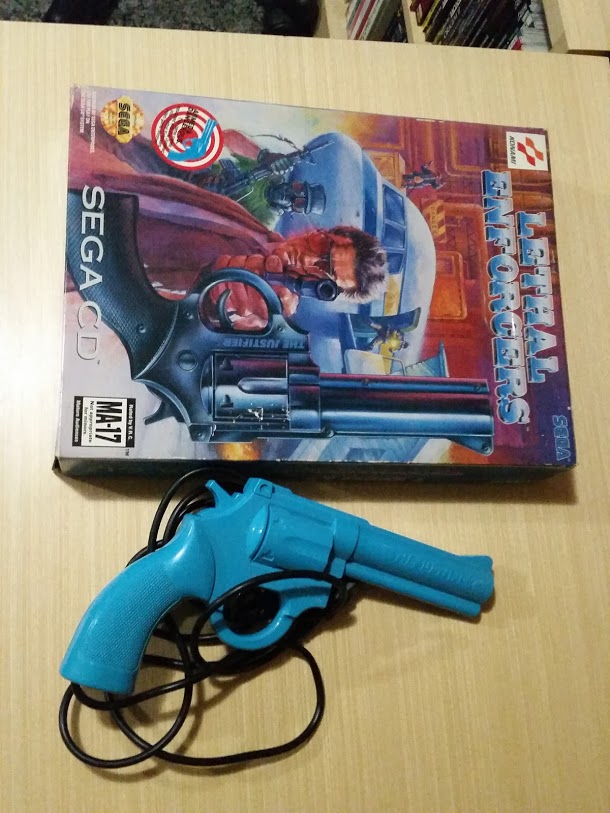 This One is rare ( especially with the original box ) , it was also considered extremely violent ( but it's kinda lame on today standards).

This one is one of my largest collections, I'm proud of it. Some games are rare but emulation has improved a lot so there's no reason for you guys to not experience those games.

Up next : The Dreamcast , the dream is not over yet !