Starsector Preview | My God, it's full of assholes!

While space is 3D, it doesn't mean that we can't have great 2D games about flying through the black void and shooting whoever we meet along way. And as far as space exploration and maraudery games go, Starsector can hardly be beat. It's essentially a Rogue Trader simulator.

The lore of the game is somewhat sparse. Dominion was the big human space state that collapsed as all great human space states are wont to do. The constituent planets wasted no time in devolving into infighting and other post-fall unpleasantnesses. It didn't take long for new factions, such as the militaristic and formed-by-a-Dominion-legion Hegemony, to emerge. These factions clash with each other from time to time, and pirates are just lashing out at everyone. And where the fire of civilization dims at the edge of the colonized systems, there lie opportunities for explorers who are willing to risk it all and chart some rocks. 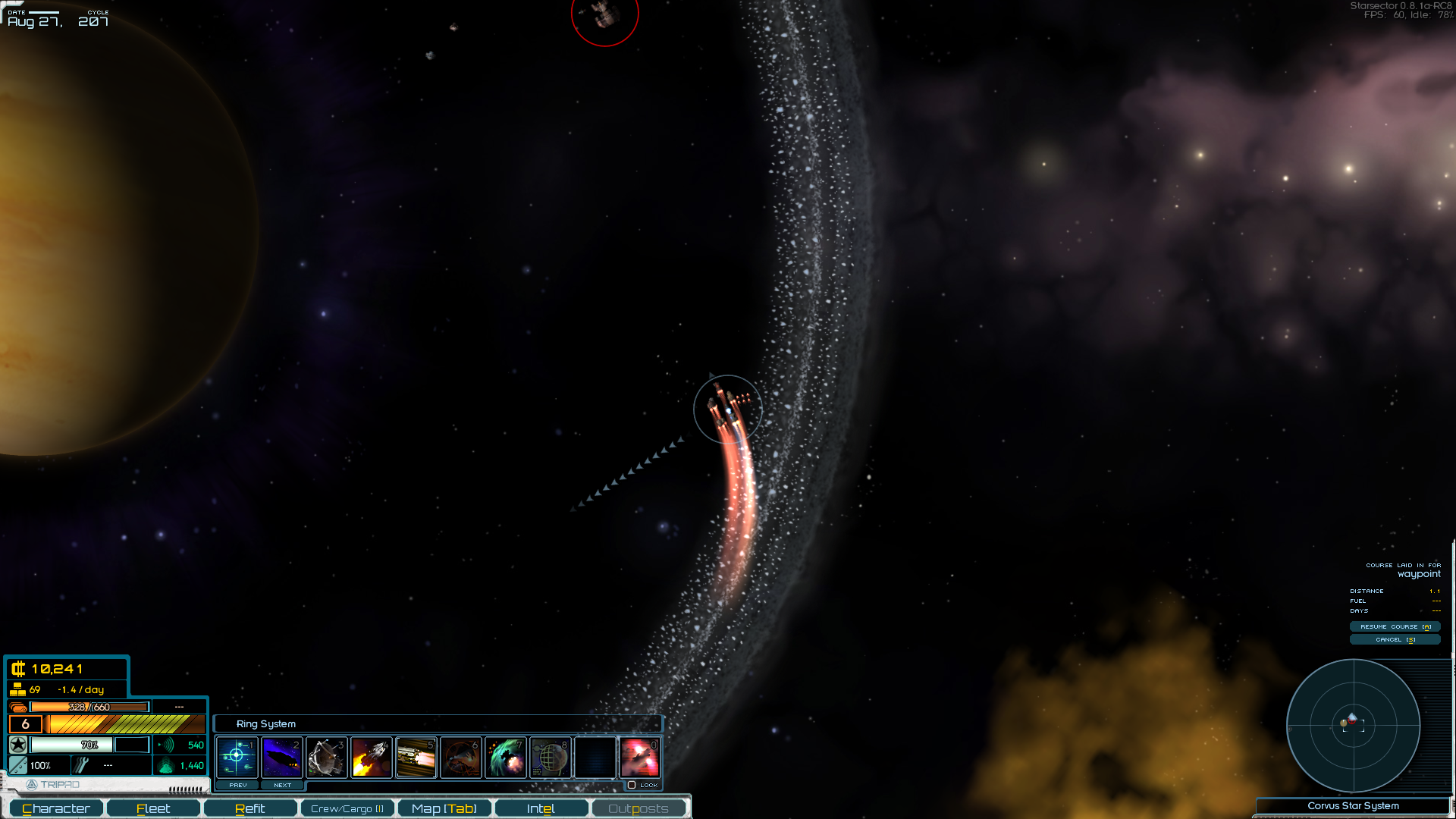 Space map shows a miniature version of the fleet contents. They're accurate enough to identify the ships at a glance, though whether the fleet is moving towards or away from you is all that you need to know.

At least in the build I played, the player has the choice from two ships (corvette is the better one) and two companion ships (drone carrier hands down) at the start. Luckily, the choice of portraits is a bit deeper, which you'll appreciate if you're going to play the game on iron man. Death and ruin comes fast in this sector of space, and you will be restarting the game time and again. Fortunately, the tutorials do their job in explaining all of the systems while also leaving you with knowledge of a certain spaceship graveyard that you will visit to cobble together a more respectable starting fleet.

On the space end of things, you will act in the travel map, where your fleet is moved and acts as one. Most if it is done via mouse click. You'll also have a toolbar of abilities to activate (usually by hotkeys), and their use and mastery is important. Pirate players will need to learn when to turn the identification transponder on or off, while everyone will find a lot of use in getting the hang of cruising speed, emergency burn and interdiction bursts. Those three make ship interdiction (or running a way) a much more complicated thing than it is onther games.

In battle, you will be able to directly fly one ship (via WASD) and command others via a tactical map. You won't be able to micromanage relentlessly, as the command channel system will make you consider how and when to use your limited capacity of command. The way your ships act will be also informed by their captains – while you don't need any in your fleet, they do however bring in both their levelable skills and different stances in battle. For example, an aggressive pilot will want to move in even with his unshielded trader, while more timid ones will prefer to hang back. 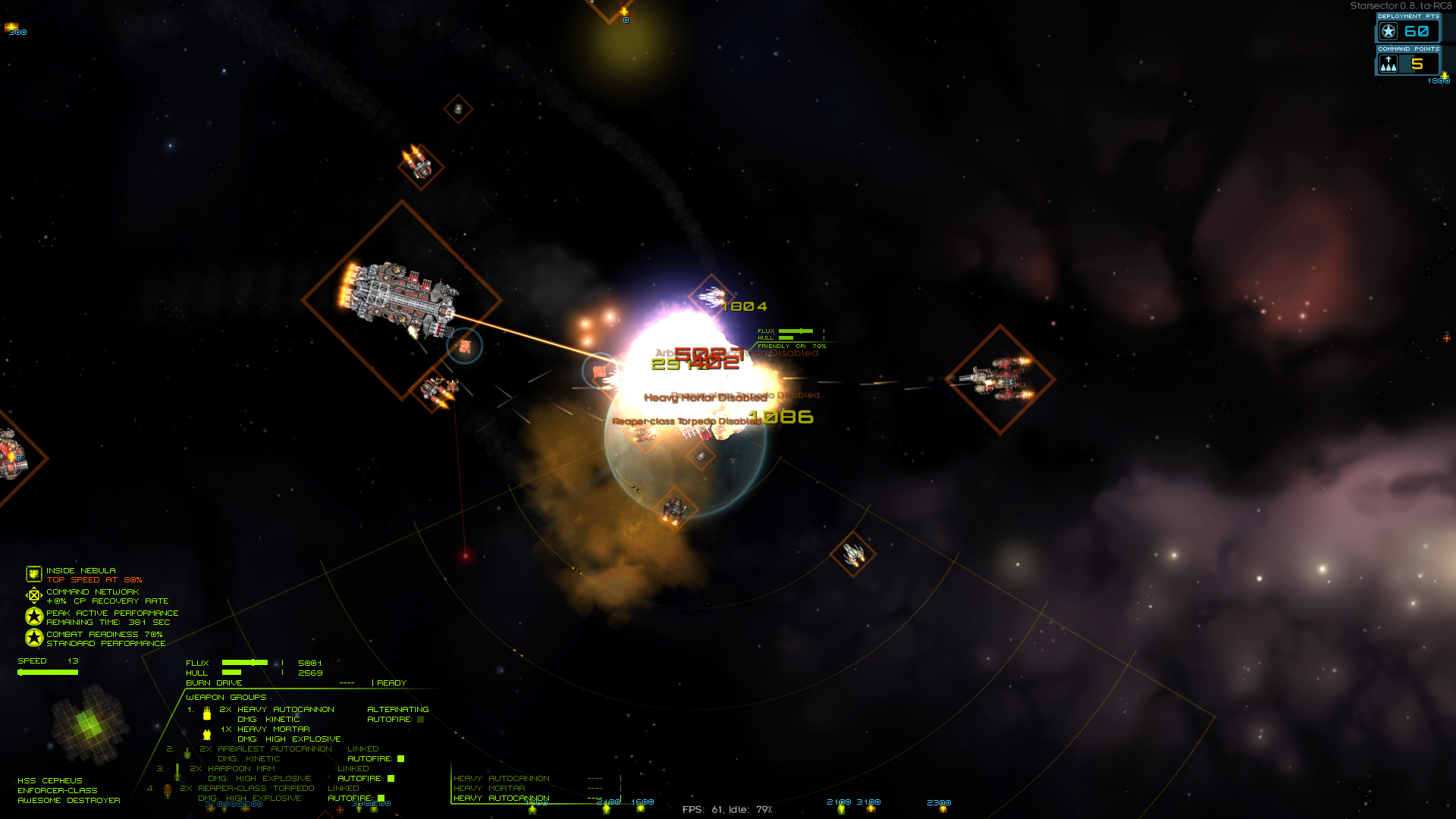 A lot of battle revolves around flux management (which would be called “heat” in some other game). Flux accumulates as you fire weapons and soak hits with your shields. If you let the bar fill, your ship will shut down for however long it takes the flux to dissipate. This what we in the space industry call “A Bad Thing.” Even a single enemy can mess you up in your powerless state. Multiple ones will just cut your ship to ribbons. Meanwhile, trying to overload the enemy via shield hits will be as important as shooting their ship down. Of course, even then it's not easy, as AI is really mindfull of flux management. And even you manage to temporarily disable a ship this way, some vessels will have a lot of armor for you to strip before you reach the juicy hull hitpoint filling.

Fortunately, ship systems will start going haywire long before then. Ah, but you can't overstay your welcome in battle, too, as being in the presence of the enemy in decreases the ships combat readiness, which can and will lead to systems malfunctioning. If you notice that one of your three engines isn't firing anymore at the end of the battle, it's because readiness degraded a lot and it suffered flameout. This prevents grinding battles of attrition as well as attempts to bait-shoot-retreat from the enemy.

After the battle, you will be thanful for having that drone carrier (or some other salvage ships), as well as skill points invested in salvage. Vessels disabled in battle don't always explode, so you might be able to salvage them and add to your fleet. However, they are likely to have damaged systems, sometimes to the point where you will leave the hulk of possible cruiser (which is a big deal when you start the game in a damn frigate) float around since you judge it unusable. Or you'll break it down for scrap, but that's not that's not really exciting. Renovating a ship costs a lot of money – in fact, more than it's worth new – so doing that is reserved for really kickass ships that are super rare. 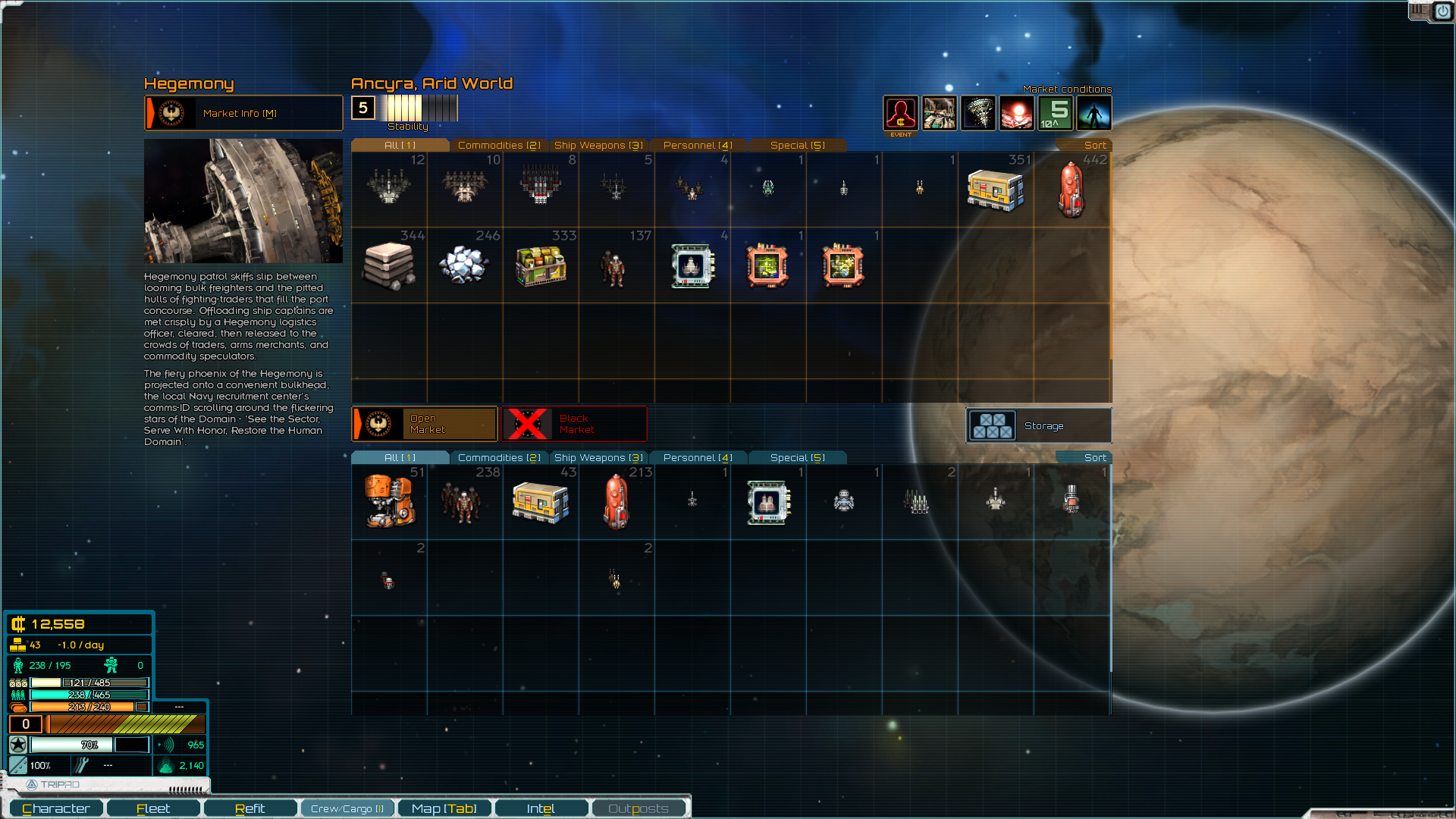 Trade screens also give you access to all of the pertinent information about the planet via the icons on the top right - neat!

I have mentioned Skill Points - they exist to feed into your character's skill system. When your space captain levels up due to all the experience he or she gained through space shenanigans, you get one (usually) skill point to spend on learning or improving skills, or unlocking more of the skill tree. The skills are separated into 4 skill lines, and both skills and skill lines have levels. This means that sometimes, you will have to sink a point into leveling up the entire line instead of the skills themselves. It is partially in skills where you decide the type of game you will play. One tree improves the way you handle your personal ship. Another works on leadership, benefiting carrier operations. The third one is dedicated to technology and making your fleet more efficients and resilient. The last one is about industry, which basically means salvage and space exploration.

When I said that you can a be Rogue Trader in Starsector, I wasn't kidding. Space is your oyster, and you can fight, explore and/or trade (though even the last two will involve some fighting). Planets will sometimes announce general bounties for pirate ships destroyed in the neighborhood, just like timed bounties for specific fleets, while captains that hitch up with factions will be rewarded for hunting down the enemies of the state. Trade, however, isn't easy. The game flat out states that the tariff (30%) makes trading hardly profitable, especially when you factor in the consumables, such as fuel and supplies. This means that you will have to be really smart in mapping out which planets sell what and what they are currently lacking.

One of the best routes to fame and fortune go through supplying famine-suffering planets with food and taking on trade missions. However, famished planets will only need a certain amount of food, and some planet will send a supply convoy sooner or later. The world doesn't wait for you! Meanwhile, trade missions will usually demand that you deliver a great deal of some good to some planet, and fast – here's where the knowledge of resource rich planets pays off. 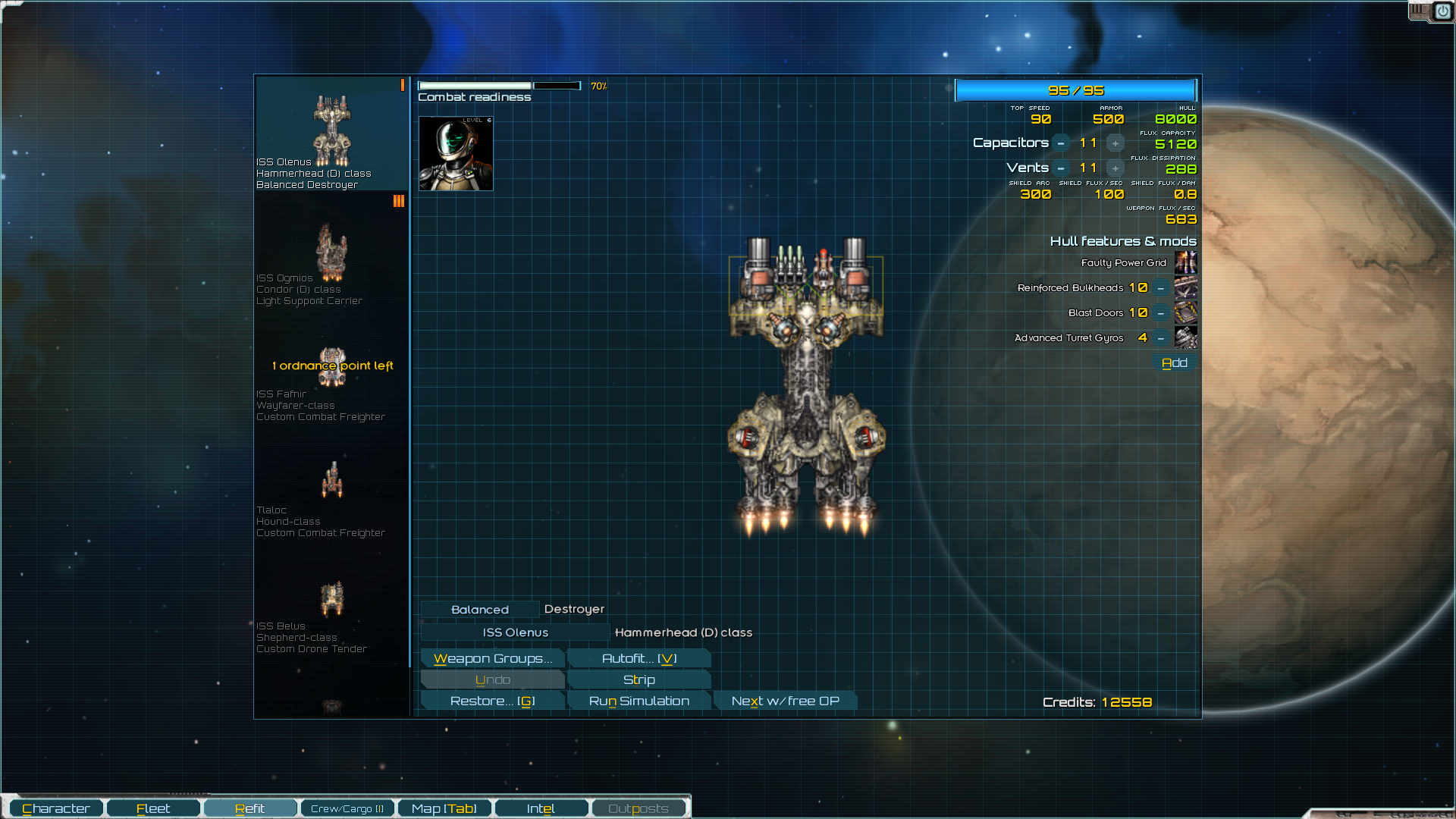 It's a little banged up, but it's still a destroyer!

Exploration, on the other hand, will demand a lot of preparation. While the mission will hint at how much fuel your current fleet will need to get to the destination as well as how many days the trip will take (so that you could plan how much supplies to take), you better stock up to the gills. In hyper space, you might run into hyperspace storms (which both damage the fleet and slow you down), and system exploration might not be as easy as you planned – as well as providing you with exciting detours (and God help you if you plan to do planetary exploration). Running out of supplies will wreak havoc with the readiness of your ships and they will start to break down while a fleet out of fuel will drift to the nearest system, where it will be able to signal for help, praying that it won't be pirates that answer (it will likely be pirates).

Starsector looks great, too. The fleet might appear small-ish while in space, but the ships looks awesomely detailed in battle mode. The hulls are quite memorable in shape, too, so you will learn what to fear pretty fast. The interface is very clear, and full of helpful features, like the fuel estimates for exploration missions, or showing detailed pricing of the goods, including tariffs and prices at recently visited places. The game even has autopilot for those intersystem flights – you only need to have enough fuel and to step in to doge pirates or storms. The sound design is OK: while the game doesn't feature voiced dialogue, I can't complain about any of the other audio. I have yet to start fearing the interdiction ping, but I'm getting there.

Trade, exploration, fighting, piracy and smuggling (which is a cool system I didn't cover) – Starsector is about to become a great Rogue Trader simulator. Few rogue-ish games have caught my attention as much as it has. You fly, you die, you fly again! The only game where I restarted playing more is Weird Worlds: Adventures in Infinite Space, and that's high praise coming from me!