Ok Guys, here's the premise. I read a shitload of game magazines...its taken me many years to amass the knowledge that is in my brain (however trivial it may be). I was sitting on the can today before coming to work reading EGM #58 from way back in the day, May of 1994 to be exact, and it struck me how brilliant it would be to list the reader's choice top ten and get a laugh out of it.

I shit you not people, I have the magazine right in front of me and got a great chuckle from it. I hope you do the same, I promise this'll be the only time I do this, but I couldn't resist putting it up here because it was so ludicrous.

Robocop Vs. The Terminator / Genesis

"A cop with more on his mind than just a jelly doughnut." Did Robocop even need to ingest any food? i thought the only parts of him that were even human were just parts of his head? Anyways, off topic I guess. I only played this game on the SNES and wasn't impressed in the slightest. But looking at the rest of the list, you'll see that this is a shot of diversity.

"Maybe this section should be called Fighters' Top 10?" Who remembers the DULLARD code? You really have to give it to Genesis for allowing blood and gore in their games, no matter how cartoonish. I didn't care, I hated the SNES version's lack of blood and gore, but you gotta remember that I was 14 at the time and that's all that mattered to a teenager.

"You won't find any of Barney's dino friends here." Never played this one, but I can speak from experience that it looks MUCH better than the edition that I actually bought for the SNES. It was your typical side-scrolling fare much like Robocop vs Terminator up there.

"Another SF2 version made the chart? Be still my heart." Aw man, this one spoiled the surprise waiting for you up at the higher numbers! Keep reading and you'll see why I was laughing so hard. Seriously, this list is FUCKED! But on a more serious note, one of the few games that you REALLY needed that 6-button Genesis controller to play on, unless you want to hit start to switch between kicks and punches. "The version CD owners have been waiting for." If you don't mind waiting 8 seconds for a match and sometimes having the CD access while you're in the middle of a match (causing it to grind to a halt), or the excessive pixelation. This was actually a good port of the original arcade version. Yes, yet another fighting game, and another version of Mortal Kombat, whoopee! This makes what, 3 out of 10 are fighting games?

"FX technology makes this shooter an eye-opener." No argument here, I loved playing Star Fox, especially how it made my parents wiggle and squirm and move the joypad around trying to maneuver the Arwing. Good times, good times.

"Sega's answer to SF2 is making a comeback." It's a real shame that this game never made it past the Sega CD stage of development, it had a damn good fighting system, and remains to this day one of the most innovative fighters that Sega ever made. It was nice that you didn't have to rely on the clunky d-pad on the controller for "rolling" movements like in SF2. It's just too bad that the Saturn version of this game was cancelled due to Sega wanting to get Virtua Fighter out.

"The original SF 2 has what it takes to stay in the ranks." $70 for 8 characters, an unlockable same character mode, almost as good as the arcade. I played the shit out of this game, it was the FIRST game that I played on a SNES before I got my own. "Will a new version have what it takes to put it back on top?" I couldn't believe my eyes when I saw this one in the arcade for the first time. MKII compared to MKI was a difference of night and day. Probably the version that I played most. I would even print off moves list to take with me to the arcades and practice. Sometimes I could even sell the moves to kids that I played against. Awesome memories of this game. 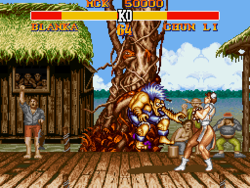 "Turbo makes a shocking appearance at #1." Man was this game so much better than the original SNES version of Street Fighter 2, some new outfits, playable boss characters, tweeks to some moves, and don't forget the cranked up speed. I never bought this one, just rented it a couple of times, and was grateful for that because how were we to know that Super Street Fighter 2 would be coming out in a year or so?

No, you're not seeing things, there are 7 fighting games on this top 10, can you believe that? I bet you could see the trend forming up there huh? Wow, Fighting games sure did rule the charts back in the mid-90s, I'm guilty of supporting this trend though.

Here's some more from the article..."What's this? Street Fighter 2 Turbo knocked the bad boy on the block (MK II) off the number one spot after only one month! Get ready for a war between these two foes. The battle is sure to heat up in the coming months."

Man I loved the writing in these magazines, the ways they would polish turds with quotes under pictures like "look at that!", classic man. It's just fun for me to go back and look at the hyped titles and the games that were never released, all the movies they hyped that turned out to be complete shit (Universal Soldier, Street Fighter The Movie, Mortal Kombat, etc...) its just too much awesome! Thanks for reading, hope you enjoyed it.
#Community
Login to vote this up!