1981 (or 7*283). The year Raiders of the Lost Ark and Indiana Jones made their appearance in the cinemas. In Poland, Solidarity elected Lech Walesa as its president (Solidarity's, not Poland's).

And Polybius was supposedly released.

There definitely were notable real videogame news as well.

The year Donkey Kong hit the arcades and Nintendo started raking in money.

Softporn Adventure, the text adventure that was a predecessor to Leisure Suit Larry was released. For better or for worse, Larry was a pretty big deal in the 1990s.

Atari was doing very well in the arcades, with the releases like Tempest, Defender and Centipede. While Centipede may have aged the worst, even it had a reimagining in 2011 by the way of Centipede: Infestation... in the US only by WayForward of all devs. I doubt it was on the same level of another reimagining of another of Atari's 1981 title (Haunted House), namely Haunted House: Cryptic Graves (2014). And Tempest is still alive and kicking, with Jeff Minter working on Tempest 4000.

Chris Crawford's Eastern Front 1941 was released. He was very close to being one of the people I featured in August as the developer of the Balance of Power games and one of the founders of CGDC (later renamed GDC).

Wizardry 1 was released. It is called the first true party-based (single-player) cRPG and the series did a lot of "firsts". Thankfully, you can read more about the series at Hardcore Gaming 101.

And last but nowhere near the least, IBM PC 5150 came to market. That alone has been covered in numerous multipart articles on various sites. IBM was a late arrival to the microcomputer business, but the architecture of IBM PC 5150 ended up becoming what so many of us use even today. In a way, the openness of the architecture, using off-the-shelf components made it easy for other manufacturers to create and sell their own PCs when IBM couldn't produce enough (or for cheap enough).

Of the games discussed in this blog, Super Cobra, Colony 7, Taito Legends, Pac-Man, Space Invaders, NIBBLES.BAS and GORILLA.BAS are the only ones I've played enough to warrant a mention.

(See a video by MrPopsicle43/World of Longplays)

Scramble (Konami, 1981) is called a breakthrough in its time. Wikipedia says (or said) it's the first horizontal shmup to have forced scrolling and distinct levels in terms of visuals, although I seem to understand the given reference differently.

But how can we know if Scramble was the first, or even have any confidence in saying anything either way? Here we get to the problem of old arcade games that were built on discrete logic circuits rather than all-purpose CPUs.

SEGA had in 1977 released an arcade game called Bomber. There are no Youtube videos on it. A quick search on the WWW produces the following stub at segaretro.org:

Bomber (ボンバー) is a discrete logic arcade game released by Sega. Released in April 1977, it was the first side-scrolling shooter video game.

And that's it. The source given there is in Japanese and I know better than to rely on Google Translate. I haven't seen any video of it on Youtube and I don't know Japanese, so looking through Niconico isn't much help for me.

So what are "discrete logic circuits"? Well, think about Nintendo's Game & Watch devices. The games don't have a CPU that would read a command from the ROM or RAM, execute it, then move to the next command. Instead of the game logic being described in CPU instructions, it's described as hardwired circuits, or so I understand from what what segaretro.org says on discrete logic arcade games. Emulating such games is not a case of just dumping the ROM and giving it to MAME. Killer List of Videogames describes Bomber as a game very much like Scramble, but... you see the problem, don't you? There's not that much reliable public information on these old games.

Well, back to Scramble then. The same year it got one sequel in the arcades, Super Cobra. I've actually played the MSX port of that game, which is a very cut-down version of it. Scramble itself appears to have been ported to Vectrex and Tomy Tutor of all gaming platforms, but that's all the official ports, excluding emulation rereleases in compilations.

The screen scrolls horizontally, the ground has different elevations and missiles, tanks and fuel tanks out in the open. The enemies vary from stage to stage, as does the terrain type: in one stage, you're flying through a cave and in another you're flying over hills. The player may not fly into the ground and to refuel, they need to bomb the fuel tanks. The latter makes no sense, but it's just a video game of that time.

That sounds like a pretty regular shmup, doesn't it? But the point is that it's definitely one of the first games to have all that.

At one point in history, Konami considered Scramble a part of the Gradius continuity. Then they didn't. But is it? Go figure.

Bosconian has made a number of appearances on various Namco Museum collections, but it is by no means a permanent inclusion.

The game itself is a 360-degree shooter. It isn't a twinstick shooter, meaning you shoot in the direction you're moving at. And in the opposite direction, because the devs were cool.

One problem for this interpretation, though, is that the game loops to the start after finishing the last stage. So what is there to win? 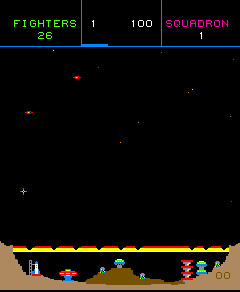 Screenshot taken from MAME. Gameplay video can be found e.g. at Zeusdaz's channel.

Colony 7 is a bit like Missile Command, except you don't have a trackball but move the aiming reticule with a control stick instead. The game gives the player three types of weapons - "regular", a large-radius explosion and a screen-clearing bomb, the latter two of which are in limited quantities. The enemies circle above a space colony protected by a shield the enemies' shots destroy, not much unlike Space Invaders. The buildings under the shield are also the player's special weapons, and if the enemies weaken the shield enough, they can destroy the weapons before the player uses them.

There's a handful of different enemy types with different behaviour patterns. The bummer, for instance, will drop a bumm on the player's cannon if they can't shoot either the bumm or the bummer down. If both cannons are destroyed or the colony is destroyed, the player loses and has to start the round again from the start. 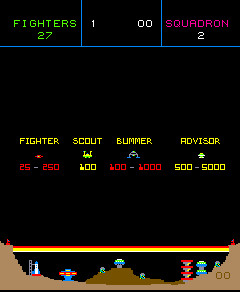 The game itself is mostly a simple game - there's not much more to it and the player has seen just about all the game has to offer in a few minutes. Admittedly, that also describes games like Pac-Man to a tee.

That is not to say the game wasn't inspired... in what some might call the wrong place. I'm going here by the game version Taito Legends on PC had -- I've seen other descriptions of the game that don't seem to match the features in mine.

The game begins innocuously enough: insert a coin, press one-player start button. But then the game says "Extended weaponry, 1 credit". Insert another coin and press one-player start, and you'll start the game with a larger blast radius in your regular cannon, at the cost of the second coin (and getting a bonus colony, say extra life, at 50K points instead of 30K).

So if you pay extra, you get a better weapon. As a result, Wikipedia calls this the first game with microtransactions. I've seen many sites say the game has multiple different weapons to purchase, but the extended blast radius is the only thing I managed to get in the emulation version I have.

Then again, the game lacks leaderboards, so I don't really know the value of spending two coins instead of one on the game.

Some of us remember NIBBLES.BAS and GORILLA.BAS (I do!), but DONKEY.BAS was the original "pack-in" game for IBM PC.

DONKEY.BAS (1981) is a game written in BASIC, included with PC-DOS 1.0 for the then-brand-new IBM PC. It's indeed as basic as anything, but by the virtue of being bundled with PC-DOS, arguably the first game for IBM PCs. In case you wonder what happened to MS-DOS, well, PC-DOS was its 'original' name.

In English parlance, PCs seem to refer to all personal computers. So, ZX Spectrum was a PC. Amstrad CPC was a PC. Atari 800XL was a PC. But IBM PC is for me the "real" PC, courtesy of me not speaking English as my first language and PC being an imported acronym. And probably for the most of you, when you speak of PCs you talk about IBM PCs and compatibles, even if IBM sold their PC production to Lenovo a good many years ago.

DONKEY.BAS definitely was... a less than stellar title. The game is a one-button game: press space to change the lane. There's a donkey standing on one land, your car is moving forwards and you must not hit the donkey. The car slowly inches towards the top of the screen, so there's always less time to react to the donkey appearing. And that's about it.

For once, I am going to direct you to read an article that appeared on Business Insider on the creation of DONKEY.BAS and how Bill Gates and Neil Konzen wrote it in a small hot closet with a lock on the door early hours in the morning.

And since we're talking about Bill Gates and Microsoft, we naturally talk about Apple and Steve Wozniak as well... because of course. What, you expected the other Steve?

Remember the discrete logic circuit arcade games from last month? Prototyping those was slow. But what if you could, say, test different colours easily? Kind of like changing a statement in a computer program?

BASIC is originally from 1964. There were multiple dialects of the language already by 1977, and not only because of the hardware-specific commands. Instead, companies like Apple and Microsoft had their own BASIC interpreters. Microsoft provided BASIC interpreters for, say, Commodore Vic-20, C64, MSX and more. But of particular interest here is Apple's Integer Basic for Apple I (and II).

I'm better off just linking you to Steve Wozniak's own account on how Integer Basic and Breakout are connected. Just to clarify, though, this took place well before 1981. In short, Wozniak first designed Breakout (1976) for Atari using chips (no, not design in the sense of what we consider game design today but the design of connections between the chips that make up the discrete logic circuits), and that game influenced Apple's BASIC interpreter so that it could be used to implement Breakout (or Little Brick Out) for their computer. If you like videos instead, here's the Gaming Historian talking about Steve Jobs at Atari, with a bit more on the creation of Breakout for Atari.

And being able to write software (and games!) with a relatively meager initial investment and far less hassle turned out to be a really big deal.

To recap 1981 in the most notable videogames, just watch RetroWareTV's The Video Game Years - 1981.

For October, I don't think I'll pick a theme; I've been feeling too down to bother. Instead, I'll just pick some random old games I've played over the years.