My name is Titannel. That's not my real name, silly. Either way, I've been a fan of yours for a while, now. I collect games for a number of retro consoles. How many? Too many. It'll be easier to list what I don't collect games for. My point is, I love this stuff. Always have, probably always will. I'll spare you the details as to why, because I have a very emotional reason for it, but that's another story for another time.

For the uninitiated, Limited Run Games produces physical versions of digital games for the Playstation 4 and PS Vita. They put up releases on Fridays at 10AM Eastern, and a second batch at 6PM Eastern. Their stock is usually limited to the bare minimum of what can be considered a print run on the PS4 or Vita, usually about 3000. As such, these games are truly limited releases, not limited to how much they can sell. And they don't reprint titles that they've sold out of. Ever.

I've actually been a fan of you guys for a while. My first few purchases of Limited Run stuff wasn't actually on the site, it was at a local video game store: 8-Bit Hall of Fame, to be exact. The owner is, of course, a huge fan of companies that give physical releases to games, as he's an old-school kind of guy who appreciates games to be real, physical objects. So, naturally, he stocks LRG stuff. 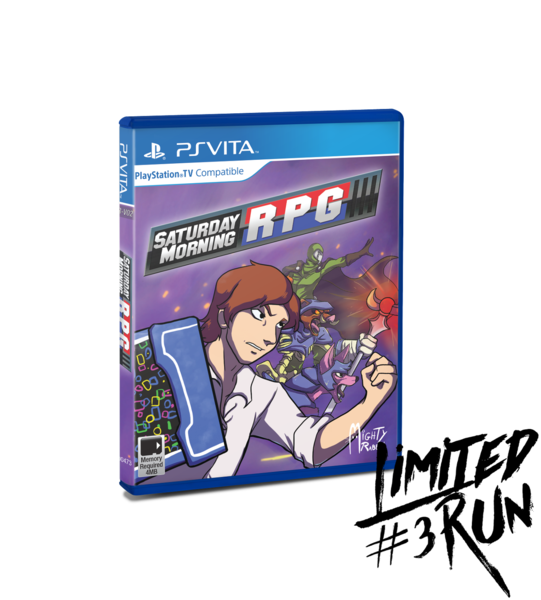 This was my first purchase. I believe it was your second release. I eventually picked up the Vita version of Futuridium from 8-Bit as well. After a while, I started buying stock from your site normally. Started with Shadow Complex. It's been a few more since. 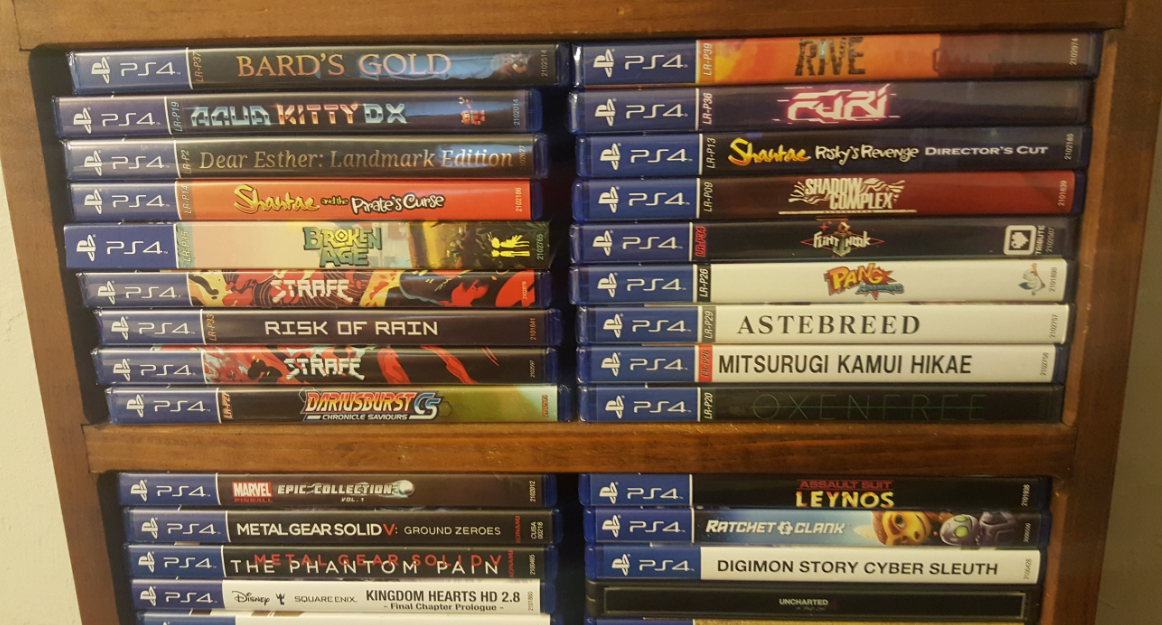 This is only a fraction. This doesn't include my Vita releases, most of which are in storage.

Needless to say, I've got a decent collection of Limited Run games. And I think they're really cool. Well worth getting into if you're a fan of physical media.

Well, if you can even order the goddamn things.

See, that's the thing with your releases. You've created so much hype around your games that they're selling too goddamn fast. Recent releases Oceanhorn and Plague Road sold out in under five minutes, and Wonder Boy: The Dragon's Trap sold out in two. 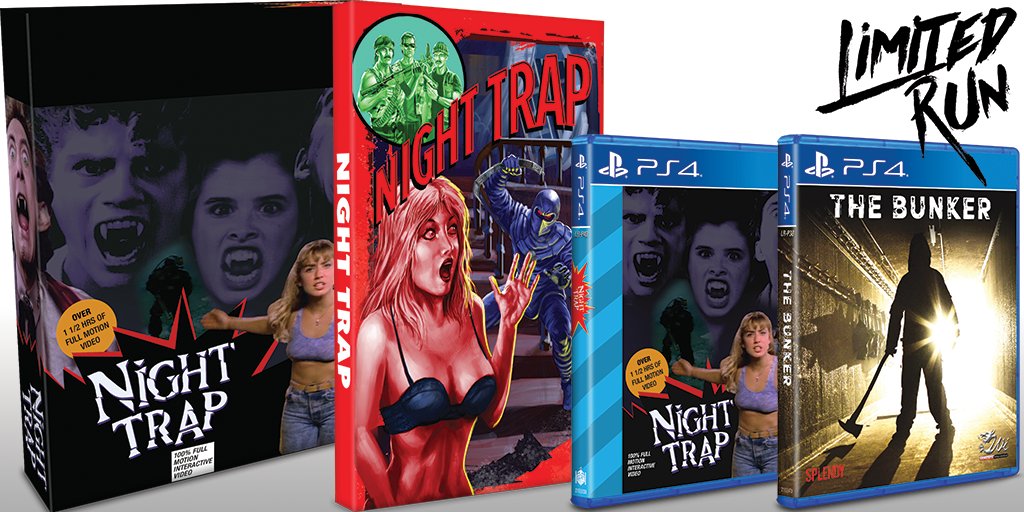 You've been hyping this for a long while, now. This is a high profile release for you guys, I know. Night Trap may not be a *good* game, per se, but it is a very influential game in the history of video games. Night Trap paved the way for more realistic depictions of violence in games. It paved the way for the ESRB. It's not a good game, but without it, we wouldn't have a lot of other good games. The industry wouldn't have been pushed forward when it was. And y'know what? A lot of people really, really wanted to buy this from you. I wanted to buy this from you. And what happened?

Well, it sold out in under 90 seconds. That's what happened. They sold out so fast that I'm sure a decent amount of people thought there was an error with the website.

Here's a personal story from me regarding this purchase. Stop me if you've heard this one before. I dilligently checked the store page for the countdown timer. When the timer hit zero at 10AM sharp, I added the games into my cart. Due to high traffic, I had to wait in a virtual line to check out, auto-logged into Paypal to save time. My phone number wasn't right, so I changed the last digit and tried to complete my purchase. I got the error of "Insufficient stock." My cart was empty. "My" copy of Night Trap was gone, sold out because I had the audacity to change a digit on my phone number, that you don't even use yet require people to have on their profile.

Update: At 6PM Eastern, I tried my luck again, scoring a normal Night Trap for the Playstation 4. So that's something, and I'll take it. I know a ton of other people weren't so lucky. But I wasn't fast enough for the Collector's Edition, even though I was on it within a second. Nothing changed, they still sold out in under two minutes. I originally posted that it was a foregone conclusion that stock would sell out that fast, and I'm sad to report that I was right. I don't like that sometimes.

As an aside, I normally can't wait for the 6PM release, because I work at a television station where being on my phone at 6PM, AKA when the live 6PM newscast starts is grounds for me to be fired. So this was a one-time thing, more or less.

Night Trap sold so fast that you may as well have never had it up to begin with. Weeks of hype, gone in less time than it takes to microwave a bag of popcorn. I've actually been pretty good with getting orders in, but it really shouldn't be like that. You shouldn't have to be there on the dot to even get a remote chance of getting a game you'd like. A lot of people would be happier if your cart system allowed people to complete their purchases without fear of the item selling out. The fact that your cart means nothing until you've recieved an order confirmation isn't unique to your store, but with something like this, it needs to happen. Make it so that items are reserved and unable to be "taken" from a cart in the middle of checkout. Somehow. Other companies do it. Why can't you? I feel like I got screwed over because I had the gall to change a single digit of a phone number. That shouldn't happen.

I'm not the only one who believes this way, either. Check the Facebook page. Or your Twitter feed. It's full of people who feel like they got shafted by your store. And, honestly, most of the talk of Limited Run Games I've seen online has been more derision than praise. People are pissed that these games sell out so fast. For a ton of people, they may as well not exist.

I know what you're thinking. "What part of 'Limited Run' don't you understand?"

A print run of 5000 isn't a large number than the standard 3000, but it's enough that more people will get to play your games and be more willing to buy in the future. I know that manufacturing games takes resources and time, but you've definitely got the funds to do it, since you wouldn't be doing this if consistently selling out of your stock didn't turn a profit. Truly, I think the current state of affairs calls for it more than ever. You can afford to make larger print runs that could still be considered limited releases. People will buy them because that's what they really want to do in the first place.

I'd very much like to see the cart system on your site reserve peoples' items, so they aren't trying to beat the clock when checking out. I was directly on time this morning, added stuff into my cart immediately and still got screwed. There has to be some way to allow people to reserve stock. If you're worried about people abusing this by adding multiple items to a cart to troll people, limit items at 1 per customer to minimize that risk. Other websites do this. You should, too. It would create a much more pleasant experience for a customer, instead of being the friggin' coin flip that it is right now.

As an aside, I'd like to see more pre-orders for big-release titles happen. I know you probably won't be doing any more after the Skullgirls situation, but I think it would help. Being able to pre-order would prevent hassle, and it could dictate print runs. Better yet, how about a subscription service? Indiebox does a lovely one doing the same sort of thing for PC releases, and you guys could make another name for yourself doing a similar deal with PS4 and Vita releases. I know i'd subscribe.

Look, I like you guys. I do. I wouldn't be writing this letter if I didn't. You guys have released some really nice games over the course of the last couple of years, and I hope that more of them continue to be released. That said, you guys have some serious issues with your business model. Most of your releases sell so quickly that they may as well not have happened in the first place.

Y'know what the worst of it is? The people who feel like you're screwing them over want to give you their money. They want to so badly, because they're not scalpers or resellers. They're fans who want to play a game on a real piece of software, instead of it just being space on a hard drive. And when they can't do it when your stock sells out in 90 seconds when it was in their shopping cart in the middle of a purchase, they, rightfully, assume that you have personally taken something from them. I know that hasn't happened, but I'm sure that the average potential LRG customer can't help but feel a little betrayed. You put so much effort into hyping your releases up (Night Trap was announced months ago!), but very little into actually making sure that people get to own a copy of the game that you've released.

I'm writing this letter as a plea, from a fan of your work, to make your games more available. To protect a customer's cart so they can get what they want. Please, guys. I'm tired of seeing people upset that they couldn't get a copy of any of your products because they had the nerve to check the site at 10:05AM.

Come on, guys. Do better. Somehow.