The Best Sequels in 'Dead' Franchises no one Brought... #1

Fans of games can be be pretty damn passionate. You only need to look at the whole MegaMan Legends 3 disaster to see how passionate fans can truly be. I'm quite sure some of those fans would sell an organ or 2 if it meant MeagMan Legends 3 would be released - hell, maybe just to have the demo released.

However, sometimes fans are given the chance to show how much they love a franchise - and miss. Like, badly. It's a weird situation and can be hard to figure out just what went wrong. Here's our first game: 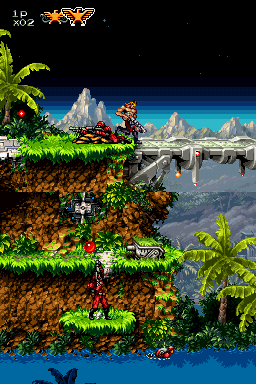 It could be argued Contra 4 is the best Contra game. I've always seen Contra, Super C and Contra 4 as the 'true' Contra games. I was never a huge fan of Contra III - it felt very different from the first 2. Sure, Contra III is excellent, but it just felt like a very good Run N Gun rather than a Contra game. Contra 4 feels like a true sequel. Yes, it borrows heavily from previous games, but injects enough new stuff into it that it doesn't hurt the game.

I mean not only does it play like Classic Contra - it also looks bloomin' gorgeous! Which should come as no surprise as it was made by WayFoward, the people behind Shantae. Sadly, Contra 4 never made it to the UK - but thankfully the DS has no region locking, so I wasn't too upset (at the time buying games from Canada often worked out cheaper than buying them here... ah, back when the £ was strong...). But even sadder is the fact that, apart from a mobile port (apparently), the game was never ported from the DS. So it's stuck on the DS forever. Which is a massive shame.

So why did no one buy it? Well, it's hard to say. I mean it got very good reviews. And had so much for fans of the series, merging the US and Japanese stories of the games into one, and included Contra and Super C for the NES as unlockables. My best bet is that it was simply on the wrong platform. Fans of Run n Guns, Shmups etc tend to like big screens - as there's lots of bullets flying everywhere and crazt stuff going on. Handhelds are also often seen as having terrible versions of classic games such as these. Metal Slug Advance was like Metal Slug with all it's limbs broken. R-Type III on the GBA had terrible hit detection. Metal Slug 7 looked utterly hideous on the DS. Not to mention that before this, the last good Contra game was release in 1992 - and as there has been a LOT of bad ones since it would be easy for people to think this was just another one of those trying to cash in on a handheld.

Basically - someone get this ported to the PSN or something. It's one of the greatest Run n Guns of all time. And a must play for anyone who enjoyed Contra back in the day.

Come on Konami, doing something good for a change...