I can remember a time not too long ago, that I would actually hook my NES up to my old tape deck and actually record songs from the games I played. I would then go to school or wherever I could go on a military base on a bike and listen over and over and over again on my Sony Walkman until the tapes started to mess up. If you were anything like me, and fondly remember playing games in the NES era than have I got a treat for you all tonight.

Coming straight outta the internets, tonight's Top 10 is one that I really had fun with. Tonight I'm listing the Top 10 non-Nintendo NES Game Soundtracks. Realizing that the list could have probably been compiled with mainly Shigeru Miyamoto games. I thought it would be good to give the third parties some love. So then, let's get started with...

Alot of you out there probably don't even remember this game, it came way under the radar back in the day. That means that this game had NO play generally. This had a decent soundtrack to go along with what was blasting your eyeballs, fairly energetic but quite memorable. I remember using this song when I was going uphill.

Metal Gear...its been a long and tumultuous relationship between us hasn't it. I remember the music that would repeat over and over again when sneaking up to the base and can even hear it now. You were a great game, but you had too many repeating BGM tracks, you made it to the list thanks to the transitions that would happen between said tracks.

A SNK RPG...yes that's right it was a SNK RPG on the NES. The gameplay was simply amazing, and the music was quite beautiful and refined for a RPG on the NES. Not saying that other RPGs didn't deserve to be on this list, but come on Dragon Warrior's music got old FAST! 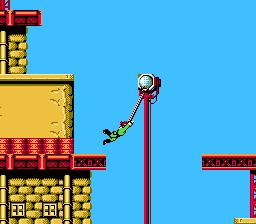 Bionic Commando had your usual marches and military themed overtures, but they were really memorable. Don't believe me? Well its been almost 12 years since I last played this one, and I can still recall many of the songs in the game but then again, I'm weird.

Ahh, I still have visions of running around feeding candies to animals to make them fall asleep. Then climbing on top of them or in their mouth...wait that's kinda disturbing. Almost sounds like a "Surprise Buttseks" concept game eh? Anyways, do yourself a favor and find some mp3's of the songs from this game, I really loved the music to this classic game. 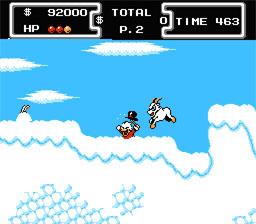 I bet many of you NES afficionados can hear the music from the moon stage right now, or how about the amazon level? That's right, the game with Scrooge McDuck makes the number 5 spot on the list, Capcom had many games that excelled on the NES at this time, as you'll come to see...

I loved the track that starts right after you hit the start button, right after it shows Jason get ready and hops into SOPHIA to start some shit. Remember when it shows the tank idling then blasing off? Hell yeah I do. Great fucking game. I loved Batman, still do, but the game was fucking amazing as a 10 year old kid. The music for the game? Even better than the gameplay. I still think that this was Sunsoft's best effort at a game especially where the music is concerned.

Not only is this my favorite platformer, and my favorite Megaman game, but it also has the best music I have ever heard in a NES game. Shit, I listen to the Minibosses rendition of this at least twice a day. Wow, is about the best word that goes with this soundtrack, each stage's music seems to fit that stage. C'mon Bubble Man's stage with the waterfalls, Air Man's stage in the clouds, god damn what a great game.

Well, that about wraps it up for another edition of A Weird Kid's Top 10. I hope some of you out there looked at this list and said "me too!" though I'm sure there are more of you that said, "fuck man, you forgot __________" or "aw man, what about _________". You know what? I might have had a few title slip from my memory, but then again, this is a list inspired from ACTUAL games in my possession. If you guys feel like I let something utterly crucial miss the list, I'd love to hear what it was, so I could go buy it. Thanks for reading, and as always, I welcome your ideas and your suggestions.
#Community
Login to vote this up!