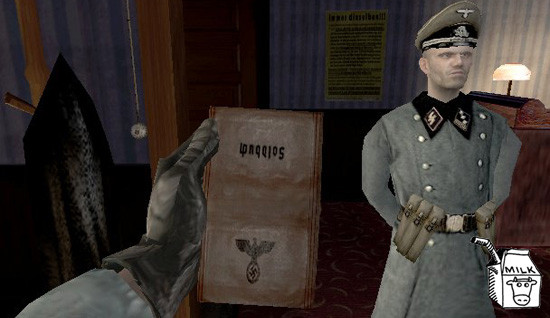 The game starts out during the world's most famous beach party, the invasion of Normandy on D-Day, like a good World War II game should. The level is decent, even if the beaches do look a little devoid of soldiers. Let's just assume that most of our boys landed just down the beach, shall we? From here, Jimmy goes U-boat hunting, sneaks through German mansions, plays Nazi dress-up, and rides through a mine in a minecart in one of the must unashamedly unrealistic sequences in video game history. One day, I'm going to walk up to a World War II veteran and ask him about the time he rode in the back of a mine cart and blew up dozens of Nazis who just so happened to be standing in front of highly explosive barrels of flammable material. When he's done ramming his cane up my bleeding arsehole, I'll be sure to blog his answer. The game ends with you single-handedly fighting through the entire population of the German military in order to kill Baron Sturmgeist and steal his magical flying unicorn of death... Okay, it's a prototype plane. The unicorn just sounded better. The ending is fairly anti-climactic, but I guess that's war for you.

Apparently, the PS2 version of this game is about as gimped as a Joystiq writer in a coolness contest (oh, snap!), shockingly lacking any form of multiplayer mode at all. The Gamecube port had multiplayer, but the Xbox version went one step further and enabled online multiplayer, so you could fight Nazis who would realistically yell racial slurs at you while you shoot at them. Of course, if you try to play the five-year-old Frontline on Xbox Live now, you will probably be met with an empty game lobby which, while less entertaining, will also save you from having to listen to xXuRgayXdickXx from Texas calling you a "nagger Jew." I didn't play on any of the multiplayer maps because I have no friends, so I'm going to completely ignore it. No one cares. The selection of weapons is pretty basic and not particularly exceptional, but they get the job done quite well during the campaign. As such, I can't imagine multiplayer being all that much fun.

I honestly don't see any point in my picking this game up again, despite its being pretty decent. It was an entertaining enough time playing through the game, and I did play a few choice levels through a second time, but the game doesn't really stay fresh, especially since there have been 78,253 sequels released since 2002. Still, it's definitely worth at least one or two play-throughs, if you find yourself tired of BioShock after your 18th run or you're sick of the COD4 beta or you won't be playing Halo 3 online, or you won't be buying any new games at all, this year. So, yeah, you'll never play this. Fine.
#Community    #First-personshooter    #MedalofHonor    #reviews
Login to vote this up!