7:18 PM on 07.31.2017 (server time)    0
These are the best of the best flying buttresses of all Dark Souls, and possibly of all time. What is a flying butress, you ask?  Have you not heard the good word? It's a simple, yet ingenious piece of engineering that allowed some of the most beautiful Gothic cathedrals to have their extravagantly tall stained-glass windows. You can think of it as a sort of half arch that supports the lateral forces down towards gravity, much like a normal arch would. Take a look at the wikipedia entry on Buttresses of the Flying Kind in order to learn the basics about them.
Buttress Basics
So let's get on with the show. These are in no particular order of greatness, but I'll mention my favorites out of these amazing support structures. These may include an array of buttresses, or one in particular. And because I love playing this game so much, I spent a good part of today taking these screenshots with save files from DkS1 on my Xbone that don't have the Lordvessle obtained, so I had to walk back from Anor Londo to take these pics.
1. The Flying Buttresses of Blighttown, DkS 1 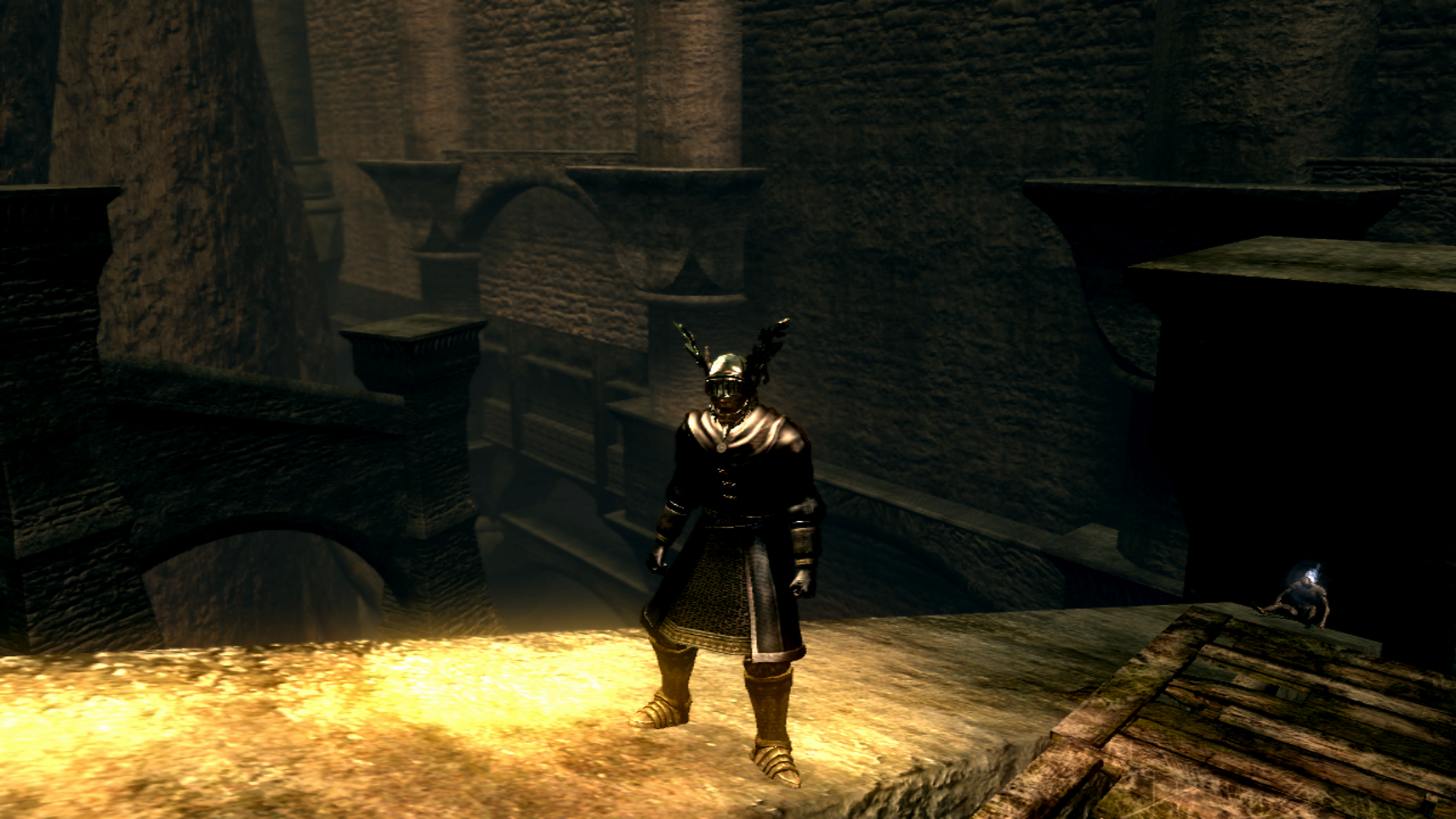 Prettiest spot in Blighttown.  Of course, rent is higher.
Not only does this one reward you with the Eagle Shield, it kinda sticks out and away from Blighttown, allowing you to look at something with better frame rate: the big gray wall.  Maybe even allow the character some reprieve from what it must smell like down there. But if you look around, there's a few other buttresses supporting the underside of Undead Burg, which is right above Blighttown; It is this reason they are my favorite array of flying buttresses in Dark Souls 1.  If you sneak back inside Blighttown, you'll see vaulted arches supporting the majority of the Undead Burg above it, with the connected flying buttresses doing what they do best, spreading those lateral forces down and away from the main columns.  I wonder how many workers died while constructing these, because these are impossibly huge buttresses; bigger than any real life examples on Earth. A lot of Dark Souls architecture is bigger than life, which is one of the major reasons I love the series so much.
2. The Flying Buttresses of Firelink Shrine, DkS 1 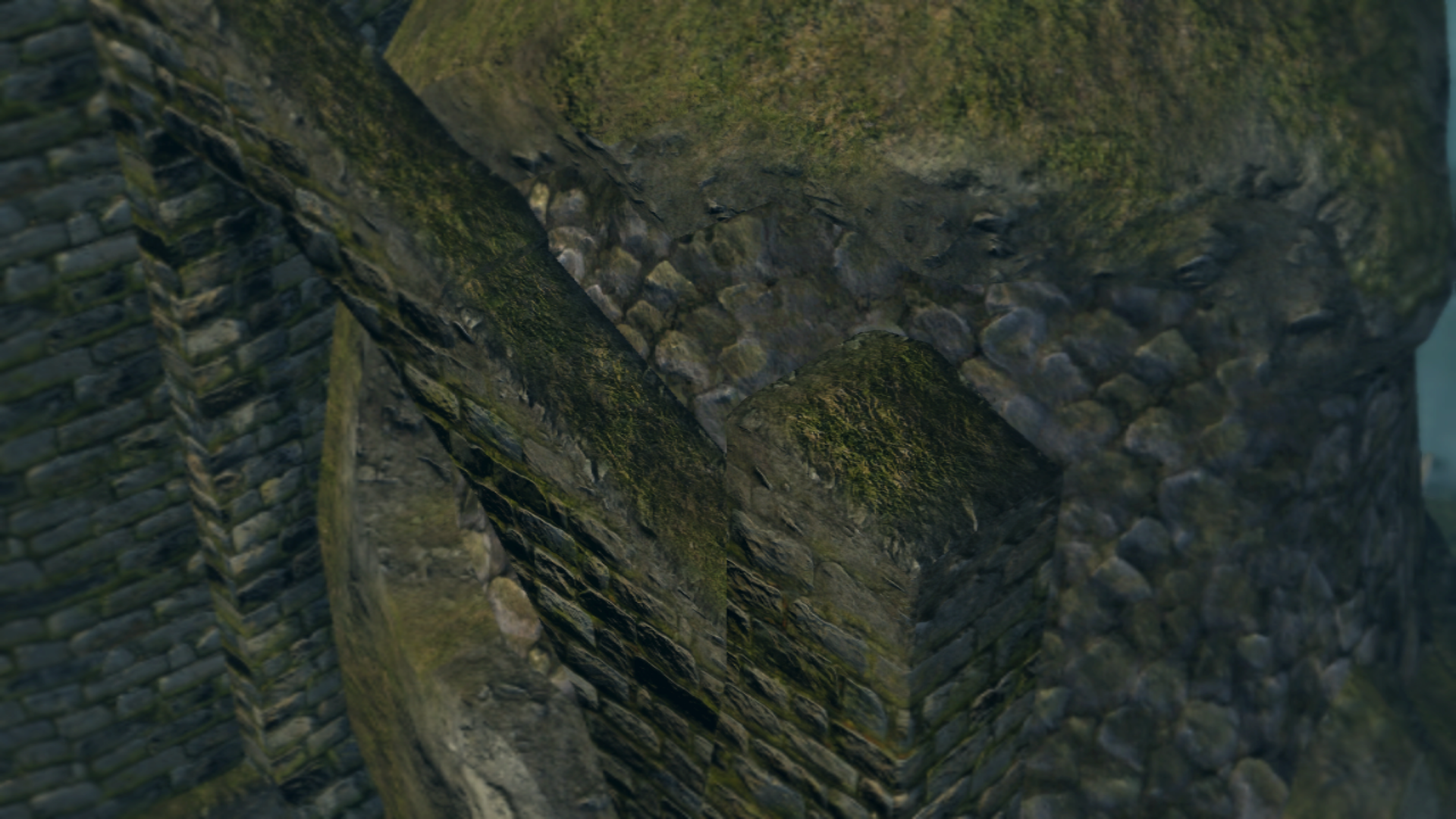 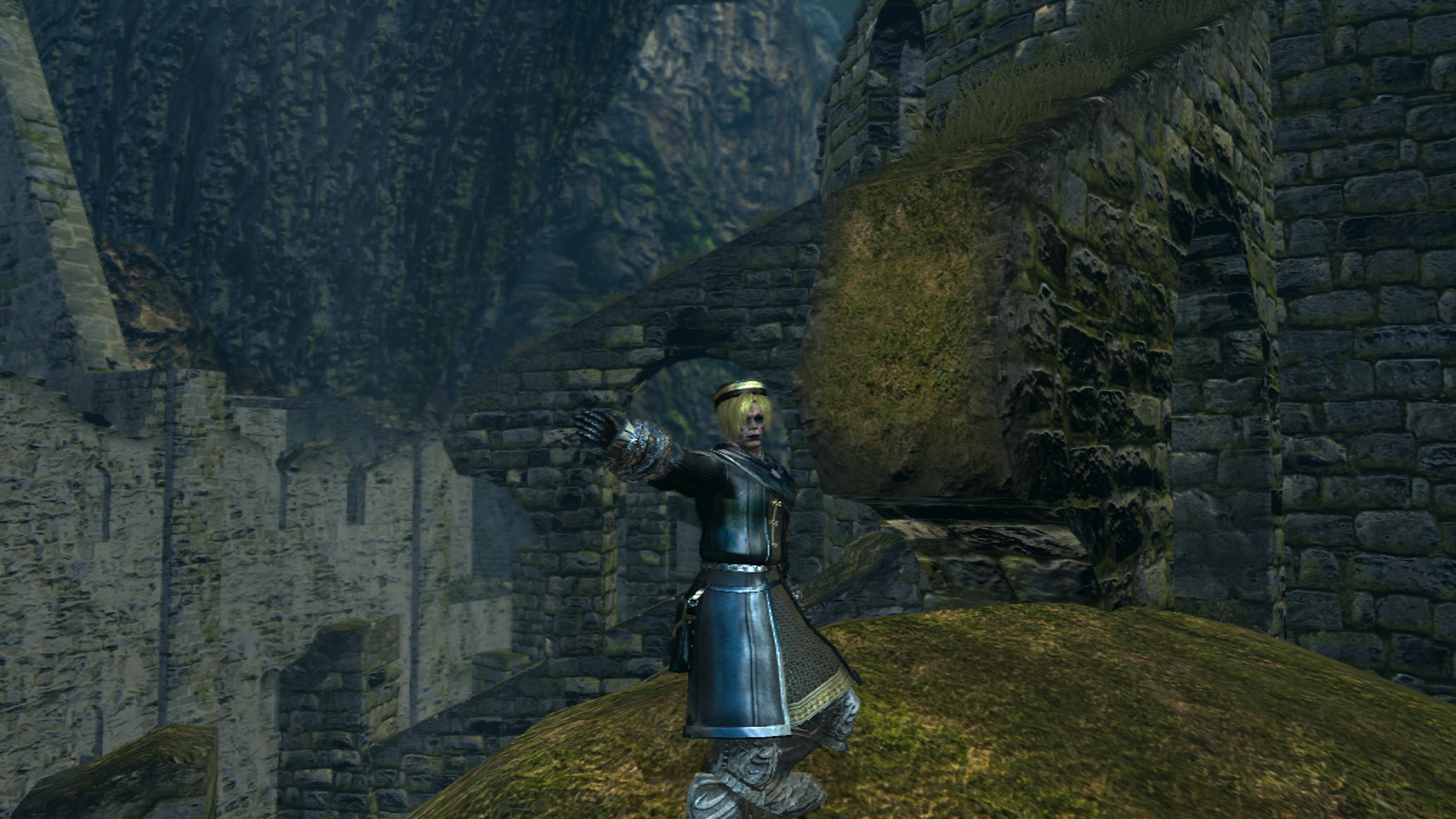 What does one call a group of flying buttresses? Supportive!
These might be the first buttresses you encounter in the game, but may not realize it as such. This includes the buttress that requires rolling onto if you want to "egg" the crow into taking you to the asylum. It's not the biggest or flashiest of buttresses, but it's so cute, all mossy, and it's got some buttress buddies around for company.  My favorite from them is the buttress on that round hill that looks like it was lazily put into the geometry (the round hill just kinda clips into the structure).
3. The Cathedral of Anor Londo and Its Many Buttresses, DkS 1 and 3 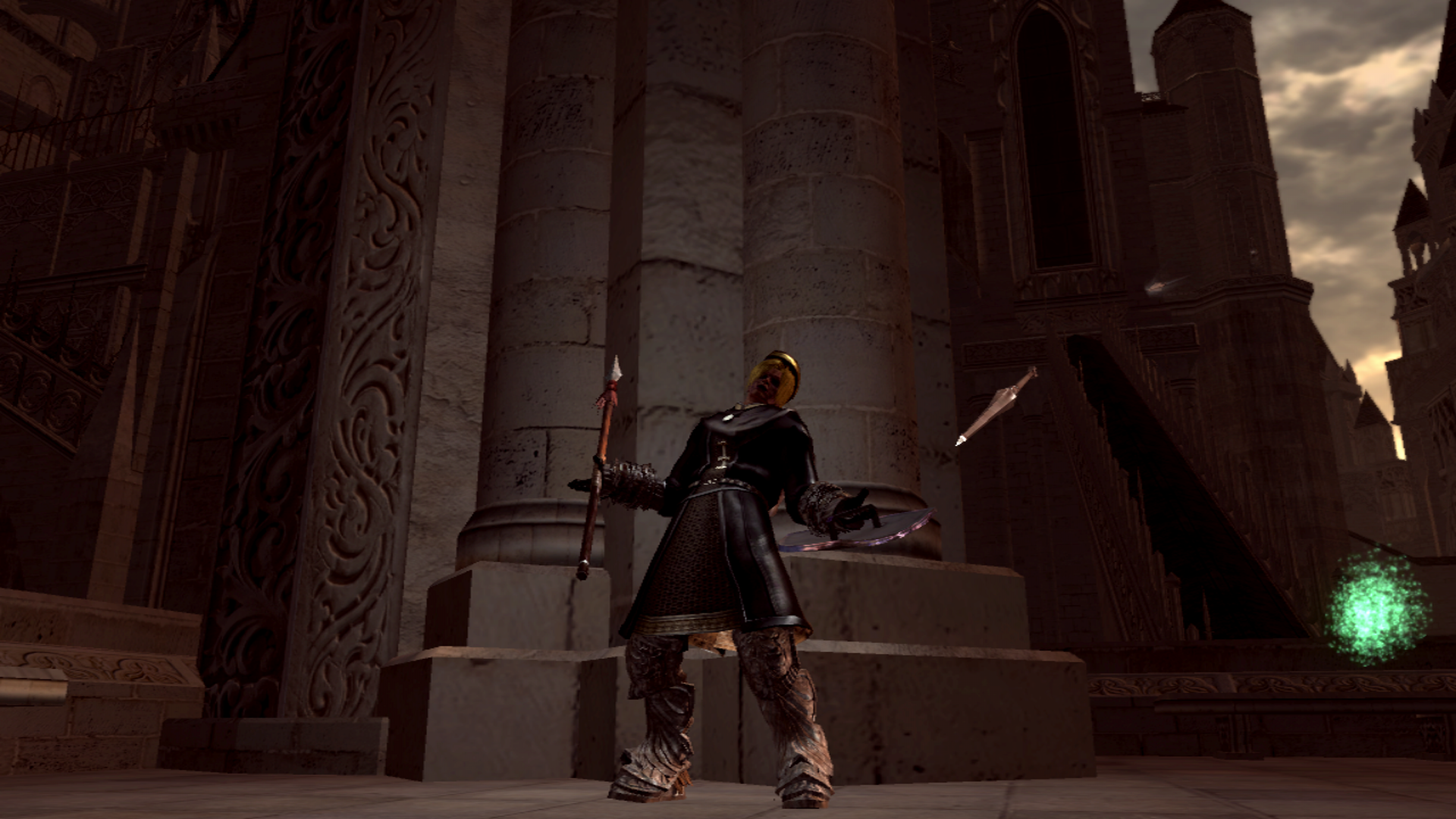 Senpai is here! Soon we can show him our new arrows!
I was unable to decide which AL Cathedral to choose regarding its buttresses  Anor Londo's Archer Alley from DkS1 is classic, but I did like the new spin on a familar face (or buttress) with the AL Cathedral in DkS3.
Some highlights from both versions include: 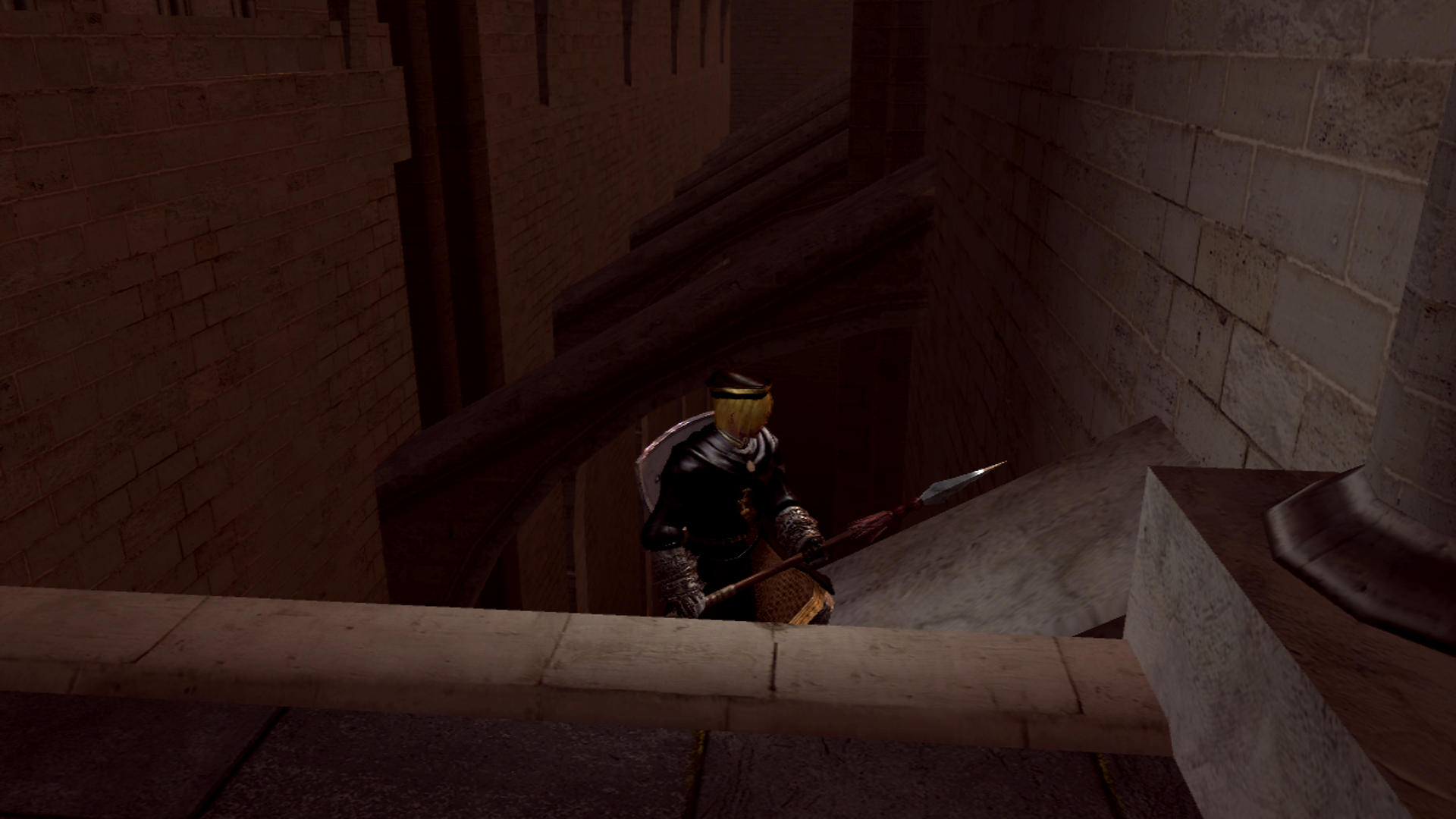 Anor Londo's Littlest Buttress.  Many a demon have fallen of this ledge.  I would also say this might be one of Dark Souls best make out spots, once the nearby demons are sorted. They installed railing here in DkS 3, and removed the buttress, which boggles the mind. 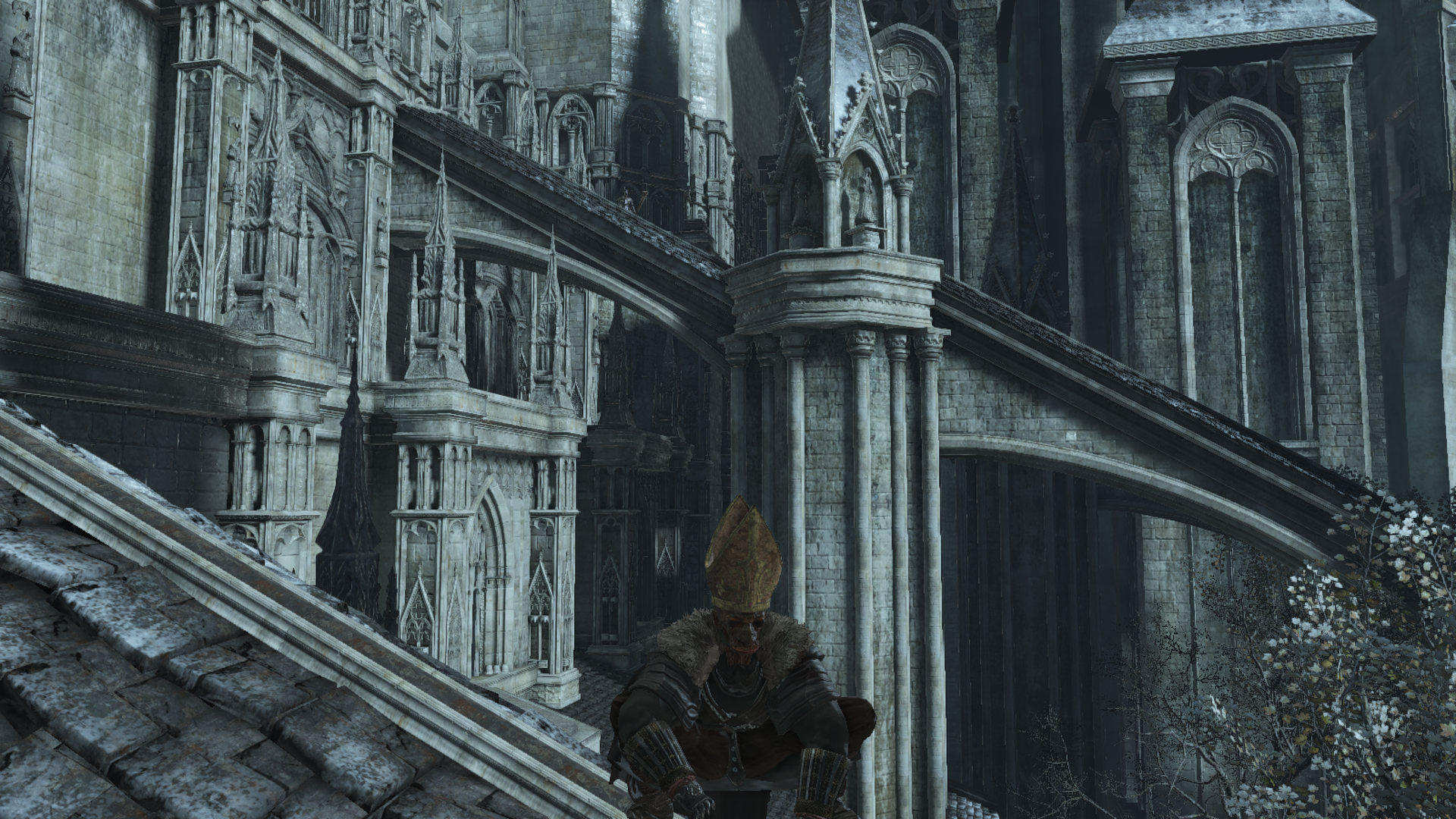 DkS3's Archer Alley wins over DkS1's due to to the overall design of the area near the buttresses.  You can walk under them, on them, around them, and you can enjoy them from many angles, thanks to the local archers' reduced aggro range.  They have exquisite detailing, the columns along the wall, the statues in the recessions, the vaulted arch reliefs; they create such a spectacle for the eye.  An improvement from the first game's Archer Alley. 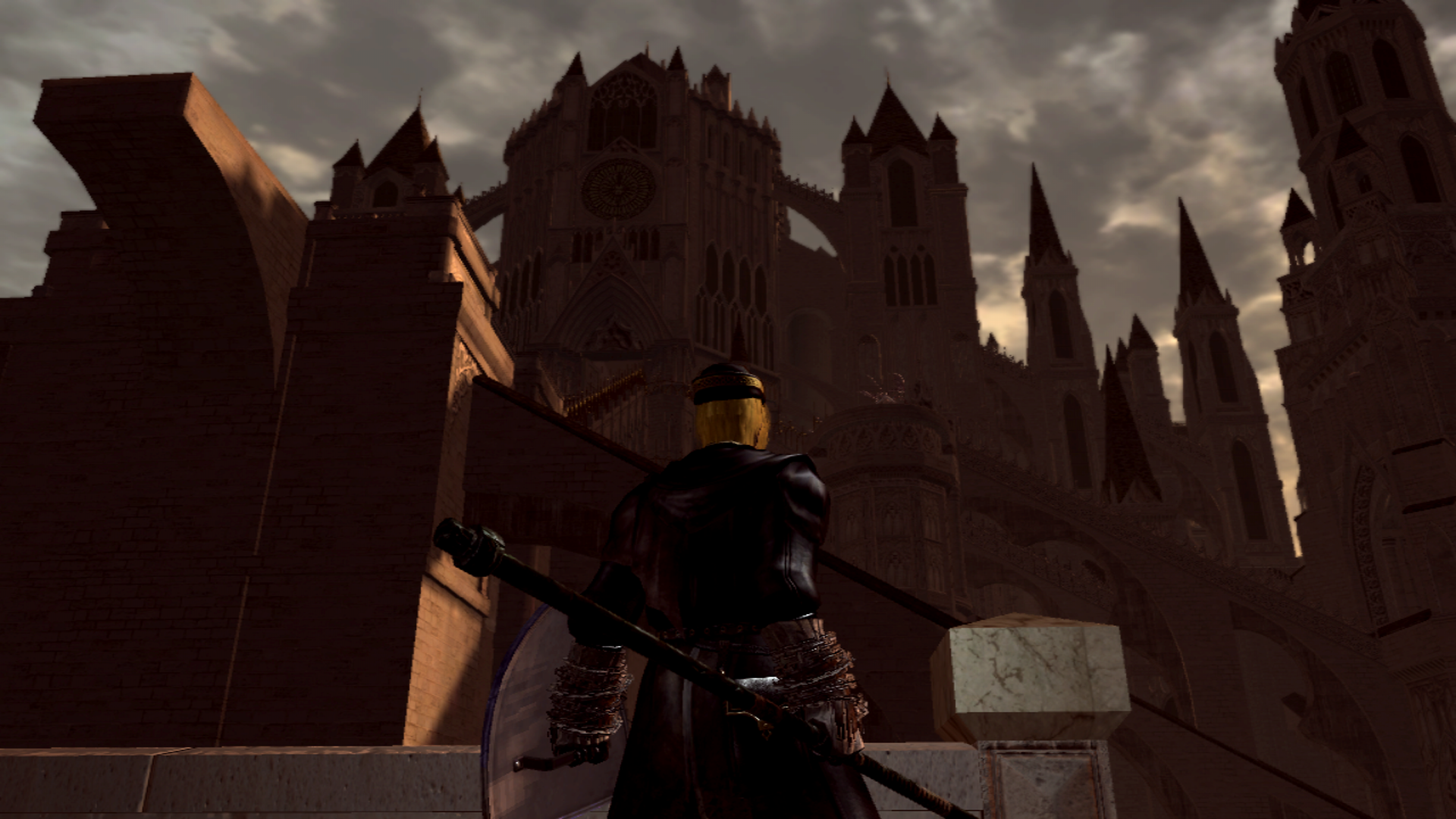 How many buttresses can you count?
Anor Londo (DkS1) should get credit for having the most flying buttresses in any game ever, (I have yet to play Bloodborne, which I imagine has a lot, and DkS2 was severely lacking in good Flying Buttresses.  What a waste!)  Just look at the picture above! And there's more if you look behind! 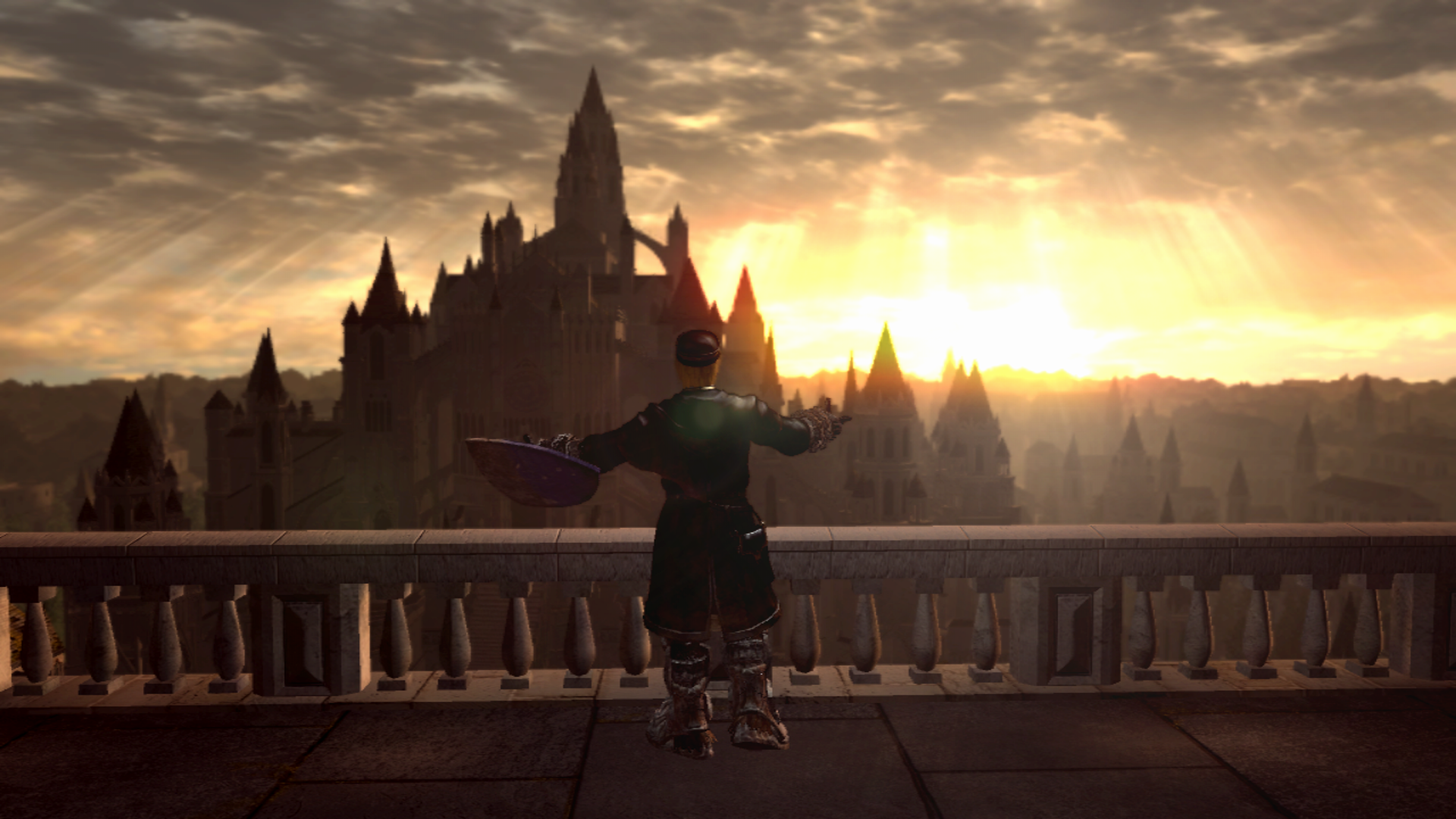 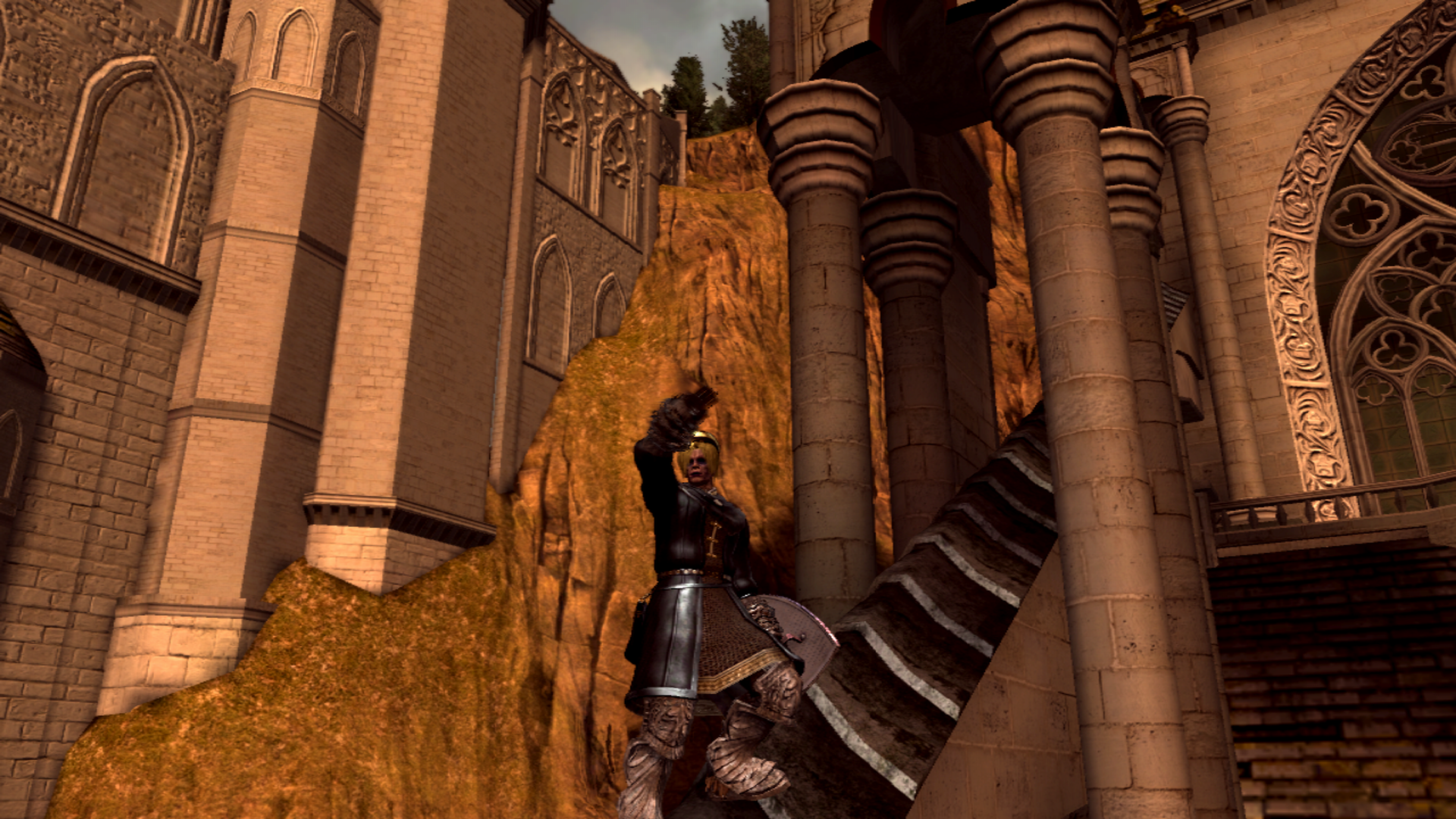 Be still, my heart.
Possibly my singular favorite flying buttress. It's design, function, and structural integrity is perfect. It's one of the most beautiful of the buttresses, with its neo-classical pillar arrays that vertically lift the structure, the ebony shingles against the ivory brickwork, and the gold trim.  The columns sport a cute doric-style capital.  Glad they went there, cointhian capitals would have been to gaudy. It's the hottest of buttresses.  Not only do you get to walk on it but... through it. And it's nessacary to traverse if you want to beat the game, speedrunners can't skip it over!
5. The Flying Buttress Playground of the Cathedral of the Deep, DkS 3 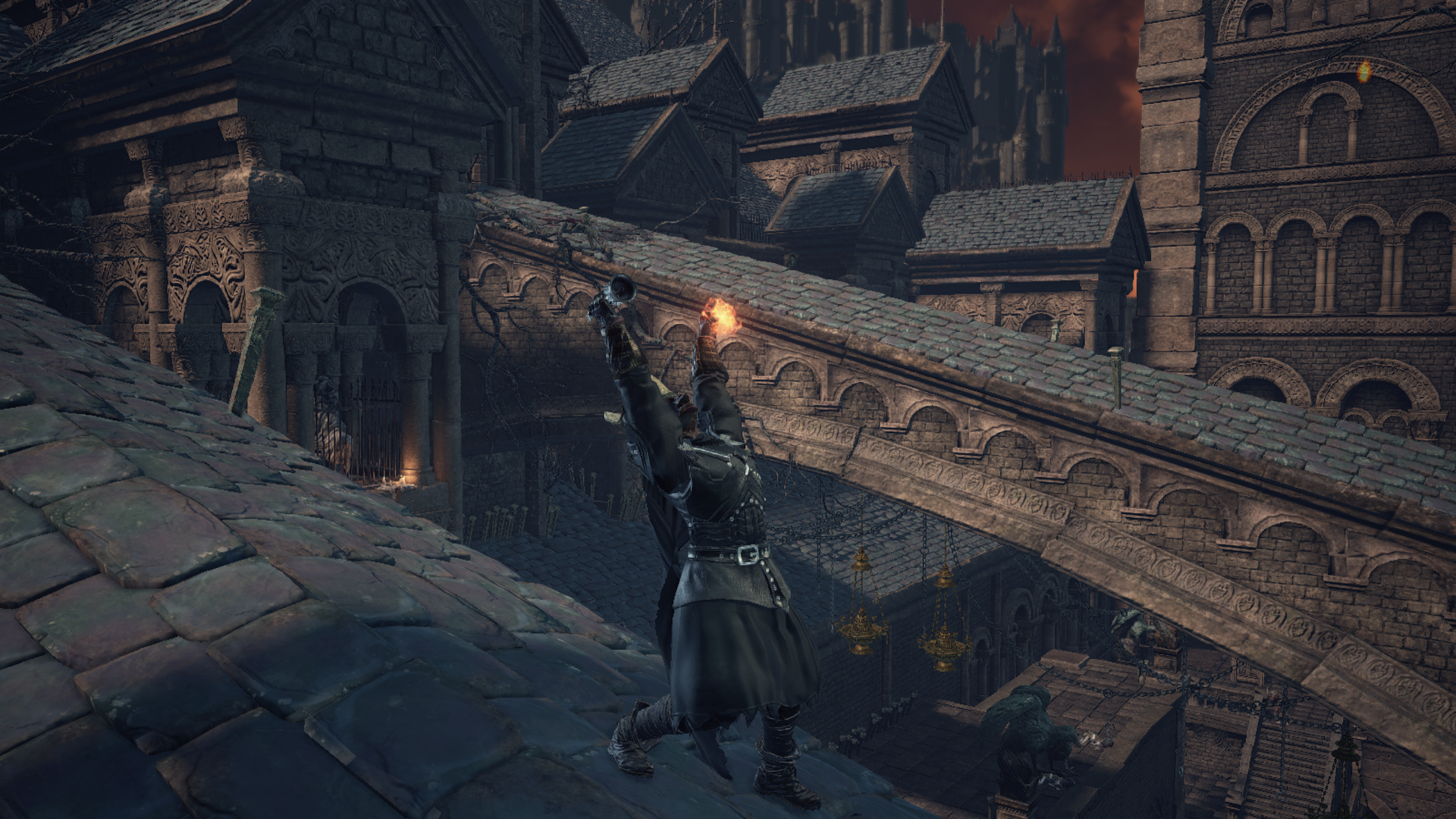 Man I wanna lay my hands upon yo fuckin' sexy buttress and squeeze! and Squee-HEE-HEE- hee-eeze!
This is my favorite area from DkS 3.  I think we all know why, by now: Flying Buttresses. CotD's rooftop section is some of Dark Souls finest buttress arrays. Giant undead dudes, fire-enhanced enemies, those sneaky hooded ambushers haunt them, and lots of vertical and interior layers to poke and prod through.  I loved it's tiered roofs, with different levels of buttresses to clamber upon, possibly hump.  The buttresses themselves feature some cool details too, like the votive candle shrines, chains and lamps hanging from the buttresses, and the arrow heads impaled from the Giant Archer in Undead Settlement ( I think thats what those are).  Truly a fun, vertical area to play in, I wish I had a chance to do some PvP in that region, it would be fun to ambush invaders from the higher tiers of buttresses.
Here are some runner-ups.  They are beautiful, grand flying buttresses, lacking only in playability: you can't really do much except walk around or under them.  They reside in the top tiers of the Grand Archive. 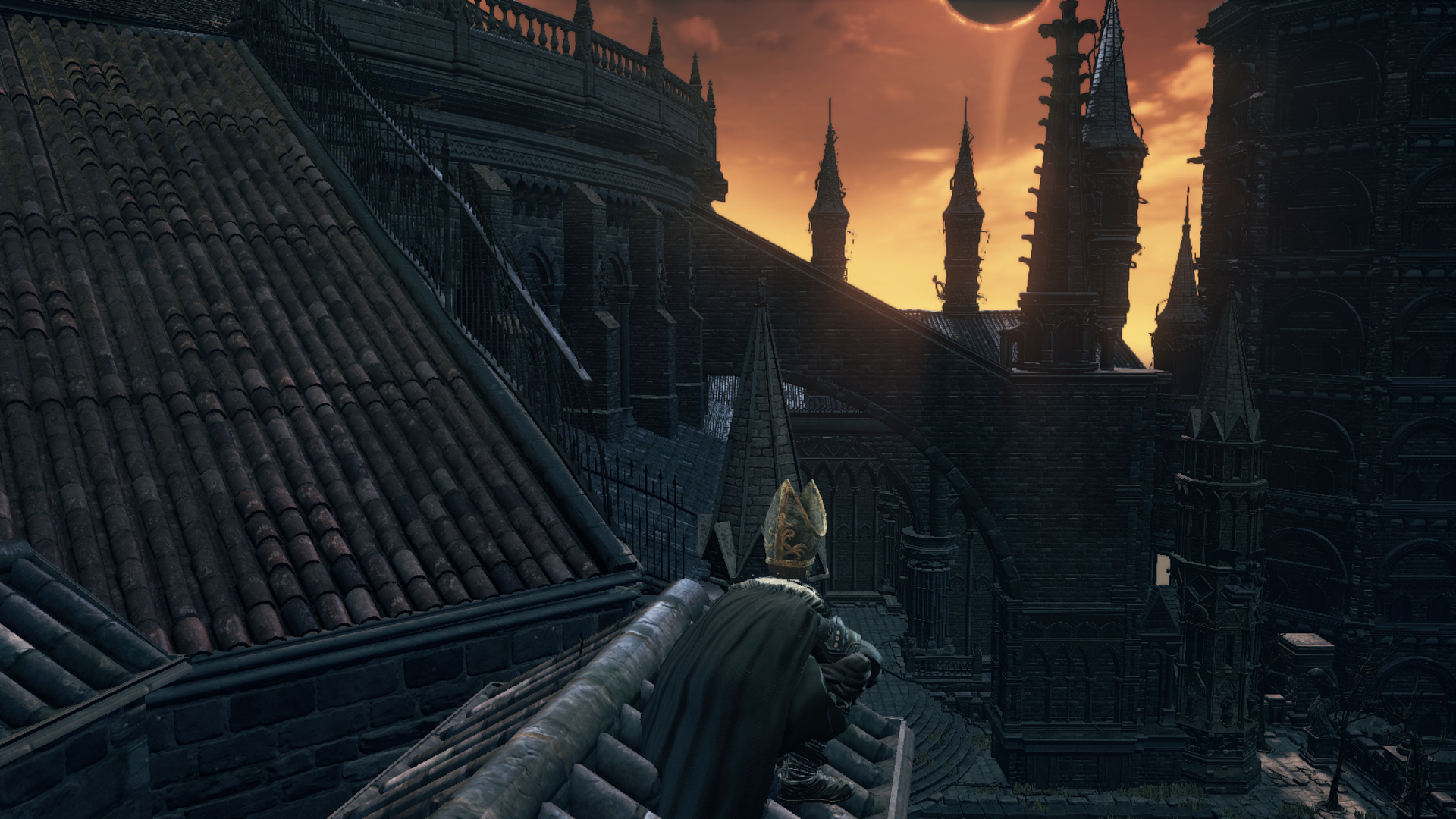 I can't stand how that little tower next to it has a different quality of texture, maybe it was added after the fact.  Dump that tower, girl! 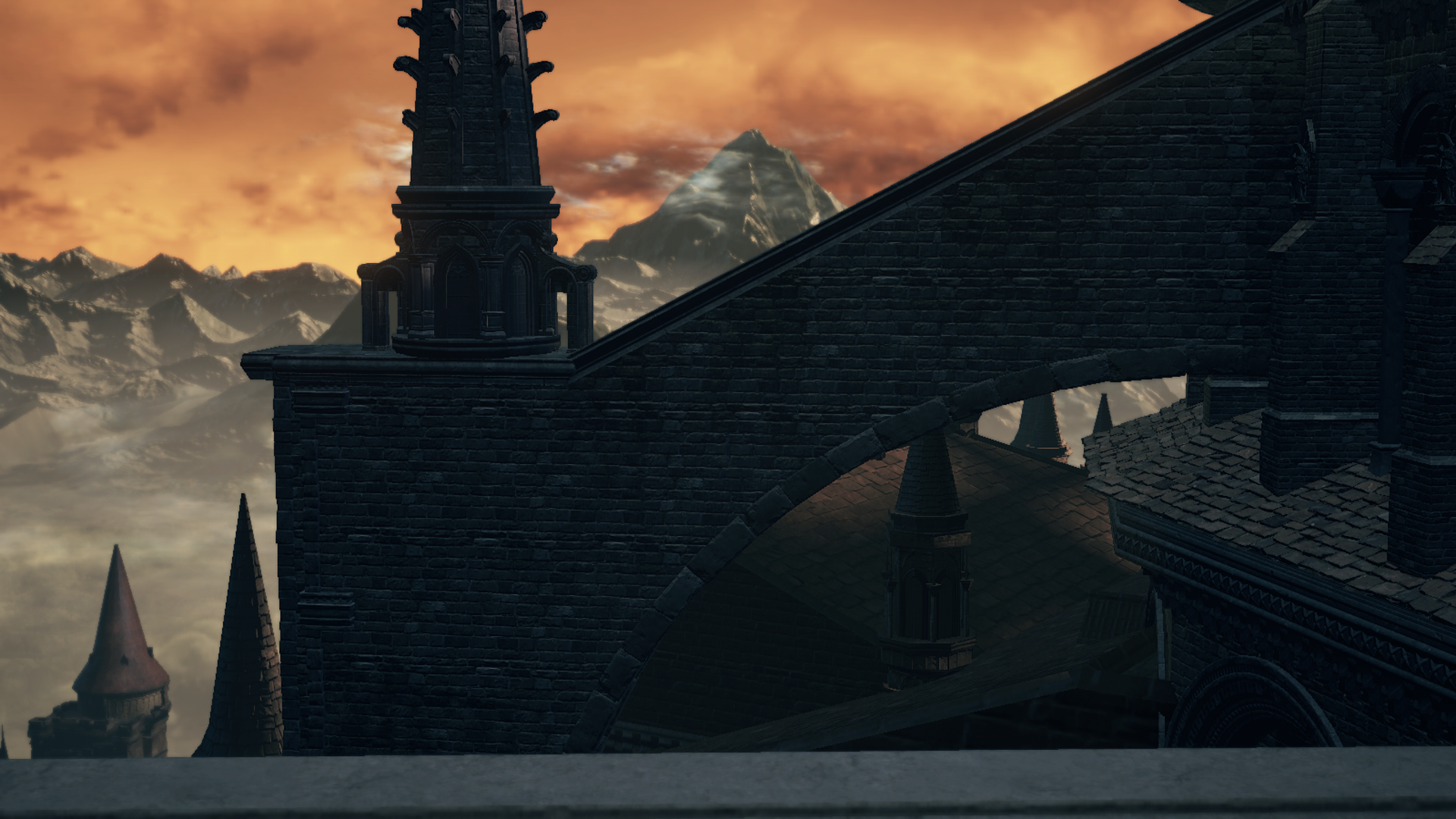 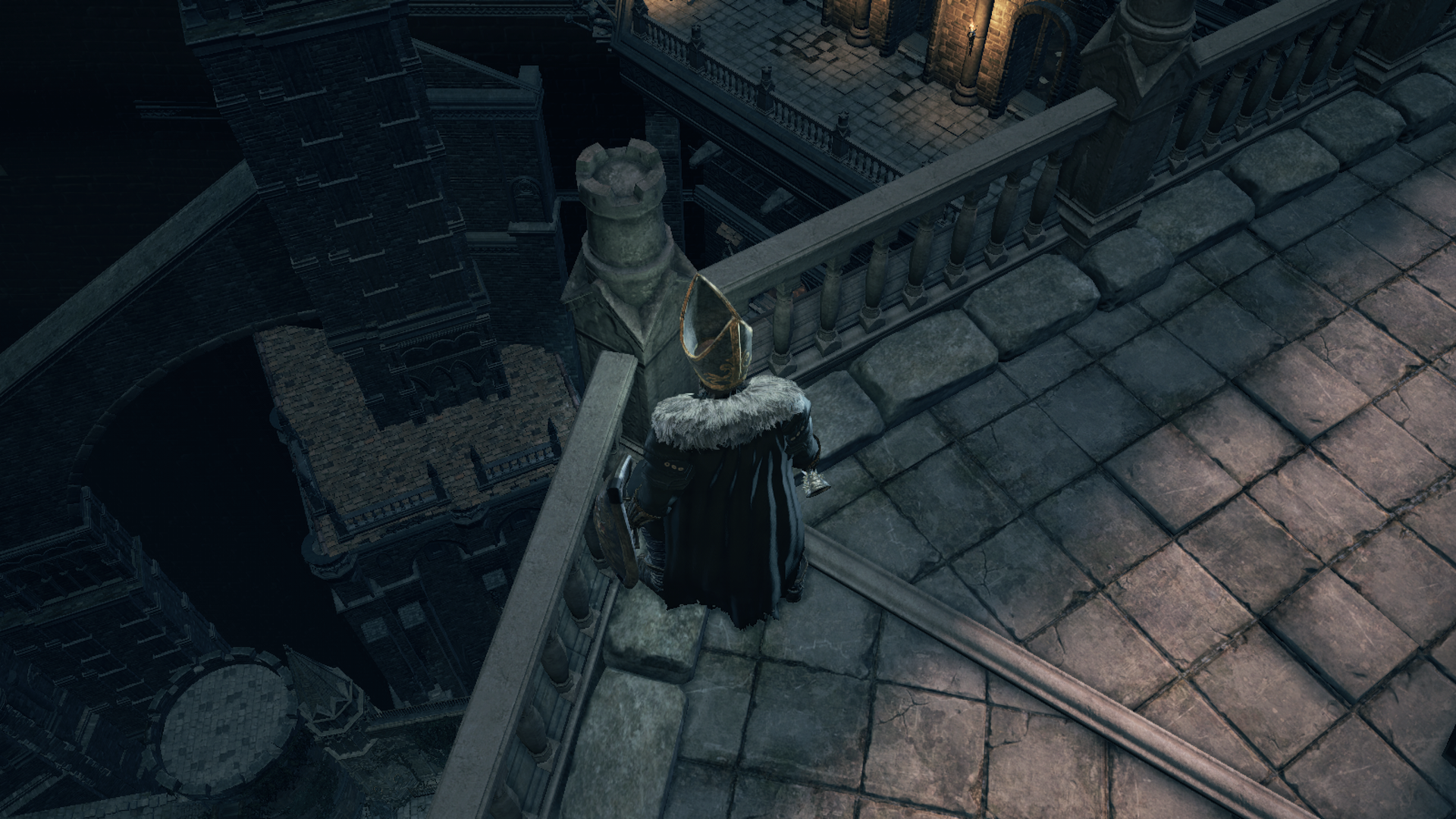 This is a two tiered buttress, split in 2 photos.  Double Buttress action you can't get on cable TV.
And they're you have it, a retrospective of Dark Souls finest flying buttresses, I hope y'all learned something new, about me, about yourselves and about the world.  Ever since Dark Souls, I prowl my neighborhoods, scoping out all the churches for dem FB's.  Of course, in Queens, NY, there's not any.  Manhattan has some, I know, but they can't be checked out due to the dense urban grid the island consists of.  My goal for this blog was to hopefully educate you about flying buttresses in real life, so you can be prepared to see them in their full glory.

- I had something else here, but this'll do. This'll do great.

My favorite games meld music, art, and gameplay to enhance one another, elevating the product to something beyond mere "consumption"; it's an experience. Not everyone will like them, but they do gain a passionate following. Sorry if anything I said sounded pretentious, I am trying to be sincere. I love music and art, I've dabble in both for over 20 years now, so I appreciate games that put love into their art assets, animations, character design, level design, music, sound design, storytelling, and voice acting, even if the gameplay is simplistic (as long as it's fun!). These games also tend to feel nice- the control has a certain snap to it, enhanced by the visual and audio cues. This list may be biased towards my adolescence and childhood favorites from the SNES and N64/PSX days, so bare with me: you will see a lot of retro favorites. If your favorite is not on the list, it's probably because i didn't play it as a child/adolescent, or as an adult, for that matter.