A look at Levels+ on Switch

Levels+ is a mobile port for Nintendo Switch. You can get the original Levels as an ad-funded free-to-play title with in-app purchases at least on Google Play. There, I said it.

So what is Levels and what's the difference between the 'free' Levels and paid Levels+ on Switch? Well, Levels - Addictive Puzzle Game if we write the whole name.

The premise is clearly related by Threes and 2048, except you move one panel at a time. The playing field is a 5-by-5 panel area filled with yellow, red and blue panels of varying levels. 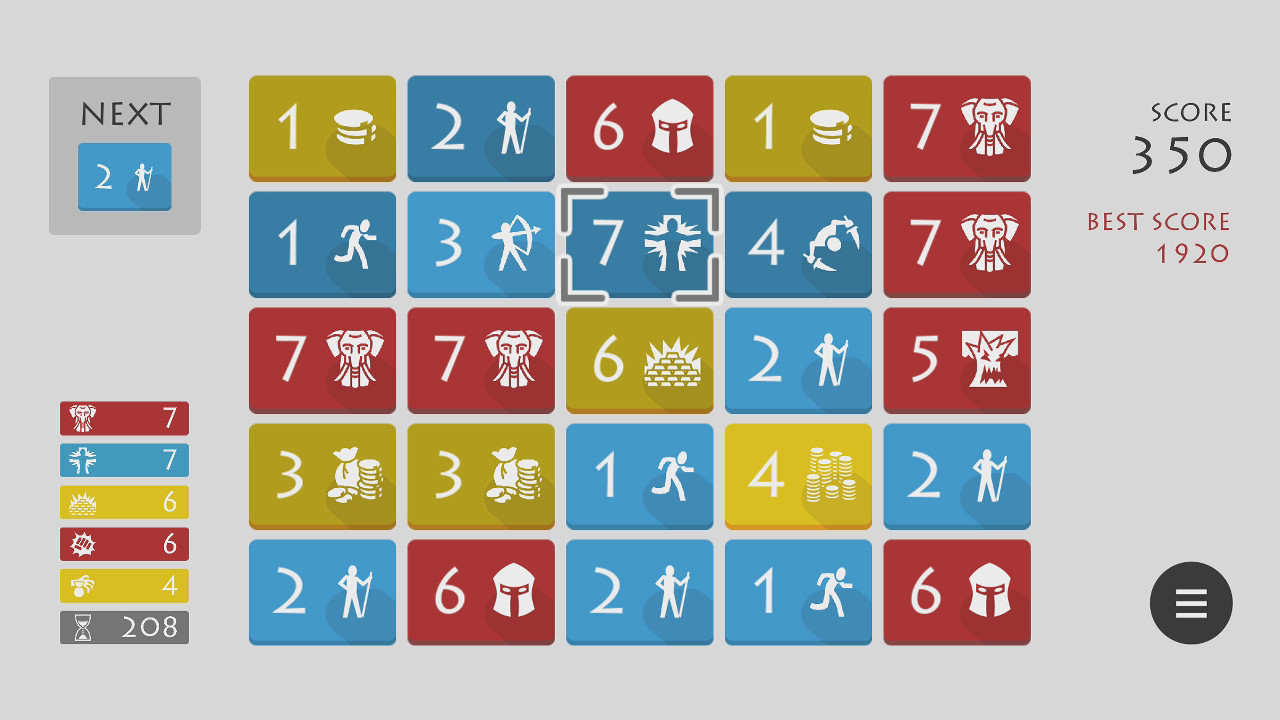 To raise a panel's level up by one, you slide a panel over another of the same colour and level. The space left is filled by the adjacent panel and a new panel is placed at the end of the row or column.

The second key difference to 2048 is in the three colours. Yellow panels are treasures, blue panels are allies and red panels are enemies. You cannot merge the red panels, unlike the blue and yellow ones. Blue panels can be moved over red and yellow panels of same rank or lower, and only covering the yellow panels with blue ones adds to your score. Defeating enemies has no effect beyond cleaning the map. Simple rules and a logical explanation for the panels.

And all you do is move yellow and blue panels by these rules until you run out of valid moves.

The game feels harder than Shephy's basic mode, which became easy once you learned the winning strategy for most hands you start with, or I have yet to find that strategy for Levels. It looks like Levels has ten levels of panels, but with five or six hours of playing, I've managed to get my ally panels only up to level 8.

Very simple rules, very simple gameplay. There's an element of risk and reward, too. The higher the rank of the treasure you collect, the more points you get, but you also need to get that one high-ranked ally you have to collect that treasure.

I fear, however, that once the player manages to reach level 10 panels, there's no more reason to keep playing unless you're a completionist. There are 26 in-game achievements and the enemy cards occasionally are rare variants, which, when defeated, are added to a collection view. The game also has 26 in-game achievements. But really, these feel like half-hearted attempts at best.

On the aural side, the music gains extra layers as you level up panels, not much unlike in de Blob. So far I've heard two music pieces, the second one starting after advancing far enough in a game. Other than unremarkable sound effects, that's all there appears to be.

As you might expect from a free-to-play converted to paid software, the Switch version:

Very minor differences. An actual gameplay difference beside the next block being shown is that in Levels+ you can move a yellow panel underneath a blue panel, adding extra room for planning ahead.

The game can be played with a controller, but can also be played on the touchscreen like the mobile version. Both work perfectly fine.

So what's my final verdict?

(I bought the copy of the game with my own money. I also really need to stop writing and releasing cblogs the same day I write them. EDIT 1: Added game's complete name (Levels - Addictive Puzzle Game) to the top.)