My pick for today's unknown game definitely wasn't unknown, with Eurogamer having run a story on it just recently. Instead, here's a quick and hastily written look at one old game that can be found on Steam and seems quite unknown. And it's suitably retro for my liking.

Thrust. Solar Jetman. PixelJunk Shooter. Gravitar. Oids. If you recognize any of those names, you'll have a good idea of what Gravitron 2 (Dark Castle Software, 2008) is like when I say it’s like a neon-coloured Gravitar. 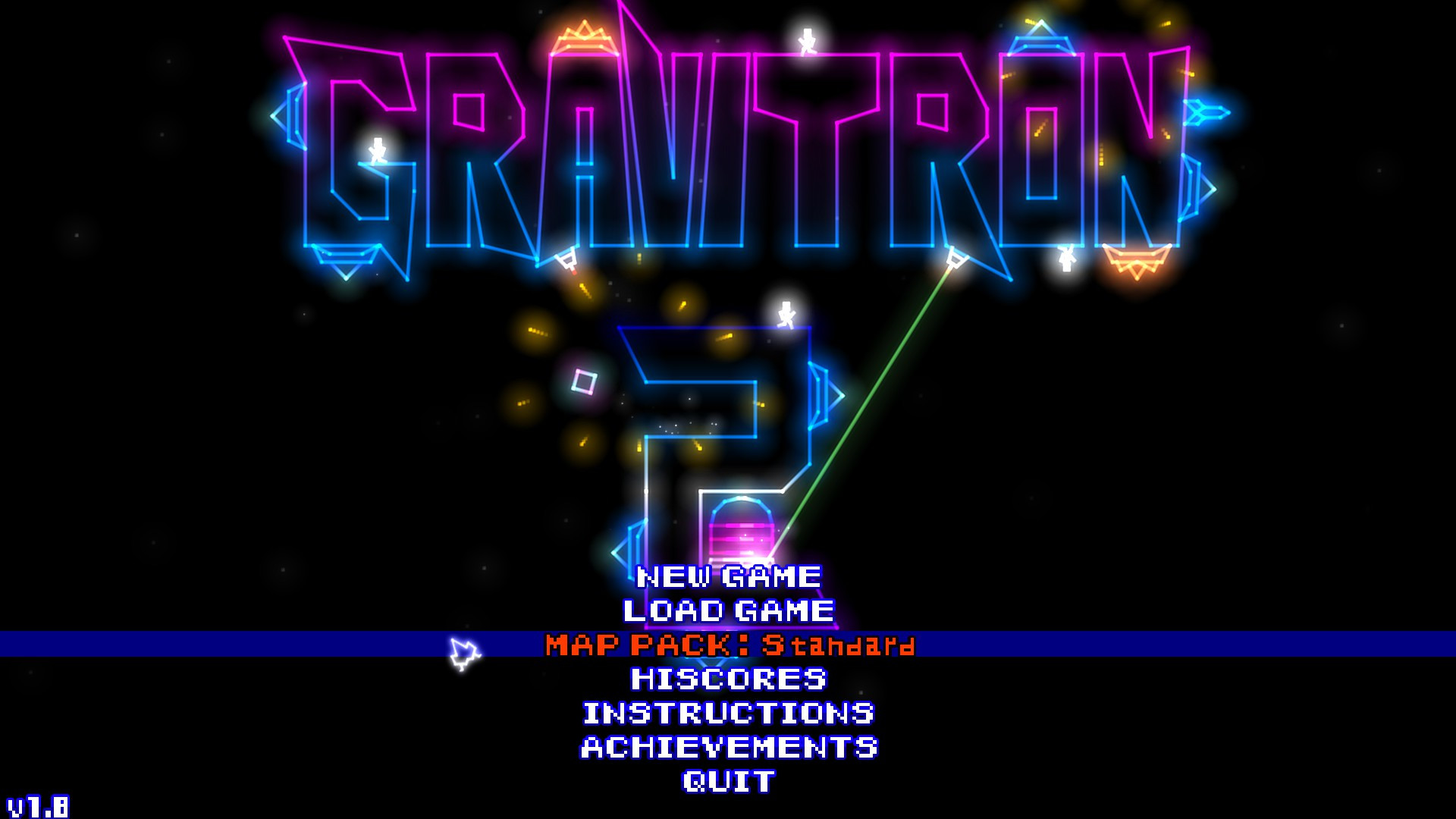 Please do pay attention to the chosen map pack? Please?

The gameplay in Gravitron 2 is simple: you start each stage above a planet and you need to fly down and destroy all reactors the planet has before making a quick escape. The controls are very much like in Asteroids: turn left or right, boost straight forwards. The key difference is you have a shield instead of a teleporter and your ship has to deal with the gravity as well, since crashing into the ground damages the ship.

Maybe it is. But it’s also very difficult. Not every level even has in-level checkpoints and while there are infinite continues, losing all lives means returning to the start of the level. The game is even harder if you don’t read a helpful review (like this or the one I read on Steam) that tells you the first stage the game offers you is the first level of an expansion pack ("OfficialPack1"), definitely not the level set newcomers should start with.

That also belongs in the group of most regretful UI decisions: I gave up on this game at first and got back to it only years after buying it when I read a customer review on it.

Compared to most titles in the same genre, though, Gravitron 2’s feature list is rather sparse and it doesn't do much new outside the neon-coloured graphics. The player has to play the stages in a fixed order, unlike in Gravitar. The levels are short, unlike at least in Solar Jetman, but given the overall difficulty, that's appropriate. There’s no heavy items to drag around like in Thrust or Solar Jetman either. There are, though, scientists to rescue to repair your ship, if you so want to. Plot? No plot. Online leaderboards have also died over the years.

So what does the game have then? 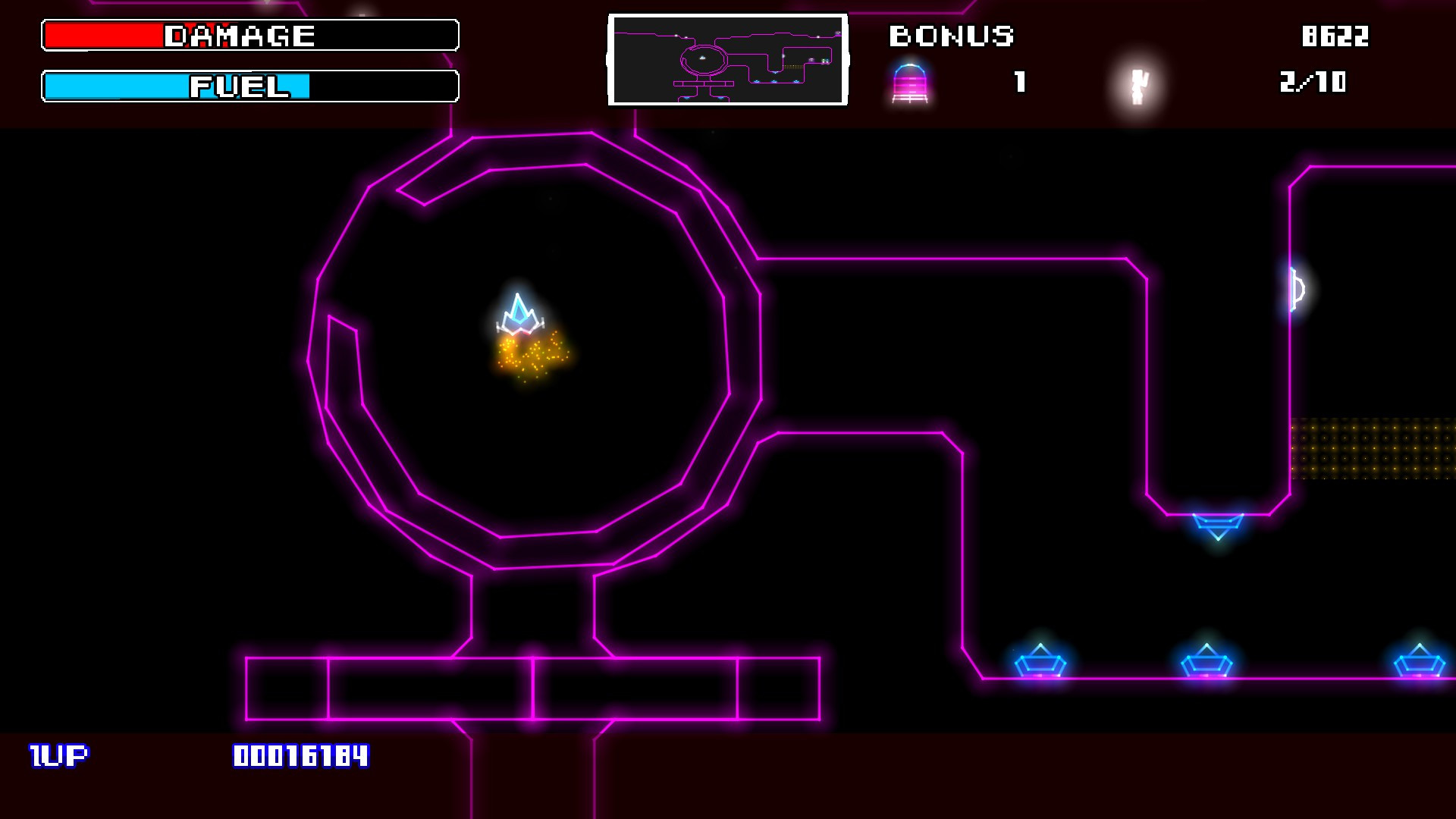 A screenshot of level 17, apparently close to the midpoint of the game; IGN's review said it has 40 levels.

But it’s also one of the few “recent” single-player successors to Gravitar and Thrust that I’m aware of. Gravitar itself can be bought as a part of Atari Vault, Rare Replay has Solar Jetman and then there’s PixelJunk Shooter 1 and 2. There's also Retrobooster (2014) that I haven't looked into yet, but that’s it.

I've played the game for over two hours now and I've got to level 21, out of 40 if we go by the number IGN gave in their review. I think their review is also good at describing my overall feelings for the game and I don't expect the last half of the game to have major upsets in how the game plays. It's got issues, but for its price of $5€ it's OK for a casual fan of the genre who doesn't mind a stiff challenge.