Embracing my true self, I've succumbed to gay Persona 5 fanart 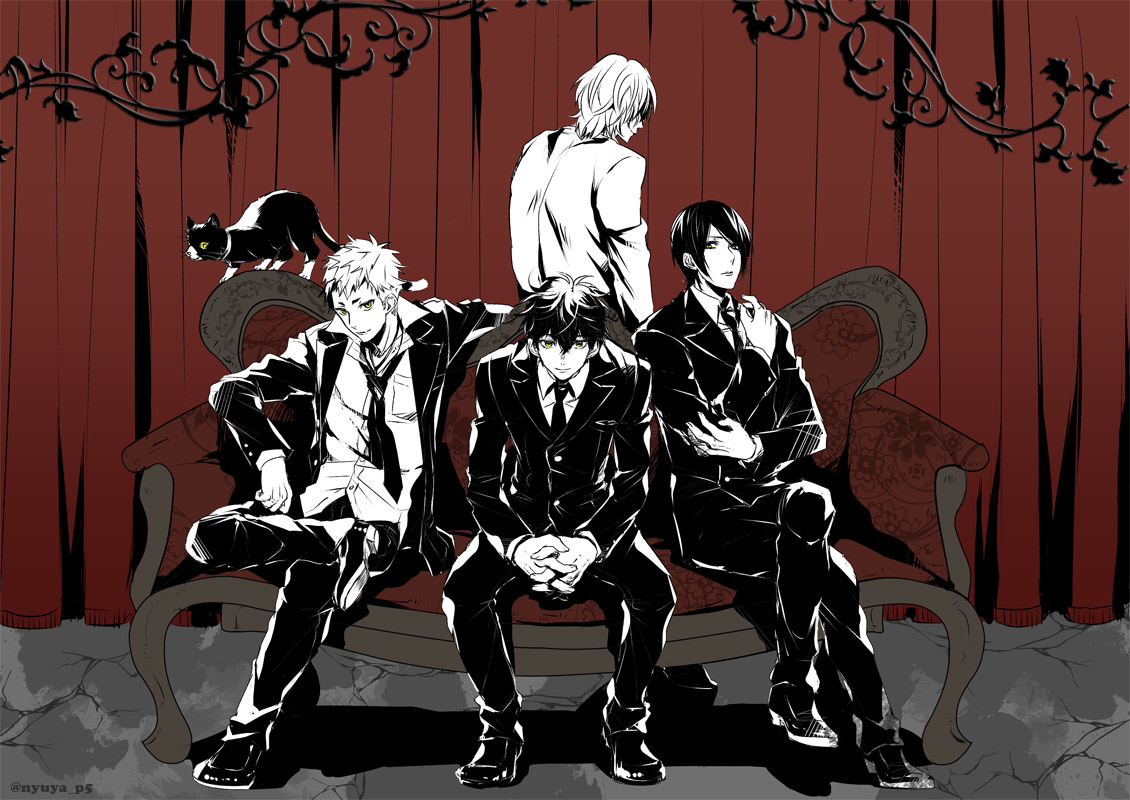 I think it's about time we reach out to the truth in regards to Persona 5's mean crime squad. The truth in that they are young, hip, rebellious funk lords who need crime and, occasionally, a little bit of loving. Too much of one can be toxic, which is why Persona 5 must ever so carefully attempt to balance the two extremes. But, then again, I often find myself indulgent. Why bother fighting it? It's no fun if you can't be true to yourself! So, we're going to take a bit of risk and go full on with the loving today as we avert our gaze from our own realm and onto the outer reality of... 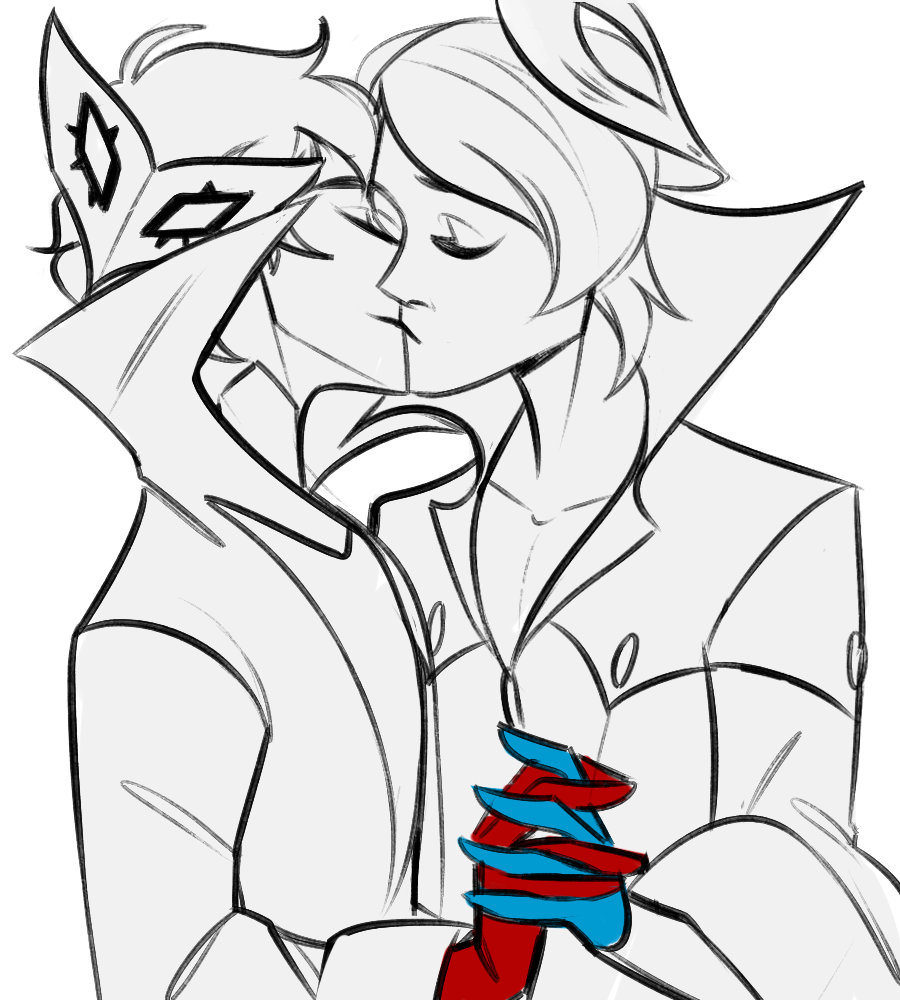 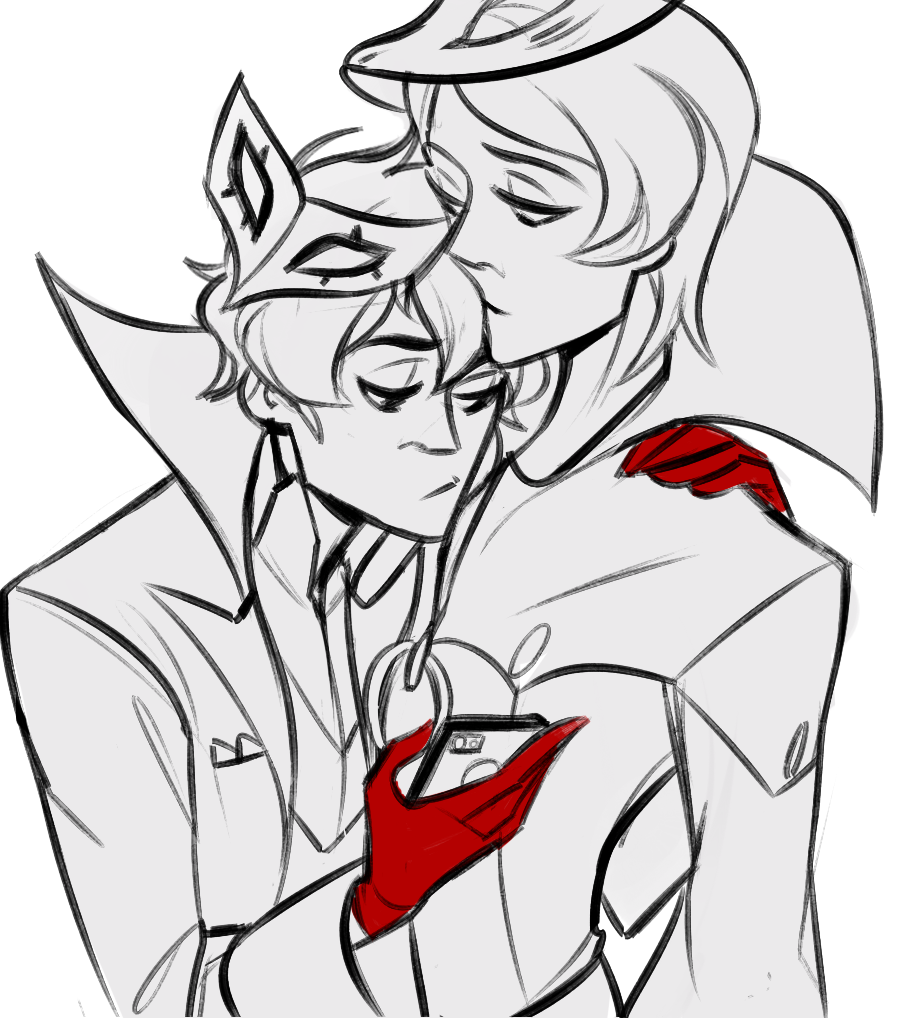 That kind of fanart.

[NOTE: Apologies on the off-chance that anyone here is perturbed by the lack of direct sources. Most of the images were picked up via these three SMT/Persona fan pages: 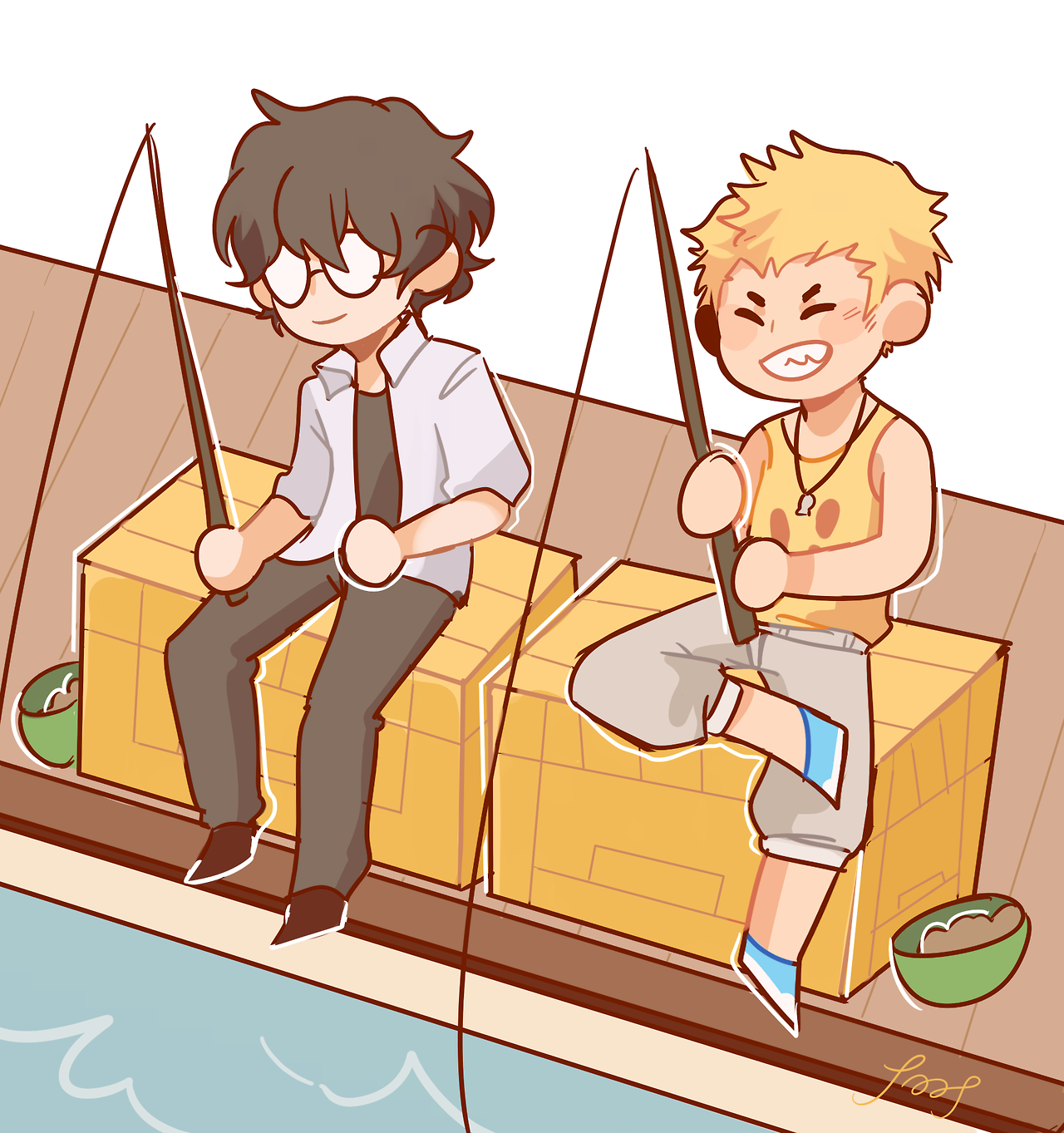 From what I've gathered, the rumblings 'round the web are that fans are thoroughly disappointed by the lack of guy on guy intimacy in a 2017 (*woop woop* current year argument) game that involves both romantic subplots and a main protagonist that is practically a blank slate (as were previous protags). No surprise there! It's silly that you can name them anything you want, have them act like sarcastic jerks or angelic patrons, but YHVH help you should you have a boner for a blue-haired brush boy named Yusuke.

Now, I haven't actually played through much of the game. My back issues have prevented me from wanting to commit to a game I had been looking forward to for so long, worried my impressions would be colored by my pain. However, I have been vicariously living through screenshots, the glorious soundtrack, many unscrupulous spoilers, lively discussion between fans, and, of course, fanart.

Most of the fanart I've procured is of the male cast, whom I've fallen in love with simply by virtue of not being able to have any of them! 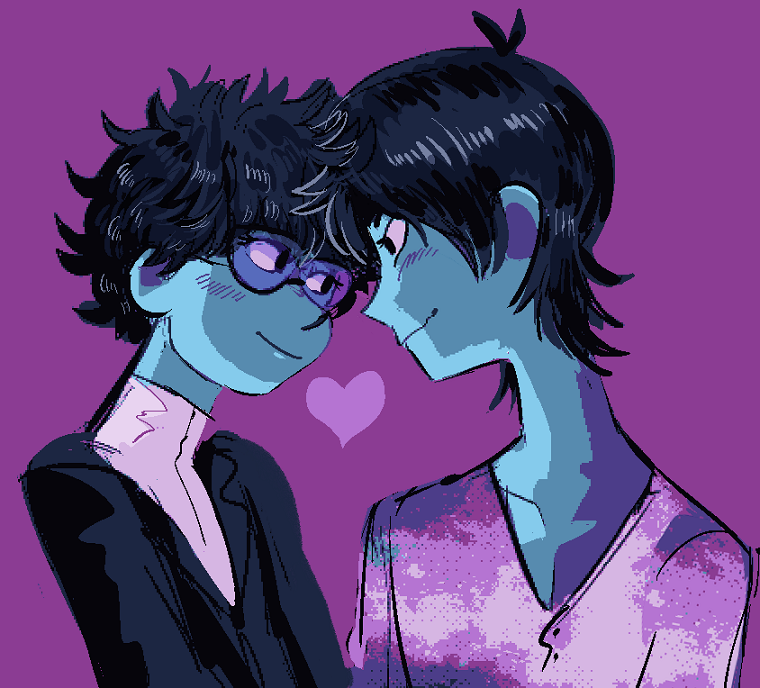 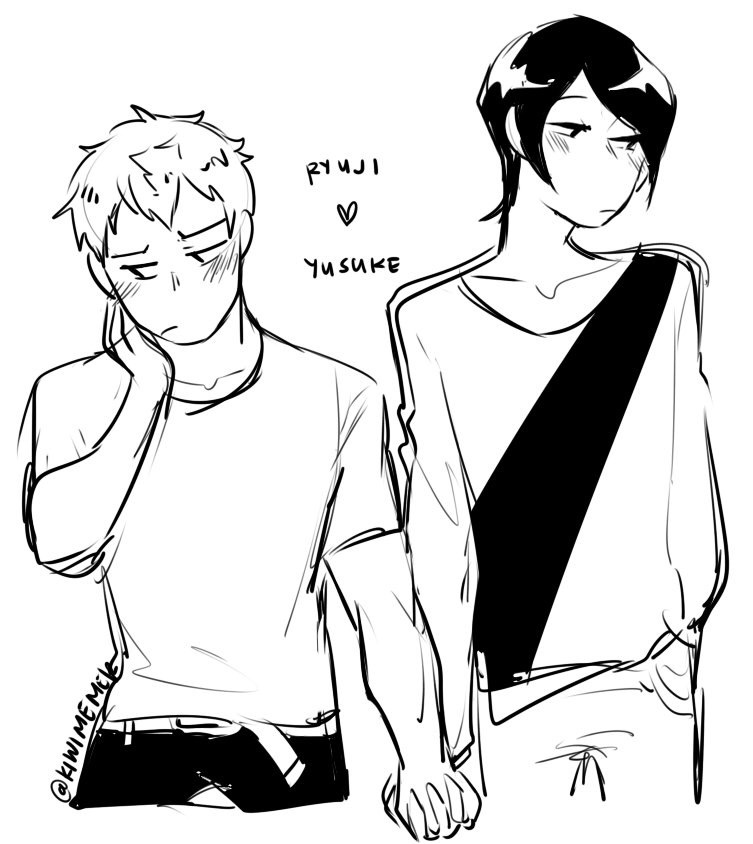 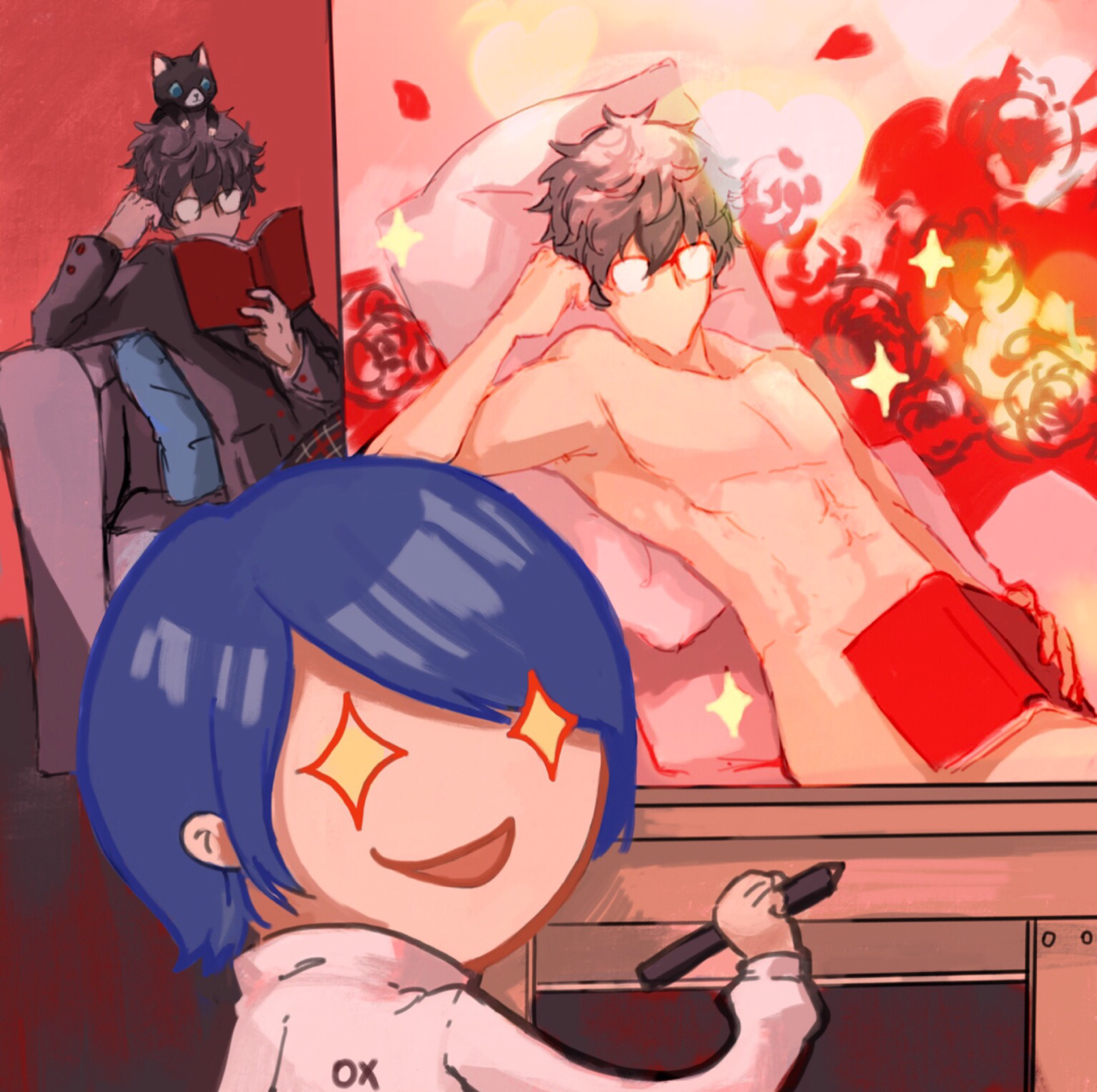 We all know the Internet loves its ships, memes, and trying to best itself in R34 response time for new Nintendo characters and Persona 5's English release has since added even more fuel to that fire lit within the stolen hearts of many new (and old) fans. "Who knew JRPG's could be so good?", "I sure wish Seymour himself had personally recommended these games to me because then I'd be enjoying them even more!", the usual quotes. I'm excited (maybe slightly worried) to see how the franchise grows from here.

In more specific terms, I've not seen nearly as much girl on girl Persona 5 fanart as I've seen boy on boy. The pull of these dudes coupled with what these fans crave which ATLUS has failed to deliver in the wake of Persona 4's (generally) progressive commentary on sexuality and gender norms has resulted in an absolute barrage of hammy fanart. 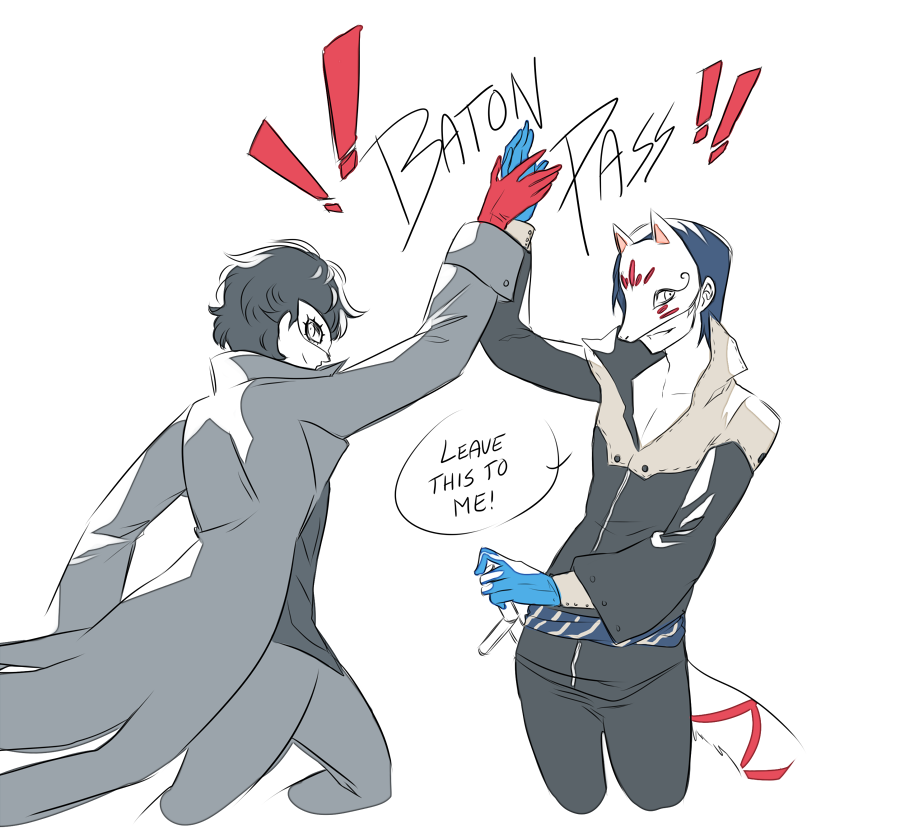 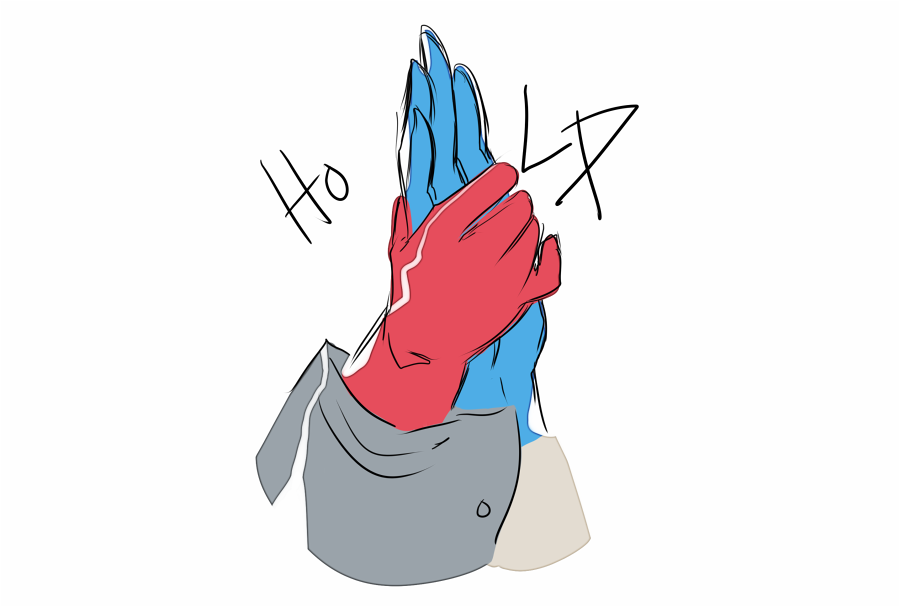 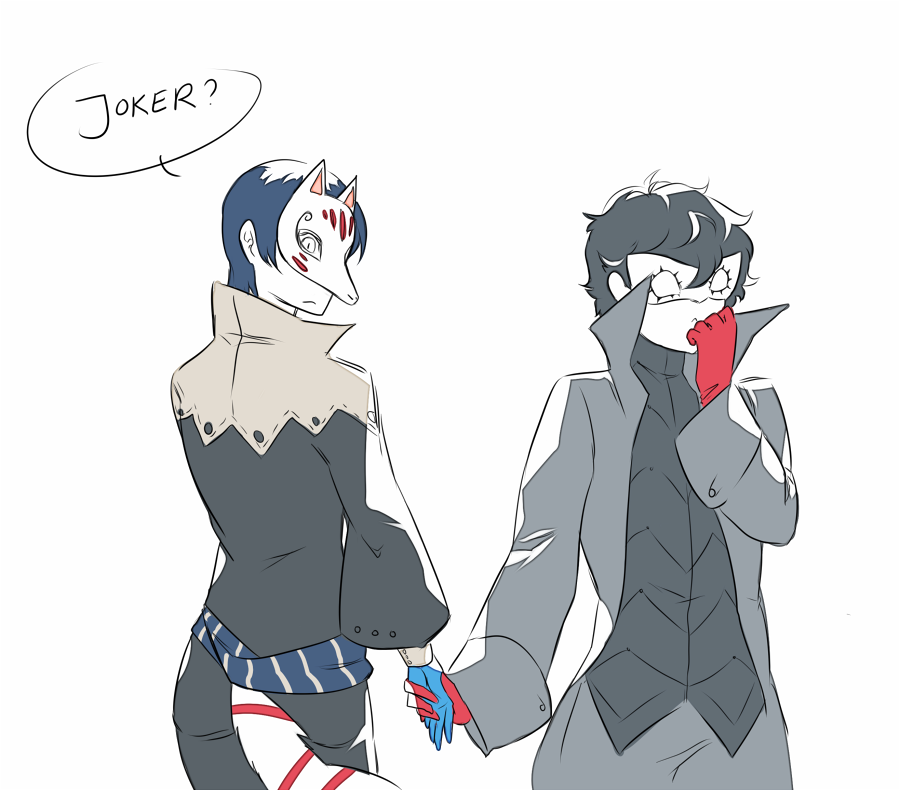 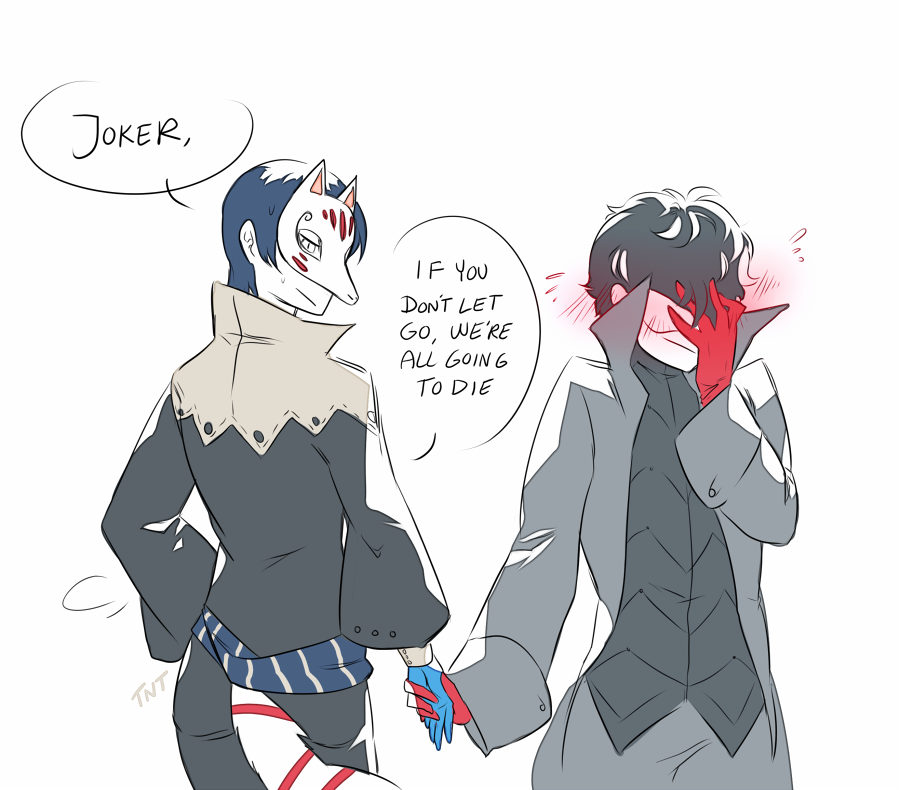 Most perplexing is that a certain social link in Persona 5 is debatably homoerotic, though it does not let you take things any further. The game's own English voice actors have even commented on the topic and wished ATLUS had capitalized on the opportunity.

Frankly, I do not find the romantic sub-activities to be very important (mechanically). Moreso, I'm just a tad bothered by the thoroughly *ahem* straight-laced attitudes these games project when they could be doing so much more and even seem to want to do so much more! In some ways, Persona is very progressive. Persona 2's Jun and Tatsuya fling, as well as Persona 4's Naoto and Kanji come to mind. At other times, it's deeply regressive. From reinforcing the stereotype of the grubby gay perv to anti-transgender "trap" jokes.

These are games about societal oppressions (whether symbolic or otherwise) and kicking them to the curb. What's the point in preaching such philosophy when you'll just play right into those oppressive attitudes for a quick, shallow giggle? 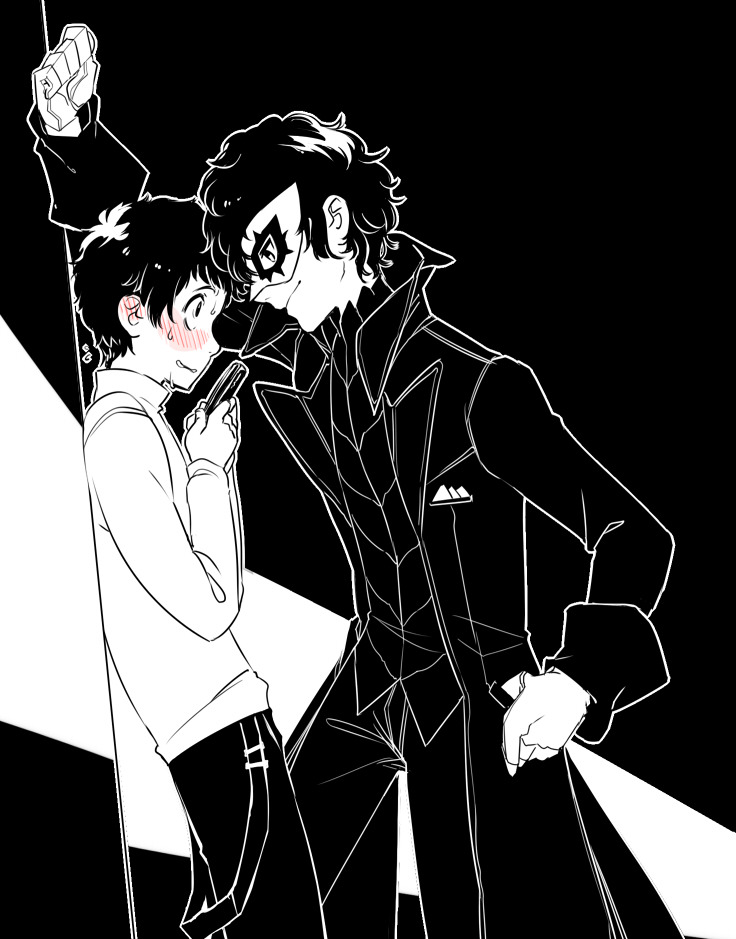 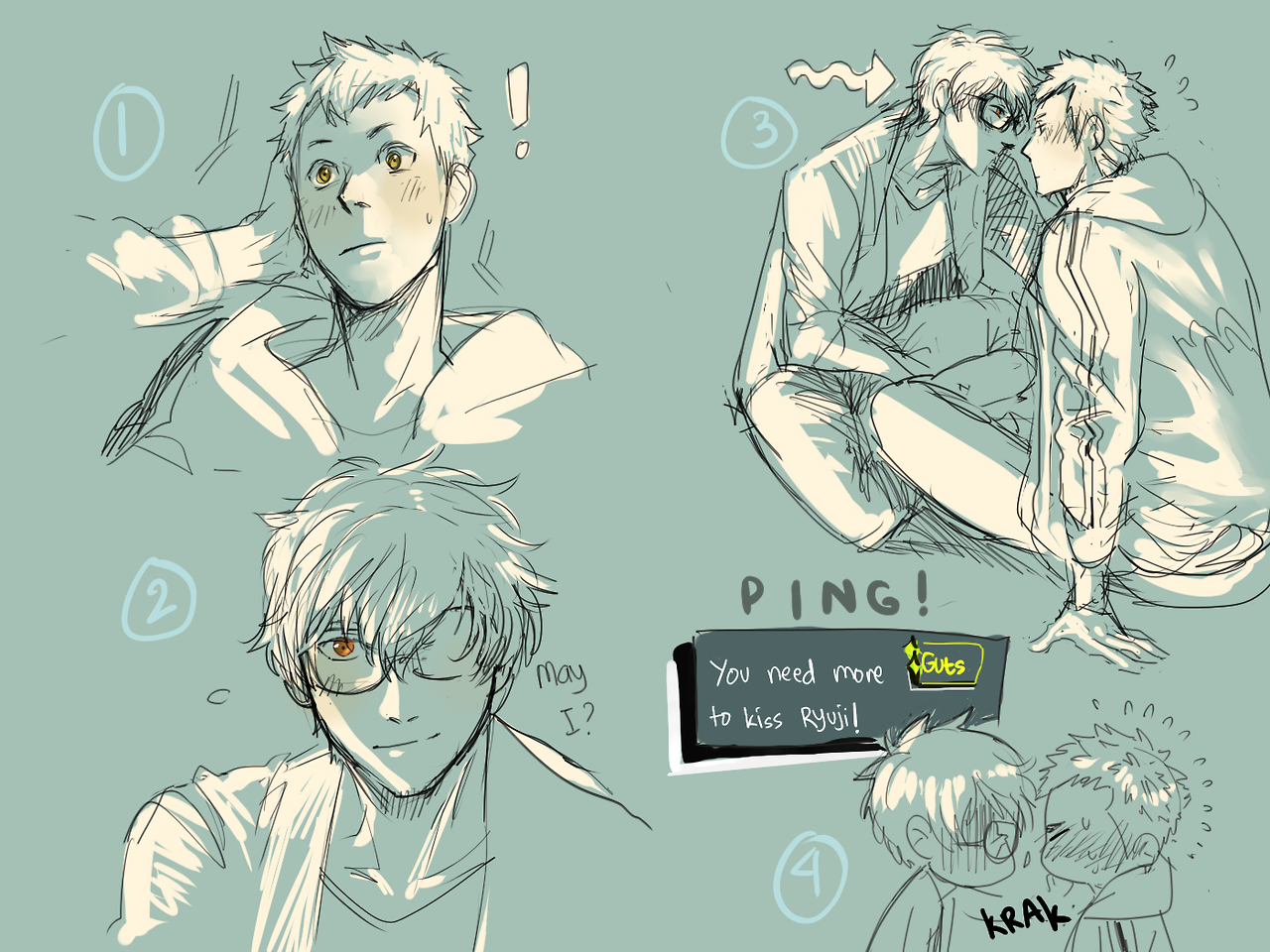 But, that's besides the point.

I would like to get with Ryuji or Yusuke in a big way. 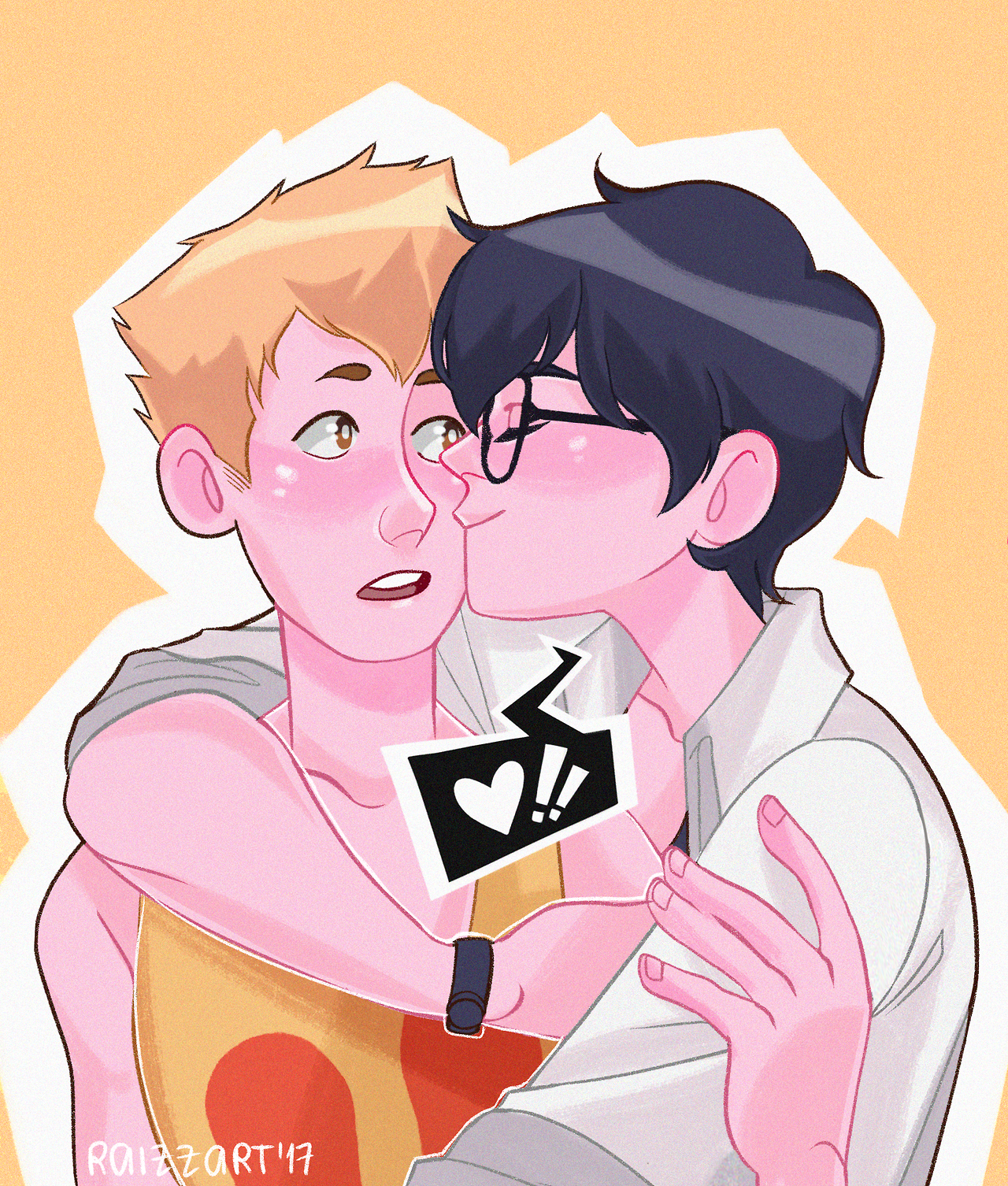 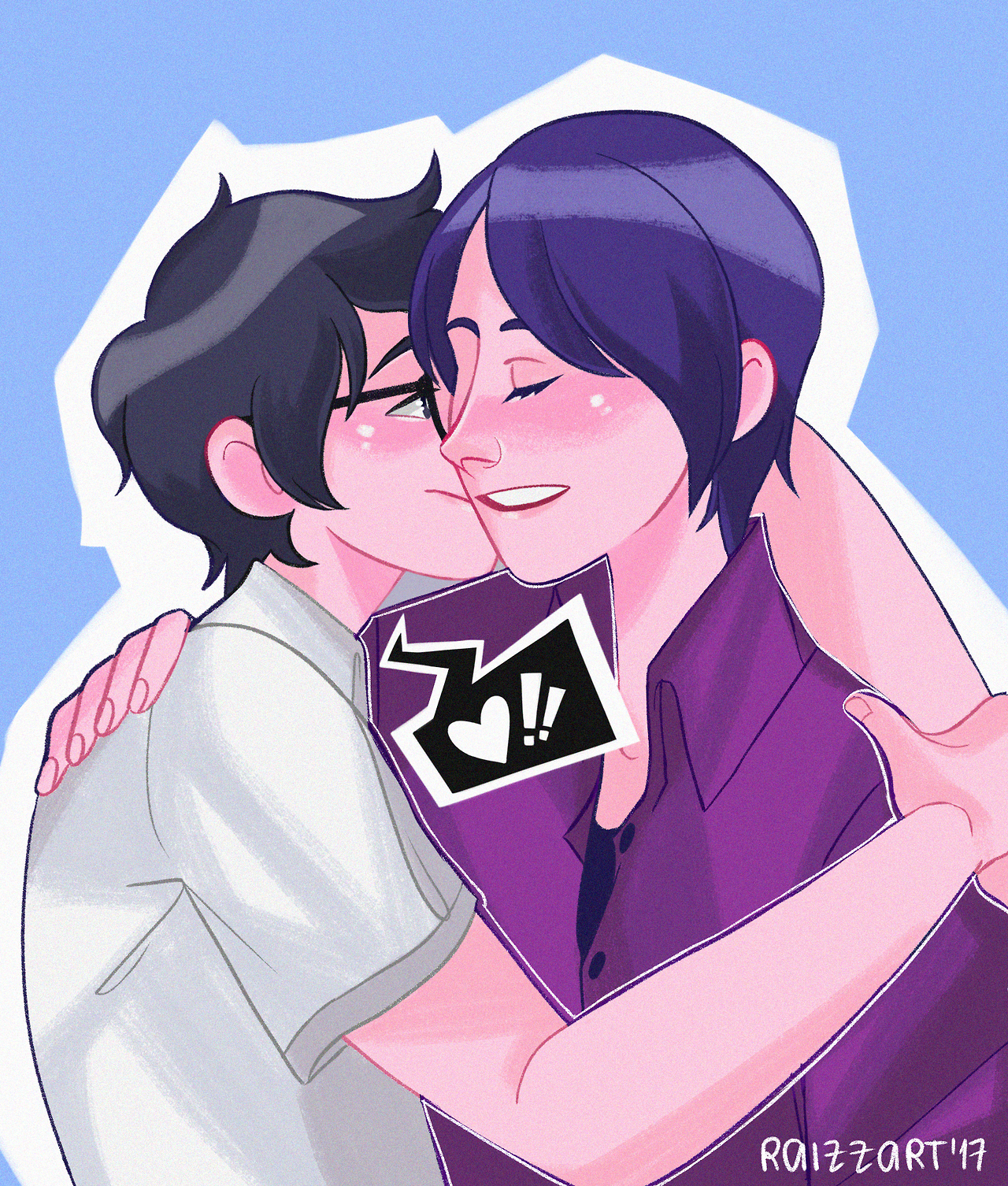 You show me a main protagonist who doesn't somehow become friends with such lovely boys and who then conveniently doesn't bang every single one, I'll show you a me who isn't unhappy about the lack of the gay. 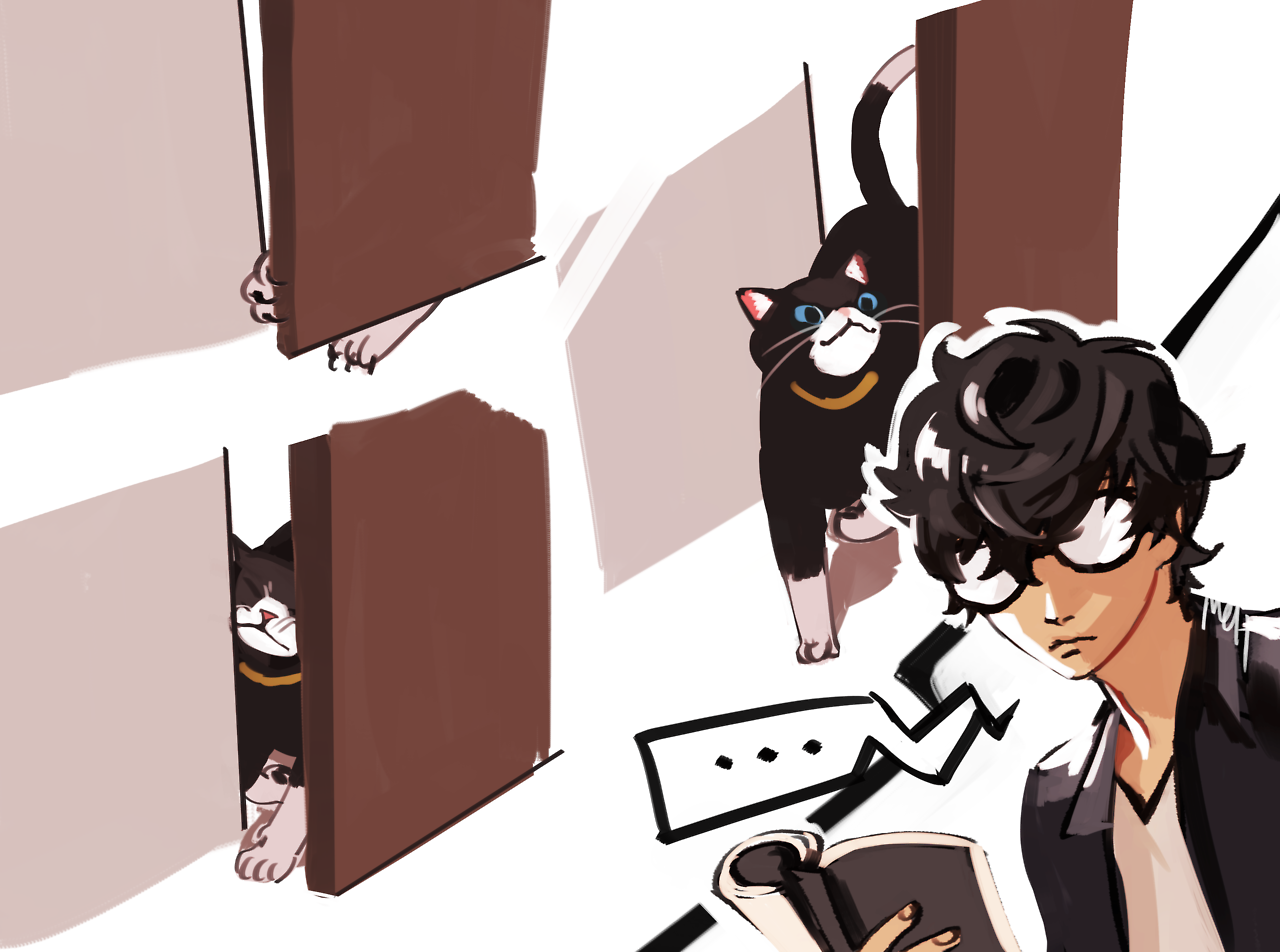 We can only hope that the inevitable re-release of Persona 5 sees us at least 110% more able to gay up the joint. Perhaps we could even have a New Game+ feature where every time you started a new game you could carry over your gay progress and continue to grow in how gay you are across multiple playthroughs. Eventually, you'll be able to topple even the toughest of bosses with just your gayness. 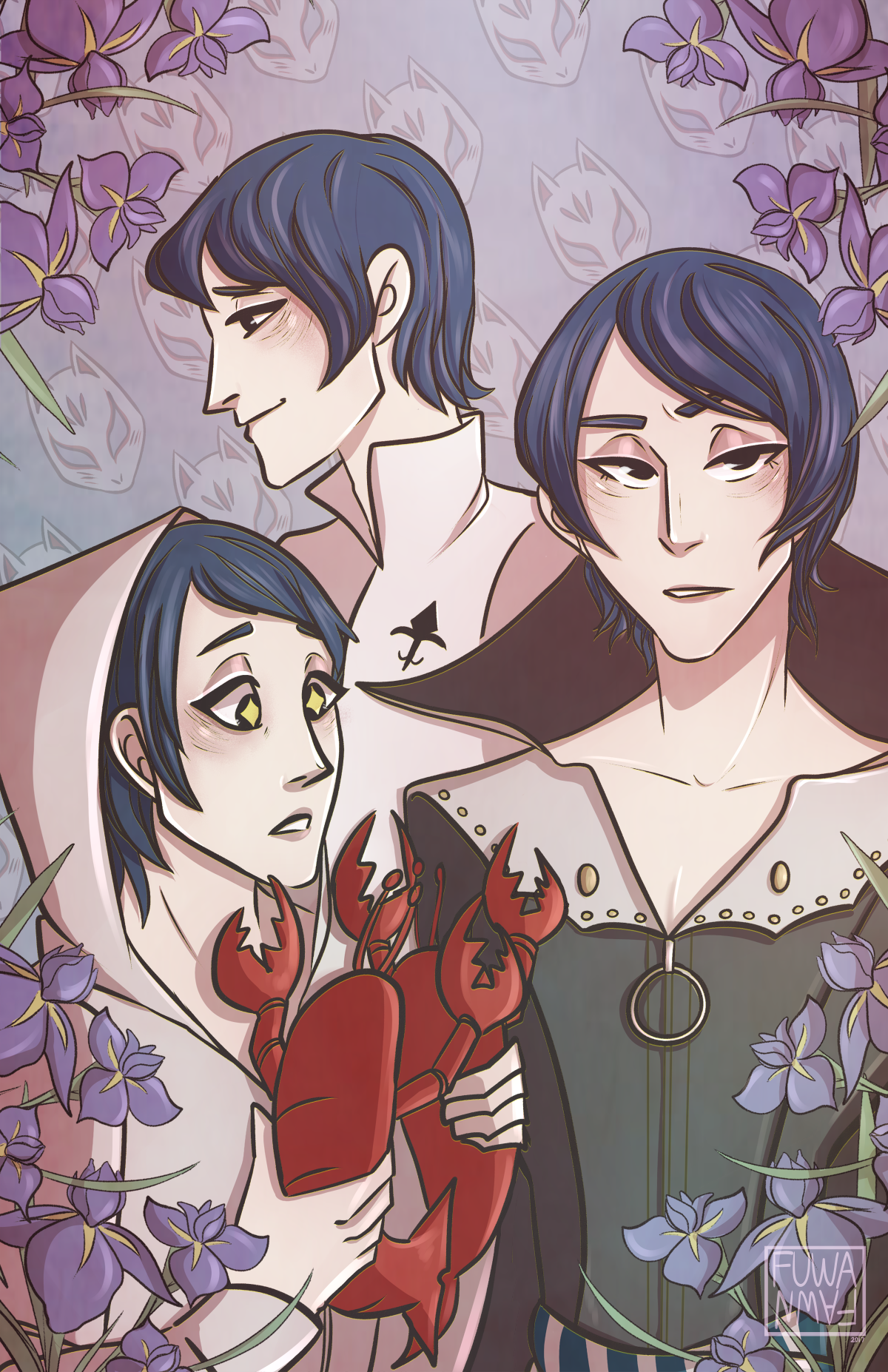 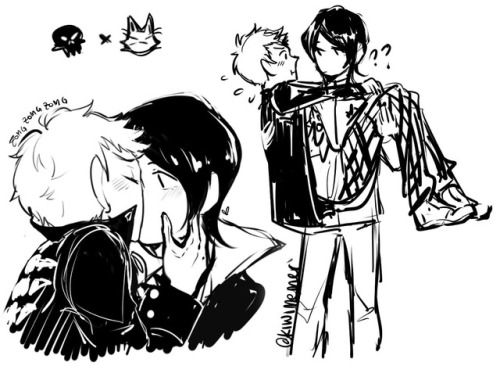 With all due respect, whether you're gay, straight, pan, ayy, or you're not exactly sure... 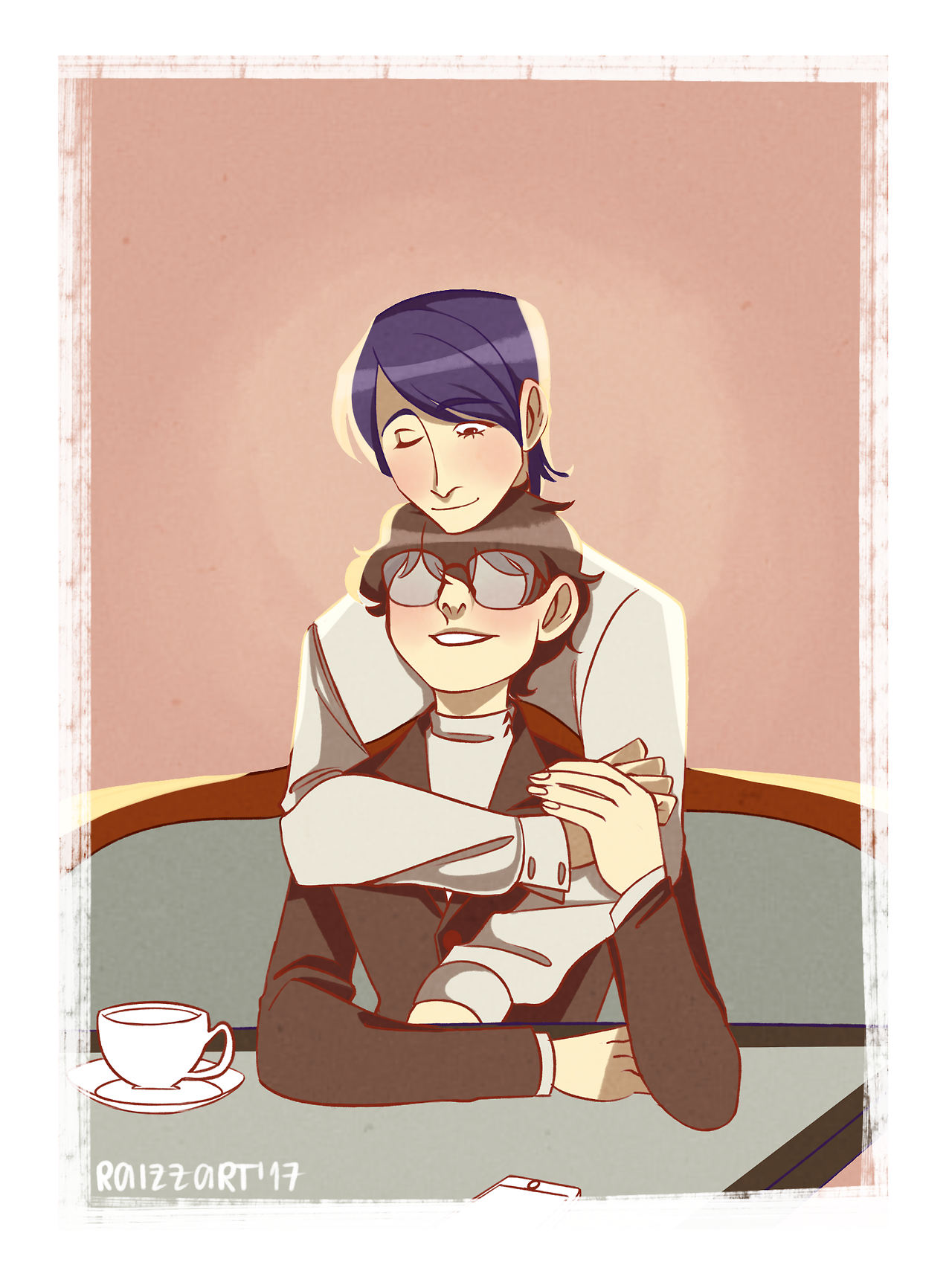 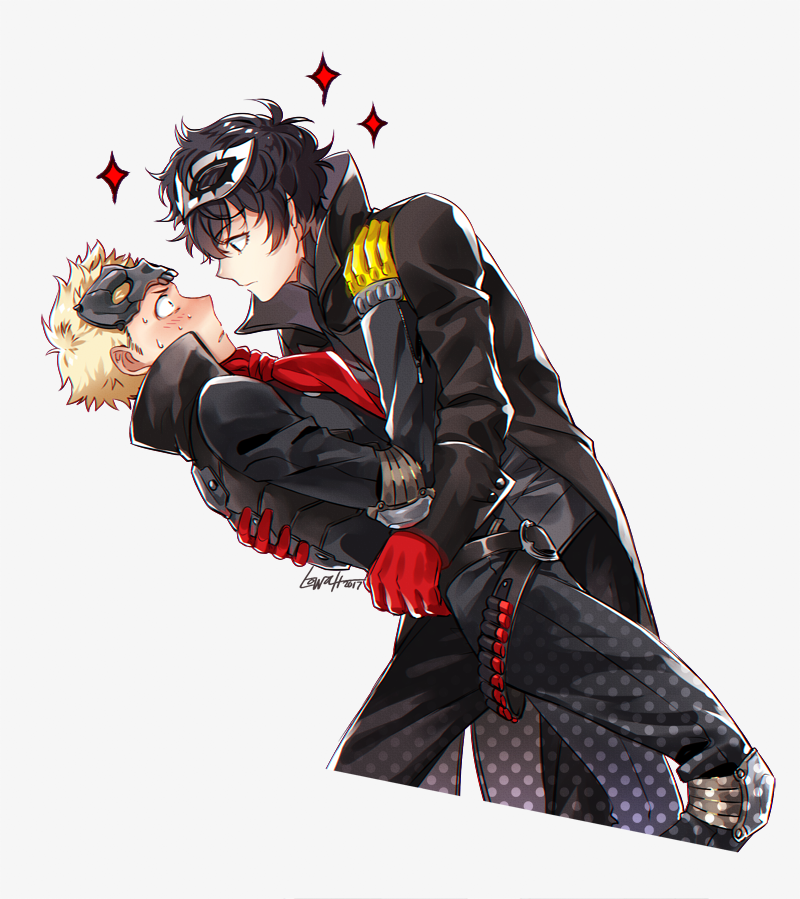 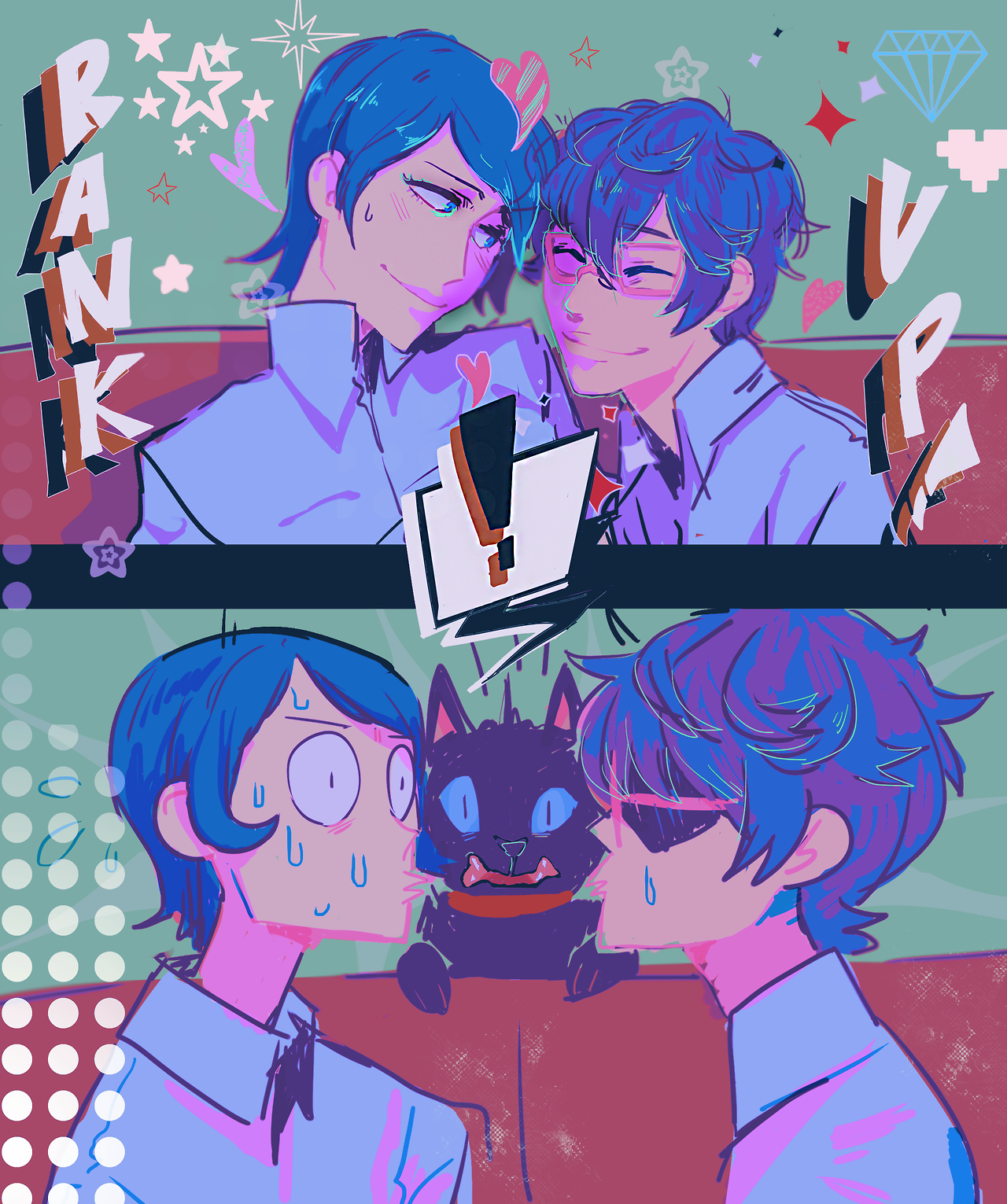 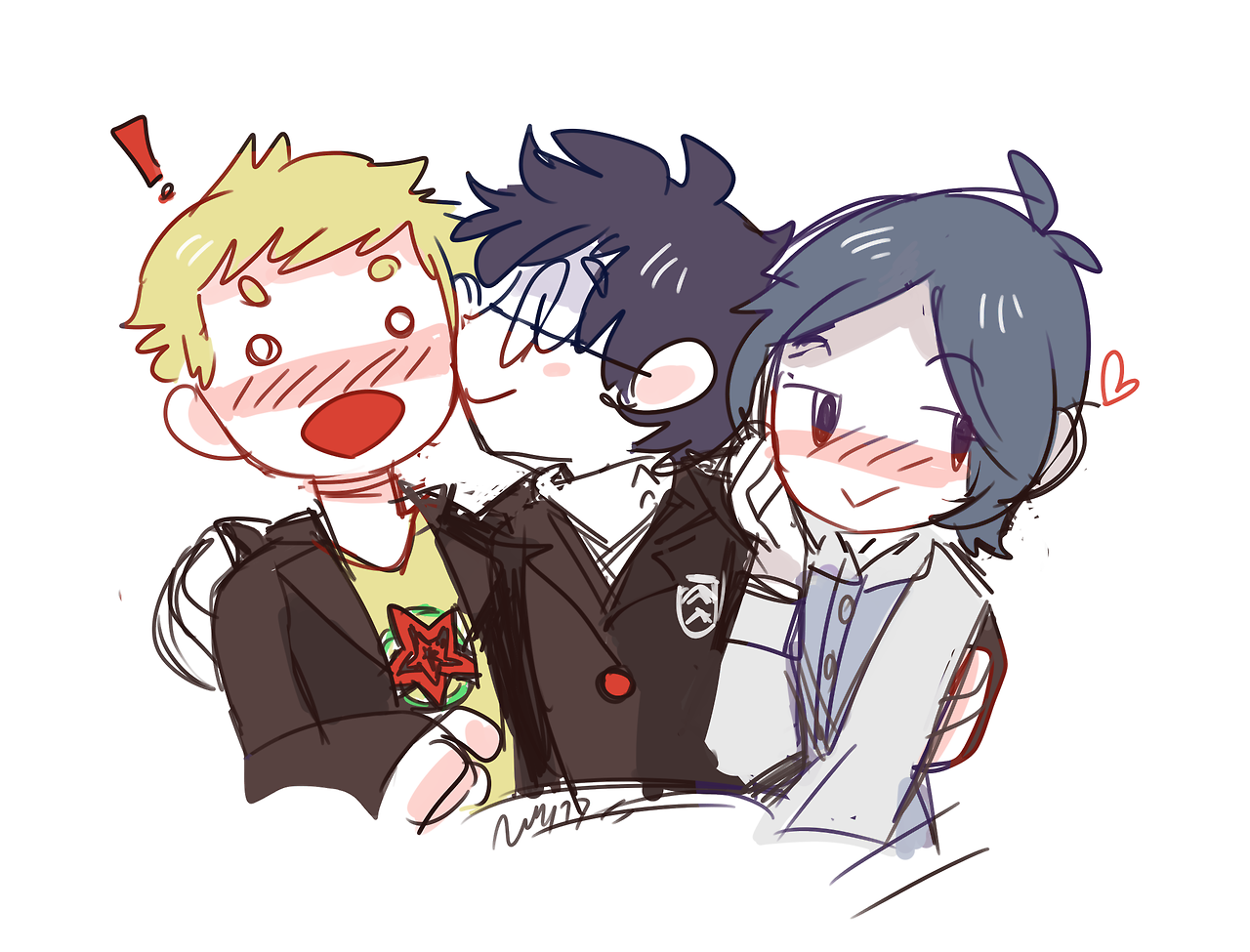 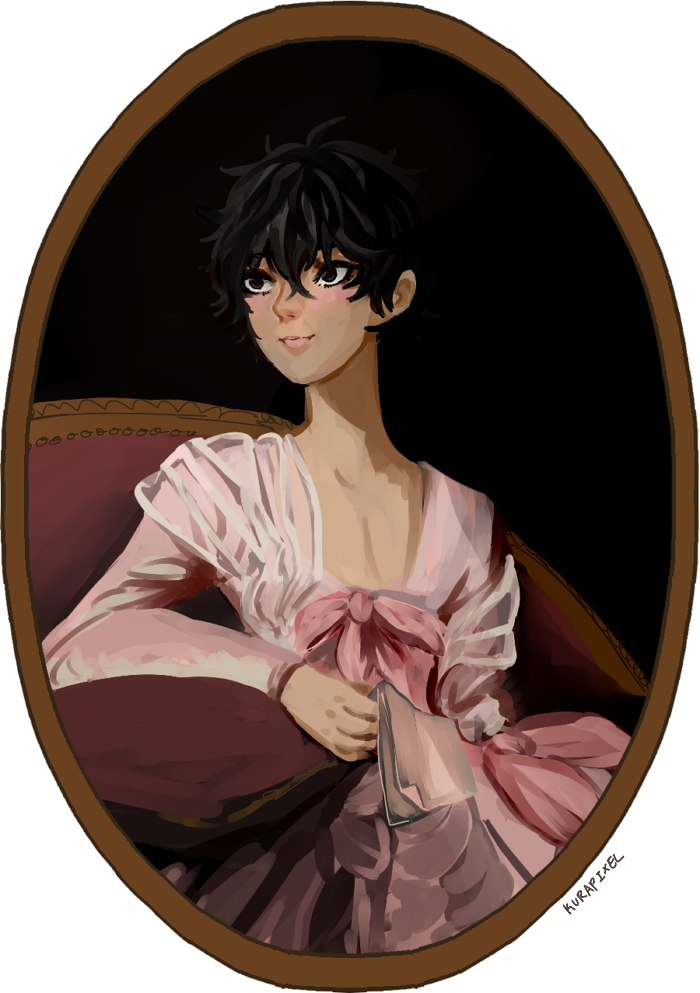 This is Gaymour, signing out! 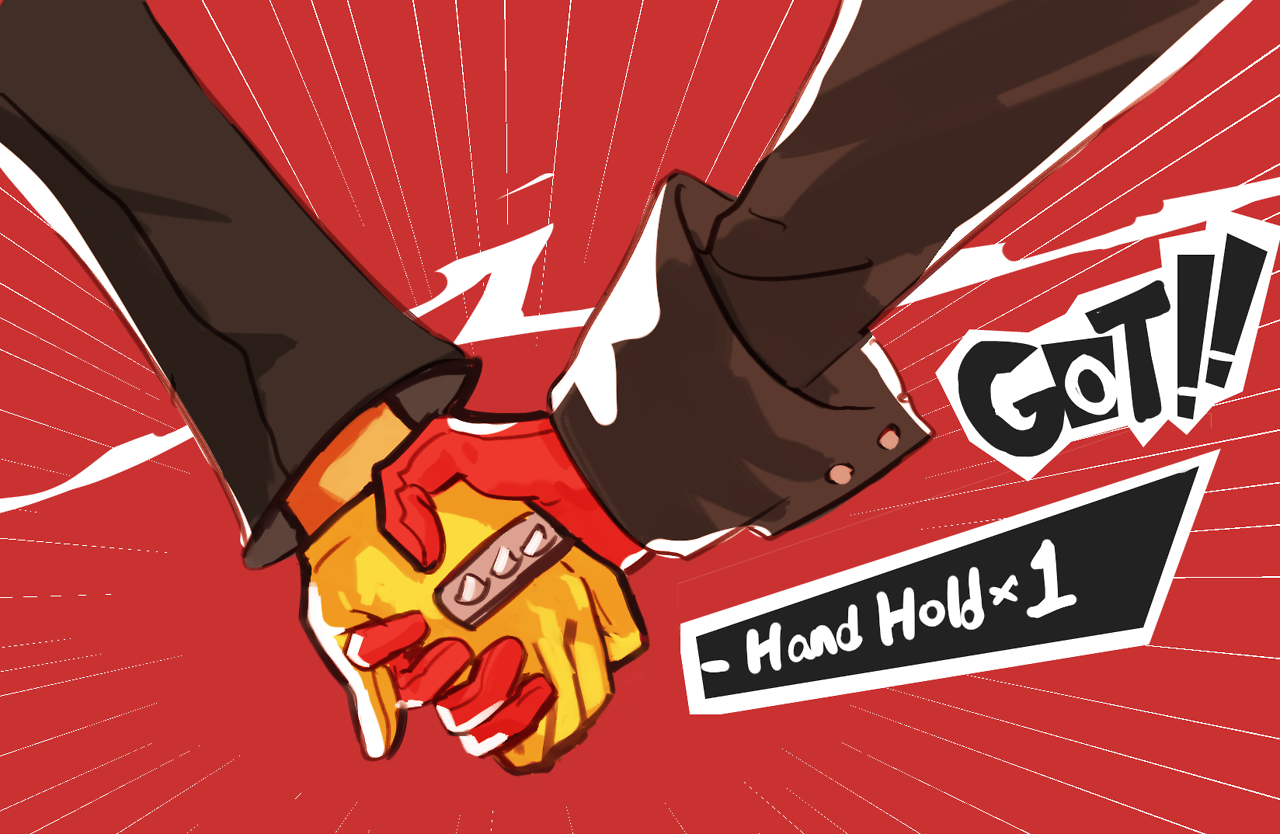 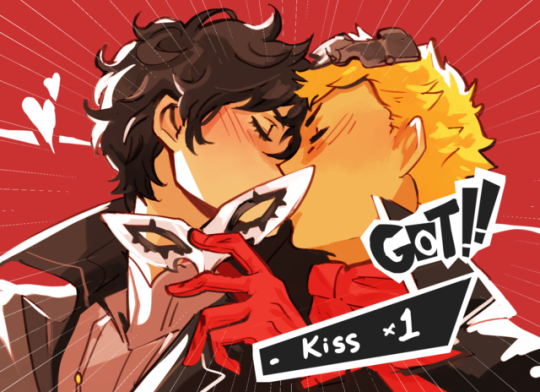 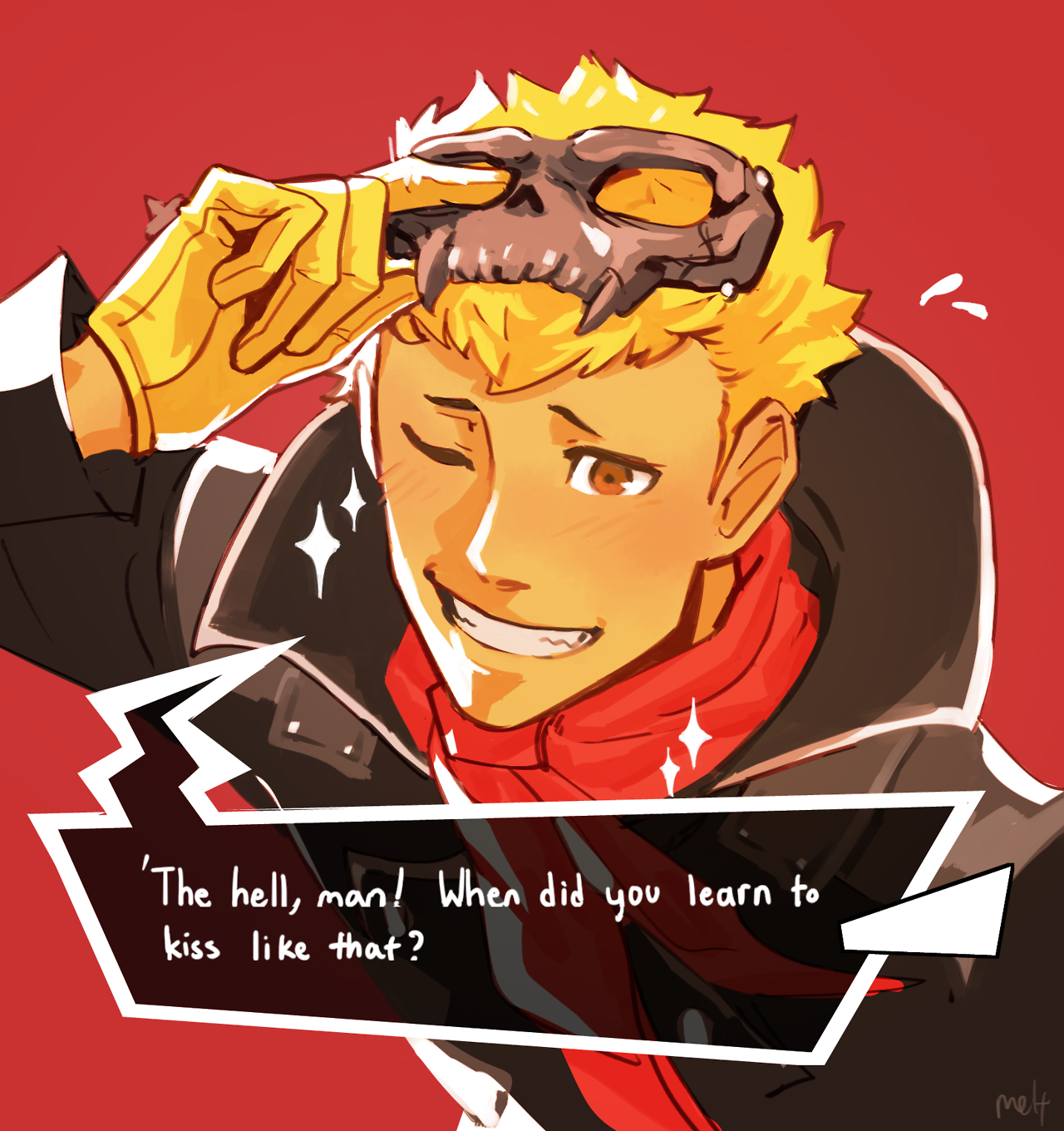 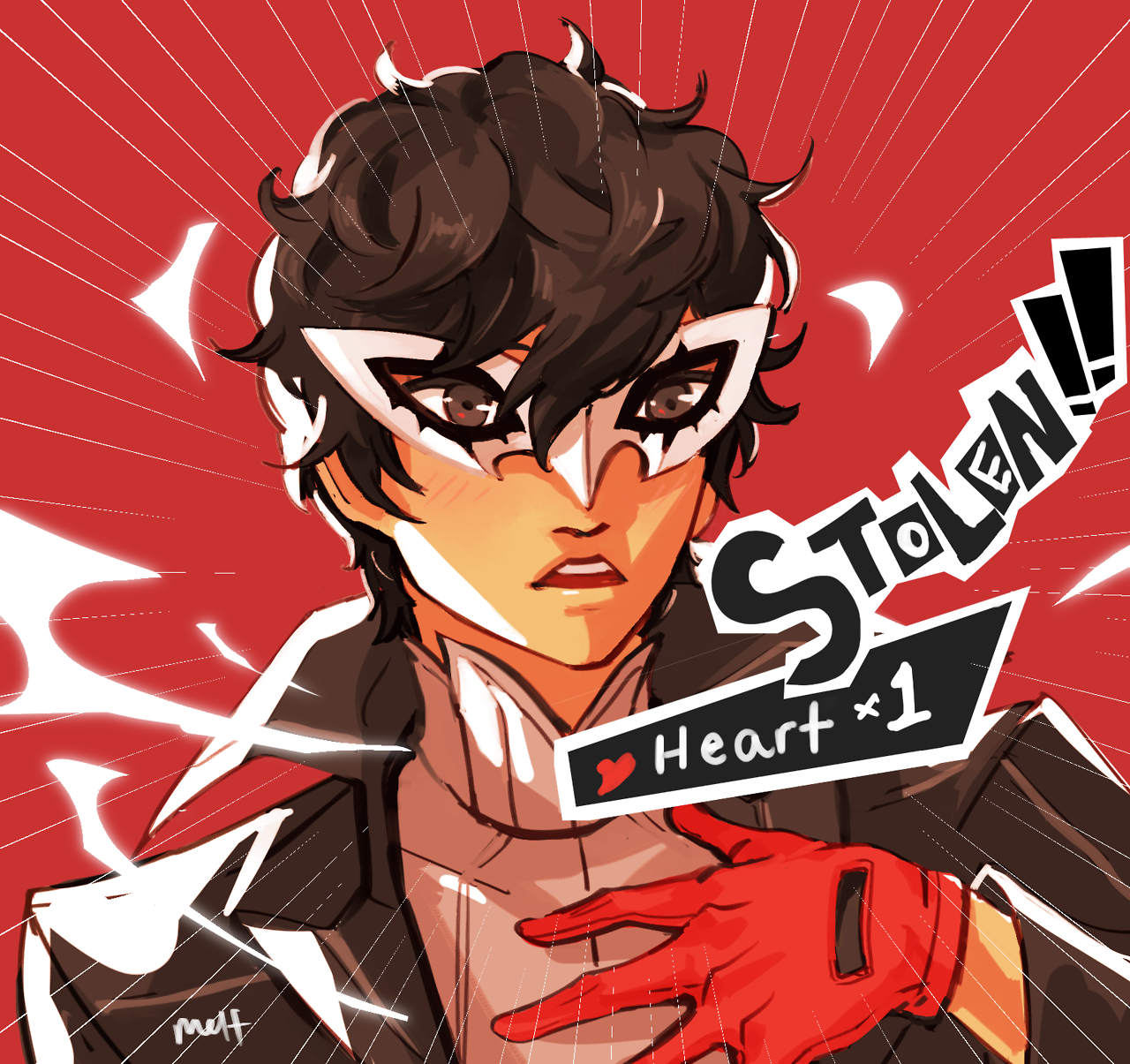