1:51 PM on 06.22.2017 (server time)    0
Warning:  Some gross medical shit.  If you don't like hearing about icky medical stuff then please close this blog, mix a nice stiff drink of vodka, lemonade and a sprig of fresh mint before putting that drink down and consuming a very full glass of tepid Mexican tap water from a dirty glass.  Leave the stiff drink you made on the counter for the people who read my blogs.  :) 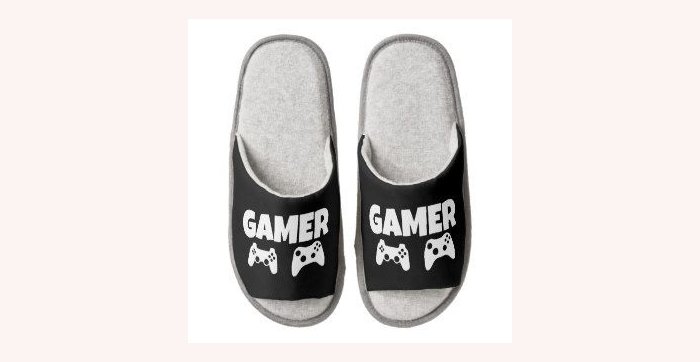 I've been away from Dtoid and missed you all!  Last year at about this time I went through two months of radiation treatments for my cancer and was so damn tired that I slept most of the time (I did play video games when I was awake but had no energy for reading or posting).  Several months after the radiation, about the time I started to recover and regain my energy, new biopsies showed that my cancer had recurred with a vengeance and two of the four biopsies showed invasive cancer.  The radiation apparently did practically nothing...so the only remaining option was a rather drastic surgery called a Pelvic Exenteration.  I went through a new battery of tests and scans to again ensure the cancer hadn't already spread to distant organs, and as everything looked good, the surgery was a go.  I lost 6 different organs and was in the hospital, with NO INTERNET ACCESS, for over a month and then I had home nursing care once I was finally allowed to go home.  The recovery is generally at least 6-8 months for this type of surgery and I've got a ways to go... but I'm adjusting.  I'm actually rather glad I had this surgery at 55 years old... because I honestly don't think I could have done it at 65.  I also could not have done this without my husband who has been there every step of the way and bearing the full weight of caring for me, advocating for my care when I was hospitalized and looking after all the household stuff and the cats. He's an incredible person and I am soooo lucky to have him.  It was a tough surgery and I'm glad I'm home now.  Oh... and note that "no Internet" access thing in the hospital.... like being in pain isn't torture enough.
I'll be blunt and state that yes, I did end up with both a colostomy and a urostomy.  Both are permanent, but it's really not so bad.  Pooping into a bag is actually rather civilized and I have an Indiana Pouch which is a new bladder built from parts of my colon.  The stoma is hidden in my belly button so it's kinda cool that I just stick a catheter in my belly button to pee (and as a woman, I can actually stand up to pee now or I can even easily pee in a bottle! LOL!). The worst part was actually something unexpected.  I ended up with Lymphedema in my left leg.  Apparently with either the radiation or surgery, my lymph nodes were damaged and my left foot rather painfully swells up.  Still, I'm alive and hopefully I'm cancer-free.  As an added bonus I lost almost 30 lbs while I was in the hospital so I'm now at a weight I  haven't been since my 20's! 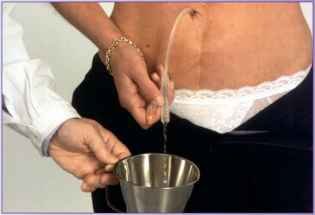 Yes, this is how I go for a pee (though I have a longer cath and just piss into a toilet - like a guy). I hope my scar ends up as nice as this one when it finally heals though!
I won't dwell on the medical fun times except to say that it's SOOOOO NICE to finally be home and have access to my PS4.  I used the PSP a lot while traveling for tests and when at the hospital with no Internet access, and it was wonderful (thank you again to those that pitched in to buy me such an AWESOME gift!)... but it's just not the same as playing on my PS4.  My PS4 is comfy slippers.  It's comfortable, familiar, and I guess more importantly, it's in my own home... where everything else is also familiar and comfortable.  Most people truly are creatures of habit.  We like the familiar, we like the comfortable.  Once I got home I played Rise of the Tomb Raider.  The game was fun... but also familiar.  Puzzle jumping, shooting some bad guys, explore the area, collect some collectible stuff... I'd been there, done that... though it was a new environment, a new Lara (as it is with pretty much every TR game), a new plot (stop the bad guys from getting the relic where they could rule the world... hmmm... maybe not such a new plot!).  I finished off Tomb Raider in record time and moved on to Assassin's Creed: Syndicate - another game in my backlog.  Again, it was a comfy slippers game.  Find the tall building and climb it to unlock the area.  Kill the area bad guy/girl.  Collect a bunch of collectible crap (which I just gave up on because I am not anal retentive enough to collect all the collectibles in most games).  The game was comfortable, familiar, but basically in a new fabric or color.  I'm now back to playing Neverwinter.  It's a pretty awesome free-to-play game that I ended up enjoying even more than ESO.  It's very much driven by farming, repetition, and familiar quests as the basis for most days activities... but with an overlay of new areas, new events, new weapons/armour/crap.  This game actually makes money off of being familiar, comfortable... just like those early Neverwinter, Icewind Dale, Baldur's Gate games.  People buy the cosmetic stuff... the cool mounts, the add ons that cut some of the grinding because of that human "I really want that thing now" emotion that drives many people.  I threw some money at the devs because I enjoyed the game so much and after 100 hours or so I figured they deserved a little of my money.  The game is comfy slippers... something familiar to do for a few hours as you do the daily tasks the game wants you to do every day to get that cool new weapon or outfit. 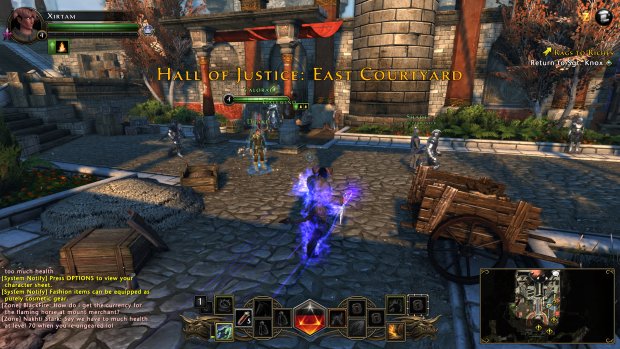 Neverwinter - looks the same as most other MMOWRPG's!
I often see complaints about how games aren't  innovative.  That the newest game in a series is just like the other games.  That all FPS games (or platforming games or JRPG's or fighting games) are all the same.  The fact is that developers run a delicate balance between offering something that is familiar and comfortable for gamers to play... but just slightly new and different enough,  with enough variances, innovations, improvements to warrant gamers being satisfied with the new game.  Too many changes and they lose their audience (See Devil May Cry,  Resident Evil, Starhawk) too few... and they may see a gradual erosion of their gamer base (see Call of Duty).  The reality is that people LIKE the familiar, the "same", the UN-innovative - it sells in video games, movies, TV shows.  Gamers will buy Call of Duty or Mario games over and over and over again.  Pokemon, The Sims, Elder Scrolls - most successful franchises stay successful by being comfy slippers and not straying too far from the previous incarnation.
Life is still rather upside down for me right now.  Gradually I'll adjust and eventually "going to the washroom" will become more normal, more comfortable, more routine and entirely forgettable.  It's nice to have those fuzzy slipper aspects of life and we should never under-rate the power of the boring.  In video games, the boringly familiar allows us to more easily escape, to quickly adapt, be comfortable, enjoy a game... with no frustrating learning curves or issues.  Sometimes that's a wonderful thing and not to be frowned at or looked down upon... so don't bash all those sequels we just saw at the various E3 conferences.  They sell because the fact is that a lot of us have enough new, different, innovative, interesting, difficult, emotional, stressful, challenging crap going on in our real lives.  It's nice to curl up for a few hours in comfy slippers and enter a familiar world where things are predictable, stress free, and familiar... with a spiffy new gloss of graphics, story, environment or game mechanics that make it "new" - but not too new.
Anyways, hopefully I'm back and y'all will see me around here more often! :)
Login to vote this up!