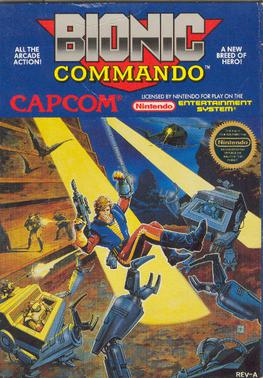 Thank you Capcom for making this game and actually deciding to localize it here in the US back in 1988. Yes kids this game came out 19 fucking years ago, which makes the same game in my collection older than most of you here DToid. At the same time, a bunch of you old fuckers like me are saying...I LOVED THAT GAME!

As I said in one of my top ten lists, this was the first game I ever owned for my NES. My parents decided I didn't need ROB, a Zapper, or even a pack-in game. Yep, I got the cheap "core" system for the NES. But that's not where the story lies. The story lies here, within this thick ass NES Game Pak.

Before tonight I had no idea that the name of this game wasn't Bionic Commando. When this came out in Nihon, it was called Top Secret: Hitler's Revival. I don't know about you but I think any game title that has Hitler in it is sure to be gold. But no, Capcom decided to not only change the name of the game but also changed the enemies in the game from Nazis to "Badds", and the Nazi swastikas were replaced with Albatrosses. Luckily they kept the end sequence intact. Thats not for this paragraph, I'll save that for later just so I don't SPOIL it for y'all.

The premise is simple, you are a bad ass commando who happens to have a bionic arm. Wait, where did he get the bionic arm? I'll tell you, back in the late 80s if you were too poor to buy the game, you could...buy the novelization!

Apparently Nintendo decided to make a series of novels known as the 'Worlds of Power' and Bionic Commando was a target for one of the books. According to the novel, your character (named Jack Markson) loses his arm to Ninjas when they attack your hotel room and Kidnap 'Super Joe'. As to what hotel doesn't have proper anti-ninja devices or why Super Joe was doing in the same hotel room as your character, I guess we'll never know.

Some of the more astute readers out there will jump at the 'Super Joe' name and wonder where they heard that from. That was the same name for the main characters in Commando, Bionic Commando (arcade), and Speed Rumbler.

Back to the story, you are a Bionic Commando and you are on a mission to save your buddy Super Joe from the clutches of the Badds (Nazis) led by Master-D (Hitler). You must traverse through a multitude of levels (many of them are non-linear). Though the kind of non-linear is on the same page as Metroid, meaning that you can't go some places without special equipment.

Finishing a stage would usually net you a new piece of equipment (a new radio or weapon). There were a few stages that were 'Neutral' territories where you could talk to the citizens to find hint on where to go next. Some of these towns would also have enemy troops in them, though you must not ever fire your weapon within a neutral stage, otherwise all hell breaks loose and they will attack you until you leave.

The level design was really nice, whether it be Nazi stronghold, listening outpost, snow level, underground base, mountain lookout, shipyard, etc. The neat thing about the stages of this game is that there were many places to grapple to. Back in the NES days kids, you had 2 buttons you could use, jump and shoot...this game involved lots of shooting, but no jumping. You got it, you could only walk left or right, there was no jump, you had to use your bionic arm to grapple up ledges, or in the case of some levels, to swing across chasms.

The animations for the grappling and swinging were amazingly fluid for this being out in '88, not to mention a hell of a lot of fun. All of the sprites are pretty nice for a NES game, the stages all look like they should. They even went to the trouble of including more detailed sprites of characters when they're chatting in game.

The game's difficulty level was not forgiving. You got maybe through the first level before shit got hard, and fast. You can only take one shot, yes 1 shot before you are dead. Luckily this game allows you to collect 'bullets' from dead soldiers that let you level up to being able to take 8 hits 'til you die. Once I figured that out. I'd generally spend a good hour killing as many troops as I could on the first level to be decently strong enough.

I have much love for this game. Thanks to game companies like Capcom who were willing to take a risk to localize and censor their work (thanks Nintendo of America!!!), people like me were able to have games of this caliber to play (then) and reminisce about (now). I highly suggest that you find a way of playing this game. Legally or not, it's worth the risk to see a game that shaped a whole generation of gamers like me.

Oh yes, before I go. I wanted to tell you all about the ending. If you haven't played, skip this paragraph unless you want it spoiled. The last boss fight is between your character and Master-D. The last shot you make with your special Bazooka pierces his helicopter's cockpit and this is what you see...

Amazingly and thankfully it wasn't censored out! This remains one of the most gory (yet satisfying) images I ever saw on the NES...keep in mind that this was all happening when I was 8! So Jack Thompson, how's that for warping a child's mind? Hope you all enjoyed this post, I had a great time writing it. Thanks again for reading!