What Happened to Paper Mario? A Retrospective

So I’ve just gotten started on this blogging business and I didn’t want to throw up a “hey everybody, nice to meet you” post without some sort of other content attached. This might speak to my inability to talk to strangers without feeling like I’ve justified my presence to them first, but whatever. I’m Deediddle, and here’s a quick dissertation on my favorite RPG series. 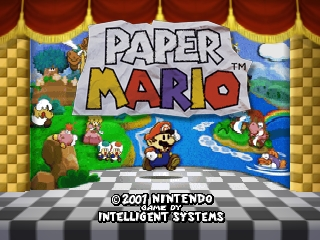 I don’t think Paper Mario on the N64 was my first video game—I believe that was the GBA re-release of Super Mario Bros. 2—but it’s the game from my childhood that has stuck with me more than any other. In those days, anything with blinky lights that changed at a button press was high-class entertainment for my useless, over-stimulated child brain, but Paper Mario was a very special game for me. At home it dominated my playtime on the magical green box, and I have fond memories of trying to power through the game with my dad on those rent-a-N64s that hotel rooms used to stock. The original Paper Mario is a colorful and inventive masterpiece, and while it certainly shows its age when I play it now, the charm of the world and the strength of the writing carry the game to this day.

Fast-forward a few years: new house, new city, new friends. I spend the afternoon at my friend Alex’s house after school and find that, not only does this new companion of mine have my favorite game, he has a sequel to the game on the new GameCube. For a kid who couldn’t use the word “sequel” in a sentence, this was big stuff. I didn’t even know the game existed an hour ago, but suddenly my N64 seemed woefully inadequate. By the end of the year I was the proud owner of a silver Nintendo GameCube and Paper Mario: The Thousand-Year Door, which remains to date my favorite video game. If Paper Mario is a work of art, The Thousand-Year Door is the Louvre. It took the Paper Mario core, cleaned up the art style, beefed up the world, and tightened the writing to perfection. It’s the kind of expansion on the original that a video game sequel should be, and it’s absolutely worth your time to this day. 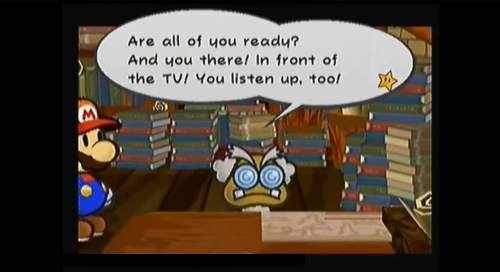 Then came Super Paper Mario. It’s funny now to think that Super Paper Mario was a disappointment for the series at the time—now that we’ve been blasted by 10 years of mediocre Paper Mario sequels. If you’re not aware, Super Paper Mario took the turn-based RPG combat of the series and switched to a combat style like that of the traditional Mario platformers. Hence the “Super” in the title. In retrospect I have a lot of respect for series developer Intelligent Systems for trying something new with the property, and the writing and humor are still there, but the tighter story and gameplay focus of the earlier games was lost in the switch.

(Not this one, but you get the picture)

After Super Paper Mario, the pain train kicks off. At E3 2010 we saw some screens and brief footage of a Paper Mario RPG on the 3DS that looked like a return to the traditional style of the first two games. Solid. It’s 2010 and I’m not quite old enough for any self-destructive habits like video game blogging yet, so footage of a new Paper Mario that looks like TTYD is about as much action as I ever see in a day. 2010 me could only look forward to his future self maybe possibly having a girlfriend. Although 2017 me doesn’t have much to report on girlfriends, and odds also aren’t looking great for 2024 me either. At least I’m consistent? 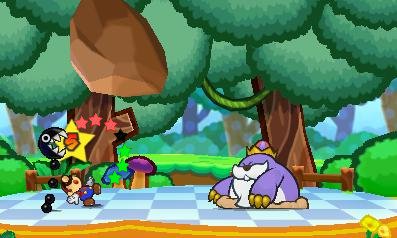 (Everything looks good so far!)

The game drops in late 2012 as Paper Mario: Sticker Star, and although I’m still optimistic at release, all the warning signs in the world were already there. First the partner mechanic disappears, then it turns out that combat is based around limited-use items in-game. Whatever. I trust Intelligent Systems. I got the game along with a new 3DS XL for Christmas, and spent the better part of my Christmas break devouring the game. Was Paper Mario: Sticker Star a return to form for the series? No. Paper Mario: Sticker Star was for me the video game equivalent of Bruce Wayne seeing his parents get shot. Actually, no. Let me clarify that analogy: it was the video game equivalent of Bruce Wayne getting home from karate or school or whatever idiot 9-year-old Bruce Wayne did to fill up his days (probably spending his parents’ money) and finding out that his parents overdosed on heroine. He goes to check their pulse, but before he can get to them, Alfred steps in, hands him a note that says “sorry” and shoots himself in the head. That was Sticker Star.

I’m not saying I was emotionally traumatized by a video game underwhelming me. That would be absurd. But the analogy gets my point across: Nintendo, the developer who could previously be relied on to make things I like, had blown it on the thing that I liked most. Even Roger Federer can hit a ball into the audience sometimes.

Now, full disclosure, reader: I haven’t played Mario and Luigi: Paper Jam or Paper Mario: Color Splash. I live in a (mostly) free-market economy, and it’s my practice to not give money to people if I don’t think the product they’re going to sell me is very good. I’ve heard from some people who have previously voiced opinions I agree with that Color Splash is at least a step up from Sticker Star and Paper Jam, and while a step up from “triple Batman suicide” might not be much, I at least plan to check out the game when it costs less than a week’s supply of Chipotle burritos. If I’m going to spend $60, I’m going to spend it on something that I know I’ll enjoy. The point is, the Sticker Star implosion left one major question: what happened? Like Bruce Wayne in counselling, all I could ask is why on Earth these previously-trustworthy and wonderful people had done something so awful. Or in Sticker Star’s case, aggressively bland.  Fortunately for you, reader, I’ve done some research on this subject. About two years ago I did a decent bit of research in service of a Youtube video about the Paper Mario series that I would go on to never make. I had a script ready and everything, but couldn’t be bothered to figure out how I was going to get footage of the games. Since then several Youtubers have come in and stole my thunder by making video similar to the one I had in mind, so I don’t have much in the way of proof to defend my claim. At the very least I’m glad to see that there are people out who feel how I do. I suppose that’s why I’m writing this.

So who is to blame for the Sticker Star situation? Long story short, blame Shigeru Miyamoto. Blame him for Sticker Star, and Paper Jam, and even Color Splash. Then realize that he’s still done way more good than harm for the industry and it would probably be a waste of time to hold this one transgression against him. But it was his fault.

(Look at him. Making children around the world happy. Disgusting.)

The best (read: only) primary source we have for this information is from the Iwata Asks interviews that lead up to the release of Sticker Star. Series producer Kensuke Tanabe had this to say of Miyamoto’s involvement: “Aside from wanting us to change the atmosphere a lot, there were two main things that Miyamoto-san said from the start of the project: “It’s fine without a story, so do we really need one?” and “As much as possible, complete it with only characters from the Super Mario world.””

I could—and have, in other venues—discuss the implications of this quote in much more detail, but suffice to say it’s clear that Miyamoto is at fault here. This certainly explains why the otherwise-competent Intelligent Systems (who, earlier that year, released the excellent Fire Emblem: Awakening) went so far off the rails with their previously consistent series. This isn’t the first time Miyamoto has intervened in a first-party developer’s interpretation of his property, either: readers who (unlike myself) were past kindergarten in 2002 might remember Miyamoto’s interference in Rare’s Dinosaur Planet. Miyamoto took Rare’s Dinosaur Planet, an unrelated, original IP, and directed Rare to turn it into Star Fox Adventures. History would later vindicate Rare’s original vision for the game (Star Fox Adventures, while a perfectly competent action-adventure game, had little to do with the Star Fox series proper) and show that even Miyamoto, the Walt Disney of video games, could make mistakes. 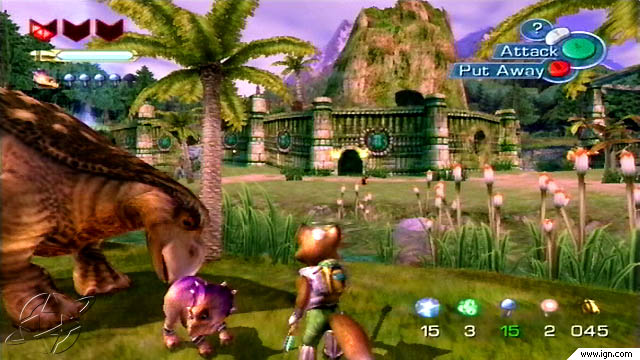 As I said before, Miyamoto has done so much more good for the industry than harm that it’s hard to count these mistakes against him. Still, the fact that Miyamoto can almost casually derail an entire series because he disagrees with the development team is concerning. For me personally, I would prefer that he had not derailed my favorite series, but in meantime I’ll suck it up and keep playing all of the other excellent games we have to thank him for.

I’m winding up here because I realize it’s a bit much to ask strangers to read 1500+ words about why a couple of games disappointed me, but I hope at the very least you learned something today. Maybe you’re a fellow Paper Mario fan who finally got some closure from reading this. This has been a lot of fun for me, at any rate. Seeya again next week-ish.