Pet ownership is fraught nowadays with ethical and practical problems. The favouring of apartment living over purchasing acres of land means the Dobermans and Great Danes of yesteryear no longer have a place in the average family home. Furthermore, rumours of owning a poorly behaved pooch can now spread around a social circle like wildfire, all thanks to social media.

There is also a need to stand out and not go for the run-of-the-mill French Bulldog or koi carp; demand for more exotic pets, such as snakes and bearded dragons, has surged in recent years. Legislation on the ownership of animals from more tropical climes has also been relaxed, and the upstanding gent is entrusted with keeping his more unorthodox creatures in line. So, why not be a true trendsetter and pluck for the newest of pets, the Crimson Head?

They say that the dog is man's best friend, but who can possibly identify with man better than a beast that was once man himself? The charms and unique abilities of the quirky Crimson Head makes him a smart addition to any avant garde household. If you remain unconvinced, read this list of reasons why you should visit your local breeder tout de suite.*

*This is a paid advertisement of the Spencer-Trevor Memorial Conglomerate (former trading name: Umbrella Corporation). The company hereby accepts no liability for personal injury or property damage as a result of purchasing a Crimson Head. Furthermore, it wishes to point out that the accusations of its prior domestic pet product, Cerberus, causing a contained outbreak of a plague-like virus were deemed defamatory by the Raccoon City District Court. 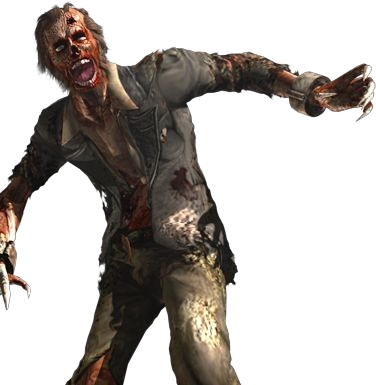 One major gripe of pet owners is that they have to waste precious leisure time on brushing the coat of their thick-coated pedigree dogs. When their pets are prone to shed during the summer, clumps can be found in every nook and cranny, making allergies unbearable. With the Crimson Head, this source of inconvenience and embarrassment is no more!

Each Crimson Head is selected to be naturally hypoallergenic and, provided you keep him in a cool, dry climate, will shed minimally. We advise using absorbent sheets in the Crimson Head's quarters, so that most of the pus and general ooze is removed while he is locked away. A few gallons of Febreeze is an absolute must in any civilised household regardless, so spraying your house hourly to remove the rotting stench of expanding bowel gases will be nothing more than a standard part of your daily routine.

Sick of your overbred pug refusing to get off the couch for a brisk walk? Find that your Siamese indulges in more packets of Kettle Chips than you do? The athletic alpha demands a powerful counterpart in his pet, and the Crimson Head leaps straight into that role.

The Crimson Head is bred with a killer instinct, which will most certainly inspire you to reach record times in your half marathon training. Feel like stopping for gelato? Getting thirsty? With the Crimson Head hot on your heels, stopping won't feel like an option. Because it really won't be an option.

A man's home is indeed his castle, but for most of us, our middling salaries don't permit the building of a moat. Instead, we have to make do with our trusty guard dogs. Unfortunately, bans on the ownership of breeds such as pit bulls, and the fact that breeds such as Rottweilers have become more cutesy in the eyes of the general public, frustrate our noble efforts to protect our property.

With a handy Crimson Head, would-be burglars will be dealt with mercilessly. One look at the distinctive markings of the CH should scare away any crowbar-wielding menace. If the intruder is still willing to roll the dice on getting to your valuables, chances are there won't be many scraps of him left in the morning for the maid to put in the garbage disposal, anyway.

After a hard day at work, there is nothing quite like opening the door to a beloved pet, especially one who is desperate to give you kisses and licks. We all need our ego stroked by the unconditional love of a dear domestic animal from time to time, and the Crimson Head certainly doesn't disappoint in this regard.

If a Crimson Head catches even a whiff of you, he will bound up to you, yearning for your heart. He may be confounded by the concept of doors, but in the same room, he will be unstoppable in his need to be close to you. Note: for the ownership of multiple Crimson Heads, we suggest keeping a cattle prod or some other sort of herding device on you at all times.

5. No insurance? No problem!

Pesky insurance companies love nothing more than pushing their products on overly anxious pet owners, tugging at the heartstrings of unsuspecting animal lovers. Most of us would rather blow the extra change rattling around in our purse on some sort of fancy gadget or antiques, rather than insurance premiums.

There is no need to worry with the faithful Crimson Head, since he is uninsurable in all 50 States. There is very little that veterinarians can do in the event of ill health or mishap, so insurance is completely pointless, anyway.

A disclaimer is needed here, though - you should check whether your liability insurance policy covers attacks on third parties by dangerous dogs in your care. Crimson Heads probably won't apply by way of analogy, anyway, but it's worth a shot, right?

By far the hardest part of being a pet owner is inevitably having to say goodbye. You may have never got over Pierre the goldfish being flushed down the toilet. Maybe as a child, you lived in fear of Brad the tortoise emerging in the night from his backyard grave. With the Crimson Head, saying goodbye is part of the deal when you buy him in the first place. A Crimson Head isn't for life, and we make no guarantees he will last until Christmas!

The Crimson Head can be a little mischievous, but is easily neutralised by a gas fire or by two shotgun barrels to the noggin. If your Crimson Head gets a little frisky, you can put him down with little fanfare, and your local dealer will work with you on an excellent deal to secure a quick replacement.

We advise replacement after a couple of months anyhow, since the Crimson Head's vital organs liquify rapidly and his limbs may start to detach themselves. In a way, this makes the Crimson Head the perfect dinner party conversation piece, since he is the first deliberately biodegradable pet! How en vogue!

Don't take our word for it - visit your local Crimson Head dealer and get to know their stock personally. All dealerships also stock neutralisation devices and fish gut feed, so all that you need to take care of your Crimson Head should be available under one roof. Use the coupon code TVIRUS10 for 10% off your first purchase!

And remember the slogan: don't be braindead, buy a Crimson Head!