What does a violent play style say about you?

As far back as releases such as Carmageddon and the original Grand Theft Auto game, the link between videogame violence and violent tendencies in real life has been heavily disputed. Figures like Jack Thompson have even brought cases to court, arguing that lurid depictions of sex and bloodshed are corrupting swathes of youth and were responsible for real-life attacks.

The vast majority of gamers reject the argument that violent games turn law-abiding citizens into a scheming psychopaths. I am indeed partial to a few shoot-outs and to totting up headshots, though I wouldn't say that shooters are my favourite games; I prefer platformers, thanks to the LittleBigPlanet series and classics such as Crash Bandicoot.

I extended my mild enjoyment of the shooty-bang-bang genre, weirdly enough, through buying a PS4 that came bundled with Watch Dogs 2 at the tail end of February.

For the uninitiated, Watch Dogs 2 does encourage you to use your hacking skills to infiltrate areas behind locked doors or in restricted areas, but you can fall back on garrotting security guards if you monumentally mess up your run and get detected. It's not advisable, and Marcus does not withstand damage as well as his counterparts in other open-world action games.

However, once you get the hang of gun wielding and can get to higher ground fast enough, being nifty with a firearm can help out greatly. 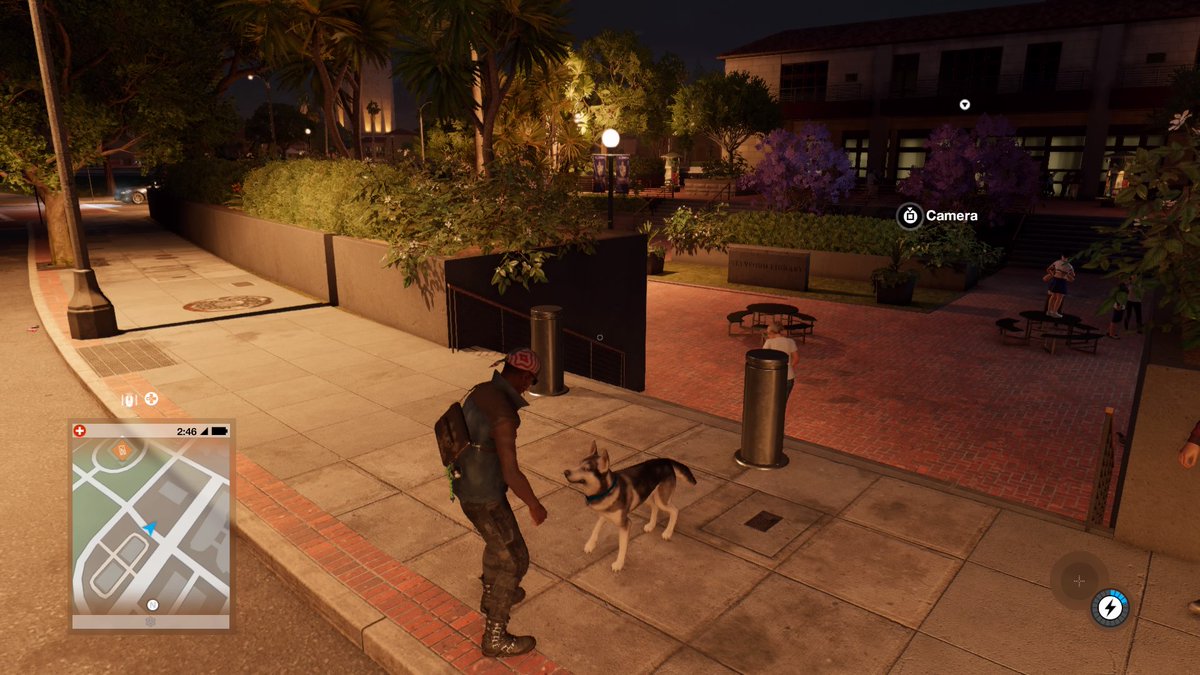 Petting the dogs in Watch Dogs 2 might not help as much, but it gets you a trophy and - well, why wouldn't you?

As a result, about 10 hours in and having sampled a fair amount of the side-quests, I noticed that I was relying on my handgun perhaps a little too much. Occasionally, I was forgoing stealth entirely in favour of the battering-ram approach. Bizarrely, I also noticed this as a trend when I tackled Chapter 13 of Final Fantasy XV - I tended to use my kingly spells rather than sneak past enemies, even though there were clear advantages to going the stealthier route.

Note to self: games that demand stealth are not completely joyless.

It made me question why people opt for a more violent route, when pacifist paths do exist. This can extend to a great number of games where stealth or avoidance is one option but by no means mandatory, including Undertale, the later entries to the Resident Evil series and a considerable amount of sandbox action games which offer up thousands of hapless pedestrians for our evil shenanigans. What are the reasons for players spilling blood needlessly?

To lead the stealth life, you have to be good at biding your time. An example of this is the licker sections in Resident Evil 5, a game I'm currently running through in local co-op mode; waiting for them to scuttle past you, then quietly darting along a corridor, can at least make sure the lickers far behind you before they start trying to turn you into a Chris kabob.

In some sections, you can even avoid them attacking completely. However, if time is money to you (and I'm not sure whether the BSAA pays on an hourly or per-project basis), then taking one down with a pump-action shotgun and dealing with the ensuing horde can seem a more palatable option.

If you have the AK-47 and a decent shotgun between Chris and Sheva, you can make light work of each group of lickers, though a few false moves will cost you a good chunk of health. The ammo and treasure drops are decent but probably not worth the amount of bullets effectively thrown away to enemies you could have simply run away from.

A theme that will come up again and again is that we know in the back of our minds that when we kill a character, we are changing code. We are not really ending the life of a person, who has talents, loved ones and aspirations. Thus, it feels (and, indeed, is) inconsequential to kill certain characters out of boredom. It seems even more justified to kill characters out of hatred or sheer annoyance.

While obviously bosses need to be killed (usually) to advance the game, I'm talking here about characters who do not have to die to advance the plot, but where the option is left open. A good example is Ben in Season 1 of the Walking Dead. Ben is not a Carver-esque character, but he does betray the group and shows dangerous naivety throughout the entire story.

As a result, I thought nothing of letting him fall to his grisly death during the belltower chase close to the end of the game, even though there is the option to save him. I did feel a twinge of guilt that the poor sod got munched on like a carpaccio starter at the bottom of the tower, but it was only a slight twinge (particularly since he practically begs you to end his life).

I could lie to myself and say that I let Ben go because he was a threat to the group. He revealed the group's location to bandits through acting out of his own self-interest, resulting in death, in-fighting and general misery. While I do strongly believe that Ben was a liability, deep down this wasn't why I "killed" him.

I signed his death warrant because he resembled Shaggy from Scooby-Doo's whinier younger brother and had barely any redeeming features in my playthrough. I had no room in my squad for irritating characters - not when I had to defend the messiah and my surrogate daughter - so when the opportunity to get rid of him arose, I took it without so much as a glance backwards.

To unwind, some people head down to the shooting range and unload a few clips. Some of us live in Europe and so have never even seen an unholstered, loaded gun, never mind pulled the trigger on one*. If you can't hold a pistol in real life, then doing some target practice in the virtual world can provide same amount of response-based stress relief.

I experienced this for myself when playing Fahrenheit/Indigo Prophecy on the PS2 a couple of months ago. There is a firing range level, and seeing the shots connect with the paper was oddly satisfying.

Playing pretty much any action game which is sophisticated enough to register when you shoot certain parts of an enemy's body has the same effect for me, since having to focus on aiming provides a distraction from whatever is troubling me, and seeing that my actions have a specific consequences leaves me sated. If a few NPCs have their limbs blown off in the process of me reaching a new state of zen, then so be it.

*Except for those of us who are posh enough to have a hunting license. Mmm, fresh dear meat! Feel free to leave your best venison recipes down in the comments.

Of course, the simplest solution is that some players pursue excessive violence because they enjoy seeing excessive violence. This view is even more compelling if punching the lights out of a poor NPC takes less effort than simply walking right past them.

I'm not suggesting that Destructoid Community is home to several Patrick Batemans (with less meticulous skincare routines). Being a psychopath/sociopath means being unable to empathise with others, rendering violence completely free of internal negative associations.

The Jack Thompsons of the world are laughable because the inability to empathise with a CGI human doesn't coincide with being unable to empathise with real flesh and blood. However, a lot of us derive enjoyment from role-playing, and part of that role-playing may involve destruction and hurting other virtual beings.

Whether this is a sign of a sadistic streak or not is open to discussion. It is even possible that those who act out these fantasies through videogames are actually the healthiest of us all, since they separate out the part of them that is tempted to lash out at others, isolating it to an arena where it is impossible to injure real people. Think of it as a hi-tech form of anger management, only with grenade launchers instead of punch bags.

Do you favour an aggressive or a peaceful play style? Are there any instances where you killed an important character, even though it wasn't necessary to advance the plot? Let me know in the comments down below!