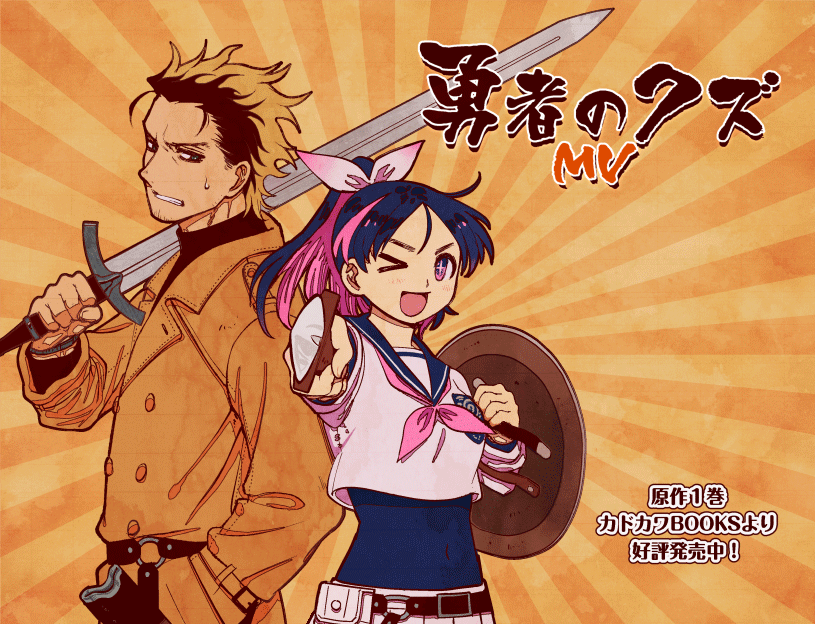 Japanese Visual novels are nearly impenetrable without the ability to read the language. They're essentially choose your own adventure books with music and heavily recycled 2D graphics, which often makes playing one as a foreigner feel fruitless. It's a lot of glazing over Japanese text while characters switch between one of a handful of frames overlayed on a static background. You can attempt to read the mood of the scene based off voice acting and what little visual information you can grasp, but likely you're missing most of the context.

Scum of the Brave isn't too different from the above scenario. If you aren't willing to test your observation skills, you'll likely come out feeling quite lost. Nevertheless, it does have some quirks that make it slightly more palatable to the foreign eye than your usual visual novel.

The game takes place in a modern day city with elements of Medieval architecture mixed in. In this world, a rag-tag group is attempting to rescue one of their members from a Dracula-esque figure, who controls a gang of armed street thugs. While the team is capable, and imbued with some sort of magical energy, they're inexperienced. They have to rely on a grumpy, and seemingly unwilling, mentor to achieve their goal. Or at least that's my best guess on what's going on. 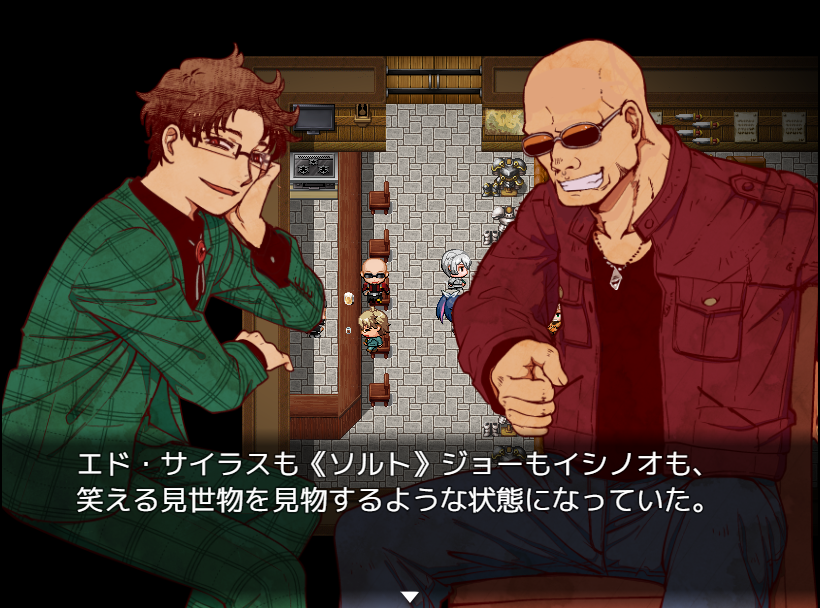 While the protagonist is a spunky girl with a gleam in her eye, the rest of the world and its inhabitants come off as menacing, grungy and shady. A significant portion of the story takes place in dark alleyways and a bar. Allies bleed an intimidating friendliness with piercing eyes and deceitful smirks that inherently make their intentions and trustworthiness questionable. Yet, their designs are still vibrant as the overall subdued palette make even the dim and dirty shades of colors they wear pop.

Unlike most visual novels, Scum of the Brave goes beyond simply displaying character portraits and cut away images. It's built with RPG Maker – a fairly common tool that, while designed to do as its name implies, has been stretched beyond the limitations of the genre time and time again. 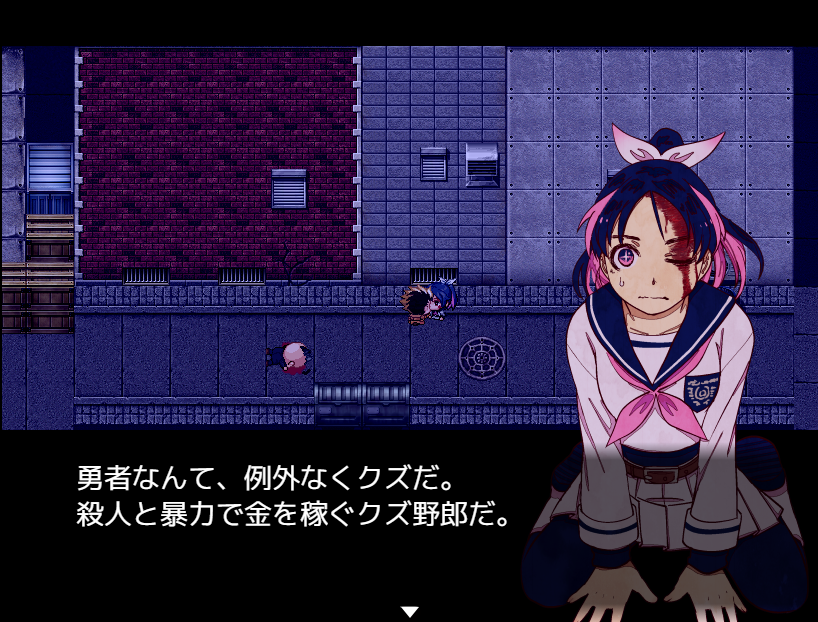 Large portraits give definition to some of the more significant moments, emotions and reactions, but small background character sprites animate about and play out movements that are too complicated or insignificant for detailed art. It's essentially replacing what would normally be text descriptions of these actions. They won't necessarily help you understand the plot, though it does make it easier to follow each scene.

While there's plenty of other action-oriented visual novels, these smaller animations – in combination with exaggerated expressions, a condensed plot and fast paced storytelling – makes it satisfying to follow along with.

Occasionally the game will give the player control. Despite there being a menu interface for status, equipment and items, there's no substance behind it. These sections seemingly only serve the purpose of walking to the next cutscene. As with many visual novels, the player is tasked with making decisions. However, as far as I can tell, each choice seems to have little to no outcome on the ending. 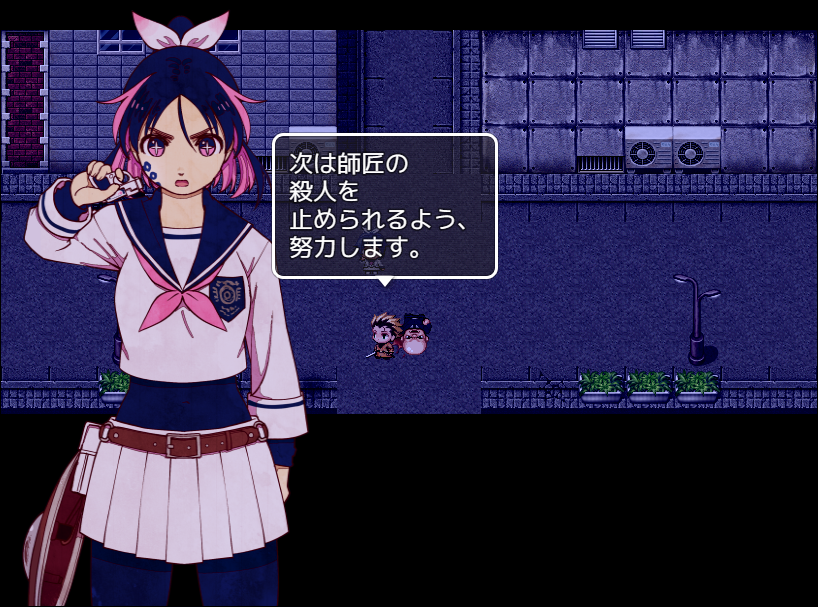 You're still not going to get the full picture from just the visual elements. At only an hour long though, it's not much of an investment to sit down and take in what you can. The design and expressiveness of the characters, as well as the additional visual elements from the genre's norm, really helped drive me to the end.

Scum of the Brave is free, so there's really nothing to lose other than time. Are there better ways to spend an hour? Probably. However, it's a fun curiosity. The game is found on NicoVideo.

Kind of a weird and funny story I had with Scum of the Brave. This picture of pizza shows up throughout the game: 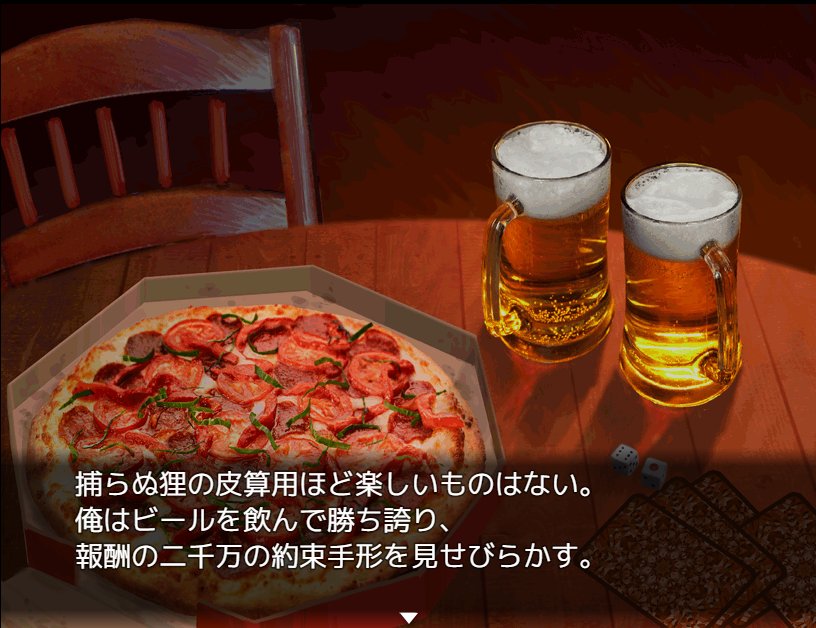 It looks PRETTY good, so I bought a pizza from Pizza Hut. I was tweeting about the game and mentioned this. The game's artist... and maybe sole developer? I'm not really sure... took notice, archived and translated my tweets into Japanese on some site called Togetter with the google translated headline, ​”Contribute to sales of game version "Kuzu no Brigade", American Pizza Hut.” The post probably got more views than my last five years of writing combined, but it was a funny little situation.