Artist of the Week: Handsome Boy Modeling School. Oh my God, they're gorgeous.

At start of the new millennium two dapper gentlemen, Nathaniel Merriweather and Chest Rockwell, felt it was time that someone brought class to the hip hop community and if no one else was going to do it, well why not them?

Handsome Boy Modeling School was an experimental collaboration between hip hop producers "Dan The Automator" Nakamura and Prince Paul. Formed in 1999 the two created the upper class and vain characters for a concept album titled "So... How's Your Girl?" which, along with the name of the group, draws heavily from one episode of comedian Chris Elliotts's cult sitcom "Get a Life" in which his character enrolls in a male modeling class.

The album features a lot of guest artists such as frequent Nakamura collaborator Del The Funkee Homosapian, Sean Lennon, and others. Comedian Dan Novello    appeared as his famous character "Father Guido Sarducci" performing sort of commercial for the album as the final track.

The album was highly praised for it's experimentation, creativity, humor, and production quality.

In 2001 Nakamura released a solo record under the Nathaniel Merriweather nom de plum titled "Loveage: Music to Make Love to Your Old Lady by," a title referencing one of his earliest works "Music to Be Murdered By" which was also a reference to "Alfred Hitchcock Presents: Music to Be Murdered By." Nakamura's album features many references to Hitchcock, including song titles that are the same as Hitchcock Films, such as "To Catch a Thief."

In 2004 Prince Paul and Dan reunited as Handsome Boy to release the album "White People." Father Guido Sarducci returns to perform the intro and outro to the album. White People also features Tim Meadows at the end of some songs in his character as his SNL creation "The Ladies Man." While White People got positive reviews it was not widely critically praised the way "So... How's Your Girl?" was. I agree with the critics, the first album is much better though White People certainly has it's high points, especially the opening track.

Citing business reasons the group broke up in 2006. In an interview with Pitchfork Prince Paul made this statement:

""We were having some internal conflicts, I guess it is major. It was major enough for me to retire, hang up my moustache and suit. It's done, that's it. It was business things. Things that needed to be addressed weren't addressed." "When I announced my retirement, that was it. He didn't call me, his manager didn't call me, the Handsome Boy manager didn't call. Either they hate my guts, or it just didn't work out."

It seems like that was the end of the band.

Just a few days ago Canadian artist Drake released the album "More Life." I don't really follow Drake and when I saw a small picture of the album cover, which does not feature his name, I very briefly thought that it was Prince Paul returning as Chest Rockwell as Drake is pretty much copying the Rockwell look down to his pipe.

Well, after quickly realizing my mistake I was quite disappointed. I mentioned as much here on Destructoid. I even vented my sadness to the two of them on twitter, not expecting them to even see it. Well, how wrong I was. 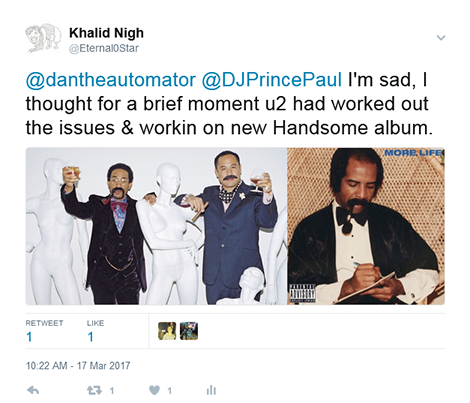 And then I was very surprised to get this response. 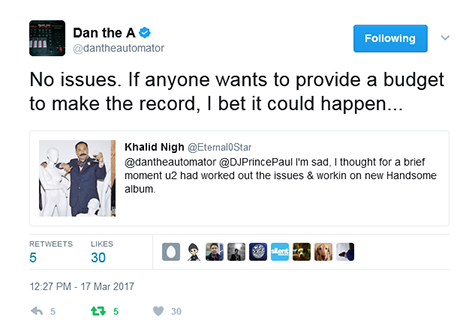 It's a long shot, but maybe we'll see the Handsome Boy Modeling School open for business again, I've got my $60 already lined up.

Edit: I made a music video! The video "Look at This Face (Oh My God, They're Gorgeous)" was made by someone who never posted another video. Modeling Sucks is kind of the companion song to that one as it's entirely based on samples from the episode except it's after things have fallen apart and has a similar sort of backing beat. Well, there was no video for Modeling Sucks so I figured I'd make one using the same concept the other guy used.