If you were ever wondering "why should I come to the middle of nowhere, America", I have an answer for you, and it isn't just blatantly racist senators, or college football!  Apparently we have a grand tradition of hosting an arcade auction every 6 months! 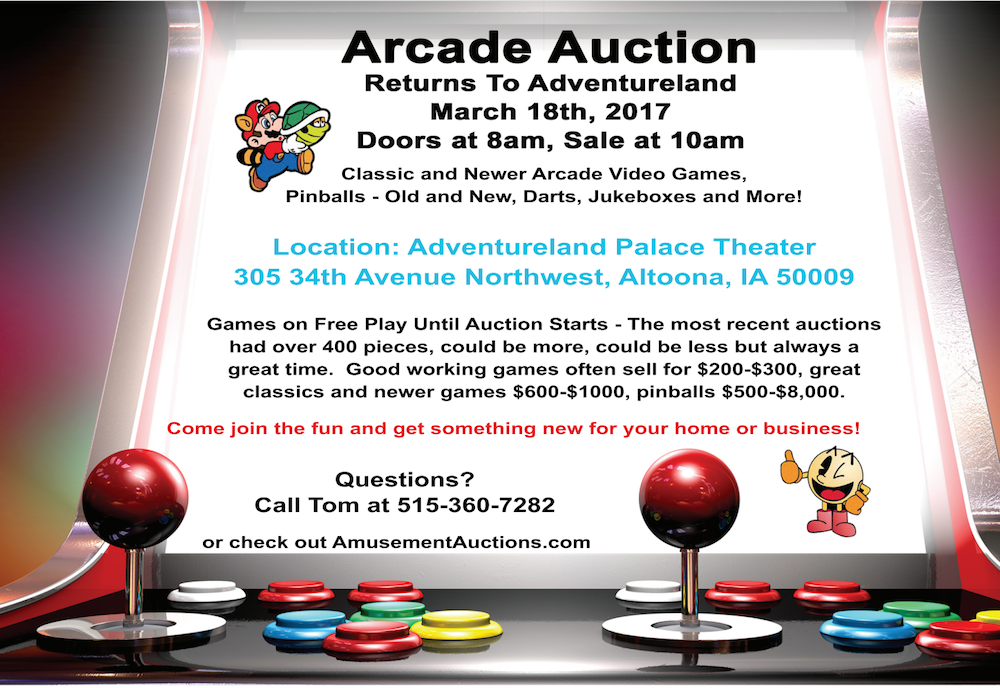 So I decided to go with my friend to scope out the place (all of the machines are on at the start, so its basically going to a free play arcade at the cost of 'oh god I'm in the midwest' - just kidding, I love it out here).  So here is the collection of photos I took of this year's auction, along with some commentary. 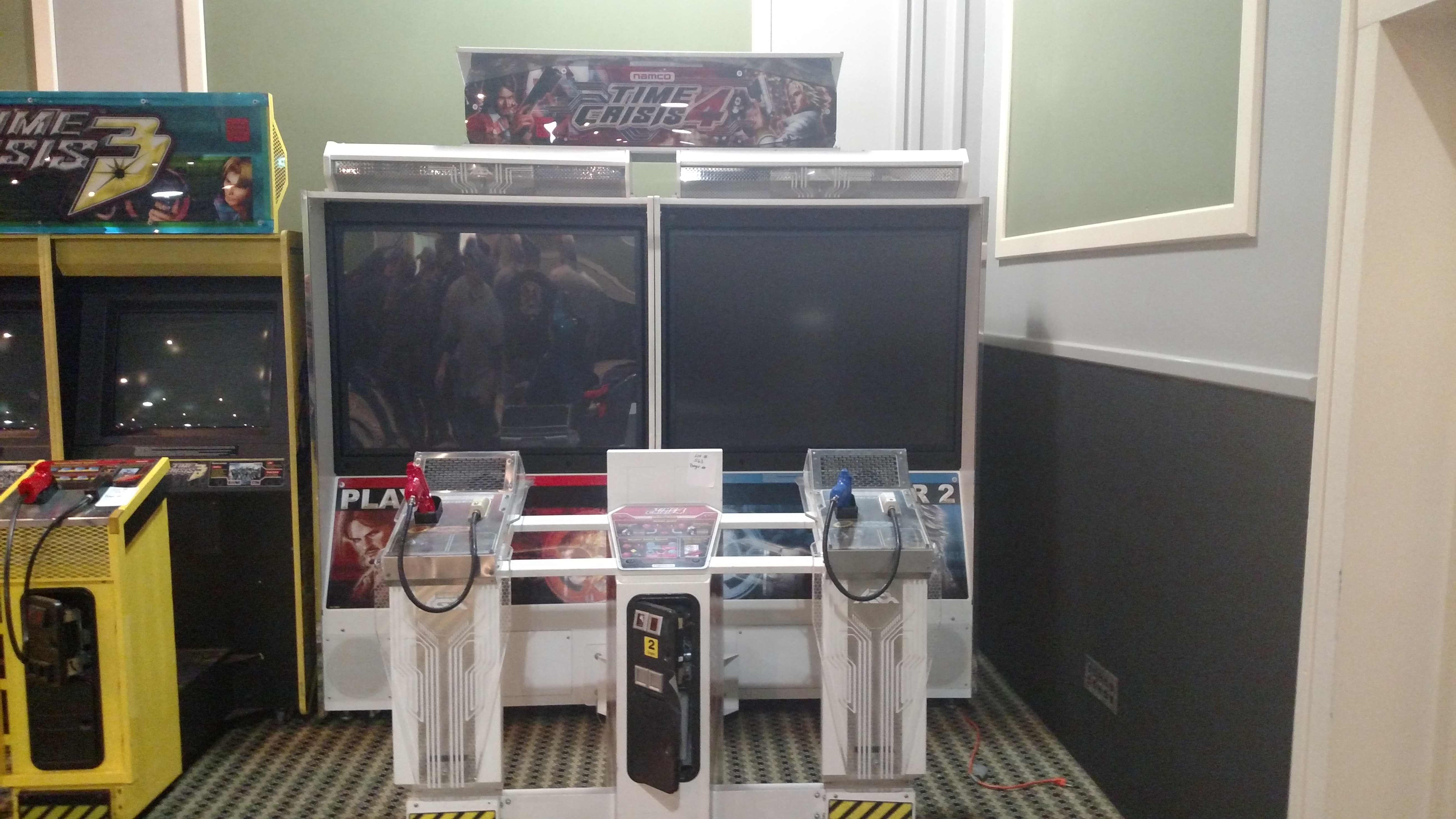 This bad boy is what greeted me when I first walked in.  Thing is enormous!  After getting my cabinet in two years ago, I can't even imagine moving this bad boy!  It would have to be taken apart in 4 pieces, and the two screens are huge! 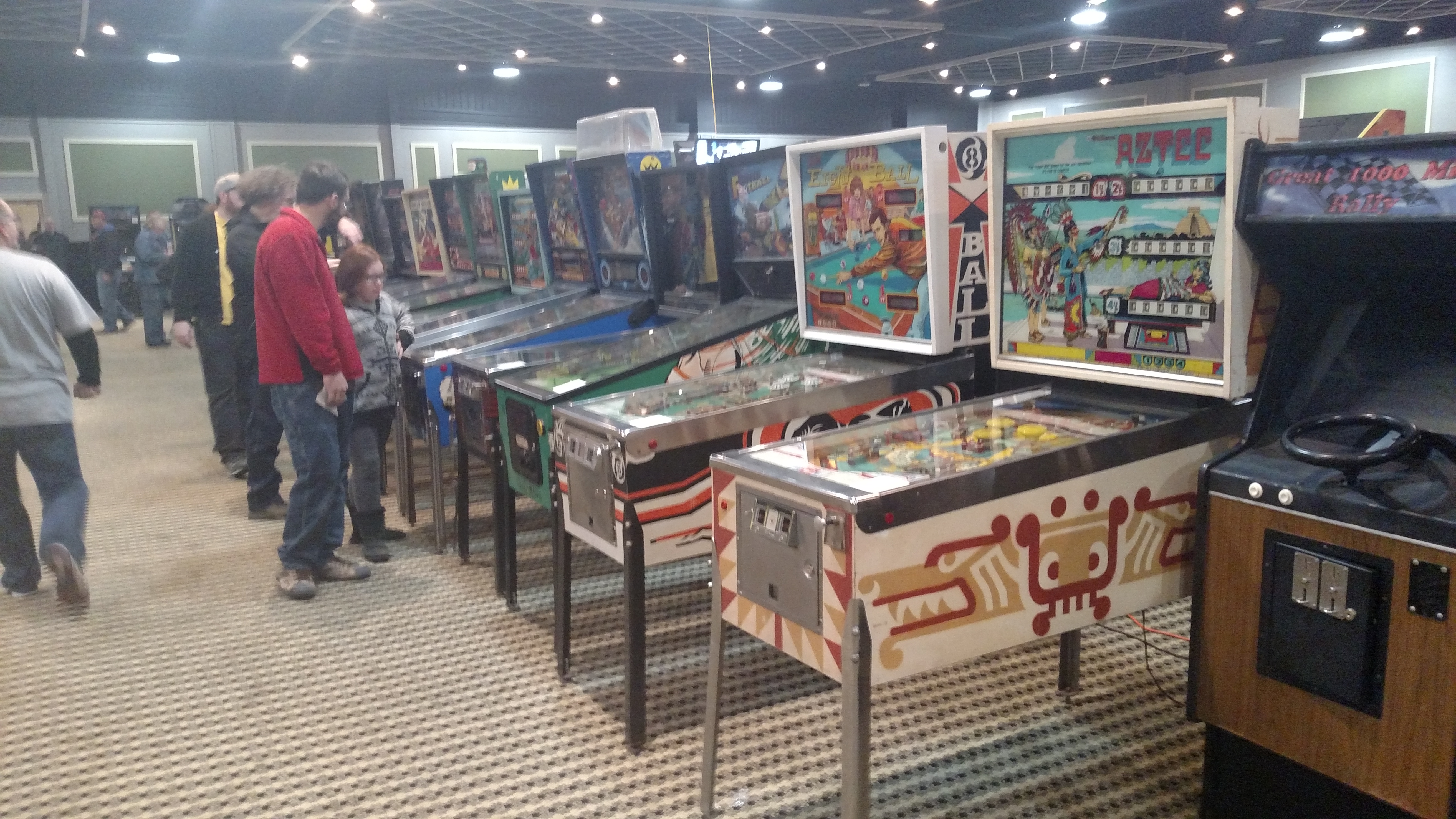 Right across from the Time Crisis corner, was pinball alley.  A lot of these were in varying condition - the glass not available on the top, flippers not flipping, but some of them were in tip top shape.  They had one that was a Demolition Man pinball machine that is pretty sweet to play.  I didn't grab a good picture of it, but it has two guns that you can use as the flippers on top of the machine, and it was in pristine condition.  Last time it was here, it sold for 1800 or so, which didn't meet the reserve.  Very cool machine. 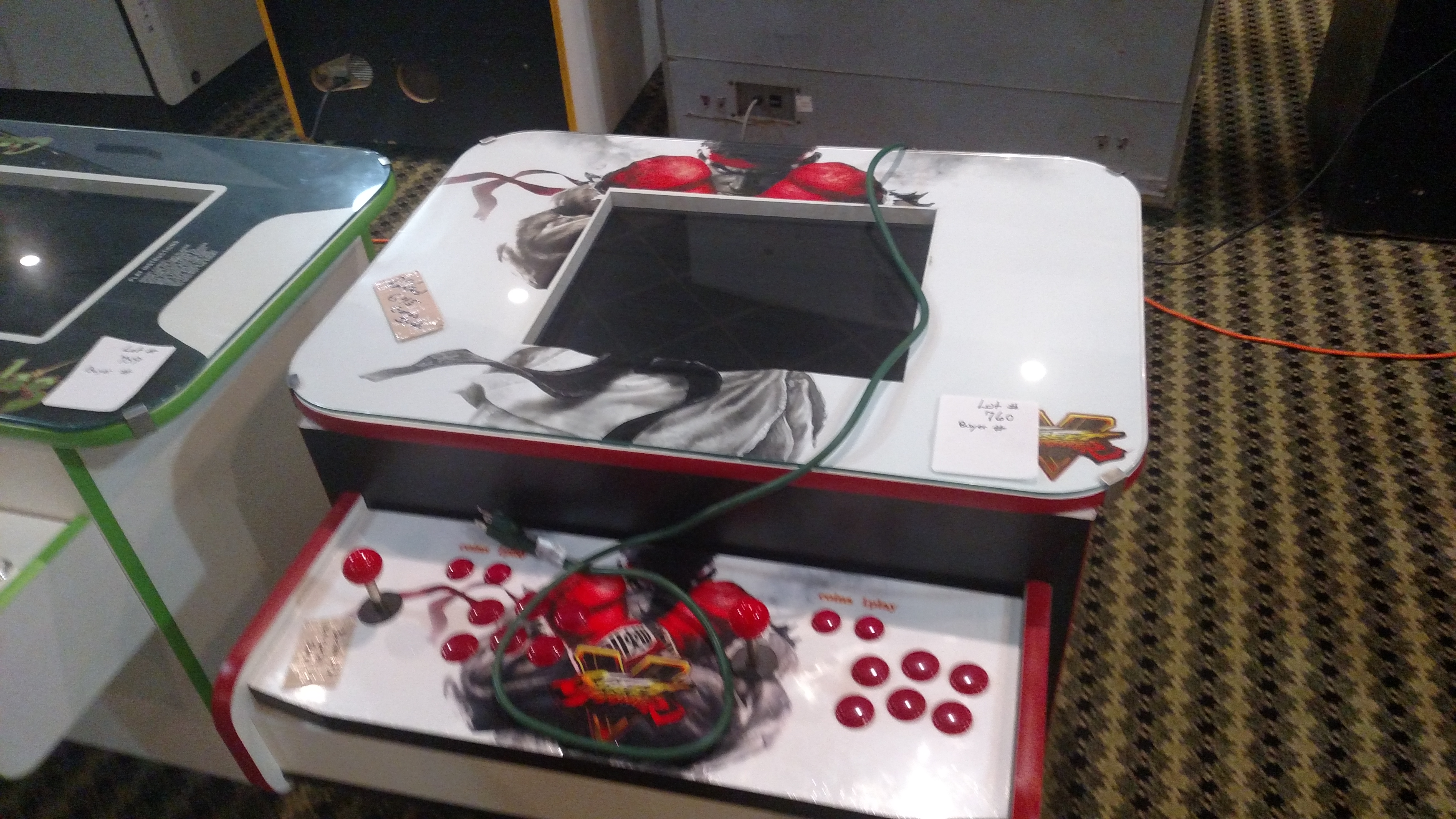 Typically they have a bunch of stuff at the start that are cocktail table cabinets or bar top games.  This year a bunch of people had made their own, which was pretty cool.  A lot of shiny new buttons.  My friend picked up a 4 player cabinet, but I was looking at this bad boy.  The picture is a bit blurry, but it looked really crisp, although some of the wood could have been aligned better.  These were going for 800+, depending on condition and games included.  Still, pretty awesome. 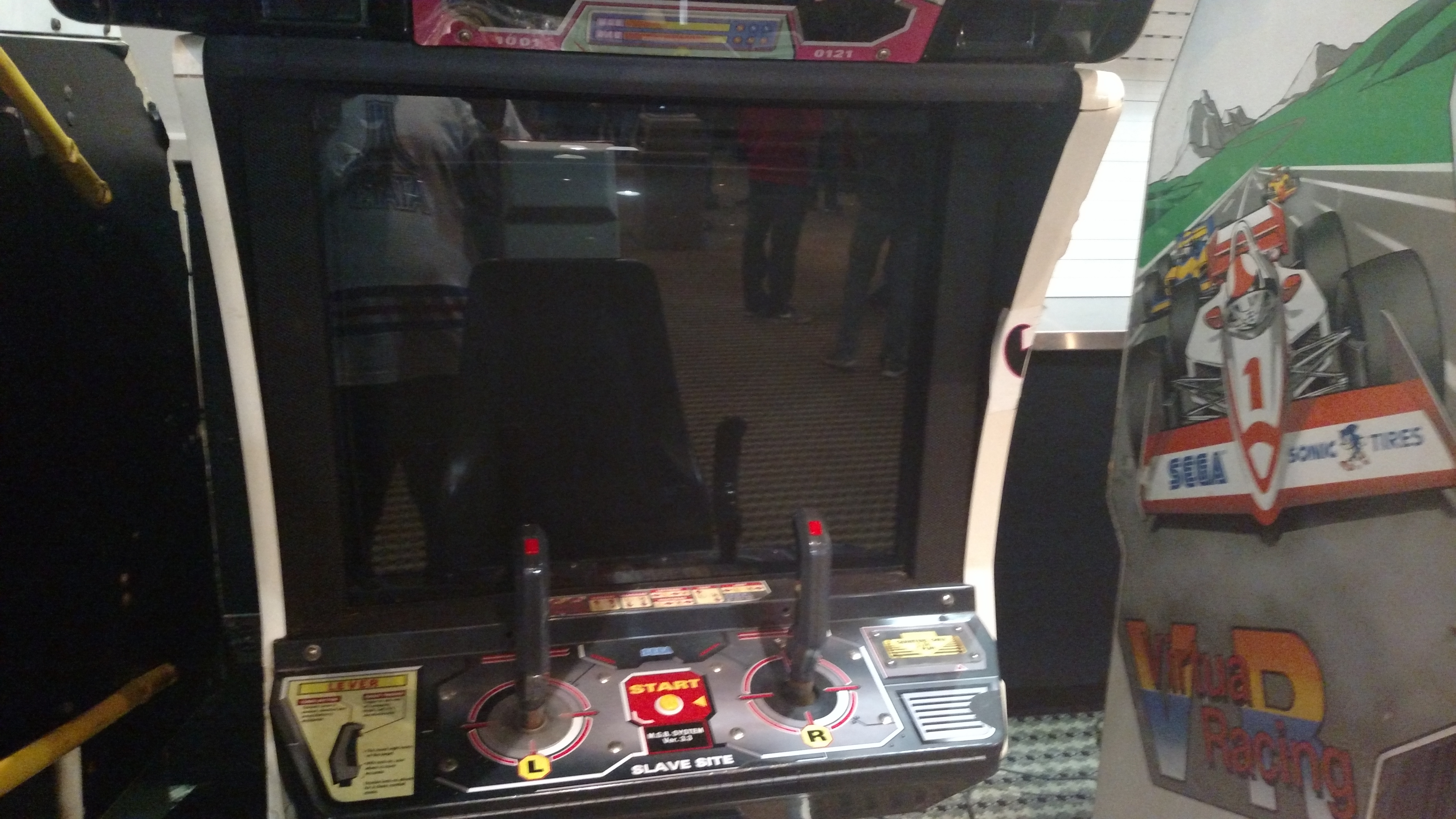 When I was about 12 or 13, my brother and sister did really well in the National History Fair.   This led us to some college in Maryland who hosted the main event, where we discovered an arcade!  We found this really sweet robot fighting game that used two sticks and triggers to control.  Years later, I learned that the game was called Virtual On, and seeing the two cabinets at the auction brought back a wave of nostalgia.  Also, thats me in the sweet, reflected Atari jersey.  It has been a good luck charm for years now.  Funny story about it from the first time I went, too - we weren't sure exactly where the auction was.  It is held at an amusement park, and in the off season, so my friend and I figured it must be at the hotel.  We parked our car, and wandered inside where we found a bunch of lanky nerds in fedoras with beards.  Has to be the place, right?  Then middle aged women came up to us, each with a tall boy of Coors in a beer coozy.  Keep in mind that this is at 9 in the morning.  They flag us down and ask if we're here for ..."virgin fest".  We look at each other, shrug, and say 'maybe?'.  One of them notices my jersey, and starts trying to buy it off of me.  I probably wouldn't sell it for anything, because I have had it for a decade.  I bought it with money I got for making the honor roll from Suncoast.  There is a lot of nostalgia in that sentence alone.  So they start trying to trade their Iowa State hoodies, which I couldn't care less about.  After wrapping up our conversation, we ask the hotel clerk if this is where the auction is.  And it turns out, there was a Yu Gi Oh tournament that day at the hotel, and the auction was in the actual park.  So we said later to those nerds and virgins to head down to where the real fun was at.  It actually is a much different crowd at the auction, with a lot of families, and a couple of people who are more the 'investor' type.  Speaking of the people, the crowds can be rather large: 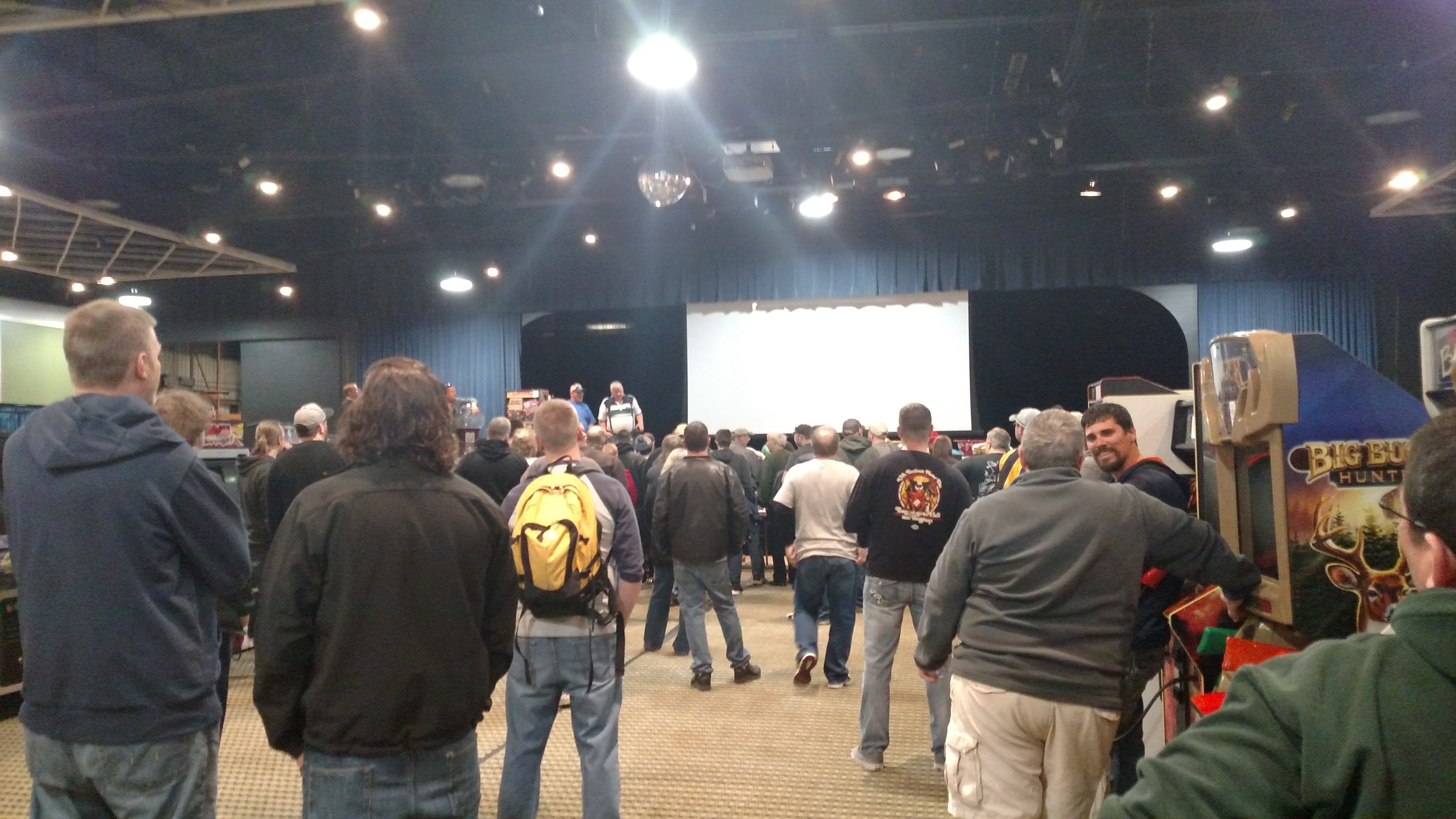 The best part though?  Definitely the guy with the huge stogie: 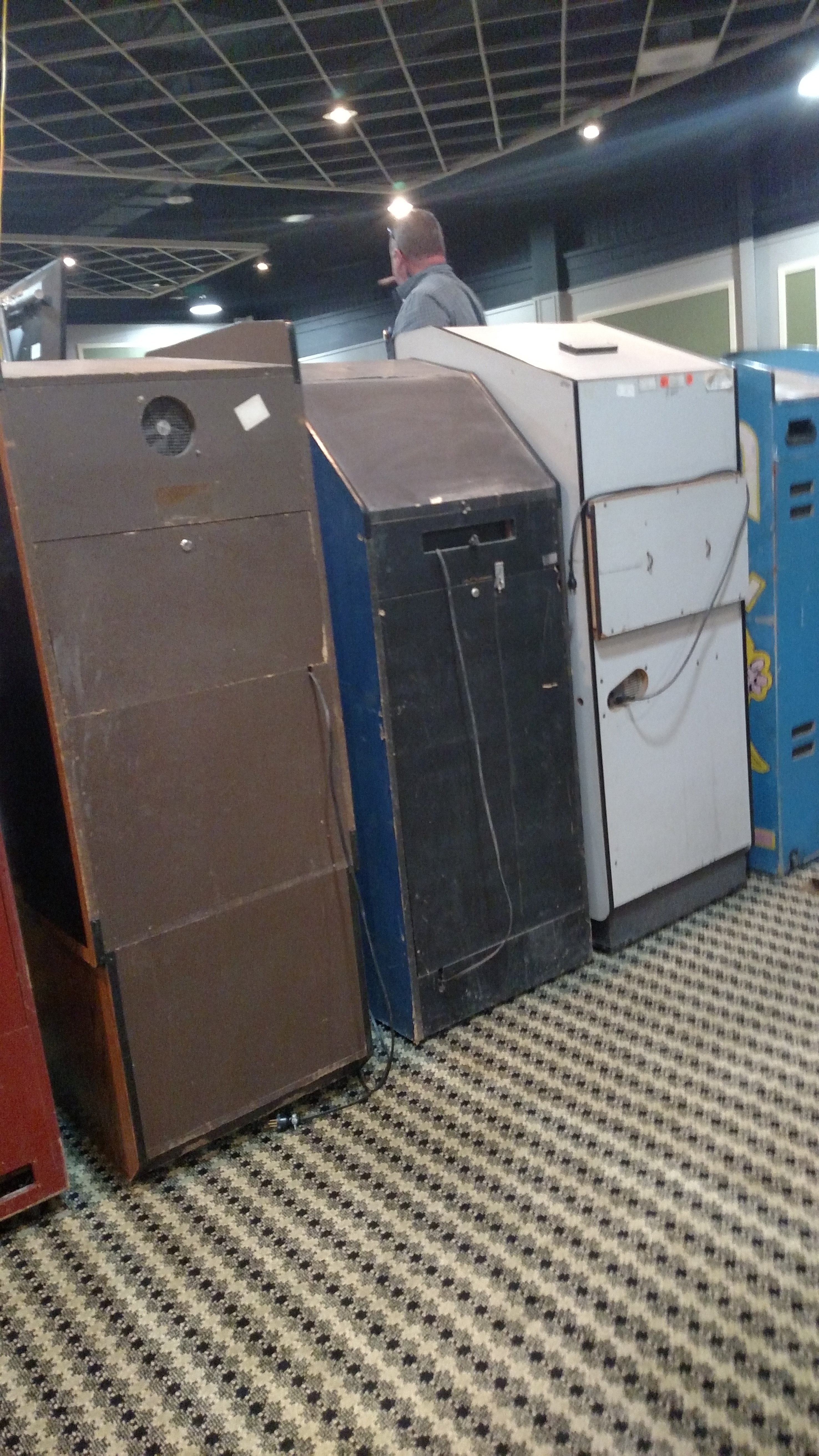 And they say you can't get a good cigar for three dollars...Back to the machines! 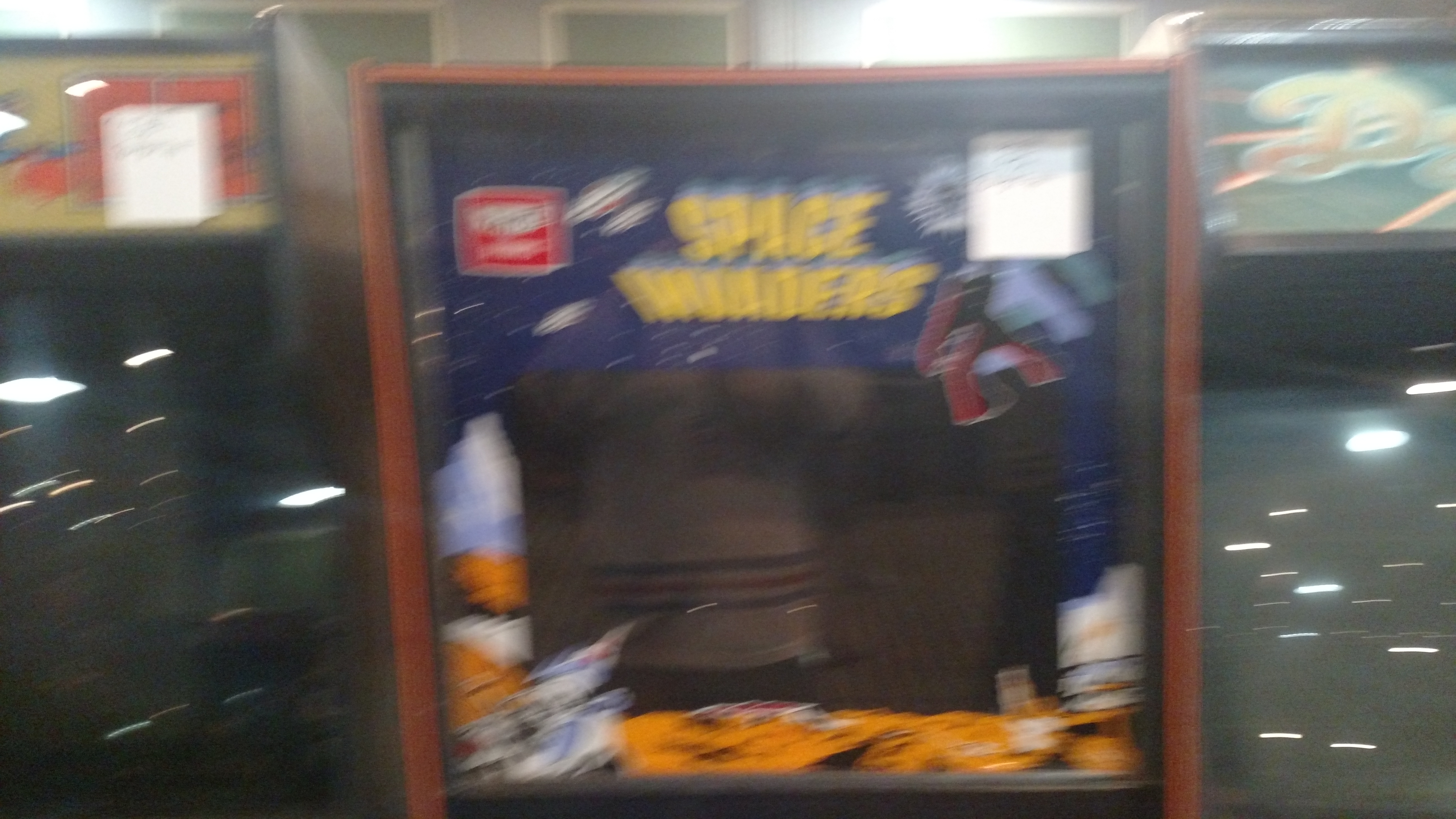 Worst picture of a cabinet?  Yeah, probably.  But its Space Invaders.  You must have seen this cabinet by now.  But the cool part were the instructions: 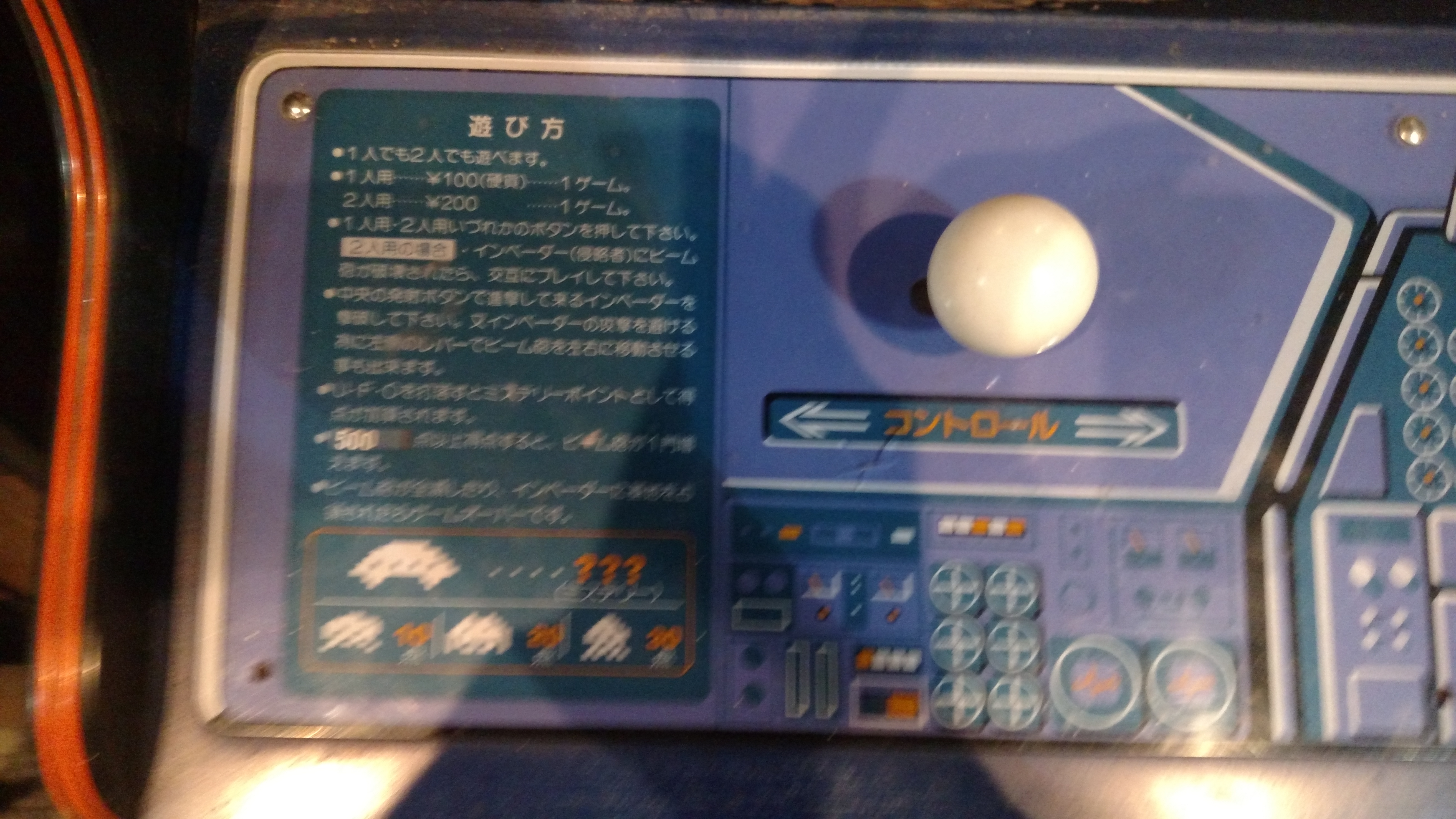 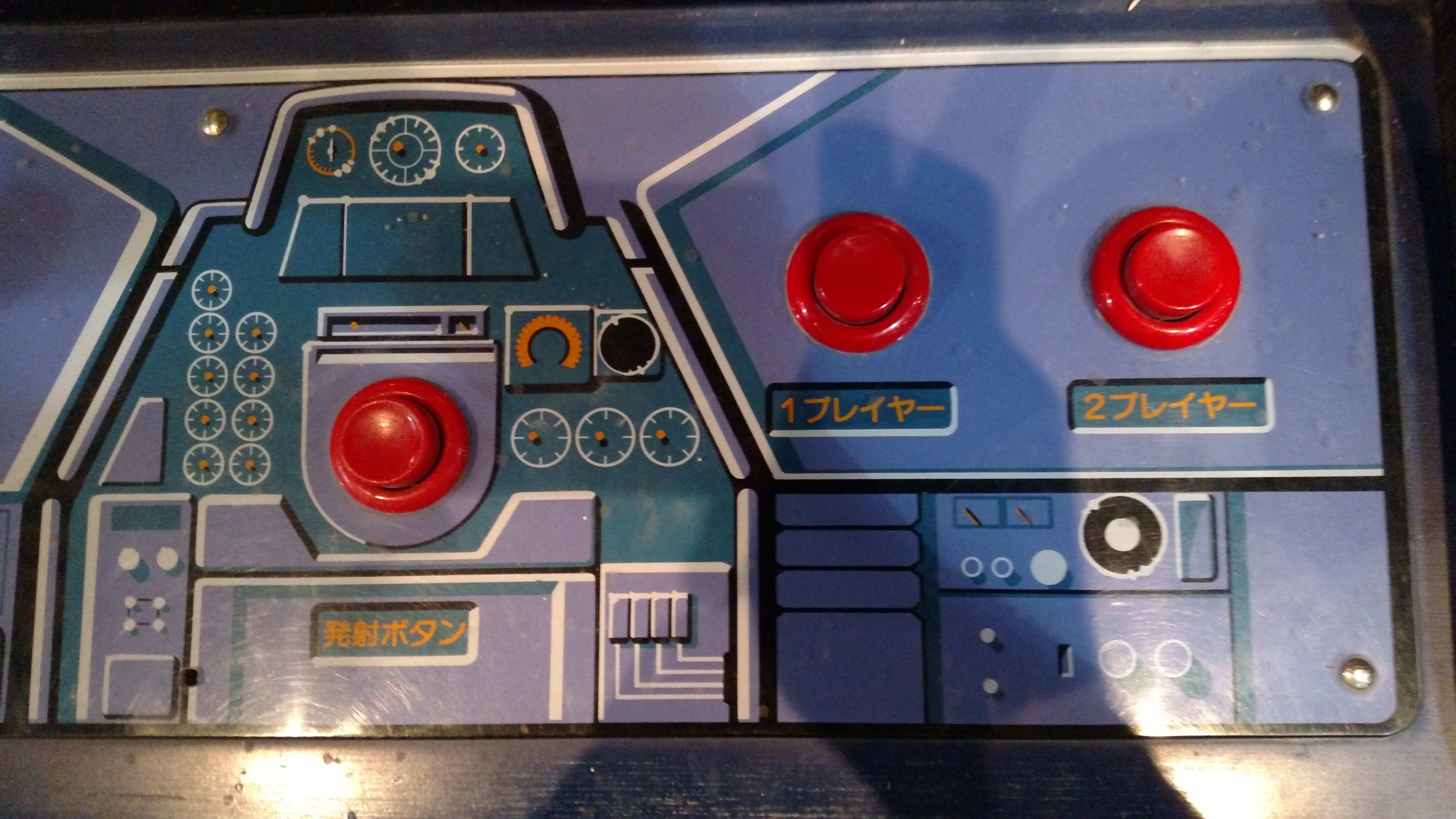 Bad. Ass.  It went for somewhere around 500, if I recall correctly, which is about 450 more than I would every pay to play Space Invaders again, but still, a really cool cabinet. 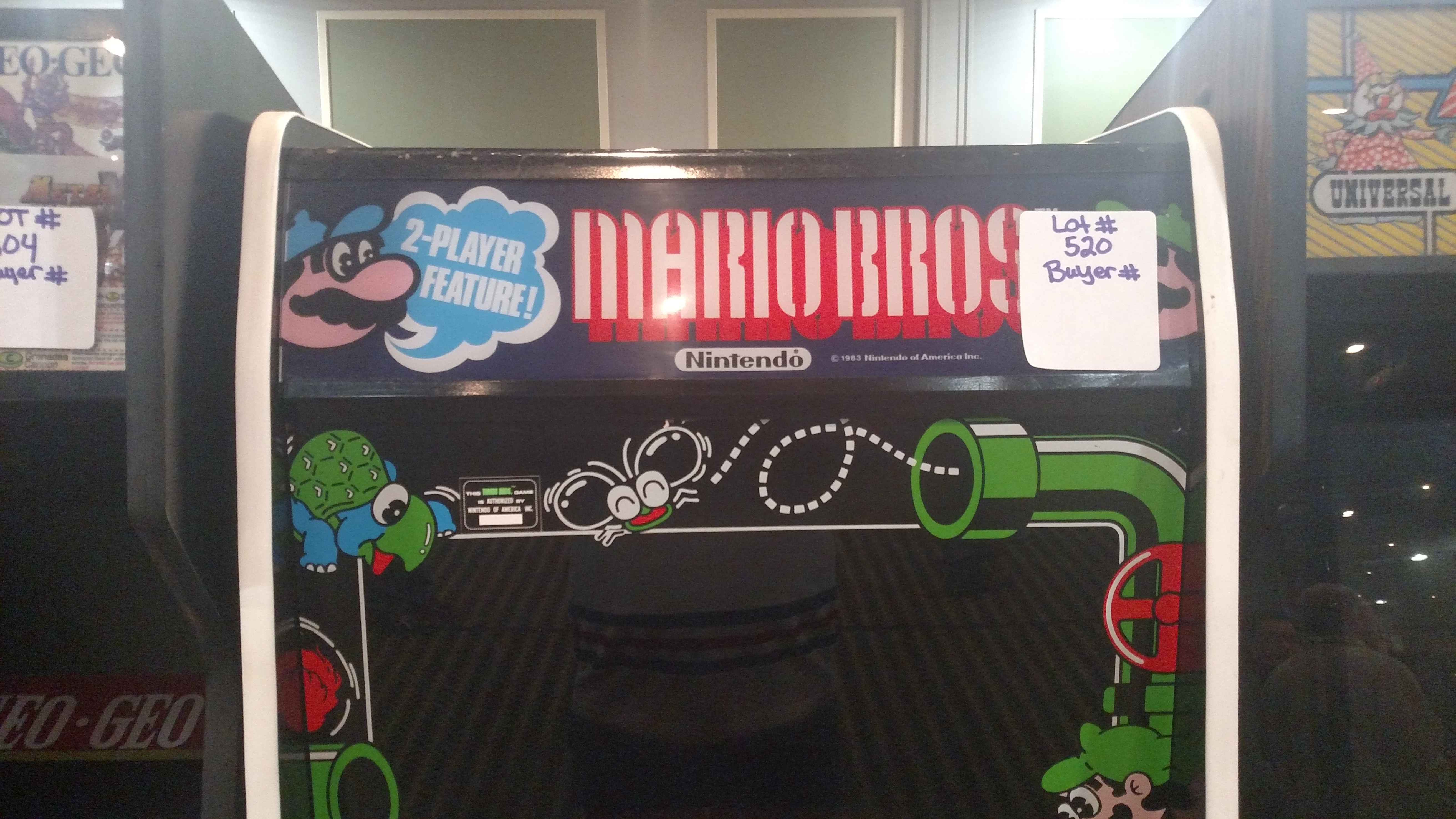 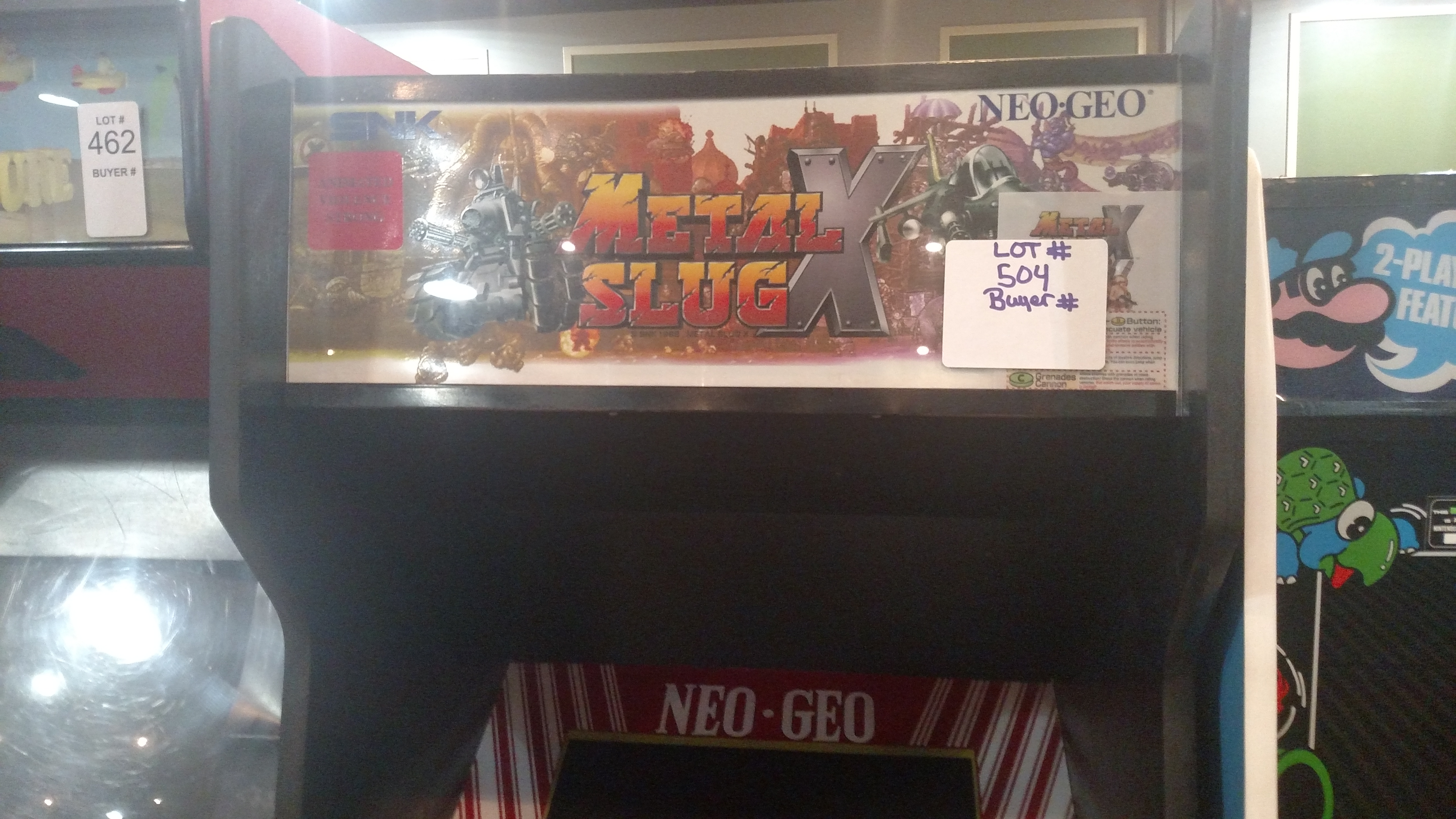 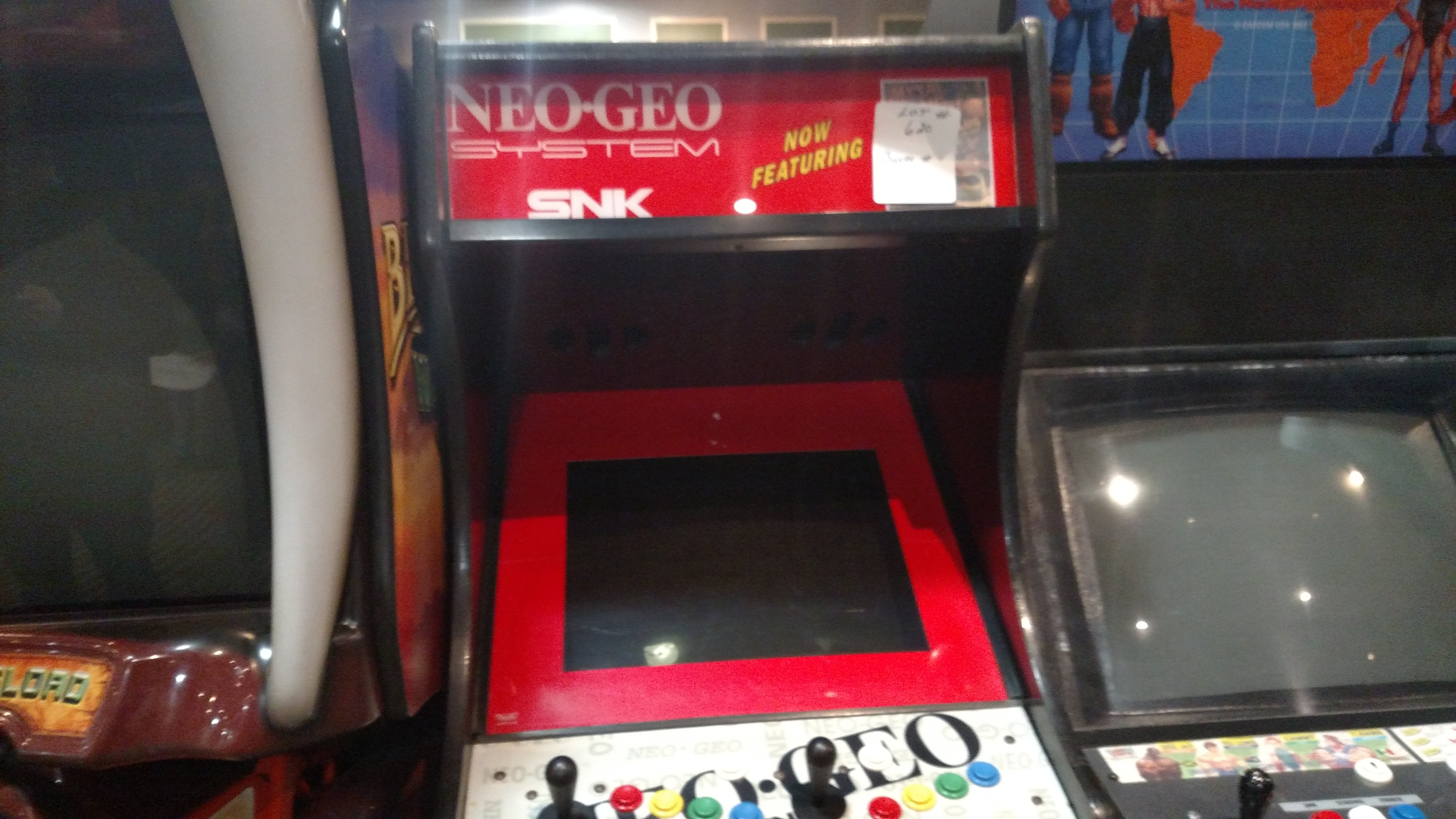 Some Neo Geo love.  All of the machines had their keys available and slots open, so you could peer inside.  For those of you who don't know, Neo Geos are actually cartridge based, so if you buy the cabinet, you can swap out for other games.  I was considering picking up the second cabinet, because I love the iconic look - you can tell that thing is a Neo Geo from super far away.  But also, I could order Wind Jammers for another 200 or so to have that on demand.  Metal Slug X went for around 600 (the cartridge alone was worth about 200 from some ebay research), and I didn't wait around for the 2nd one to go up for auction, as the day was plenty long, and I had to help my friend load in his (unpictured) Tekken 5 cabinet. 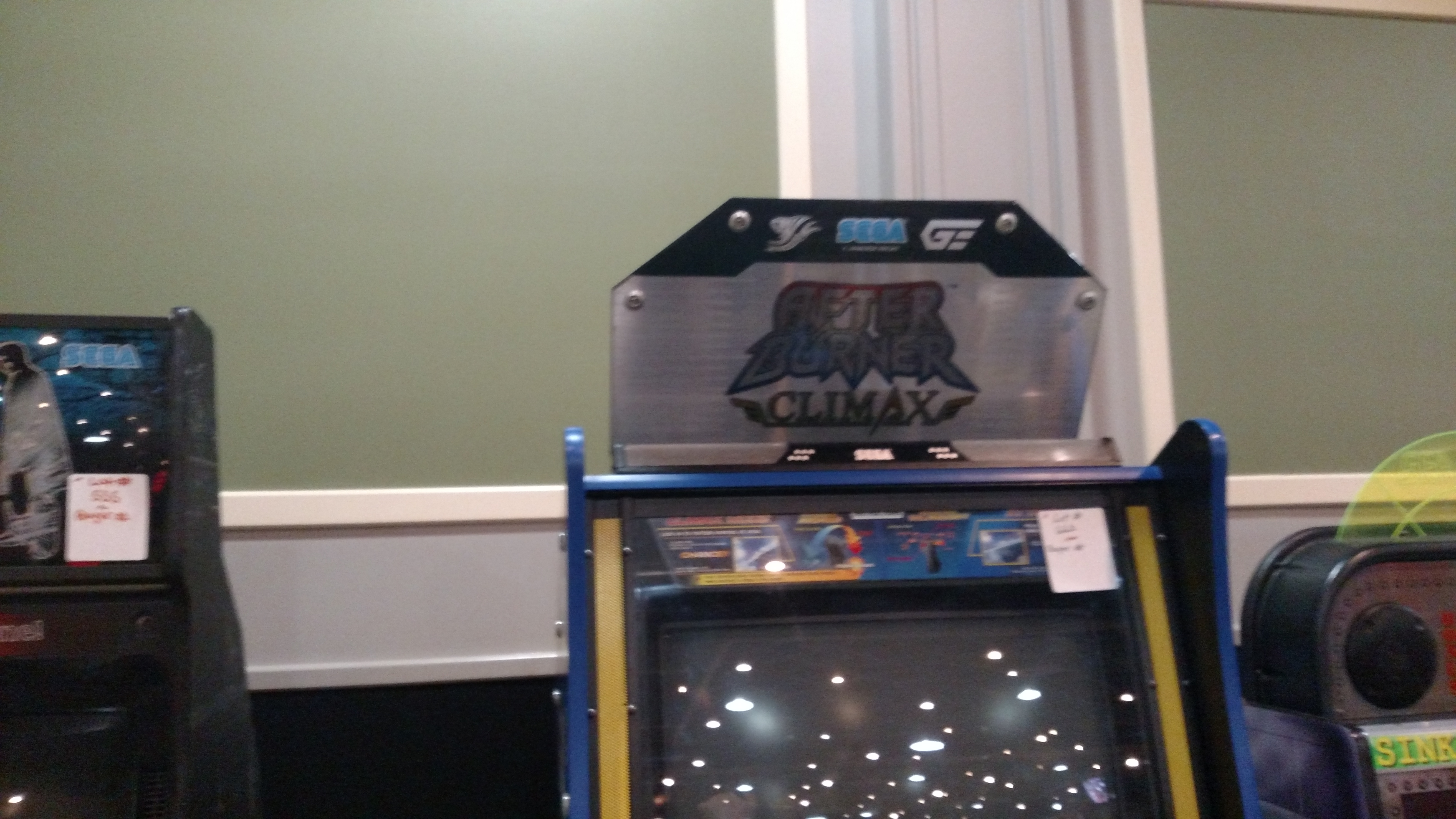 I just took this because of Bayonetta.  Really. 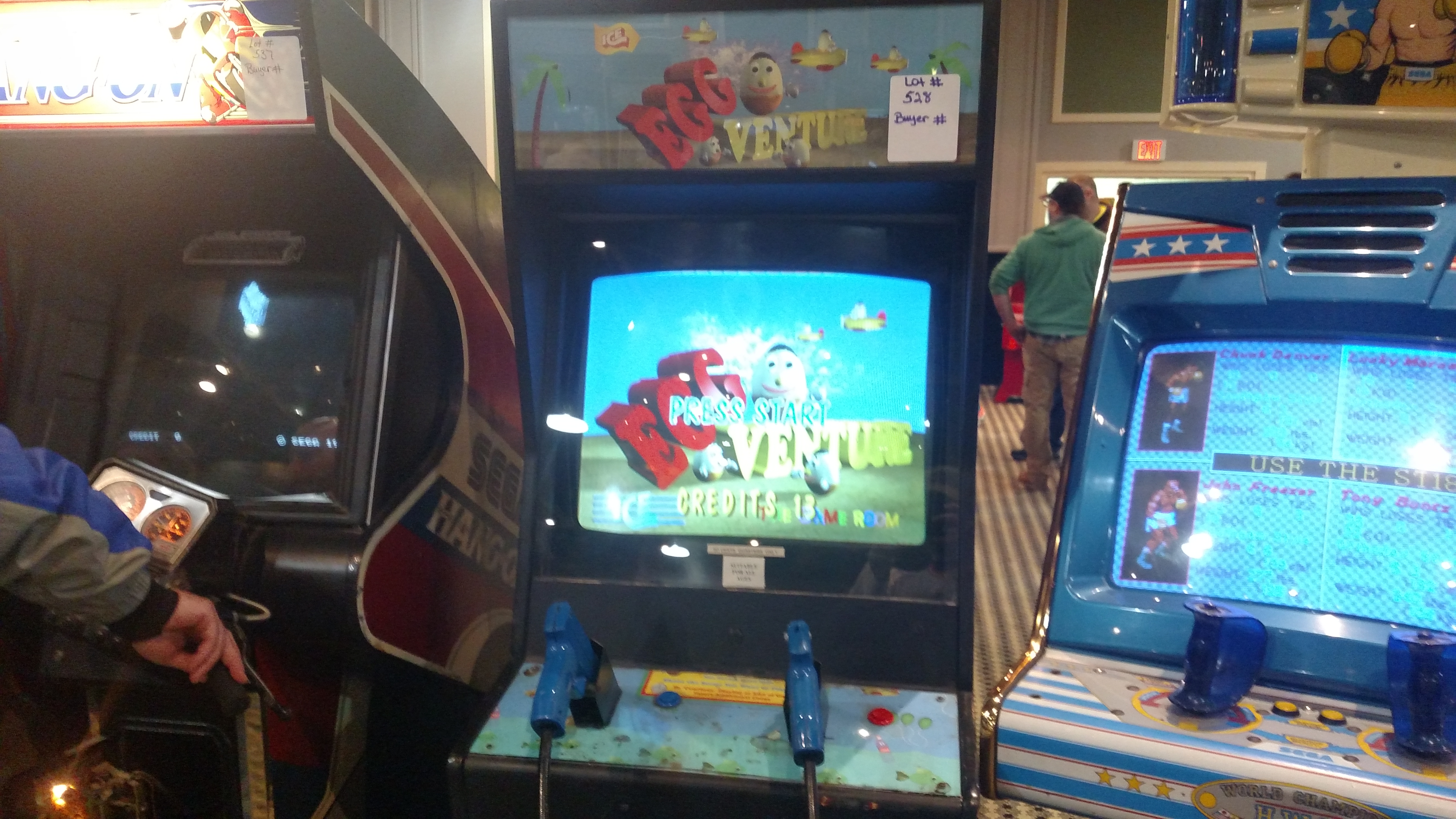 Rated E for everyone, Egg Venture!  How do you play?  Here's your gun.  lolwut? 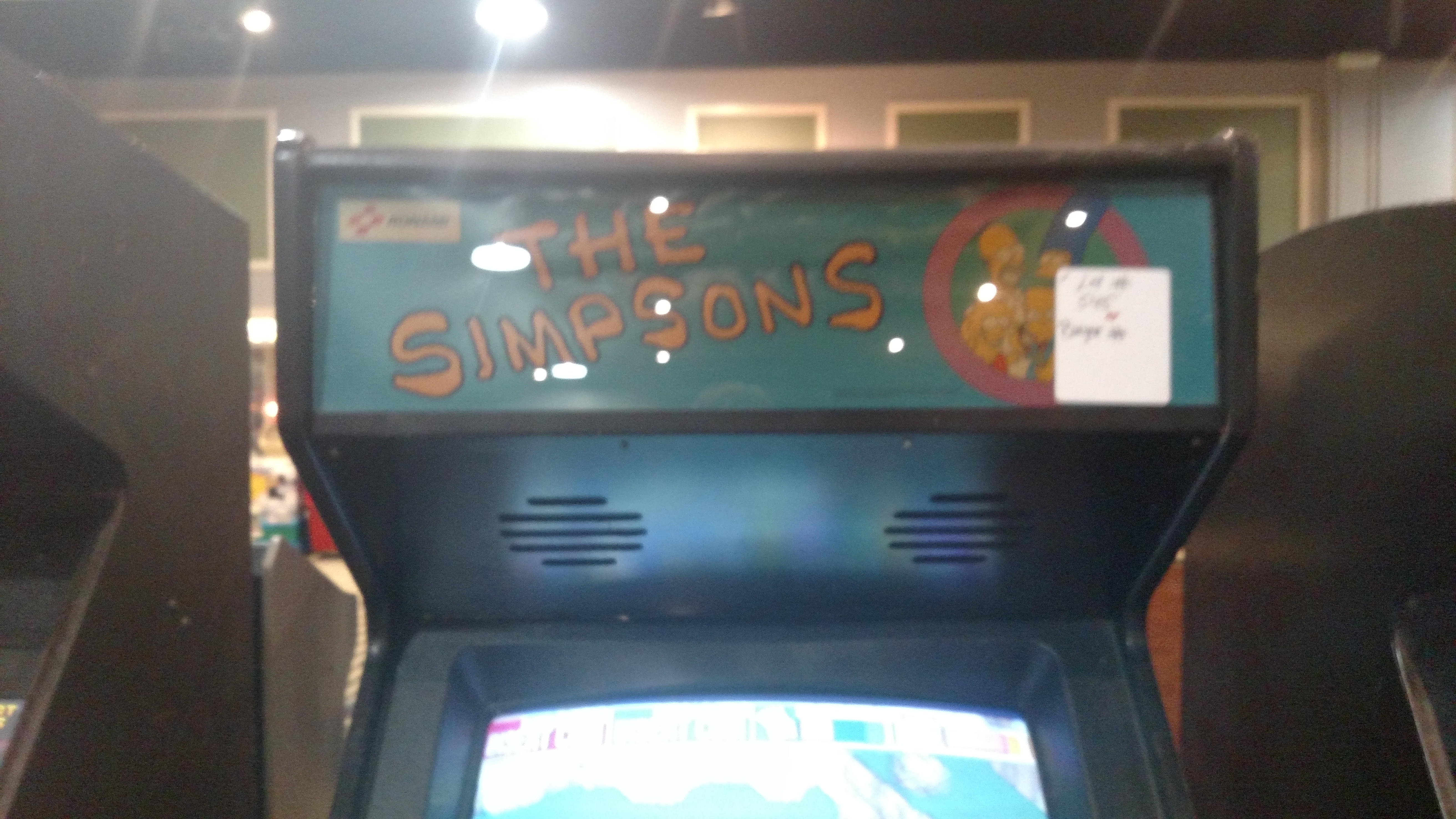 Another classic that was in tip top shape.  We discussed if it would be worth it to buy a token taker like this guy, and it didn't seem worth the 1 grand that it went for.  It felt like you would have to make a limit of how many credits you could pump in, or own a modern day arcade to make it a reasonable purchase.  Don't get me wrong, I love the game to death, but I can buy it on virtual consoles now, so I don't need the physical machine dedicated to it. 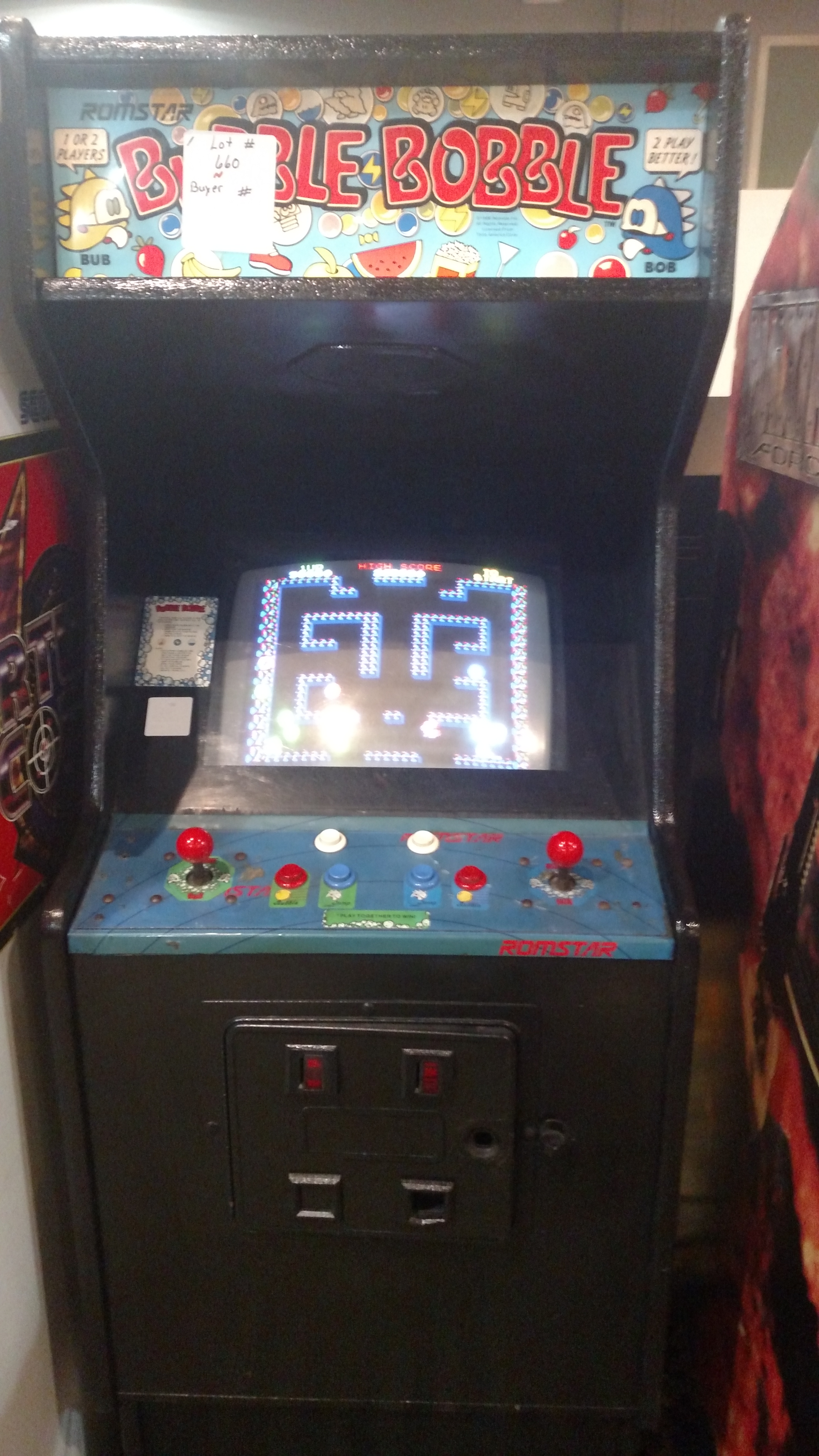 I said I wouldn't cry...I love this game.  If I had to do a top five games, this would definitely make the list (NieR, Deadly Premonitions, Link to the Past, Bubble Bobble, and DDR, probably).  It has one catchy as hell soundtrack - no, literally, just one.  It plays the whole time.  Simple gameplay, a hidden good ending, and years of playing the game with family and friends.  My brother's first words that he read were from Bubble Bobble.  Whenever I was sick, my mom and I would play through the game.  This was the machine I had to have....if it didn't go for 900 dollars.  There's always next time, when I didn't just spent a chunk of money to pay off student loans.  Such is life. 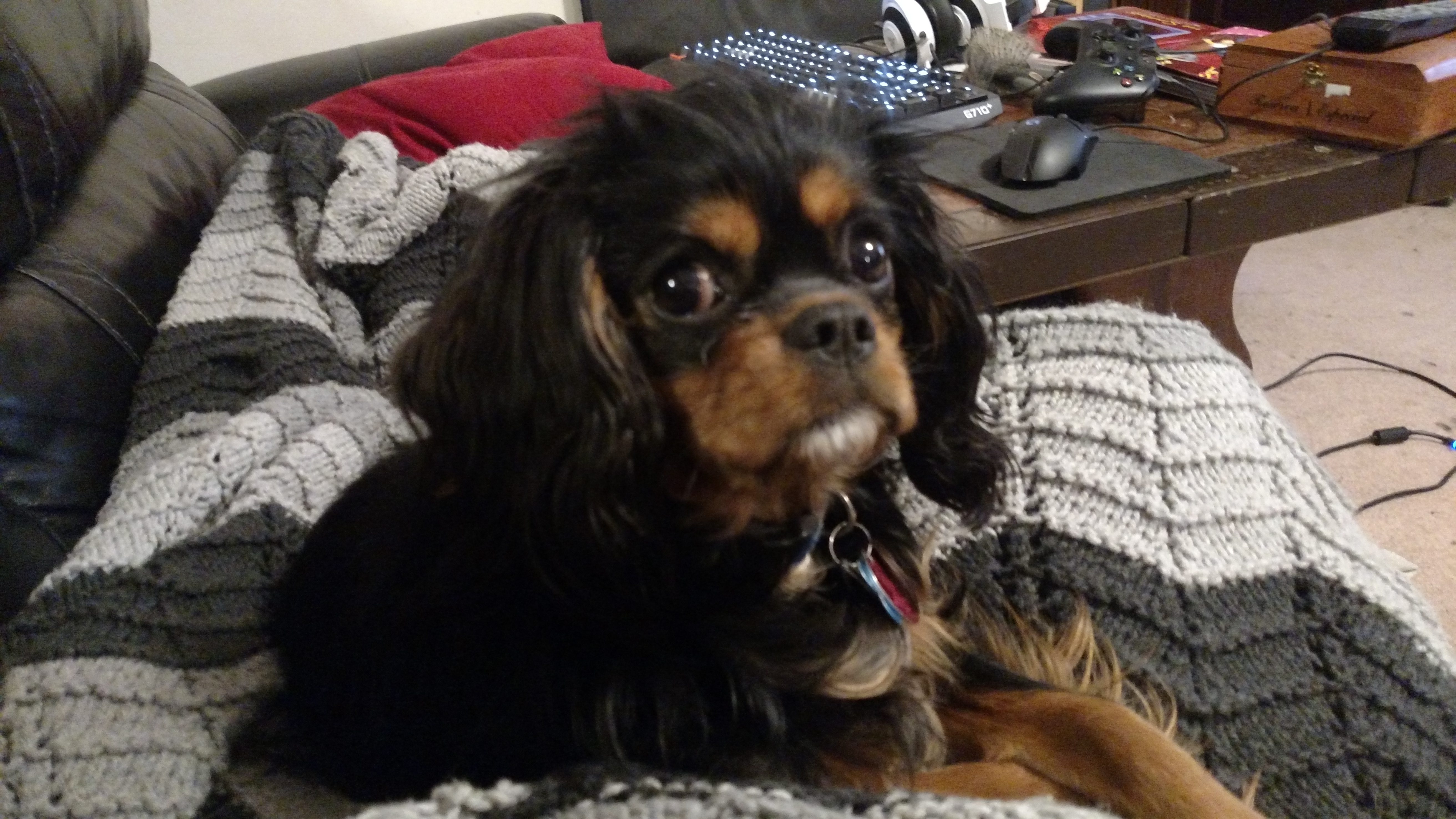 Finally, puppy tax!  She was happy to have me back from the auction!  Overall there were about 100 stand up machines, a handful of bar tops, maybe a dozen pinball machines, and a handful of trinkets (beer steins, dolls, sports memorabilia).  I didn't take pictures of some of the standard stuff - 3 NBA Jam cabinets, Star Wars, Pac Man, and Multicades - so many multicades.  But overall, its a great time, and I highly recommend that you go when it rolls around again!