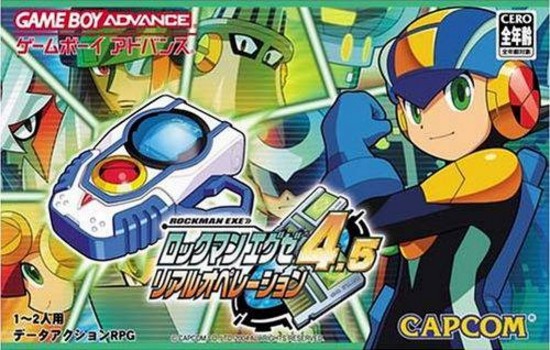 When Battle Network Rockman.EXE, otherwise known as Mega Man Battle Network, premiered in 2001, many Mega Man fans did not like the concept of a card based RPG based with Mega Man characters. Battle Network continued for six more years, releasing at least one game every year, however one game never made it to American soil, Rockman.EXE 4.5: Real Operation. A game with an interesting twist to the Battle Network franchise that gives almost an MMO feel to it, but the question is it worth importing?

Rockman.EXE 4.5: Real Operation isn't set inside the actual Battle Network storyline. In fact Real Operation takes you, the gamer, inside the world of Battle Network. When you first start up the game you'll have to set a few options, the time of day, your age, name, and occupation. Afterwards you'll be able to select one of four Net Navigator's. Each Navi has different stats and level up requirements as well as abilities both in the net and in battles. But don't worry, you'll be able to switch between any of the Navi's any time you want to, so don't worry about it being permanent. Throughout the course of the game, your Navi will ask you personal questions like if you have any younger or older siblings, who your best friends are, etc. so that they will be able to get to know you better. Each time you answer a question of their's, a program will appear in your homepage so you may add, edit, or delete any of the answers you gave to your Navi.

Because Real Operation takes you inside the Battle Network world, the game will take place in real time. Events will occur in the game as the days pass. Certain viruses will show up at both certain times and days. You'll also be able to add events into your calendar so you may remember events in either the actual game or in your own life. If you're actually playing the game at the time of the event, your Navi will inform you as well. To put simply, Real Operation turns your Game Boy into a PET. You'll be always be able to jack into your homepage and from there navigate the world.

Battling is much different from the previous Battle Network video games. It's not called Real Operation for kicks and giggles. Instead of being able to control your Navi and selecting chips in the custom window, three battle chips will appear at the bottom of the screen. You'll tell your Navi who to attack and how much distance they should keep between the enemy and themselves. You can always change your options at any time during the game, so don't think once you set it it's done. The custom bar is still present, but it works differently. Instead of waiting to fill up to select any chips, it'll limit the type of chips you can use. You can also inform your Net Navi to perform one of two attacks by pressing either the L or R buttons.

For those that purchase the bundle, you'll be treated to a Battle Chip Gate, a device that you can attach to your Game Boy Advance, as well as five Battle Chips that you'll be able to use with the game. You may also use any Battle Chip you receive from the Mattel Mega Man: NT Warrior toy line. Of course, you can purchase a Battle Chip Gate separately, however be sure to purchase the correct one. Real Operation only works with the Battle Chip Gate made for the PET Advance Battle Chips. It gives a different feel for battling seeming you have to use your own personal chips. However, you are able to use both the in game and your own chips during battles, so don't think it's a one or the other. The downside of the Battle Chip Gate is unlike your in-game folder, you will not be able to use depleted chips in other battles unless you jack out of the net. After using a Battle Chip, it will inform you on the screen how many times you may use that chip again. Another downside is that incase you have multiple chips; the game only thinks you have one of that particular chip. So if you have two Area Steals yet one's already been used up, you will not be able to use the other one.

Most of the time in Real Operation, you'll be on "Delete the Darkloid" quests as you venture from area to area hunting down the next Darkloid. This tends to be a damper on the game with the fact that in order to progress in the story of Real Operation, you have to hunt down every last Darkloid. You may also to participate in area tournaments. The only problem is that the tournaments all take place at the same exact times of the day. That also tends to be a problem seeming when your jack into the net, you always start in your homepage and are unable to create shortcuts to other areas of the net. There are also weekend tournaments you may sign up for. However, some of the sign-ups for the tournaments are only available during certain times of the day. Miss the 6AM - 7AM sign up? Guess you’ll have to wait till noon.

Again, you'll start off with only four characters. During the course of the game, you'll be able to unlock more characters by fighting in a specific weekend tournament or by using special Navi Chips in the Battle Chip Gate. Of course, a certain number of Navi's can only be unlocked this way. As well as fighting in the specific tournaments, some Navi's can only be unlocked if you fight in that tournament with a specific Navi. To put simply, you have to fight in the tournaments and the "Delete the Darkloid" quests with every character to fully beat the game. To insure replay value, each Navi will have their own specific folder and Key Items. Have a great Battle Chip in Rockman's folder? Unfortunately Roll won't have it in her's. Navi's can share Zenny, library, and chips in your Pack, but power ups, key items, and folders will not. So you'll have to start the Darkloid quest from the very beginning with the basic folder every time and beginning stats with every new character you play as.

Real Operation is good for die hard fans of the series looking for something to break the mold between the Real World/Net World adventures of Battle Network. The concept of actually being an operator while your Navi fights has it's advantages yet disadvantages as well, such as yelling at your Navi when he didn't dodge an attack you know you would have been easily able to. The addition of the Battle Chip Gate control also adds a sense of actually being in the universe, but at the same time makes you realize that selecting a chip in the game is a lot easier than searching through your collection to find the one chip you need. Real Operation has an interesting concept going for it, however with an uninspired quest and being forced to repeat it with multiple characters hinder this twist to the Battle Network universe.