Atelier Shallie: Alchemists of the Dusk Sea Plus (Vita)

And another great RPG for the Vita! For those who do not know, the Atelier series are always made in a series and usually a series of three. Atelier Shallie is the conclusion to the Dusk trilogy, but it is fine to play the game without playing the others. I played Ayesha, but skipped Escha and Logy.

The game follows two Alchemists who are referred to as Shallie because their full names (Shallistera and Shallotte) are longer and they needed to shorten it. The overall story is the same since Shallistera's is what follows the main story. It starts with Shallistera as their boat is attacked and they crash land in the nearby town of Stellard. The first half of the game is dedicated to Shallistera fixing it. The second half of the game is dedicated to finding out the cause of the Dusk that is causing all the water to dry up. The main story does not really pick up until Chapter 8 (out of 10) when they discover that it is tied to ancient alchemy. In the past, alchemy was much more advanced, but it also led to the slow dying of the world as the natural resources were pushed beyond their intended limits. This leads to Shallistera and everyone else restarting the machine to its natural intended levels in order to hopefully restore the world back to the way it was. 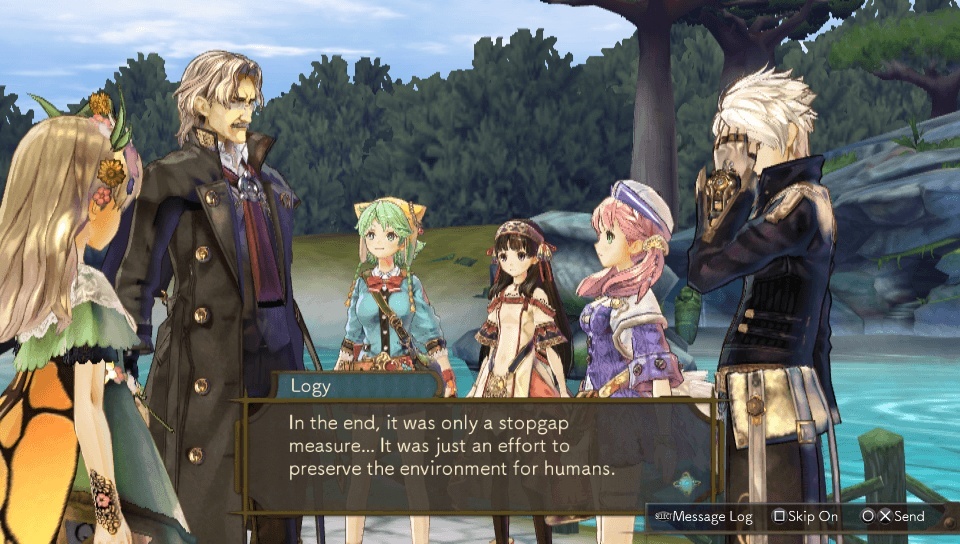 For a Vita game, the graphics are great. The environments and character models on the field screen are jagged at times, but it improves significantly in battle when there is a lot less to render. A lot of enemies are simple recolors and skill graphics range from simplistic, to massive cinematic ultimate attacks. The game reduces resource usage by dividing up the world with an old fashioned world map and most areas being one section. Later on in the game, there are more areas that are divided into smaller sub-sections. This works fairly well to prevent issues with the frame rate. The environments are also very diverse. They start from grassy areas to futuristic looking ruins. There are also a few illustrations that come at the end of each side story that are very well done.

The game has a brief introduction before it asks you to pick whether to follow Shallistera or Shallotte. The two stories eventually merge anyways, but Shallistera's is more complete while the early part of Shallotte's is more open ended. The overall story is fairly short if you stay focused on the task. Upon completing the game, you can start over for New Game+, which gives you new events and carries over some stuff from your previous playthrough. The big difference here though is that unlike most other Atelier games, there is no time limit!

Each chapter of the game is divided into two sections, main story and side story. The main story revolves around resolving the ever spreading Dusk Sea. When you complete it, it opens up the side story for the chapter. The side stories focus on character development, mostly relationships between the characters. You have to complete a number of events before you can progress to the next chapter. These can be anything from completing a number of fights under various conditions, smashing barrels, or creating items. This is mainly so that you are keeping up with your stats. If you spend too long on a chapter though, Shallie's mood goes down. I am not quite sure what that does though. It does not affect anything gameplay wise as far as I can tell.

The game has two main things to do, gathering and synthesis (alchemy). You spend the chapter heading towards a goal and can gather materials from enemies and the environments. If you play on higher difficulties, the items are better, have a better drop rate, and some items can only be acquired on the higher difficulties while the hardest difficulty of the game ensures you acquire all drops from the enemy. The point of gathering items is to engage in synthesis. Using the magic pot, you can craft items of all kinds. They start off as relatively simple healing and attack items, but you quickly encounter items that can be used to make better equipment. Soon after, you are introduced to a character that can dismantle items you made back into materials with their properties. You then refine this process over several times to create insane stat boosting items or items with unique traits. You will spend a lot of time just gathering materials and doing alchemy mainly just to see what you can do with it. The best items require you to craft and dismantle several times in order to increase the quality and properties of the materials. 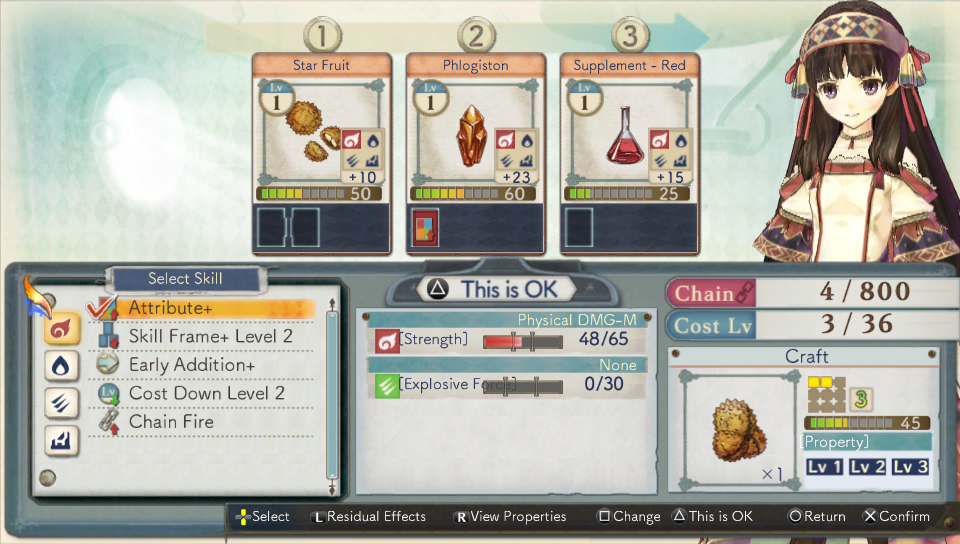 There are a few convenience features that can be unlocked. When you whack enough things outside of battle, you will eventually be able to instant kill weak enemies and collect their drops without having to actually fight them. By fighting and gathering items, you can use the control pad to seek out rare items, strong enemies, or just collect everything on the map for you. They are not convenient to the same degree as the automata that gathered items for you in past games though. That would have been very helpful here.

Unlike other games, you cannot bring all your items with you into battle. you have a basket that can hold a number of your alchemy items. As you make it further in the game, you get a larger basket and can place more into it. This leads to some interesting planning as you have to balance offense, healing, and supportive items based on the slots they take up and it becomes a minigame of Tetris at times. On top of that, only the alchemists can use the items. Each alchemist also have unique skills. For example, one of them can boost the power of all items while another can use the item without consuming it.

After level 40, characters become customizable to a degree. They earn special points as they level up that you can invest into. These either increase stats, increase resistances, or empowers an existing skill. Your characters feel a lot stronger once you get these abilities, but it is necessary to meet the unique challenges that are only available at the higher difficulties because leveling up often only gives a few points (you will almost never get more than 2 stat points into something per level up). With twelve characters at your disposal (you can only use six at a time), you can build teams that are focused on something. For me, my favorite is time cards because it allows you to do more each turn. Time card abilities are generally weaker, but they do something for several turns. For example, there are healing items that can repeatedly heal your team for the next three turns. You can have a few characters that focus on doing this entirely.

A strange thing about this game is that it is either incredibly easy or absurdly hard. There is no inbetween. Playing the game on the Story Watcher difficulty is the easiest, but also locks you out of some of the better items. However, until late game (like Chapter 9 dungeons), you will not face much of a challenge, even from most bosses. At that point, enemies suddenly have insanely higher HP and speed. Once you get some decently made items, even that can become a joke because you can more than double all your stats if you use alchemy correctly. Late game, the battles are all about managing your Burst meter. When this meter triggers, your damage is increased something like 300% and can be further increased with customized items that increase its power and duration. This is key to winning every boss fight and even some encounters. There was one insane encounter near the beginning of Chapter 10 against a boss that was healing like 1000 HP a turn. Luckily, it was optional to win, but he disappeared after that battle and never came b ack like the others. 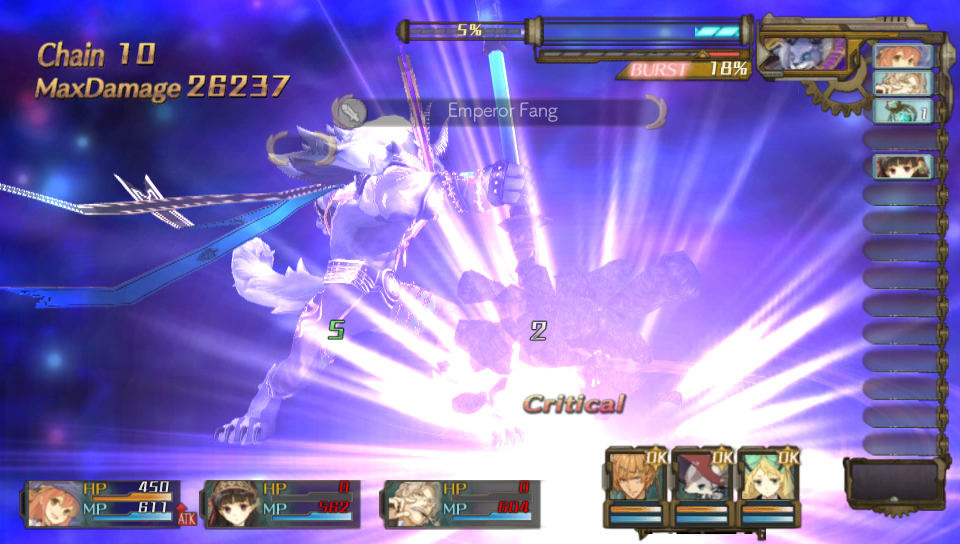 The biggest problem in the game is the terrible translation of some of the menu, most notably in the side quests. The translation seems to have been put through an auto filter of some kind as A LOT of the side quests have the wrong label on them. For example, one of them says to smash ten barrels, but you actually have to jump fifty times to complete it. There are quite a number of these, but you can sometimes check it in the description in order to find out what you really have to do. At other times, it is just flat out wrong, like in some of the characters' upgrade trees. Sometimes, they forget to space words or just have bad grammar. This was not fixed for the Plus release sadly.

If it were not for the dang translation errors, this game would have been excellent. The story is fairly simple. It has two main characters that you can play as. There is a difficulty option for new and experienced players. There is a high degree of customization. It does very well despite being on the Vita. The game sadly does block off some events if you complete too many side quests, so you might not be able to see them all in one playthrough or realize that some of them suddenly disappeared. Despite these problems, Atelier Shallie feels like the best Atelier games that I have played since Atelier Iris 2.