I've dreaded this game every step along the way. It's like I have no idea what the game is trying to do. It's like they took the weapon system of Drakengard, mixed in some Final Fantasy Type-o, then threw in the story of Final Fantasy 13 for good measure.

The game starts off with three different scenes, which are largely unrelated to each other. The real story starts with Noctis's journey towards Altissa because he is going to be married to Lunafreya. However, shenanigans occur and once Noctis arrives, he discovers that his dad is dead, the crystal has been taken, and the wedding has been called off. Noctis is then instructed by a mysterious man to undergo a series of trials. For some reason, the days are getting shorter and the nights are getting longer during the journey. When Noctis finally arrives in Altissa, he meets Lunafreya who tries to help Noctis with his trial, but is killed. Luckily, Noctis gets his father's ring. The mysterious man is revealed to be a Daemon/King by the name of Ardyn that has the same abilities as Noctis. He is pissed that when he absorbed the Daemons he defeated, he was unable to join the other kings upon his death. Eventually, eternal night descends and Noctis spends ten years asleep (or something like that) so he can prepare for the final battle. His friends had been keeping the Daemons away during those ten years and they reunite for the final battle. Noctis commits suicide to kill Ardyn. The story itself is a lot shorter than it appears to be.

The game looks like an upscaled PS3 game with a much larger world. The character models are decent, but you can see the rough edges quite often. The scenery is great, with decent lighting. The downside is that the further something away is, the worse it looks. The water is very awkward though. Many of the enemy models are beautifully detailed. The world is quite large and there are few loading screens in between. It is quite amazing what they managed to do with the in game engine for the environment. This really stands out in the fight against the giant bosses like Titan and Leviathan. The only disappointment is the lack of diversity in the environments. It feels like they could have done a lot more, but the areas makes it look rather plain at times because it looks like it just keeps repeating the same textures several times to make it look bigger. There are some thematic differences depending on which section of the world you are in, but it still feels like a whole lot of emptiness. Even adding more random creatures (especially unaggressive ones) would have made the world seem like it is not just a empty world. 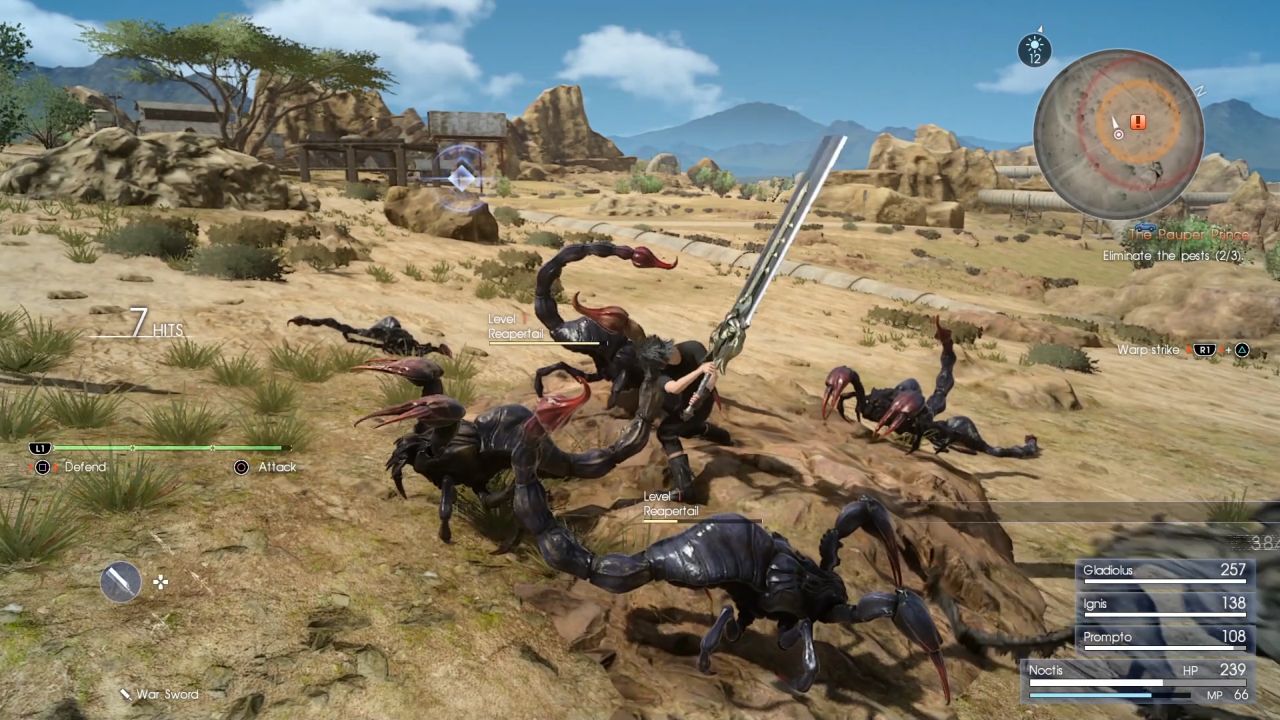 This is the first main entry Final Fantasy game that is an Action RPG and not a traditional turn based one. It is very different, but not in what I would consider a good way. Combat for the most part occurs in bursts. You are forced to a remote area of the battlefield if you want to recover your MP. You can hide to recover your HP and you are not truly dead unless your max HP reaches 0. When your MP is fully recovered, you go in for some warp strikes and then retreat and wait again. Combat is mostly done through holding down certain buttons. Circle is the attack and square is defense. Holding R1 locks on to a target. This is more or less the basics. The controls feel awkward at times though as holding down a button against multiple enemies does not seem to work as effectively. It is made worse by the fact that in some areas, they completely restrict your ability to run and the fixed camera also screws up your character movement during some cutscene sections.

What stands out to me the most is the voice acting. It is very well done even though the voices sound strange (it is probably because I watched Kingsglaive first and the few characters that do reappear sound very different). It makes a pretty bad story tolerable because you sometimes forget that there is a story in the game. The main story itself is very short for an RPG. I would say it is about a quarter shorter than the recent single player ones. With the emphasis on individual character personalities, the overall story took a massive hit in quality in order to emphasize those characteristics. Sadly, the lack of party members results in a generic group that never really undergoes any major developments. They still feel like they are the same people at the end of the game even though a lot of time had passed.

The action based combat is poorly done and is still an improvement compared to their previous attempts in Final Fantasy games. The weapons feel a lot better than it did with their previous attempts in Type 0 and feels a lot more similar to how a Drakengard game would feel minus the different combo strings. This is where the problems of FF15 begins to show itself. The combat itself is decent, but is far too simplistic. MP is more or less used for just warp striking until an enemy "breaks" so you can deal increased damage to it. It eventually just boils down to engaging with a warp strike and then either holding down circle or holding down square depending on whether you need to attack or defend at a given moment until you are prompted otherwise (exception to this in late game optional and post-game bosses). Magic is powerful, but far too limited in the game to be useful. You have to craft a limited number of spells by finding elements available out in the wild. Then, these elements can be crafted into three casts of a spell and the power of it depends on the amount of elements you put in. The best thing about the game is probably the fights against the summons. They are by far the most creative and interesting, especially when you compare them to the human fights.

Leveling is very awkward in this game. There are two types of experience. One from killing enemies and completing quests, and one that comes from leveling up and completing certain quests. The first type is just experience that you get from killing enemies or making certain decisions when talking to NPCs. The few number of enemies on the map makes it so that you will have to basically quest grind to level up. Your character is given experience that can then be converted to a level when they rest at an inn or a camp. This is extremely awkward as campsites are far and wide apart and inns can be very expensive. If you die, the experience that is not converted is lost. Most of the time, this mechanic ends up being a frustration more than something to make the game more interesting. You should not have to go back to town every time you want to level up. Leveling up and completing quests also grants you AP you can spend on abilities to either improve Noctis and his friends' abilities or unlock new abilities altogether. New moves are often cheaper than powering up existing moves. This eventually allows you to make much more elaborate moves.

The open ended world is awkward. There are a few activities, such as minigames here and there, but there are too many restrictions that makes the game feel awkward at times. There are invisible walls when there are clearly visible ledges for you to drop down to. Sometimes, they force you to walk back to town to trigger events and thus prevents you from using fast travel. You have to talk to NPCs before certain harvesting points become available on the map. The car itself is slow and needs to be refueled with a cutscene at times. The "towns" mostly consist of an inn, a gas station, and three shops in most cases, resulting in most of the towns you encounter feeling like just a pit stop in your never ending road trip. You keep hoping that you will see a large city next, but they are rare and wide apart. The time system is an interesting feature, but the day and night restrictions and the inability to be able to quickly change the time can make it frustrating when you have to wait for night time before you can do certain quests. If you accept the quest, you can choose to wait to night, but after that, you will have to sit and wait if you declined to set the time to night. The world is large, but there's nothing to populate it, not even people. You only encounter people in the large cities. Outside of the large cities, you will only have a diner, a shop, a weapon NPC, and an inn to talk to. If you stop by the first gas station in the game, you also get Cindy and Cid to bring that total up to six. Your average town is only slightly bigger than the save point of Final Fantasy 13. 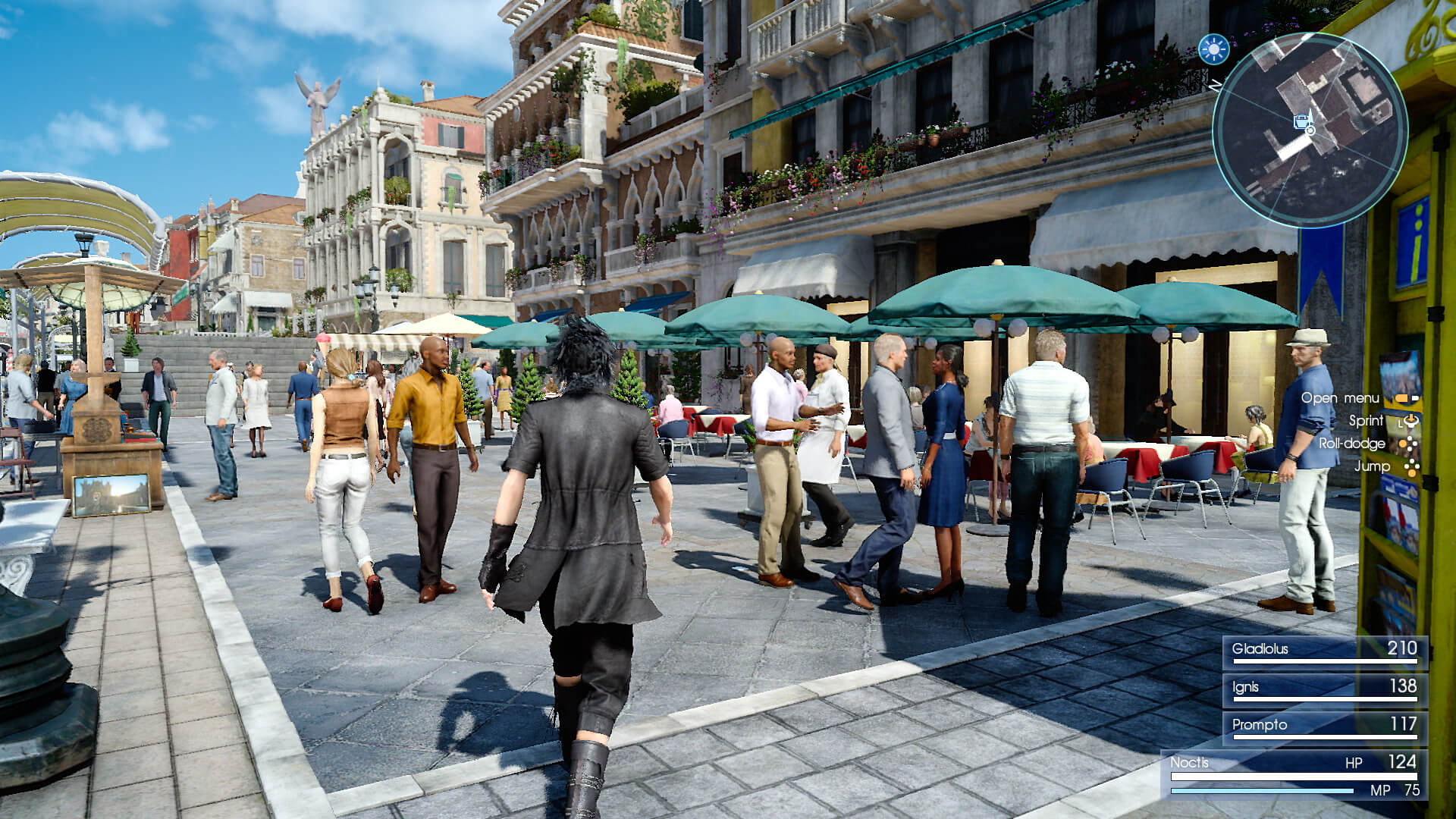 Final Fantasy 15 does not feel much like a main entry in the series and feels like a spin off that needed the Final Fantasy name to sell. It feels more like a hack and slash game without enemies more than anything. The combat feels like a simplified version of the one from Kingdom Hearts. A guest character that appears later on named Aranea highlights the potential that this game could have had if they had more characters to work with. Combat is severely restrictive and again, feels like a dumbed down version of Kingdom Hearts's Commands that you could fuse together (that would have been so much more interesting). In the end, the game feels more like a mash up of past ideas. Sadly, it looks like this is the route that the Final Fantasy series is going to be continuing down in the future. There is a lot more to say about this game, but it is mostly negative and more examples of where this game went wrong. For something that was built up for so long, it turned out to be a massive disappointment, especially considering how far it has gone since it was called Versus 13. Considering that Nier: Automata by Square-Enix is also around the corner along with the Kingdom Hearts re-re-releases, if you have not already purchased Final Fantasy 15, it is probably time to skip this game in favor something that is essentially superior in gameplay. At this point, the Final Fantasy series is no longer Final Fantasy. It's just a random collection of games attempting to sell using the name.