Generally speaking, death within a video game is seen as an event to be avoided at all costs because it brings with it a "Game Over" screen. It is refreshing, therefore, to encounter a game which scrutinises the topic of death from a different perspective.

I stumbled across mid-development images of A Mortician's Tale on Twitter and they instantly piqued my interest. The game, which is being created by Toronto-based development team Laundry Bear, follows newly-graduated mortician Charlie as she takes care of the deceased, looks after their family and handles the day-to-day running of a funeral home.

As a person interested in the death positive moment (I am particularly a fan of Caitlin Doughty's "Ask a Mortician" series on YouTube), I was delighted to have the opportunity to exchange emails with the key designer behind A Mortician's Tale, Gabby DaRienzo. 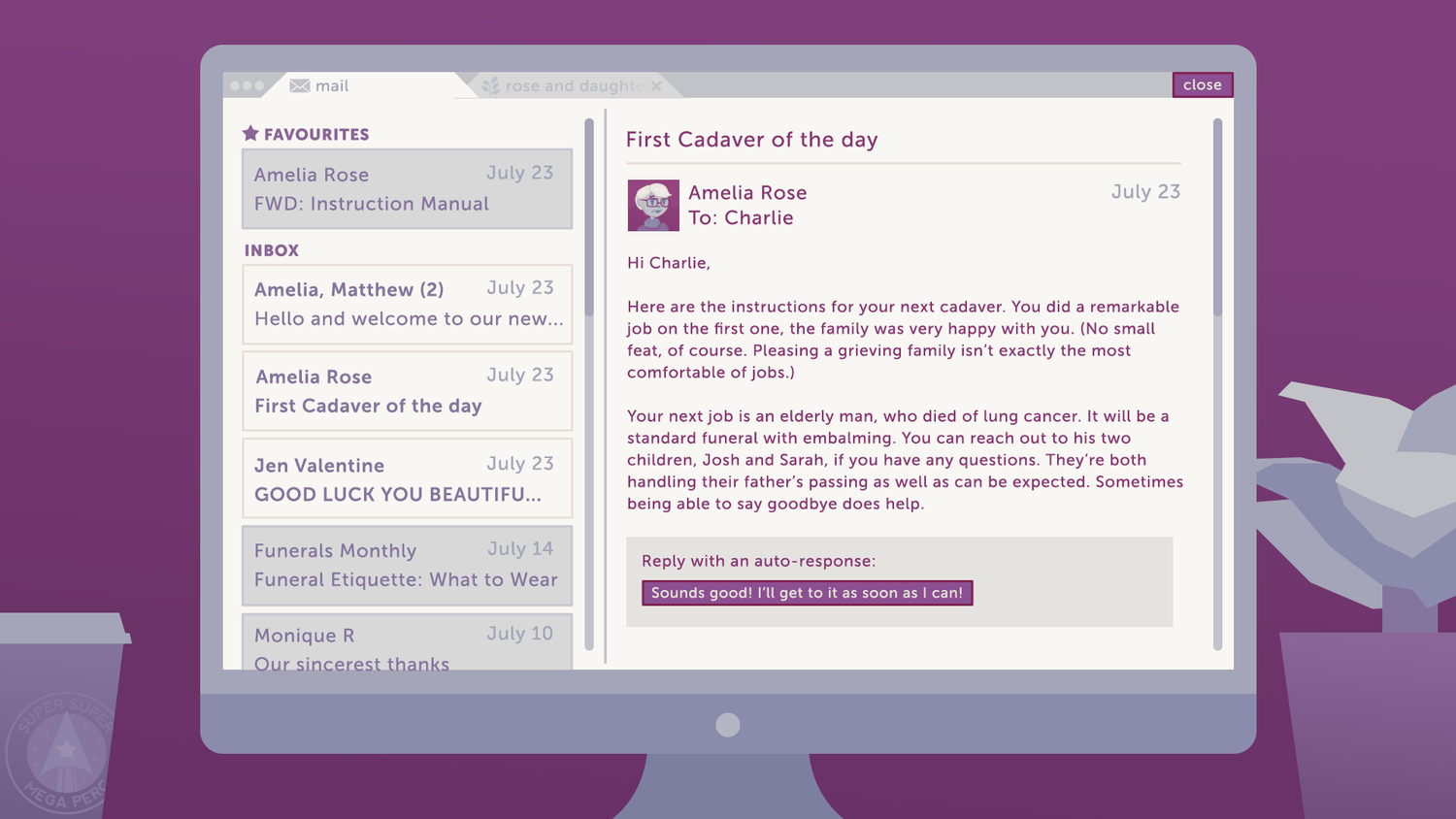 CC: You say that the work of Caitlin Doughty inspired you to make the game. What was it in particular about her work that motivated you to design A Mortician's Tale?

GD: Making a game about being a mortician has been something in the back of my mind for a while, but it wasn’t until I read Caitlin’s book "Smoke Gets In Your Eyes" that I was really inspired to actually do it. Caitlin’s work in death advocacy is so important, and it helps that she is so funny and honest and open to talking about it. It’s a tough subject for a lot of people, and her being so transparent with the industry’s practices in an approachable (and often hilarious) way I think eases people into it a lot better.

Not only is she just an incredibly badass lady, but she also helped kick-start the death positive movement and create a huge community around it. It’s through her organization The Order of the Good Death that I was introduced to so many other death professionals, artists, and writers — so many of whom have greatly inspired A Mortician’s Tale. Sarah Chavez Troop, Sarah Wambold, Amber Carvaly, Jae Rhim Lee, and Carla Valentine are just a few of many.

We wanted to create a death positive game that is honest and open about these practices, and showcases death and mourning at its rawest. We wanted to show some of the more gruesome things people don’t often know about in body preparation, but also talk about home funerals, green burials, and death issues that are so important to us and the community.

So many of the Order of the Good Death members — Caitlin especially — have not only been huge sources of inspiration for us, but also incredibly supportive too. We really hope we can do the topic justice. 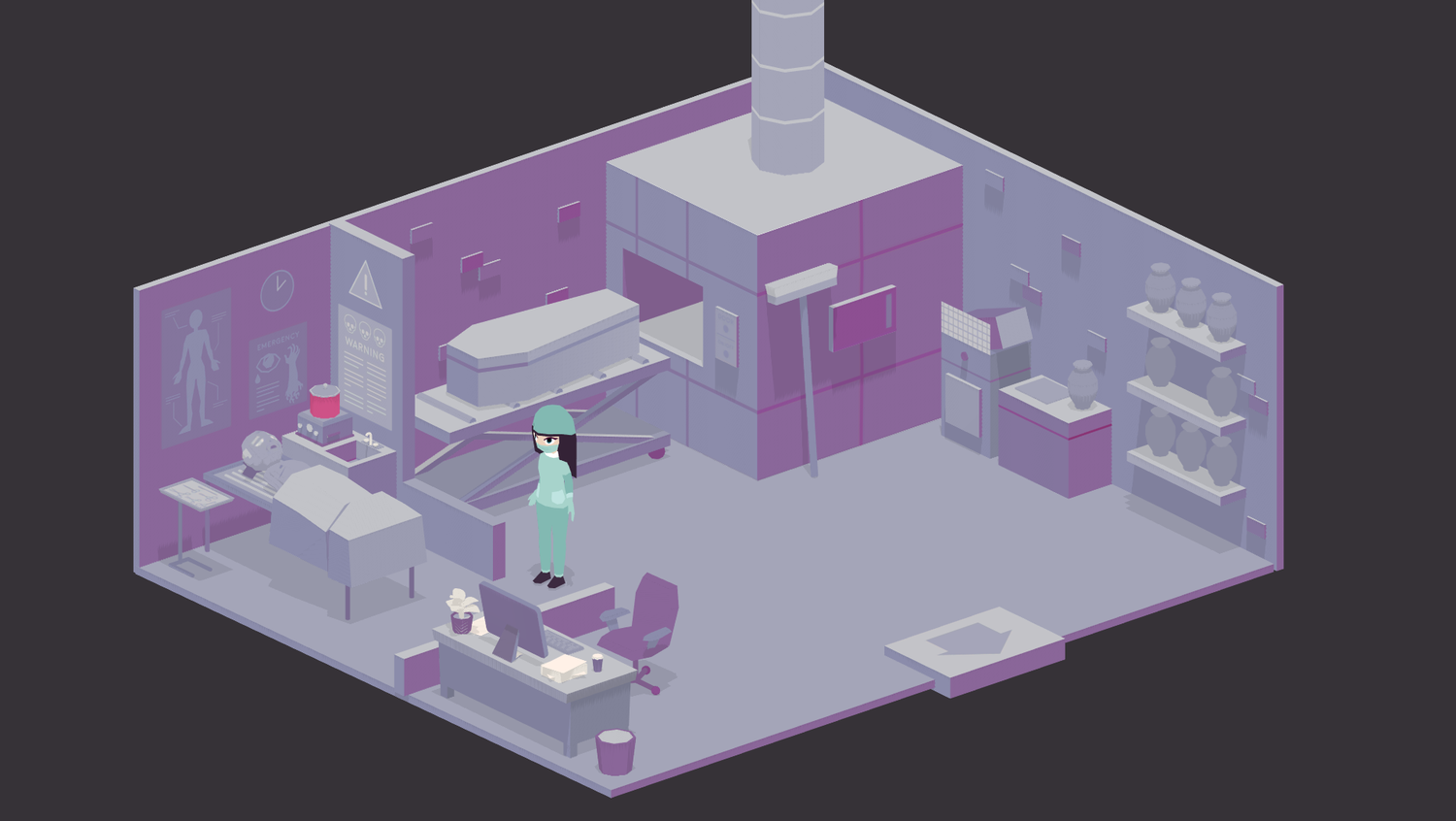 CC: How are you balancing the realism of making an educational game against making an aesthetically pleasing game with a distinctive art style?

Developing the game has been a great balancing act of “being honest vs being approachable” and because of that we’ve had to make a few calls on what content to include/exclude in the game (probably the most notable example is the use of diapers to prevent a cadaver from “leaking”, something we decided to exclude from the game, despite it being a quite common part of body preparation in the funeral industry).

Regarding the art, I originally made a prototype for the game in PICO-8, which is a fantastic game making tool and “cartridge player” that’s known for its limitations. Because of its limited palette, I made the prototype using only 4 very purple-y hues (you can find photos of this here).

When we decided to make A Mortician’s Tale into a full game, we opted to change the art to a flat-shaded, low poly style (to better accommodate some higher-detail features that need more detail that we couldn’t really do in pixel art) but I really wanted to keep the purple-y, somewhat monochromatic style.

Part of the decision is purely aesthetic — I like the way it looks and the gloomy but somewhat hopeful feeling it evokes really fits with the game — but a lot of it is practical too. Because of the nature of the game, and some of the more graphic things we show, having the game appear in mostly monochromatic colours hides things like blood, or discolouration of skin and eyes, and hopefully makes the subject a bit more digestible for players. 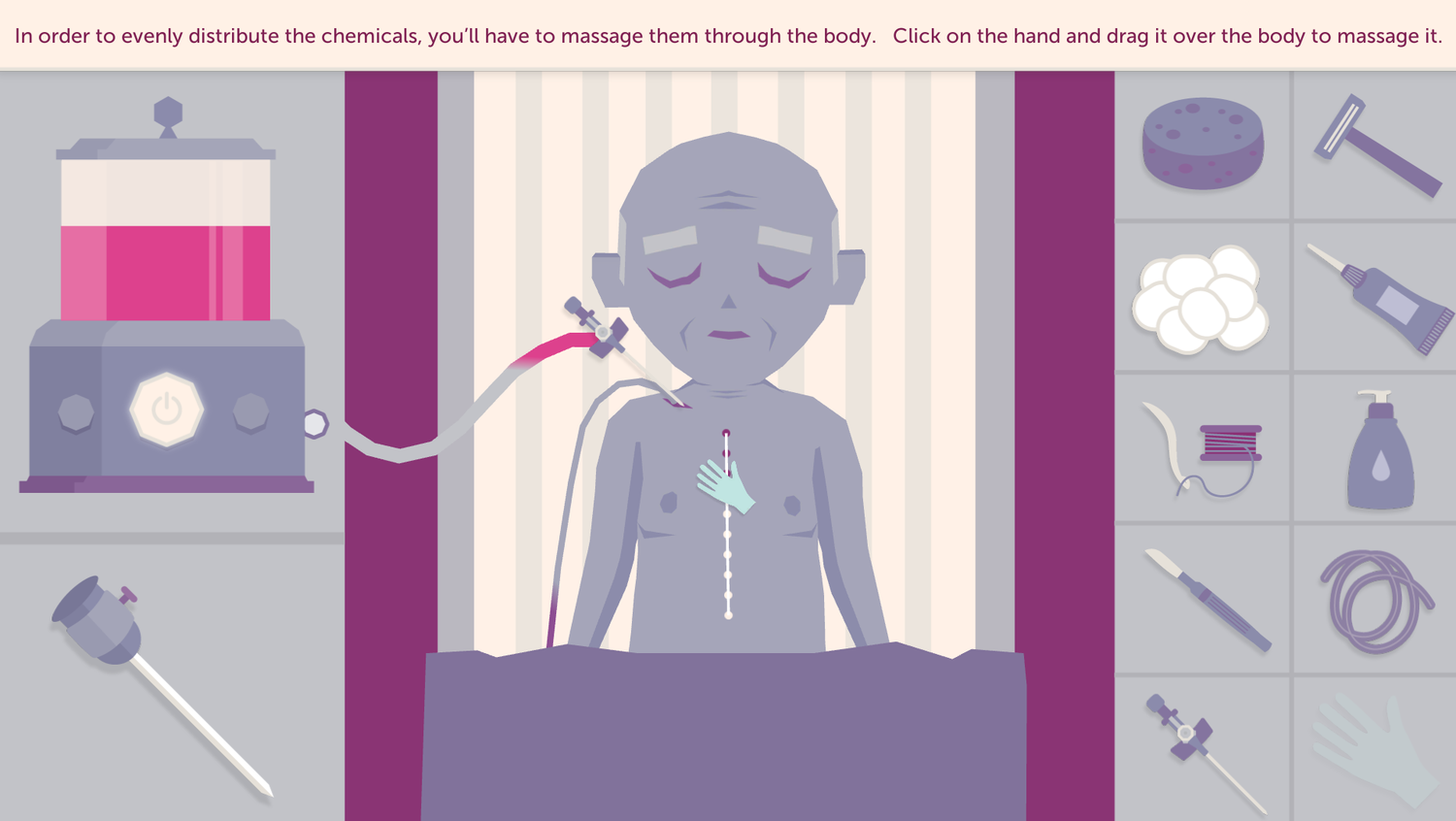 GD: Although A Mortician’s Tale does cover a variety of different kinds of death, we were much more focussed on dealing with different types of grieving. There’s a lot of super fascinating stuff regarding body preparation for a whole range of deaths or levels of decay, but the thing we were more interested in was exploring mourning and grief.

Death and how we process it, mourn it, or celebrate it is so personal from person-to-person and culture-to-culture. It was much more important for us to explore that than making the bodies varied in deaths, and we put a lot of our personal experiences and thoughts/feelings regarding death and mourning into the game. 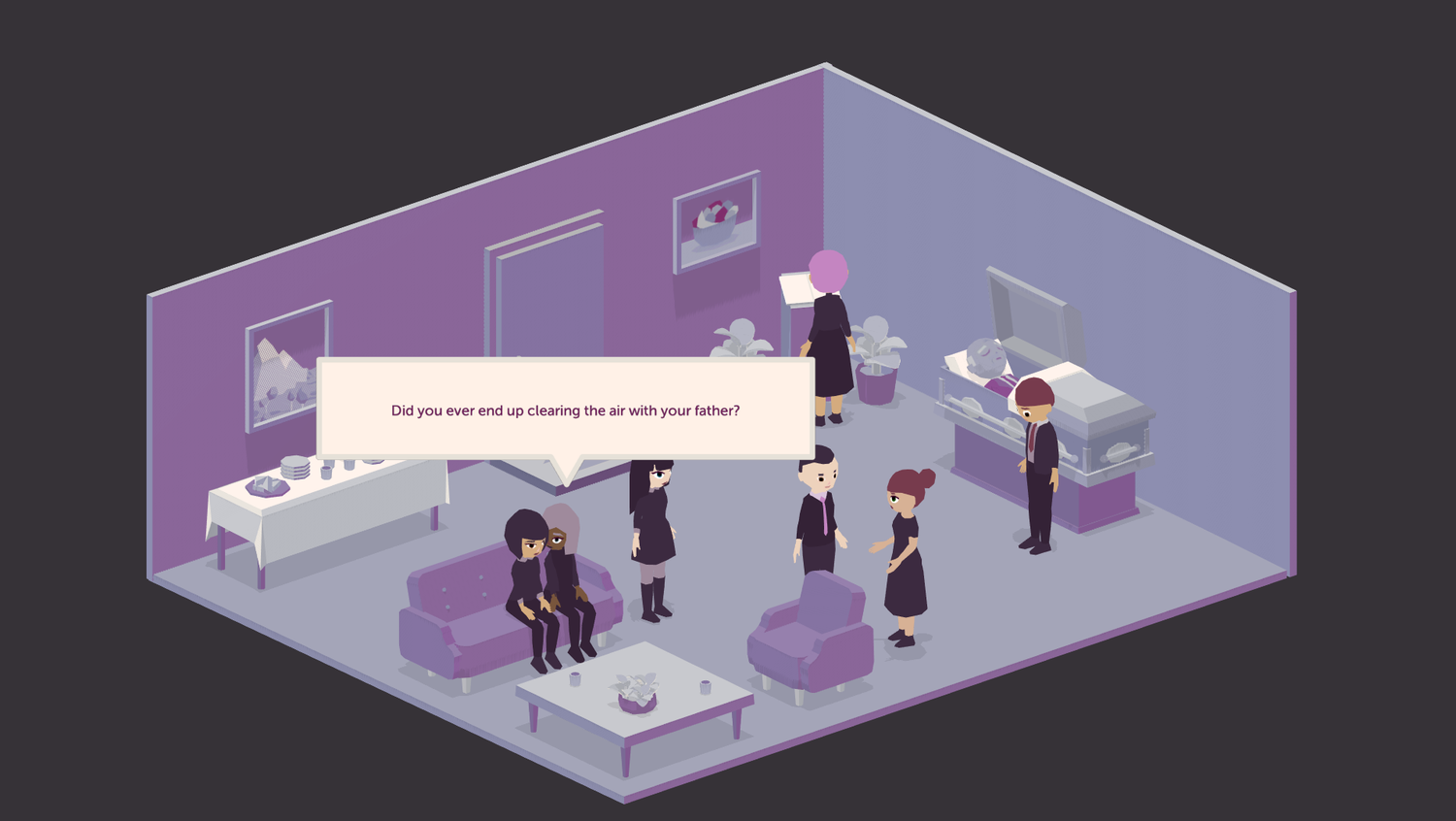 CC: Are there any games out there that you drew inspiration from, regarding how they deal with death?

GD: When we started working on A Mortician’s Tale, I was really interested in having conversations with people about death in games and was super surprised with how willing/excited people were to talk about it with me. After having discussions with other game developers re: their experiences with death and how they reflected it in their own games, I decided to start a podcast dedicated to the subject.

I’ve been doing the Play Dead podcast over the last year (its second season starts this week, actually) and through the podcast I have had the opportunity to interview tons of game developers, each talking about their own experiences with death but also how they’re using it in their games. It’s been super interesting to hear all their stories and see it directly reflected in their games, but it’s also been tremendously inspiring.

One particularly inspiring developer has been Lucas Pope (who I interviewed in episode 4 of the first season). He talked a lot about death in his upcoming game Return of the Obra Dinn and in Papers, Please but also just game and narrative design in general. At that point I had already started working on A Mortician’s Tale solo (before I had received funding to bring on a whole team) but the design was much different — it was a lot more shallow, and focussed on death in games, specifically.

After talking with Lucas, I had a bunch of very fresh ideas I wanted to bring to A Mortician’s Tale, and the game has evolved to be less about death in games and more about death itself, the funeral industry, and the careers of those who work within it.

Another big inspiration is Kaitlin Tremblay, who is the lead writer of A Mortician’s Tale. Aside from her writing work, Kaitlin is a game developer who also develops a lot of narrative-heavy games. A few years ago I played her game Say When — a horror game made in Twine that deals a lot with mental health and body horror — and immediately knew I wanted to work with her someday.

A Mortician’s Tale is very much not a horror game — we’re trying to do the exact opposite, in fact — and Kaitlin has been incredible at handling the subject matter respectfully, and has been magnificent at showcasing how each person individually mourns. It’s such a hard subject to tackle and I feel so, so honoured to work with her, and the rest of the Mortician’s Tale team. 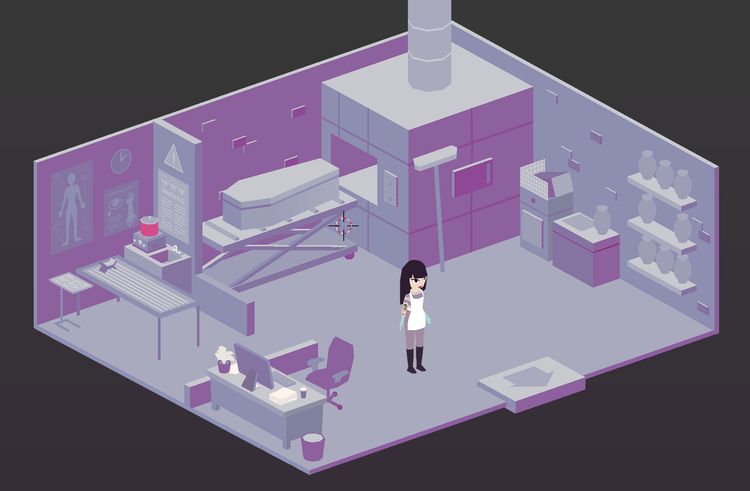 CC: Are you hoping that your audience will have a different perspective on death by the time they have finished playing?

GD: In A Mortician’s Tale players will learn some of the ins-and-outs of the funeral industry, including specific processes that aren’t normally openly talked about but that are important for us to know in order to make informed decisions regarding our (and our loved ones’) funeral wishes.

Our biggest hope for the game is that it will encourage players to maybe be a bit more comfortable with thinking about death, and really think about what they want for themselves when they die, and maybe spark some much needed conversations about death with their loved ones.

A Mortician's Tale is due to be released on PC and Mac early this year (Steam and itch.io).