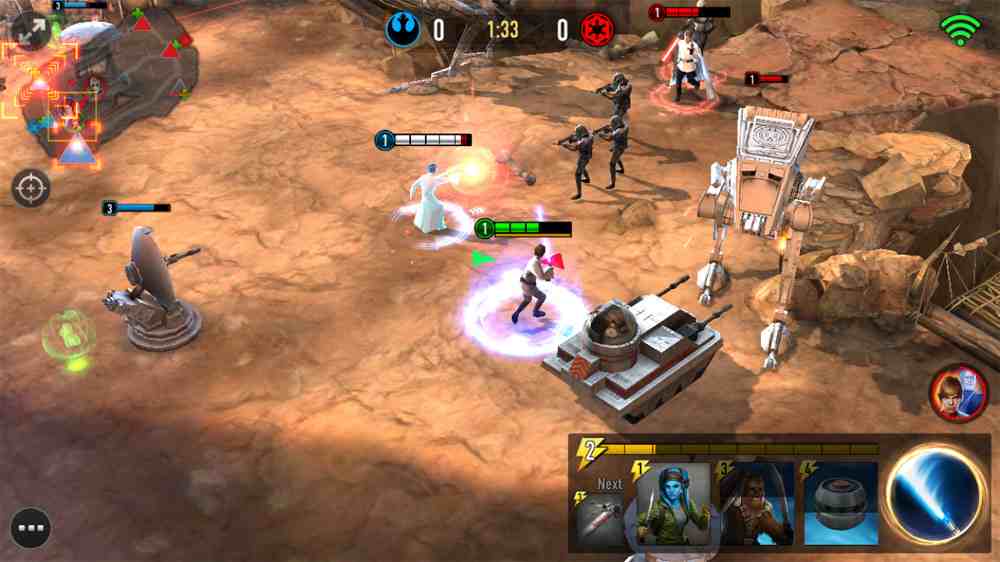 "Did you just summon a bunch of Scout Walkers in one turn?" "Yeah, so?" "That's against the rules." "Screw the rules, I'm Director Krennic."

So, do you like Clash Royale? 'Course you do. Everyone likes Clash Royale. What are you, Steve Bannon or something? It's great. And it's fairly safe to say your relationship with League of Legends is largely positive, even if you don't actively play it. So how about if I told you that Netmarble just released a game which is a Star Wars reskin of Clash Royale, but you can play as Emperor Palpatine and run around inside the map frying the other player's units with force lightning? OH, AND IT'S GOT K-2SO IN IT. OH GOD. I HAVE TO GO TO THE BATHROOM AND USE THE FORESKIN.

I'm going to sum this up reeeeeeally quickly for you. It's a MOBA. Three turrets at each end of the field. 1v1 or 2v2 combat. Co-op play with guildmates. You drop cards onto the field to generate mobs like Clash Royale, but you run around the field using special abilities like League of Legends. Same page? Same page. Good. No wait, let's use a different page. Those pages there are stuck together. (SPOILER: THEY WERE THE ONES WITH K-2SO ON.)

Well, here's the good news. You're going to love it. You're going to wake up in the middle of the night, pick up your phone from on top of the pile of magazines about Alan Tudyk on your bedside table and decide to have a quick game before you go back to sleep. They you'll realise the sun is coming up. Here's the bad news: It's going to be a very qualified kind of love. 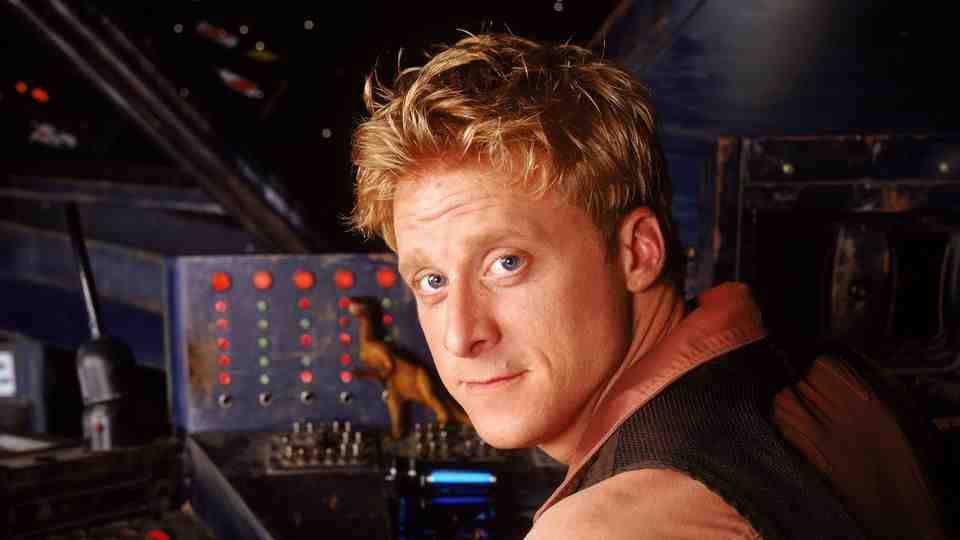 OH WOOK AT HIM

Like The Last Guardian, Force Arena is a great time waster which has been made by people who very clearly care about the product. (The starting tank card for the Rebels is a Kenner toy that never appeared anywhere in canon. You can't tell me that's not crafstmanship.) Also like The Last Guardian, whether or not you ragequit, play it once then forget about it forever or delete it in disgust and then fling your personal electronic device into a pit of rotating knives is going to depend on whether you can put up with its two big flaws.

We may as well get the freemium element out of the way first. I'm sorry guys, but having a levelling up system in a MOBA that you can't opt out of is garbage. It slams the brakes on any ability you have to sit for hours and marathon the game, because once your rewards run out until the next four to eight hour block elapses and you can open another booster pack, any matches you play are essentially spinning your wheels thanks to the fact that cash rewards for victories are piffling and they cap the amount you can grind. I'll say that again, THEY CAP THE AMOUNT OF CASH YOU CAN GRIND PER DAY. You can play to up your rank, but eventually you're going to hit the level wall and to up your own level you need cards. Lots of cards. So it's back to waiting.

And God do you wait for some long-ass times. It's like waiting for a delayed plane. Like waiting for Godot. Like waiting for Alan Tudyk, aka K-2SO, King Candy and The Duke of Weasletown, to be approached to reprise his role as Wash in Firefly. Waiting four hours to open a pack of cards is bad enough (although nothing Clash Royale fans won't be used to), but the game has an even scummier trick up its sleeve. The four hour wait times, you find out, are a SUPER SPECIAL WELCOME GIFT THAT THEY'VE BEEN SO GENEROUS TO GIVE YOU FOR NOTHING! Yes, the game drops you in to a limited period of "Premium access," where the wait times are halved (EIGHT HOURS FOR A CHRISTMOTHERCOCKING SILVER LEVEL BOOSTER PACK) and you get two extra seats in the green room for your unopened packs to sit on.

So there's that. To be brutally honest, though, I didn't really expect anything different. What's preventing me from going full Jedi with Force Arena is the simple fact that the casual game is not fun to play. The meta's great. Nothing wrong with the meta. I mean, the game's broken as all hell, but one of the greatest joys of a new PvP game is figuring out how to break it, waiting for the next patch and then figuring out how to break that too. Git out the way, y'all, cuz Suicide Luke and Good Ol' Zerg Rushin' Leia are headin' to town. Yee-haw. Good clean fun.

What I'm getting at is that it doesn't FEEL fun to play. There is not enough sensory feedback. To make a comparison, Supercell (makers of the Clash games and Boom Beach) understand use of colours, use of animation, use of delightful sound effects that make everything pop when you hit an action, use of GIANT GODDAMN EXPLOSIONS, so on and so forth. Force Arena, like all mobile Star Wars games before it, feels loose. Floaty. It has a mannequin-like unreal quality to it. The blaster bolts don't look like they hurt like hell. The lightsabers don't feel like they've got some oomph behind them. You don't get WHOOM and WOMP and FIZZ, you get one character running up to another and waving a glowstick around while you watch a health bar go down.

I think Force Arena has got potential to be very good, maybe even actually great. The dev team are certainly Star Wars fanatics (Darth Vader's unique card is Doctor Aphra, and if you get that then you don't need any more explanation). I'll stick with it for a few weeks at least, probably a month or two. By then we should have a better idea of whether the game's going to be fine tuned and to what degree. 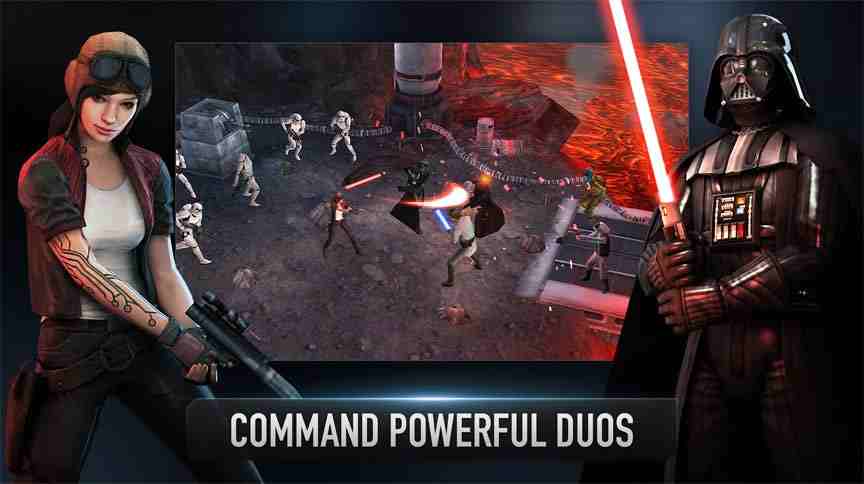 Oh, and to everyone saying that AT-ST walkers are OP: If you're getting sieged and you've let your opponent build up seven points to spend on top of that, you were pretty much screwed anyway.