After reading all the recent stories of Blade Runner (Westwood/Virgin Interactive, 1997), I decided to play through it again while streaming. Trenchcoattailing didn't turn out to be a good idea, though.

One playthrough is now done... and I'm thinking I shouldn't have done it. It would've been better to remember it for the good it had instead of its downsides. For all the good parts of it, you'd do well to read Chris Moyse's article on the game. Or see most of the stories that have been published in various media. Typical of those, though, is that they're oh so positive about the game.

Let me change that.

I wrote this as I was reinstalling Windows, which is the excuse I use for being this grumpy.

Westwood had made other point'n'click adventure games before, namely the Kyrandia series (Westwood/EA, 1992-1994), but there were a few parts in Blade Runner that make me very wary of trying those out.

I streamed the game on Twitch in two parts: first for four and a half hours, with Mr Moyse watching and helping me, and another session by myself, about two and a half hours. In total, the game took me about seven to eight hours to beat this time. I'm pretty sure I hadn't played it in over ten years until now, so the game length is pretty good by today's standards, even if I spent time stuck twice. The game's randomization of who is a replicant and who is not, as well as the different ways the player can act (replicant sympathiser or not), adds some replayability, but the crime scenes are still mostly the same. Pick up the same items. Find the same clues. But at least the branching can happen at the start, not in the last 15 minutes or so.

Many of the recent recounts have commented on how the game's visuals have aged: the character voxel models don't look as good, the looping background animations have visible compression artefacts and so on. I would, however, say that those aren't that bad even today. The only time I was really bothered with them was with Guzza, McCoy's boss: his face was too unclear in his office. Overall, the visual and aural design is still spot on. 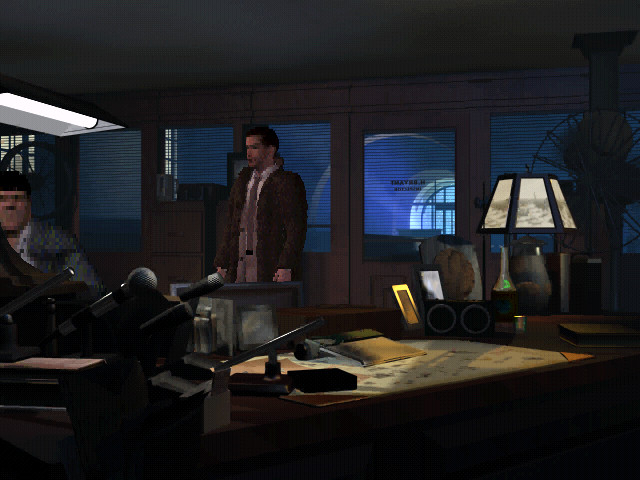 Today, I also appreciate that the game didn't have item puzzles, making the game more of an interactive story than a puzzle game. My bad for still not having played Telltale Games' "recent" adventure games.

That is not to say there were no mistakes made with the game, such as those that I'll list right now. Of course, I imagine some would argue at least the first point is what adventure games are all about.

Finding the tiny pixel hotspots was the bane of old adventure games, but that has been mostly avoided in good adventure games. Most important hotspots in Blade Runner aren't tiny either. But finding a brown thing on a mostly brown background isn't my idea of fun, even if the hotspot is of decent size. Going through camera photos for clues may also be hard, but I don't think those are as mandatory to advancing as this one item was.

If you're not afraid of spoilers, I put up a screenshot of that situation here. The item is to the left of McCoy, about on the height of his knees. Mind you, I'm not advocating that a button prompt appears next to the item.

While the hotspots (items, exits) that change the cursor to show there's something of interest here, the exit should draw the player's attention to it. I got lucky with one, not so lucky with another. Maybe this was a side effect of being so visually loyal to the movie?

With this, I mean that a narrow alleyway was a necessary exit to take and find, but it looked like any other alley that was not an exit. Again, here's an image of that exit, the pointer showing its location.

Yes, there are worse things than QTEs. I was tempted to say I had more fun with the QTEs in Fahrenheit: Indigo Prophecy (Quantic Dream/Atari, 2005) than the action scene in Blade Runner, but that would be an exaggeration.

Blade Runner has a moment that requires you to hammer the LMB as fast as you can -- and hope you're clicking in the right place -- or you die. This took me many tries and Mr Moyse going through a walkthrough. As a sidenote, I haven't played Indiana Jones and the Fate of Atlantis (Lucasarts, 1992), so I'm not too keen on seeing the fight scenes there.

3. Once, only inaction works

Imagine that to advance, you need to stay in one location for a while - say, half a minute or more. You can move about (I think), but not leave the screen.

While having something happen because you wait for a moment may break conventions, I'd say it breaks conventions too much if it keeps you from progressing. I think this is part of being a "real-time game": I don't know if it was intentional or a coincidence that I happened upon an NPC walking down the street once, and that NPC would turn out to be a key plot character later on. Staying in the closet in Stanley Parable (Galactic Cafe, 2011/2013) was fine, because the player didn't need to wait in there. Player's actions was still a valid way to advance.

Don't let the player make a mistake that'll kill them without telling the players they're about to make a big mistake that isn't obvious (like shooting at a bomb). At least Blade Runner wasn't anywhere near as bad as Space Quest. Please, let "Save early, save often" be left in the annals of history instead of a handbook for modern game design. It will be left there because of the inherent instability of game programs, unfortunately.

Yes, I'm talking about the rat. 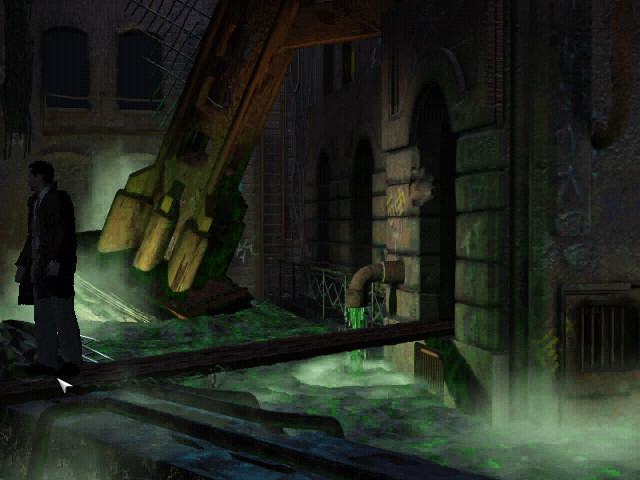 The rat is gone, and good riddance.

In case I haven't hammered it home to you just yet, I'm not a native English speaker... and the game offers no option for subtitles. All the dialogue is in voiceovers only. It may be that if I listened more closely to what the characters say I would've avoided issue 3. I've always had a better grasp of English as a written language instead of a spoken one, and I'm positive I'm not the only one. Maybe that is changing now that pupils can listen to as much English as they want on YouTube.

Towards the end of the game, you can be attacked from behind obstacles and since you can't shoot back in such case, your best recourse is to return to the previous screen and then go back, with the attacker typically having vanished. I don't know if you can heal your injuries or not at all, so this is more than a bit annoying.

However, this may be because of something else... I couldn't see targets at the shooting range either, so it's possible that there's a bug that hides the attackers. That's why I put this in parentheses.

But... how did I get it to run on a 64-bit Windows 10? Actually, the biggest problem was the installer. There is an installer around that uses the original CDs but works under Windows 10. Beyond that, the only bigger issues I think I had with the game was that I had to manually create a subdirectory named "Save" before I could save and that the shooting range didn't show up targets... which thankfully wasn't necessary to complete to finish the game. I've read claims that it's because of CPU being too fast and as a result, some plot branch of the game is inaccessible. This happens also at another location, which renders yet another branch inaccessible.

A month ago, I would've said this was a good game, maybe not on par with The Longest Journey (Funcom/Empire Interactive, Tri Synergy; 1999), but still a good one. Now, though... I fear what I'd say about The Longest Journey if I replayed it and didn't remember the solution to how to get the key from between the rails.

If it were possible to upgrade Blade Runner for modern platforms, the game might be less work than upgrading, say, Gabriel Knight 3 and its infamous fake moustache puzzle, to modern design standards, but the game does have enough room for improvement. But, with the source code and assets lost, it will not happen.

But half a week after finishing the game, I'm falling back to the old habit of calling it a good game. Maybe I'm just too kind. Or maybe it really is... even if I cannot find all endings on a modern PC.