Special Little Places: Are We There Yet?.

6:00 PM on 01.02.2017 (server time)    0
Got this out a bit late due to moving homes and the holidays.
For quite a few years since my first  year of High school me, my best friend Harry and his mum travelled to his Nan's place usually a few times a year and on the school holidays.
Now let me just say the journey was absolute hell, usually about 5 odd hours of driving and that's if we were lucky, I recall a time when we were driving for about 9, almost always with his massive Labrador dog in the back seat stinking up the damn car and a ton of suitcases cramping up the backseats...I also get car sick very easily! Hooray!

Gonna need a bigger bag...
Though I can happily say I was never actually sick, (thank Christ).
That all being said it was always worth the journey to me.
It's in a good location, near the shops for food with buses to the city which has a cinema and a TGI Fridays(damn they do good food) and a HMV that actually knew what the fuck an anime was and had a dedicated area for them, I got excited to go to the city there for that reason alone.
The house itself is quite big, since it has 2 living rooms we were given basically free reign over one of them, it had two large cushioned armchairs which were comfy and an old CRT TV which had a slot for some hellish abomination called A VHS tape.
Upstairs we had a room with another small vhs tv and two beds, the room was cramped because Harry has no idea how to clean up so it was scattered with old gaming magazines, toys and demo disks, it also had a lot of his mums old stuff such as old dolls which was a weird contrast with all the gaming stuff scattered around.
I also just want to say how much of a sweet old heart his nan was, she always ended up treating us despite barely knowing me which I kinda feel guilty for since I don't feel I  got many chances to repay her kindness, we also had a bit of a tradition of going to a restaurant called the wheelhouse which served awesome burgers, though the place changed management a few years in and we stopped going.
Generally we'd just spend 3 or 4 days just playing games and watching movies, after a few trips my brain kinda started snapping into this zen like state when we were up there and I forgot about whatever problems I currently had back home, my brain knew this was a time to just have fun relax and talk shit at each other over a game of mario party.
I have so many good gaming memories from there and I finished a lot of my favorite games and series in that house.
In our early years there we played a lot of Halo 3 multiplayer and later on once I managed to convince Him into playing Nintendo games (via chloroform, rope and a copy of Mario Galaxy) we  began to play a shit ton of smash bros, mainly brawl before moving onto project M and smash 4.
On my first visit He was also trying to get me to play Gears of War which I convinced him into playing co-op and I actually think this was the game that made us grow a lot closer as friends, seriously playing gears co-op is an entirely different experience.
It was also there where I began to introduce him to The Legend of Zelda, we finished Skyward sword there before moving onto Majora's Mask(which ended up being one of his favorite games), playing that one was interesting, there was no internet in the house for the longest time so we actually had to*shock* figure out what to do ourselves, we've still missed a few sidequests such as the kafei one and we're currently replaying it 100%.
After this we moved onto Twilight Princess and Ocarina though we played the latter away from his nan's before finally playing the best one Wind Waker.
I also have good memories of playing Haunting Ground up there, one of my favorite horror games.
We got stuck for over 6 months due to missing a key, sometime through this period we found said key...then forgot, only figuring it out after I accidentally clicked on the door...a full minute of silence was had that day.
One of my best memories though has to be playing through Metal Gear Solid 4.
Now I had actually owned the game for a year after getting it for christmas with my ps3 and in my dumbass youth I played about 10 minutes and didn't get it, so I shut it off.....yeah I've got no idea why maybe I was playing something else at the time which I wanted to get back to haha.
Anyway I picked it up again a year later and played for about an hour before falling in love with it, I  brought it next time we went to his nan's and we pretty much played the entire thing in one go, we hadn't played the previous games so we had no clue what to make of the overall plot but it was intriguing anyway and we still found ourselves loving every moment.
We also had a simultaneous heart attack for a moment when the game jokingly asked for a second disk at shadow moses and the final boss fight will also be forever burned into my mind..we also finished that fight at 4-5 in the morning and didn't know about the infamous 30 minute cutscene XD.
After this I bought the entire series because I wanted to know just what in the flying fuck was going on and we ended up playing most of them at his grans, I mainly remember MGS3's the end boss battle and the final boss, that and getting our asses completely kicked at first due to the lack of 4's instant camo, we also started jumping in the box and running around with a Russian flag cameoed on our face saying yay Russia when spotted...I have no idea how that started haha.
He also introduced me to the glory that is Kingdom Hearts there, we played for about 12-15 hours straight on that one. 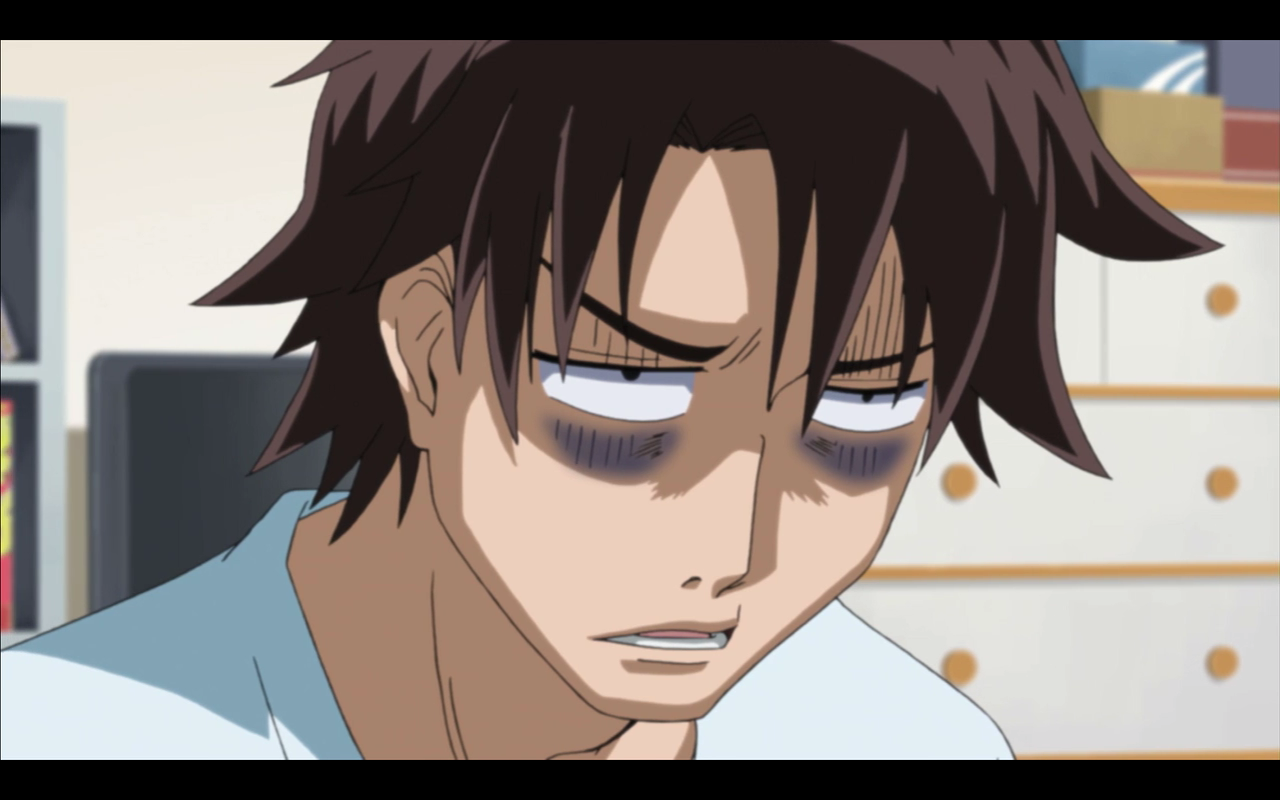 No rest,  GOTTA KEEP PLAYING.
Outside of gaming in the early years of being there we'd also sometimes go into the other living room that had a tv box or something like that, can't recall what it was.
Usually we'd watch South Park however there was one channel that used to play anime's, which was one of my first experiences with them outside of Elfen Lied.
Usually we ended up watching GITS out of order(Still need to finish that series), but on a few occasions we got to watch Cowboy Bebop, and like Metal Gear first time we saw it we turned it off after 5 min, not due to it being bad just due to disappointment that GITS wasn't on, it's funny how many of my favorite series I'd brushed off at first glance.
First time we saw it was the first episode while the second time was actually the godamn last 5 minutes of the entire series..yah, perfect timing,  we watched bebop a few more times there such as the awesome mushroom hunting episode before I went to HMV and bought the entire series which we binge watched.
I have no idea what happened to that channel, we wrote down the channel number and then lost it somehow, we dug up half the room looking for it then spent ages going through each and every channel trying to find it, I think it just shut down in between visits.
One of my favorite times to go there was Halloween which we made a habit of doing every year and I think that's one of the main reasons it became favorite holiday of the year.
Harry is the one who got me into the horror genre, first horror movie I watched with him being the silent hill one actually(shut up it's a good movie!).
We watched and played a ton of horror crap, I introduced him to Luigi's mansion there and I have awesome memories of getting through the resident evil series, we also watched the evil dead series as well as the amazing troll 2 watching that became a bit of a yearly classic for us, Halloween is still awesome but it hasn't felt the same since we stopped visiting.
Sadly all good things must come to an end, about 2 years after ending school his nan in her old age became a lot more reliant on having people around and had to move out and live with Harry and his family.
We went there one last time afterwards while his mum was trying to sort out the place for renting, we watched Guardians of the Galaxy at the cinema and played a shiton of Smash 4 and We Love Katamari which was our first experience with the series...time well spent if I do say so myself.
I feel like my time there helped shape the person I am today of course we could've played a lot of them games away from there but I feel the location and my connection to it made the experiences and my memories of it so much better.
While it's sometimes a bit saddening to me that I'll never be able to have the experience of going there again, I'll always have my memories and nostalgia of it and to quote my favorite doctor at his regeneration
"We all change, when you think about it, we're all different people all through our lives and thats ok that's good you've gotta keep moving so long as you remember all the people that you used to be". 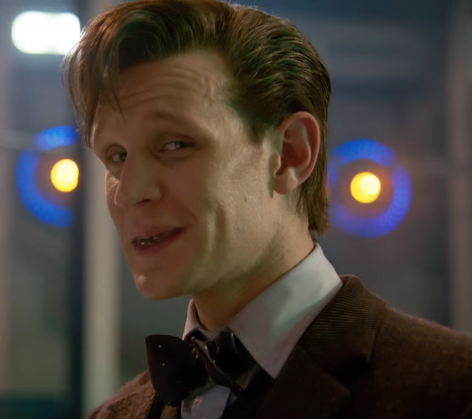 I couldn't get through a single personal blog without mentioning this glorious chinned bastard.
Anyway I hope you guys enjoyed this blog, I never usually write about myself so it felt a bit awkward writing this and I'm not sure of the quality of it but I hope you all found it a good read regardless :).