The Binding of Isaac: Antibirth Review

[Antibirth spoilers ahead, if you don't want anything spoiled in this DLC, begone!]

With Afterbirth+ on the horizon, mods and extra content is going to be abound for The Binding of Isaac: Rebirth very soon. However, the lack of official tools hasn’t stopped the modding community from working hard and creating a bunch of different add-ons for Rebirth, with the most substantial easily being the newly released Antibirth. Done by a 4 person team going by their reddit aliases; Kilburn, NotYourSagittarius, LeatherIceCream, and Mudleth have worked hard and long to bring this passion project to completion.

Much like the previously released Afterbirth, Antibirth is an expansion to The Binding of Isaac: Rebirth that adds a huge amount of content to the game, new items, new bosses, new characters, and an entirely new path through the game. Not everything that is added to it hits oil, but so much of it is so interesting and fun that it definitely justifies giving it a shot, even with Afterbirth+ just a few short days away. Just as a bit of info, installing Antibirth requires uninstalling Afterbirth, since it's not currently compatible.

A Lot of Character

I’ll start with the new characters, Bethany and Jacob, both of which add very unique and interesting twists on the game. Bethany’s unique gimmick is that she cannot gain soul or black hearts as actual HP, instead she hoards them to be used for battery charges on active items. Her starting active item, Book of Virtues, really gives the character an identity that makes her play differently than other characters. You sure could just drop it for another active item, but her playstyle is so suited to its use, and she becomes such a visual spectacle when at its fullest that I personally have never dropped it in all my time using her. How it works is it summons a blue fire orbital every time it's used, up to 16 total. This becomes both a big offensive and defensive force, since the fire orbitals shoot tears at a slow rate, and block up to 2 shots before disappearing. Bethany takes a while to set up, but once she does, you won't even notice that you can't get soul hearts as HP, since you won't be getting hit anyway. 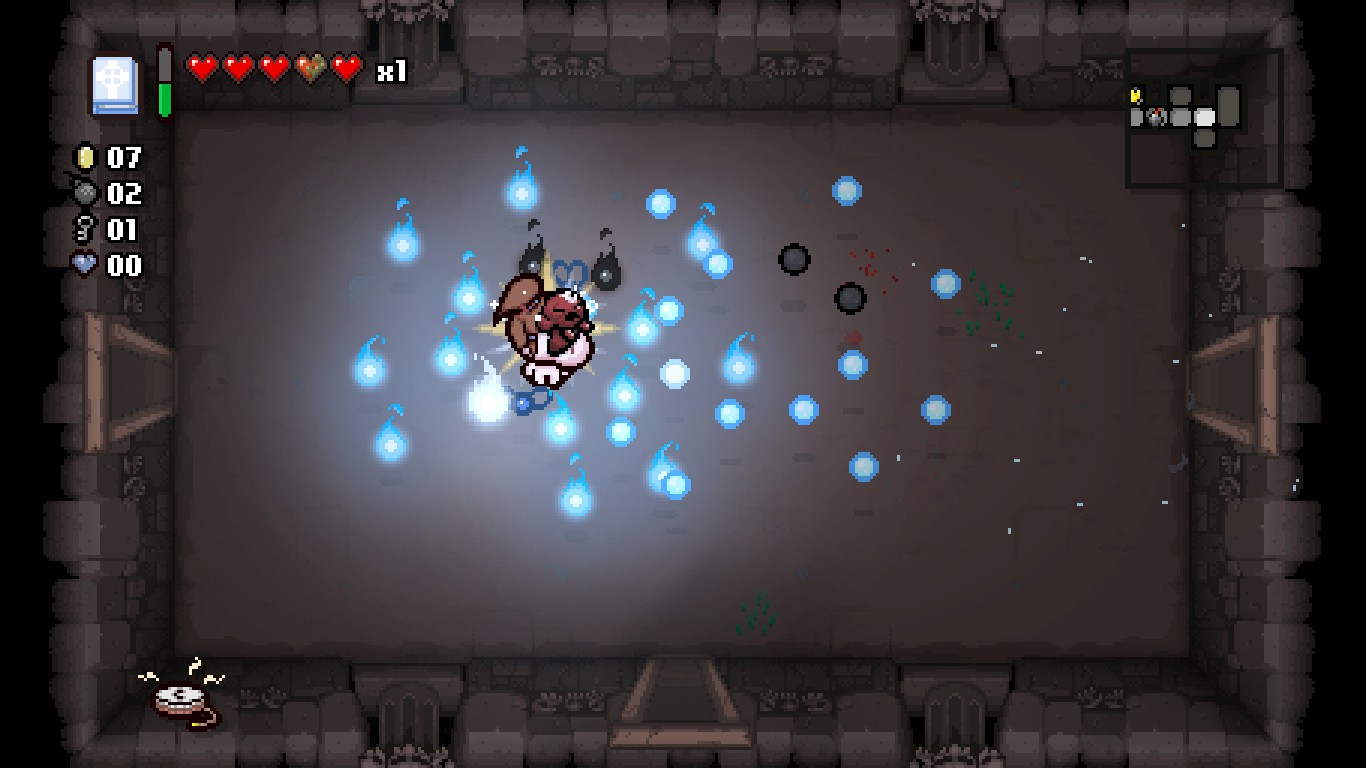 Bethany gets to be pretty flashy

Jacob, or should I say, Jacob and Esau, have a different gimmick to them. They’re actually two separate characters that the player has to guide through the basement and beyond together. They register the same inputs, and thankfully share a speed stat so they can easily be wrangled up together, but they can be a nightmare to keep alive throughout the game. Aside from speed, the two don’t share any items or stats, and you have to keep them both alive or they both die. This becomes a bit more of an issue with the UI, Jacob’s HP and active item being on the top left of the screen, whereas Esau has his stored on the bottom right of the screen. While not game breaking by any means, it can be a bit of an annoyance. Jacob and Esau’s gimmick also unfortunately means that any pickups like cards or pills get automatically used whether you want them to or not, so no saving anything for later, and no dropping bad pills if you accidentally run in to them. There is a third character planned, Edith, but she’s currently not in the mod as the team wasn’t able to balance her and make her fun at the same time. Maybe later? 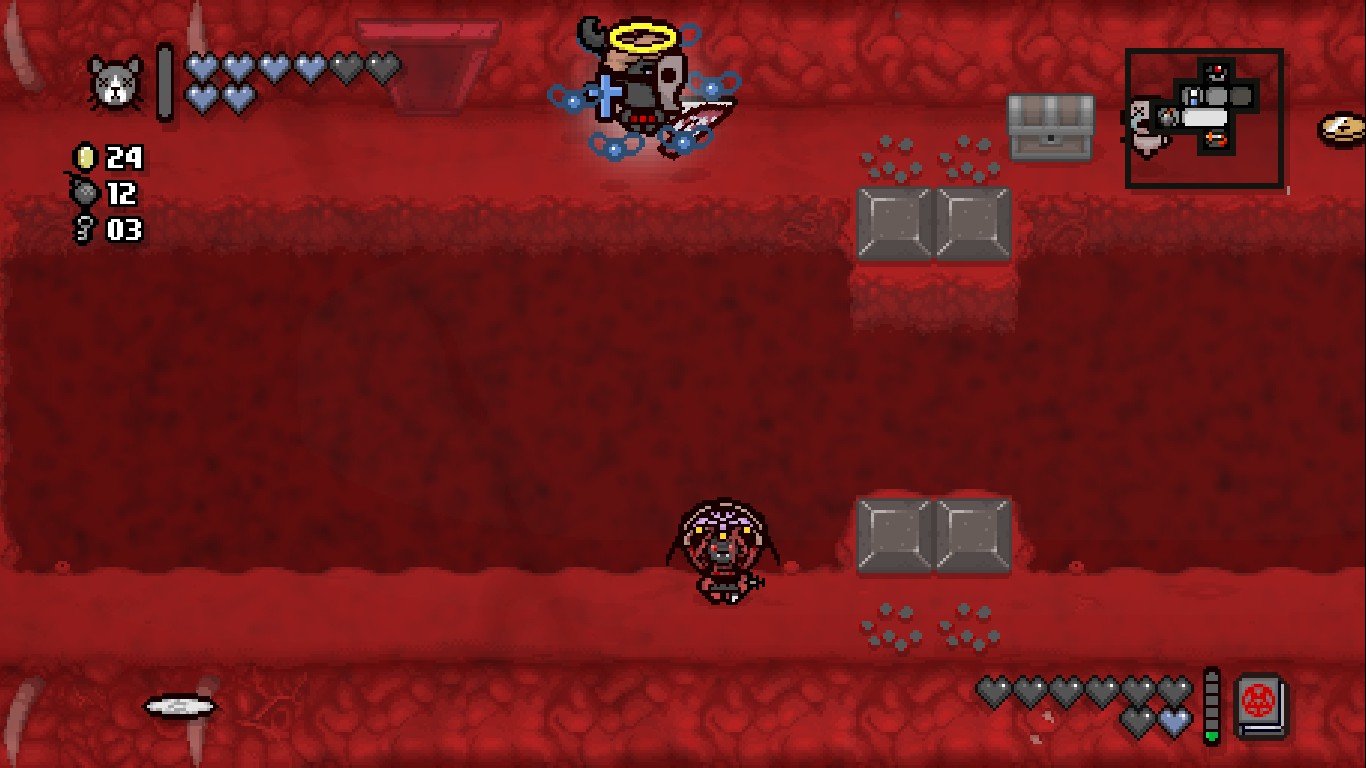 Pshh, controlling 1 character is so 2015

Just as an aside, Antibirth also changes up how co-op works in Rebirth. Instead of one player using a full character and the second player being relegated to an ineffectual baby, you can now go through the game with two individual characters, and be forced to share items with your soon-to-be-former friend. I would go into more detail about this, but I haven’t had a chance to try out the co-op myself.

The new items added into the game are almost all fantastic, and I’d love to gush about so many of them for so long, since they both add new variety to the game and fix a lot of issues I’ve had with base Rebirth for a while. Some of these items were first introduced in the Community Remix, but the majority are newly created for Antibirth specifically. I won’t talk about all of them, since there’s almost a hundred, but I’ll point out a few in particular which really tickle my fancy. First and foremost, my favourite item in Antibirth is Jacob’s Ladder. This item is simple; it spawns a ladder to the Angel room in Isaac’s spawn room on every floor including the floor Isaac picked it up. Unlike Goat Head, this also includes the Cathedral and Chest. This is a guaranteed spawn as well, so there’s no chance of losing it if you take damage or blow up a beggar. The Angel room pool has been expanded and improved in Antibirth, including variants with 3 items to choose from, and an item that guarantees them is something I’ve always wanted in Isaac, but never got officially.

The second, in the “Oh my god that’s horrifying” category, is The Intruder. Mechanically, this item grants additional quad shot which shoots slower than your normal tear rate, and upon taking some damage, spawns a familiar that leaps at enemies and spawns some blue spiders. Visually, Isaac’s entire face is removed and replaced by a spider which has taken shelter in his head, and bursts out upon taking damage. That’s so gross it’s amazing. Antibirth also adds new trinkets and consumables, which are not game changing at all, but are usually nice additions. They’ve even added in a new item pool, the planetarium pool, which is really cool, but will likely be missed by many players as the chances of getting them are very low and require certain things before they start to spawn. 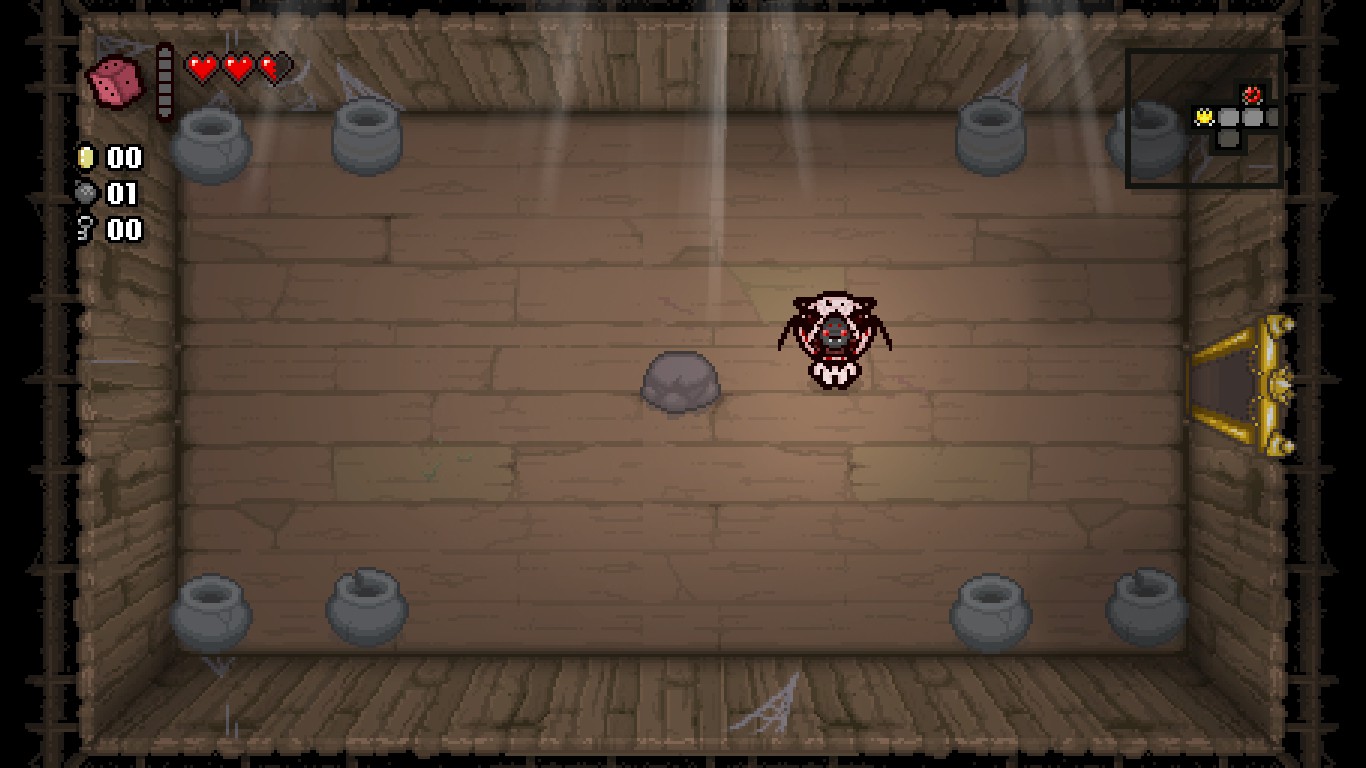 A face not even a Mom can love

The new alternate path is one of the largest additions to the game, and adds a huge amount of replayability. There are four new chapters, three of which add new mechanics and ideas, and really add a lot of variety to the game. For instance, the first chapter, Downpour, adds water that some enemies can slide on and hurt Isaac even over pits, and enemies that can only be seen by their reflections. The other two have unique gimmicks too, but going into them in detail would be way too long, I’ll just say that they each feel super unique and nothing seems tacked on. These are all welcome additions to the game, and if you want to see most of the new bosses, you have to go through this path. There’s also another secret on this path but I won’t spoil that one at all. 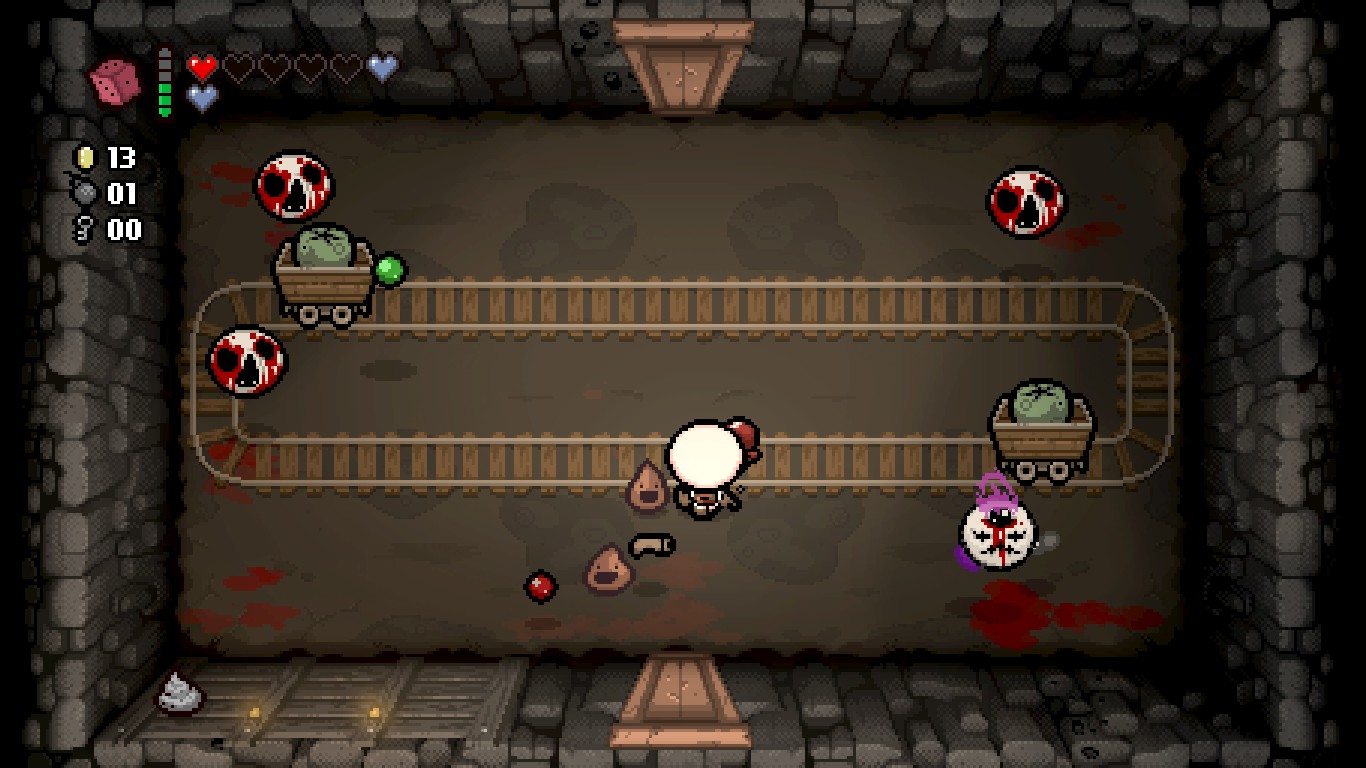 Speaking of bosses, Antibirth adds more than a dozen new bosses to the game, and on the whole they are pretty great. Some of them are different variants of existing bosses, such as The Visage being a posthumous version of The Mask of Infamy, and Beelzebub basically being just an alternative form of the Duke of Flies, but they certainly aren’t all so simple. I won’t spoil most of them, since many of them are very well done and are excellent additions to the game, but there are a few bosses that annoy more than anything, and could use some changing.  (Inb4 git gud)

For instance, there’s a boss that can appear on the first floor of the alternate path, Wormwood. It’s a worm boss that can do a few things that are quite frustrating. It can destroy blocks in the boss arena, which can block access to any doors that are in that room. It is not common to happen, but it can, which is definitely frustrating. It can also change its attack patterns while still in the animations for previous ones, which needs some changing. Lastly, it has an attack where it charges out from a wall at the player at great speed, which the player often doesn’t have time to react to before getting hit. This wouldn’t be as much of an issue, but there’s no way to know where the boss will appear before it does. That’s definitely the worst offender in terms of boss imbalance in terms of design, but there are others as well. That all being said, it’s still a joy to fight all the new bosses, I really missed seeing a new “Vs” screen and not knowing what was going to happen next, and Antibirth gave me more than my fair share of that. 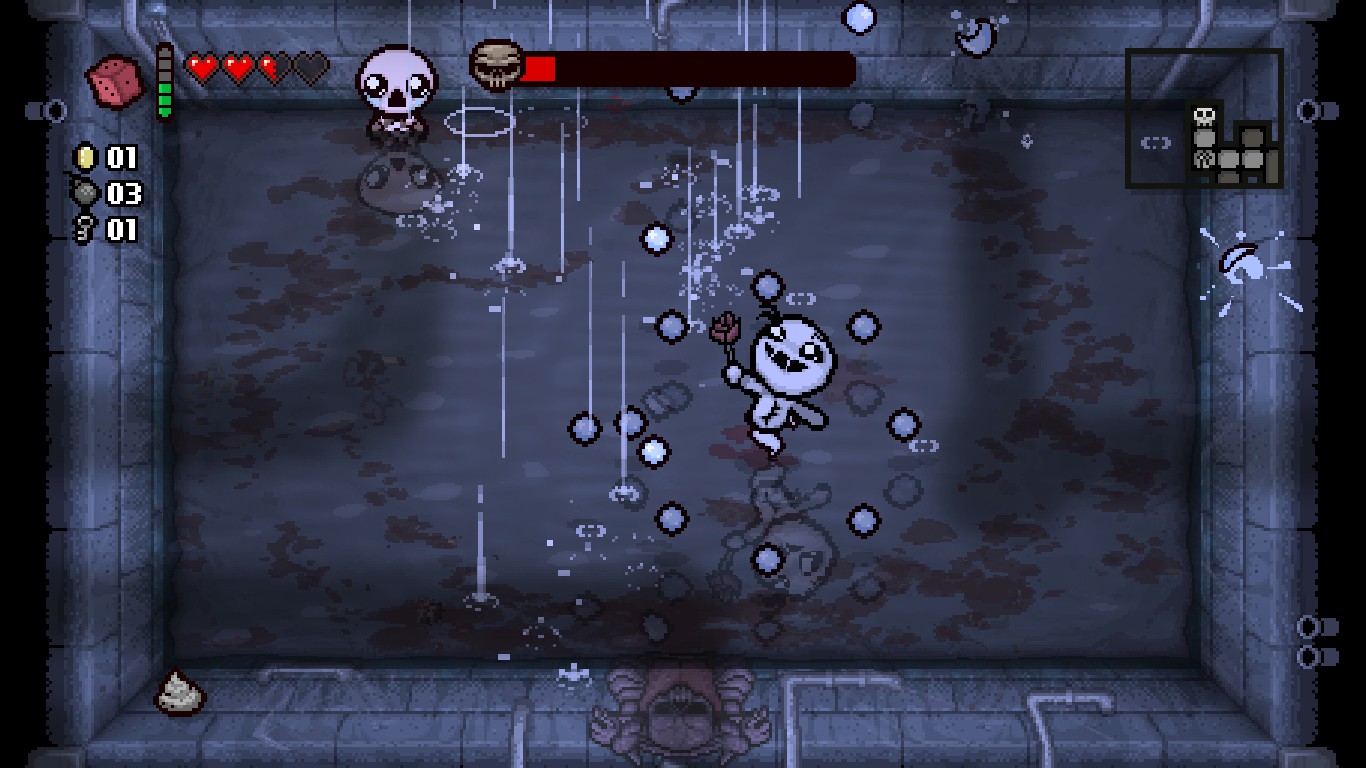 A flower for the soon departed

I’d be remiss if I didn’t bring up the remixed soundtrack, which is wonderful. It has a feel much more reminiscent of Danny Baranowsky’s soundtrack from the original Binding of Isaac. Mudleth uses more traditional videogame soundscapes and manages to be more sonically varied and far more subtle than Ridiculon’s more choral and guitar dominant work. As much as I do like Ridiculon’s work in Rebirth, Afterbirth, and presumably Afterbirth+, the style in it can get fairly one-note and it’s nice to hear a new take on Isaac’s sound. If you don't like the remixed tracks, the team have done you a nice favour and let you change back to the original OST (new content excluded) in the menu.

The new basement theme is great

I overall really love what the team did with Antibirth. It has its faults, to be sure, but they are things that can be easily fixed in the future or could even be removed in porting to Afterbirth+ when that releases. The team truly loves Rebirth and wanted it to be better, and it shows. Every aspect of this mod just oozes passion and I truly hope they are rewarded for their hard work in the present and in the future. If you own The Binding of Isaac: Rebirth, you are doing yourself a disservice by not installing and playing Antibirth, it's one of the best releases of 2016.