Drowning in Puzzles with Aqua Cube 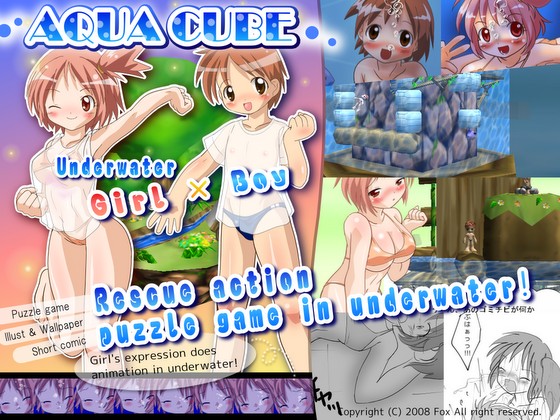 Most Japanese indie games haven't been prevalent in the industry over the last decade. A growing Steam presence is starting to bring many of these games to light, but plenty have yet to make the transition. Until recently, they were almost exclusively created for low-print runs at Japanese conventions or, in the cases of digital distribution, shoved in the obscure corners of the internet. This includes Aqua Cube, a cute puzzle platformer released for PC back in 2008.

Developed by FoxEye, Aqua Cube deals with the raising and lowering of water levels to solve puzzles. The player jumps over gaps, pushes blocks and hits switches while navigating the outer faces of a cube. Once they locate a key, they can free their imprisoned sibling. 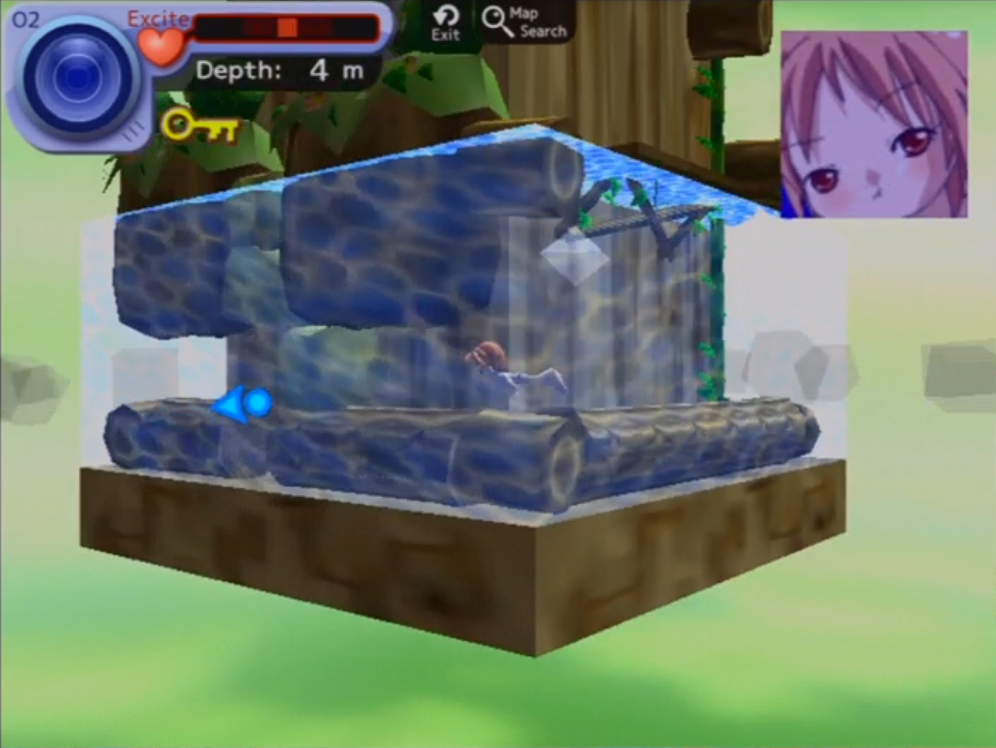 Although some stages' initial water level can't be influenced, frequently there will be rhombus shaped objects that will adjust the depth when touched. Adjusting the water moves components of the puzzle or lets the player access new areas. Probably the easiest comparison is Super Mario 64's Wet-Dry World blown out into an entire game, but there are plenty of titles that have played with this idea.

Where Aqua Cube starts to differentiate itself is with the effects of lowering and raising the water on each element of the stage. First and foremost: technically there's no overall timer to solve each puzzle. Instead, your sibling is imprisoned within a cage or latched to the wall. When the water raises above their head, they're no longer able to breathe. Resurfacing them or sharing some of the player character's own oxygen extends their survivability. It's essentially a timer that can be manipulated or, in some cases, turned off entirely.

Flooding an area transforms it. Soft yellow blocks float, solid rocks sink, fans that are ineffective on land will create underwater currents, and enemies will become hostile. Most importantly: switches can be activated or deactivated by raising and lowering blocks. There can be multiple depths available per level, each of which changes how the player navigates the cube. 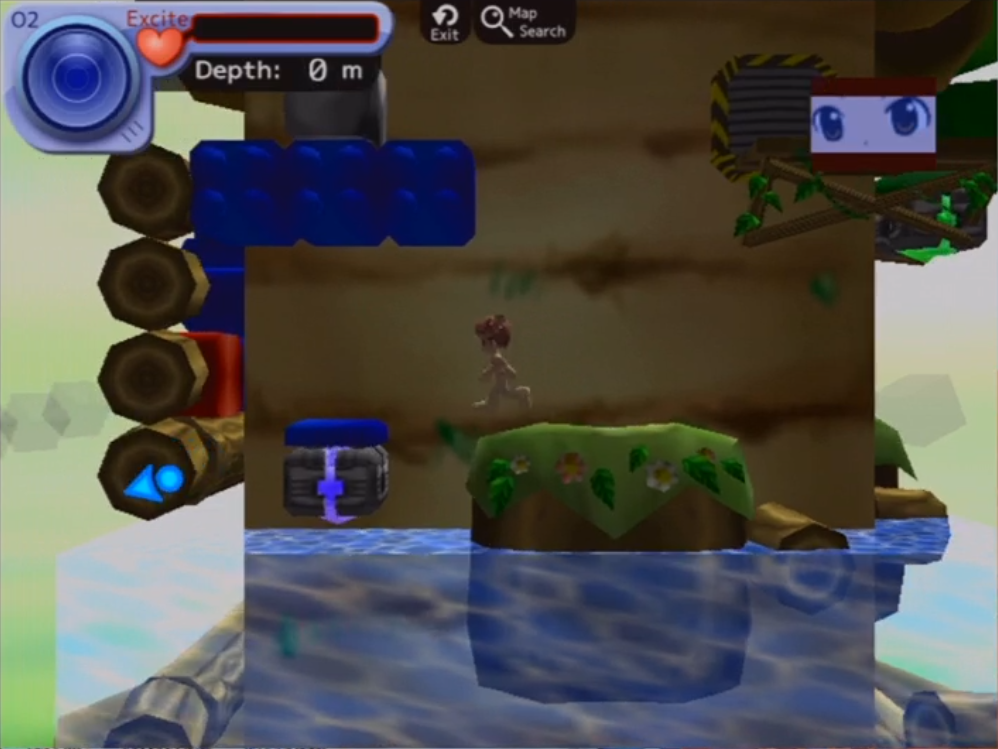 The latter half of the game is essentially about finding the order of which you should adjust the water, move blocks and press switches, resulting in a lot of trial and error to find the final path. It can be convoluted, though it's satisfying having each piece of the solution fall into place. Once you've mapped out a puzzle, it's a fast paced game thanks to a quick restart, compact design and the looming threat of drowning.

Executing solutions in a timely manner before your sibling asphyxiates, while also managing your own oxygen, plays a big role. A few later stages require near perfect runs to succeed. A handful of puzzles are available at any moment, so it's easy to switch around for a change of pace if your murderous frustration grows too great.

Action oriented levels adds some variety, however the odd control scheme can be unreliable for these more intense events. Despite being half a platformer, the entire game is controlled via the mouse. Moving the cursor away from the center of the screen will determine the direction the character will move. Placing the mouse in the middle puts them at rest, and the only other input required is clicking the right mouse button to jump, enter tunnels or climb ledges. 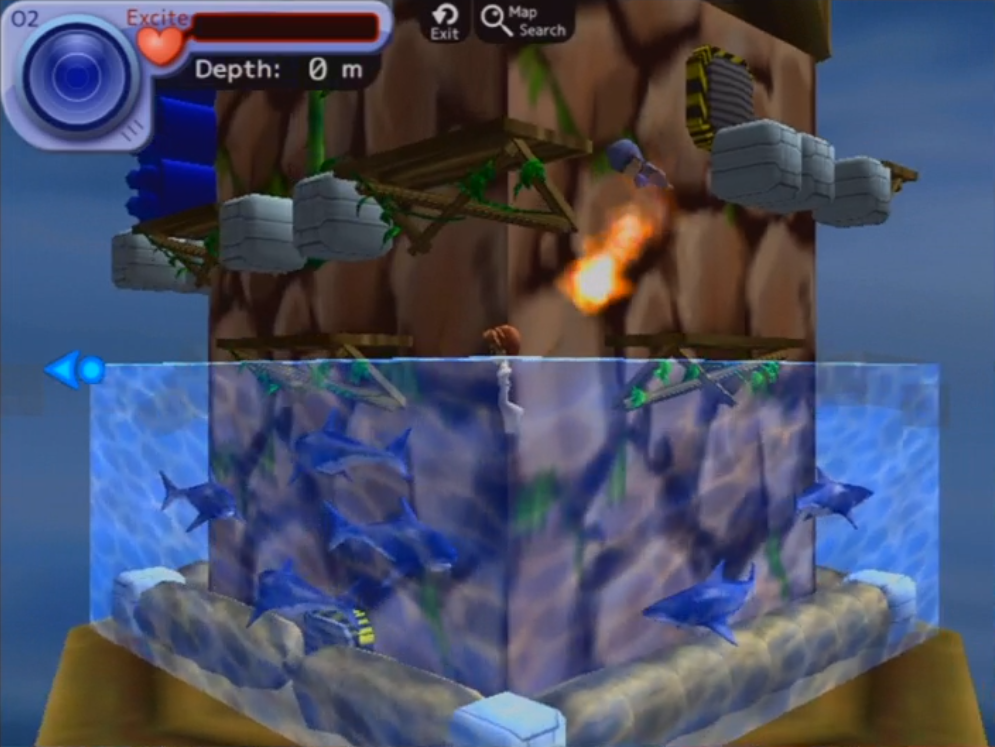 It's an unconventional control scheme, seeming more like something you'd expect out of an experimental Wii pointer-controlled game. The developers pitches it as a bonus – that it's so simple you can play with one hand. It works. It's just not particularly accurate or comfortable, especially when trying to perform precise movements. I often found myself restarting after accidentally walking off a cliff or pushing a block a bit too far.

A side note, as I assume most don't know about FoxEye: they makes a variety of different games all with an underwater theme. Many are drastically different mechanically, yet there's also a familiarity between them. Swimming and oxygen management plays a key role in each game. Aqua Cube carries the tradition as the drowning mechanic makes it a deceptively stressful game hidden under its cheery music, cute characters and colorful visuals. It's hard not to get an adrenaline rush when surfacing with barely a pixel of oxygen left, or trying to reach your sibling as they struggle in their bindings as a last ditch effort to stay alive.

While nothing pornographic, drowning FoxEye's games is a bit glorified in a way that might make some uncomfortable. There might be a reason it's a one handed control scheme... oh, baby! I'm joking. I'd be impressed if you could get off while solving the puzzles in Aqua Cube. In the end, it's still just drowning – a frequent cause of death in a lot of video games. The brother's lower bits are also always happily creeping up his swimsuit. It's less offensive and more of just a rare sight. 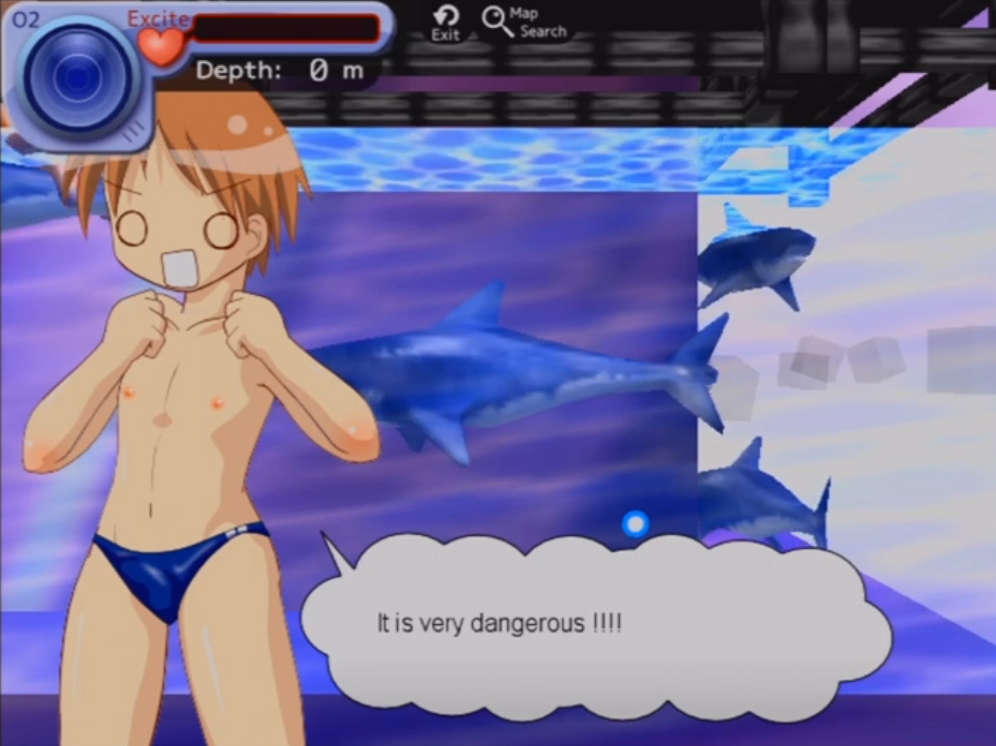 The dialog is poorly translated, and not in a “ho ho ho, we faked a 80s/early 90s localization” kind of way. It's likely just some Japanese guy probably trying his best. There's no deep story or any puzzles based around text, so it mainly just comes off as goofy and awkward.

Impressively, an ongoing story thread about the brother having a sister complex is worked into the gameplay. Each character has an “excite” meter. What this does is essentially says how much oxygen the character's body is currently consuming. The higher the excite, the faster the oxygen drain. This meter normally goes up from the player performing physical actions: pushing, jumping, swimming, etc.

When the brother is being held captive, he gets “excited” from getting mouth to mouth from his sister, increasing his oxygen consumption. This creates a major change in strategy as he can't have his oxygen effectively replenished. His sister can save him in the final moments, but he will only last a handful of seconds before drowning. Planning in advance to get him to the surface as soon as possible becomes a huge concern in the latter sections.

It's silly that essentially a kid getting an erection has a role in gameplay, but it's actually a nice touch. I don't think enough games play with what sexuality can mean to their mechanics. It's usually reserved for fan service or humor. 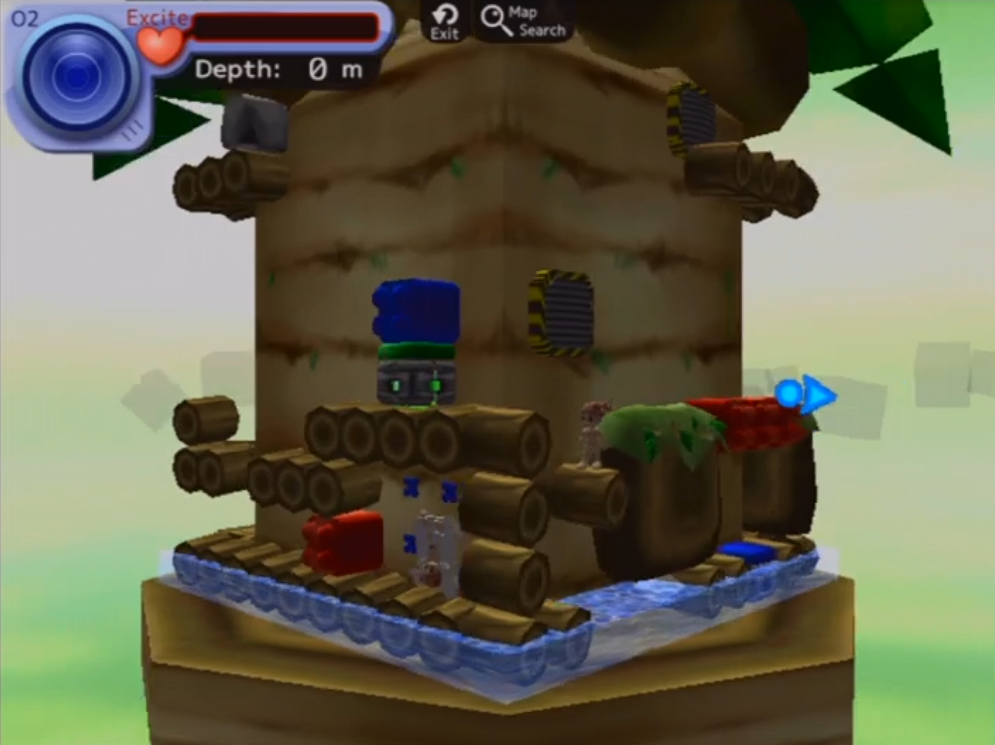 Aqua Cube is nothing revolutionary, but it seems a shame that it has less than 400 downloads between both the English and Japanese versions on its primary distribution platform, DLSite. As an entire game based around clockwork levels that shift with the raising and lowering water depths, it has a unique flair that is complimented by FoxEye's disquieting design around water.

DLSite can be a bit weird to navigate, so I'll point you directly to the store page for Aqua Cube: right over here. It should be noted that this title has some hefty DRM protection on it. So, don't plan on taking screenshots or video unless you run an HDMI cable out of your PC, into a capture card that splits back into your PC. Because 2008's future of video games is here™.