When we look back fondly to the 90s and early 2000s we remember beloved titles like Quake, Doom and Deus Ex. What we may not remember are the slapdash, shoddy and rushed ports of these games to console that failed to do the originals justice. Or so many of us thought.

Don't get me wrong, many of these games were forced onto consoles that were incapable of handling them, but there are a few titles that had console versions that did the originals some justice. At the very least, the ability to play some of these games on a Playstation or other consoles is an impressive feat, and I think it's worth looking at some of the best, worst and weirdest ports of classic PC games.

The thudding ambiance, the devastation and the cold loneliness of Quake made for maddening and desperate gunfights, and while Id Software's games live on as classics, I find the original Quake has been subtly forgotten. It's been overshadowed by its multiplayer brethren and the sci-fi aesthetic of its sequel.

If anyone wishes to experience Quake, the N64 port may be your choice. While it is missing a handful of levels, Quake did made its way to Nintendo's first 3D console. 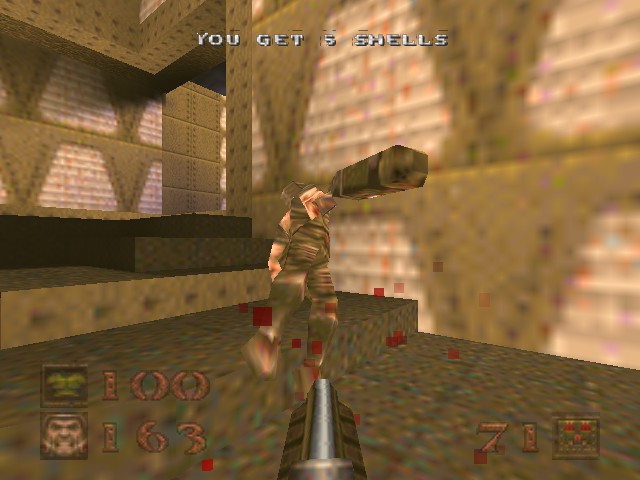 For a console remembered for its shooters, Quake 64 is seemingly forgotten.

The N64 version is contains the same weapons and enemies of the PC version, but did have some changes. Notably the soundtrack by Trent Reznor was replaced by Audrey Hodges', who also did the soundtrack for Doom on the PS1 and N64 (more on that later).

The game also had an interested aesthetic. It's a sort-of blend between classic Quake and GLQuake, with the N64's texture smoothing almost benefitting Quake's textures. Mysteriously, Quake 64 is also one of the few N64 games that gives players the option of turning this filter off, giving textures the more grainy look of the original.

While the game runs pretty well, given the hardware, the real problem is the controls. Thankfully the game has fully rebindable buttons, which is the control's only saving grace. Still, hitting Slimes with an N64 controller is troublesome, and higher difficulties are almost impossible without the higher accuracy of a mouse. Enemies seemingly have larger hit-boxes to make up for this, and while it helps, it doesn't mitigate that the N64 controller wasn't meant for this style of game. More generous hit-boxes, or even aim assist, would have better benefitted this version of Quake.

One of the greatest first-person shooters of all time, Doom has cemented itself as a cornerstone of the first-person genre and 3D gaming. Despite the PC version being the original and go-to version of the game, there exist numerous console ports.

Sega 32X and SNES ports both exist, and there is also an N64 sequel to Doom 2. However, the most interesting port, in my opinion, is the Playstation 1 version of Doom. 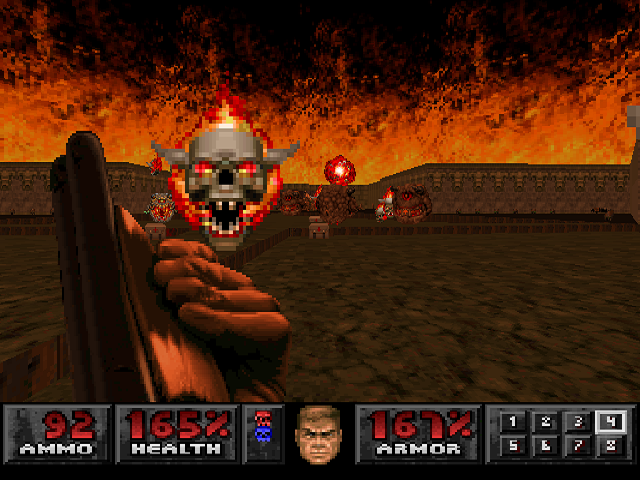 Playstation Doom sports a darker UI, so you know it's cooler.

Doom, subtitled The Custom Playstation Edition, claims on the back of the box that John Romero says it is the best version of Doom yet. With that kind of recommendation, what could possibly go wrong?

Not as much as you'd think, surprisingly. Playstation Doom contained The Ultimate Doom and Doom 2, though both versions are more like abridged copies of their original selves.

Doom is missing almost the entire third episode, including the battle with the Spider Mastermind. Instead after beating the Cyberdemon you go straight into "Episode 4 - Thy Flesh Consumed." Additionally Playstation Doom's levels make a number of concessions to make it easier on the hardware. Ceilings are lower, complex geometry has been simplified, and some of the larger levels are completely absent.

Still, if you don't mind some notable portions missing, Doom is here. I actually don't mind the shorter experience, and while I wouldn't consider it a replacement for the original Doom, I do consider this an alternate version, especially given its different tone.

Audrey Hodges also did the soundtrack for Playstation Doom, and while his more horrorific tracks felt appropriate for Quake, in Doom they create something a lot more terrifying.

Doom took a lot of inspiration from horror flicks, but it never felt like a horror game thanks to the MIDI metal songs. With Hodges' replacement track Doom becomes a bit more scary. The tone of the whole game becomes darker and more oppressive.

While I wouldn't recommend anybody throw out their old copies of Doom or uninstall the Gog versions, PS1 Doom might be worth a try to old Doom fans looking for a new experience.

Given Nintendo's more childish demeanour and appeal, I'm honestly a little bit surprised Duke Nukem 3D was able to be released on the N64. Granted Nintendo has never been outright against M-rated titles appearing on their console. Shadowman was the system's first mature title, and the Wii would go on to host Madworld and No More Heroes, both of which became cult classics.

But Duke Nukem couldn't make it onto the N64 without sacrificing something... Duke-ish. Strippers no longer appear and a lot of the childish humour is gone. Which is fine if you never thought Duke Nukem was funny. I didn't.

Still, the charm of Duke Nukem was his casually referencing 80s and 90s action movies and mimicking their violence, one-liners and sexism. While some of that's still here, it's definitely toned down. 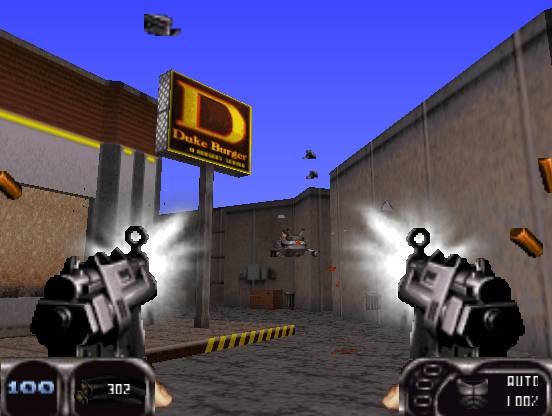 Duke Nukem 64 makes a number of interesting changes to the original. Some levels have been slightly altered, and a few weapons have been outright replaced. Duke can now use dual machine-pistols and a grenade launcher, and his entire arsenal has been redrawn.

The N64 version has two weaknesses though. 1) The controls are abyssmal. 2) There's no music or ambiant soundtrack.

It seems the N64 cartridge couldn't handle the space to fit the entirety of Duke's 3D adventure, and so the designers were forced to make a choice. Do they cut Duke's signature one-liners or the entire soundtrack? They couldn't deal with losing one of Duke's most important traits, and so the whole game is in absolute silence, with only the sounds of combat filling the void.

It's jarring, especially since the main menu plays Duke Nukem's rocking theme, but then goes straight into level one with defeaning silence.

I find it shocking that Deus Ex was even able to run on the Playstation 2. That's not because Deus Ex was a huge graphical power-house, but because of how expansive the environments were with very little loading screens separating them.

Well, that didn't last on the PS2. 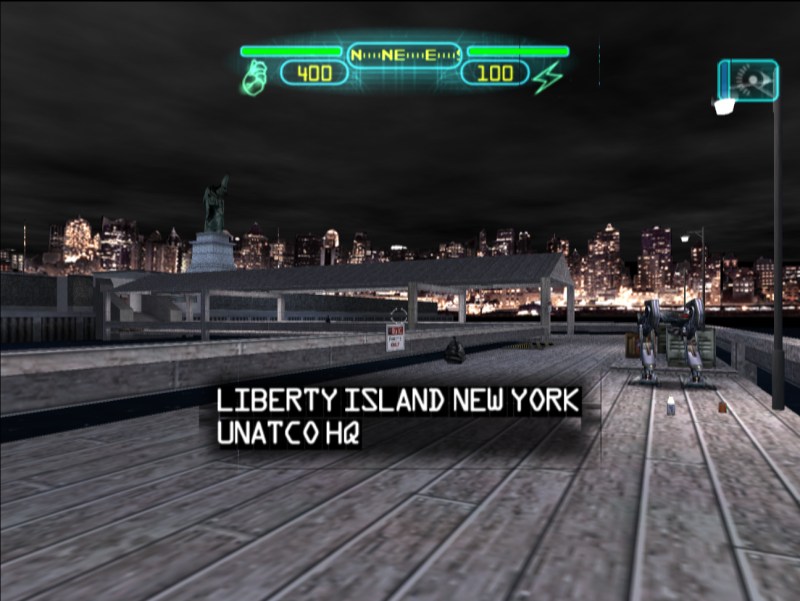 If you ever wanted to play a bastardized console port of one of the greatest PC games, now's your chance.

Deus Ex: The Conspiracy is the PS2 port of the original PC game. The entire game is here, with no levels cut from the original, which may actually be a missed opportunity here, since I think Deus Ex is just a tad too long for its own good.

What breaks the experience is that the game isn't as vast as the original version. Wider areas are noticeably more narrow and loading zones separate bigger areas of the game. On Liberty Island alone, the game's opening mission which frames the gameplay for the entire game, has no less than five loading screens. Loading doesn't take too long, about thirty seconds, but it's just long enough to slow down the experience. When walking around through the game's hub environments, exploration ends up taking way longer than necessary.

It also doesn't help than individual limb damage is replaced by a singular health bar, and items were no longer stored in a grid but you could store up to 15 of any item in the game, with a limit of any four firearms and you could possess every melee weapon. Needless to say, getting rid of one of the most immersive elements of the game, the fact that you had to choose which items to keep in your physical inventory space, is a huge loss. This was a number of years before Resident Evil 4 showed grid-based inventories on consoles could work, so I imagine from a developer's standpoint they probably thought it would have been too difficult to navigate with a controller.

The framerate is also crap in areas with more than a new NPCs and some areas contain far fewer characters than normal. The battle for New York becomes more like a mild-scuffle. Even with these compromises the game still only runs at the bare-minimum necessary to be considered playable.

Still, the very fact this game managed to make it onto consoles is impressive, even if they had to ruin the game's core values to get there.

Nowadays PC games generally release alonside their console versions, and while not all versions are treated with the same care, you can expect all three versions to run generally the same. While the PC versions will almost always run better, given they can run on better hardware, the console versions probably won't receive rushed ports. In fact, recently it's been the other way around.

But as we've seen so far, the console has received some poorer quality, but still impressive, versions of classic PC games. Half-Life, on the other hand, is actually pretty fantastic. 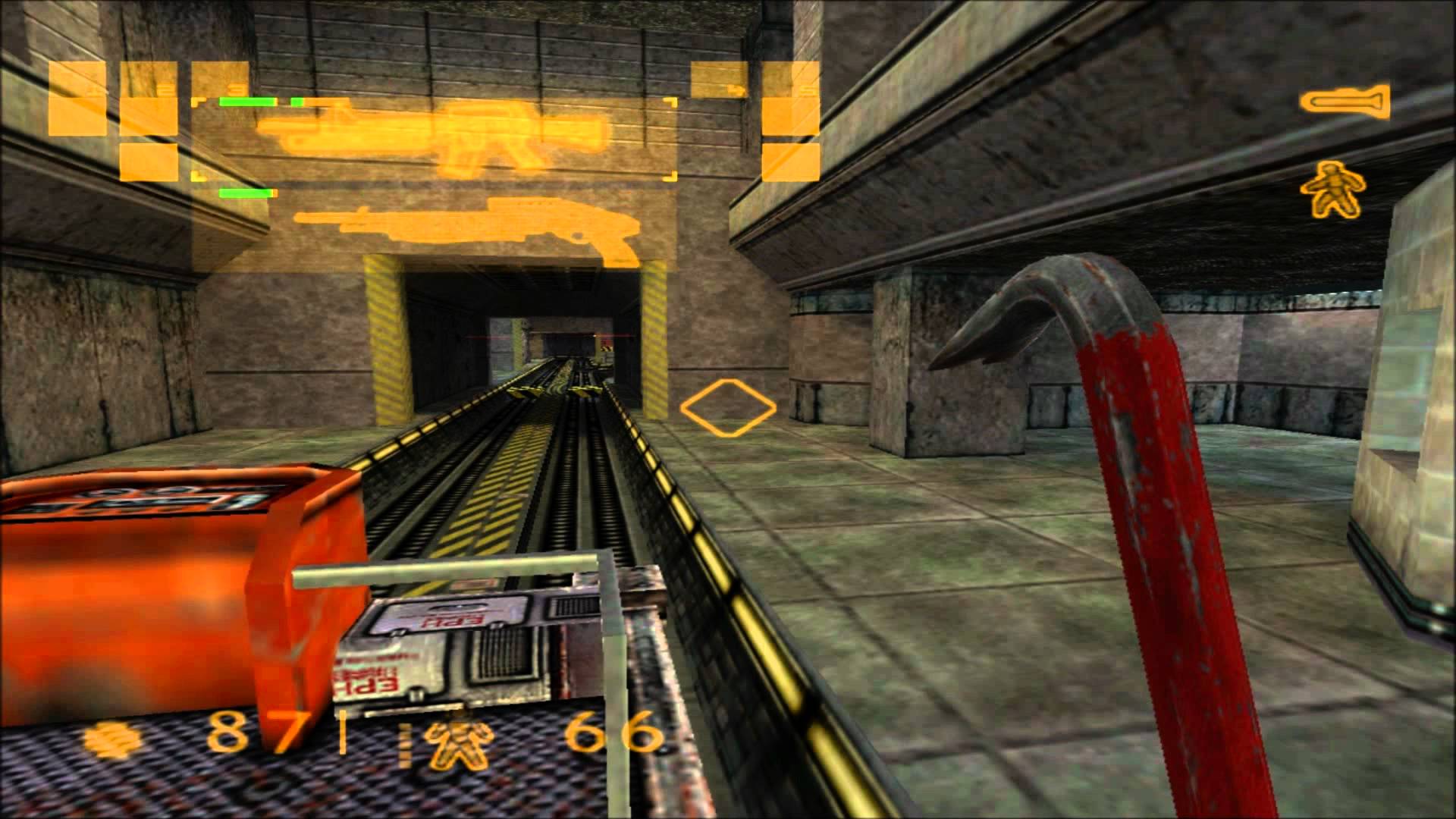 Some bulkier UI is probably the most glaring difference, but otherwise PS2's Half-Life is a faithrful port.

Using the HD model-pack from the unfinished Dreamcast port, the PS2 version of Half-Life runs surprisingly well. It aims for 30fps and meets that goal most of the time, slowing down ocassionally for intense gunfights. But considering Deus Ex barely managed to scrape double-digit frames out of some areas, I'll take some slowdown if I need to.

Some areas actually have more detail than the original PC version. Some of the rockier areas are a bit more fleshed out, and the models for the medical dispencer and suit recharger aren't just flat-animated textures, but have arms which reach out to you and liquids that drain. They're only little touches, but they stand out.

Additionally, anticipating that controllers wouldn't have the full accuracy of a mouse and keyboard, the developers added a lock-on feature to make it easier to hit enemies. Honestly, I rarely used it since aiming with a controller is still pretty solid, but that feature is there for some of the trickier moments.

I could go on regarding the console ports of Quake 2 and 3, as well as the different versions of Half-Life 2, but I think I'll stop here. Again, not all of these versions are necessarily better than the originals, but they all offer something different that fans of these games may want to experience. As a collector of console games, I think it's worth possessing these, since many hardcore fans don't even know they exist, and these still may be the only versions available for some people.