Here it is, fellas. One of the most hyped anime this year. It was so hyped, almost everyone in my former college anime club keep sharing the trailers on Facebook months ago. I, however, wasn't too fazed by it. When I watched the trailers, I was like, "What's with these kids shouting about? What's with the meteors? What the hell is that explosion? Is Michael Bay now in the anime business?" Granted, I didn't know who Makoto Shinkai is and what's his previous films are until I looked it up on Wikipedia yesterday after viewing. I didn't even know about the plot until a few days before deciding to watch it. Back then, you could lied to me that it's a Japanese spin-off about Halo or Titanfall, purely because of the colourful meteor footages, and I would just eat it up. And then recently, a lot of reviewers singing praises for it. Empire Magazine, Chris Stuckmann. Heck, even Mark Kermode, of all people said he really loved the film, which is saying something for one of the harshest critics in the UK. Even better, it has dominated the Japanese box office for months and beaten most of Studio Ghibli's film, bar Spirited Away, in Japan's highest grossing films list, and at this time of writing, entered the top 5 rank.

Now that I've seen it, was it worth the hype? Will it able to be nominated into the Academy Award, and nab a second Oscar on Best Animated Short Film for Japan? And what's with the fucking meteors being prominent throughout the trailers? Is this the new Armageddon or something? Will Aerosmith performing for a film again?

In the fictional town of Itomori with a beautiful lake beside it, we first follow a local high-school girl, Miyamizu Mitsuha, and follow her through her daily life. We found out that she was bored of rural life. She isn't happy being in the family shrine business. She isn't happy that her father is a really salty mayor who hates traditions and stuffs. And she certainly doesn't like being a miko who create sake in a traditional way that totally did not remind viewers of anything. In short, she didn't take the "You didn't choose the rural life. The rural life choose you." thing too well, and one day, she loudly wishes to be ressurected as a handsome bloke living in the cyberpunk city of Tokyo.

Which she did, sort of. Then one day, she woke up and found out that she has switched bodies with some high-school bloke named Tachibana Taki, who predictably is a short-tempered kid with a golden heart. As both of them leaves messages to communicate with each other after every body-swap, Mitsuha enjoyed being Taki as she experiencing life in Tokyo, while Taki himself bring some much needed humor to Itomori as Mitsuha. But the tone then takes a sudden turn when their body-swapping phenomenons were somehow linked to a meteor that is currently flying around Earth (SPOILERS: It's not Jack Cooper nor BT-7274 inside that meteor), and it turns out that Mitsuha's wishes came true for a greater, mythical purpose. 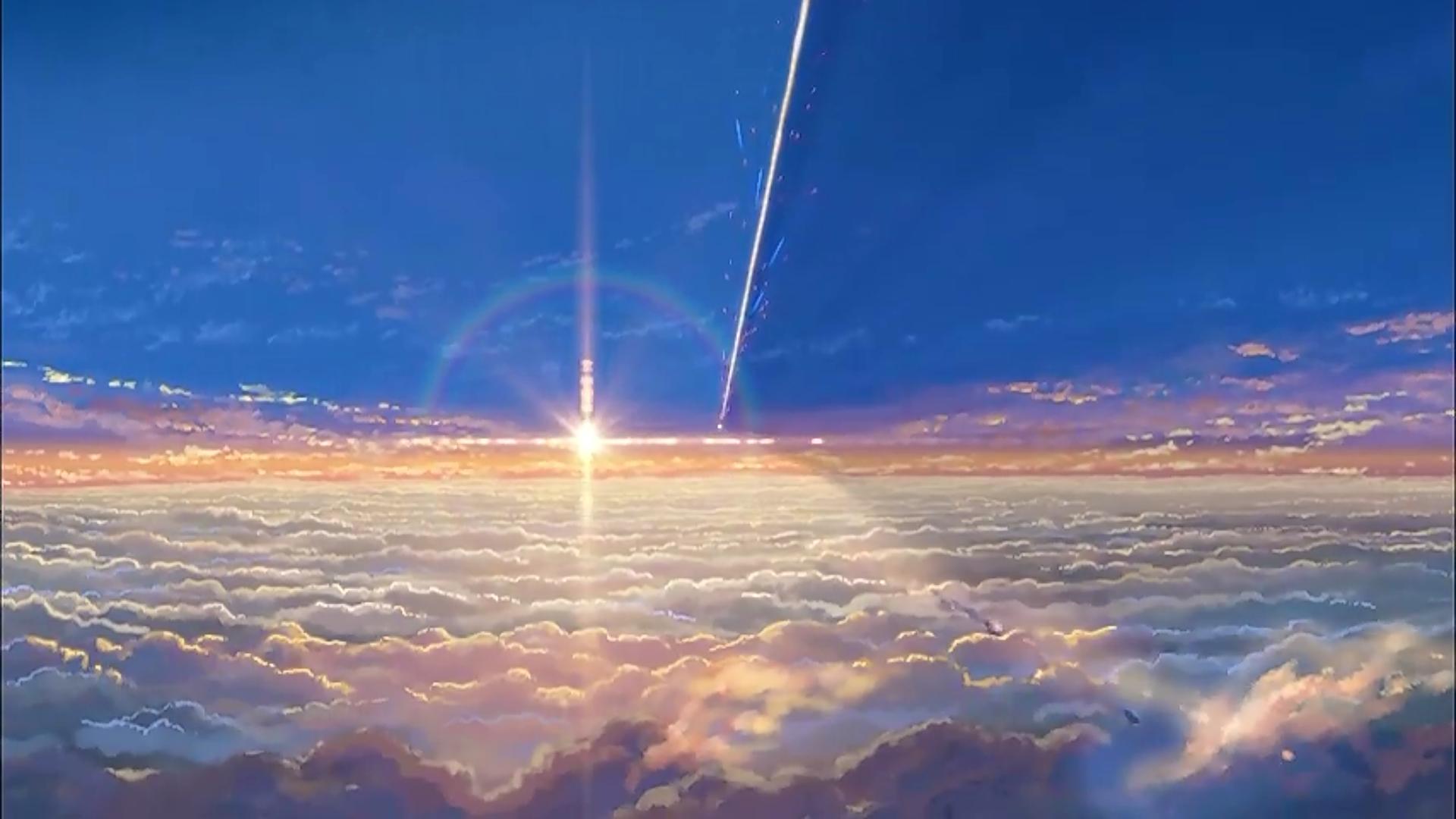 So yeah, it's sorta an anime version of Freaky Friday. It has all the laughters you expected from a body-swapping premise like this. Dude grabbing "his" boobs while being a girl and vice versa, someone not knowing where to go and where to work part-time, and wrong context of word used, etc. But then it becomes so much more than that. We then witnessed that due to the number of body-swaps happening to them. They get to know how's the other live their daily life on the other side. They begin to understand how tough-yet-unique and wonderful being inhabited on another's life. And they somehow continued to understand more about each other, and in the process, unknowingly have strong romantic feelings towards each other in way they themselves couldn't imagined. It helps that not only Taki and Mitsuha are likable protagonists and can be related to us all when we were teenagers, most of the supporting characters are also enjoyable when they're on-screen. And as stated earlier, the movie's tone took a sudden change, which is when the movie bring out its emotional impacts. It will pull your heart-strings HARD. It will make you either cry in sadness or "D'AWW~". And it does them sooo well. Bring some tissue for this one. Literally. Just in case. (Also, if your partner didn't teared up even once throughout the movie, drag that person to the toilet after it ends and beat the shit outta him/her. Totally serious about that.)

Seriously, the 2D animation managed to looks as if the whole movie was filmed live-action and then expertly rotorscoped anime-style. The way the strings being weaved. The way the sliding doors moves. The way lighting and shadows were depicted. The way handwritings were written by hands. The way the comet speed beautifully across the atmosphere. All these small animation depictions of such mundane stuffs, even if some of them were obviously drawn with some help from CG, managed to look way more impressive than Disney's and Pixar's advanced 3D animation technologies (Which is sad, as 2D animations were widely considered outdated and unprofitable by most moviegoers around the world.) I've never seen such meticulously-drawn animations since Akira.

Audio-wise, they're unsurprisingly impressive, as expected from any anime films, with excellent voice-actings and soundtrack. A lot of compliments, though have to go to both voice actors of Taki (Ryunosuke Kamiki) and Mitsuha (Mone Kamishiraishi), who managed to performed seperated personalities for both protagonists whenever they switched bodies.

Japanese teenagers' faces when they're shitposting.

Japanese rock band Radwimps composed both the theme song for the movie and the overall soundtrack, which resulted in a double–edged sword. The good thing is their overall composed soundtrack was just terrific, especially on the countryside scene with its blend of violins and Japanese instrumental track playing throughout the scenery. It was so enthralling that it'll make you cry a little to hear such magnificent sounds, and you'll somehow suspected that Jeremy Soule somehow managed to be involved in this production. A word of advice, Bethesda. If you decided to make an Asian-theme Elder Scrolls game, try and make an effort to get the band onboard. Think of the fruitful collaboration between Radwimps and Jeremy Soule!!!

The (slightly) bad thing, is whenever Radwimps' theme songs were embedded throughout the movie, it felt kinda distracting. Don't get me wrong, even though I'm not a fan of J-Rock or J-pop, their composed theme songs are undeniably delightful to listen to. It's just that whenever the theme songs were played in the film, it somehow kicked me out of the wonderful experience and reminding me that I'm just watching an anime. Heck, even the beginning of the movie starts out with a typical anime OP, which is quite cringeworthy to me from the start.

Director Makoto Shinkai were already touted by many as the "Next Hayao Miyazaki" recently (Even though the old man said he's out of retirement. Again.), and he was already afraid that his current movie became so big and overrated, that none of his future projects could lived up to the expectations of many. But for me? It doesn't matter. Even if he's not the next prodigy of anime, I certainly hope he could help continue breaking down the whole "anime are for perverts and shitheads" mentality out of most ignorant people.

All I could say, is that if there's only one animation movie to watch this year, make an effort to watch Kimi no Na wa (Your Name). You certainly won't regret it. Even with the dubs. (I watched it with the original Japanese voice-actings, in all of its glorious. Hope you don't mind me gloating about it.) 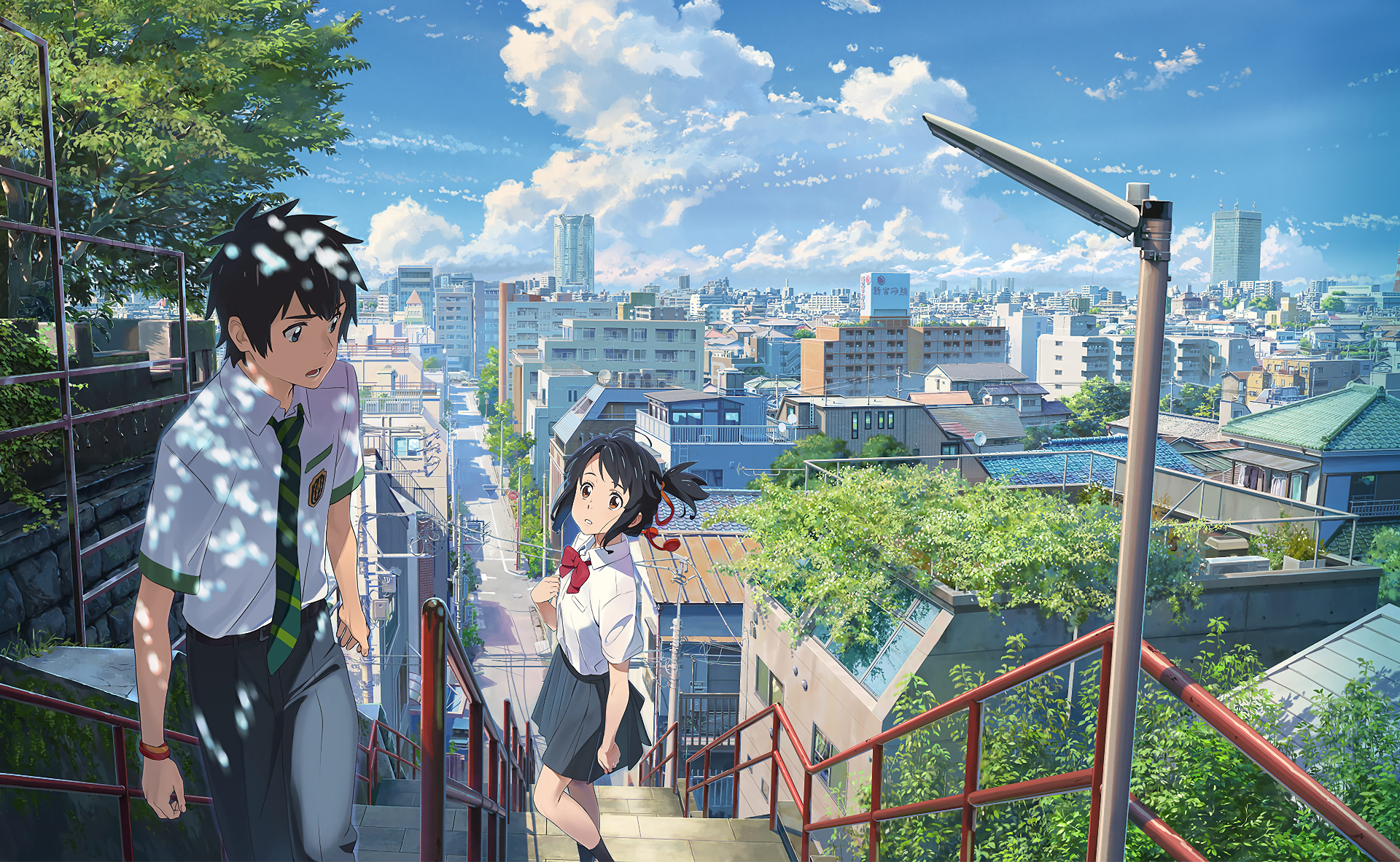 P.S.: In my honest, biased, totally wrong opinion. I thought this one fits better as the theme song for this movie. Song title-wise, at the very least.