President-elect Donald Trump made his first real announcement to the public since his election, not via press conference, as almost every president before him has. Instead he chose to talk to the public via Youtube.

It's obvious Glorious Leader Trump hates the media with a seering passion. He refers to those liberal-biased hacks as vile, disgusting and he can't point to the New York Times without preceeding them with the word "failing."

Unless you're Breitbart, the chances of getting an interview with Trump over the next four years seems slim. Especially with CNN, who was one of the most vocal anti-Trump media outlets during the election. Right now Time Warner, CNN's owners, are making a bid to buy AT&T, which would be one of the biggest media buyouts in history. Unfortunately they need approval of the US government to do so, so getting in Trump's bad books (or bad Tweets) isn't in their interest. So expect less critical news on Trump from them, at least for now.

So how does the wonderful President Trump communicate with his dedicated cult nation of free-willed individuals? Well, if the media can't do their jobs and the Youtube scene doesn't work out, there's always video games!

Now hear me out. The White House produces a video game every time Trump needs to deliver a message to the public. In order to decipher the message, you have to beat the game. It gets people engaged with his platform, gets the kids interacting with their president and it doesn't involve any of those disgusting media outlets that paint Supreme Lord Trump in a bad way!

So what kind of video games would Trump order his team of White House game developers (see? He's making jobs too!) to make?

Imagine this: You download the Trump Runs Against Illegals iPhone app. In it, you play as Trump as he chases down illegal Mexicans as they attempt to gun-down and rape American citizens (citation needed). You can swipe up to jump over obstacles, swipe right to speed up and swipe down to set up a police stop ahead to target visible minorities.

The game ends when you chase away 11-million illegals (though you can stop at 3-million, the game stops keeping track after that), or if the illegals succeed in getting away. Though if that happens Trump just re-opens the Illegal Immigrant Database and you can start hunting them down again immediately.

When I stare into the deep, angry eyes of Donald Trump, sometimes I lose hours to their piercing perfection. I only hope the White House realized my (and many others) need to want to date the President-elect, and make Grab Me By the Pussy Senpai!, the Donald Trump dating sim we all want. 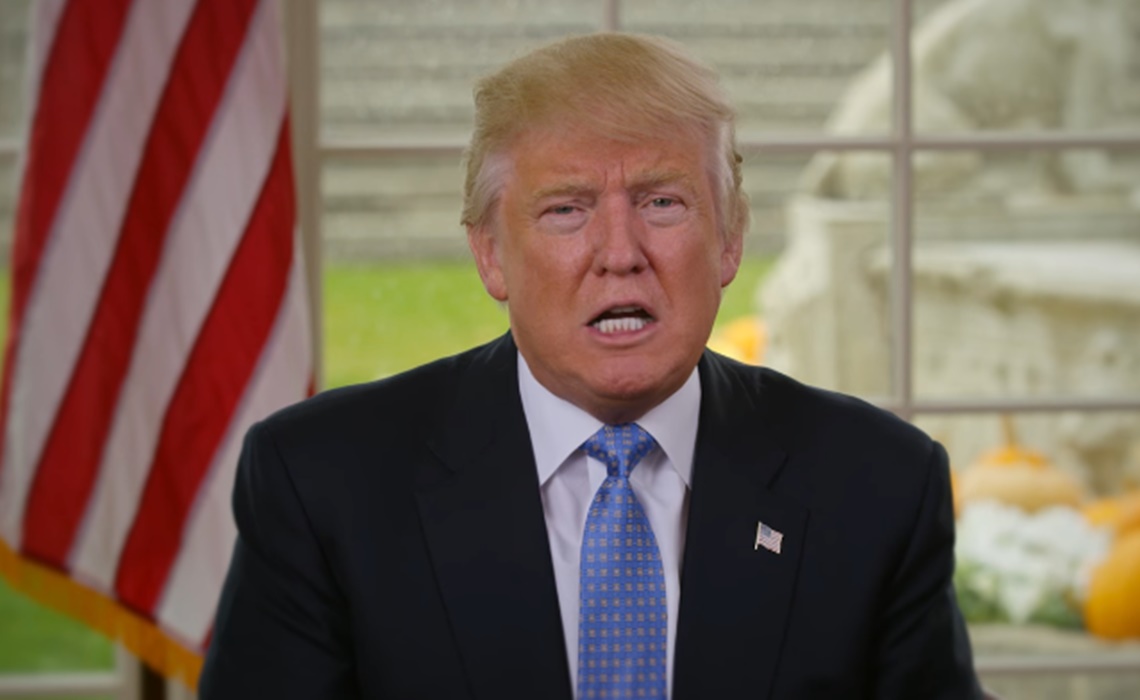 Who wouldn't want "classmate" with this man?

Imagine sitting in class among a harem of beautiful waifus, when your eye catches that hot orange hair, those moist orange lips and his soft orange skin. Of course, there would be no other dating options in this game, since selecting anybody other than Trump immediately ends in a game over.

The game ends with Trump divorcing Melania and marrying you, telling you that you're the most beautiful woman he'll ever know for the next seven to ten years, aside from his daughter. However, if you chose the male protagonist at the beginning of the game, Trump will fail to declare his love for you, saying that he repealled gay marriage laws before the game started.

At this point, Mike Pence-chan comes out from hiding and electrocutes you for trying to be gay with Donald Trump. I'm not talking about the game, he actually summons himself into your room and tasers you in real life.

A lot of Americans are wondering exactly how the Trump-meister plans to get the Mexican government to pay for the wall, and the White House has the perfect plan to explain how they plan to do that.

In Click My Peso, you attempt to grab coins as they fall out of the wallet Trump stole from the Mexican government. Every time you tap on a coin a little bit of the wall gets built in the background. Upon building about a quarter of the wall, players will be surprised to find that the game suddenly ends, with a little Trump coming on screen, telling the player that for the full experience they'll need to pay up.

Microtransactions in Click My Peso are quite generous, and give a lot of content for what you pay. The smallest micro-payment you can make is a small loan of a million dollars, which adds exactly one brick to the wall. In a shocking twist, the game will actually be a social experiment just like Peter Molyneux's Curiosity, where the last player to pay for the last brick of the wall will have the honour of building the wall themselves! They'll be working alongside a crack team of experts taken from the best prisons, since most of the manual labour will have been deported back to Mexico by then.

These are just a few of the ideas I feel Trump should consider as he moves into the White House. Obviously the news media industry can't be trusted to handle the messages of one of the greatest leaders of all time, so we'll have the manage through the artistic medium of video games.

And if that doesn't work out, there's always Twitter.