“Papers, Please” carved out a small niche for games; I guess you could call them “totalitarianism simulators,” only instead of being the dictator, you're one of the regular people on the ground level who have to manage increasing workloads, bizarre government directives and their own well-being. Inevitably, they experience presure to help the resistance. It's a formula that Beholder dutifully follows. 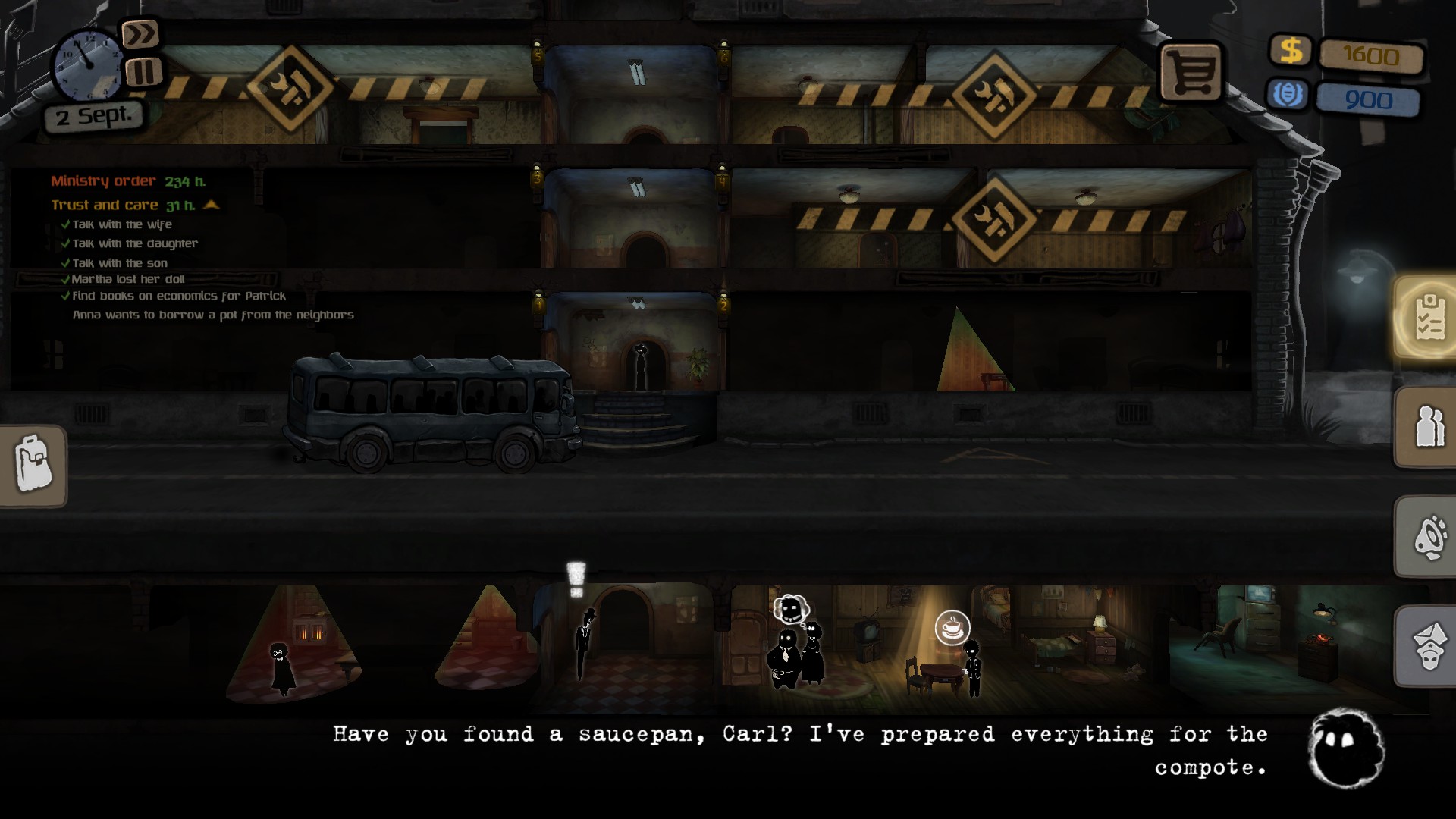 I guess even a non-grandma can make compote, but it just feels wrong

In Beholder, you are Carl Shiner, who has just been asigned to be the landlord of an apartment building. He and his family get to move into a basement apartment (there are benefits to it, as the communal kitchen and washing room are just across the hall), while Carl gets doped on drugs that let him stay without sleep indefinitelly. And why would he want to sleep if his job is to watch the inhabitants closely, monitor their activities and report on them to the government? What does it matter if some of them need “help” in breaking the law?

So that is the game. You have a doll-house (or Neighbors From Hell or Fallout Vault) style cutway of the house, and Carl can move (double click to move faster) between the four floors and the basement, as well the street in front of the building. People come and go, Carl stays. Carl waits while nobody is at home and then uses his master key get into the apartments and rummage through the tenants' stuff, gather data (and, hopefully, incriminating evidence), plant cameras inside smoke detectors and maybe steal something that would surely aid him in his personal life. He does this to fullfill the phone-delivered tasks from the ministry, and he also has to deal with various requests and pleas of both his tenants and his family. Hopefully, nobody dies, and nobody important to you gets sent to the gulag. 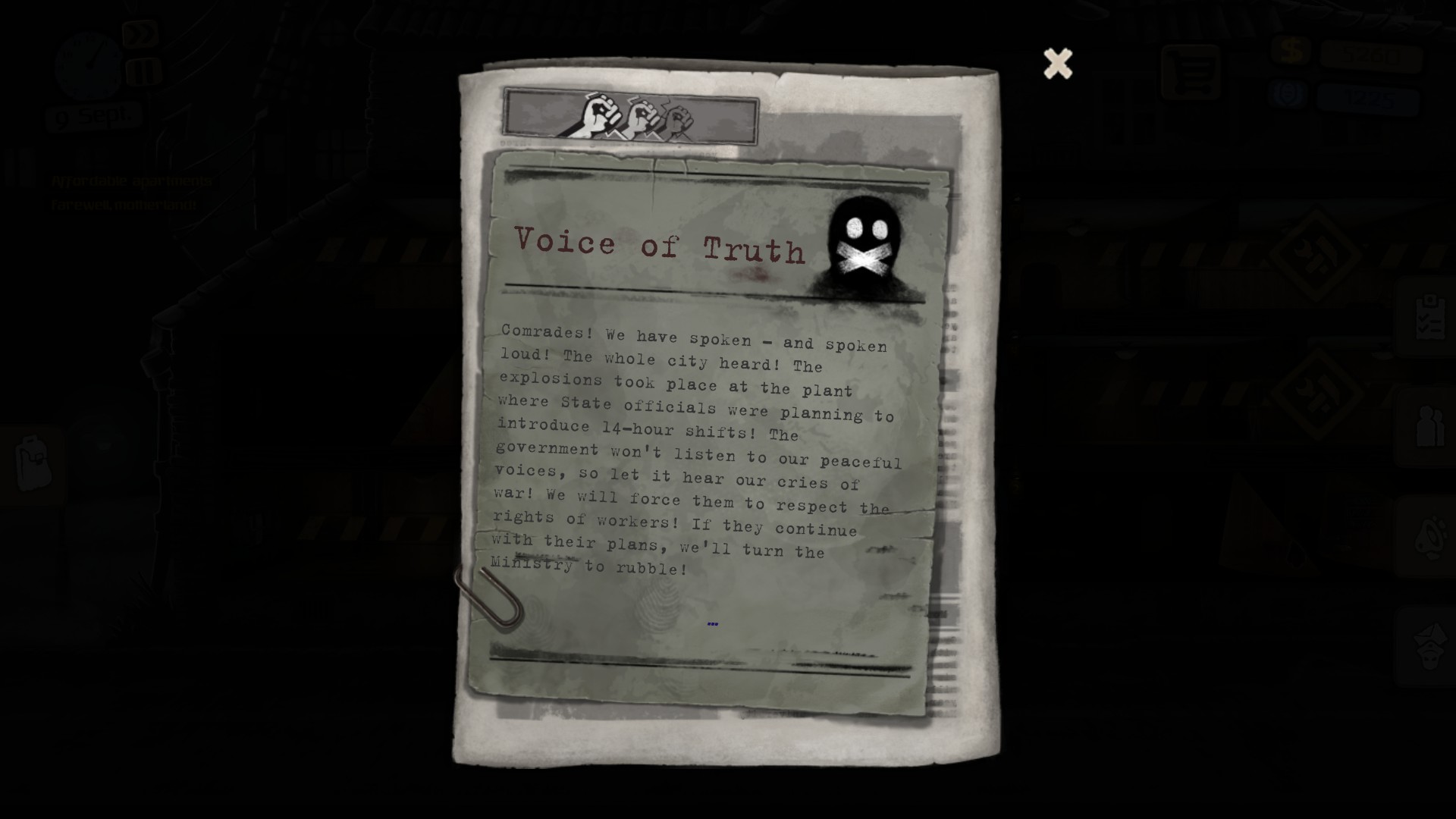 Voice Of Treason Freedom is delivered with the newspaper. Somehow, it always has a rebuke in blue ink.

So it is sad that the game is quite linnear and thus lends itself to optimization. As you restart the game after getting yourself into a pickle, you will find yourself jumping through much of the same hoops again, and finding creative ways of accomplishing tasks for the maximal benefit of Carl and, by extension, you. You will learn what triggers timed quests and what items you need for their profitable and somewhat timely completion. You'll learn brinksmanship in regards to timers and you'll know which tenants interact with which quests; usually, gaining something through tenant contacts is cheaper than just buying it on the black market, and money is something Carl's family needs if they want to avoid dying from respiratory tract infections or coal mine-related causes.

Carl will be pushed to the brink, as the game is willing to serve you curveball after curveball as it goes down family quest lines. Luckily for you, the cameras – the main surveilance equipment in the game as they reveal a certain area of the flat around the smoke detector, letting you profile and gather evidence on the tenants – are bought for influence point. These are also gained through completion of quests. It's best not to think about how your wife's repect for you translates into additional camera buying capacity. But other than that, the family will be a money sink, and Carl will be unable to earn enough by using clean methods, like compiling tenant profiles and completing ministry quests. You might need to get creative with the evidence (the ever-increasing list of prohibited items and activities helps) and maybe resort to some blackmail. 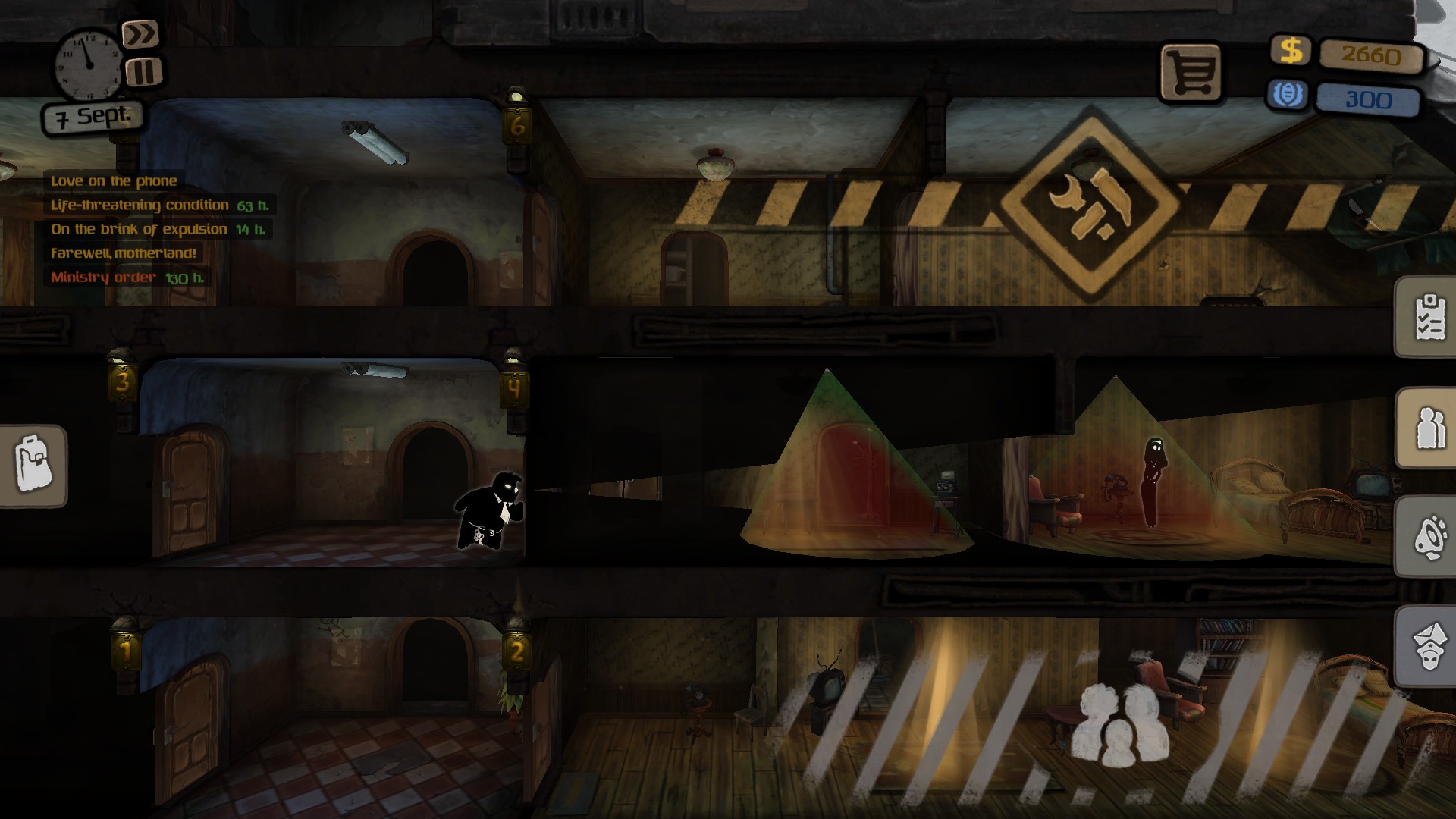 And while “Beholder” follows the example set in “Papers, Please” - down to increasing instability of Notviet Nuhnion and fluctuating family health – it has something that sets it aside from, say, “Westport Independant.” Carl is a character and even if you have choices (usually moral ones) to make, he has his own traits that are beyond your control. He has a stern talking manner when it comes to his son, and you'd wish he'd be smoother and less argumentative with his wife. Carl is also casually mysogynistic (though it rarely shows). In the end, it makes him less of a player stand-in than the gears of bureucracy are in other games, which is a commendable effort in humanizing your character.

I also loved the game's art. The game is 3D, yet the textures veer to the side of cellshading, which is a great idea for a game development studio that's strapped for resources. It's even better with the people in game: they are just black silhuettes (individualized for every one) with some white details that makes them easy to pick out. It's a great stylyzed approach and I love it. It saves studio resources, it gives the game a unique feel and it makes characters instantly recognizable, which is important when you're stealing whisky and hoping they won't catch you in their apartment. 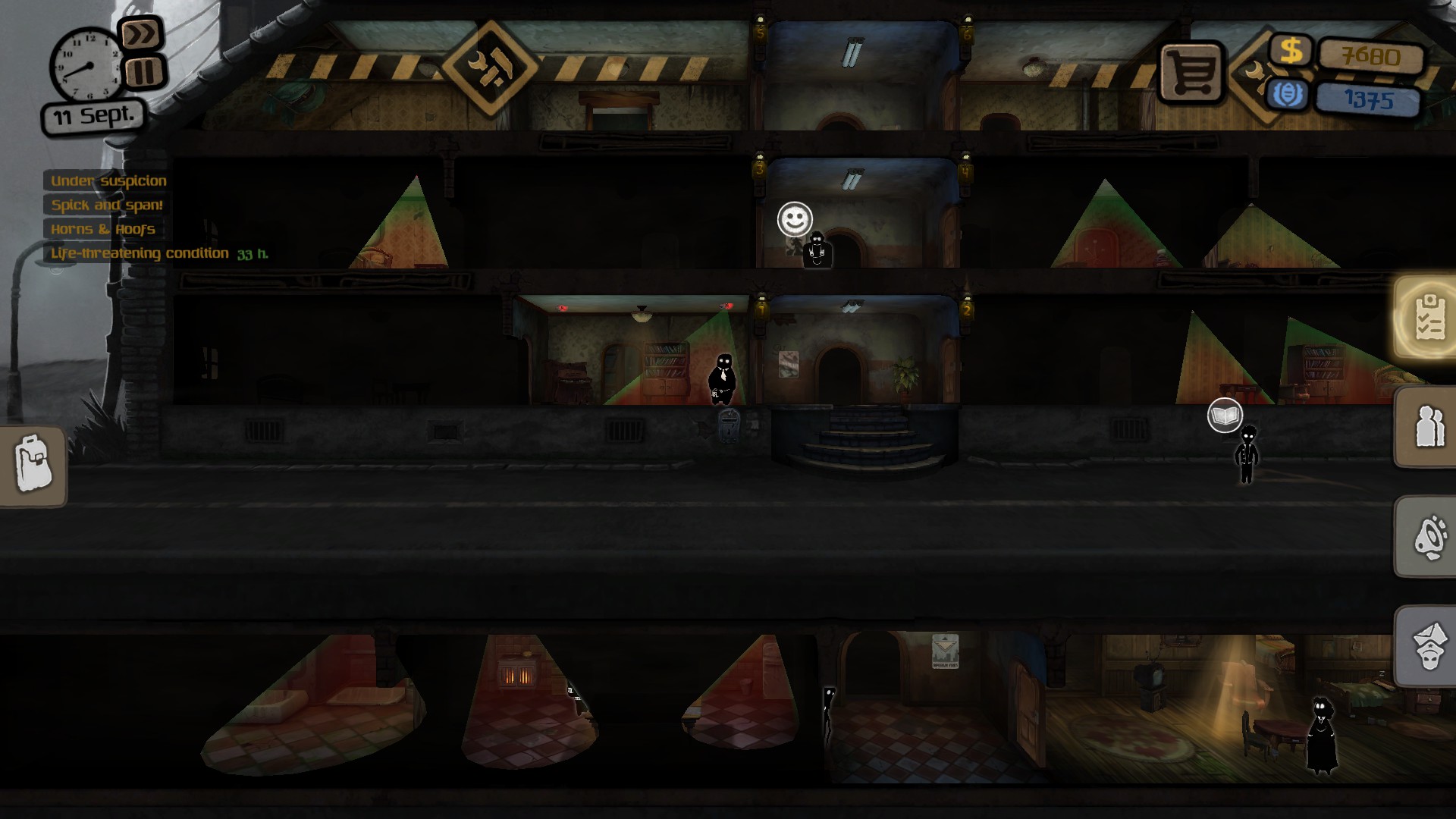 The dictatorship cares about fire safety almost as much as it cares about oppressing the people.

Beholder, even if it's draped over a familiar template, is a good game about moral compromises and the slippery slope towards looking out for number one. It's a little too easy to learn by rote and the need for optimization detracts from the player experience and the message from the developers, but, all things considered, it's a good game.

Does anyone know where I could buy some smoke detector cameras? Asking for a friend.