I love when a game manages to surprise me. Whether is an unexpected twist or a subversion of an old trope, the “holy shit” effect is always welcomed and generally makes the experience richer overall. It’s one of the reasons people want to go in as blind as possible in games such as the SoulsBorne series or Undertale.

With the recent release of CoD 4 Remastered the time feels appropriate to revisit the vanilla CoD 4 (because no way in hell I’ll get Infinite Warfare now) probably my favorite CoD of all time (second place being CoD 2, don’t worry). I of course already knew every set piece: The sinking ship, the ever awesome sneaking in All Ghillied Up and the follow up mad escapade, even the great crescendo that is the ending. But there was one thing I somehow forgot that hit me in the face like a truck. And as I played the game, it crawled back into memory like PTSD or something. I’m talking about Aftermatch.

In the American side of the story, the player controls Sgt. Paul Jackson in various operations to hunt down and eliminate a terrorist threat. Eventually, the American forces have a fix on the position of the game’s antagonist, Khaled Al-Asad. And in the middle of the city raid, the Seal Team 6 informs that there’s a nuke in the city and everyone needs to get the fuck out. As you are making your escape, one friendly helicopter crashes and, against the warnings of the superior officers, your squad goes to the rescue. You land and fight your way to the crash site, get the pilot back to the helicopter and take off. Great! Now to get out befor- Holy shit that’s a big explosion!

Your chopper and many other are still in the blast radius. You are hit. You spin. You crash. The screens fade to black. A loading screen appears, this time with no briefing.

And then, Aftermath begins. 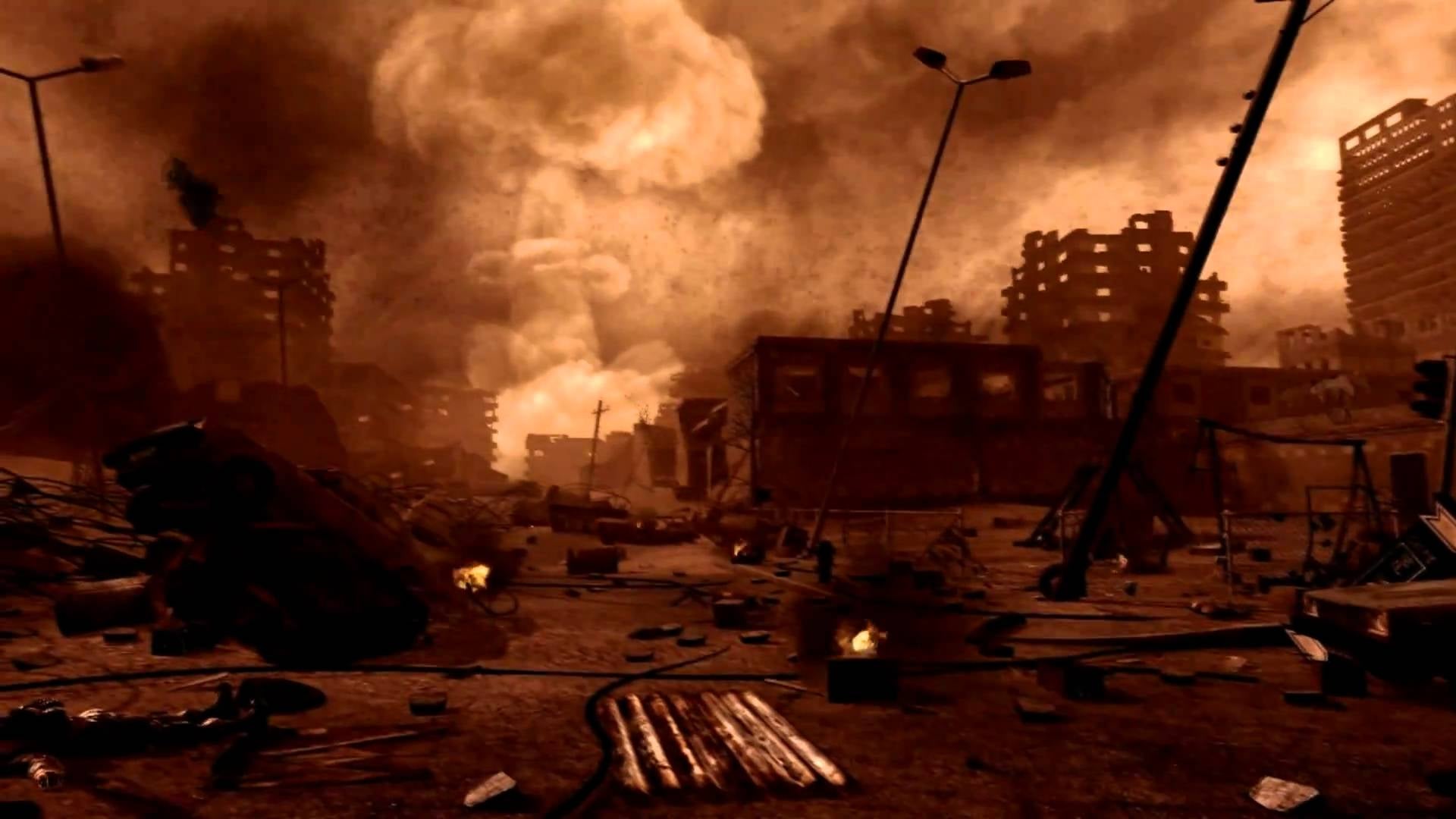 Helicopter crashes in shooters are far from being a novelty. It happens in almost all of them. It usually goes with someone screaming “We’re hit!”, then the spinning followed by a quick back screen, then the crawling out of the plane and finally you shoot the bad guys that are coming for you. And at a first glance, Aftermatch seems like one of those. It’s only natural to think that after so many games doing the same thing. Paul Jackson awakes with a broken leg, and crawls out of the wreckage, just to be contemplated with the destruction the bomb caused. You see the bodies of your squadmates, a teddy bear, what is left of a school, wreckage, a playground and the ominous mushroom cloud on the horizon. Hell, there’s even a skyscraper turning to dust. It’s not pretty.

One could assume that now we are going to guide the good Sgt. to safety (And according to the wiki, that was indeed the case in the original draft). Surely that must be something to do, since the game handle control to you. But several moments later, nothing happens. No life regen, no radio contact, not even an objective update.

And then, reality ensures. You won’t make it this time. Paul gets weaker and weaker. If the player manages to get close to the playground he can hear the ghostly voices of children. Then, you collapse on the ground and everything fades to white. Sgt Paul Jackson dies. Not in a heroic sacrifice, not in an epic last stand, not saving the world. He’s just another number in the death toll, a name among many others. 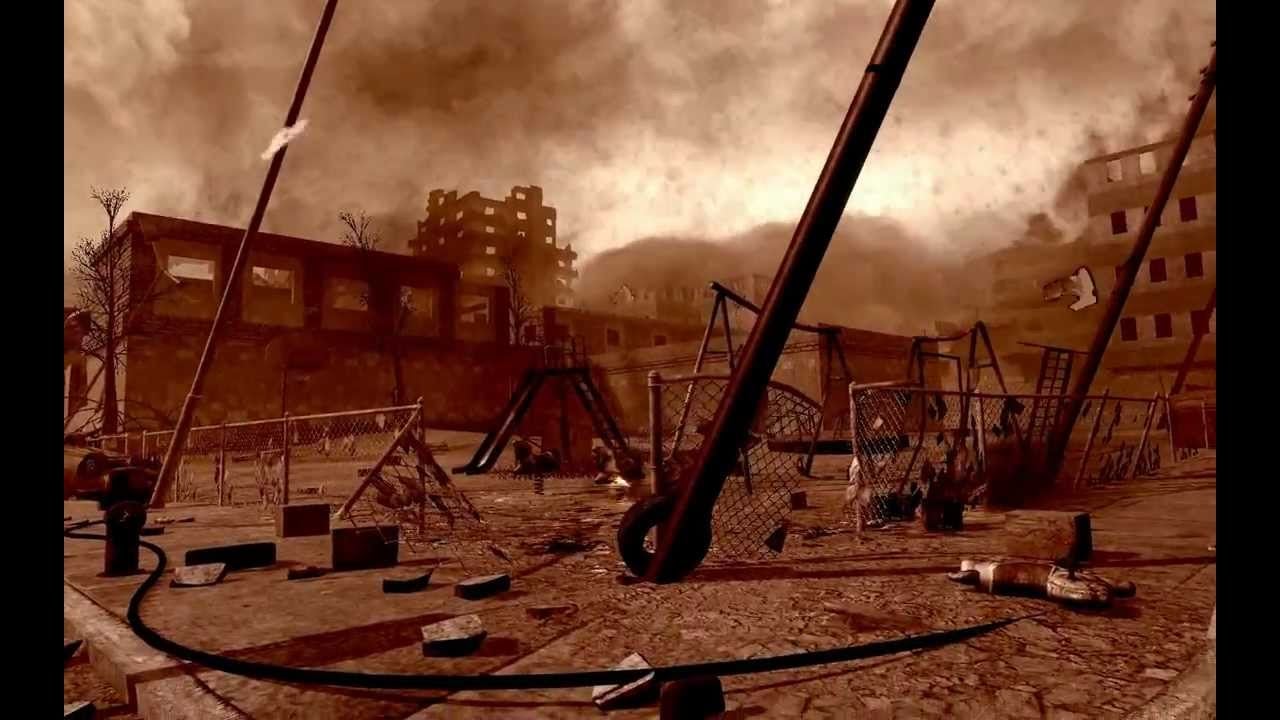 This sequence ends as quickly as it begins, but damn, today this is my favorite moment in the game, probably in the whole series! And I understand Jackson is not the only character to die in such a unceremonial way (The sequel has three or four examples of that), his death is the one that stands out to me the most. And there are a few reasons for that.

First, it is a great reminder of why nukes are bad, even if it is a little unrealistic, since looking at a nuke without protection would burn your retinas, and at that distance things would most likely be carbonized by the heat of the blast alone, but hey, this is CoD and so I can be a little forgiving just this time. It’s one thing to hear about the destructive power of splitting atoms, but getting to see a city after a nuke in a first-person perspective is really something else (maybe someone should make a game where you have to survive a nuke blast. That would be an interesting experience). The ghostly voices of children are the nail in the coffin for me. I failed to trigger it on my first playthrough, so hearing it now it’s almost scary. It is also a way more powerful and classy way of reminding the audience that kids also are casualties in war than that scene in MW 3. That was needless and I’ll never let it go.

It also takes the idea of the invincible soldiers portrayed so many times in the series and quite literally kills it in front of you. Up until this point in the game, the only character to get killed on your command is Yasir Al-Fulanithe, the president on the beginning of the campaign. Other than that, every time you die is a checkpoint restart, so failure is a mere settle back. Everything until this part has been a nice action movie fantasy. You always escape, and always win every battle, and those battles always bring you closer to victory.

Aftermatch shattered the hero illusion of the invincible soldier that I always felt throughout the entire game. These characters are just men and men can die. This short sequence is a great plot twist and powerful moment that other MWs failed to understand what made it great in the first place, and instead just trowed controversial shit for the sake of controversy.

And I love it for that.

“War is delightful to those who have had no experience of it.” - Pindar, Greek poet.