When the name of Toei's newest Kamen Rider was leaked to the masses, people weren't sure what to make of it. Ex-Aid? Some took the "aid" and thought doctors, while others tried to figure out how "Ex-Aid" could turn into "18." Anything was possible with this hero, and knowing the people behind it, that was as true as ever.

Then we found out the theme of this year's masked hero would actually be video games. Gaudy, pink and green video games, to be exact. 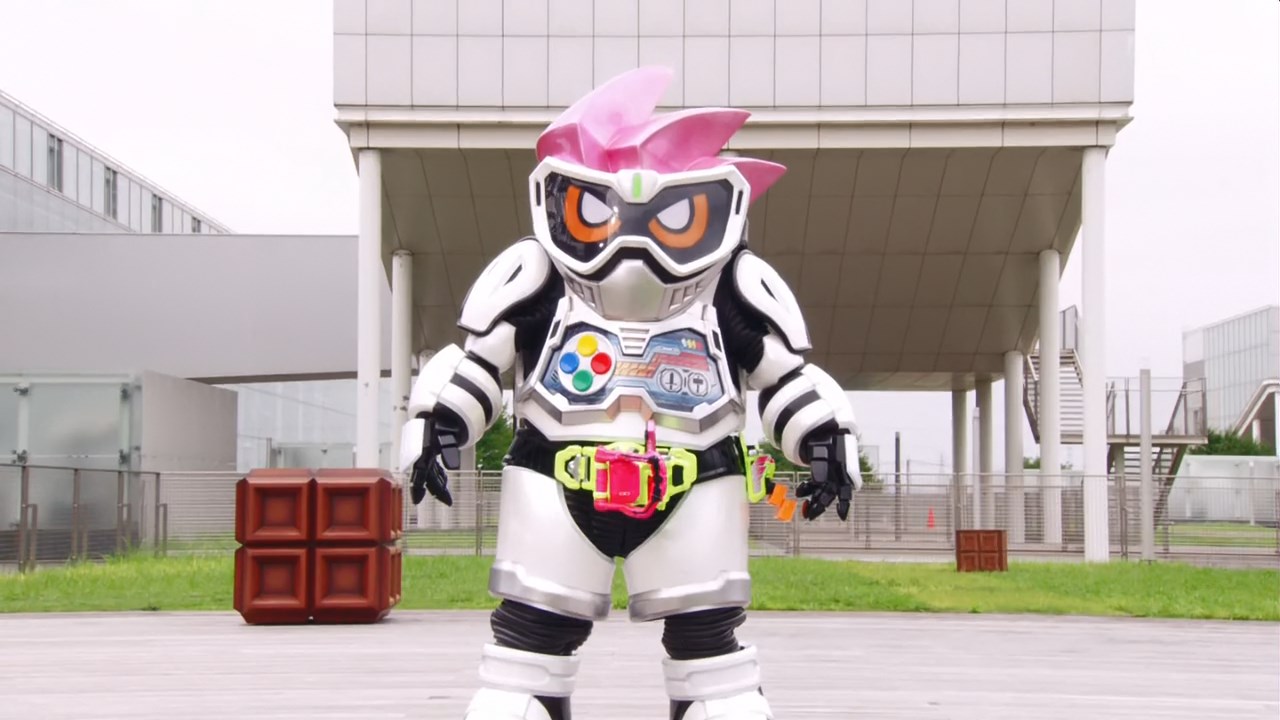 Our hero, ladies and gentlemen.

On paper, the idea sounds absurd, and that's saying something given the most acclaimed Kamen Rider series in the past five years has been about fruit samurai and banana knights having turf wars using Pokemon and street dancing. No, really. Check it out, it's pretty awesome.

Even so, here we are, a few weeks into Kamen Rider Ex-Aid, and it is indeed a series built around video games... and doctors! 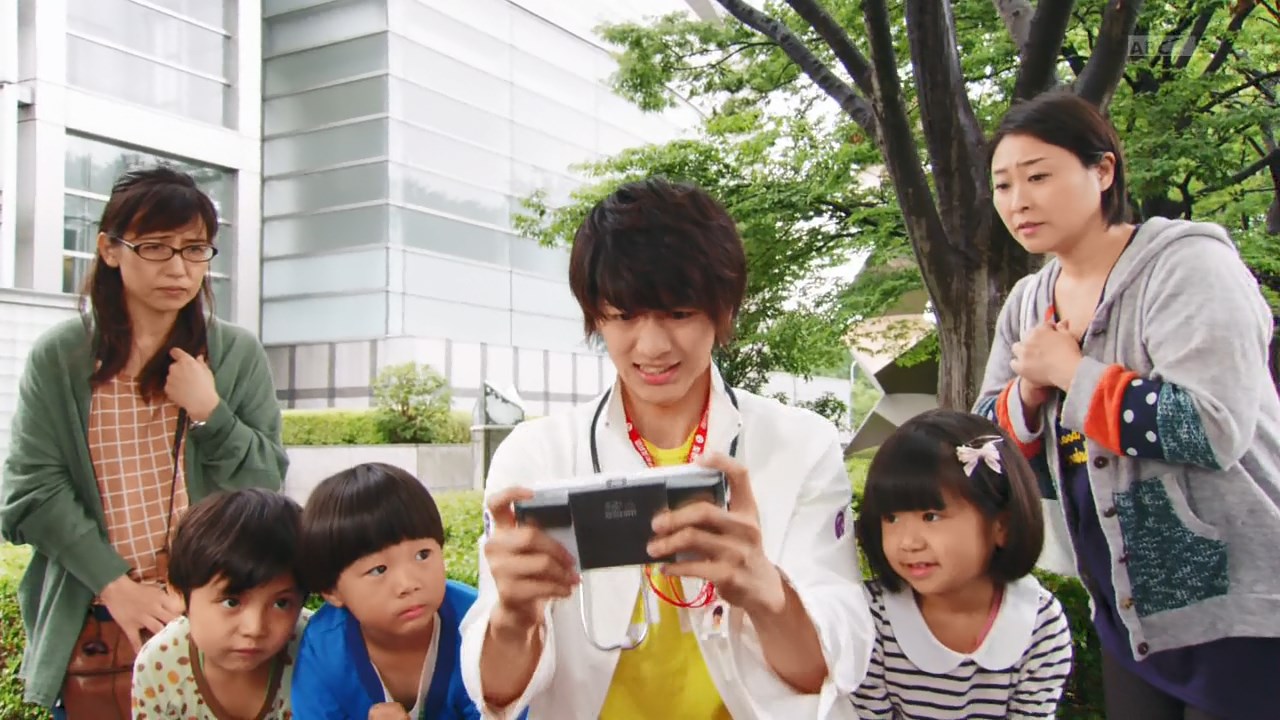 "I hope he can beat Bowser before it's time for my daughter's surgery!"

Ex-Aid has surprised me so far. It's catering more towards the younger crowd in some of its writing, but in the visuals, in the effects, everything about it seems to be going for a very strange, surreal, but still very enjoyable nostalgia trip for gamers, young and old.

The series gives us our protagonist in the form of rookie doctor, Emu Houjou, who is a huge gamer in addition to his being a doctor. He's youthful, optimistic, but seems to get way too into things when he starts gaming. He still cares a lot about his patients, as our hero must, and so he's naturally going to try to help when he finds out a patient of his has been infected with a video game virus. Which is what leads him to becoming Ex-Aid.

On its own, the set-up is pretty standard, and that's fine. It's when our hero transforms that the show starts to profess its love to us gamer types. 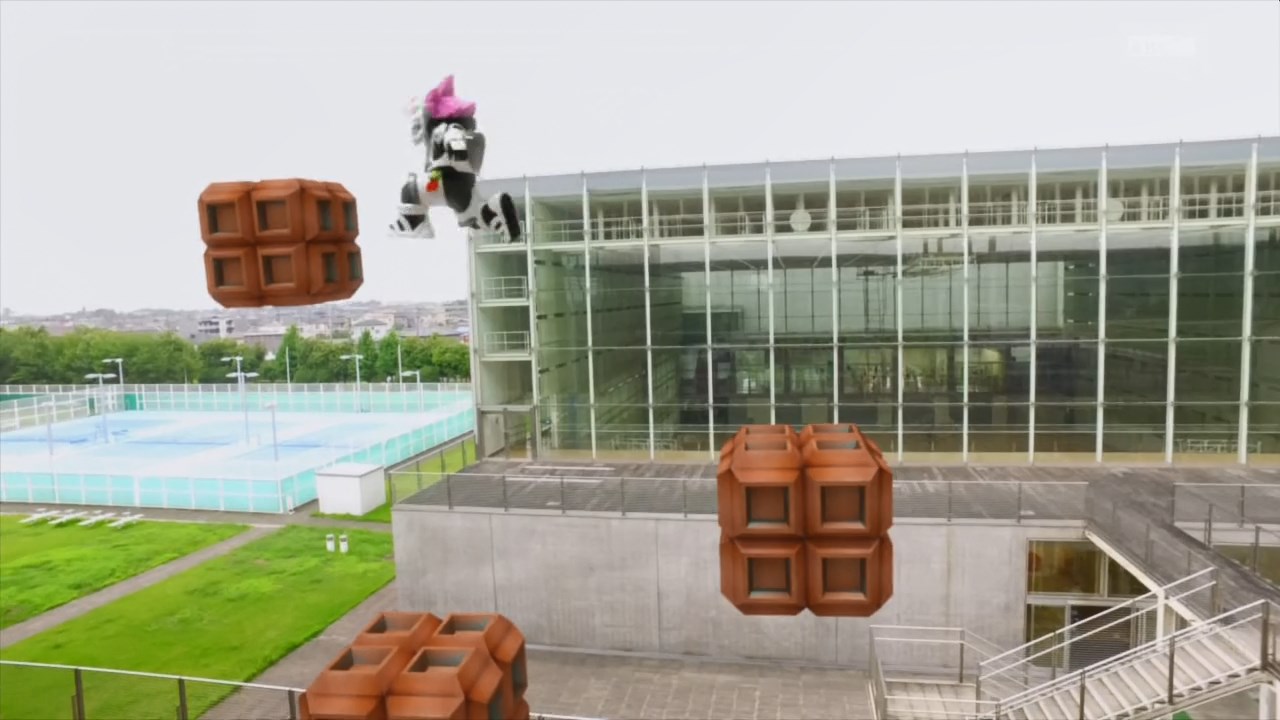 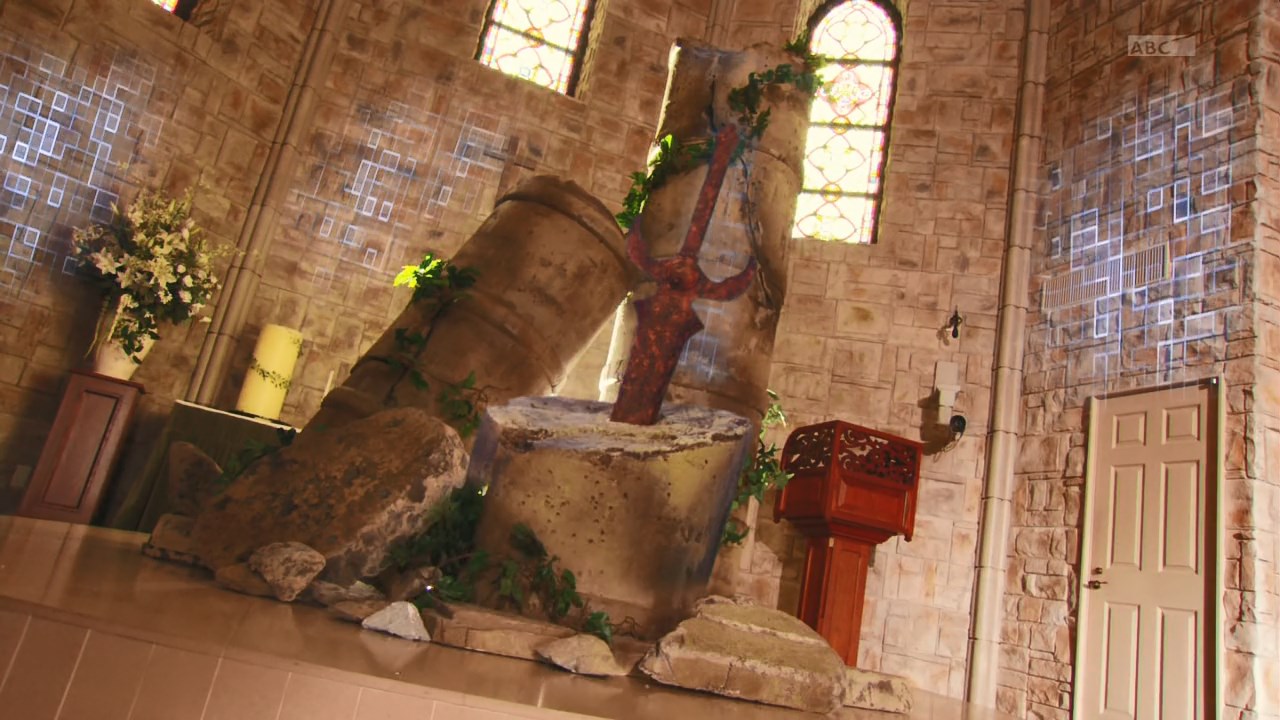 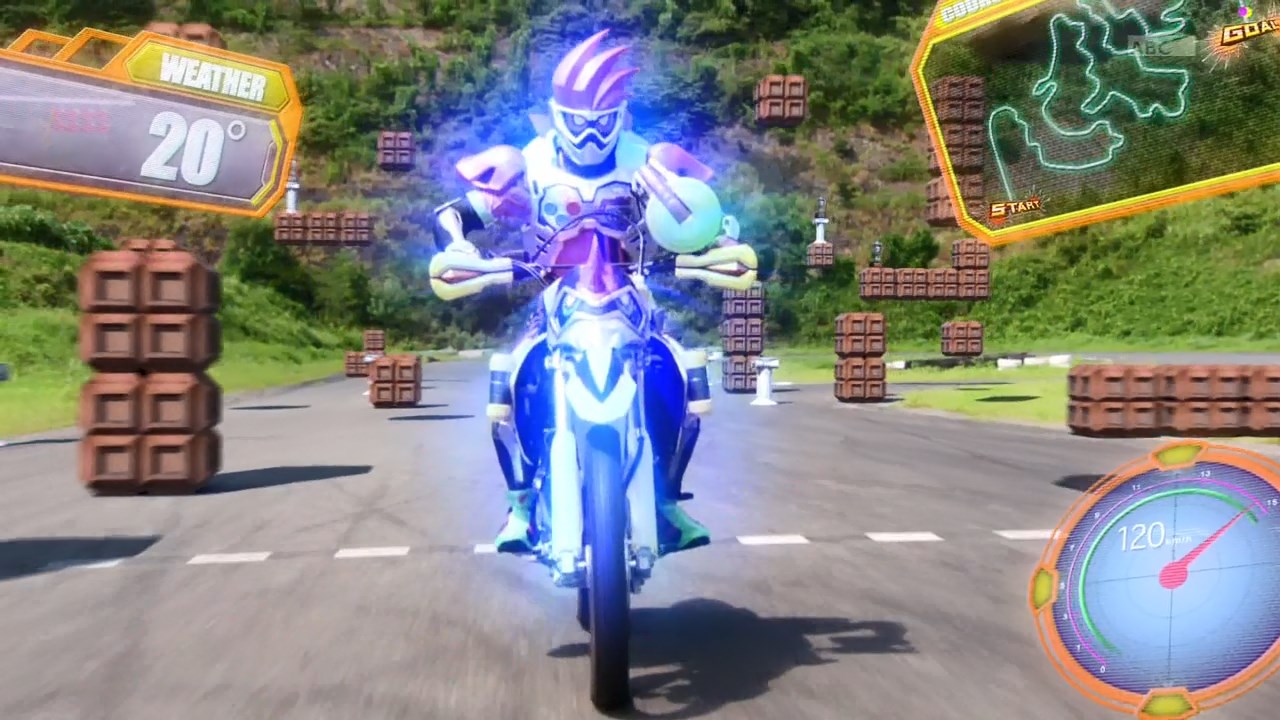 I won't tell him his platforms look like chocolate bars if you won't.

Each Kamen Rider in Kamen Rider Ex-Aid uses a different Gasshat, Gasshats being this series' form of collectables. They put these Gasshats into their Gamer Drivers to transform. The Driver, for all intents and purposes, is basically the Rider's video game console, with the Gasshats being video game catridges. If you think I'm reaching, just read this interview with the person behind the design of the thing. Even the colors are intended to be a callback to our long forgotten gaming past!

With Kamen Rider Ex-Aid, this means a bunch of blocks fall out of the sky, which he can bounce off like Sonic of or break with his hammer like Mario, and even find coins inside for some power ups. With Kamen Rider Brave, whose Gasshat is the in-series RPGTaddle Quest, this means treasure chests and other RPG-items like legendary swords are generated. In the case of the newest Kamen Rider to join the fray, who is themed around racing games, this means goal posts and even a race track can all be generated.

And as for Kamen Rider Snipe, whose theme is shooting games? 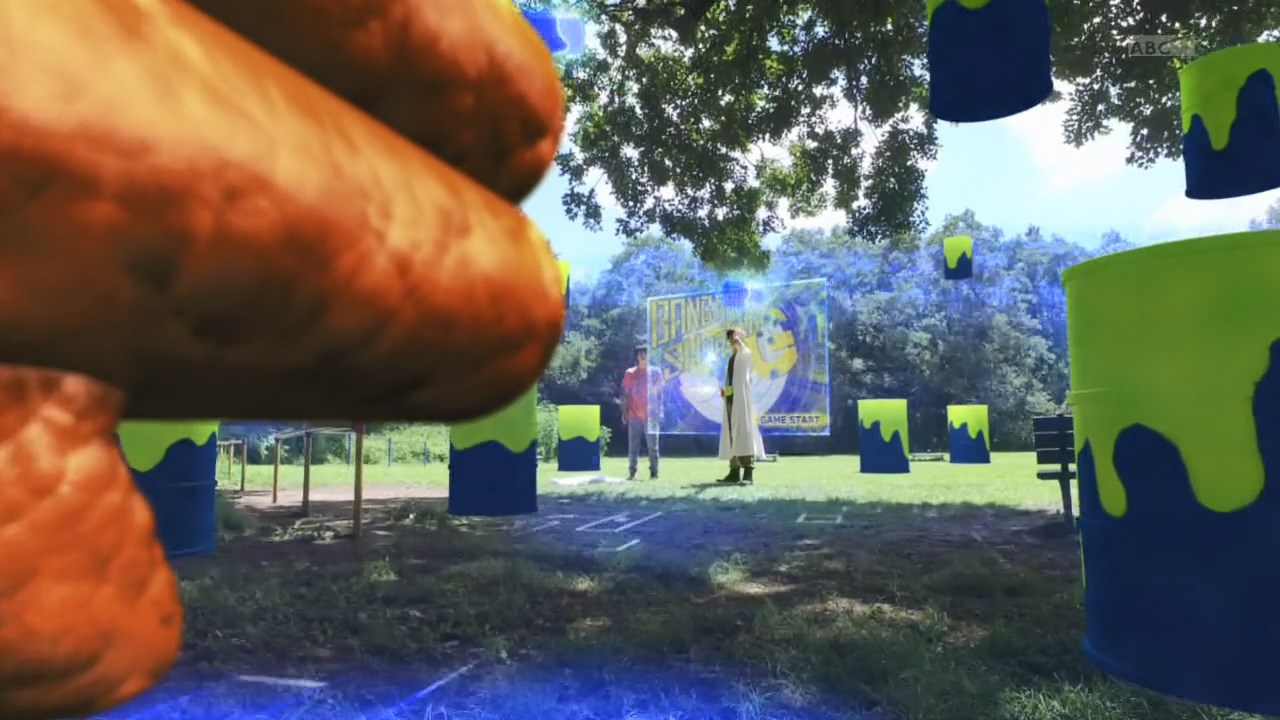 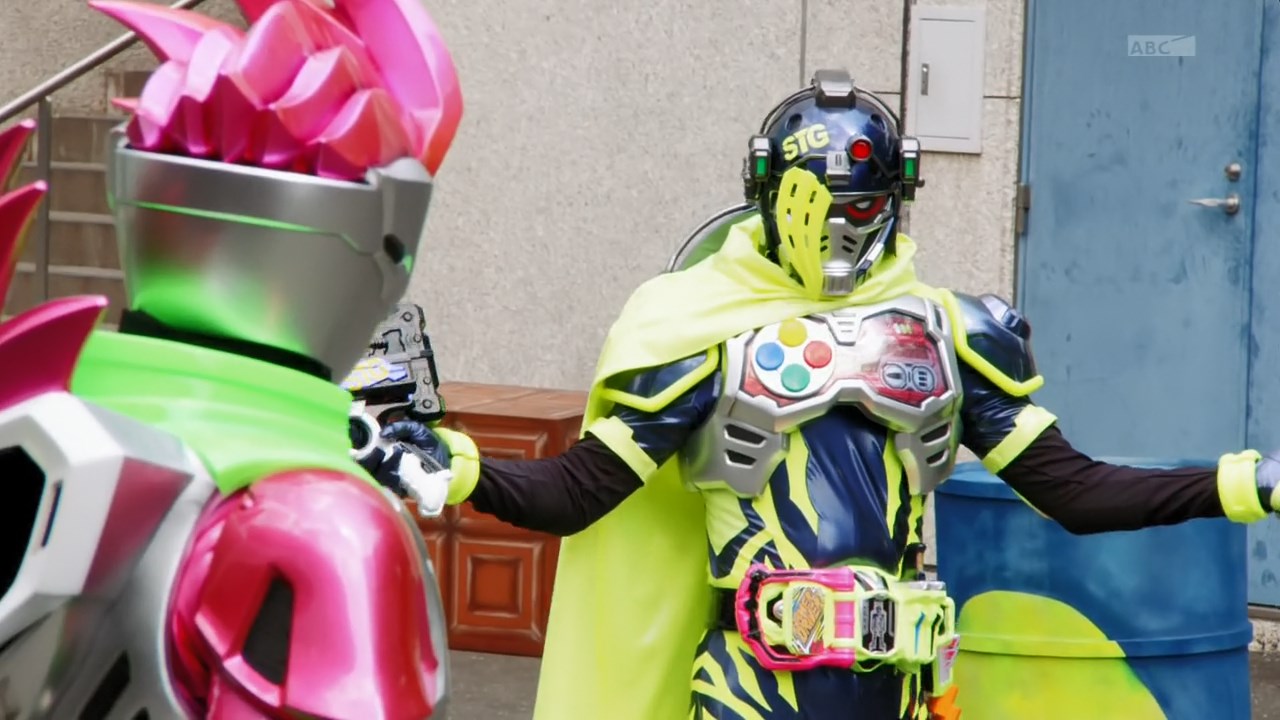 Narratively, Ex-Aid is actually somewhat unique in that it seems to be combining the storytelling devices of superhero dramas with medical dramas of all things. Because sure, we've got out mystery video game bug virus that seems to share some origins with how the heroes have their powers (standard Kamen Rider stuff here), but then we do some other things with our heroes. Or "heroes," depending on how you want to look at them.

You've got your rookie doctor in our protagonist, Emu, who may be a little too into his games for his own good. Then you've got Hiiro Kagami, the RPG Kamen Rider, Kamen Rider Brave, who is a surgeon and the hospital director's son. Following him we were introduced to the shooting Kamen Rider, Kamen Rider Snipe, known to us mortals as Taiga Hanaya. Taiga was originally just a radiologist who ended up being the original Kamen Rider chosen by the hospital's Kamen Rider department (it has a better name than that, I promise), but eventually, pride and a patient losing their life cost him his license, causing him to become a Rider without a cause. And as for our last guy? He's the medical examiner. The coroner. The guy that looks at the dead people. Fun, right?

In other modern Kamen Rider series, Kamen Rider Brave's character would probably be pegged as an antagonistic one. He's pragmatic, he cares more about eliminating the viruses than he seems to care about saving the patients, and besides for some quirks here and there, he seems to be distant and not at all interested in getting along with our hero. He just wants to get the job done.

However, because Ex-Aid has instead labeled Brave as a surgeon right off the bat, it seems to want to provide some justification for this attitude and, while not completely ignoring the potential for conflict, instead focus on the doctor practicing without his license and the actual villains instead, hopefully with the intention of letting the two characters, optimistic Emu and seemingly cold-hearted Hiiro, learn from each other as the series goes on. 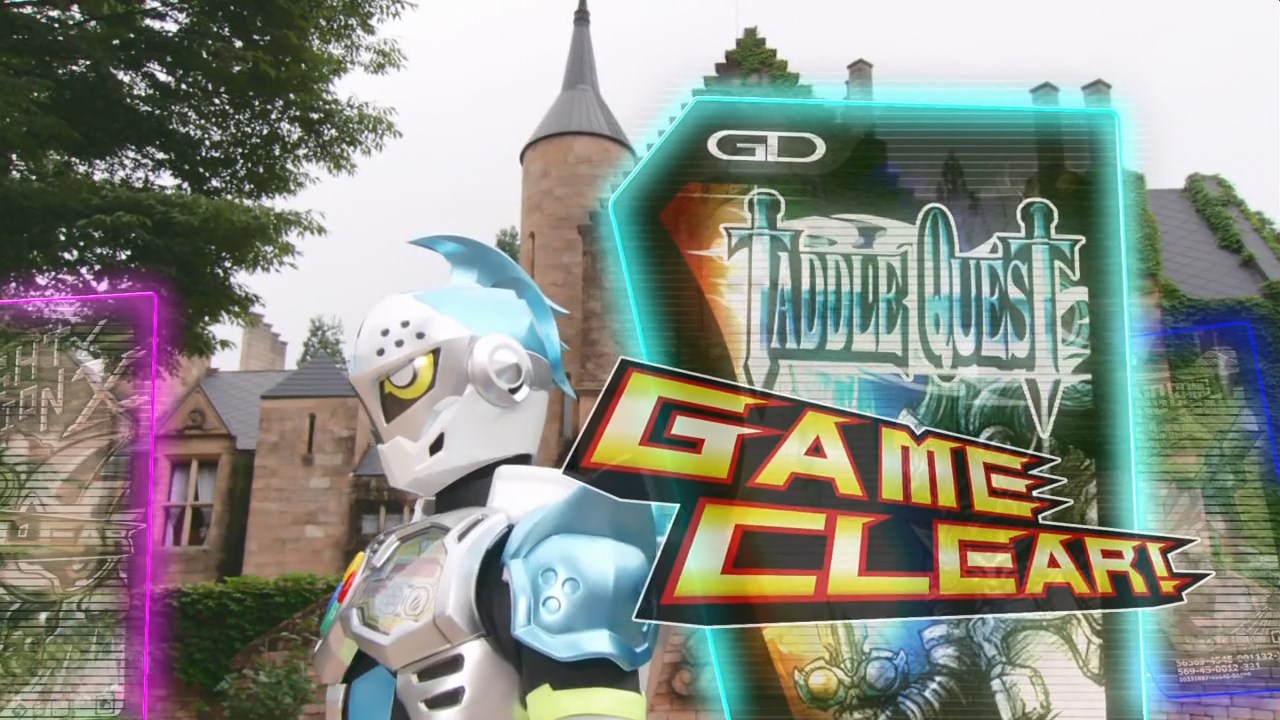 Still better than Lightning, am I right?

The effects in the show, for the time being (Kamen Rider has a history of being flashier early on), have been a real joy, and perhaps even the show's selling point in many ways. They definitely pulled me in right away.

See, in addition to how each character generates their own levels based on their game and how their having health bars is now a goofy little plot device, there are old school sound effects all over the place, and the monsters have thus far all been video game themed in both how they fight and how they look as well. If you're an RPG fan, I guarantee you're going to get a kick out of the villain Ex-Aid and Brave have to fight in Brave's introductory episode.

Mighty Action X is also, in a clever move from Bandai Namco, actually releasing on the 3DS with an upcoming Kamen Rider game. They've taken to including actual game footage in the series thanks to this, and it's been both blatant marketing and a really nice touch to add that level of "realism" to the series as well.

There is also something Ex-Aid does before his finishing move that is just so perfect I don't even want to say it in case I've already sold anyone on the show. Here is a gif of it, but I will say no more. 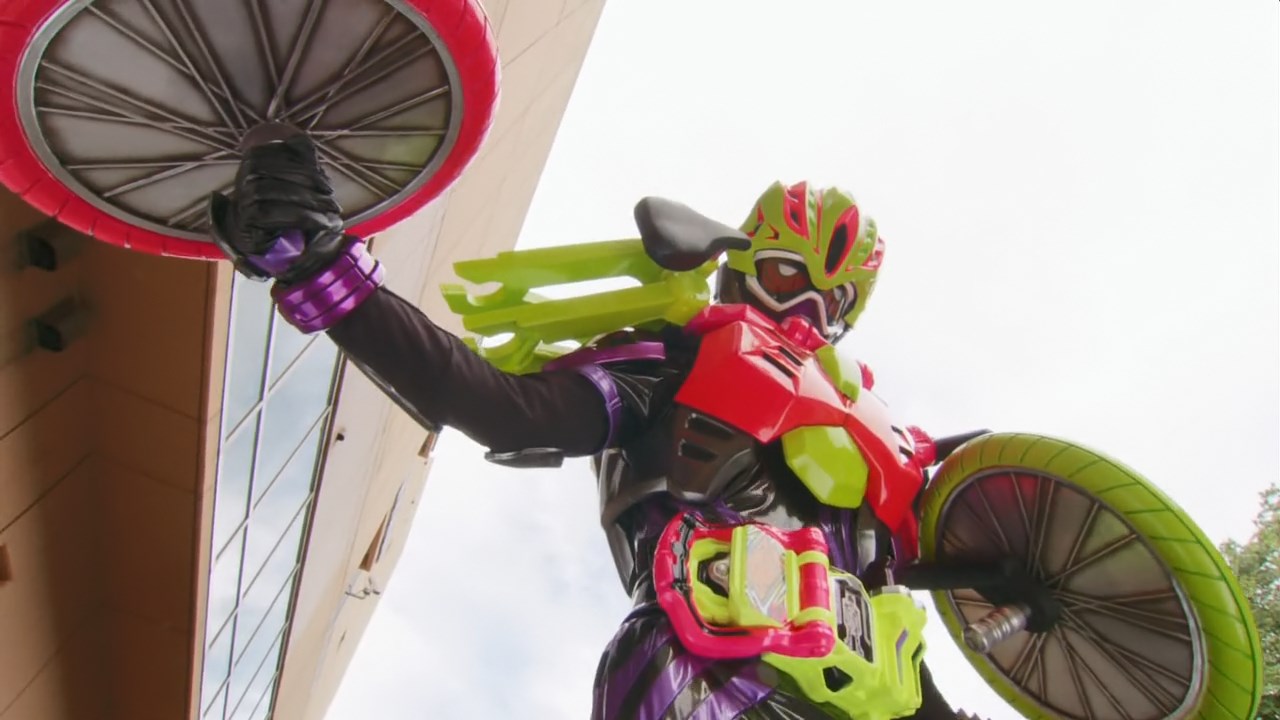 "Shadow the Hedgehog wishes he could pull off neon colors like I can."

Since we're only five episodes in (perfect time to catch up!), it's still too early to tell whether or not Kamen Rider Ex-Aid will be a great series or an awful series. If nothing else, though, I can say it's a fairly creative series that fans of video games will be able some goofy fun out of, even with the medical and superhero drama going on alongside it all - and that's all the more so with the upcoming theatrical release of Ex-Aid's crossover event with Kamen Rider Ghost and Pac-Man, which really is going to be a thing and no I am still not over it.

All in all, if you're looking for a silly little pick-me-up or just a good time for no real reason, I would highly recommend seeking out a way to LEVEL UP today.