We want your Pokémon trainer cards and hype

Bump before I get started for the weekend!

We're a little less than two weeks away from the release of Pokémon Sun & Moon. Game Freak's latest entry on the monster collecting and battling series which has already gone gold. This latest entry is generating a lot of excitement amongst even the most jaded of Pokémon fans. In celebration of Pokémon's newest generation, I'm taking your stuff and putting it straight to the front page! So like last time, your stuff will be going straight to the FP mostly untouched. But this time I'm asking more from you because I have high expectations from you and I know you can do it and I only do this because I love you.

Several months back, I accidentally started a memetoid getting community members to share their trainer cards, fancy little things demonstrating your favorite Pokémon teams in a jpg card. In my experience, the best place to make these custom cards is from pokecharms.com. So yes, to get your words on the FP this time, I'm looking for your own personal trainer cards, plus maybe a thing or two about what you're excited to see in the Alolo region. Here's a little example of what we're looking from you! Yes, you! 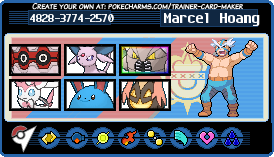 Personally, I'm intrigued by the shifts in the meta that Nintendo has so far officially revealed. The first one being the hints at the depowering of priority moves through revealed abilities and terrain effects like Dazzling and Psychic Terrain respectively. The other shift being the fact that this is the first new generation since X & Y introduced fairy types to deal with the power creep presented by dragons, fighters, and dark types. Now with a new generation comes a new flurry of brand new Pokémon to demonstrate the newest meta for the type chart.

So you see, ideally a trainer card and a sentence or two describing what your excited about for Sun & Moon. Simple really! Pokémon Sun & Moon releases the 18th, so here's to hoping we can get some good stuff this week. See you guys later, and train on!