Games I Played In October: A Brief Overview

Guess who got laid off in October? THIS GUY! Among other things, it gave me time to paint Space Marines and play video games.

Come to think of it, there were no "other things", as playing video games and bitching about miniatures are basically all I have been doing for the past month.

Anyways, here are the games I played and my certified opinions about them.

The most disappointing release in the whole series. Cossacks is an old school RTS about combat in the early modern era, though Cossacks 2 tackled Napoleonic warfare (and did that fairly well). Cossacks 3, however, is a unfinished mess that's horrible in the campaign and not much more fun in skirmish. C3 would position itself as a more hardcore version of Age of Empires, but it's barely functional. Much like AOE and other 'old school' (read: never learned anything from Dawn of War/Company of Heroes) RTSs, Cossacks has you build units one soldier at a time. The difference is that you can form them into units via the application of an officer and a drummer. Unfortunaly, this only works to give you neat looking squares in parade formation; as soon as the battle is joined, the lines collapse into a single point where your soldiers will be clipping through each in an effort to stab at the enemy. This is actually worse than AOE combat, because it looks ridiculous. And if you don't have two lines of infantry forming a singularity, then you have soldiers running off to chase individual enemies with no regard to formation. 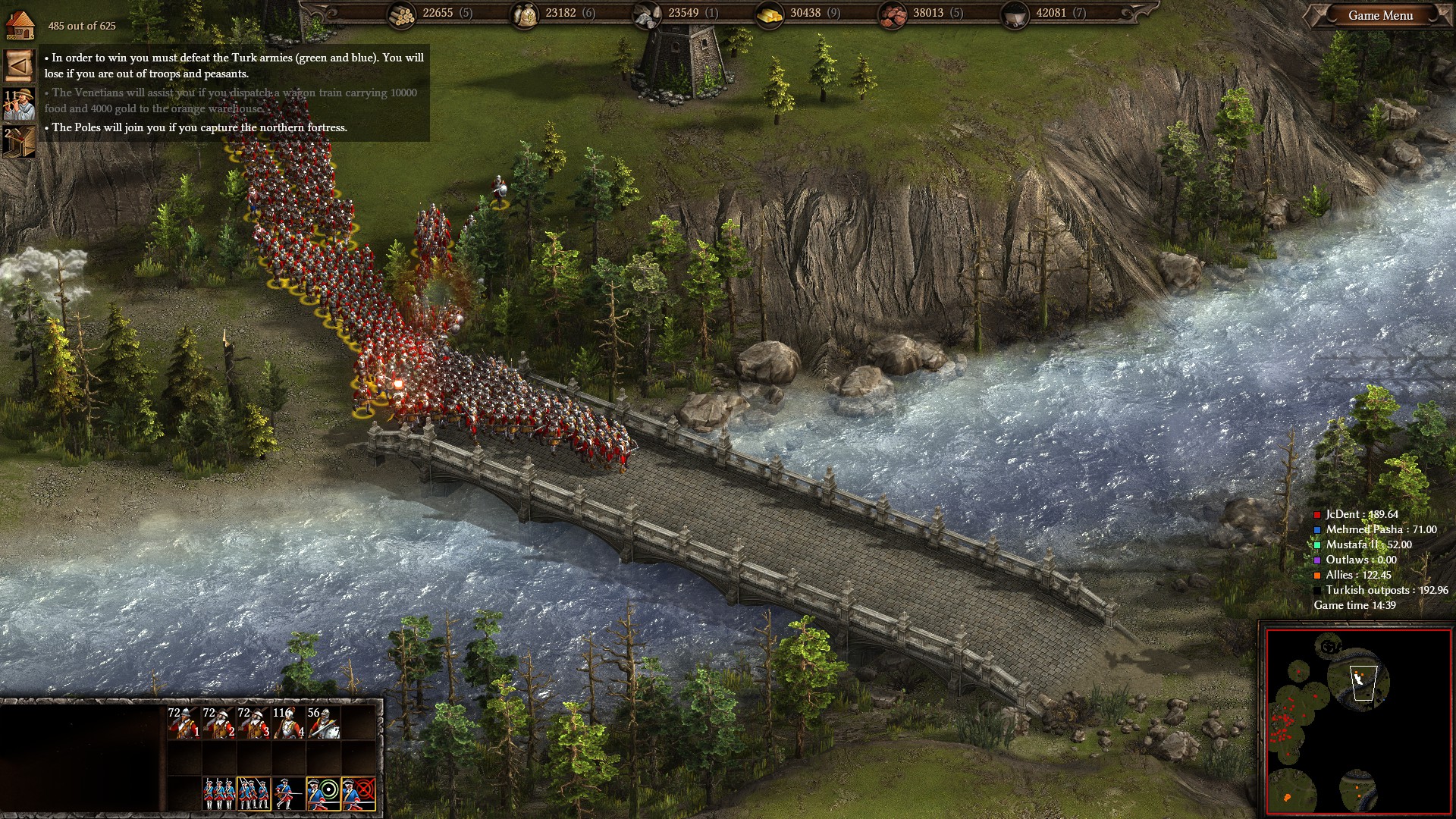 A bridge of voe and idiocy

Then you can add in such insults as anti-building-only mortars being a better anti-infantry option than the frankly useless howitzers because of their rate of fire and deviation (so that you end up shooting up infantry near the buildings), the AI that can't see through your mortar abuse and the fact captured research buildings are useless to you since their bonuses only affect their own nation (yes, even healing). 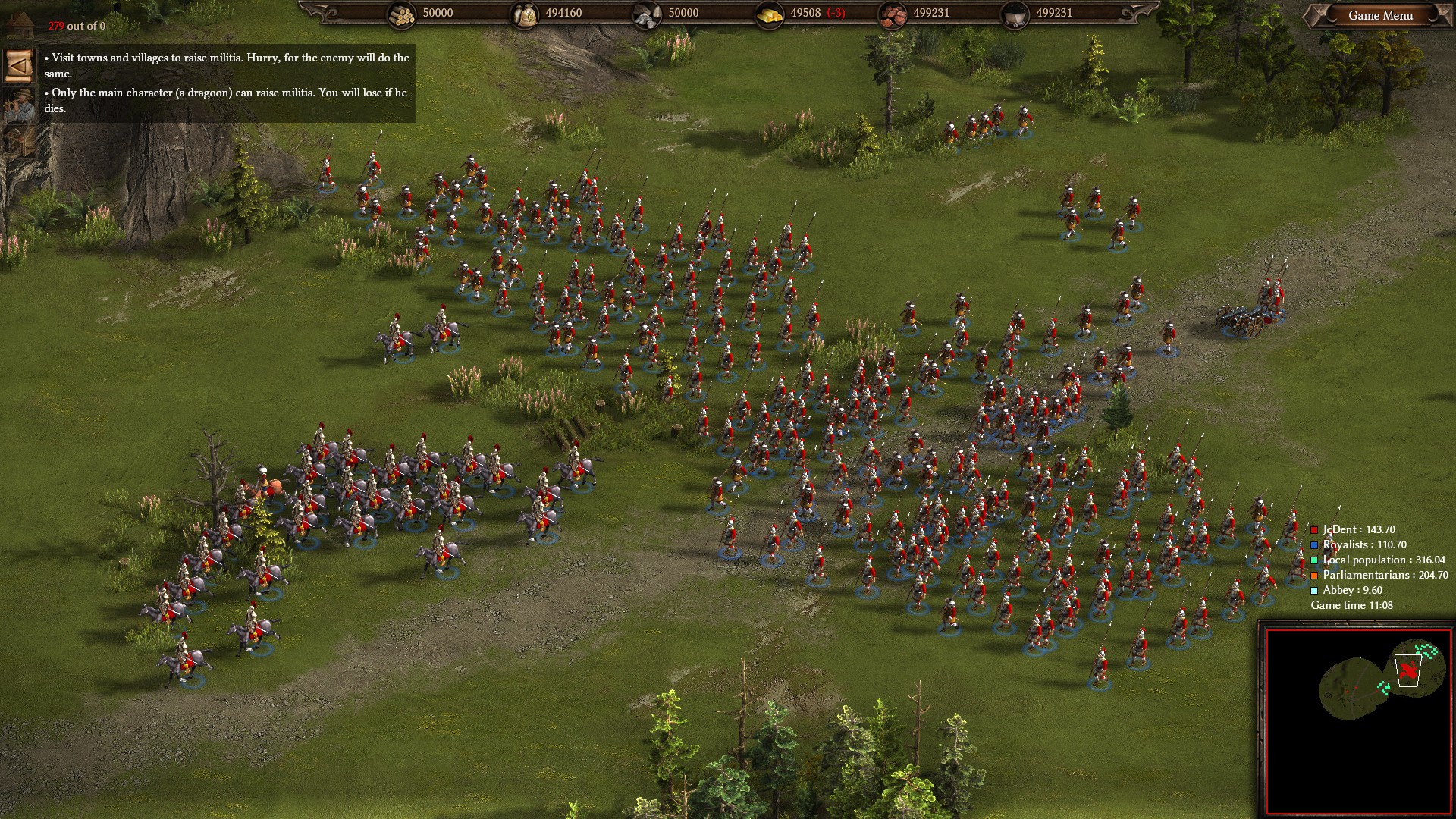 A fairly boring game about traveling between map points in the Arabian peninsula, seeking treasure, dodging djinns and working towards lifting a curse cast on your native city. The art isn't that good, the combat is a pretty lacklustre affair that merges rock-paper-scissors with dice rolling, and it's a generally boring trading game that only stands out because of the setting.

You want to compare it to King of Dragon Pass or Banner Saga, but it's neither of those games. For one, it hasn't been released yet.

You will take the leadership of a town of Danish (for now) norsemen and bring it to glory or something. You do this by setting work allocation for the year, watching the autumn, winter and spring pass by while giving you text quests until you eventually reach the summer again. Then you sail up the great whale road in search of trade, diplomacy, combat and adventure.

By far the iffiest part of the game rests in combat. Moving people around a hexagon arena isn't that hard, the trouble is that your reinforcements rest on the luck of the draw. Each turn, you can discard and draw new cards, so how you fare depends on your companion cards appearing when you need them. Sure, the size of the board and the nature of the card boosts means that you have some breathing space before the enemy is there to punch you in the face, but it's a close shave anyways.

Maybe it will get better by the time of the release.

Living the dream of everyone who had even bought games in a bundle, I finally had the chance to play and finish one of my old purchases, which also scratched my FPS itch. Sure, I got the Battlefield 4 DLCs when they went free in time for Battlefield 1, but I'd rather shoot some bots than submit myself to level 50 snipers. FEAR 2 is definitely better than the third instalment, and it's a pretty solid FPS game. Sure, it has sever levels, keycard hunting and QTEs, and the characters don't get much in the way of development, but the Replica forces are fun oponents, and Alma transforms from a creepy young girl into a hot dead nudist. 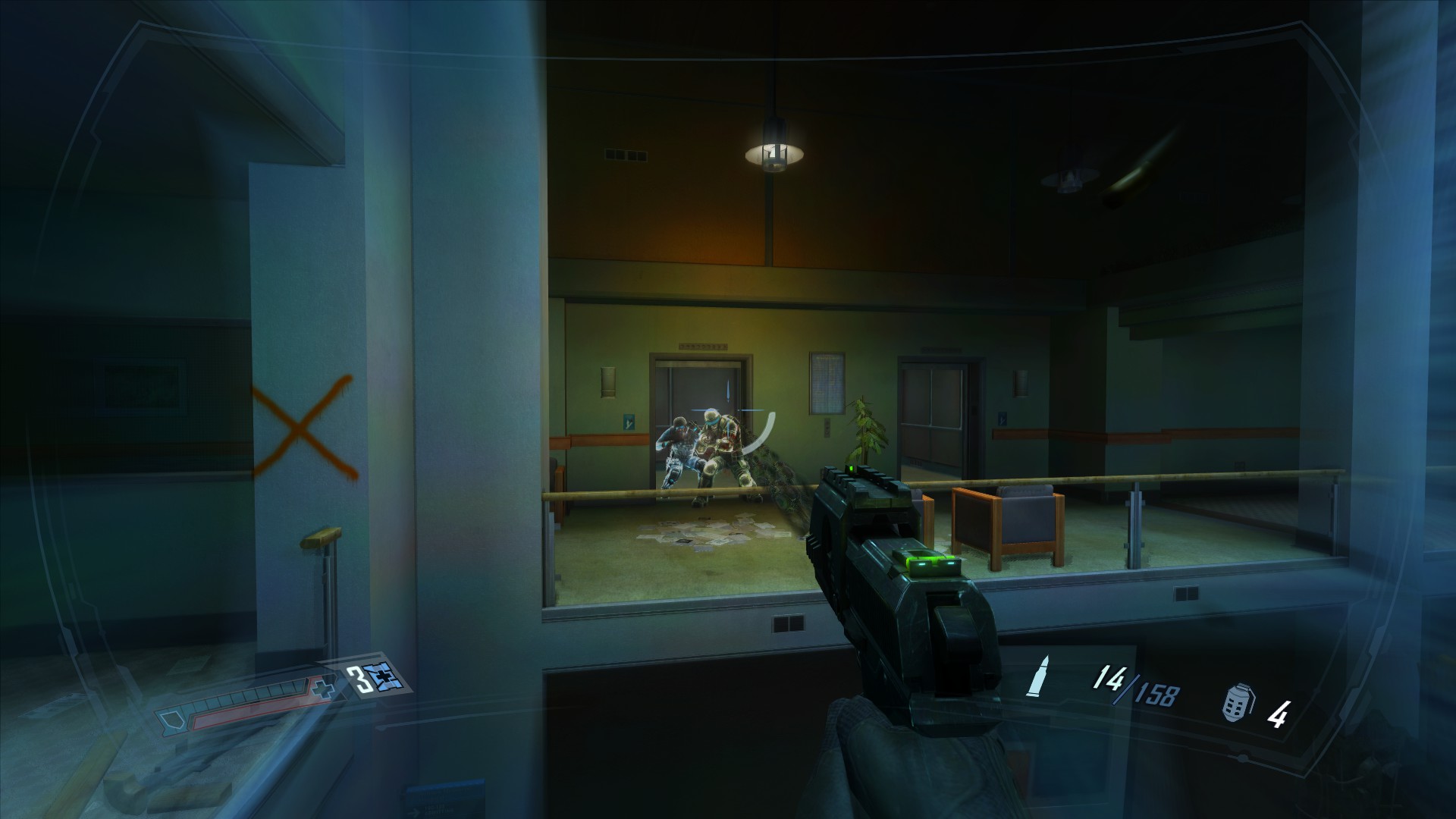 The peen is bad, the peestol is good

I have some issue with the fictional guns in game (and the napalm cannon being useless), but it's an otherwise solid entry with a surprise ending.

Israel and Netherlands DLCs were in a cheap budle, so I downloaded it for the Jew jokes and ended up not playing that much of Israel or the Democratic Tulip's Republic. Sure, israelis came with their infantry transporting tanks that weren't afraid of anything and having more Shermans in game is funny, but my real passion is building army lists. Boring army lists, at that. The game lets you choose between BLUFOR (basically, NATO and friends) and REDFOR (USSR, China, Best Korea), after which point every additional selection gives you certain benefits and drawbacks. Building a deck from a single nation (instead of, say, the entire BLUFOR roster) unlocks certain "prototype" units. And if you narrow the deck down to, say, motorized infantry or armor, then you have additional deck building shenanigans. Lastly, you can choose an era (Pre-1980s, pre-1985 or anything goes), which can give you more of the older, shittier units. So I set out to make a list for every combination of this. I think I got through France, USA, UK, USSR, DDR and Poland before I deleted the game. 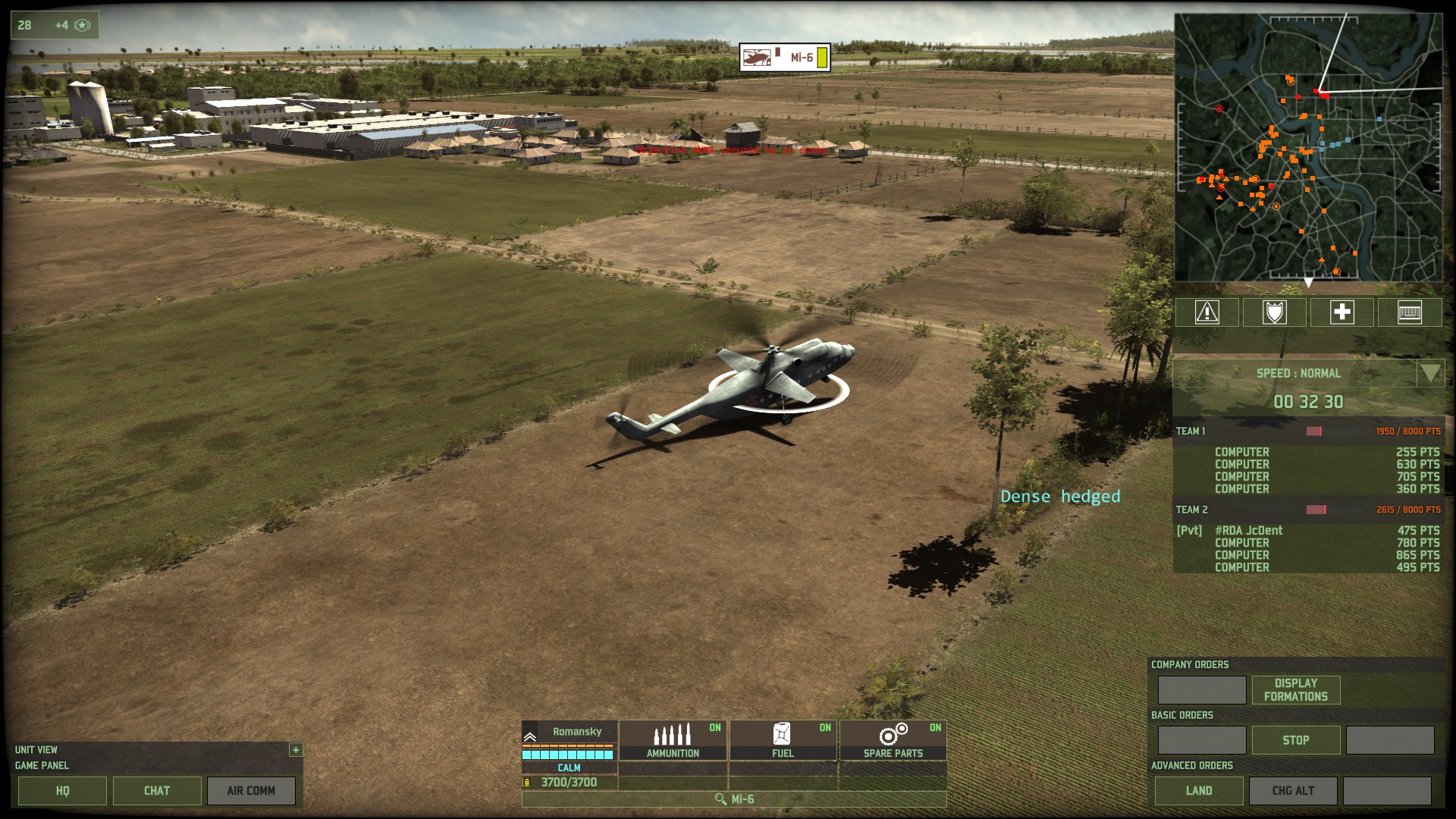 Mi-6, The Terrain Feature That Flies

I played a few matches, too; mostly compstom, because multiplayer turns to be Jc-stomp all too often. Wargame is fun to play, but you don't have the time to get close to the action (or feel close to your units), and it's not exactly that realistic. But it's a good game available at a good price which lets you experience a historical era often overlooked in RTS games. 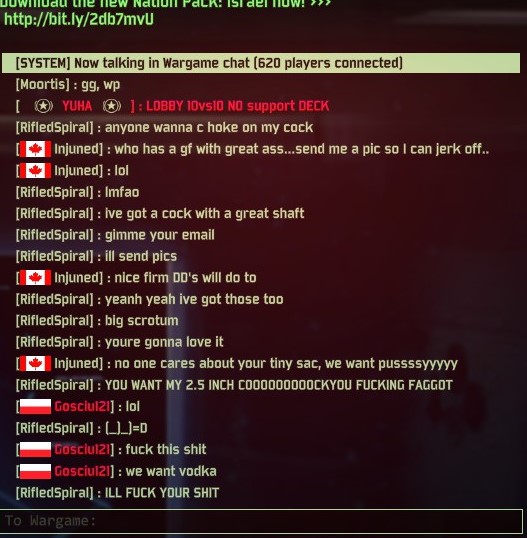 Some people believe that Wargame: Red Dragon is the best DLC Wargame Chat had ever got.

Whoever runs the review-copy handing-out at FOCUS is certainly a cool person, since my review copy updated itself with the DLCs for free. I feel like the Tau are really easy to play in comparison to others, but, again, I spent most of my time playing with other races. Almost tried multiplayer, too! 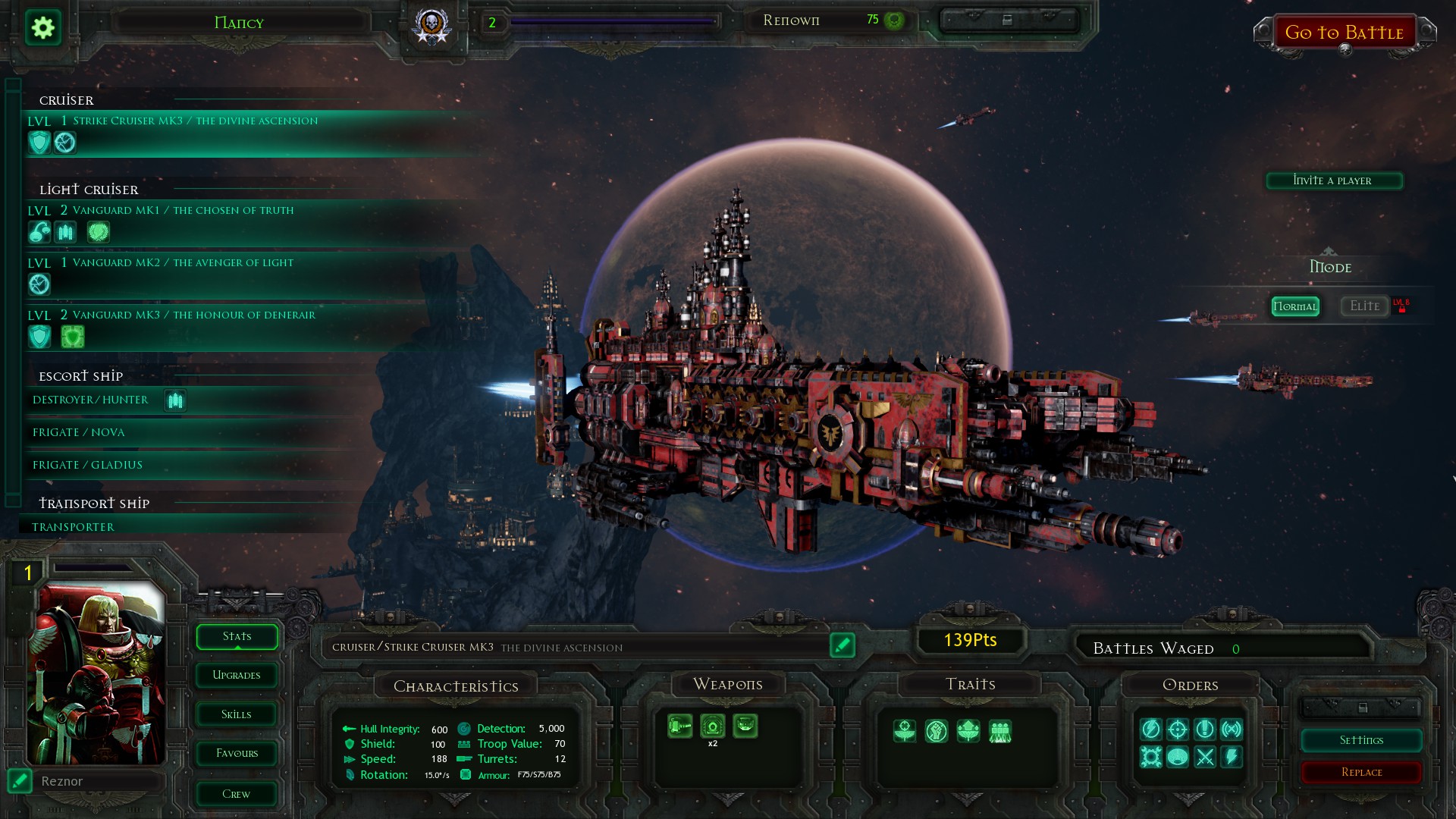 TAHIRA: SHADOWS OF THE ASTRAL EMPIRE

What if your game was an long sequence of Banner Saga combats stringed together by some dialogue and even a choice or two? That's what you get with Tahira. I find the combat generely enjoyable and the character portraits generally bearable (even though Hammer invites "German olympic contestant" jokes from the Cold War), though I'm probably not that far into the game. I am having fun slaughtering Astral Empire soldiers in numbers that should give anyone pause, tho. 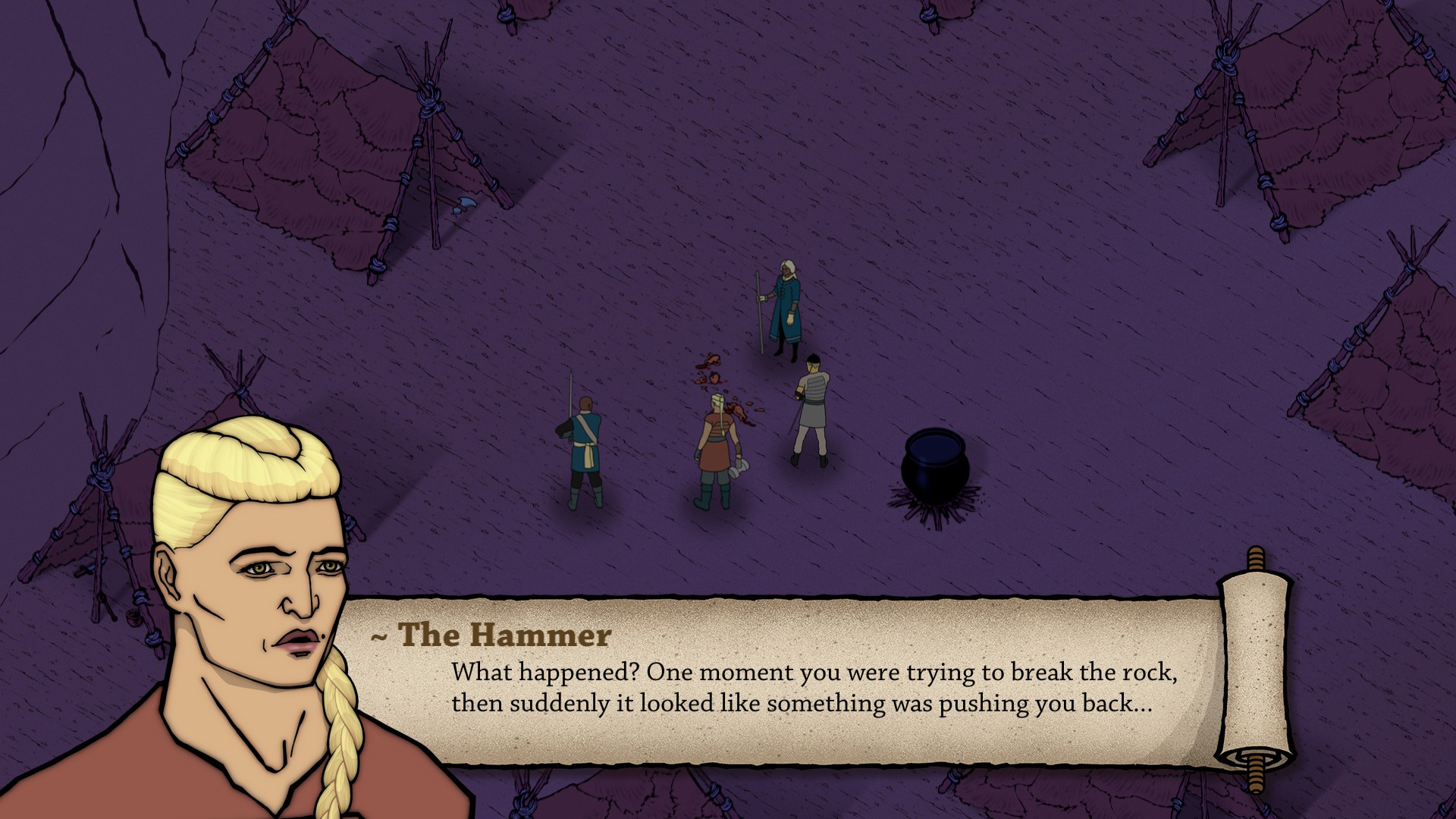 Wasteland 2, Pillars of Eternity, Shadowrun: Hong Kong are just some of the RPGs I haven't had the time to finish. Well, I do now! I already rolling in the end-game content - the game dropped the ever so subtle hint that I won't be able to do my quests after a certain point - and I finished three of the companion quests. Dragonfall was probably the better game, if only because people didn't vomit text at you all the time, but I'm still having fun, even if a shaman character somewhat curtails your options in combat. On the other hand, you do want your etiquettes and dialogue options, so you have to go the charisma route. Sadly, there's not that much freedom in chosing your team in Shadowrun if you're not a decker, because you'll always want to have one in your team, and Is0bel fills that need in spades, especially considering that she's lugging around a GRENADE LAUNCHER. 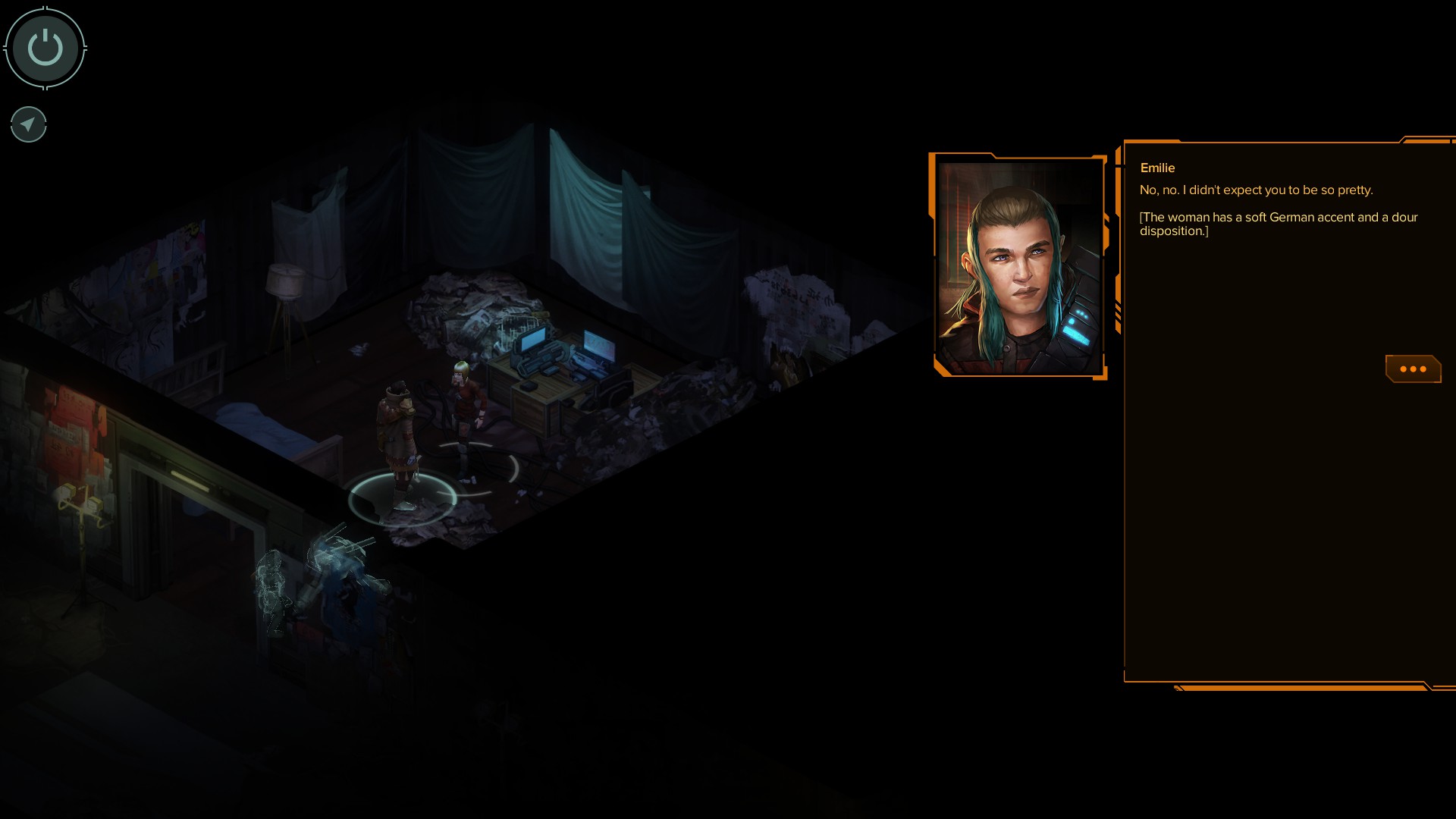 The only good thing to come out of the whole End Times thing, it's Left 4 Dead: Actually A Fantasy Rat Killer. Ratmen are a much more interesting fore than just zombies, and walking down the streets of an Empire city is always a nice experience. Slice, dice and shoot your way through hordes of ratmen (and I guess zombies, because there's Vampire DLC I don't own), either with computer companions or online randos. Either way, it's a fun 15 minute or so romp, even if Stormvermin (armored ratmen) spam is probably the biggest threat in the entire game. 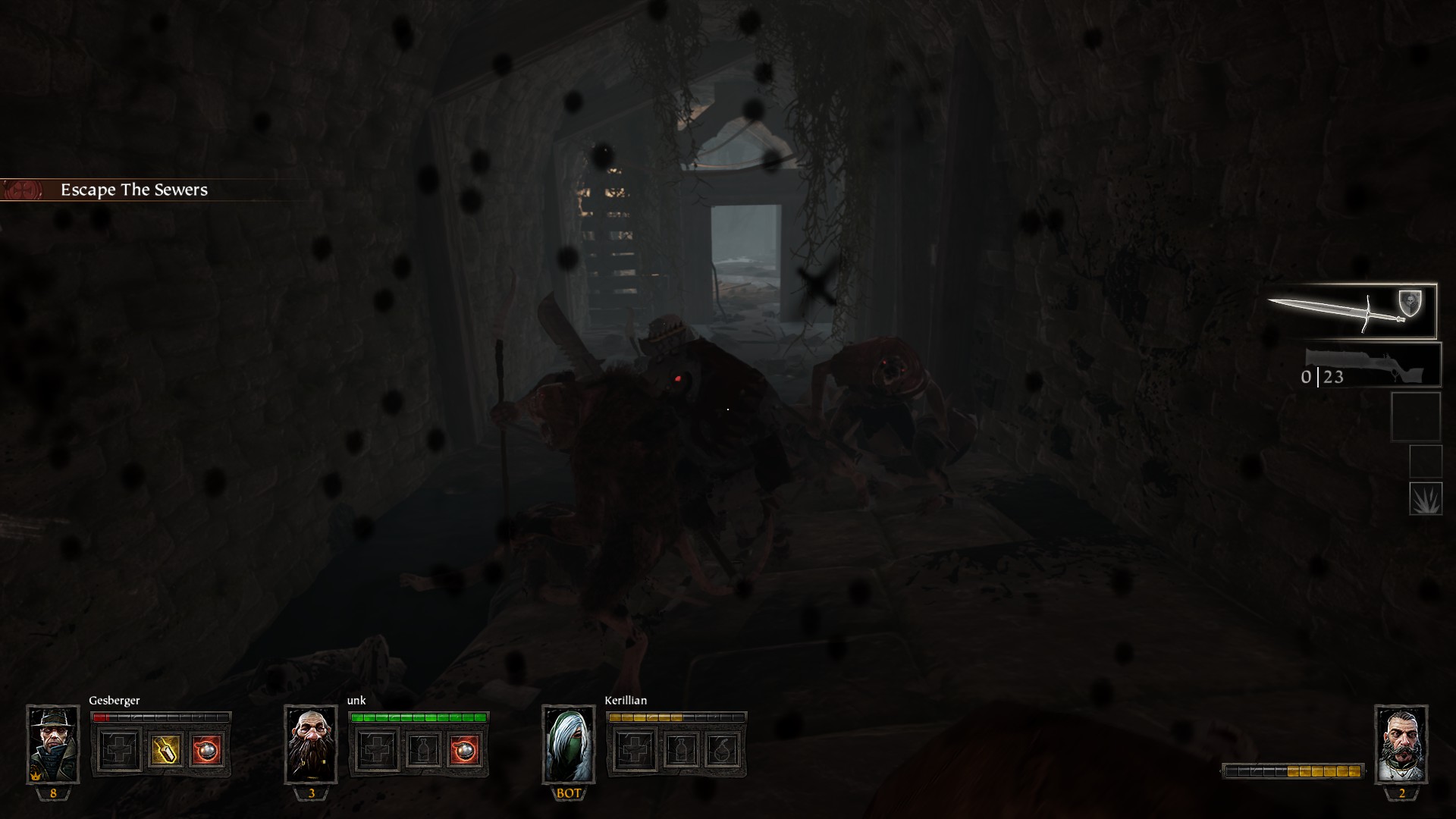 Playing Vermintide you might have the feeling that you're constantly fighting a never-ending horde of your exes.

And there's an entire map that's just a sever level, which is not cool. I bet it was made by the same people who think that Metro is a good Battlefield map (it isn't).

Inb404 comes this Steam Sharing gem. It's better than Civilization V in every way while also having some of the surprising kinks of the previous game. Why do I not have an indicator of what trade route my trader was previously plying? Why do I still get units dropping their movement orders because an another unit has been ordered to go to the same hex, when that hex is still turns and turns away? 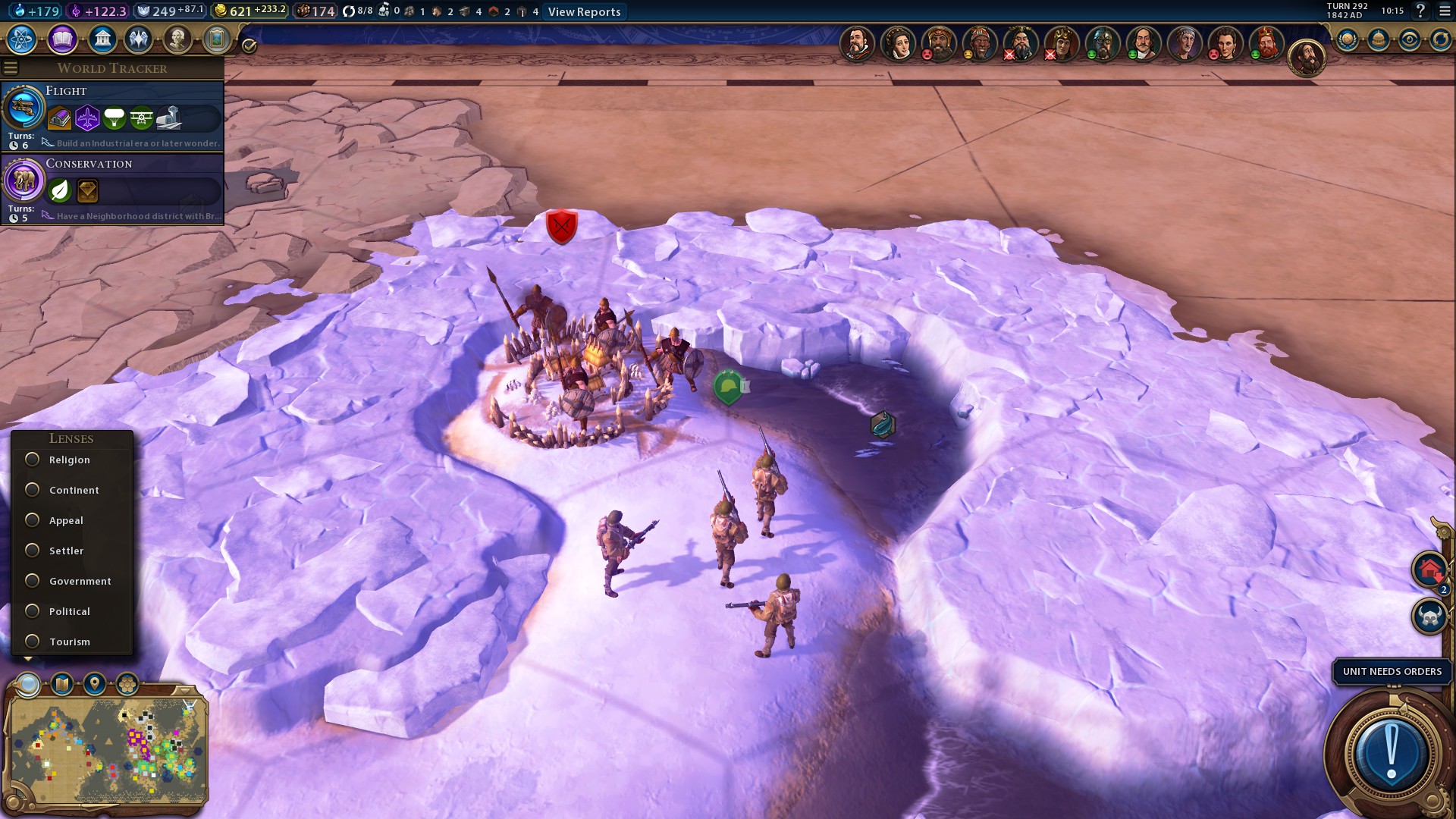 Found a super primitive encamped located in the northernmost inhabitable reach of the world. No survivors.

Anyways, it's pretty fun so far - Sean Bean is a perfect guy to read the quotes - and the return of a more normal diplomatic system (along with the 'friendship' bullshit) is a welcome change. I wish there was a bigger indicator of change between the eras but that is about all. It feels like everything in the game takes longer to produce, especially when you're building the new districts, though. 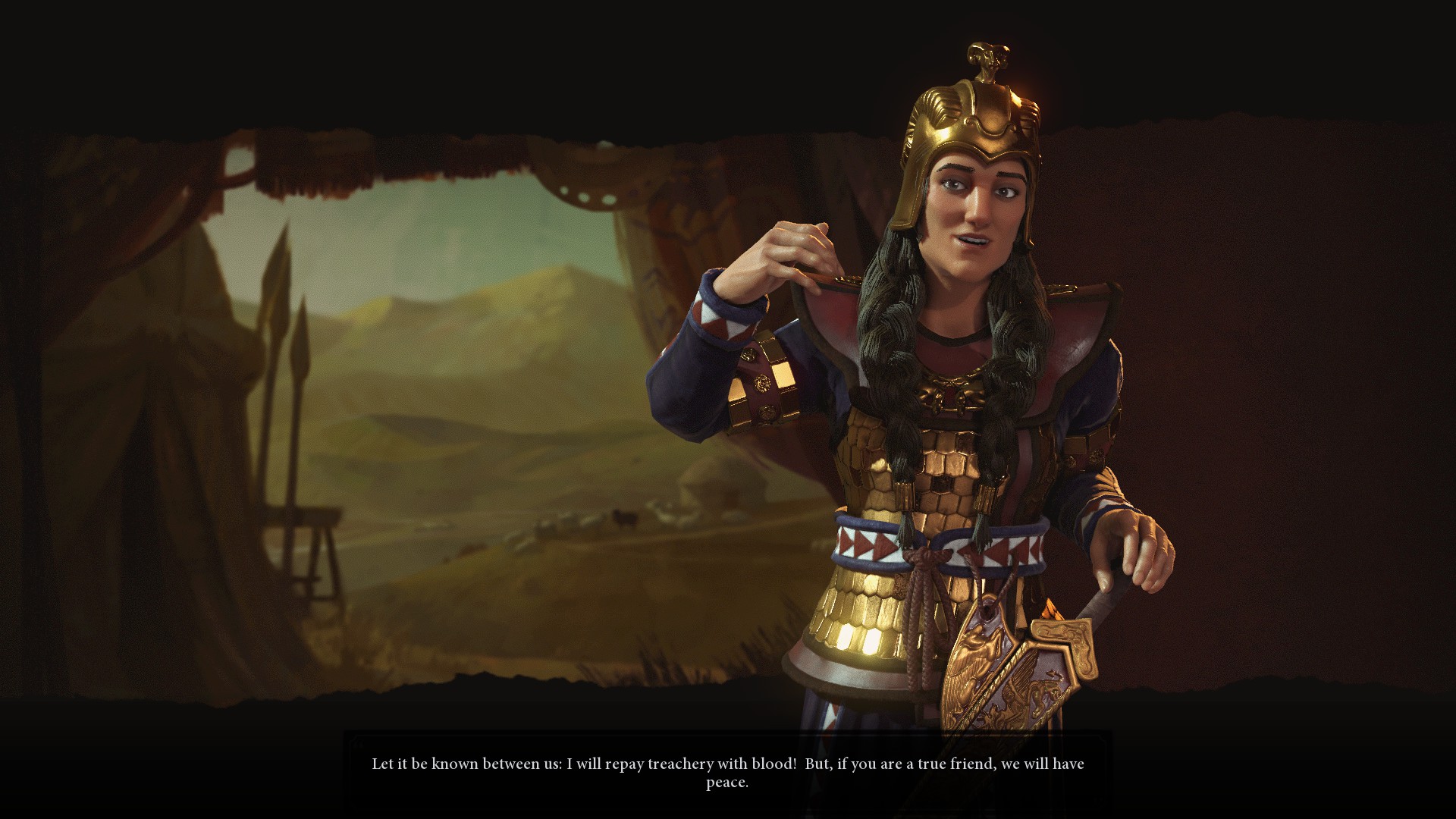 The most horrible thing about the diplomacy are all the leader quotes they didn't voice. How hard could it have been to translate and voice act five to ten more lines?

Have your own stories to share? Disagree with some or all of my opinions? Bored? Write in the comments below, I can't answer you anyways.