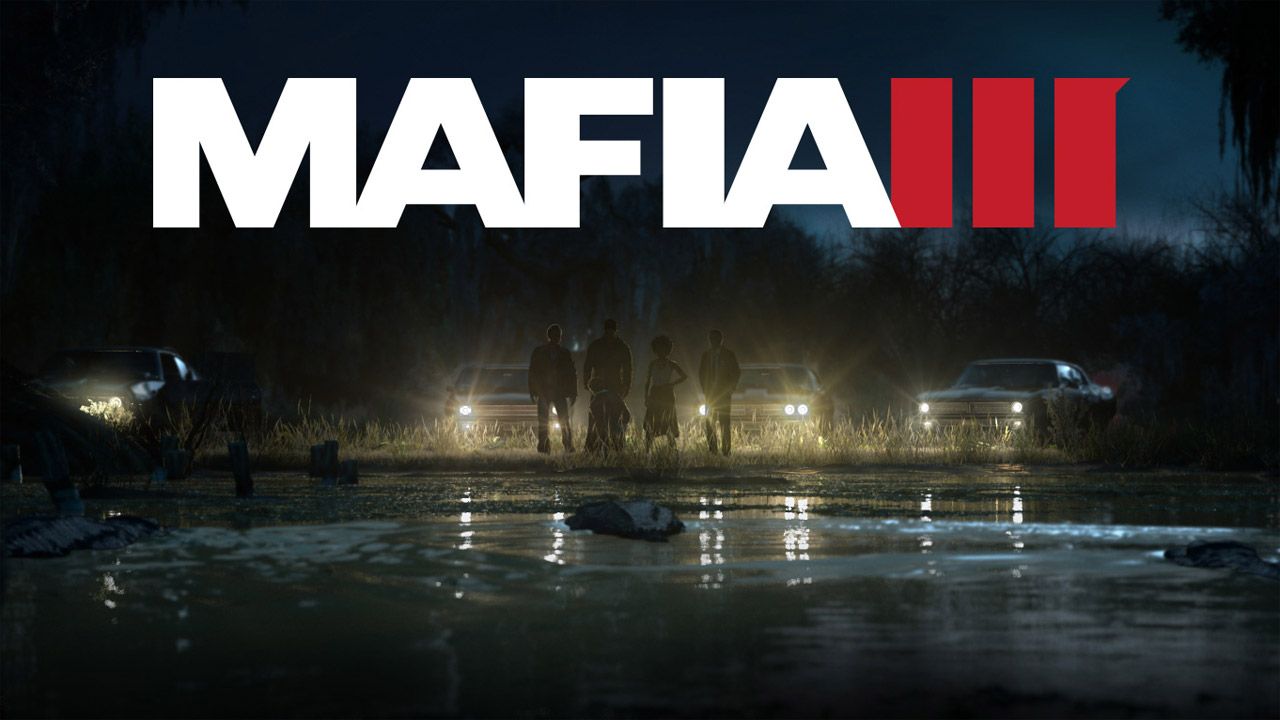 Mafia III is a game that I had absolutely no expectations for when it launched. I've never played the previous entries in the series and I had seen only a couple of small pieces of promotional footage for it, primarily showing the ability to feed your enemies to swamp gators. I ended up grabbing it purely because I had been in the mood to play a new 'city takeover' styled game. What followed was one of the more divisive experiences I've had in a while.

To set things up for those unaware — Mafia III follows the story of Lincoln Clay, a Vietnam vet of (implied) mixed descent. Raised as an orphan, Lincoln got caught up in the criminal underbelly of New Bordeaux, Louisiana at a young age, falling in with the “black mafia” led by one Sammy Robinson. The game begins with Lincoln returning from the war, hoping to see his 'family' one more time before leaving to start a new life in a new place.

Those plans fall apart when he learns that Sammy has fallen on hard times, owing money to the wrong people. To help pull his surrogate father out of trouble, he agrees to join mob boss Sal Marcano in robbing the Federal Reserve, which Sal claims will set he and Sammy square. This sets forth a chain of events that changes Lincoln Clay and the city of New Bordeaux forever.

The story presented — and the characters who populate it — are easily the strongest part of Mafia III. It's an excellent, well told story of revenge and coming to grips with the way the world works. What makes it even more fascinating is that it's told in a documentary format, made up of interviews with Lincoln's friends and an FBI agent who's been after him since the game's events took place. 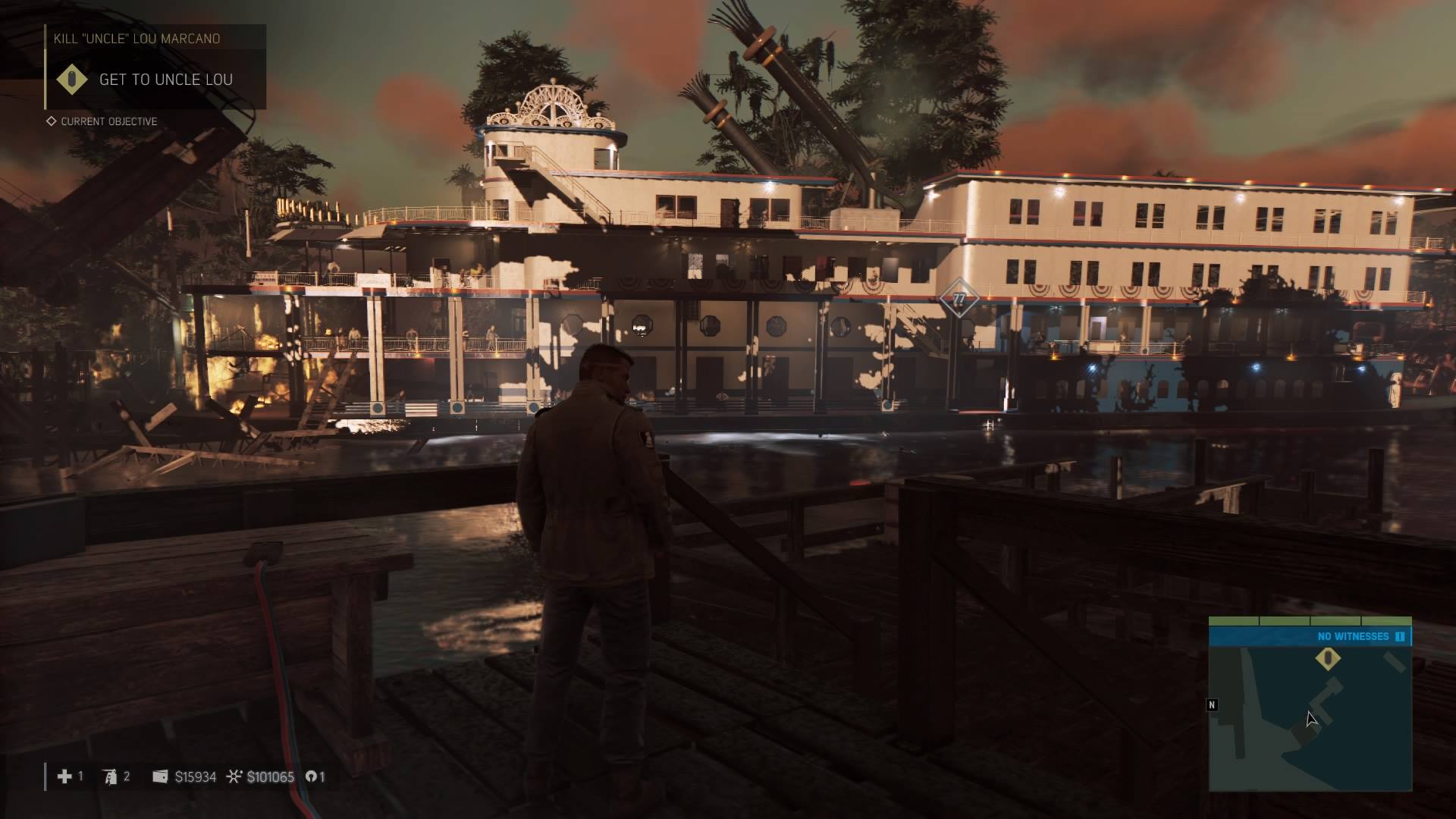 Having the story follow a black man in the '60s in the American south also presents a very unique opportunity to place players in a world that often spews flat out hatred at the main character. It's an experience that feels authentic in that regard, and it doesn't shy away from showing how unabashedly racist many people of the time were. Getting to turn the tide and release these bigots from the mortal coil was a particularly satisfying part of the game.

As you take the city back from the scum that follow Sal Marcano, you'll recruit your own group of underbosses: Cassandra - leader of the Haitian outfit, Burke - leader of the Irish mob in town, and Vito Scaletta of Mafia II fame, who has been shipped down to New Bordeaux to keep him out of sight, out of mind. Every time you take over part of the city, you'll assign it to one of these three, gaining favors in the form of personal upgrades and new weapons.

This is where the game starts to feel as if its execution wasn't up to snuff with its ideas. At its core, this is the same sort of city takeover game that you've played before in GTA, Saints Row, and others. Unfortunately, it fails to distinguish itself in this aspect. Nothing about the gameplay is particularly broken or ineffective, it's just unremarkable. The shooting and driving are solid, and the design of the city is superb, but there's nothing noteworthy to do in it. There's plenty of content here, make no mistake, but 90% of it boils down to: drive to location, kill everyone there, pick up the literal stacks of money that have been left just laying around, repeat.

If you're like me, much of the “kill everyone there” part will be done utilizing the game's stealth element, which has you traversing cover, whistling to attract guards, and using silent — and very brutal — takedowns to thin their forces. If shit does hit the fan you'll discover two things: Mafia III's AI isn't the sharpest tool in the shed, but when it does decide to sneak around on you... well, your health bar won't last long, regardless of how many upgrades you've got for it. 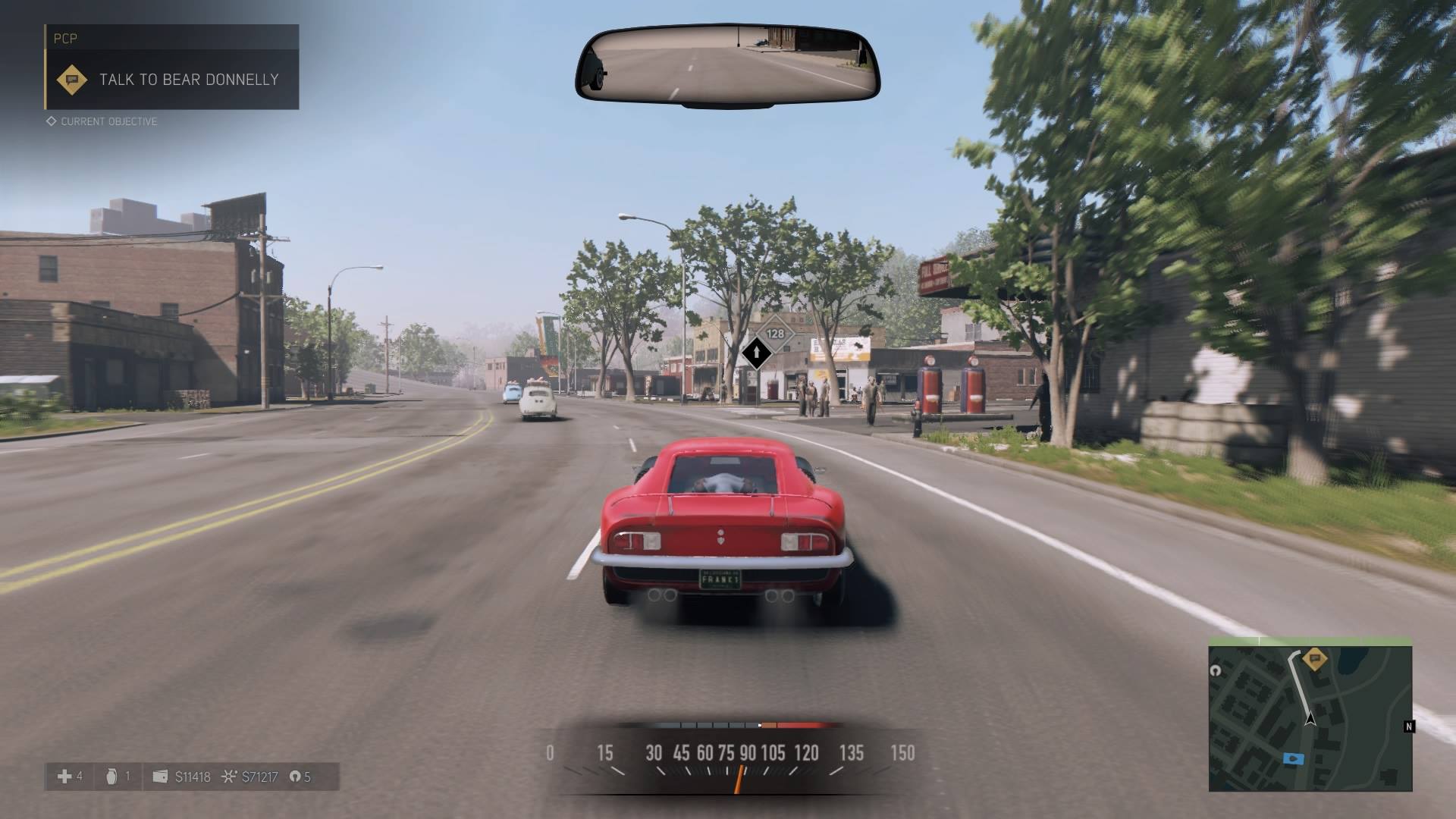 Aside from doing that over and over again, you're pretty much just left hunting down collectibles across the city. Playboy magazines, album covers, and Vargas pin-up girls litter the city, which is fair enough, but they also made the strange decision to tie one bit of gameplay into a collectible. Throughout the game you can find pieces of electronics that can be used to wiretap parts of the city. This will show the location of all collectibles in the area on the map, but more importantly it allows you to “flip” the boss of whatever racket is being run there instead of killing him, which means more money for you. A cool idea, but there are a lot of wiretap locations in the city, and every single one requires three of these electronics. They're found everywhere, but that means getting out of your car every time you drive 10 feet to pick one up. It would have been a lot more bearable if it only took one piece each and those pieces were a bit more scarce.

That's about it for the gameplay. There's just no real variety to what you do in the minute-to-minute. Mafia III would have benefited tremendously from some more creative mission types, and it's a shame that they're nowhere to be found. There are a couple of side missions that will lead you down to the bayou to bring back a shipment of weed, a semi-truck, or the like, but they fall into the same boat. You go down, kill everyone, grab it, and leave. Once you've picked up your objective and started heading back, it's a long, uneventful drive to whatever location you're going to drop it off at. No one gives chase or tries to get in your way.

It's the kind of game I'd probably recommend just following the primary story in, but to progress in the story you have to do a lot of these samey objectives in each part of the city to get the boss of the area to show himself, so there's just no avoiding it. It's unfortunate, and while it doesn't ruin the overall experience, it certainly hampers it.

And this is all without mentioning the technical problems that you could come across while playing. Over the course of the fairly lengthy time I spent with it on PS4 I had two crashes, my fair share of framerate drops (usually while driving), and one instance where I fell through the world — something that I'm fairly sure hasn't happened to me in a game in years. There's also plenty of the usual open world glitches, my favorite of which was occasionally seeing people drive down the street with their car doors wide open. 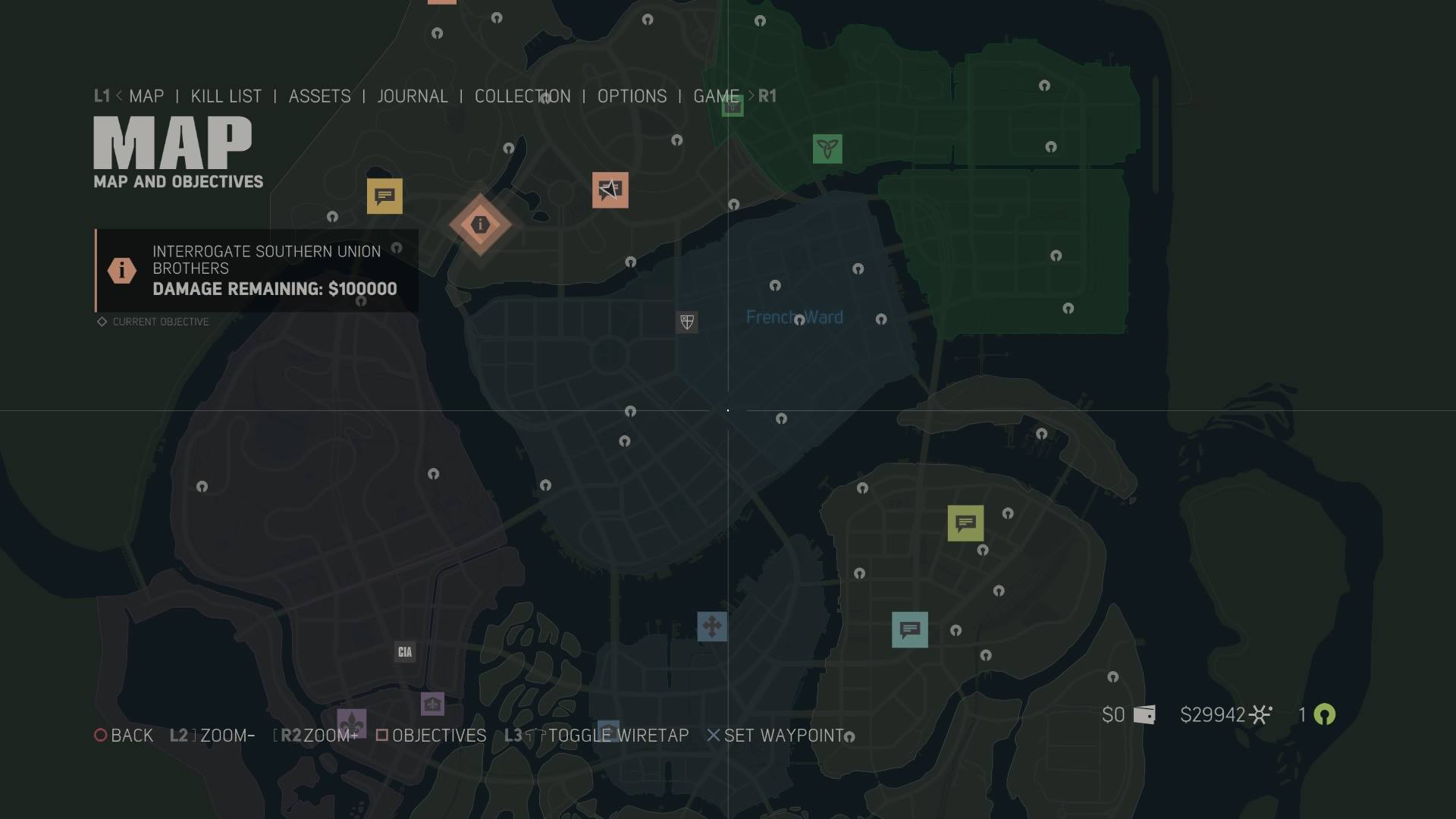 Like most games of this mold, Mafia III has a respectable collection of licensed songs that make up its radio stations, providing something entertaining to listen to while you're driving across the sizable map. This is another way in which the '60s setting of the game adds to the experience, because it means that the soundtrack is made up of classics from the likes of Jimi Hendrix, CCR, and Three Dog Night. There's a fantastic collection of music here, broken up on occasion by surprisingly well done fake advertisements and quick news broadcasts. Unfortunately, the strong soundtrack is noticeably lacking from most of the time you spend on-foot in the game, outside of a couple of story missions where one of the licensed tracks will pop back up.

In the end, there's a lot to like about Mafia III, but there's a lot to shake your head at as well. The setting is great, the story is interesting, and the writing is solid. There's a great bit where Father James is trying to convince Lincoln that he doesn't need to follow this destructive path he's on, despite Lincoln's claims that this is just the way the world works. Father James looks him in the eyes and tells him, “If all you ever look for is evil, it's all you gon' find.” Moments like these, where you see the emotions that these characters keep locked away in them, are what made Mafia III memorable for me. It's just so unfortunate that the gameplay doesn't have a bit more meat and variety to it.