Very recently, a new anime season has started. What this means is not only that we get a lot of new anime shows to watch or not to watch, as I am admittedly not very interested in anything aside from the new Gundam season, but also that a lot of shows from the previous season are coming to an end. One such show that has ended very recently is Kuromukuro. It has been one of the very few shows last season that have actually grabbed my attention and I ended up liking it a lot. I barely ever see anyone taking note of it, despite half of it even being on Netflix, which is what made me want to write about it! 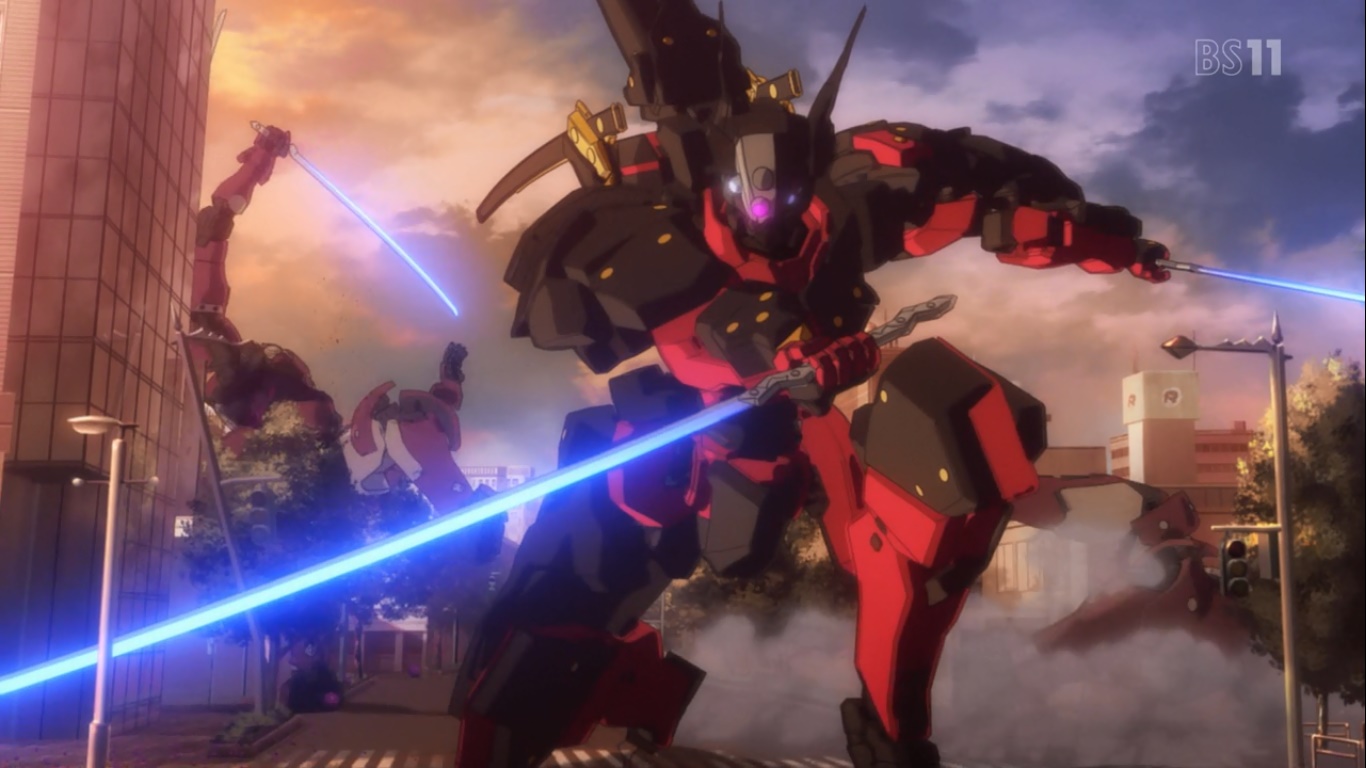 Kuromukuro is, first of all, a mech anime. It was made as a 15th anniversary project by P.A.Works, the studio behind shows such as Angel Beats!, Charlotte, Canaan and Another, in collaboration with Tensai Okamura as the director, whom you might know as the director and original creator of Darker Than Black or also as the director on shows such as Ao no Exorcist and Wolf's Rain. As for me personally, I haven't seen any of his previous efforts, but I know that at the very least, Darker Than Black has a pretty sizable fanbase behind it.

The premise of the story is basically as follows: During the construction of a dam, an ancient artifact was discovered which were then researched and used by researchers to manufacture their own mechs from it. At some point, the planet gets invaded by what one of the main character calls "Oni" (translated as either demons or ogres, depending on if you watch fansubs or Netflix subs), the ancient artifact suddenly turns out to be the titular "Kuromukuro" (or "Black Relic" if the subs I watched are to be believed) and the pilot of said artifact awakens again, to fight against those "demons", alongside the military of today. It's not the most original premise, but it works well and it sets itself up for a fun ride for anyone willing to take the plunge. 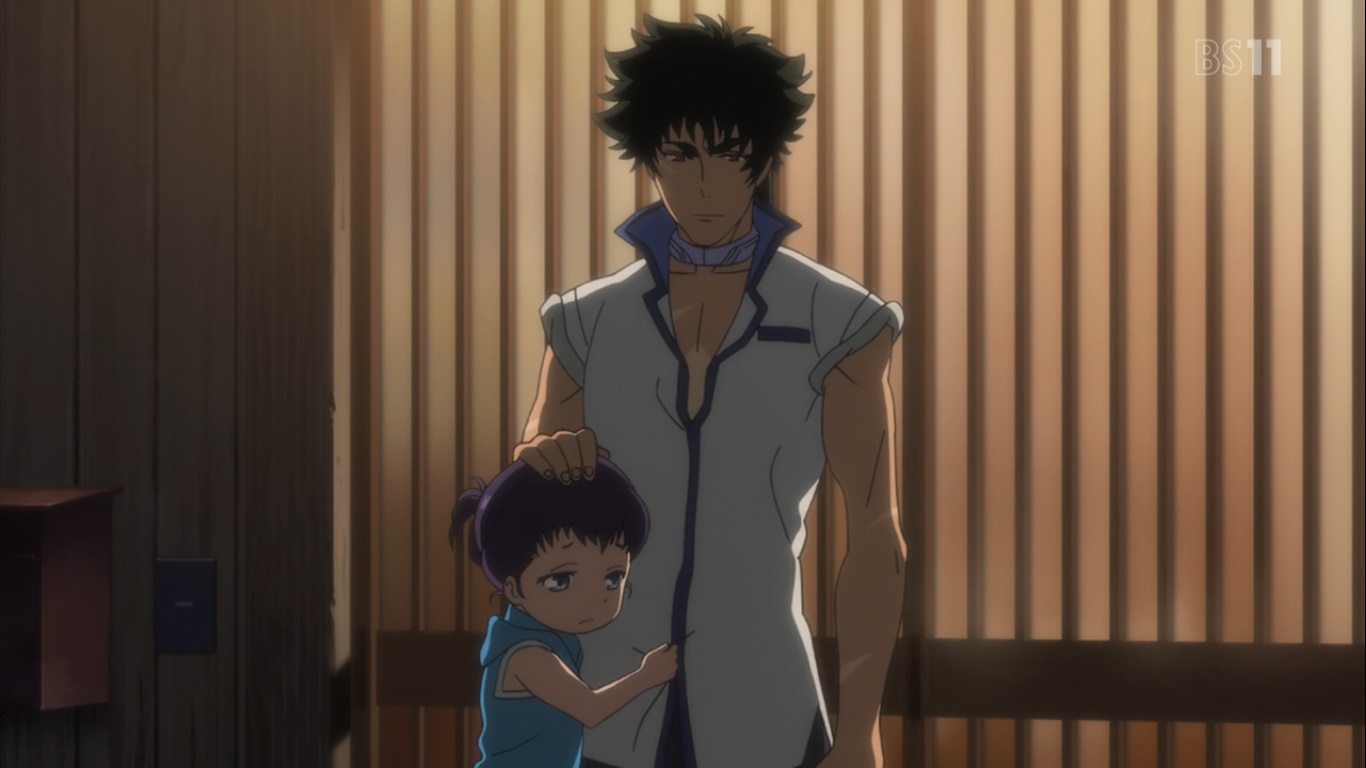 I think this is also a good point to get into the characters because, while they are not super original or anything, the characters are really what make this show for me. For one we have Kennosuke Tokisada Ouma, the pilot of the Kuromukuro, who is also an ancient samurai from the Sengoku era, who has awakened in our time to do his duties once again. Because he is a samurai from times long past, he is of course also not very aware of how today's world works and this sets up a lot of fun little scenes if you're into the "doesn't understand how the world works" kind of humour. For example, in one part he gets a video call from the other main character's mother and he thinks that the phone is her and also calls her "Lady of the box". In another case he gets upset about how actors in a TV show don't fight the way they should and wants to go help them out. He also thinks that cars are "steeds". Stuff like that. If that sounds like what you'd find funny, chances that you'll enjoy this part of the show are very high.

Kennosuke is a samurai through and through. He's not a jerk, but he has a high sense of honor and, his modern day antics aside, this is what I really like so much about him. As someone who is very much into honorable and "knightly" characters, he is one that I was able to get into right from the start and he never really got any worse for me. I just liked him more and more as the show went on. 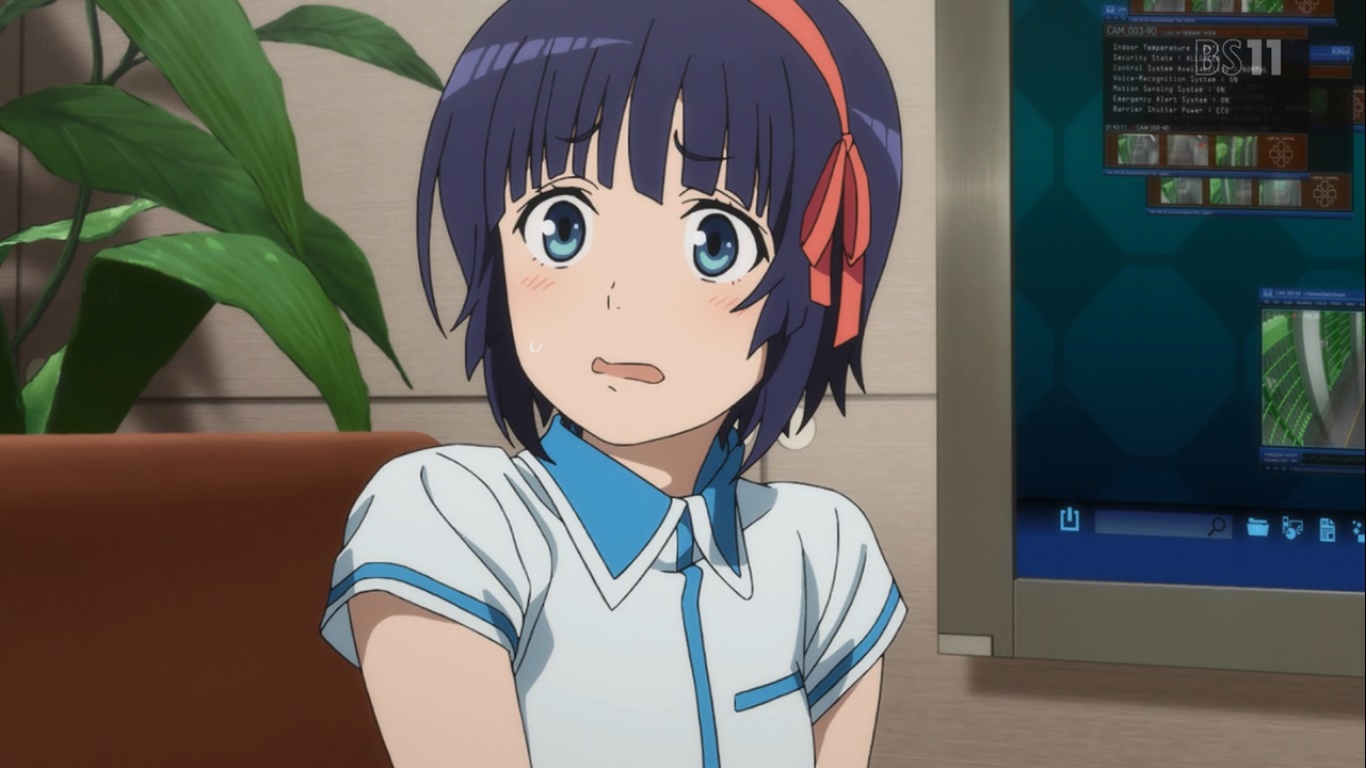 The other main character here is Yukina Shirahane, the daughter of one of the researchers working at the dam. Other than that she's mostly your normal everyday girl, until she gets caught up with Kennosuke and is forced to pilot the Kuromukuro alongside him. She gets in there with him more by coincidence than anything, but from that point on she's the only one who can do it because of how the Kuromukuro works. This leads to her also becoming more affiliated with Kennosuke, who thinks that she looks a lot like the princess he was protecting back in his time, and him going to her school alongside her, as well as starting to live in her home. Since they're then basically forced to spend a lot of time together, they, of course, also become better friends and they kind of have a lot of fights as well. Despite (or maybe because) of all that, they work together very well and are a fun pair to watch with a lot of cuter moments for the two of them as well. It's kind of like with Chidori and Sousuke from Full Metal Panic, only here none of them get beaten up by the other regularly.

While she doesn't really want to pilot the Kuromukuro, she also knows that she has to and even when she has her doubts and kind of gives up for some time, she still ends up returning to it, largely thanks to Kennosuke. The both of them might not be the most original characters, but honestly, I don't need everything to be original - what's more important is that they're well done and fun to watch and in my opinion, those two definitely are. 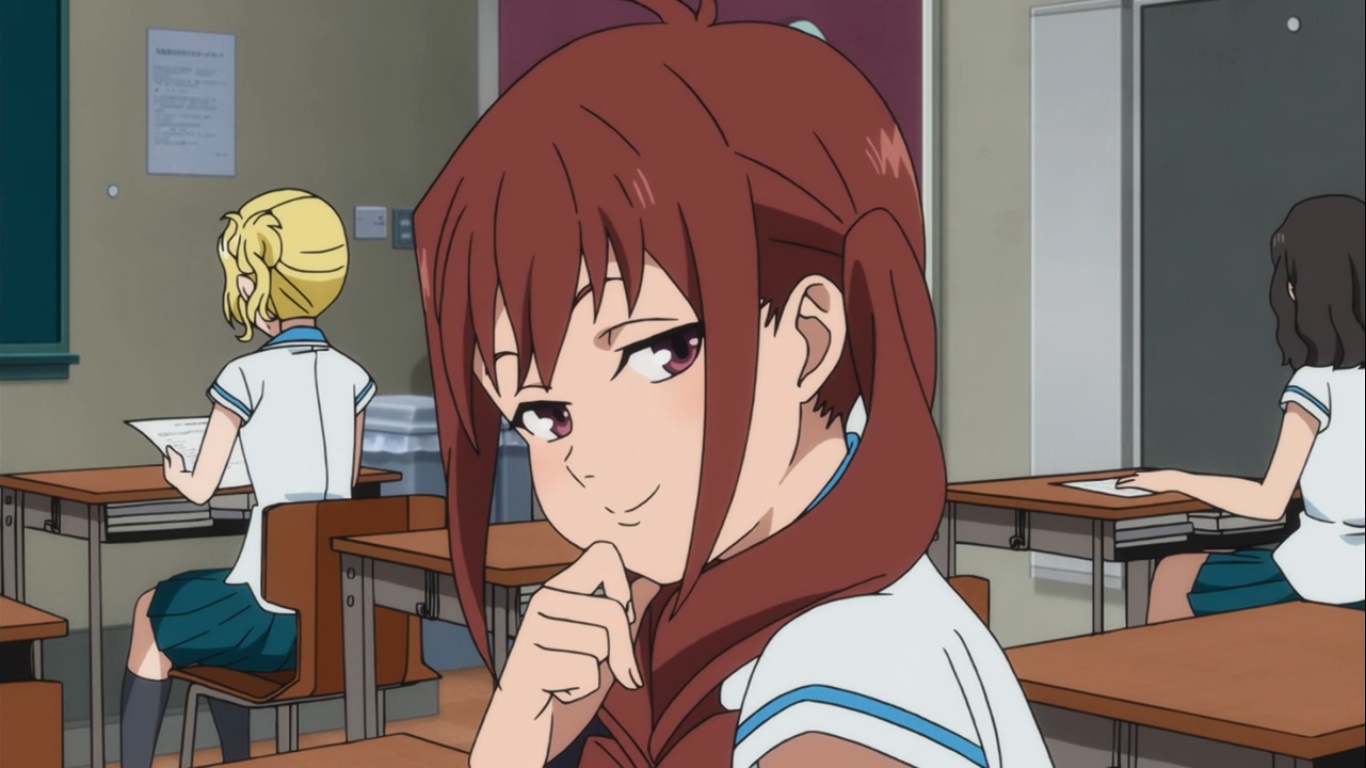 There are of course also a lot of other characters and most of them are quite likable, but I wanted to focus on those two because they are the most important ones, being the main characters and all. Aside from those, there are the other mech pilots like Tom Borden, who swears a lot but is kinda fun, Sophie Noelle, who is a rich girl with a cool butler who also pilots her mech alongside her and some other people. There are also Yukina's classmates, which include the only characters in the show that I actually don't particularly care for but still enjoy watching to some extent, like Kayahara, who I call the "modern Youtuber" because he'd charge into a fight just to stream it no matter how dangerous it is, if it just gets him views. Some of her classmates are very likable to me as well though, like Mika, who is Yukina's best friend. She's the girl pictured above.

Characters aside, what I also like a lot about this show are the fights. While it is CGI for the mechs and a lot of the mech designs aren't particularly amazing (though I do like the Kuromukuro a lot), the fights are usually very well-choreographed and fun to watch. They definitely aren't the main focus, since there are a lot of episodes that don't have any at all (some of them also being focused entirely on the group having fun), but when they happen, they're usually really good. As someone who likes swords a lot, this show has scratched a particular itch of mine, because it does have a lot of sword-fighting, what with the whole samurai theme and everything. The Kuromukuro usually fights with a sword, the enemy mechs often do as well and Kennosuke also has moments where he's outside his mech and still fights other, smaller, mech enemies or human enemies with his sword. He's very good with that and they're good at keeping those fights strong, no matter what they're performed in. They're not the most amazing fights you'll ever see, but I imagine you would be able to get enjoyment out of them if you're into that stuff at all. 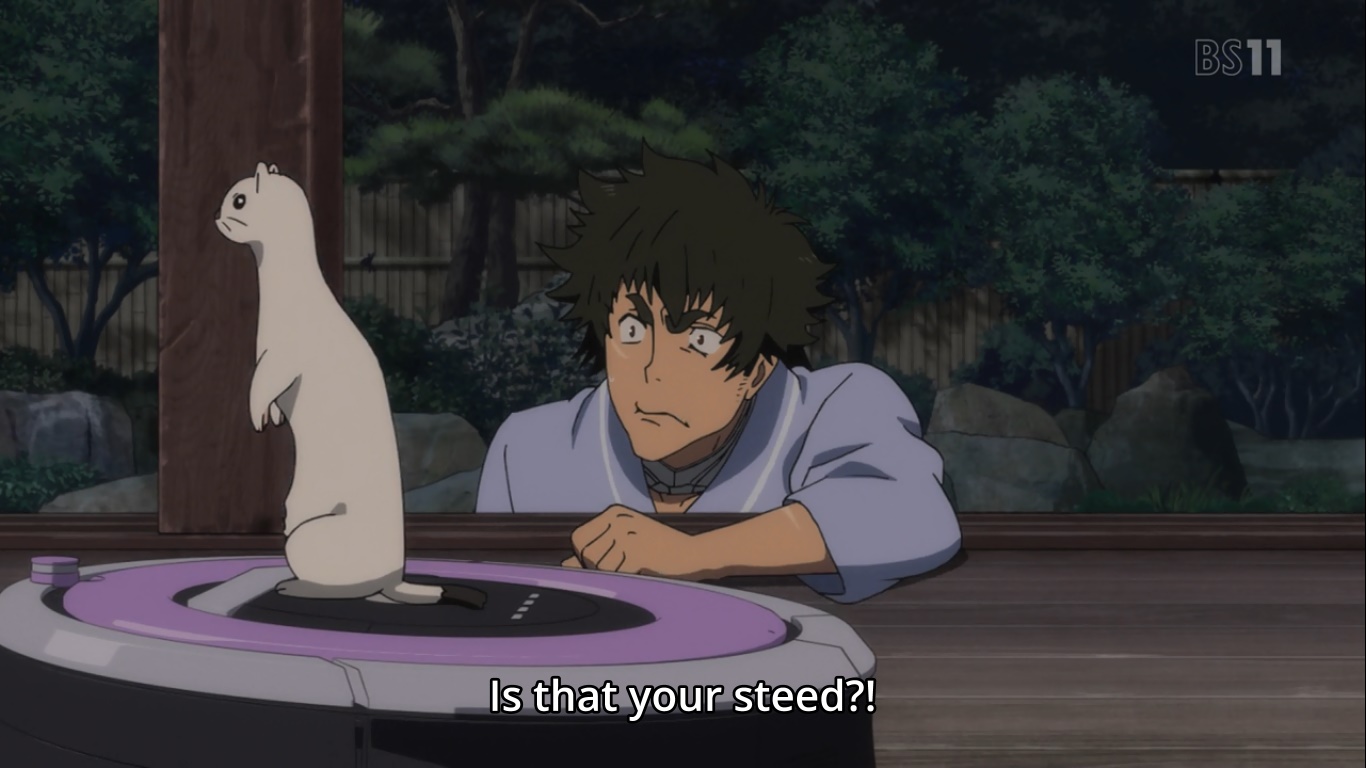 The soundtrack, while not very distinctive in a way that will have you remembering the melodies for days to come, does its job of amplifying whatever scene it's used in very well and usually enhances the scenes quite a bit. It doesn't have much in terms of earworm factor, but it works very well for the show and what it wants to do and I even find it to be a good thing to listen to outside of the show itself. I use it somewhat regularly for Overwatch and it has provided me with many good "soundtrack moments". It's not the most amazing soundtrack you'll ever hear for sure, but it's powerful enough that it deserves some commendation. I even ended up buying it on a whim and I don't really do that often, so it gets a pass! I uploaded one of the songs here, in case you'd like a little sample of what to expect.

Overall, I really like this show a lot as you might've been able to tell from what I said so far and I hope that some of you might be able to enjoy it as well! Here's a little official trailer that was made back when they put the first half of it on Netflix if you want to watch one:

So, have any of you already seen the show or have gotten interested in it through my little blog here? Let me know what you think if you do end up watching it or have already done so!

As always, feedback for my blog is greatly appreciated. Thank you very much for reading!

A giant robot loving guy from Switzerland. Gundam, Macross, MGS and Ace Attorney are great. Some other things are as well. Too lazy to write new stuff here, but I'm sure you can always find out more about me!