Cleanup on Planet 9 : Diaries of a Spaceport Janitor Review 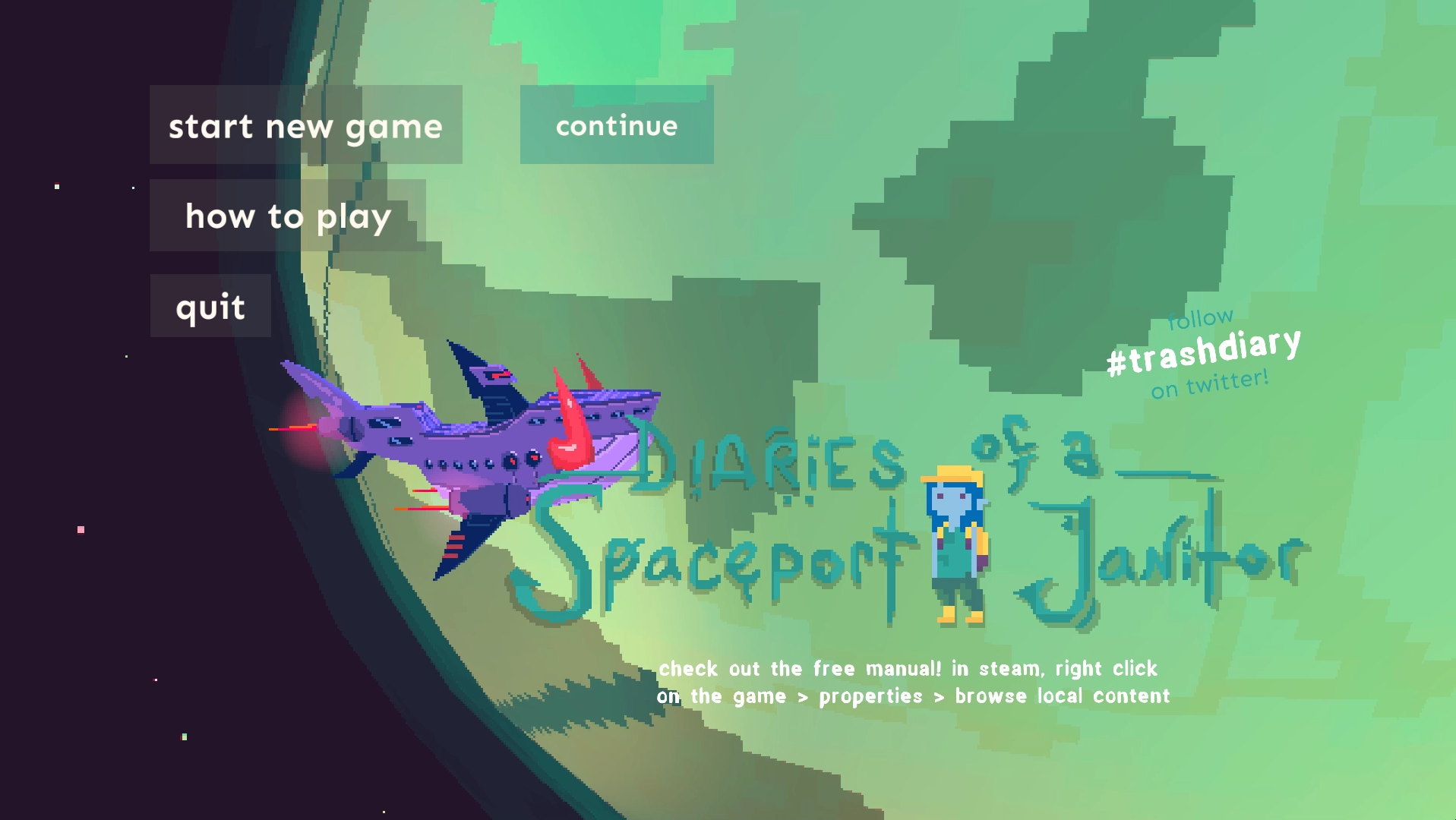 Have you ever been stuck in a rut, doing the same thing day after day, and you think to yourself “What does all of this mean? What am I doing here? Where am I going?” Well you can live out that existential crisis in video game form with Diaries of a Spaceport Janitor, an “Anti-RPG” by Sundae Month. In Diaries of a Spaceport Janitor you play as an “Alaensee Girlbeast” janitor whose job it is to keep the local spaceport free of trash. Clean, eat, sleep, wake up, get paid and do it all over again the next day, and the day after that. It isn’t all mops and melancholy though, during an adventure into the sewer dungeons of the city you become cursed with a floating skull that serves as your constant and annoying spectral companion. Wishing to remove the curse you set of on your quest to free yourself from the curse and your dull life as a janitor.

Though the overall goal is to get off world and break the curse, the essential day to day routine is collecting and incinerating trash using your portable trash burner. You travel around the various districts of the city while picking up everything from dirty newspapers to last year’s clearly inferior model of laser sword and disposing of it to earn money to spend on food and story critical items. Burning trash depletes your total energy reserve and when it runs out you can no longer incinerate trash and must return home to recharge overnight. When you wake up you collect your earnings from the day prior and begin a new day of cleaning. You can also earn money by selling the items you pick up if you keep them instead of burning them. Most everything can be sold to the right buyer, and if you are particularly lucky you can make some decent money selling discarded wares. Occasionally, you can find Municipal Credit Chips (the games currency) lying around on the ground for a few spare credits as well. 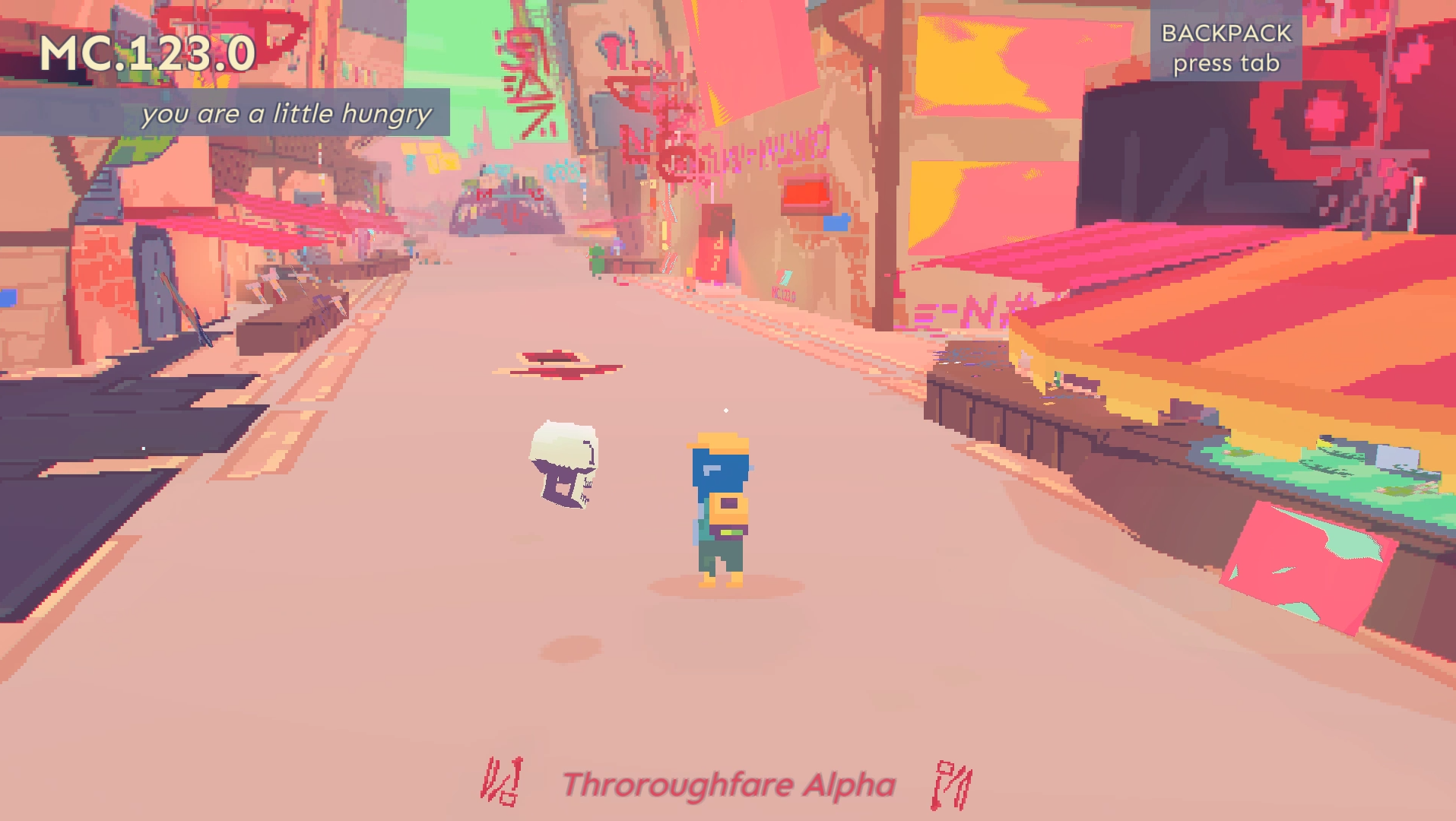 Just like everyone else in this alien world you must feed yourself from time to time and occasionally “gender-shift” when you begin feeling uncomfortable in your own skin, represented by the screen beginning to glitch out and warp. Both of these cost credits of course and a decent amount of them too, which usually means you are only left with a small sum of credits from the day’s pay. To make things worse, the roving groups of “Red-Scarves” (so named for the red scarves they wear, who knew) will eat your credits if you get too close, usually severely depleting your account.

The missions that progress the story line revolve around collecting or purchasing items for certain characters so they will help you out in return. In order to get these items, you really just go about your daily tasks and either try to purchase them outright, hope to find them scattered on the ground, or get them as a random drop from the “Lottoshrines” spread across the spaceport districts. Luck is a major mechanic in Diaries, and seems to determine your ability to progress through the game. Certain actions will decrease your luck while others (such as praying at shrines to the goddesses) will increase your luck score, and depending on this score you may or may not get something useful from the Lottoshrines. This is especially apparent towards the end of the game where the cost of the items needed are so high that you have to just roll the dice and hope that you get the item for free. And that’s essentially it for how the game works. Wake up, clean, eat, and hope the next day gets you a little bit closer to your objective. 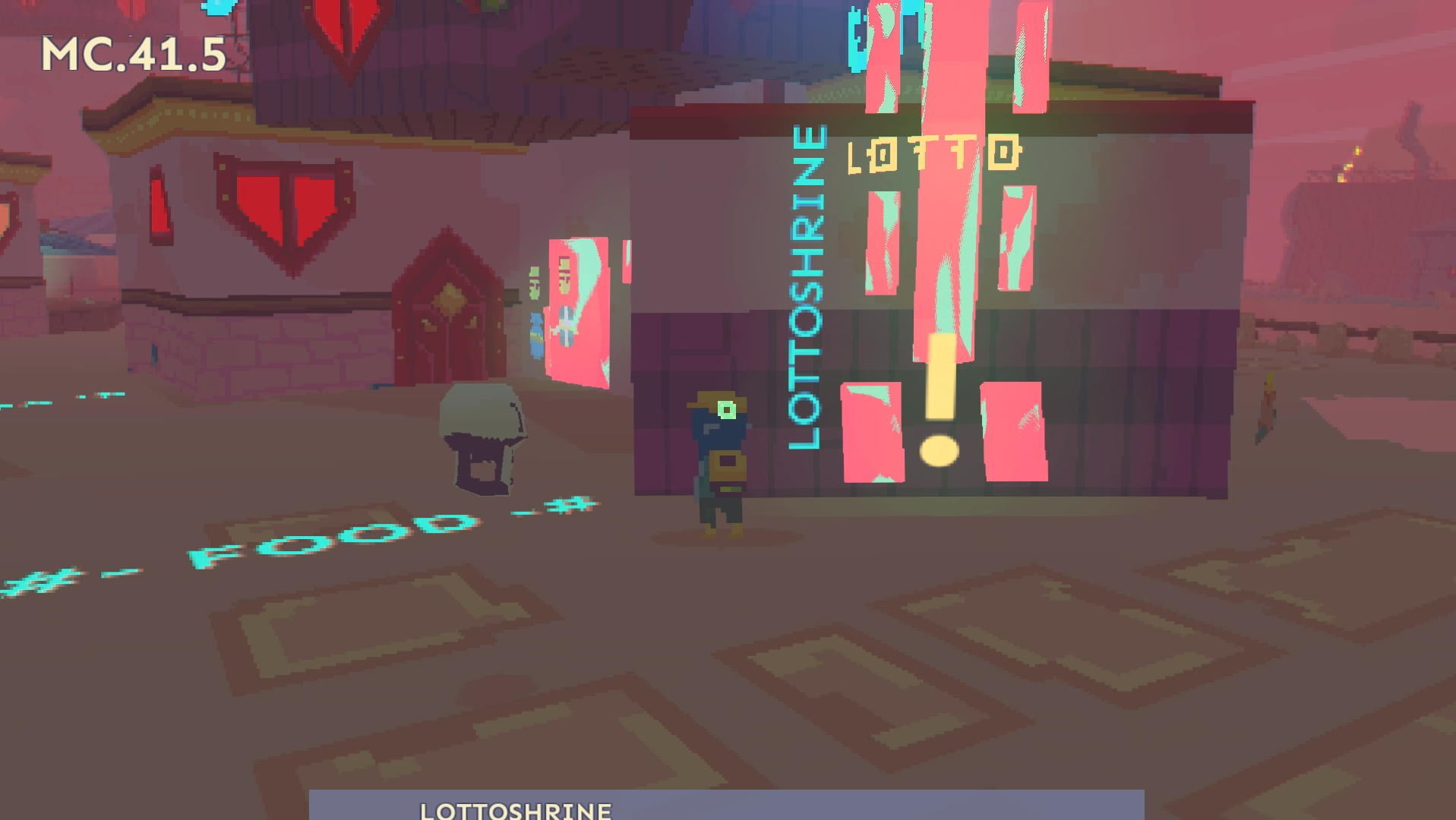 Diaries of a Spaceport Janitor uses a pleasing mixture of 2D pixel art characters and a 3D world you navigate through, similar to the style of Paper Mario. The alien bazaar is absolutely packed with weird and interesting creatures and when combined with the neon lights covering most buildings and the bright and vibrant colors of the world and merchant stalls one is quickly visually overwhelmed by it all. You can quickly become lost early in your play through of the game, but once you have acclimated yourself to the scenery it becomes much easier to manage. Despite the overload of things to look at, the critical elements to gameplay are fairly well marked out for the most part. Important characters to the plot are pointed out by both a large arrow over their heads and a tracking arrow at your feet that activates when you get close enough to them. Food Kiosks, Lottoshrines, and Gender-Shift Booths have distinct signage that helps separate them from the background. The city itself feels like a living, breathing city complete with occasional festivals that bring live music and partying to the streets. One of my favorite design elements is the aquatic theme applied to the vehicles around the spaceport. Manta ray and whale ships zoom across the sky while horseshoe crab-shaped buses meander through the streets. 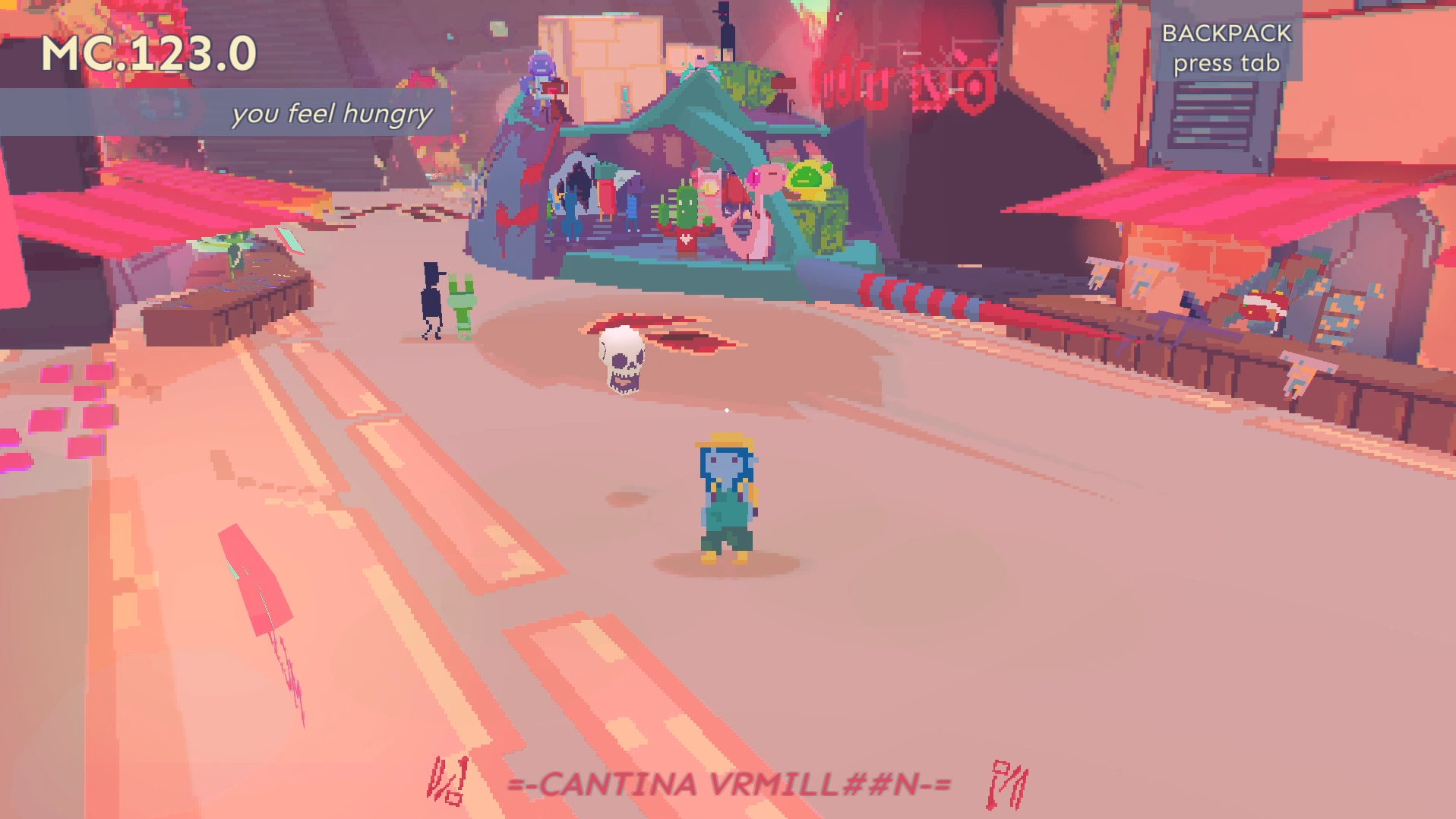 Much like the video element of Diaries the Audio will overload your senses at first as well. The sounds of unknown meats sizzling on griddles, unintelligible conversations between alien creatures, squeaks and blubs, and an array of beeps, boops, and buzzers. This doesn’t even include the in-game music and the cursed skull that screams at you ever once and awhile that adds to the wild soundscape of the game. Once you get used to it and start to figure out what makes which sound, you will find that there actually are sound cues for status effects like gaining/losing luck, though this feature is not introduced to the character and you have to kind of just figure it out on your own. The in-game music sounds both futuristic and familiar and is always befitting of the kind of music one would expect to hear at a distant alien market. It is fun to take a break from the drudgery of the day and just stop and listen to the songs that the alien bands are playing in alleys and street corners, even more so during the festivals when the happiness and cheer of the celebration really comes through in the music. 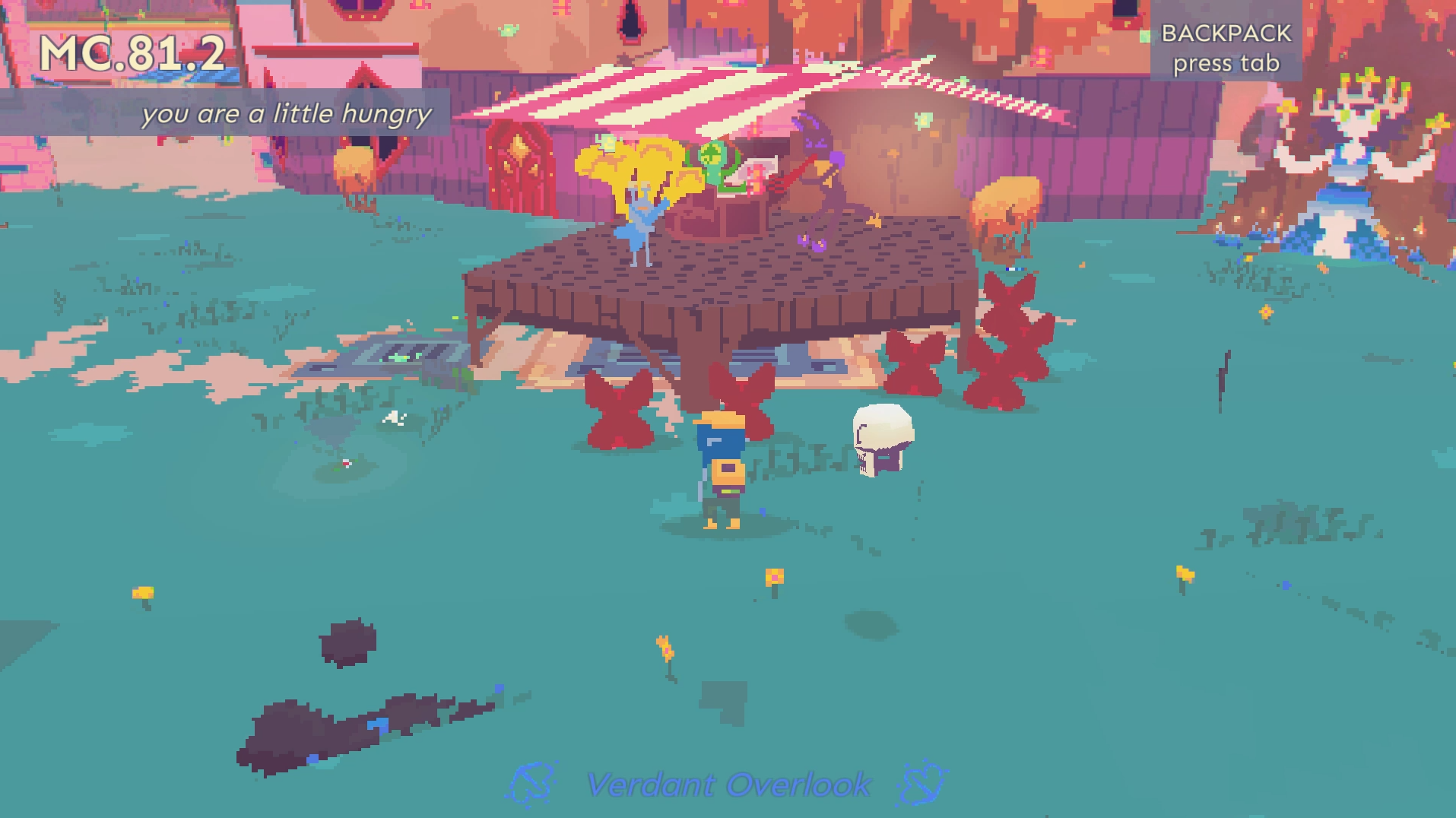 I think it is worth saying that Diaries of a Spaceport Janitor is less of game and more of an experience. Playing the game you feel the struggles of never having enough money and just barely scrapping by no matter how hard you work or how much you try to break free from the routine. How easy it is to fall into a routine while waiting on something better to come along. Desperately hoping for the next day to be better to you than the last. Not feeling comfortable in your own skin and with who you are. To feel better about your day to day life you make little goals to achieve so you can feel like you are making some kind of progress in your life. In the end though you just have to keep soldiering on and hope for the best, one day at a time. If that doesn’t make you have to pause the game, make some tea, and sit and ponder upon your own life for a bit from how meta that is, I don’t know what will. This will hit some harder than others, and it worth mentioning that there is a (mild) content warning at the bottom of the steam page in regards to gender dysphoria, poverty, and other topics.  All of this leads me to believe that the cons listed above may be intentional features as a more meta aspect of the experience. 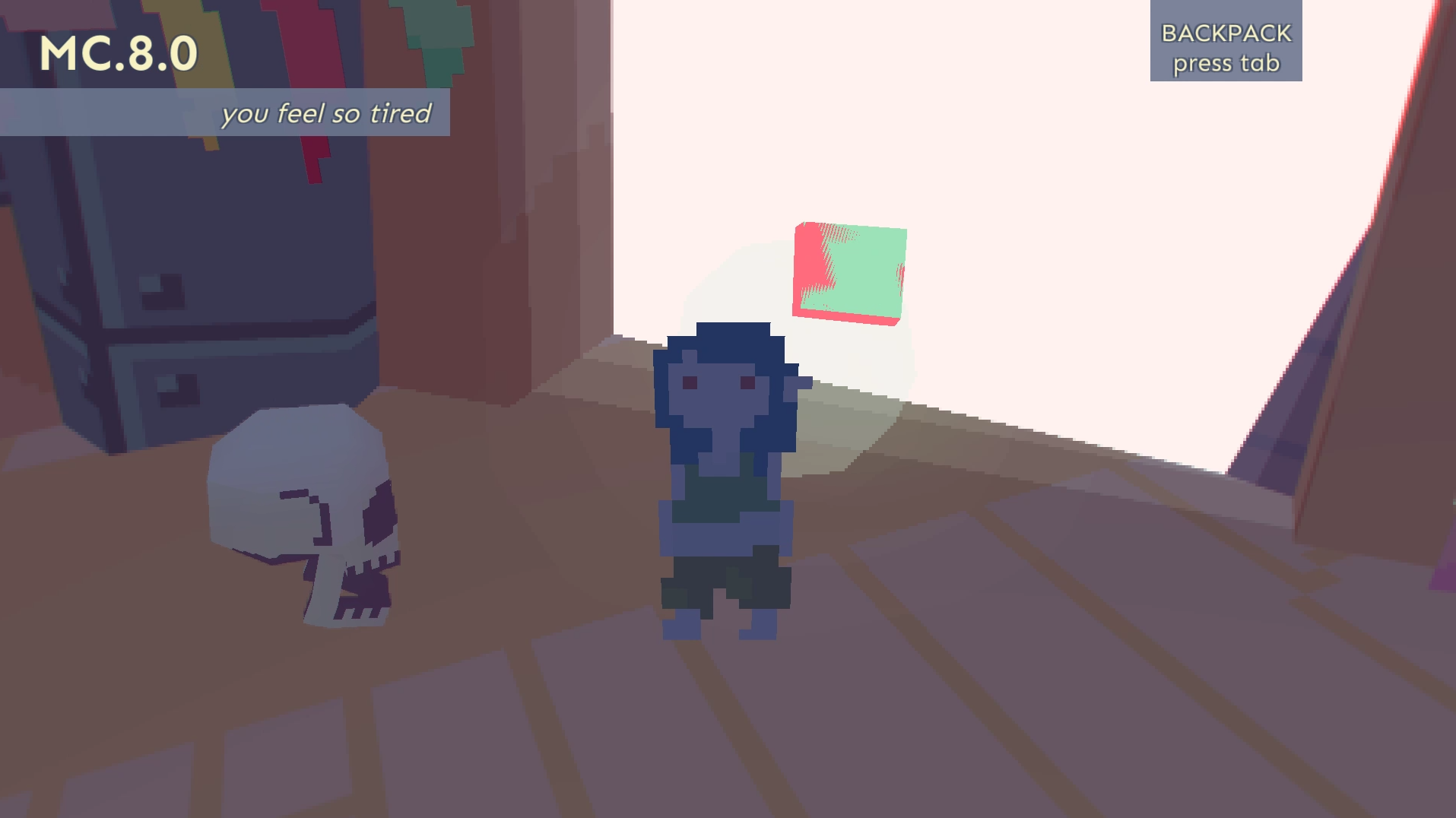