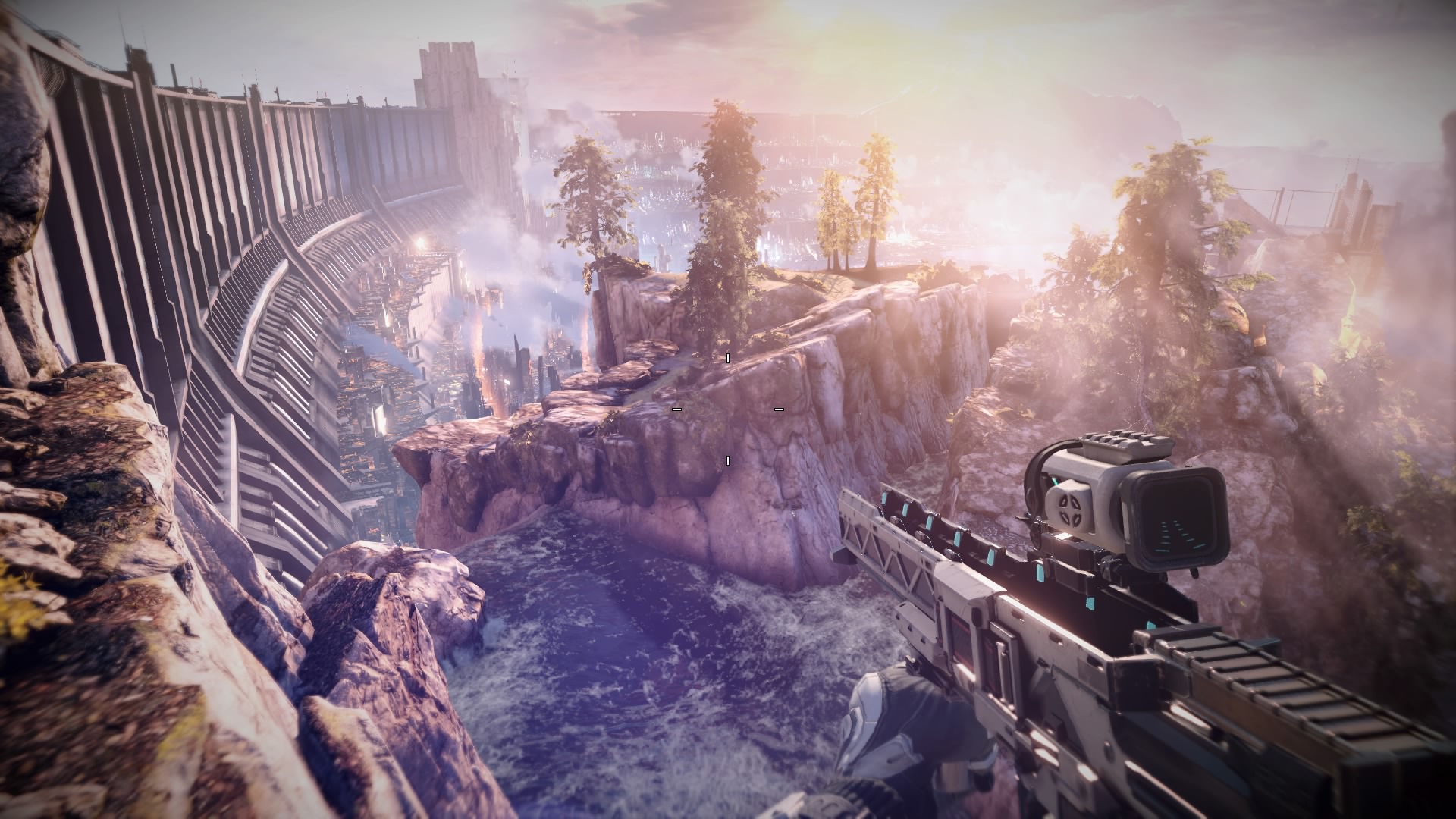 “Clean this up. No traces. Do what you do best” Sinclair says. From playing the first half hour of the game, you know he’s your father figure. He’s not asking you to wash the dishes, though, he’s asking you to take down a train full of terrorists. For a moment, he starts talking about diplomacy, but your character interrupts him: “Since when did we start relying on politicians?”. Sinclair pauses, then responds: “That’s my boy”. They are not joking.

The train has screens everywhere, in which a gesticulating, theatrical, capital T Terrorist, live from what looks like a cave, yells very loudly about how many Helghast mothers and sons died because of humans -sorry, Vektans. He could be quoting Ghandi or Martin Luther King, he would still sound annoyingly evil. I can’t even begin to imagine what Helghast mothers or sons look like. Their name is a portmanteau of “Hell” and “aghast”. They look like Darth Vader with an amber traffic light under his mask. At one point, you find some Hellaghast civilians who are not wearing Darth Vader costumes. They are pale, starving, oppressed, and… wearing Hitler Youth costumes. At another point you meet a Helghast who doesn’t look gross and isn’t comically evil. Turns out she’s half human. Later, she will say stuff like “All you’re doing is helping breed a new generation of extremists!”.

You can pick up audiologs throughout the game where you can hear stuff like a man’s screams in the last minutes of his life, when, after being exposed to a deadly poison, he rewinds a single message from his wife and daugher until the pain overcomes him. The recording only ends after his last breath. You can tell. You can walk over his calcified body.

Everybody yells all the time. Helghast troops yell to one another. NPCs constantly yell at you what to do. Villains regularly hijack your comms or yell through the loudspeakers in the level to deliver some good old character development. I’ve played Killzone 2 and 3. I don’t remember what they were about. Hopefully, I soon won’t remember what this was about, either. 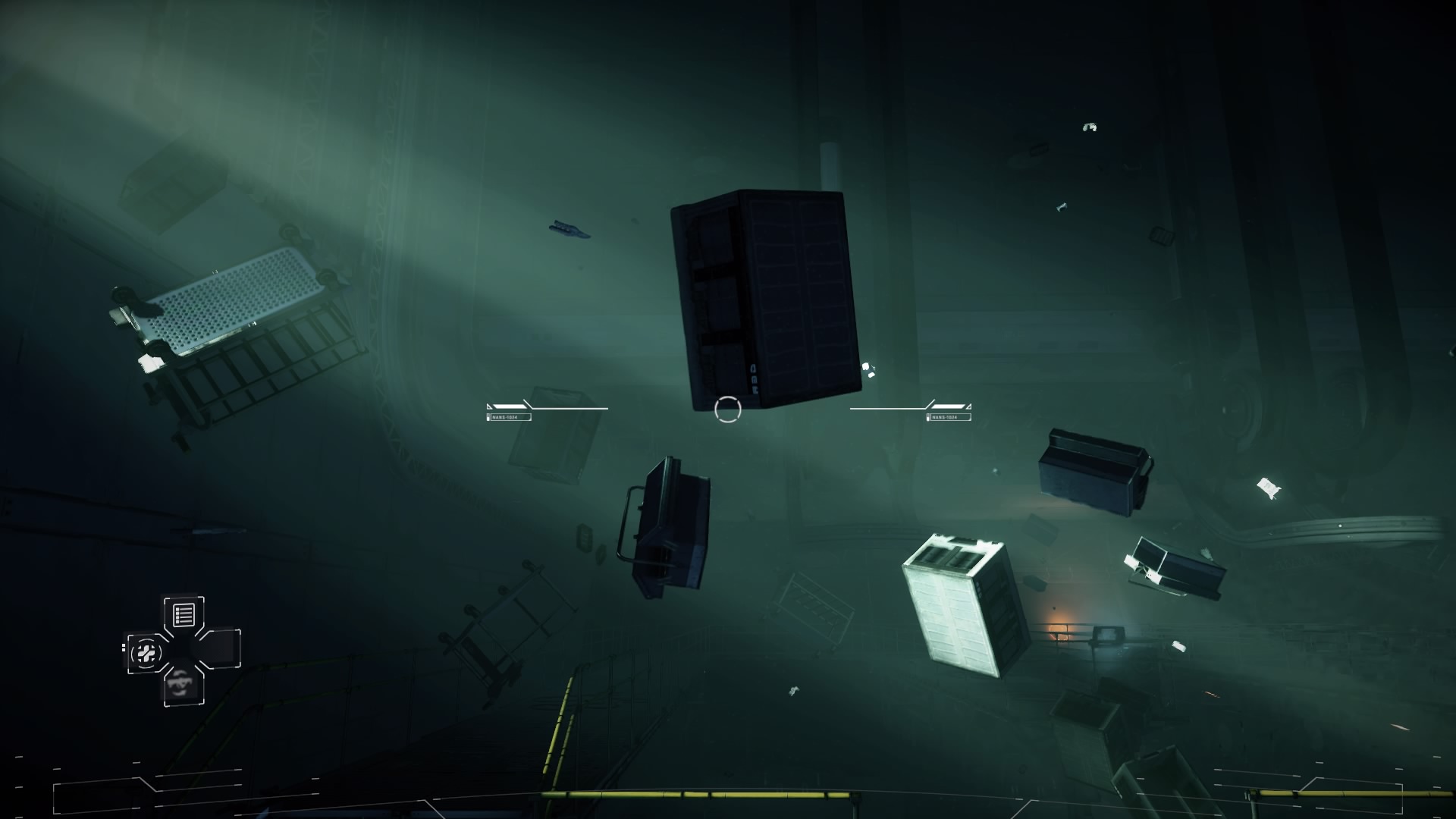 Your objective is always changing, and it is always of utmost importance. If only you can unlock that door, clear that room, get across that checkpoint, hack that terminal, everything will be solved. You do it, and it’s not, but there’s this other thing. It’s A then B then C then D. One objective, one way to get to it. Stealth is more like window dressing than a legitimate form of play. In more occasions than I can count, the first thing you find in a new area is an enemy with their back turned on you, so you can stab them in the throat. By how the levels and stealth systems are designed, chances are the second or third dude you stab in the throat will alert everybody in the room. There is only two levels of alertness, you see: Not alert (waiting to be stabbed in the throat) and alert (instant, endless, perfect GPS track on the player). They also have a “huh? anyone there?” state but it’s barely worth mentioning.

If there is some relation of cause and effect between missions, I can’t pick up on it. They feel, quite honestly, like they were developed separately with a vague outline and then stitched together at the end, and they vary widely in quality. Changing only cutscenes, chapter 2 could just as easily be chapter 8. 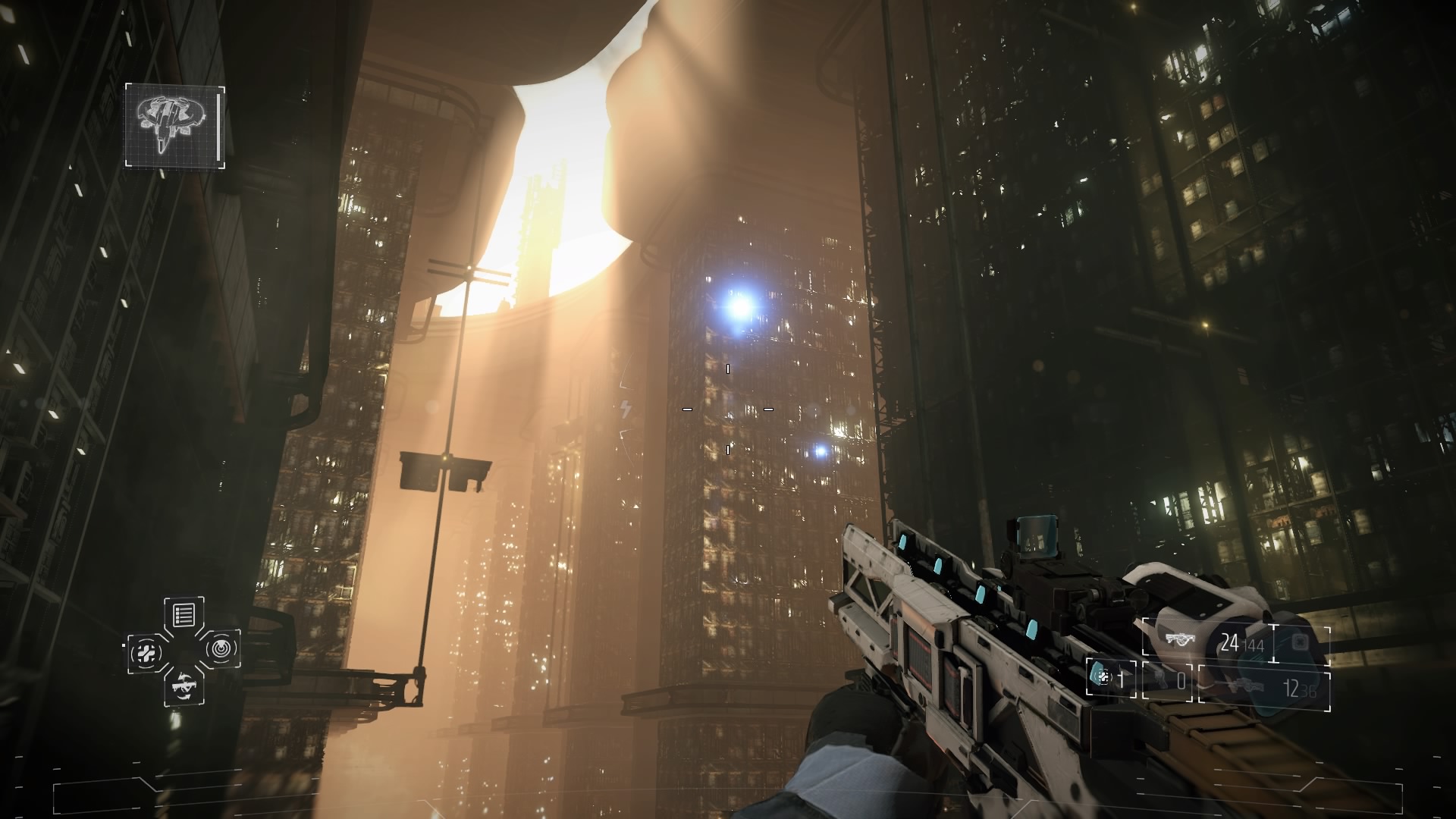 Like any self-respecting Triple A Title, Killzone: Shadow Fall Starts with a bang. Well, a boring tutorial first, but then a bang! There’s a skyscraper, -pink, sky blue, even some green!- a big wall cutting a city in half, and a terrorist attack. The majority of areas in the game do not look this good. They also aren’t as interesting. Half the levels are fairly generic high tech office/station/warehouse spaces with Helghast waiting to be shot. This is disappointing. Between them, there are a few really inventive areas that can be moody and awe-inspiring. Sadly, the combat works best in the boring areas and is kinda broken in the interesting ones.

The AI is relatively smart ~in a basketball-court sized area; they try to flank you, stay away from grenades, and the ones with shields are more likely to rush you. The moment an environment gets even a little bit interesting in terms of scale or geometry, however, the cracks in the combat system and AI start to show. When you clear one room, walk a bit, and find another room full of enemies, it sort of makes sense. When that happens in an open area; you kill some dudes, walk a bit, and find more dudes, it doesn’t make as much sense. Why wouldn’t all enemies be in high alert the moment you shoot one dude in an open area? The answer, of course, is that their alert system is basic as fuck, so it would mean all the enemies in the level finding you and killing you instantly. 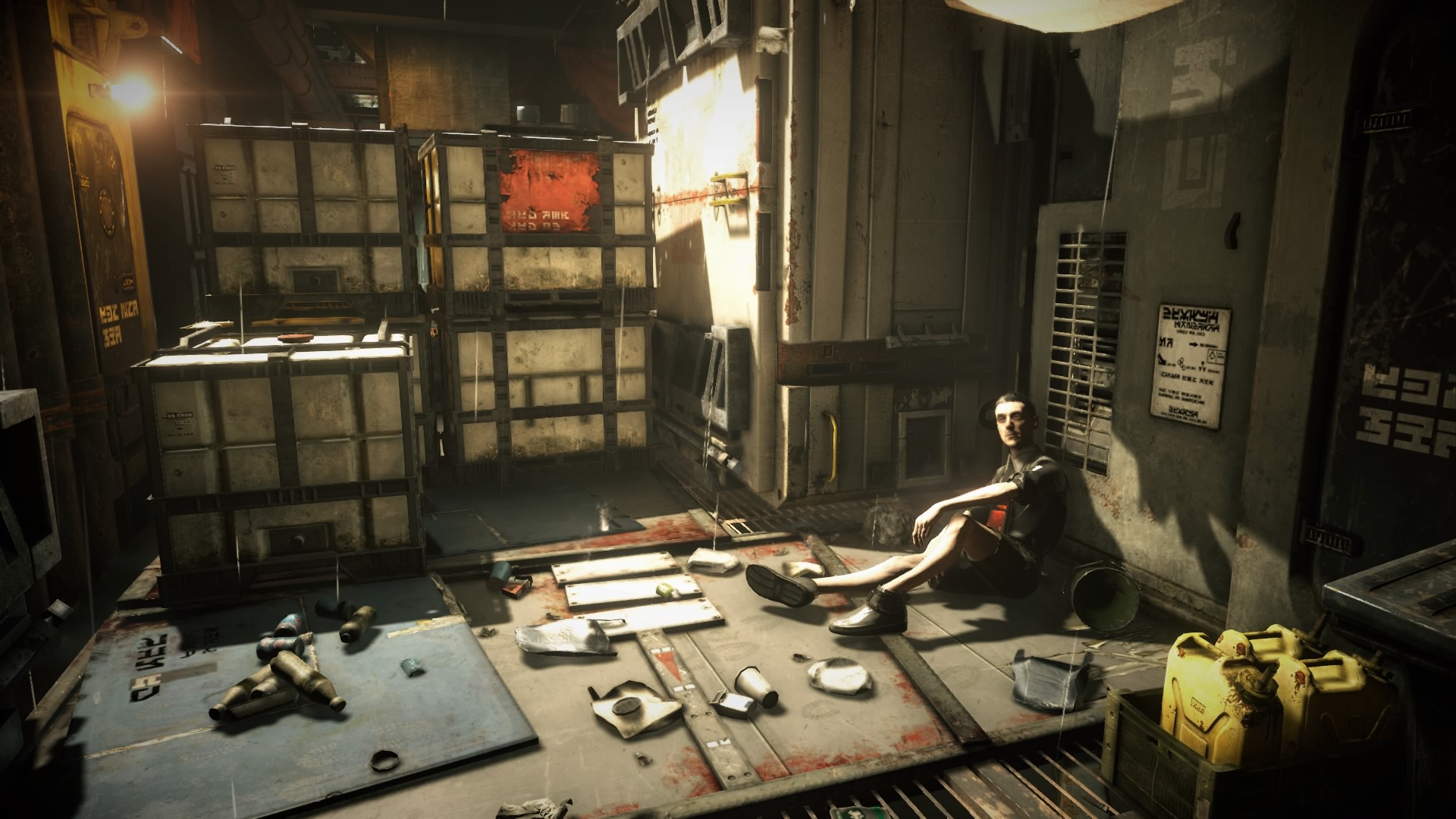 Side note: Usually, between levels, or in the middle of them, there’s the bunch of barely interactive wait-a-thons that have sadly come to be expected in this genre; you have your sniper section, turret section, a few helicopter sections, torture scene… it really runs the full gamut of worthless interludes.

Here’s the thing, navigation alone is quite interesting in some of these levels! I can’t remember the last FPS I played where crouching and jumping were actually useful parts of traversal. In the good levels, it’s not even mandatory, it can just give you a vantage point from which to approach combat or avoid it altogether. The way forward isn’t always obvious and signposted, either. It can be tricky, and it wants the player to pay more attention to their surroundings. The game is confident enough to make you go through a vent or grapple over to an area without explicitly telling you that is the next thing to do. I think that’s cool. It’s a shame, then, that your movement capabilities are so limited. 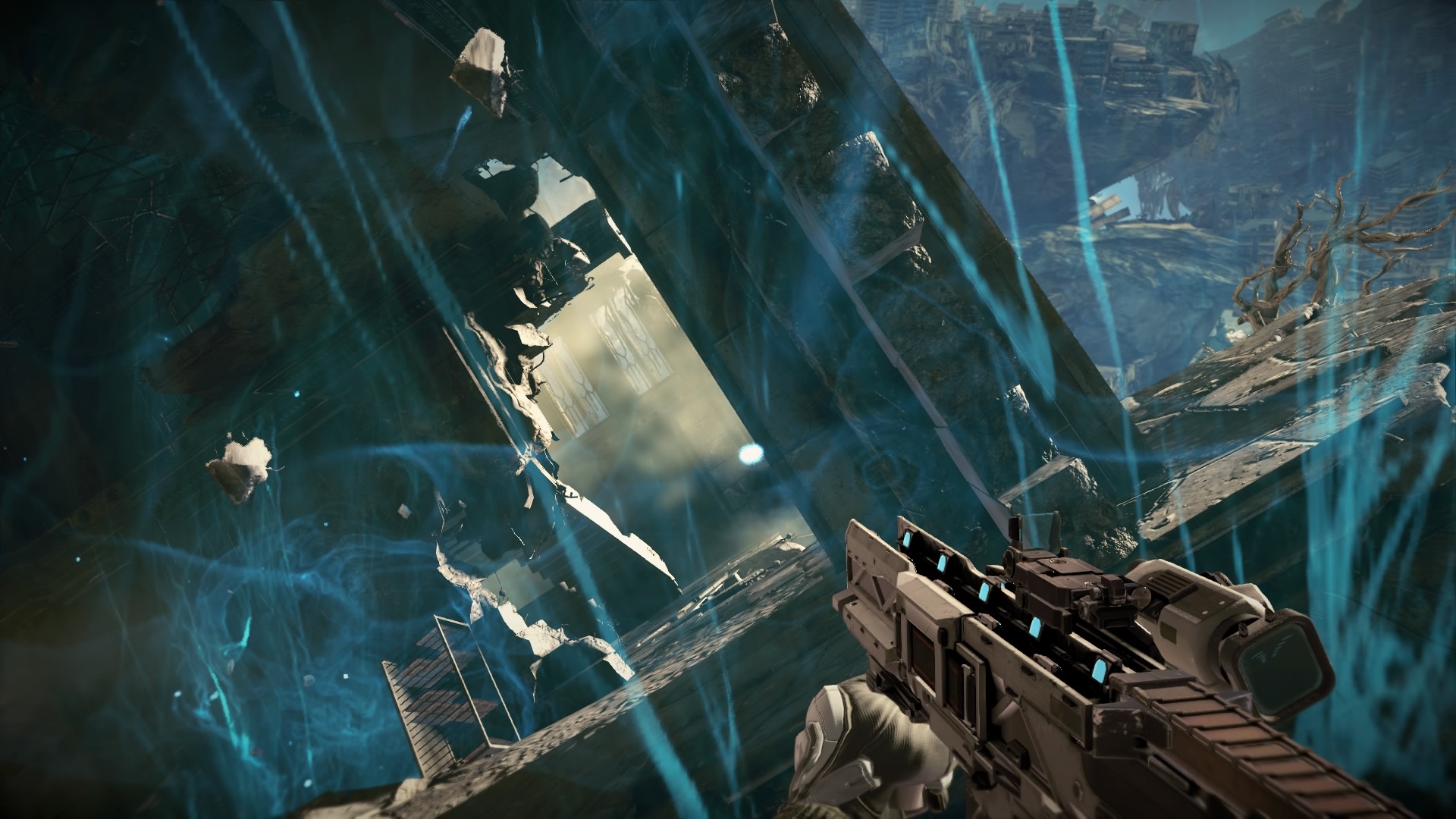 You control a man who can sprint real fast and dramatically stab dudes in the throat from at least 9 angles, yet he can’t jump more than three feet away. You have a drone that, among other things, can deploy a rope so you can reach far away areas, yet it only really has a use when there is a very obvious pit between the player and the objective. You can be in an area that rewards you for thinking creatively about positioning and possibility space and, minutes later, in an area filled with un-climbable hip-level obstacles.

Another one of the drone’s abilities scans the area and outlines the enemies in the player’s vicinity. It’s Batman, Asscreed vision, you know the one. The reason behind it is clear, the game is dark and full of shadows. It has lots of color, lighting and particle effects, and amazing looking vistas, but they tend to be in the background, to the sidelines and not in the immediate place of action. That place is usually pretty black, much like the enemies, and when it gets bigger than a tennis court you really have no idea where you’re getting shot from.

Because waiting behind cover is boring, the rest of the drone’s abilities are preservatives so the player can go out guns blazing and stay alive; slow motion, EMP blast, body-size shield, even bringing the player back to life after they get killed. In hard mode, which is what I played, these abilities have to be used wisely, and there were genuine moments where I felt the illusion of mastery, sending the drone forward to distract a couple of guys, throwing a grenade at another group and dealing face to face with the guy that was trying to flank me. It was rare. Generally, success is more about finding a not-very-exposed corner to begin the fight in than anything else. 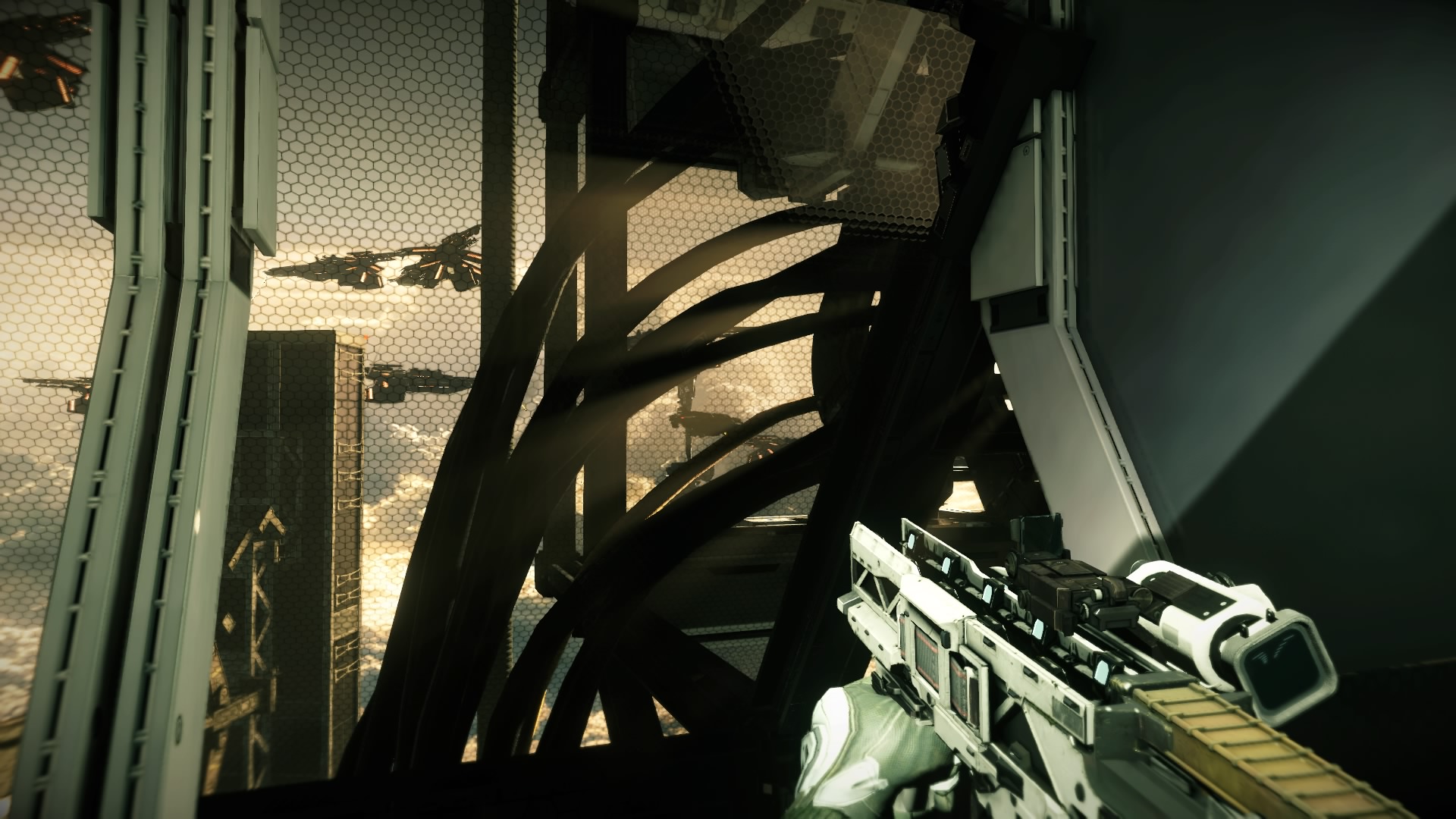 There are some odd decisions in terms of inventory. There's no unlockables or upgrade system, which is great, but for some reason you are forced to carry the rifle you start with throughout the game, even though there's a variety of better weapons available. In practice, this means you are less likely to experiment with short use weapons like missile launchers or gatling guns, because it means dropping a shotgun or any above average gun. Another reason why stealth isn't really an option is that you only get a silenced gun in the obligatory stealth section; you can keep it for the rest of the level but that's about it.

The average encounter in Killzone: Shadow Fall starts with the aforementioned throat stabbing, then alert, everyone takes cover, drone scanning ability, try to shoot all the (now) bright orange dudes. If the screen gets all red, wait behind cover a few seconds, then resume shooting. If you fail for some reason and reinforcements come, or if you’re close to the end of the game, you might use the slow motion ability or pop a shield to deal with more enemies at once. Very rarely are you required to move or even really use your abilities (I didn’t use a shield until the last level). Then, when the punchy IDM soundtrack calms down, stock up on drone drugs and head for the next area. You can do this in a box, you can do this with a fox, it really doesn’t change much at all. 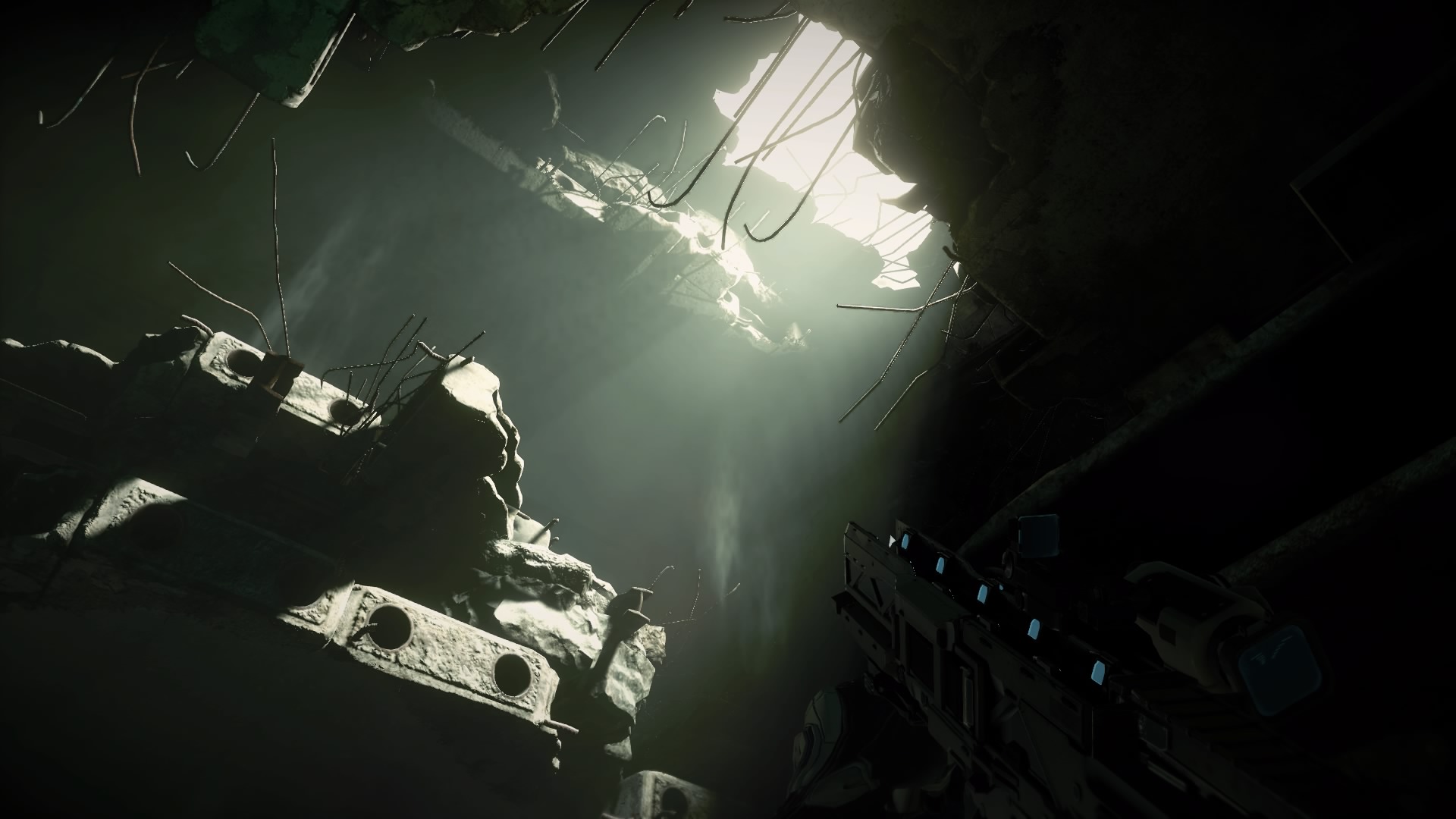 Some of the more awe-inspiring levels have you blowing up robots via dumb little puzzles, or doing incredibly awkward first person platforming. The activities themselves are awful, they don’t fit the world or systems of Killzone, but the moments they bring about are what keeps it from being completely forgettable. The additions to the combat system are just fine, but it really doesn’t feel like that was the developer’s focus. It is screaming for more verticality, more agility, maybe even less shooting. Things that would make it stop being Killzone. Like a teenager too in love to care about class, it feels like Guerrilla had their heads somewhere else. Fine by me. Here’s to new horizons.