How Fun Is Warhammer 40K Kill Team? A Repost Of A FB Post!

3:50 PM on 09.20.2016 (server time)    0
So today I played my first match of GW KT (not HoR KT) with a friend who's dead-set against unofficial rules, yet knows that 40K rules in general have the same amount of balance and thought as a wet napkin. 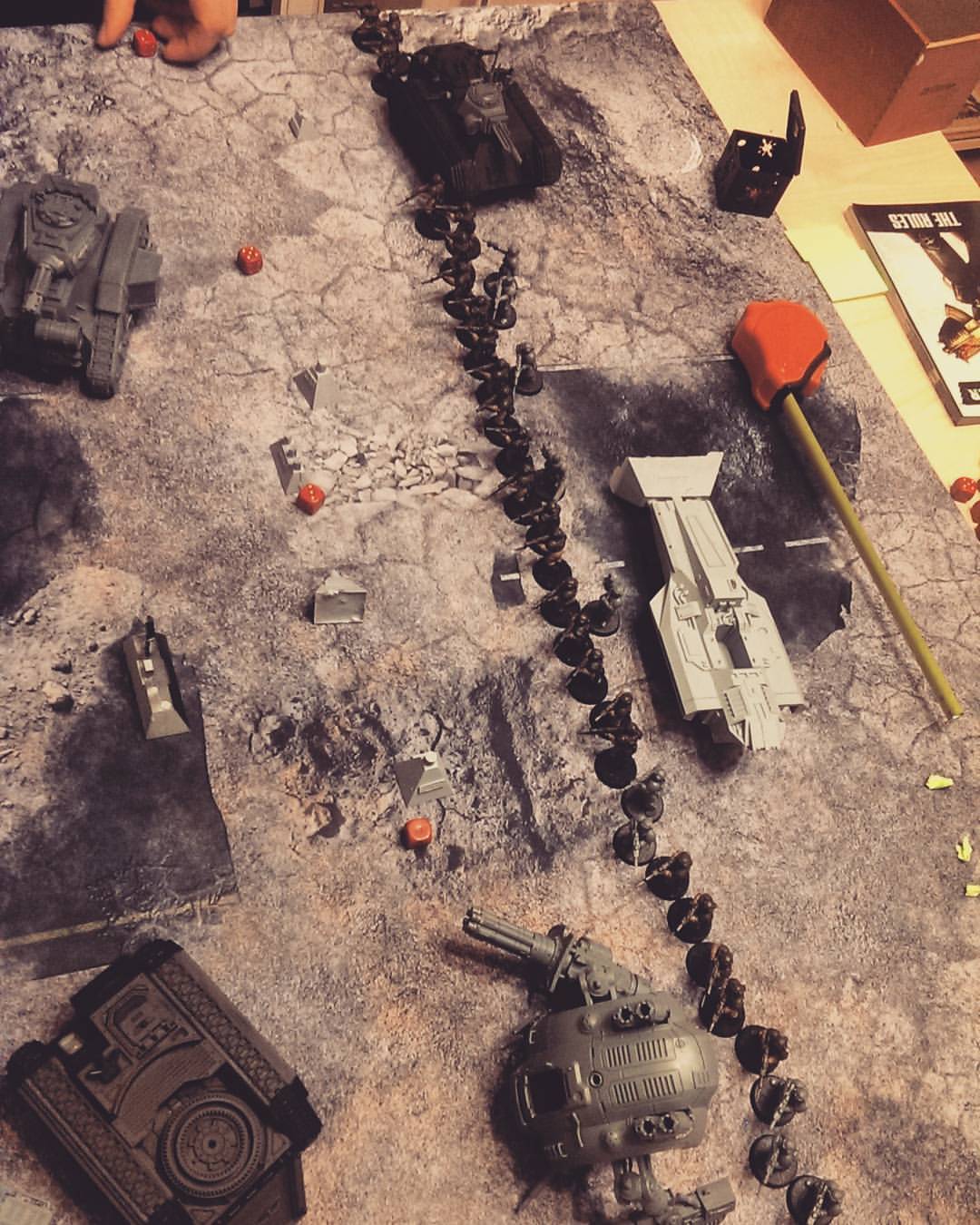 WHAT DO WE DO NOW

Anyways!
He only had guardsmen, so I ran two squads of Carapace Vets. Two plasmas (one extended range), two sniper rifles (one relentless that turned into Prefered Enemy) and sarge with Bolter (FNP).
He ran PCS + 3 Squads with... 2? 3? Meltas. One was supermelta (extended range), one sarge had mortal blow and I forget the last one.
We played the breakthrough scenario, he eventually decided to be the attacker.
Highlights:
Deciding how to move and then run a 35-dude line of individual Guardsmen.
My first turn of shooting (BS4!) (19 shots) resulted in one Gets Hot! and one dead enemy Sarge. My friend was surprised when he remembered that Guardsmen actually have armor saves.
One of my favorite and more flavorful moments were when two of my Vets charged out and threw grenades, hitting 8 (killing two) and 5 (killing) respectively. We ruled it that you only get one grenade throw per pre-game squad, otherwise it would have gotten silly.
One of his guardsmen charged my Vet and they got locked in combat. In my turn, those guys killed each other.
At this point, it was getting late and we decided that he won. He would have, as the Guardsmen slapfight brought my 10th Guardsman down. 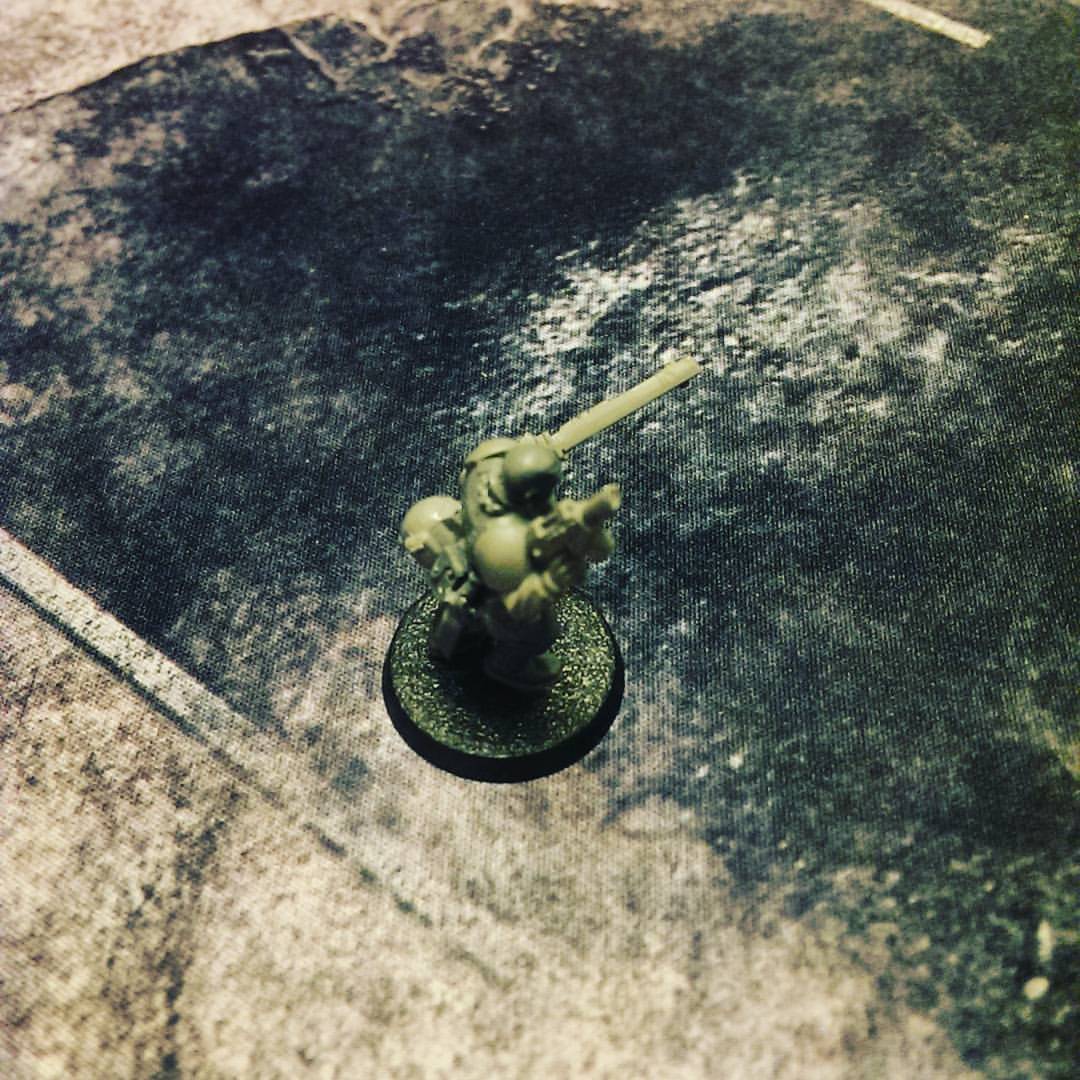 The one dood that was killed after my first turn of shooting
Closing thoughts:
It was fun, since I didn't have to think (and judging from sniper rifles, didn't think) about my choices. I have spent more time sweating over HoR lists than I actually played HoR, so it was kinda fun to get dudes on the table and roll.
Playing Guardsmen vs. Guardsmen made it easy, since we didn't need to know special rules or other BS. When 75% of dice rolls are 4+, it's easy to play.
GW could have made it better by clarifying stuff about conferring FNP or whatever, orders, Chapter Tactics, maybe splitting fire (I might have an HBolter in the future and I would like to maybe spread shots around instead of turning some guardsmen into very fine mist).
Commander traits are shiiiit just like warlord traits are shit. They didn't balance them, so they went "hey, if we make it a random roll they can't say it's unbalanced, because it's a random roll and they can' choose superior options." 1 VP if my commander slays his commander in a challenge? This is hot garbage. Put some more effort into it!
Overall, it's a good way to wean a person into HoR (but not into 40K TT, because 40K is terrible when it's over 500pts, and not that good even at 500pts). It's also great for early diagnosis of munchkinry and WAACness, since it's easy to notice Crisis Suits, Spawns, Wraiths or whatever on the table and smush their face in. I recommend running Marine vs. Marine, Guardsmen vs. Guardsmen and similar teams.
Login to vote this up!